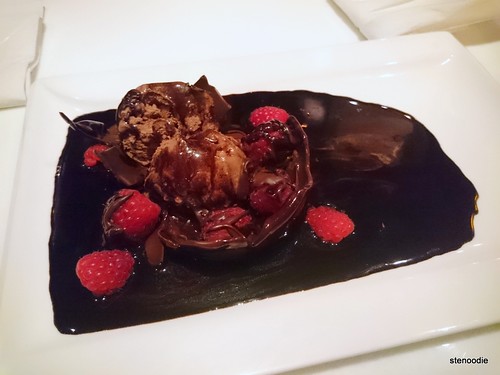 It’s pretty surprising that I’m only going to two Winterlicious restaurants this time around in 2015.  I’m learning not to go overboard with eating out and it just so happens that I was leaving to go to Miami and an all-inclusive cruise trip a week later anyway so I don’t want to indulge too much here in Toronto before I leave. 😛

Daphne and I made early reservations back in December once the Winterlicious menu came out and booked this lovely Friday night to chit chat and dine at Moroco Chocolat for our first Winterlicious dinner this season. 🙂 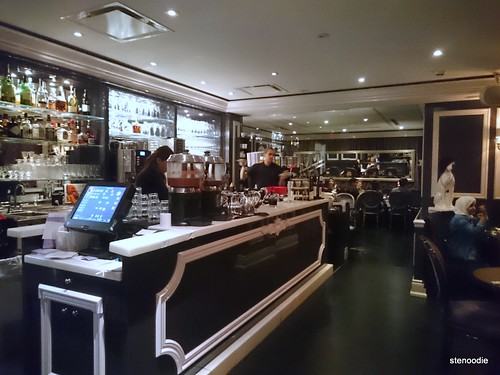 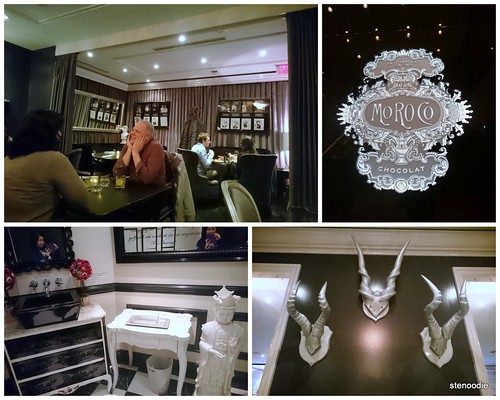 Their ladies restaurant is really nice too!

Moroco Chocolat is a restaurant that specializes in desserts, pastries — macarons — lunch, and afternoon teas.  It’s located in the heart of Yorkville, a chic and classy neighbourhood in the heart of downtown Toronto.

When you walk into the restaurant, you actually first step into their patisserie first where lots of sweets and macarons are displayed.

Daphne and I happened to halve our mains and desserts and we were able to share each other’s selections in this way.

First off, I started off with the Tuna Tartare.  It arrived with a small side salad that was raw and fresh.  The crostini was crispy and covered with a bit of garlic/butter that made the flavouring come alive.  The tuna tartare was mixed with avocado.  The flavour was so fresh!  This was really well made tuna tartare! 🙂 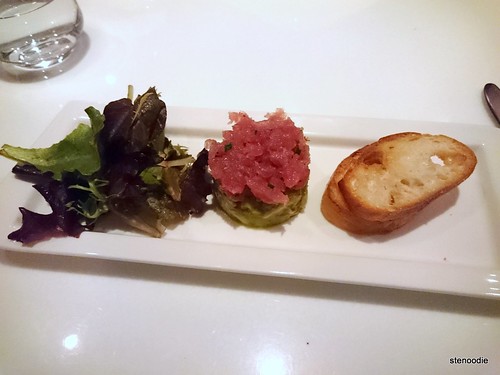 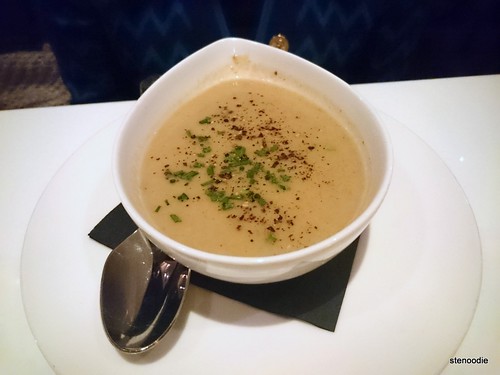 Daphne ordered the Daily Soup — cream of mushroom that she absolutely loved.  I took a tiny scoop to try and thought it was a bit watery and not creamy enough.  She was very impressed though!

For our mains, we shared the Truffled Mac and Cheese and the Artisan Beef Burger.

I’m usually not a huge fan of burgers at establishments like this but wanted to give it a try.  It came with thin sweet potato fries with spicy aioli sauce.  The first dipped fry took me by surprise as the sauce was supremely spicy but by the time I ate more, it was so delicious that I couldn’t get enough of it. 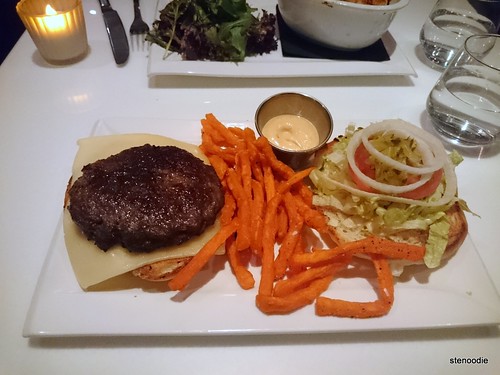 The artisan beef burger contained a thick patty that was so good!  We both agreed that the bun was a bit hard to bite through but I thoroughly enjoyed this burger!  Who would have known? 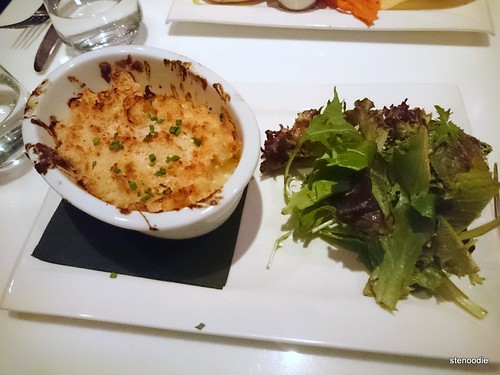 The Truffled Mac and Cheese arrived in a small hot dish and the same kind of fries that came with the tuna tartare.

The mac and cheese was crispy on the top and slightly creamy within.  It was good!  However, I’m glad that I got to share this with Daphne to try another dish as eating the mac and cheese alone would have been a bit boring — I like variety! 🙂 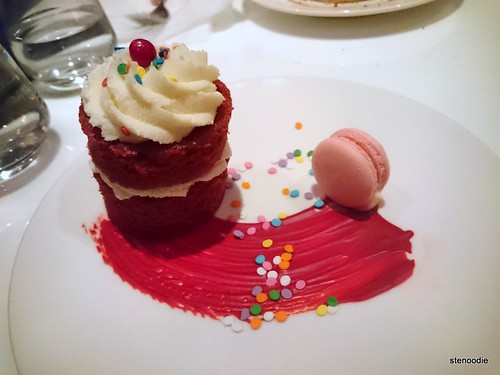 For dessert, we also split our choices. So awesome! I chose the Funfetti, and after it arrived, I understood more of what it was called that name.  It is red velvet cake that came with a little macaron on the side!!  This was absolutely gorgeous and an icon of what Winterlicious meals are all about — quaint, fancy, delicious!

I certainly took about a million pictures before I was satisfied with what I had before eating it.

The cream cheese frosting was absolutely divine.  It was so good!  I was also happy to know what the red velvet cake was moist enough and was so good!

Lastly, I was very, very impressed with the strawberry macaron.  It was perfectly chewy and crunchy on the outside.  Perfection!

The little colourful sprinkles were awesome too! So cute. 🙂 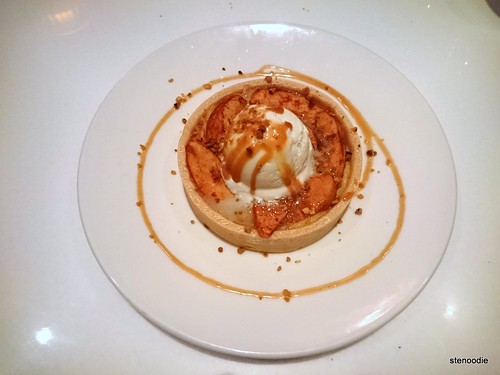 Adam & Eve
-A warm apple gallete, served with caramel sauce and a side of whipped cream

The apple gallete contained a scoop of vanilla ice cream in the centre of a masterfully created and presented apple pie.  Daphne loved the crust and I liked the dessert overall.  The small apple slices were fresh.

Phew! You would think that after that we would be done, but nope! I had more food plans on my mind: one of the reasons why I desired to go to Moroco Chocolat this time to Winterlicious was because I found out that they are possibly the only restaurant in Toronto that serves the “Melteaser”, a chocolate ball that melts with hot chocolate to reveal hidden ice cream and berries!  Ahh, what a creation!!  I knew that I would be ordering this after the Winterlicious roster of food because I couldn’t see myself visiting Moroco Chocolat so soon again in the near future and didn’t want to pass up the opportunity of trying this one-of-a-kind dessert. 😀

When our server arrived, I told her I’d be filming it as it’s not every day that you get to eat something that looks like this! (See a short video here.) 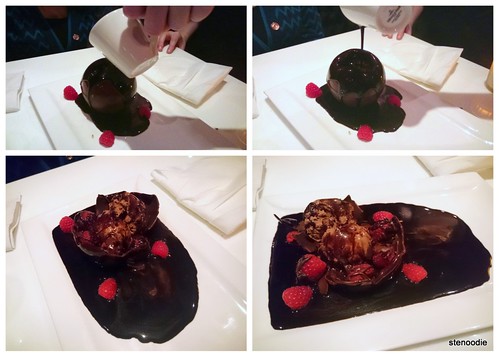 It was true to its creation and I was happy with what I saw.  The hot chocolate melted the ball of chocolate and opened up and blossomed like a flower to reveal its insides.  When it all fell apart, it was a dark pool of chocolate, berries, and broken-up chocolate ball flakes.  Wow.

This was served with a spoon so the first thing I did was starting to scoop up the dark chocolate to taste.  This was obviously high quality dark chocolate.  So yummy!!!

The flakes of the chocolate ball were also delicious and the raspberries were a good texture to combine with everything.  I can’t believe I finished most of this delicious chocolate pool all by myself! 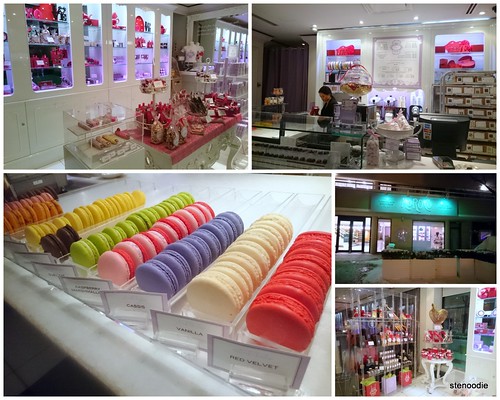 Patisserie at the entrance of the restaurant 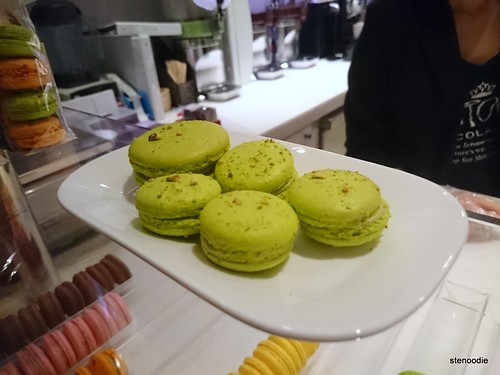 Before we left the restaurant that night for good, Daphne picked up a few macarons for her dear.  We also got to try their mini macarons in the flavour of “Sub’lime”.  So smart of Daphne to ask since it was the end of day anyway! 🙂

If you’re a dessert lover and want to dine in a classy atmosphere, I’d highly recommend Moroco Chocolat.  Everything here was so delicious and the desserts definitely stood out from the rest by a long mile! 🙂  Happy sweets! 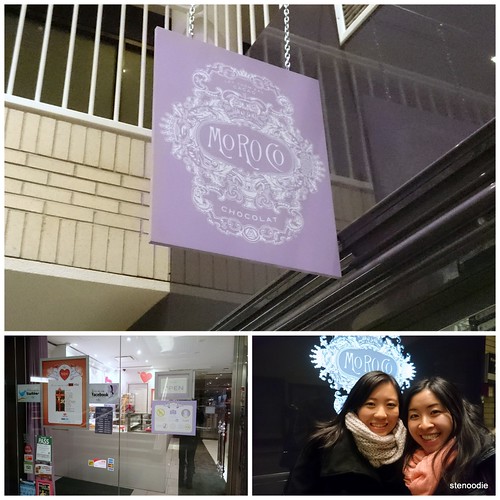