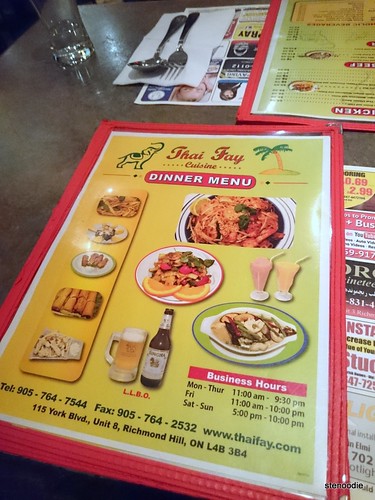 I was genuinely shocked at how delicious this restaurant turned out to be.  I was very impressed with every single dish of food that arrived at our table.  That’s actually pretty rare for any restaurant!  Kudos to you, Thai Fay Cuisine! 🙂

I met up with Alice for some catch-up time at this restaurant recently.  Although the restaurant was extremely empty on a Saturday night, this meant that the server was able to come to our table and attend to us very quickly.  I liked how she kept an eye on our food and eating progress throughout the night so that she was able to serve us our mains and desserts at the right times.  It wasn’t rushed at all. 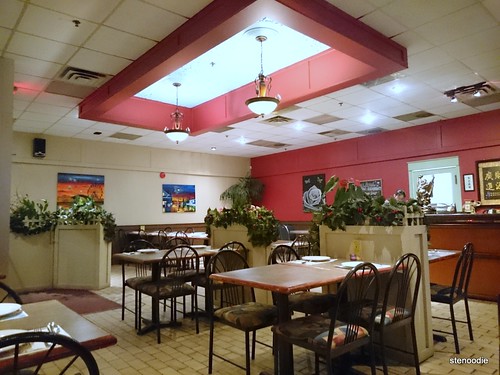 It was very empty inside. We were one of three-four tables there that night

The down side of this restaurant is that it’s a little hard to find.  It’s located close to where all the big name restaurants are on York Boulevard near Leslie and Highway 7 in Markham.  You can’t miss it.  However, because this restaurant is located to the side, their parking lot is a little small and perhaps that’s why they had so few customers on a Saturday night. 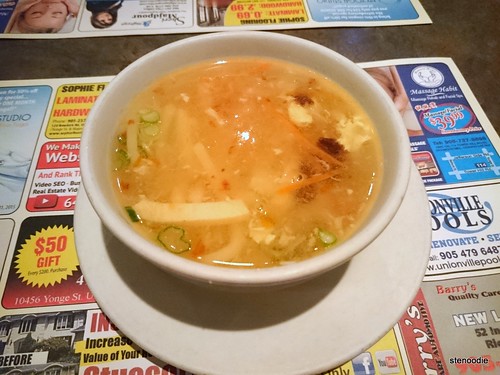 Let’s get to the food!  Alice and I shared a Dinner for Two set that included two hot and sour soups, spring rolls, a choice of two dishes, and dessert.  It was a pretty good deal for $34.99.  I chose the Pad Thai Noodle with Chicken & Shrimps and Alice chose the Cashew Nut Chicken as our two dishes. 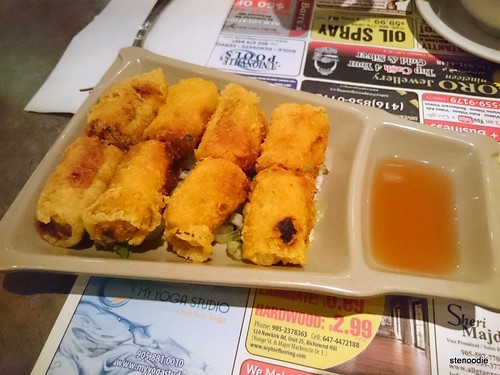 The spring rolls were fried so that the outside was very crispy.  I liked how chunky they were and really substantial considering they were just appetizers that were included in a set dinner.  Yum!  I really liked it. 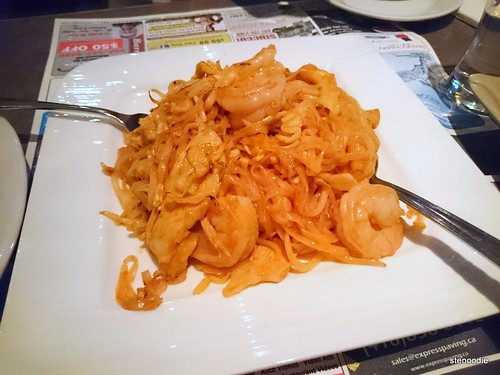 Pad Thai can be a hit or miss sometimes and at this restaurant, it was a definite hit!  The pad thai noodles were thin and stirred well with the sauce that was not overwhelming.  It contained big pieces of fresh shrimp and pieces of chicken that were smooth and not rough.  It was so perfectly made.  I was very surprised! 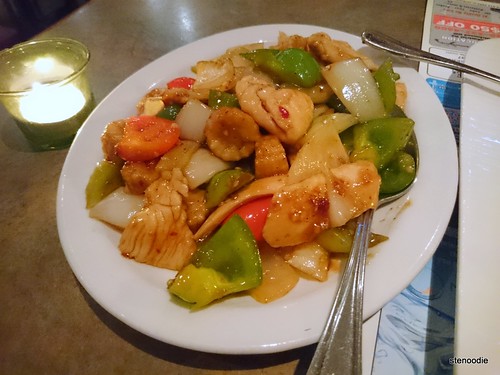 The Cashew Nut Chicken — now that I think about it — actually didn’t contain any cashews… the chicken pieces were covered in sauce though and were very smooth also.  It was mixed with lots of stir fried green peppers, onions, red peppers.  It was a great dish to mix with rice (but we didn’t order any).

The two dishes were just enough to fill us up and we still had room for dessert.  Dessert was Honey Fried Banana with Vanilla Ice Cream.  Yum!  Usually, I have had many fried bananas with ice cream at Japanese AYCE buffets.  They are usually so-so with the occasional amazing one.  At this restaurant, I couldn’t believe how amazing their fried banana and ice cream was!  The ice cream was creamy and flavourful.  The fried banana was done PERFECTLY and tasted SO good with the ice cream.  Again, this is something you have to try. 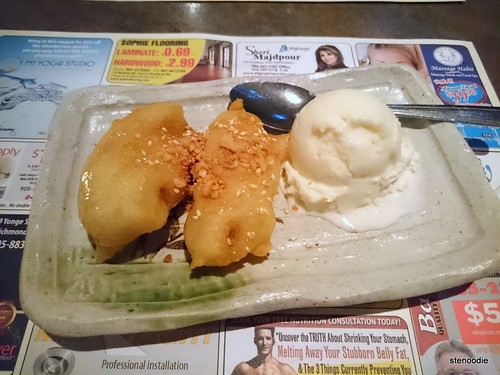 How does this restaurant serve such delicious food but have so few customers?  Maybe they need a new website or more exposure.  Just by eating the food one time at this restaurant tonight, I know I’ll be coming back and telling my friends about it!  Yay for delicious restaurants that leave a great impression on you. 🙂