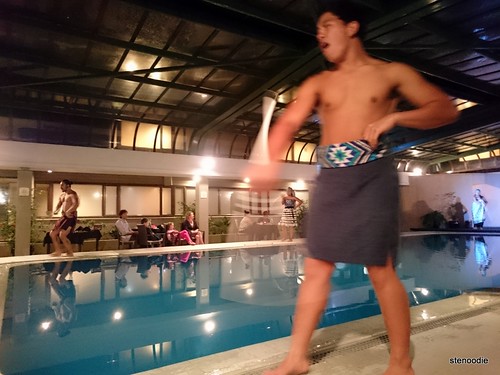 On the third night of our travels in New Zealand, we had a performance after our dinner buffet right at the hotel where we were staying at.  On the lower level, there was a pool that also doubled as a stage and performance area.  The Māori Warriors were performing a war dance/show for us that night.  I was sitting quite close to the warriors as they did their dancing and chanting.  It was actually quite mesmerizing.  I didn’t take too many photos since their movements were fast and quick.  I should have taken more videos instead!  Here’s one of the pictures; lots of motion in their dancing.

I'm a stenographer, foodie, avid traveller, and new mom who loves to share her experiences with the world.
View all posts by stenoodie →
This entry was posted in Weekly Photo Challenge and tagged Millennium Hotels and Resorts - Copthorne, motion, Māori Warriors, New Zealand, postaday, weekly photo challenge. Bookmark the permalink.