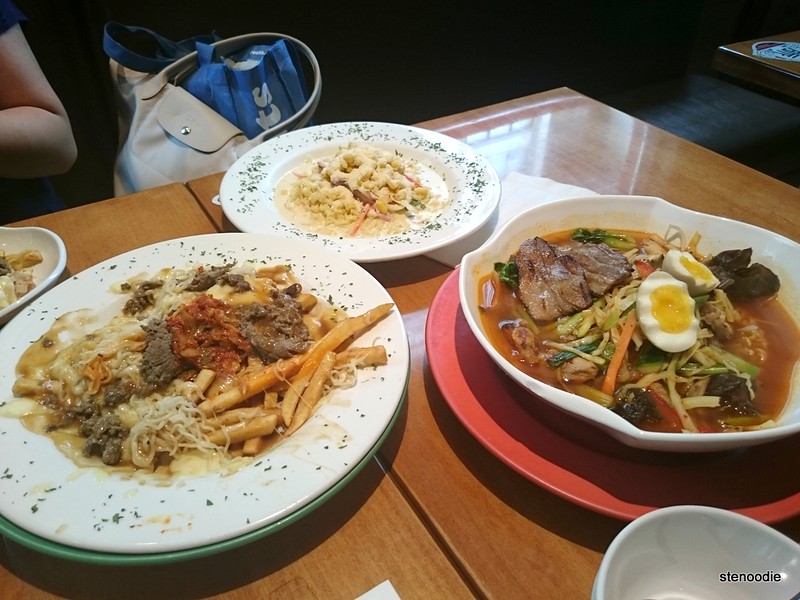 Located at 1 Baldwin Street in Toronto

Earlier this week, I was invited to Ramyun by the owner of the restaurant for a complimentary meal.  Harry said that he had just opened Ramyun and wanted me to try out their restaurant by providing a free appetizer, a ramyun dish (two if I was bringing a friend), and half a pound of their house chicken wings.  I gladly accepted the invitation.  It was convenient for me to go to the restaurant too since all I had to do was print off the e-mail that he sent me and show it to the server at the time of my arrival and the meal would be comped; I didn’t have to call ahead to book a time or be limited to a certain time slot. 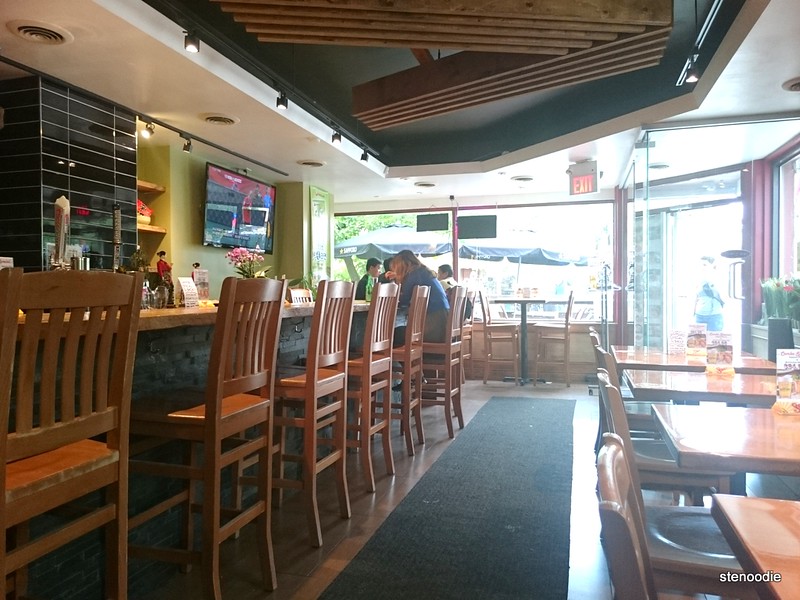 It was so empty in there! 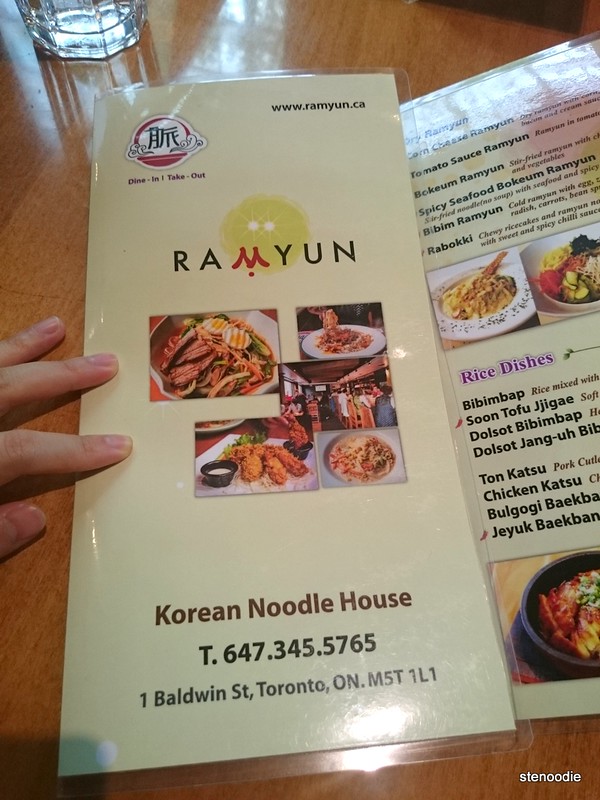 Priscilla and I arrived on a Monday evening just after 5:45 p.m. and the restaurant was rather empty.  I was expecting a little more people since Ramyun resided on Baldwin Street, a popular street where there were many great restaurants.

There were a lot of choices of appetizers and different types of wet and dry ramen on their menu.  I consulted the server on popular choices and we decided to go with the most popular “Wang Ramyun” bowl as well as the Corn Cheese Ramyun, a dry type (no soup).  For the appetizer, we decided on the Kimchi Ramyun Poutine since it definitely stood out from the other types of appetizers.  I was very excited to try their house wings!

Before the food arrived, Priscilla took a visit to the restroom.  When she came back, she told me that she saw a terrifying thing… on the way to the restroom, there were boxes and boxes of stacked instant ramen (Shin Ramyun) packages near the kitchen.  What the… I was a little appalled at this discovery but still tried to keep an open mind. 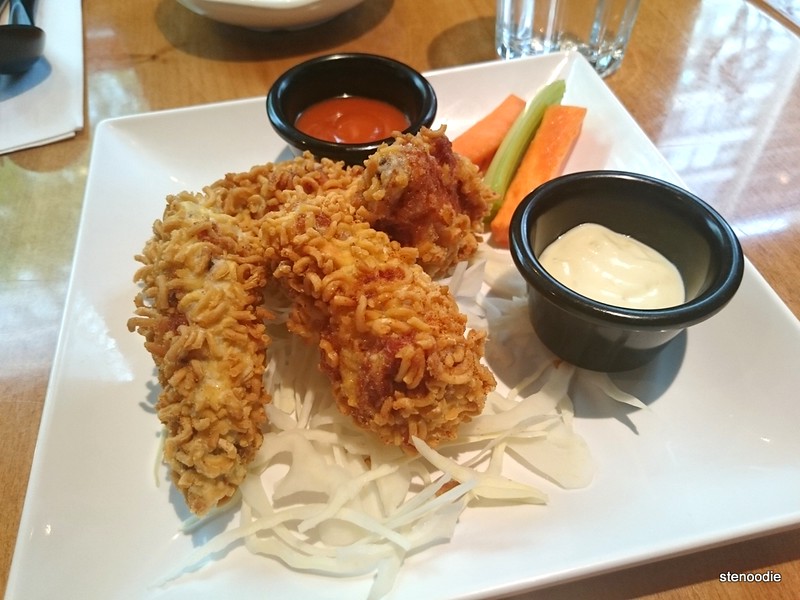 Our “half a pound” of wings arrived!  Wow.  This is a half a pound?  There were only four pieces with two wings and two drumsticks.  It was a lot less than I expected but certainly made us feel better about possibly finishing all the food we would be getting.  The chicken wings were covered with a batter of dried crushed ramen.  It was obvious from biting into it that these were definitely ramen of the instant variety type.  It was not that great and the wings actually tasted better after they had been cooled down.  They were hot from the fryer when they were brought out.

It came with two types of sauce: garlic mayo and a gochujang.  I liked the spicy gochujang sauce more since it gave the wings a little more flavour.  The garlic mayo actually didn’t have much garlic flavour and was just very creamy. 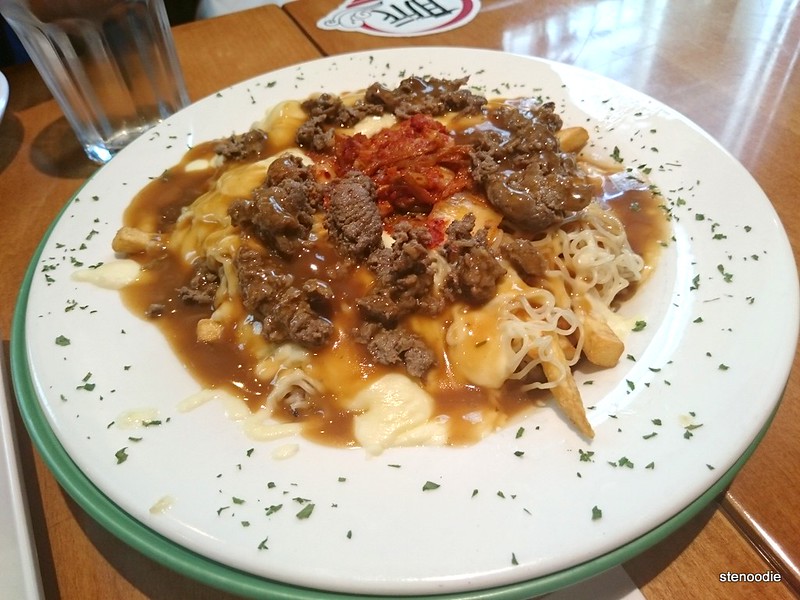 Our Kimchi Ramyun Poutine soon arrived and it was actually a gigantic portion!  There were strings of plain ramen poking out from the mound of French fries.  A layer of cheese and thin gravy covered everything.  Pieces of bulgogi beef were on the surface as well.  This dish definitely deserved a picture.  Look at how immense it is! 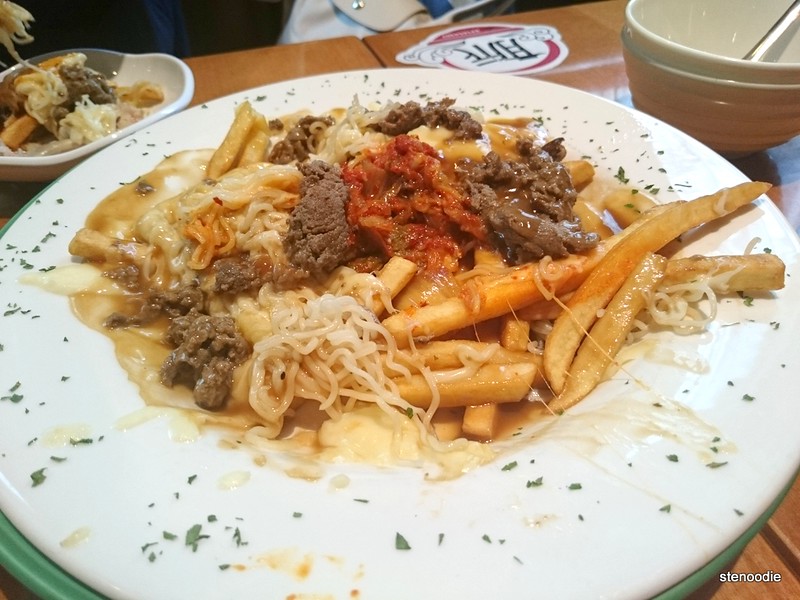 Actually, I think their fries are the frozen type and that’s why they were so soggy…

Unfortunately, I have to say that the flavour of this dish was rather disappointing.  The flavour was lacking even though there was a lot of cheese and gravy.  The gravy wasn’t strong enough in beef flavour.  The cheese, although gooey and thick, was not the high quality kind.  The French fries were soggy and definitely not crispy.  It is really difficult to enjoy a soggy poutine.  😦  The only redeeming factor about this dish was the beef bulgogi and kimchi.  Each chunk of beef was extremely flavourful and well seasoned.  They tasted like true Korean bulgogi beef!  The kimchi was delicious and perfectly preserved and made.

Very quickly after this, our two bowls of ramen arrived.  I think that it was poor planning on the server’s and kitchen’s part to serve these two bowls of ramen so quickly.  I understand that it’s not a western restaurant where they usually wait for you to finish the appetizers first before the mains arrive, but in this case, because ramen should be eaten hot and fresh from the stove, it became a low point because there was still so much food on the table; we couldn’t get to the ramen fast enough for it to be devoured at the optimal time. 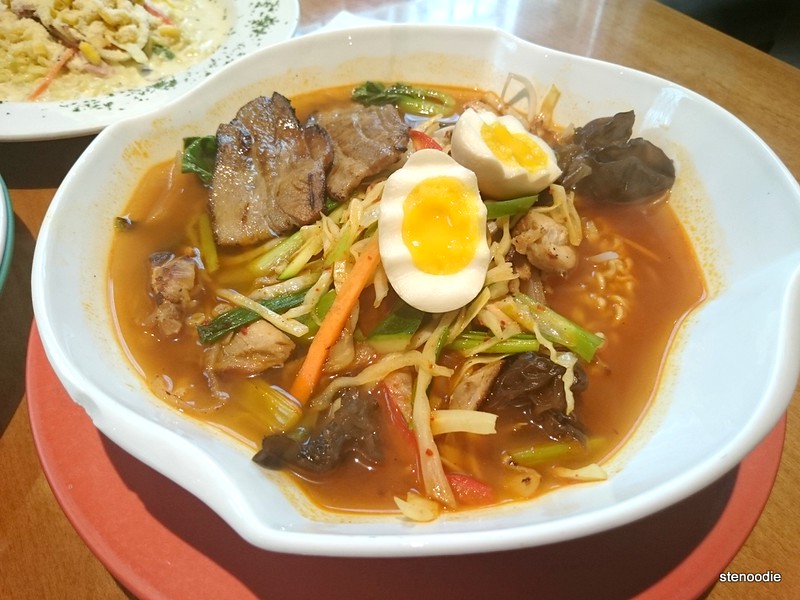 The bowl of Wang Ramyun, as the server had mentioned, was indeed huge.  It was made for probably 2-3 people to share.  Immediately, I could see that the ramen noodles were of the instant noodle variety.  They definitely did not make their own ramen noodles here.  Even their broth is from the instant noodle packets.  I’ve never eaten at a ramen restaurant where their noodles came from instant noodle packages.  It’s actually such a disgrace to be called a noodle house when your prime ingredient is essentially instant processed food.

This ramen bowl contained not only lots of instant noodles, but lots of vegetables as well.  It was impressive how much vegetables there were in here, but as far as the entire bowl, it was just like eating a bowl of ramen at home.  The soup was thin and a little spicy, nothing like the creamy ones at real ramen places like Santouka or Santosei.  The pork belly was actually decent but a little rough.  The egg was just average. 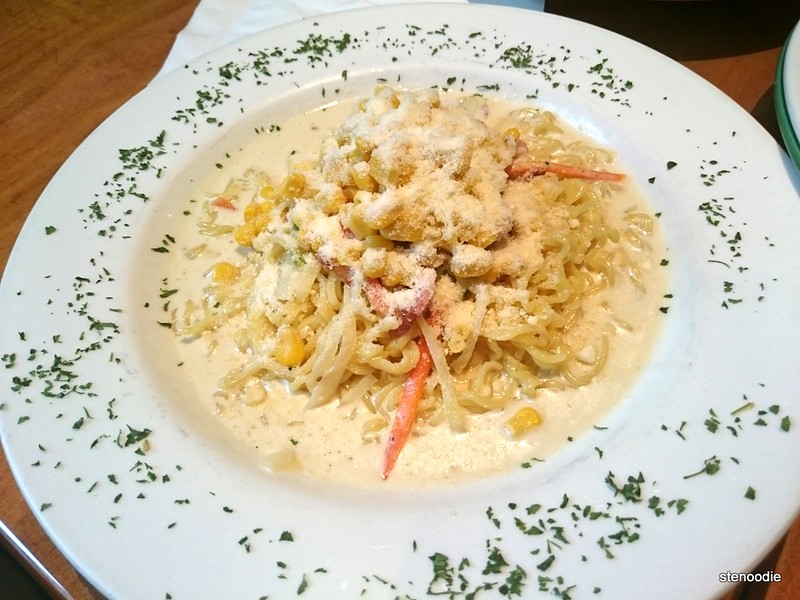 The other ramen dish we ordered was a “dry” type.  It was Corn Cheese Ramyun.  It was a plate of ramen that was covered with lots and lots of cheese!  There was shredded cheese sprinkled on top of the dish too.  This dish also contained ramen of the instant noodle type.  However, this dish tasted a little better because of the cheese and how it’s more unique to eat dry ramen like this.  However, the cheese was similar to the one used in the poutine and also was very bland.

Because all three of the latter dishes were huge and contained more than three persons’ worth, we didn’t end up finishing the Wang Ramyun, Corn Cheese Ramen, or the poutine.  It also didn’t feel good to sit there and eat four dishes of instant ramen-inspired dishes.  Priscilla and I were able to split our remainders into containers to bring it home for lunch and dinner the next day.  This was nice that the portions were so big that we both got to take food home. 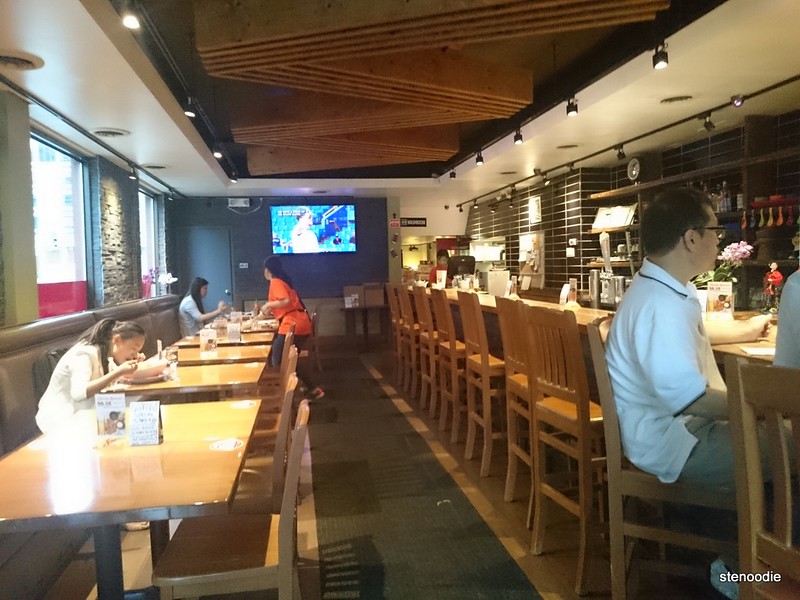 The restaurant was still barely full when we left

Before I left, I made sure to go to the restroom.  Lo and behold, I definitely saw the mountain of stacked boxes of instant noodles of the Shin Ramen packages staring me right in my face.  If I were the owner, I would hide these boxes out of sight from the customers!  Even though the customer would taste the instant noodles and realize the ramen served is not actual ramen, but to put these boxes out there like that in the open is such a disgrace to the ramen restaurants around town.

I thank you very much, Mr. Harry, for inviting me to your restaurant for a free meal, but I have to say no thank you to the “ramen” that you serve in your restaurant.  If you want to improve your restaurant and customer base, please change your ramen into actual ramen noodles and not the instant variety type that anyone can buy from the supermarkets!  It is such a rip-off! 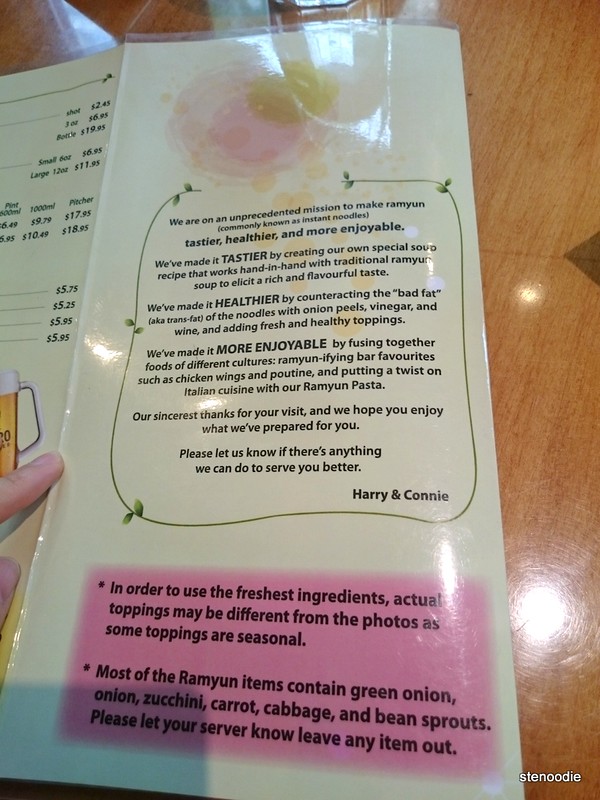 Here’s a little blurb about their restaurant. They never claim that they have the best ramen noodles, only that their goal is to make it “tastier”, “healthier”, and “more enjoyable”. Sorry, your noodles were definitely not tasty, healthy, or enjoyable!

Also, the service wasn’t great.  The girl that served us seemed clueless as to how to serve us.  You would think that since she knew I was there to blog about the food and restaurant that she would show a little more initiative in telling us about the dishes, the restaurant, and giving a good impression of the place.  She seemed very inexperienced and her uncertainty about everything worsened my impression of the restaurant even more. 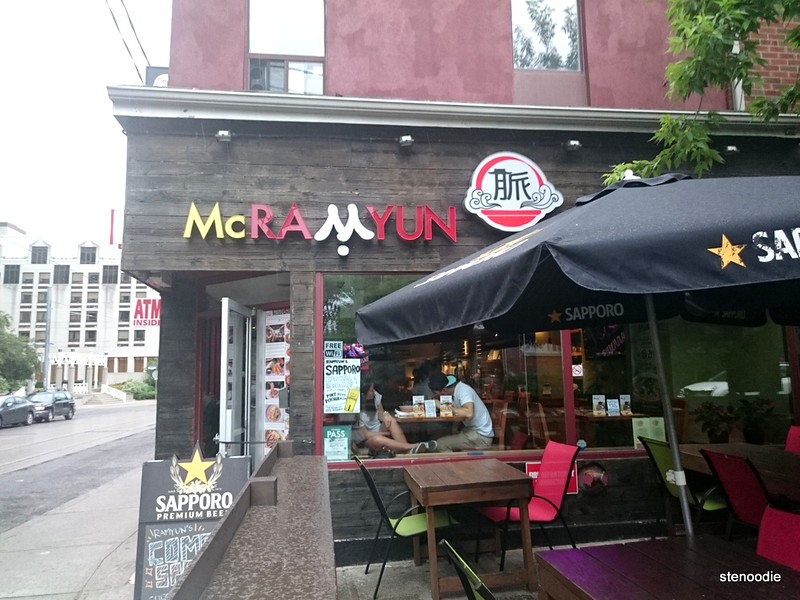 FTC Disclaimer:  Although Ramyun reached out and invited me to a complimentary meal to review their restaurant, the opinions expressed here represent my own and not those of the restaurant.