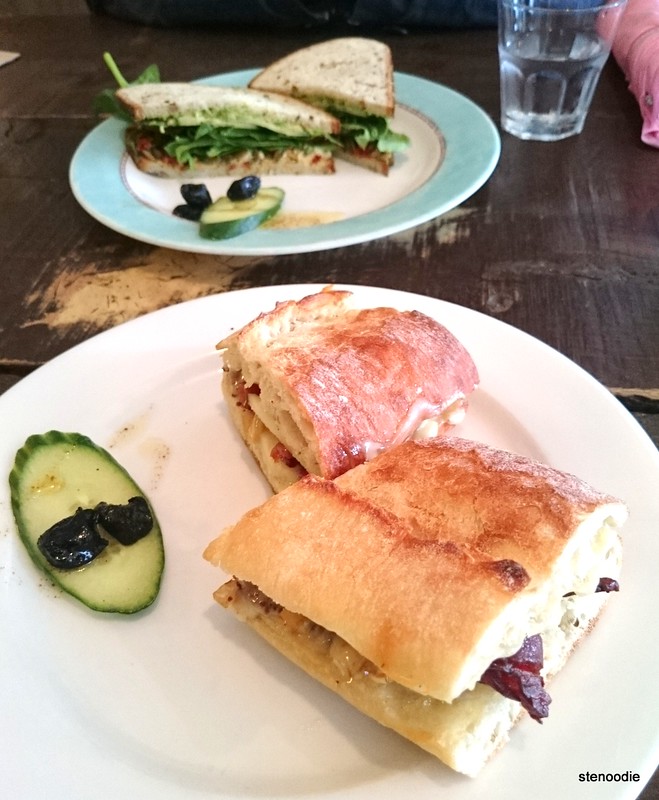 I received an e-mail from Saving Gigi last week to invite me to their restaurant to enjoy some of their featured items and to help them promote their restaurant.  Sure!  I was happy to do so.  I always write honest reviews, so even if a restaurant has invited me to eat, I really do give my truthful opinion about what I think.

After I responded to Saving Gigi about coming to the restaurant, I asked if there would be any ideal time or day for me to come in.  There was no e-mail response.  Because I needed to set my schedule for the week, I assumed the restaurant invite would be a go and asked a friend to join me for this lunch (they were okay with me bringing a friend), and e-mailed Saving Gigi to let them know out of courtesy that I would be there on Tuesday at noon.  Again, there was no reply.  I really didn’t know at this point if I was expected or not.  I e-mailed them a final time to inform them of my arrival on the night before Tuesday and, again, there was no reply.  This was odd because most restaurants that invite me out to eat respond to me promptly.  I decided to go ahead and show up with my friend at the time and date I suggested anyway — the worst that could happen was if they decline me on the spot, we could always go to another restaurant in the area for lunch.

Thus, Grace and I entered the restaurant at noon on the Tuesday and I hesitantly approached the counter to announce my name and my blog and that I was here to do a tasting.  Someone at the counter acknowledged me and redirected me to Glendon, who was sitting with his laptop near the wall.  Phew!  He sat us down and asked me about my blog and when the review post would be posted because he wanted it posted at the optimal peak time on social media in order to get the most viewers and results.  Sure, I shared my blog stats a little bit, but I found the conversation quite uncomfortable.  I have never, ever, been requested by a restaurant to post my blog post of a restaurant review at a specific time.  I found it very offensive and unpleasant because I felt like my blog reputation was being questioned.  I have done a lot of restaurant reviews and as a social media advocate, I have learned to always post my blog posts at optimal viewing times. 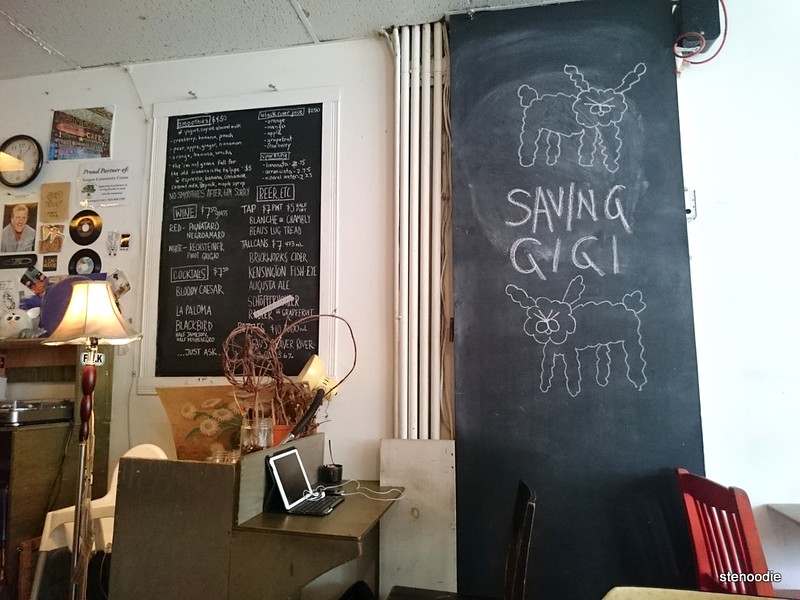 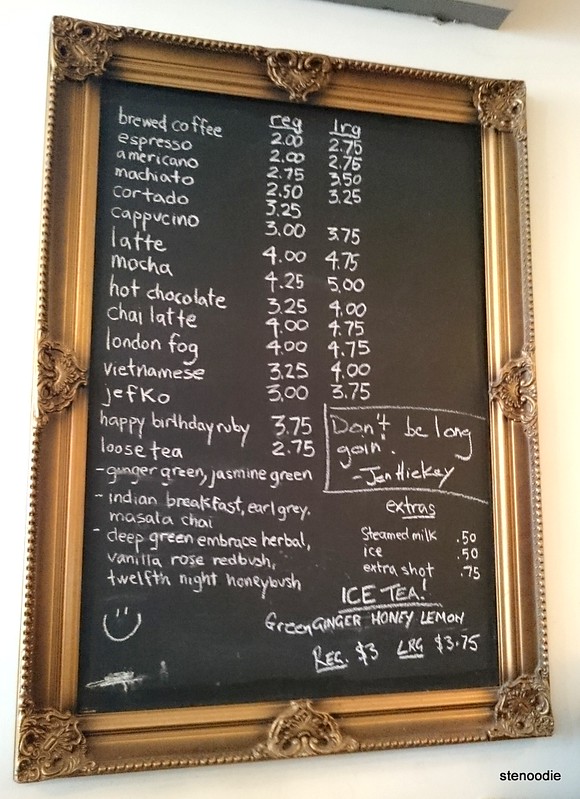 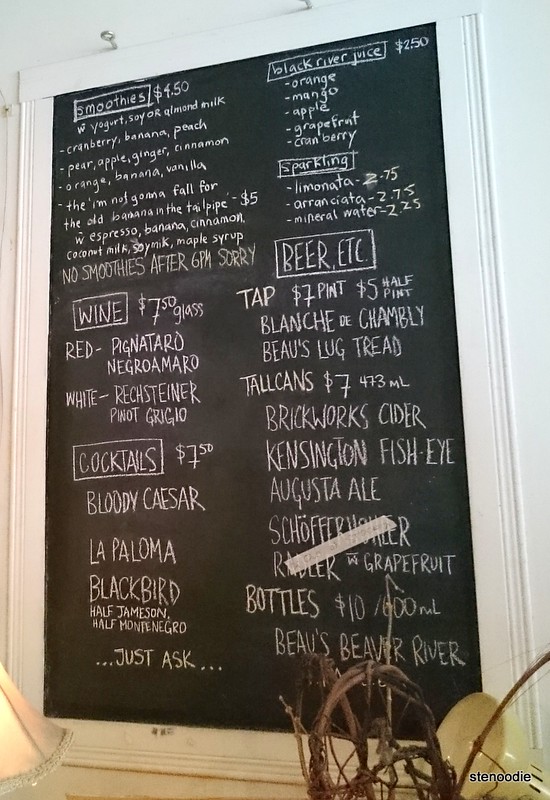 Anyway, Glendon informed me that there were a couple of items that the owner of Saving Gigi specifically wanted to promote.  He asked AJ, one of the co-owners of the restaurant, which two sandwiches they wanted to promote.  He said it would be the Hummus sandwich and the Melted White Cheddar sandwich.  Okay then.  I guess that was what Grace and I would be having for lunch that day….  (Nothing was asked about if we had allergies to any food item or not.  What if I couldn’t eat an ingredient that their featured sandwiches contained?  A little more consideration would have been appreciated.)  This was also the first time that attending a restaurant review felt like a job. 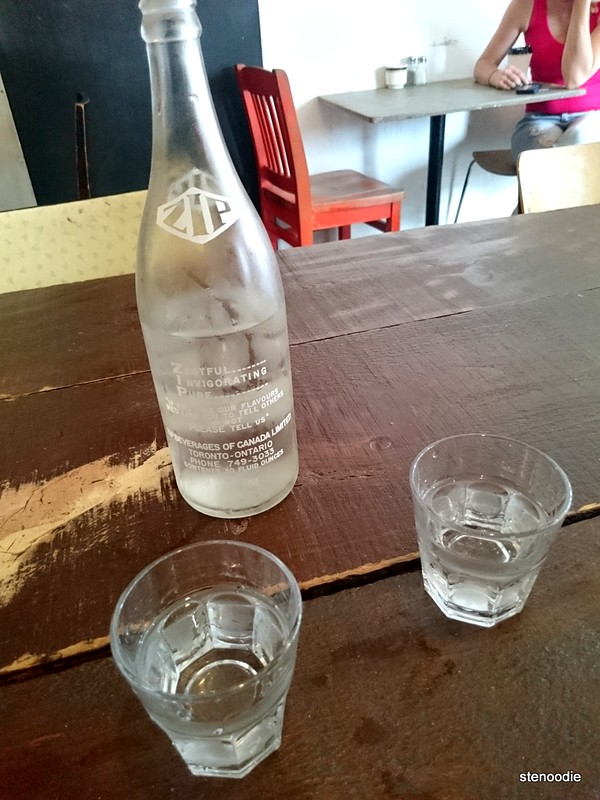 We were given a pitcher of water and water glasses for self serve while our sandwiches were prepared for us.  All around us, there were lots of people enjoying a drink or eating while working on their computers or reading.  It was a very quiet atmosphere.  There was music playing, but the songs didn’t come on consistently.  Sometimes there would be a song playing, and when it ended, there would be dead silence in the restaurant.  Then after that, a song would start up again after the moments of silence.  It was quite inconsistent.  There was no one talking in the restaurant except for Grace and I.  To be honest, it really made the experience very uncomfortable because I felt like the whole restaurant was listening to our conversations.  Saving Gigi is a great place for a singleton to relax and dine in and do some work.  It is almost like a library with how quiet the restaurant was.  (I guess if you wanted to hang out and chat, you could do so on the patio.) 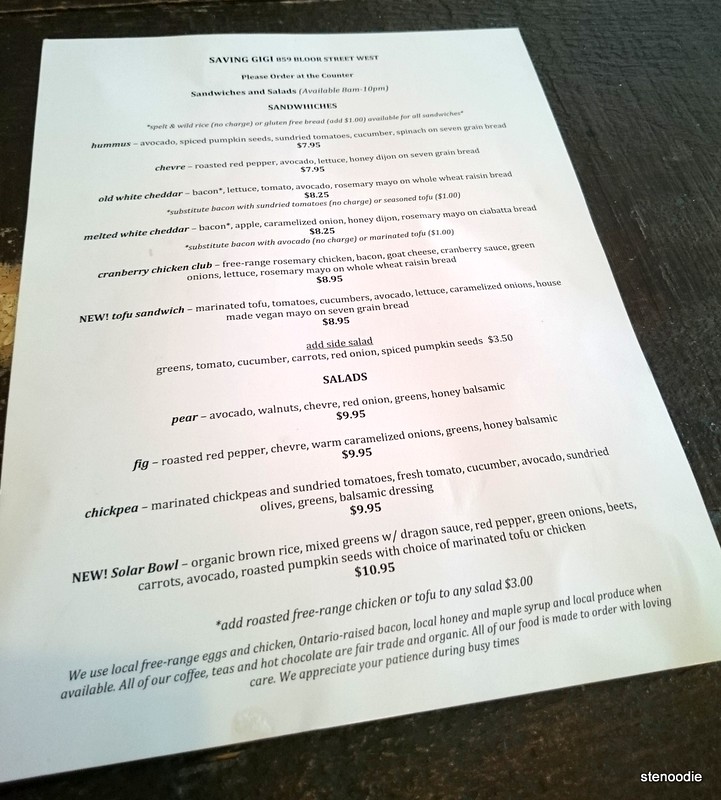 One side of the food menu

I liked the decor of the place.  It was very homey and reminded me of stepping into someone’s old-style living room where there was a desk to the side of the restaurant with books.  Even all the chairs in the restaurant were mismatched to give a feel of a lived-in home.  They also have a good-sized patio, something that most casual cafes don’t have. 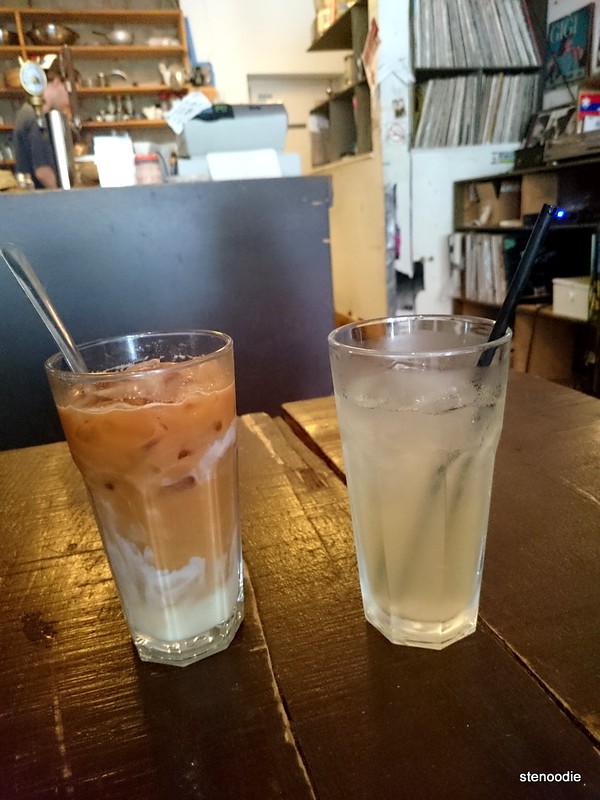 Glendon also asked us what kind of drinks we wanted.  There was an extensive drink menu on the wall.  I chose a Vietnamese iced coffee while Grace chose a Green Ginger Honey Lemon Iced Tea.

I really enjoyed the Iced Vietnamese Coffee.  It was just the right consistency and flavour and rich.  Yum! 🙂

I also tried Grace’s Green Ginger Honey Lemon Iced Tea.  It was very refreshing and great for a hot day.

Before long, our food arrived.  I made extra sure to snap more pictures than I usually do at restaurant tastings of the food and restaurant because from our conversation, it seemed to me that Glendon expected a more thorough review than most restaurants expect.  A lot of angles here and there of the food were taken. 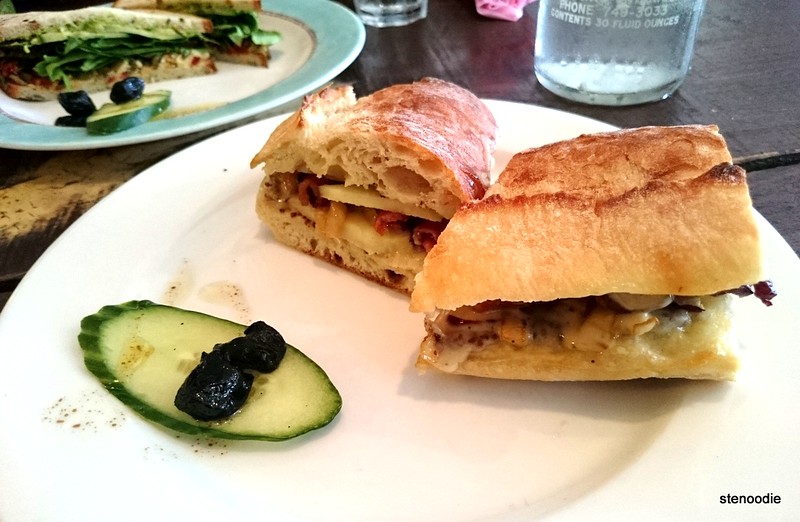 The White Melted Cheddar contained bacon, apple, caramelized onions, honey dijon, and rosemary mayo on ciabatta bread.  I asked for this to be toasted.

I liked that the sandwiches were cut in half so it was easy to share and eat.  I actually really liked this sandwich!  It contained bacon as the only meat and the rest of the sandwich was very light and fresh.  I really liked the honey dijon and the rosemary mayo.  It incorporated a sweetness to the sauce that I’ve never tasted in a sandwich before.  The slight crisp and salty bacon gave the sandwich some texture and taste.  It was a really good sandwich!  I found that the ciabatta bread was a little hard (probably because of it being toasted), but other than that, I would highly recommend trying this sandwich! 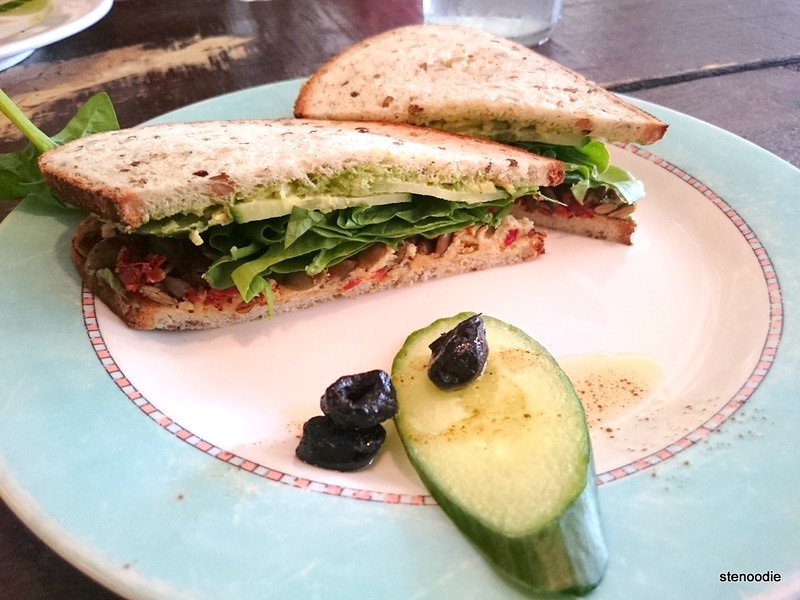 The second sandwich was the Hummus sandwich.  It contained avocado, spiced pumpkin seeds, sundried tomatoes, cucumber, and spinach all sandwiched between two slices of seven grain bread.  It was a very healthy sandwich since there was no meat in it.  I’m not a huge fan of pumpkin seeds so this sandwich in particular wasn’t that appealing to me.  Grace found the spiced pumpkin seeds very spicy and picked them out.

All in all, I’m very happy that we got to try Saving Gigi on the house and to help them promote their two sandwiches.  I would have loved to try something else of my own choosing on the menu instead of eating something that was pre-chosen for me.  (A few previous restaurants that have invited me out for complimentary meals have also had preset menus for me, but it is always a bigger selection than just two specific items — like Shamrock Burgers or Southern Accent.)  Saving Gigi’s new tofu sandwich actually sounds very different and worth trying.  It also would have been nice to end with a dessert or even to try their breakfast/brunch items.  Alas, I can’t ask for much since I was only asked there to review the two featured sandwiches that they wanted to promote. 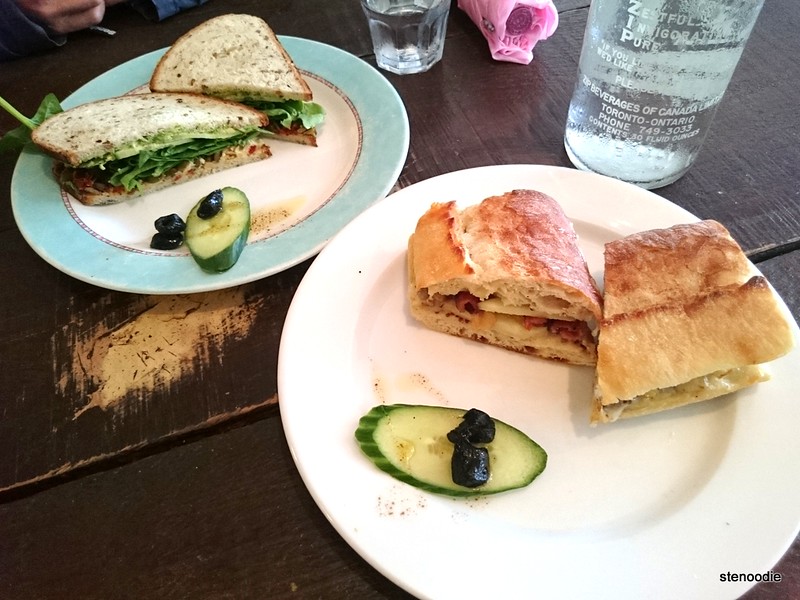 When we finished our sandwiches, Glendon came over to chat with us.  This time, the mood was completely different and I felt so much more comfortable and at ease in the conversation.  Perhaps Glendon was in the middle of working on something when we came in and wanted to get straight to the point on how my visit would help their restaurant and that’s why the initial greeting was so unpleasant and blunt.  (Whether intentional or not, first impressions matter a lot and I unapologetically recall the first impression of this restaurant as an unpleasant one.)  Glendon is a PR student completing his internship right now at Saving Gigi and helping them do their promotions and advertising.  I hope this blog post helps their business. 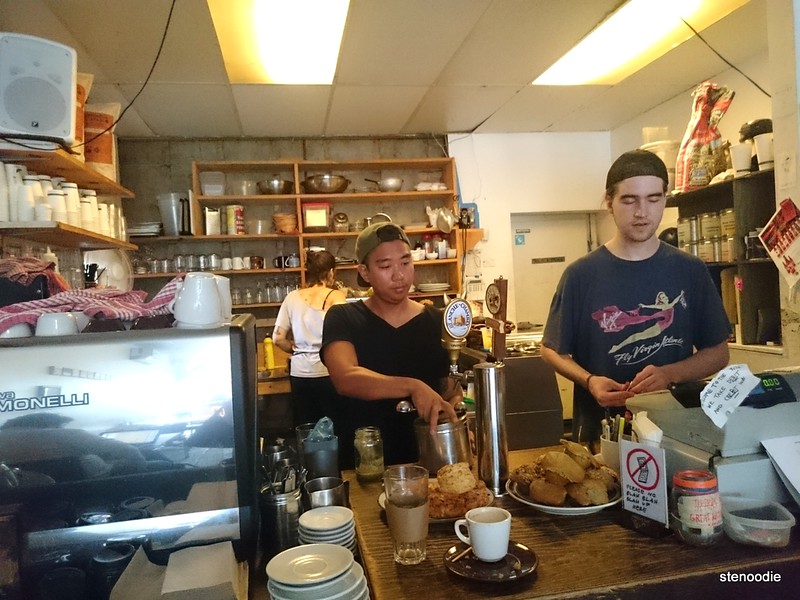 They have a lot of staff here working the counter 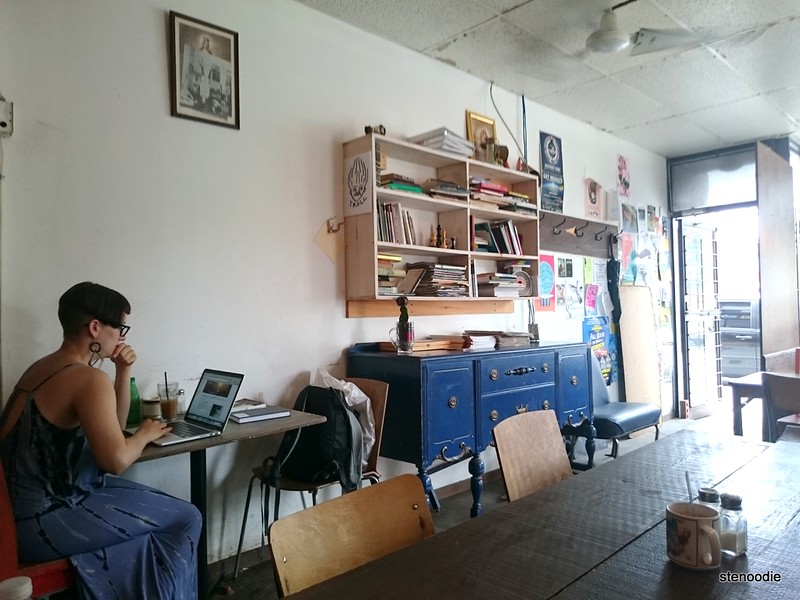 It’s a nice quiet environment for someone to work productively 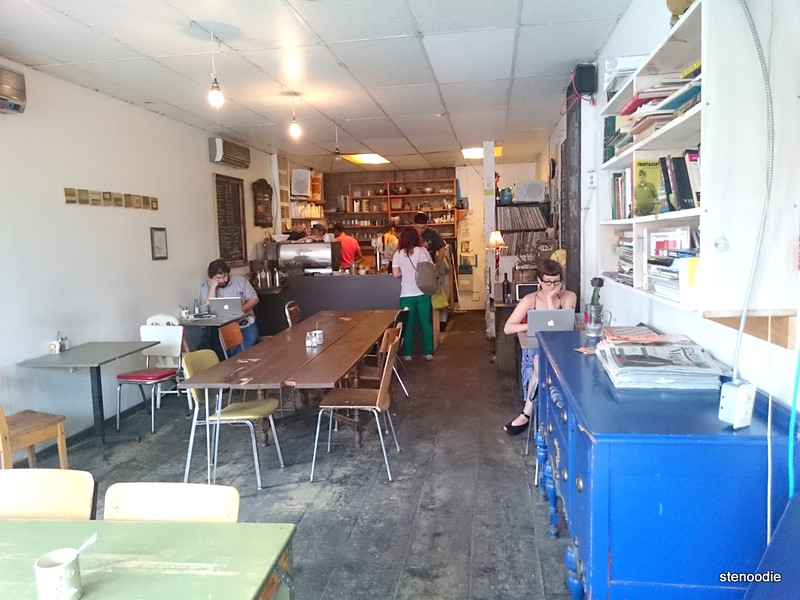 It’s low-key and casual. There was a “hipster” feeling in there 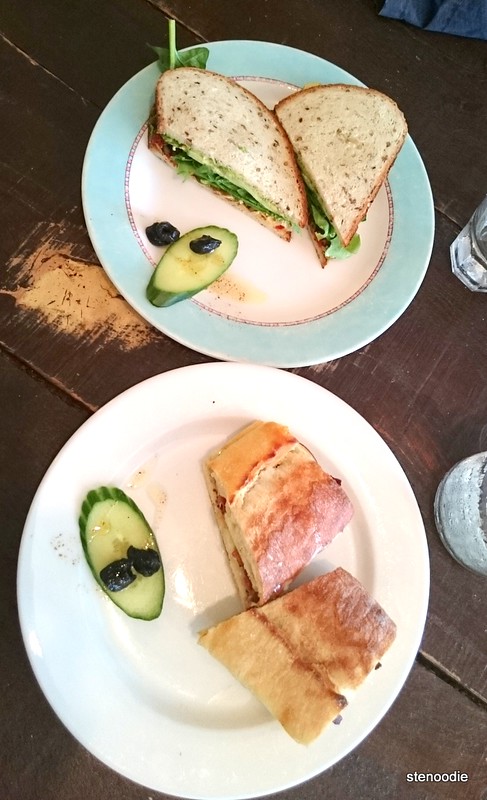 A shot of the two featured sandwiches from the top

Thanks, Saving Gigi!  If you are in the area and want a quiet place to work over a bite or drink, Saving Gigi is a good choice to consider!

FTC Disclaimer: Although Saving Gigi reached out and invited me to a complimentary tasting to review their restaurant, the opinions expressed here represent my own and not those of the restaurant.