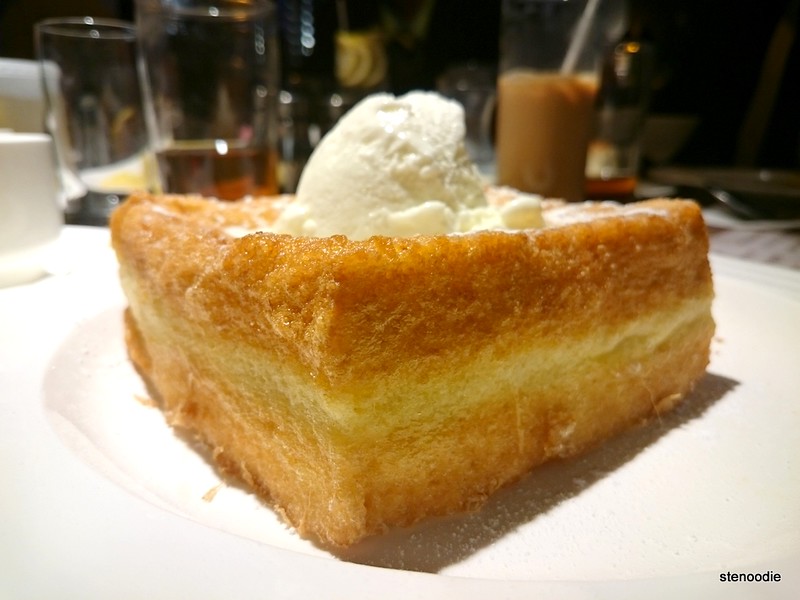 Everyone knows about Cafe Hollywood, right? 😀  The first and original location of City Cafe Hollywood is located right on the outskirts of Market Village and has been there for over a decade.  I remember first going there for afternoon tea with my mom many years ago when I was a kid and now it’s made popular by us GenYTO kids who go there every Thursday evening and anytime during the week too for cheap eats and delicious food.  Cafe Hollywood is a modern style Hong Kong style cafe that features a lot of old-style Hollywood memorabilia and decor.  It’s a really nice place! 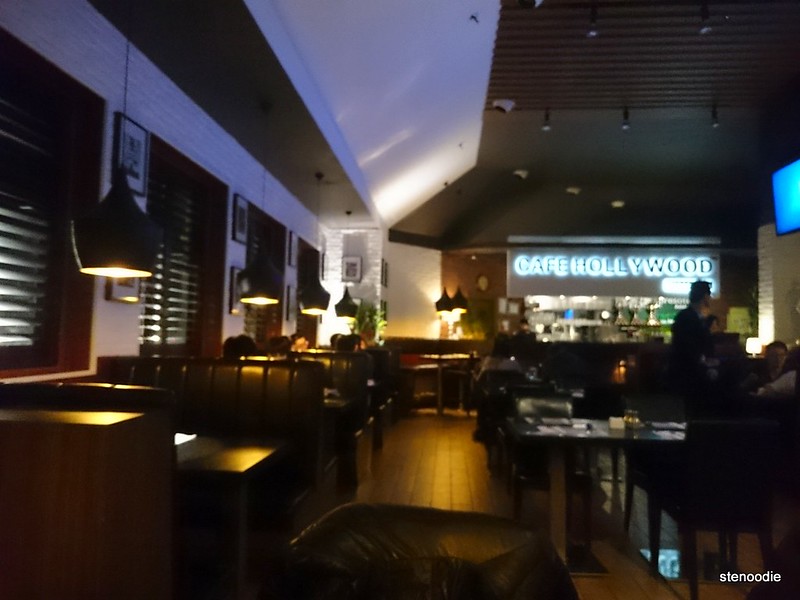 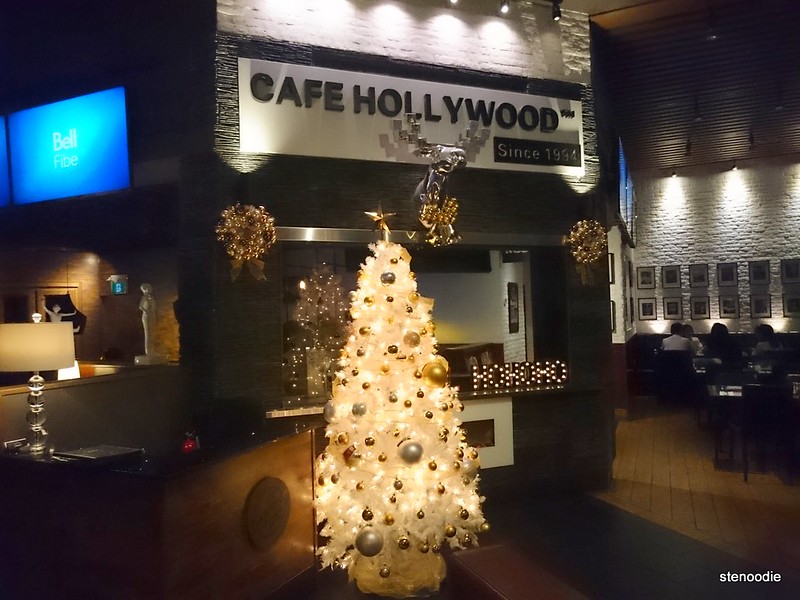 In my first review of this place, I talked a little bit about their typical cafe food.  In this review of their new-ish location on Kennedy Road near Denison, I’ll talk about what we had there recently!

We like to believe that because we go there so frequently and give them so much business (we literally pack the entire place on Thursday evenings), that that’s what offered them the ability to open this new location.  This location location at Kennedy Road takes up the old facilities of the Burger King fast food restaurant that used to be here.  They completely renovated the entire space to make it look super classy and nice.  The environment in here is even nicer than the one at City Hollywood Cafe!  However, it doesn’t have as much old-school Hollywood memorabilia as the other location. 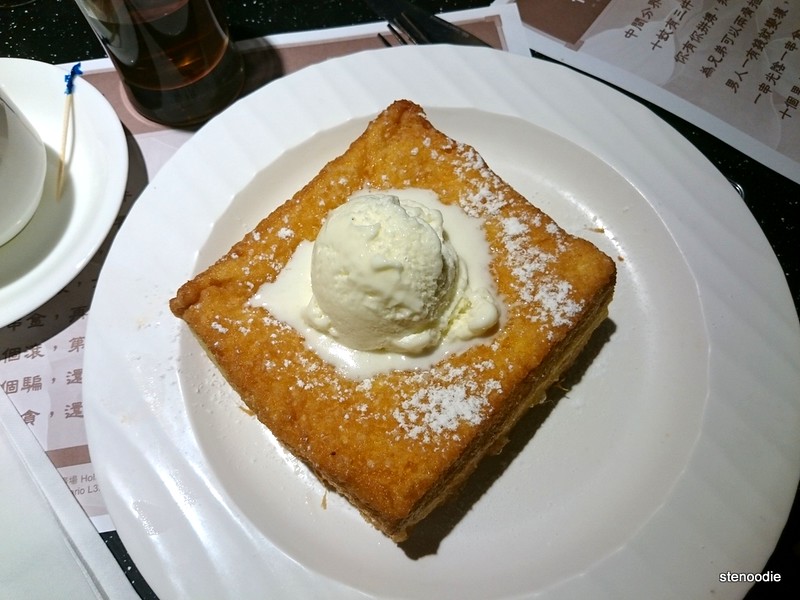 We came here recently on a Thursday (as usual) after 10 p.m. and I ordered the French Toast from their midnight menu.  It’s an amazing French toast that is topped with a big scoop of vanilla ice cream.  Yum!  They prepare it so deliciously here!  Clarissa ordered a dish of Portuguese Chicken Rice.  I tried a bit of it and it was so good!  The chicken was so tender and the Portuguese sauce was yummy. 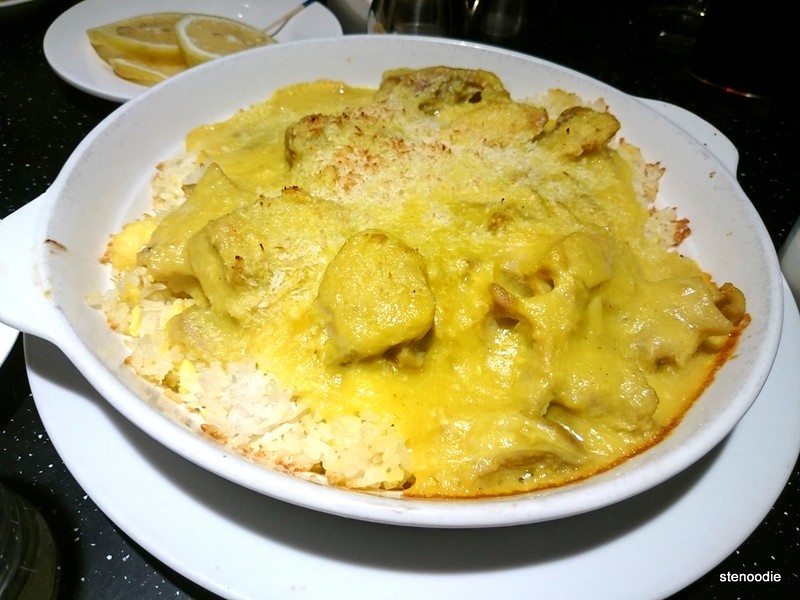 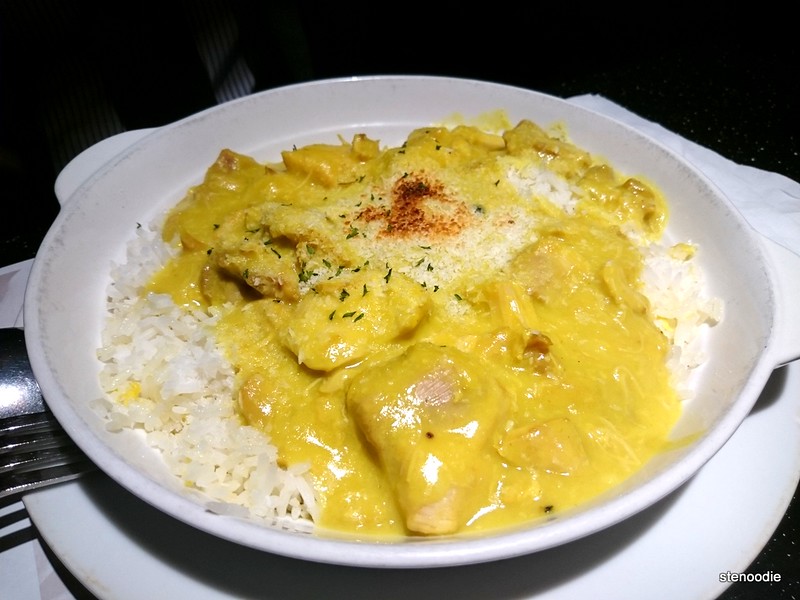 Same dish except ordered on a different night — notice the coconut sprinkled on top of the rice! We didn’t notice this at the other location 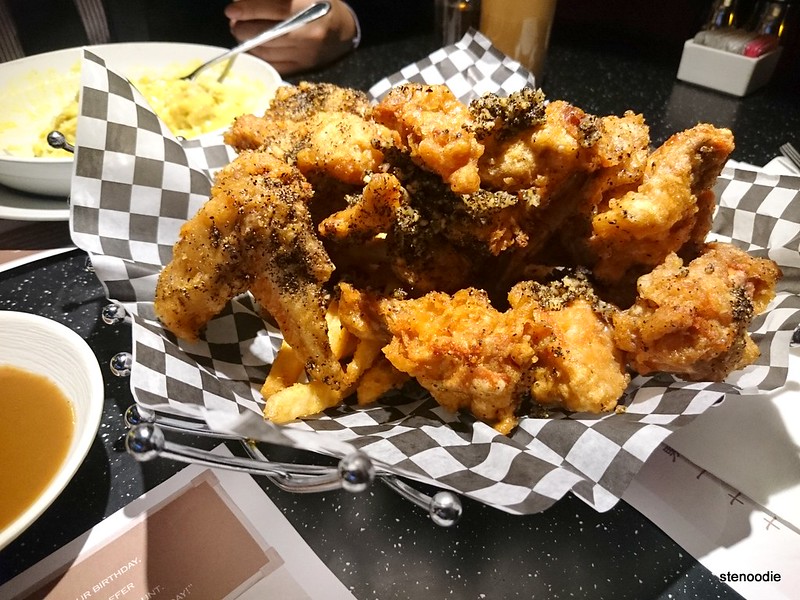 On another recent visit, I was telling Jessica all about their amazing deep fried chicken wings with fries and gravy that we ended up ordering it when we arrived.  It was another late night feast but I loved the wings.  It was just as crispy and well fried as the original location.  How do they do it!?  Chinese places like this just know how to deep fry chicken wings to perfection so that it’s not too over-fried and the inside meat is left tender and moist.  The exterior was perfectly crispy and light!  It was so good!  I always choose the Pepper Chili flavour. 🙂  The fries were also remarkably crispy with the most delicious gravy.  Loved it!

It’s so nice to see that this new location maintains the same standard and quality as their original location.  This location does close at midnight though, which is earlier than the other location.  It’s not as popular yet, but it’s also a good alternative to choose if the original location is packed. 🙂

Have you been here yet?!  The perfect wings place!  Also, perfect for casual afternoon teas, lunches, and dinners! 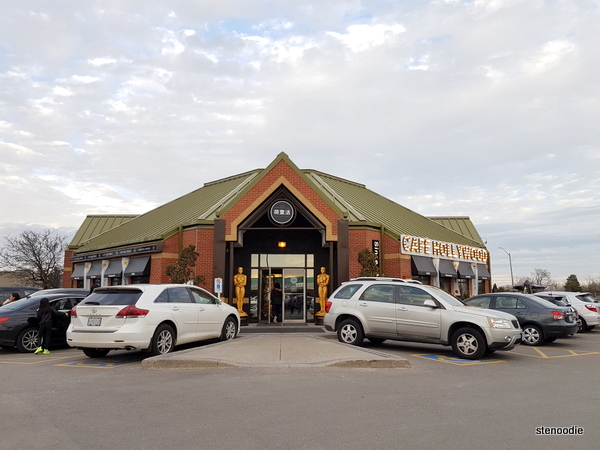 This used to be a Burger King

November 24, 2017:  Recently, my mom and I came to Cafe Hollywood again during their afternoon tea time.  I hadn’t been to Cafe Hollywood since the last time I blogged about it and was seriously craving their fried chicken wings again.  It was also my mom’s first time there.  The Market Village location of the original Cafe Hollywood has officially closed its doors due to the impending closure of the shopping mall.  As such, everyone has flocked to this new one — which is really not so new anymore.

On this visit, I was starving and craving for their 20-wings combo.  This was what I ordered right away upon sitting down.  There were so many people in the restaurant on a weekday afternoon!  They must have been there for the afternoon tea time combos.  The place was packed and full of life. 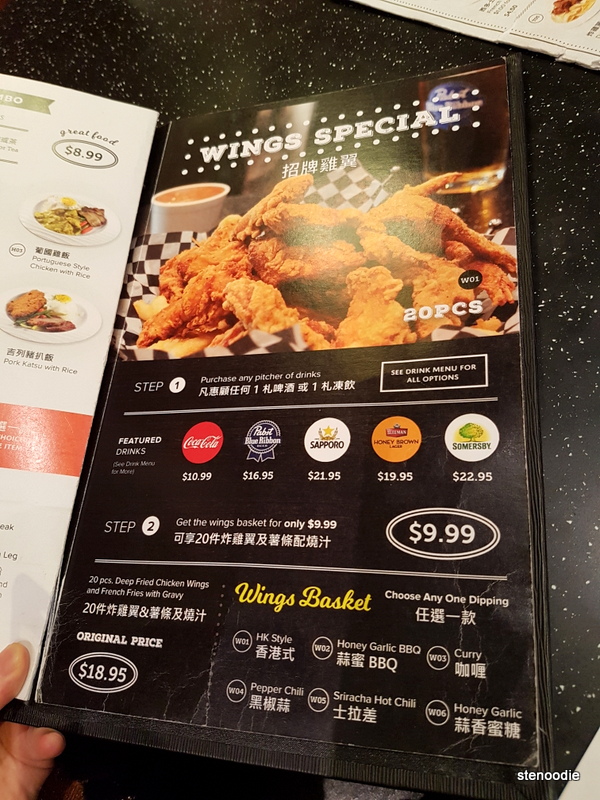 My mom ordered the curry ox tongue with rice.  This was part of their regular menu and not part of the afternoon tea time one. 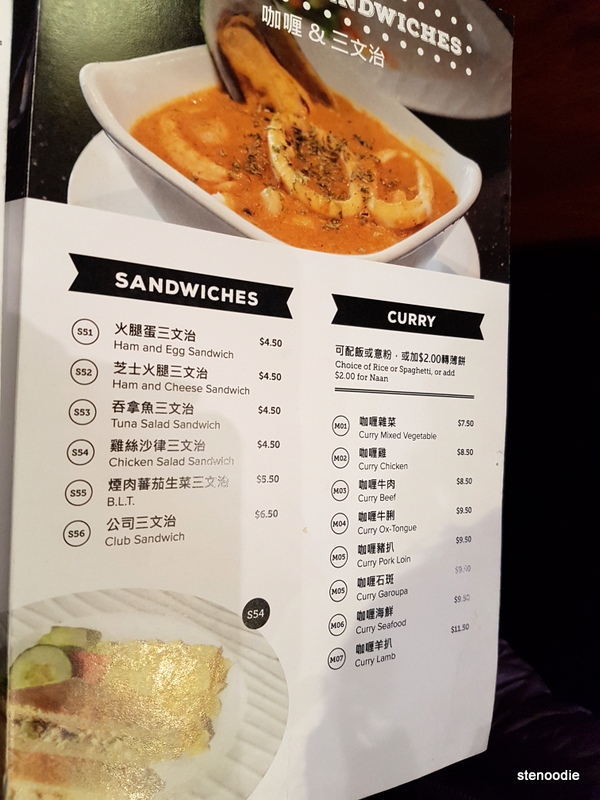 My Pepper Chili Chicken Wings arrived!  It looked the same as previous visits with 20 wings (mostly of drumsticks instead of wing parts) with crispy fries underneath the pile and a dish of gravy.  It was just as delicious as I remembered it from before.  Mmm, fried chicken wing craving seriously satisfied!  It was so good. 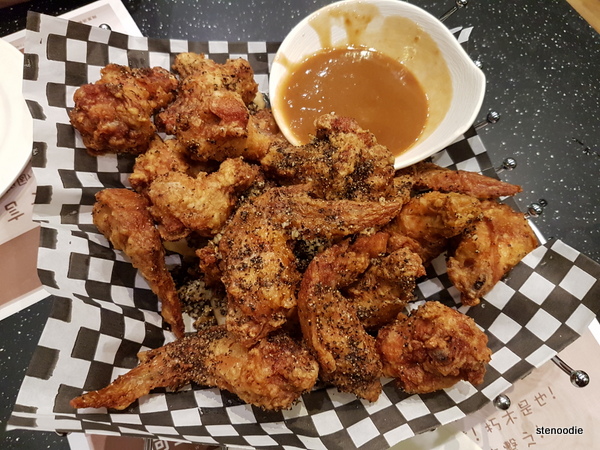 The Curry Ox-Tongue Rice that my mom ordered arrived with the curry separate from the rice and veggies.  The curry had a very strong green curry spicy flavour.  There was way more curry than rice so the ratio was a bit off.  To that end, we finished the rice at the restaurant but took the remainder of the curry sauce home.  We also took the remainder of the chicken wings home too; it was a lot for two people! 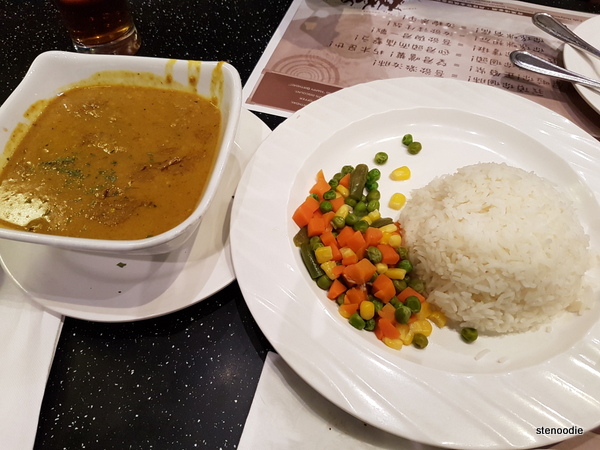 When my next fried chicken craving comes, I might come to Cafe Hollywood once more. :’) 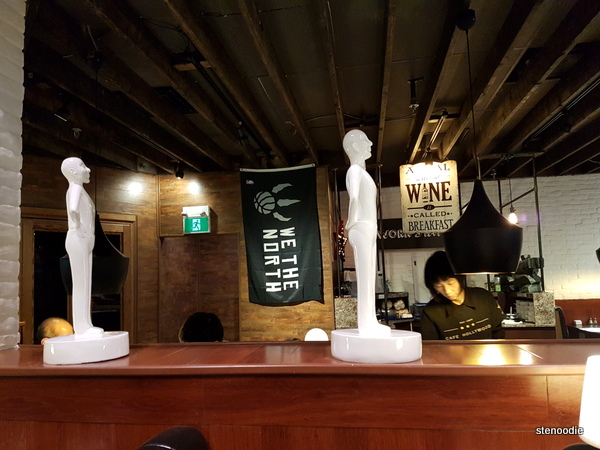 2 Responses to Cafe Hollywood (Newer Location) at Kennedy and Denison