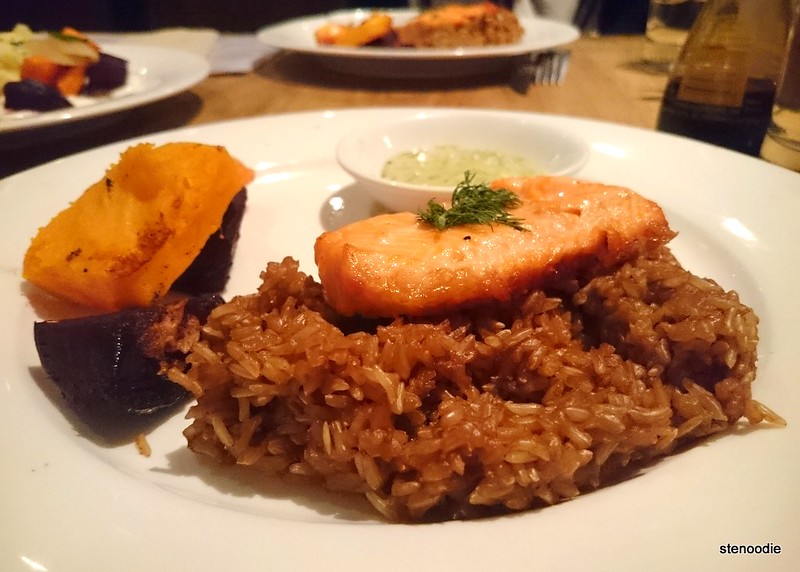 After a first full day in Edmonton, we headed towards North America’s largest indoor shopping mall to do a look around and to eat dinner at Earls Kitchen + Bar. I found it really cool that West Edmonton Mall has an entire “street” dedicated to restaurants called Bourbon Street.  One of these restaurants was Earls!

Earls Kitchen + Bar is a pretty well known franchise in the states and in Canada.  I was really excited to try out the food! 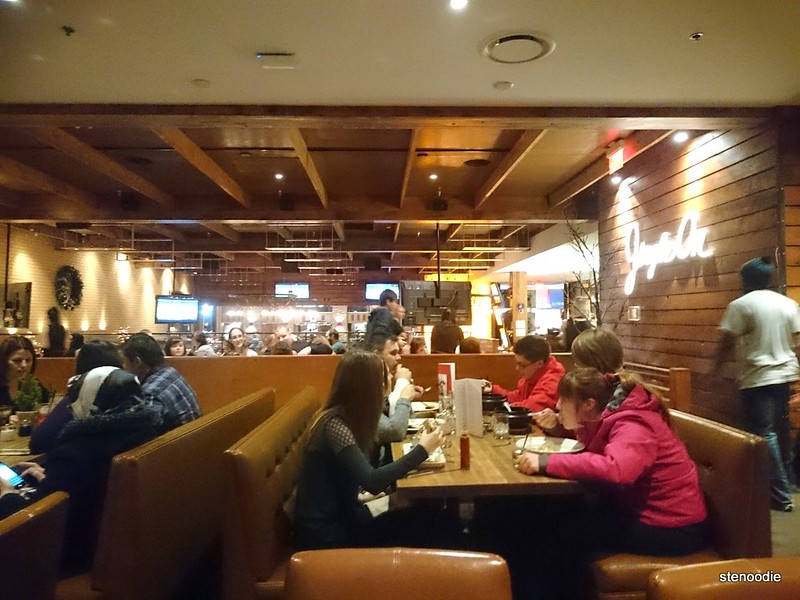 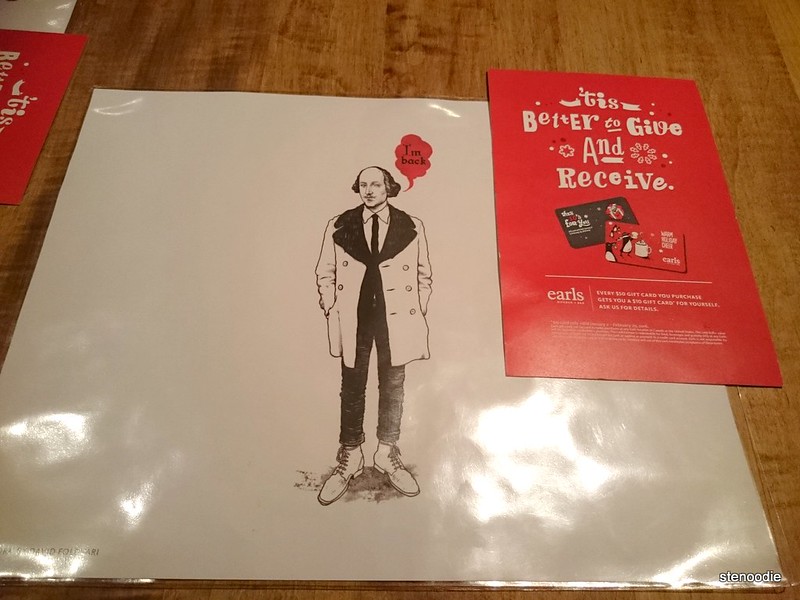 View menu behind his placemat!

Three of us had had a late lunch at State & Main so we weren’t particularly starving, but the rest of the gang were famished.  We had booked a table for later in the evening but after checking in with the hostess and leaving our number, they were able to text us to let us know that there was an earlier table for us.  Yay!

Two of our friends had been to Earls before and recommended the Dynamite Roll sushi appetizer to share.  We ordered this in addition to the Tuna Tostadas appetizer.  Since the Tuna Tostadas came in four and there were six of us, we ordered an extra two to share equally.  It was neat that the placemat also doubled up as the menu so all you had to do was flip it around to see what to order. 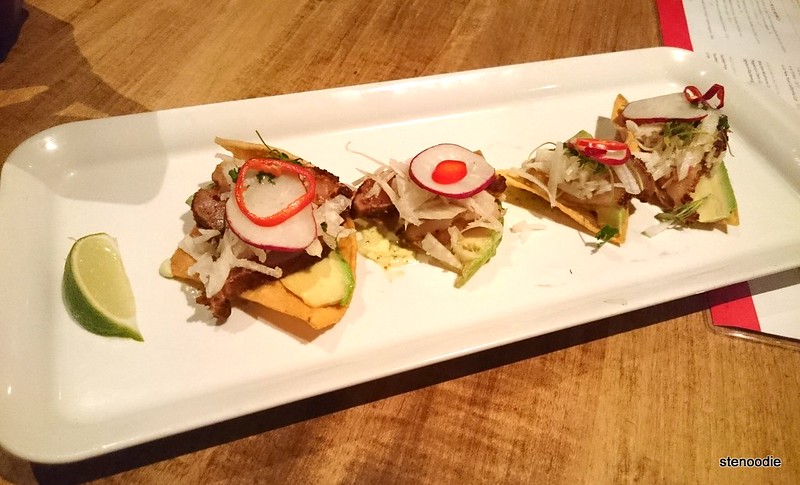 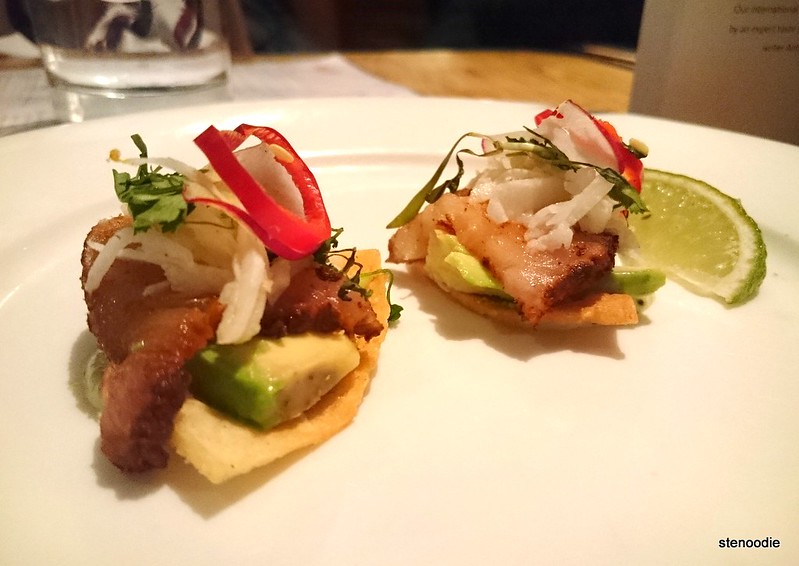 We ordered extra two so that everyone could try one 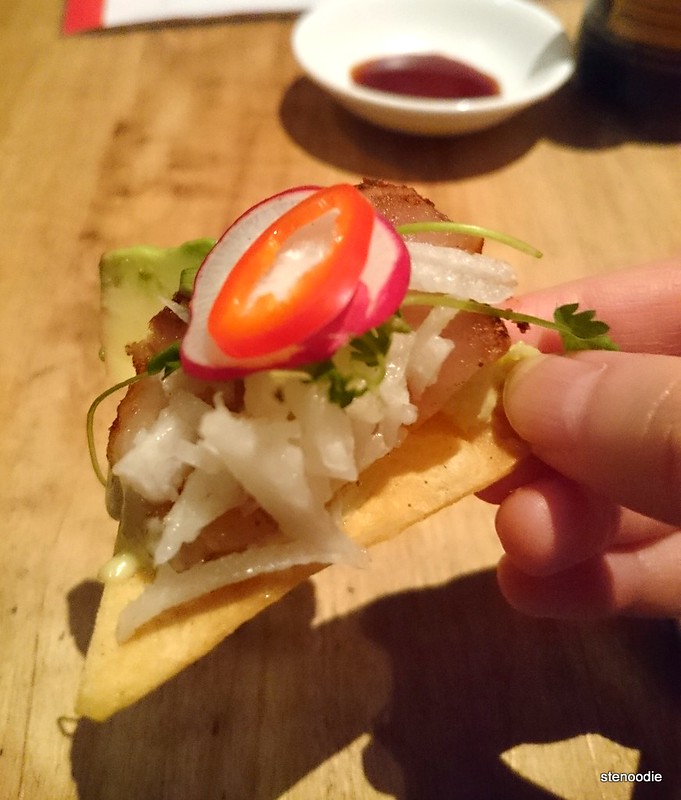 The Tuna Tostadas contained chili rubbed albacore tuna, cilantro aioli, avocado, and jicama slaw on a crisp corn tortilla.  It was a neat little package of flavour on a crispy chip.  It was quite spicy too! 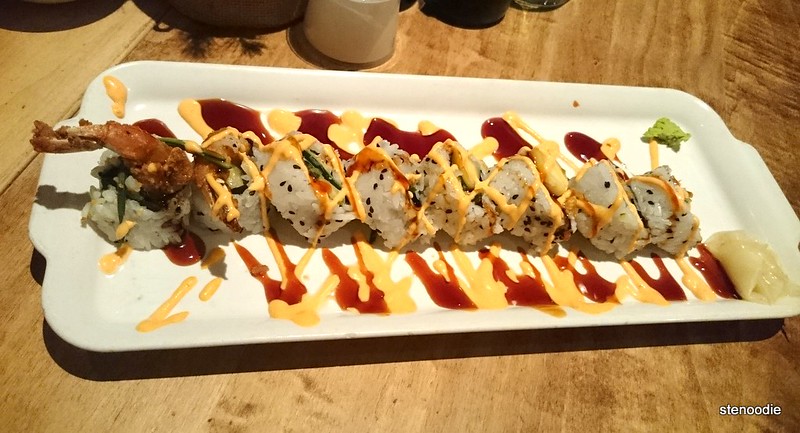 For my main, I ordered the Lois Lake Steelhead Salmon since I was still quite full from lunch and didn’t want any more meat.  When the server took my order, she asked me if I wanted the aioli on the side or on the salmon.  I asked for the aioli to be on the side.

We didn’t have to wait too long for the food to arrive.  There was also free wifi provided by the mall and the restaurant.  Two runners arrived with our food on a tray.  One of the runners asked which of us ordered which dish and they proceeded to put the plates in front of us.  What annoyed me was that three of us at the table ordered the Lois Lake Steelhead Salmon, and as you remember, I asked for my aioli to be placed on the side.  One of my friends said for her aioli to be placed on the salmon while my other friend asked for his to be on the side.  All three plates of the salmon were served with the aioli on the side.  The fact that our preferences weren’t even considered made me lose respect for the restaurant.  Why did the server even ask us about our preferences if they just ended up serving all the plates of salmon with the aioli on the side?  I really didn’t like that.  (Personally, having the sauce on the side or on the fish doesn’t really matter.  It was more the fact that the server asked us for our preference and didn’t even follow through on a customer’s preference that irked me.  If she had never asked, I wouldn’t have minded where the aioli was at all.) 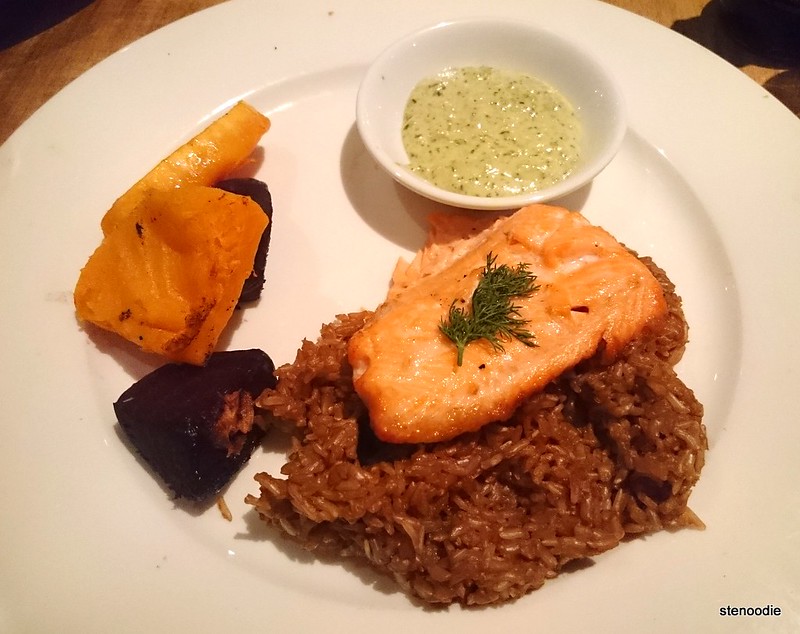 Presentation points for the mains also were low.  The Lois Lake Steelhead Salmon came with feta, caper and dill aioli, brown basmati rice, and seasonal vegetables. I think a dish like this could easily be made more presentable, but it really didn’t look that nice.

The texture of the salmon was pretty good, but it really relied on the caper and dill aioli for more flavour.  The brown basmati rice was incredibly salty even for my taste, and the seasonable vegetables were some yams and beets.  The jam and beets were fair.  Since the entire dish was a little dry and a little salty, I counted on the vegetables for the juice.  Needless to say, other than the salmon, this dish was quite disappointing.

I tried the steak that the boys ordered and it was just so-so. 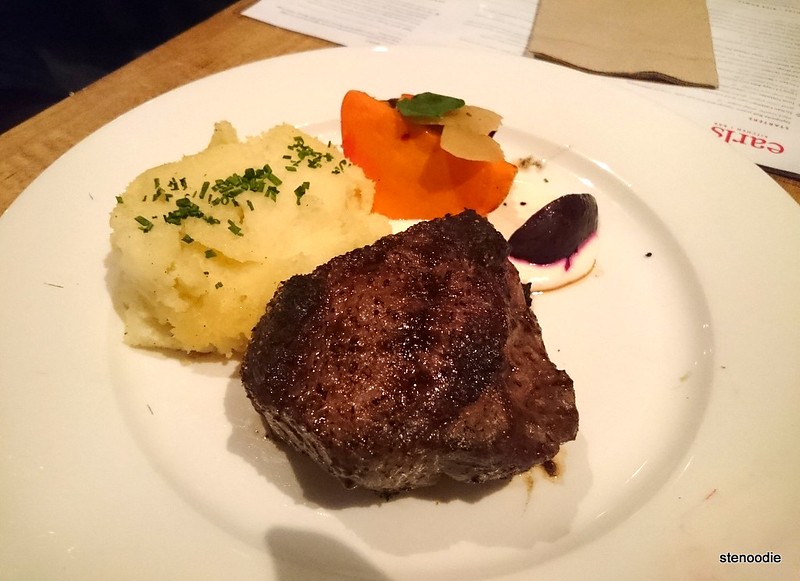 I also tried a bit of the Cajun Chicken that Melissa ordered and it was very seasoned and salty too. 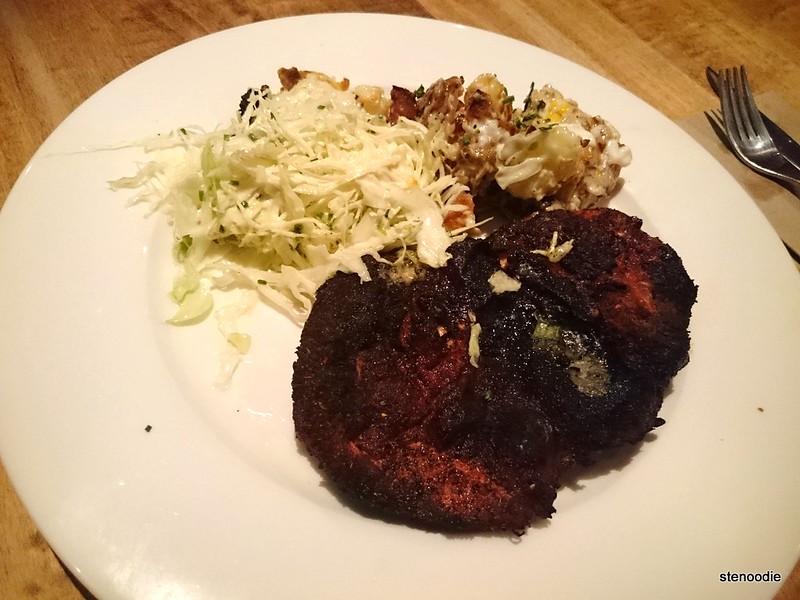 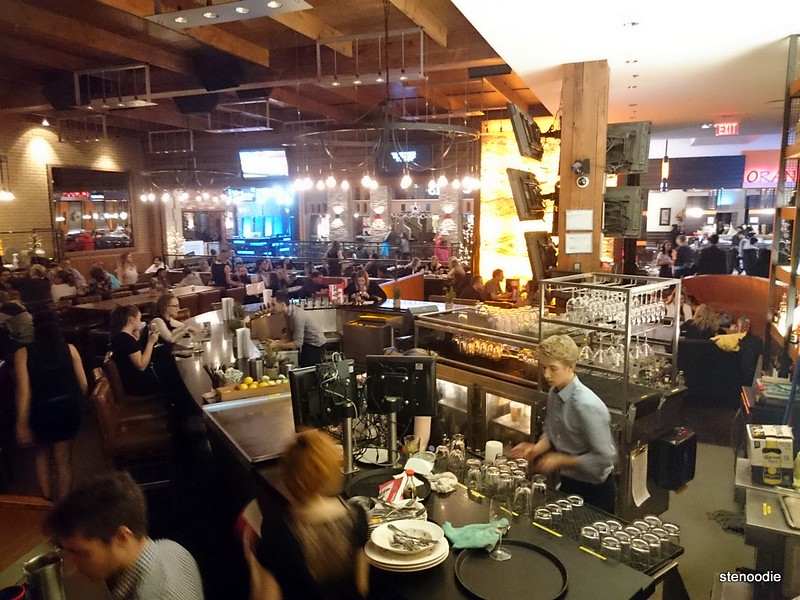 It was huge! This is the dining area close to the entrance

Unfortunately, many of us left the restaurant that night with the memory is that food was too salty and not tasty.  It was unfortunate because I really thought that Earls would have done better than that.

Have you been to Earls Kitchen + Bar before?  What was your experience like? 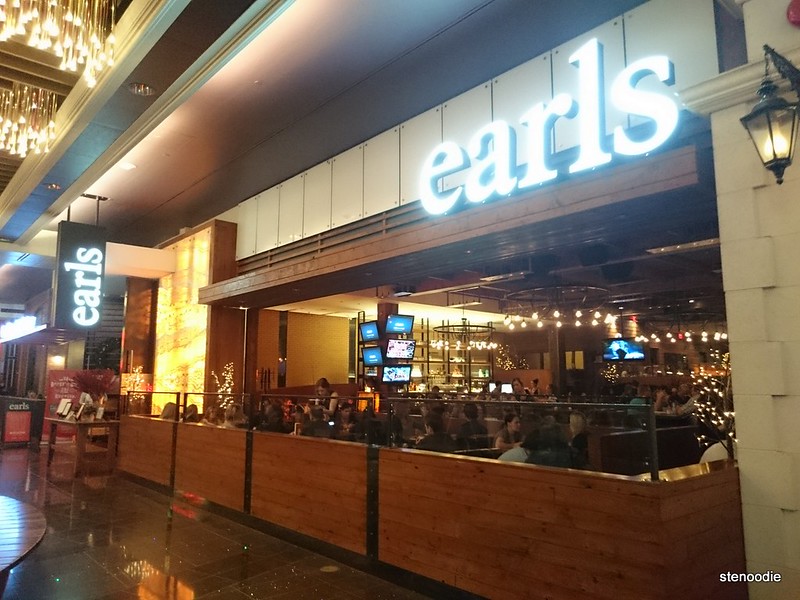 Earls inside of West Edmonton Mall