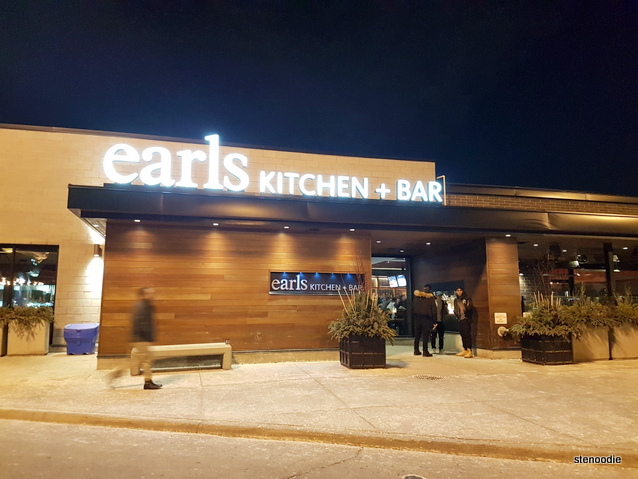 After our play time at Dave & Buster’s, we were in search of dinner.  It was prime time Saturday night and all the restaurants around the area were packed.  Despite the hostess informing us of a 20-minute wait, we decided to eat at Earls Kitchen + Bar.  I had previously been to the Earls in Edmonton at the West Edmonton Mall and recalled it with dissatisfaction because my salmon entrée was extremely salty.  I was curious to try this restaurant again due to it being a popular North American chain.

While we were waiting for our table, the hostess served some complimentary cheese pizza.  This was a really nice gesture and I’m sure that everyone waiting with us appreciated it too.  (I didn’t take photos of the pizza.)  We were also given glasses of water while waiting.  During this wait time we also got a copy of the menu and picked out what we wanted to order to save time. 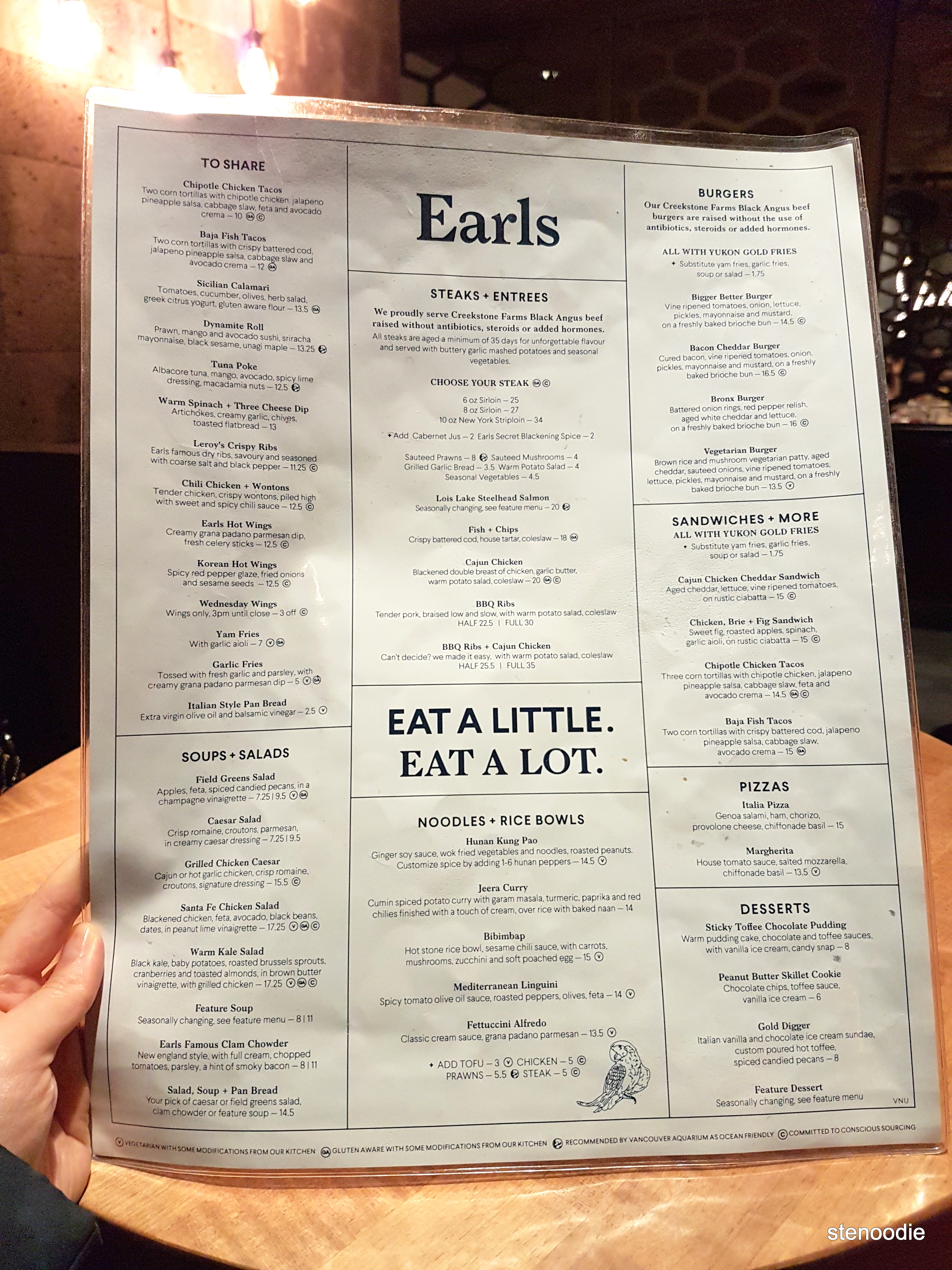 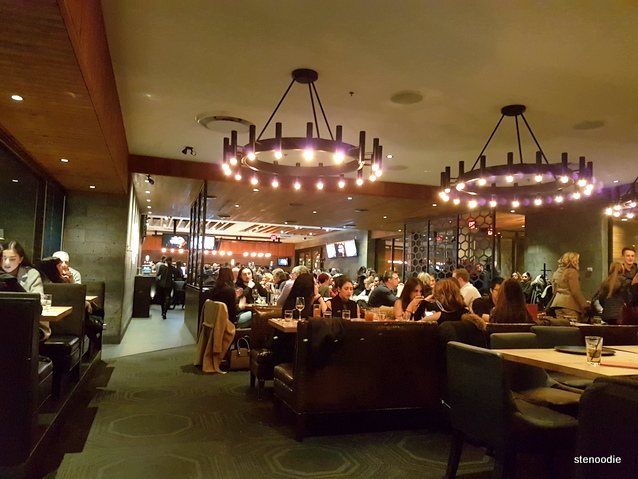 It was really nice inside and lots of space and tables

It actually took about 30 minutes to receive our table; longer than the anticipated wait.  However, we received our own booth table by the corner near the kitchen and I was very happy with this seat.  We like corner booth tables and I liked seeing the servers bring out freshly made food from the kitchen to the corresponding tables.

Our female server was very friendly and prompt with our orders.  The table itself was a little small though and once everything arrived, the whole table was filled up. 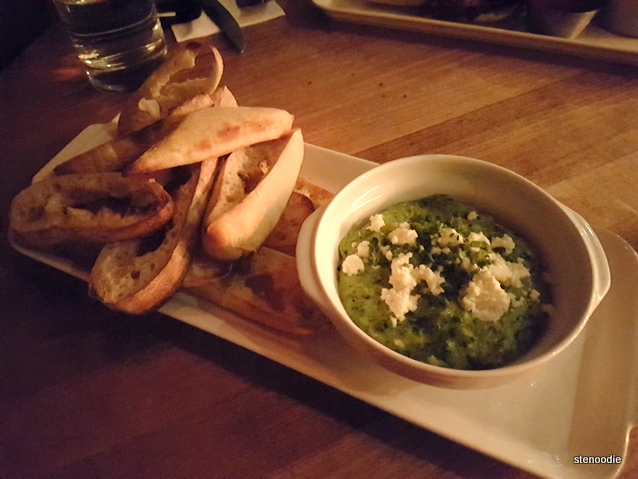 The Warm Spinach + Three Cheese Dip was quite underwhelming.  I love cheese dips but this one didn’t satisfy me at all.  It was made with artichoke, creamy garlic, and chives, and served with toasted flatbread.  I didn’t like this Three Cheese Dip because it was so heavy and dense.  There was a lot of it (so the portion size was good), but since it was so thick, it was hard to enjoy a creamy dip.  It was definitely cheesy though but could have tasted better if the consistency wasn’t so thick.  The toasted flatbread was all right; I found it too hard but Ken liked it. 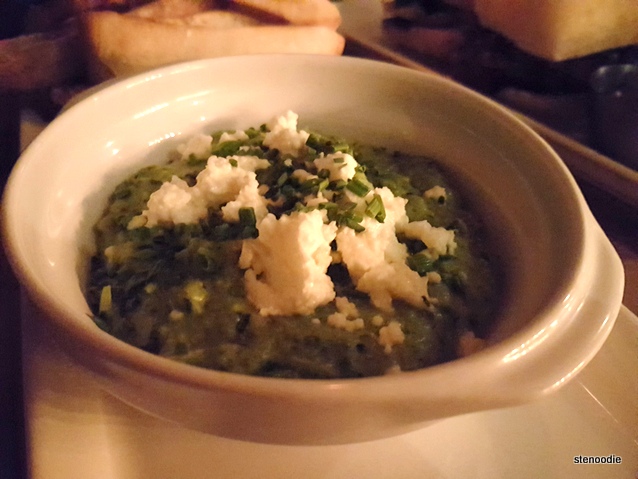 Close-up of the Three Cheese Dip 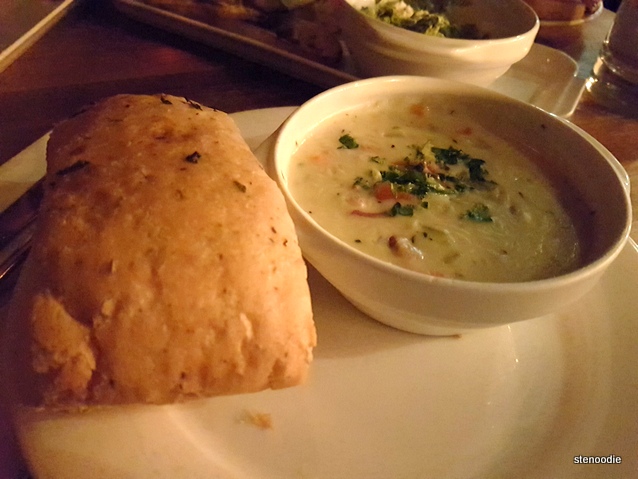 Since we had eaten a small appetizer before coming and I wasn’t starving, I ordered the Salad, Soup, + Pan Bread.  I really just wanted to try their clam chowder soup and have a salad.  I didn’t care for the included Pan Bread at all.  For this item, you could pick between a Caesar or Field Greens Salad and Clam Chowder or their feature soup.  The Earls Famous Clam Chowder was New England style with full cream, chopped tomatoes, parsley, with a hint of smoky bacon.  It was available on the menu in a small or large size ($8 and $11 respectively).  I guess for this soup, salad, and bread combo, they served the small size. 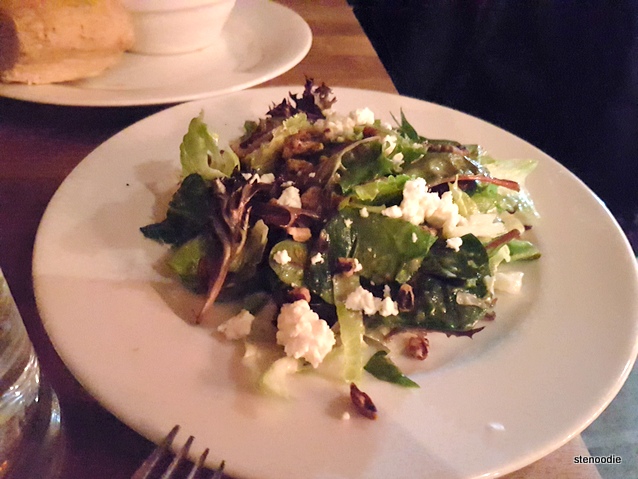 I enjoyed the Field Greens Salad.  There was balsamic vinegar with some goat cheese and toasted nuts and the salad itself was fresh.

I wasn’t a fan of the Clam Chowder because I felt that it just wasn’t very good.  There were a lot of chunks of vegetables in it; I didn’t expect that.  The soup itself was a little thin with all of the ingredients sinking to the bottom.  There were a fair number of clams in it.  The consistency was also quite blah.  It was too bad because I think Campbell’s clam chowder tastes better. …

The Pan Bread was a big fluffy piece with herbs embedded in it.  Ken surmised that it was probably thyme. 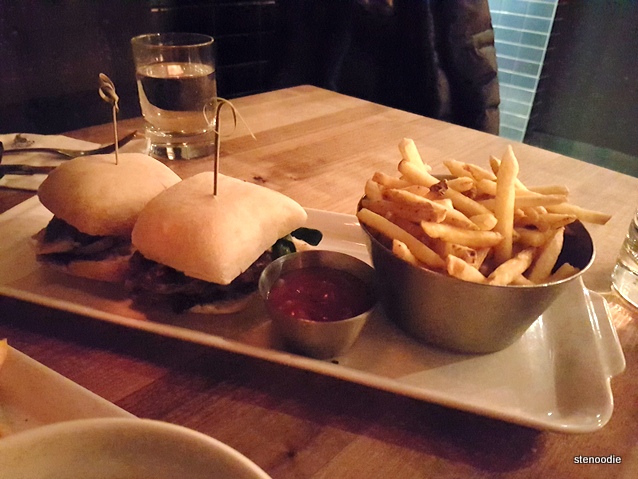 Ken ordered the Chicken, Brie, + Fig Sandwich.  It had sweet fig, roasted apples, spinach, and garlic aioli on rustic ciabatta served with Yukon Gold Fries.  The Yukon Gold Fries were short and soft; pretty good.  The sandwich was also good and unique with its selection of ingredients.  Ken really liked the fries and the sandwich.

Now that I’ve had a second visit to an Earls, I wonder if I’ll be back for more in the future… 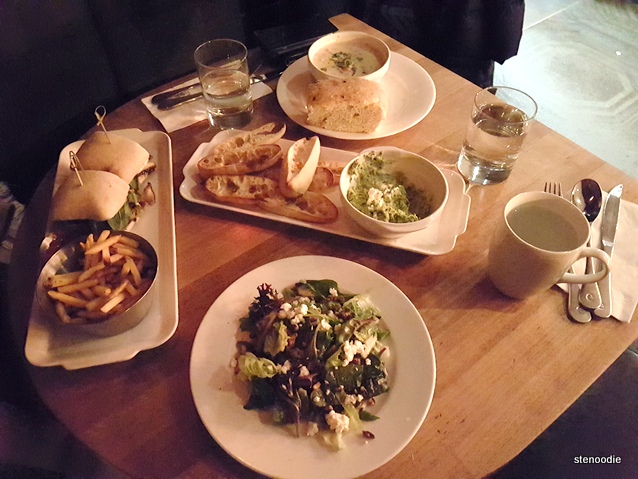 Our table full of food! ❤