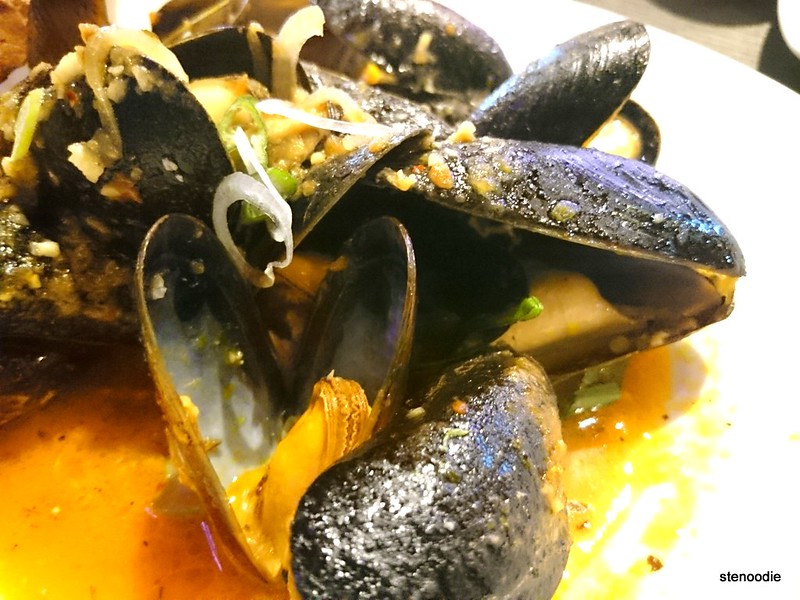 Today is the second day of Winterlicious 2016 and was my first Winterlicious meal of the season (and only one this year).  Unfortunately, we found out that the first restaurant that we had intended to visit didn’t offer a prix fixe lunch on a weekend, so we ended up going to Rally Sports Bar & Smokehouse for Winterlicious lunch instead since close by.

Rally Sports Bar & Smokehouse serves primarily as a sports bar for casual lunch and dinners and is also a perfect spot for watching games with friends.  They have many wall-mounted TV screens for you to enjoy a game over food with friends.  They also have a gigantic party room that can host a large group of people; maybe even from 50 to 100 people.  In fact, during the time that we were here for lunch, a surprise party was taking place in the party room. 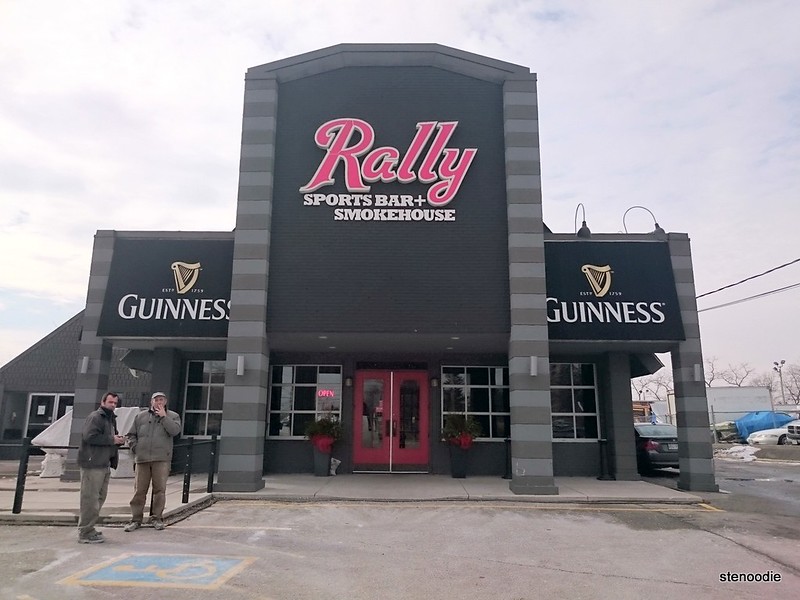 This is a huge restaurant! They also have a gigantic parking lot for lots of guests

I called ahead time to make sure that they had space for Betty and I in case they were booked up for the Winterlicious lunch time, but they had a table for us.  Awesome!

This space is also really good for kids too. They have a weekly magician show for kids!

This sports bar wasn’t what I expected because it was a very cozy, casual, low-key, yet sophisticated restaurant that served really good Southern and BBQ food in addition to regular bar food on their menu.  All of the food that we had that day were presented really nicely and unlike a usual sports bar where a basket of wings are just thrown haphazardly on the plate.

There weren’t many people here at the time when we arrived but it soon picked up and more tables filled up.  The hostess also served as our server and I believe the manager was the one who served us our mains and appetizers.  They were all very pleasant and accommodating. 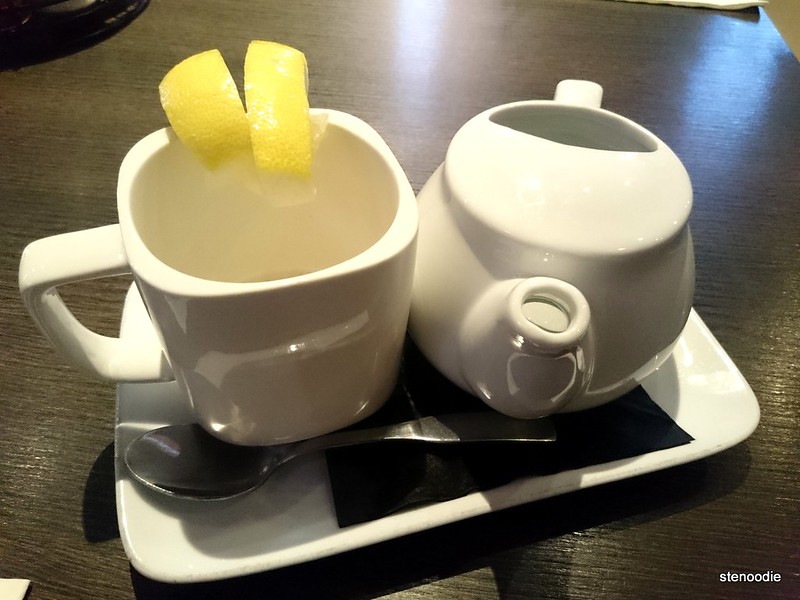 I liked how the hot water and lemon that I got presented in this setup looked fancier than usual. 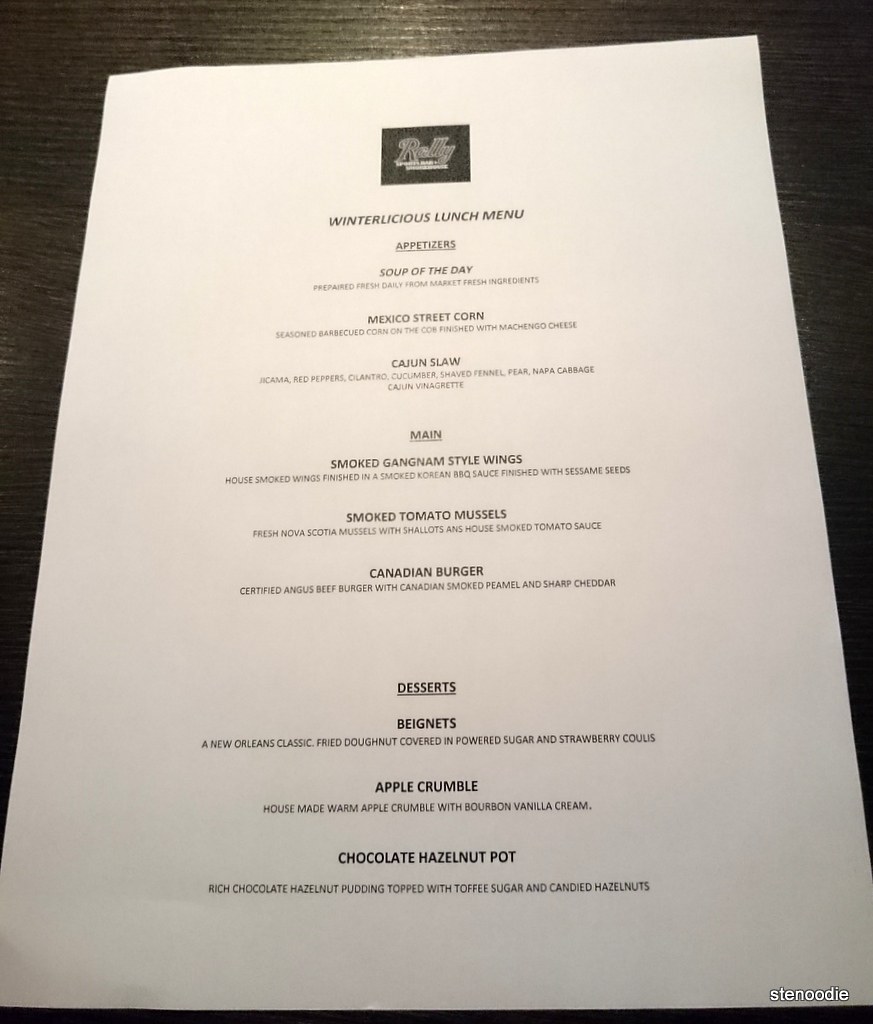 From the $18 prix fixe lunch menu, I chose the Cajun Slaw as appetizer, the Smoked Tomato Mussels as main, and the Beignets as dessert.  I really liked the offerings here as I also really adore Cajun and Southern food!  Betty ordered the Soup of the Day (an apple and leek soup), the Smoked Gangnam Style Wings, and the Chocolate Hazelnut Pot.  It’s awesome to dine out with friends who have similar tastes with you because we ended up sharing the main and desserts so that we could try out the restaurant.  Yay, foodies! 😀

It didn’t take long for our appetizers to arrive at all!  The Soup of the Day, apple and leek soup, was very creamy and it smelled amazing.  I tried a little bit of it and enjoyed it.  Betty said that there was a slight aftertaste that was interesting. 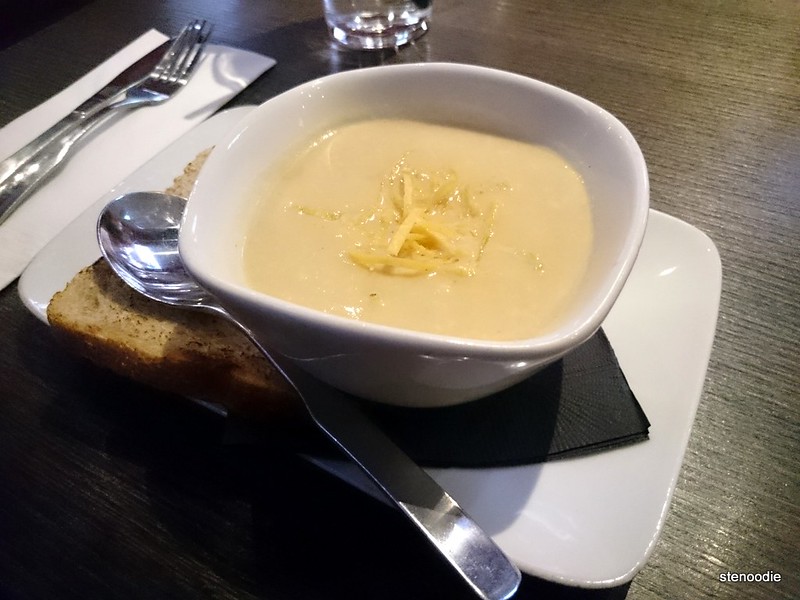 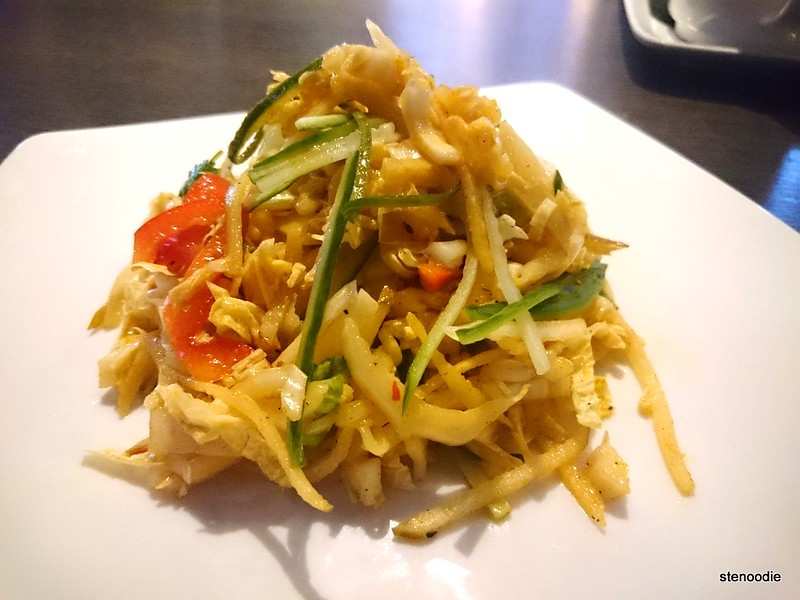 The Cajun Slaw contained jicama, red peppers, cilantro, cucumber, shaved fennel, pear, napa cabbage, with a Cajun vinagrette.  It looked really nice on the plate and it was surprising how many different ingredients were in this small slaw appetizer.  At first taste, it was very refreshing and crunchy due to the number of crunchy fruits/veggies in here.  You soon get an aftertaste of spice!  It was quite spicy but not to the point that I couldn’t eat it.  It was definitely a unique slaw appetizer that I’ve never had before! 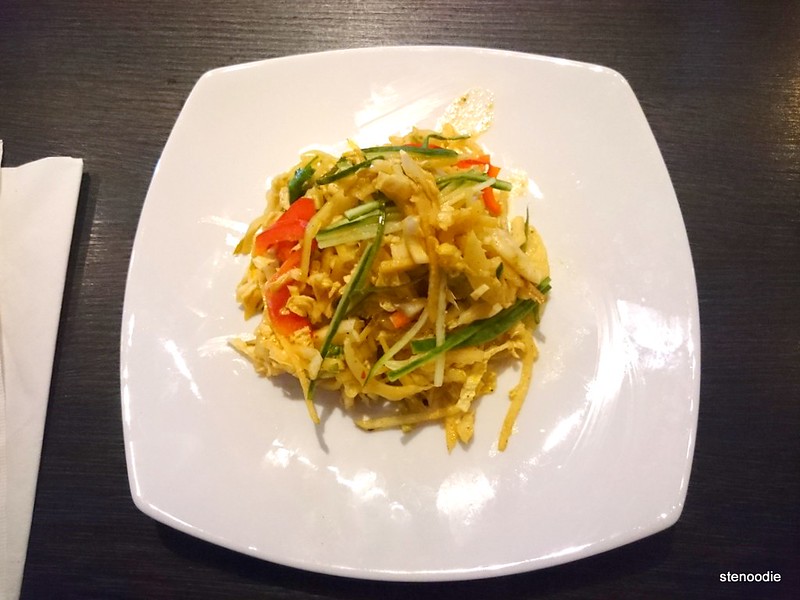 The presentation of this slaw is worth 10 points!

It took a bit of time for the mains to arrive (probably because I didn’t finish my Cajun Slaw and left it on the table and the server thought I wasn’t done with it yet — in fact, I wanted to save it to enjoy with my main). 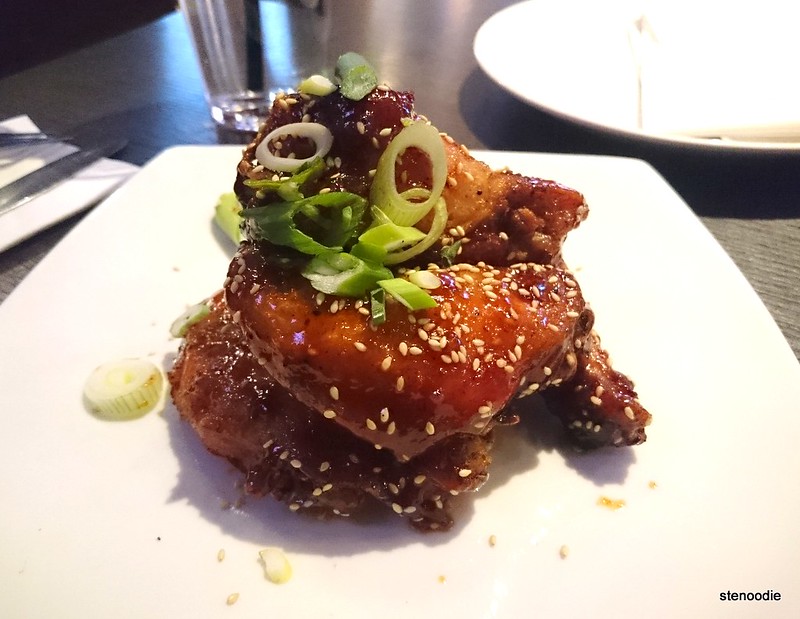 Like I mentioned, the food was presented so nicely!  Even the wings were placed together and assembled to look like a small mountain.  The house smoked wings were finished in a smoked Korean BBQ sauce and finished with sesame seeds — perhaps this was why these were called Smoked “Gangnam” Style Wings.  That is definitely a head-turner and makes you want to order it to try.

I really liked these wings!  The smoked Korean BBQ sauce was tangy, a little bit sour, with a tiny bit of smoked flavour and spice.  It was very unique and quite delicious! 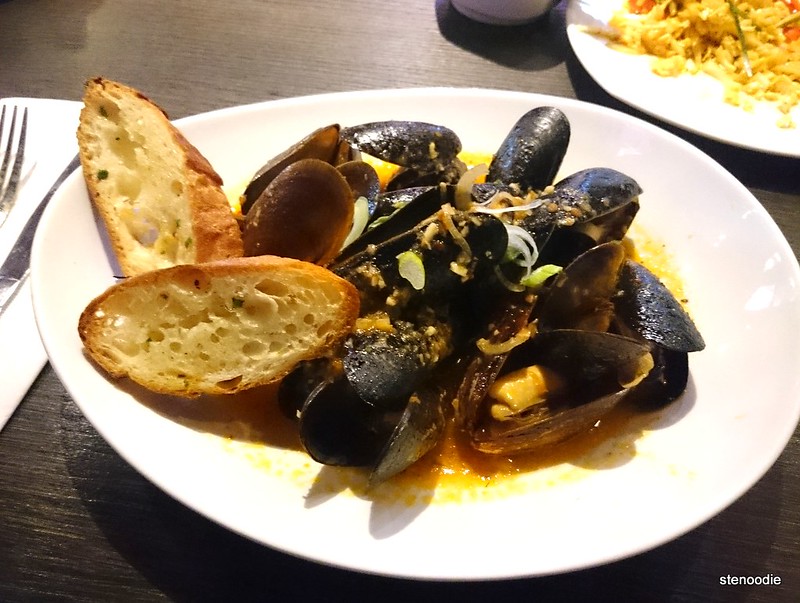 The Smoked Tomato Mussels that I got were ‘fresh mussels from Nova Scotia’ and slathered with house smoked tomato sauce and two slices of buttered bread on the side.  These Nova Scotia mussels were quite fat and plump but I didn’t think they were very fresh — they fell apart when I tried to take them out and just didn’t taste fresh.  The buttered bread was extremely crunchy and tasted good.  The house smoked tomato sauce was a lot saltier and spicier than I anticipated though — I think the dish would have tasted better either with more fluffy bread to soak up the sauce or with plain white rice.  Either way, I still enjoyed this dish because I thought it was a very nicely prepared sauce (albeit salty) with the mussels. 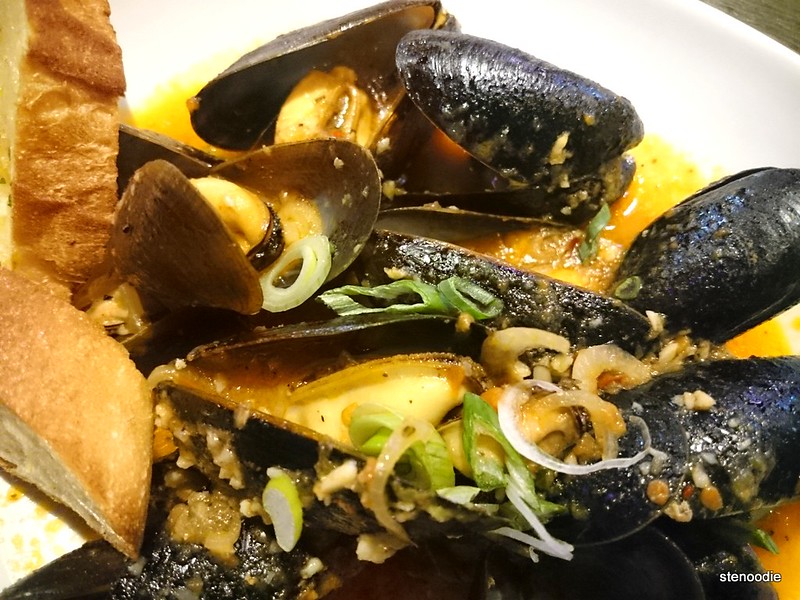 Close-up capture — I loved the shallots in this! 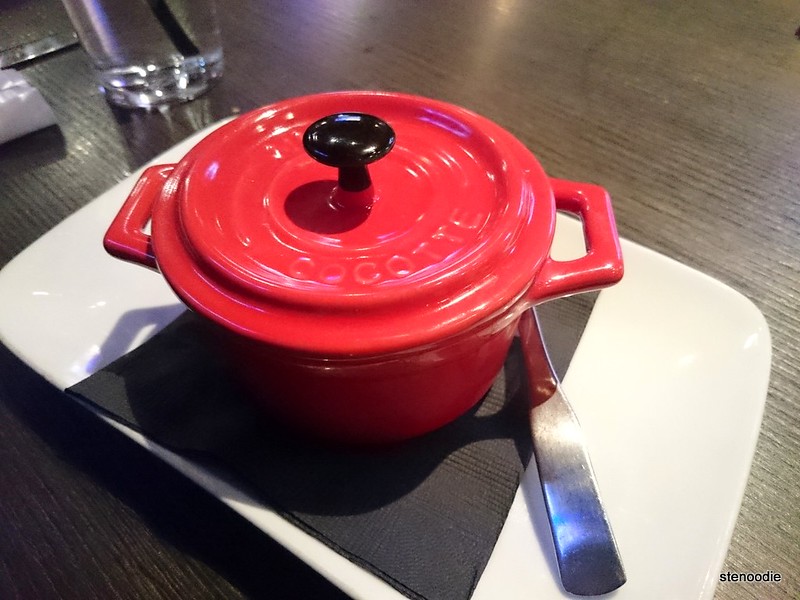 After that, the desserts arrived.  The Chocolate Hazelnut Pot came in a little cute red pot that we both thought was hot for some reason — in fact, it was a cold chocolate hazelnut pudding.  It was topped with toffee sugar and candied hazelnuts.  Surprisingly, this Chocolate Hazelnut Pot was delicious!  I am a chocolate fan so this rich chocolate hazelnut really appealed to me!  It was very rich, smooth, and creamy.  I also enjoyed the candied hazelnuts too!  Normally, I don’t like nuts that much.  This was a really great tasting dessert! 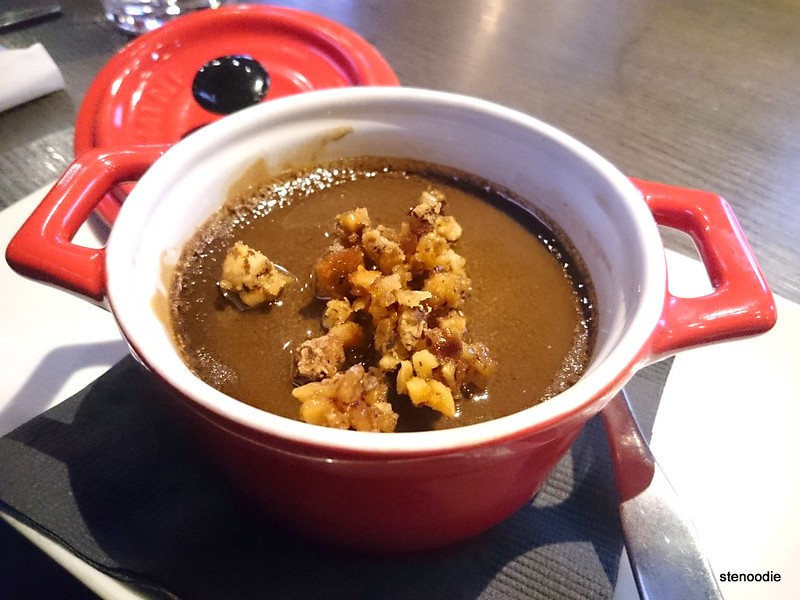 These candied hazelnuts fit so well with the creamy and rich chocolate pudding! 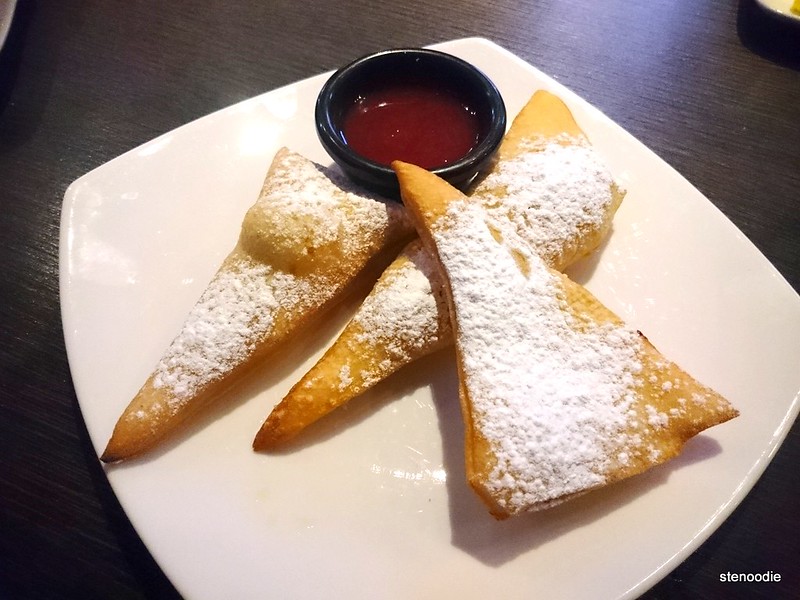 It was nice to enjoy a $18 prix fixe Southern/BBQ/Cajun lunch in the midtown area.  This was an unexpected visit too and I’m glad that Betty had this restaurant in mind on the spur of the moment.  It’s so nice to try a new restaurant and ended up having a great meal during the process! 🙂

Unfortunately, this is my one and only Winterlicious entry this year (unlike one year when I went to 9….), so I hope all of the foodies out there continue to enjoy the Winterlicious experiences this season! 🙂  Share your pictures and food experiences with me!

Have you been to Rally Sports Bar & Smokehouse before?  What was your opinion of it?