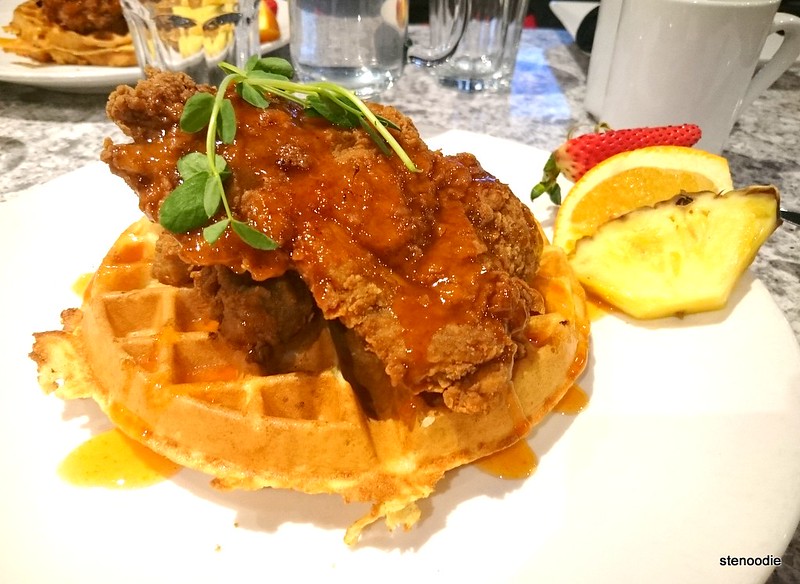 I was originally going to tack this review on to my original Smash Kitchen & Bar review, but then I remembered this was really part of an annual event that we have, so it deserves its own post.

Marilyn, Alice, and I meet up every year around Christmas time to catch up on the year’s goings bys and events.  This year, we were a little late and ended up meeting up in January, but no worries, it was still really nice to catch up. 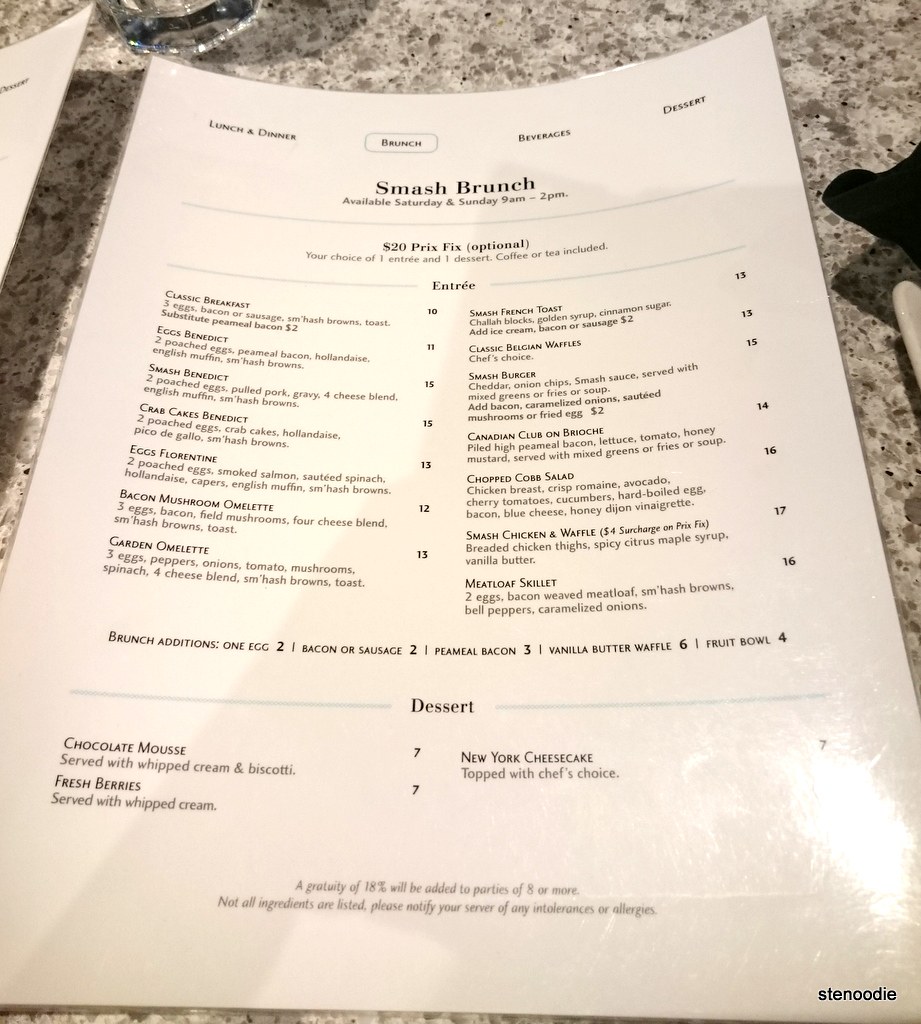 We had brunch at Smash Kitchen & Bar, a place I’ve visited before for a prix fixe lunch with a friend.  They are a really nice casual restaurant to visit for a meal with your friends, dates, or even a family outing.

On this visit, we all ended up ordering the Chicken & Waffles that they had on their brunch menu (they have brunch on Sundays from 9 a.m. to 2 p.m.).  There were a lot of people here and if we didn’t arrive at 11:40 a.m. or so, we would have had to wait for a table.  They were packed here!  It was lively and a great environment to dine in on a cold winter’s morning.

The three plates of Chicken & Waffles arrived very quickly after we had placed the order with our server.  It was a nice big stack of two deep fried chicken steaks on a waffle with some vanilla butter and spicy citrus maple syrup on it.  It was a beautiful presentation!  There were also some fruits on a stick on the side. 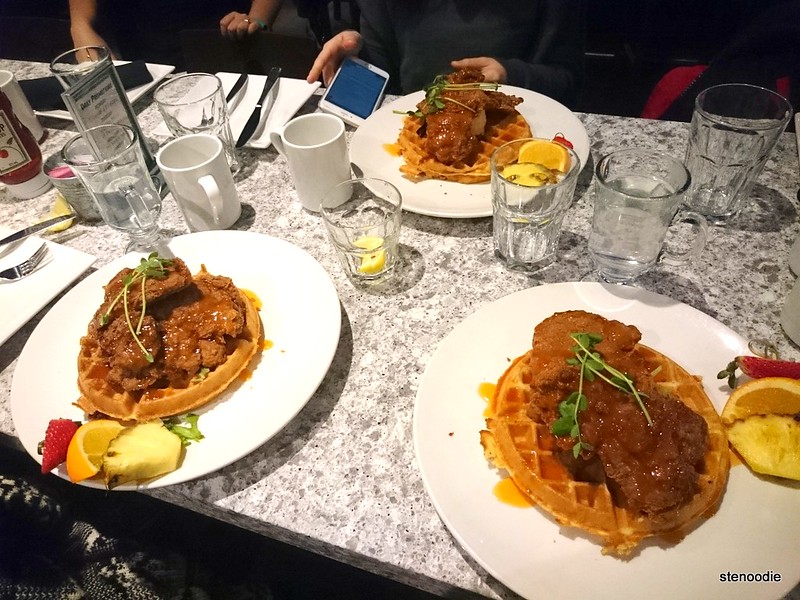 We all wanted chicken & waffles! 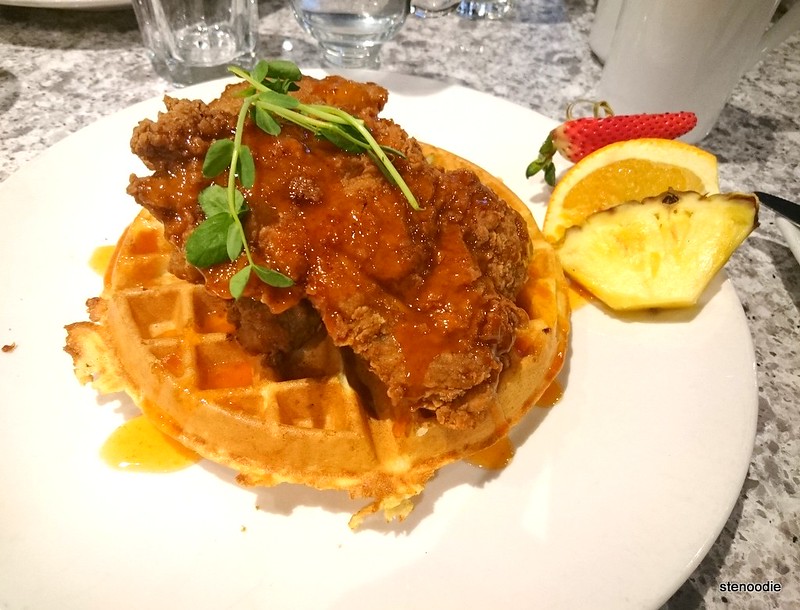 I remember having a really delicious chicken & waffle at Inspire Restaurant.  I was very pleased to see that Smash Kitchen & Bar also makes Their Chicken & Waffles very deliciously too!  At first, I found that the spicy citrus maple syrup was a little too sweet for me; it was definitely a little citrus-y — you could tell that there was some kind of orange taste in the syrup.  But afterwards, I really appreciated the crispy and tender fried chicken.  The waffle was not bad either.

Thanks to my subscription to entertainment.com, we were able to get one free plate of chicken & waffles (the coupon offered one free lunch entree after getting the first one).  Yay!  I love deals on food. 🙂 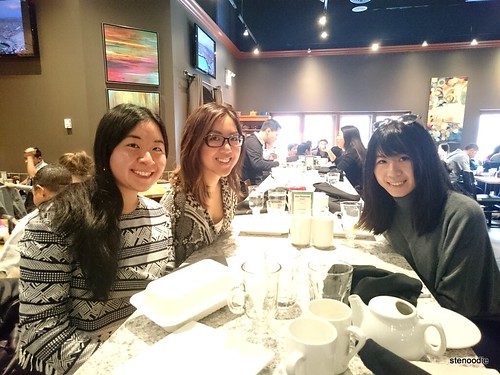 We had a really good chat and surmising over what happened in 2015.  We always end up with the same aspirations each time we depart.  Cheers to a prosperous, happy, healthy, and most loving 2016 for all of us!  (Also, we realized that it was the 10th anniversary of when we started this tradition! :O )

Have you been to Smash Kitchen & Bar before?  What did you like there?