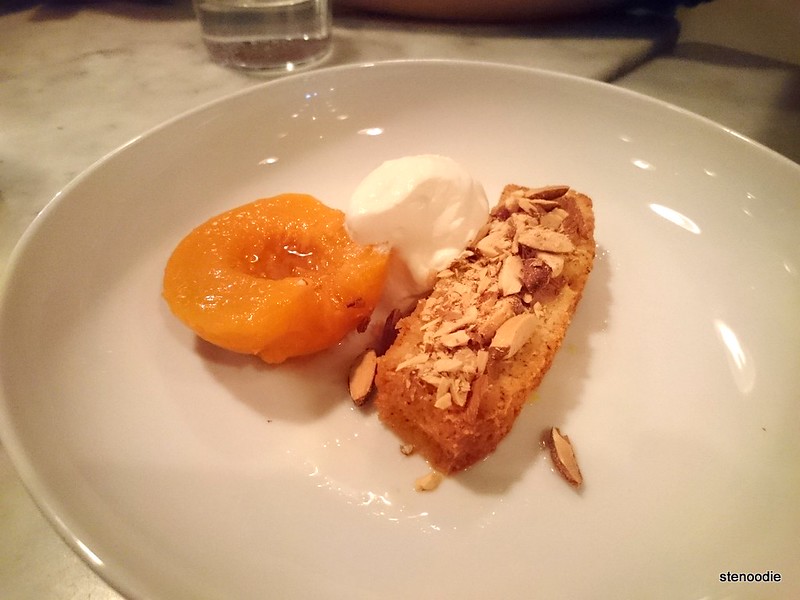 According to Google, Dandylion is a “rustic-industrial spot [that] serves Eclectic fare that marries unusual Asian and European flavours”.  I wasn’t sure what to expect from this restaurant that has a demanding reservation list located on Queen Street West in downtown Toronto.  We booked our table for six people way back in January of this year (that’s almost three months in advance!).  I have not delved into the arena of booking restaurants that early before to dine at.  I guess I am ‘starting’ to explore the really eclectic high-demand restaurants in Toronto… 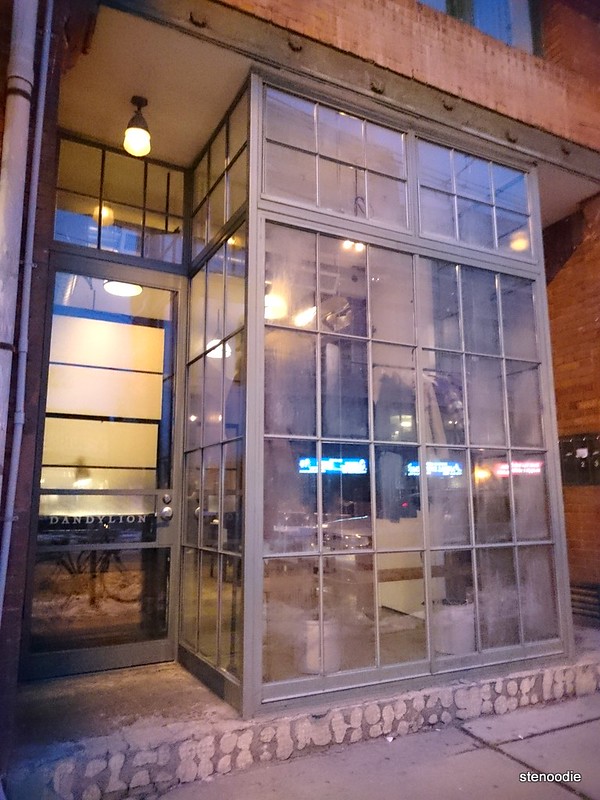 Our dinner reservation was booked for 6:30 p.m.  I walked in right on time and the hostess was able to bring me to my table.  There were already a lot of diners seated and enjoying their food.  Dandylion has a long dining room and was a former industrial spot.  They have an open kitchen so you can eat exactly who is preparing your dish and how they make it.  It was quite fascinating to watch actually.  (The entrance of Dandylion is a little hidden; when you walk on Queen Street West, look at the numbers and once you see 1190, take half a step back and you will see the small letters of Dandylion on the door of the restaurant.)

Before long, our other foodie friends arrived.  One couldn’t make it so we ended up being a party of five. 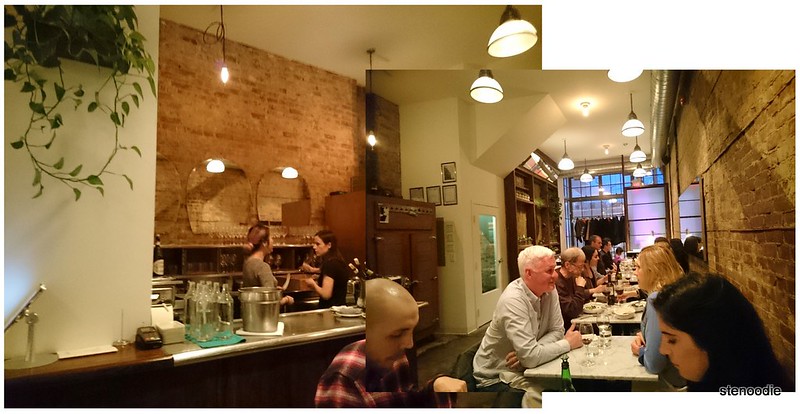 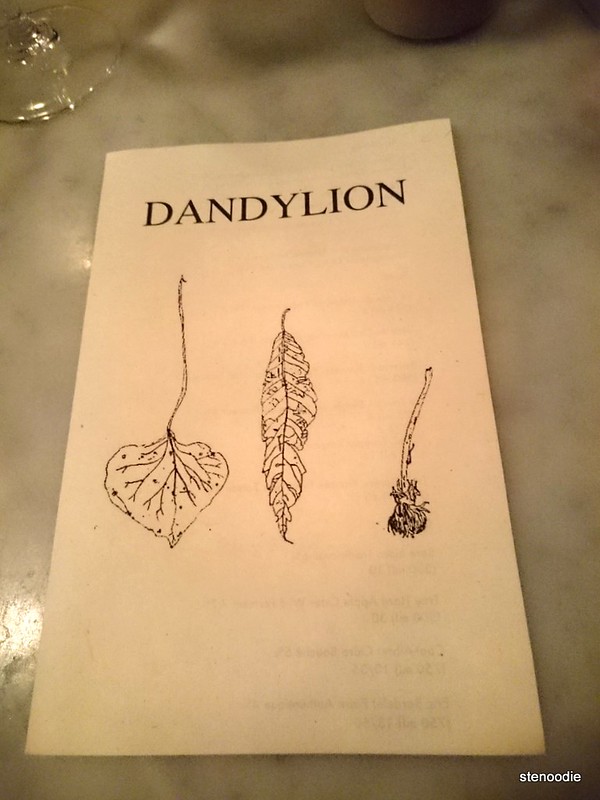 The server was attentive all night long and made sure to refill our water (and wine) glasses.

Since I didn’t know much about Dandylion at all and hadn’t had time to peruse their website before arriving (neither did I read any online reviews or blogs), I was quite surprised that the menu only had three selections for each course.  (Actually, when I first opened the menu, I thought it was only a drinks menu because the first page contained all drinks and my eyes completely skipped over the short menu list on the second page XD.) 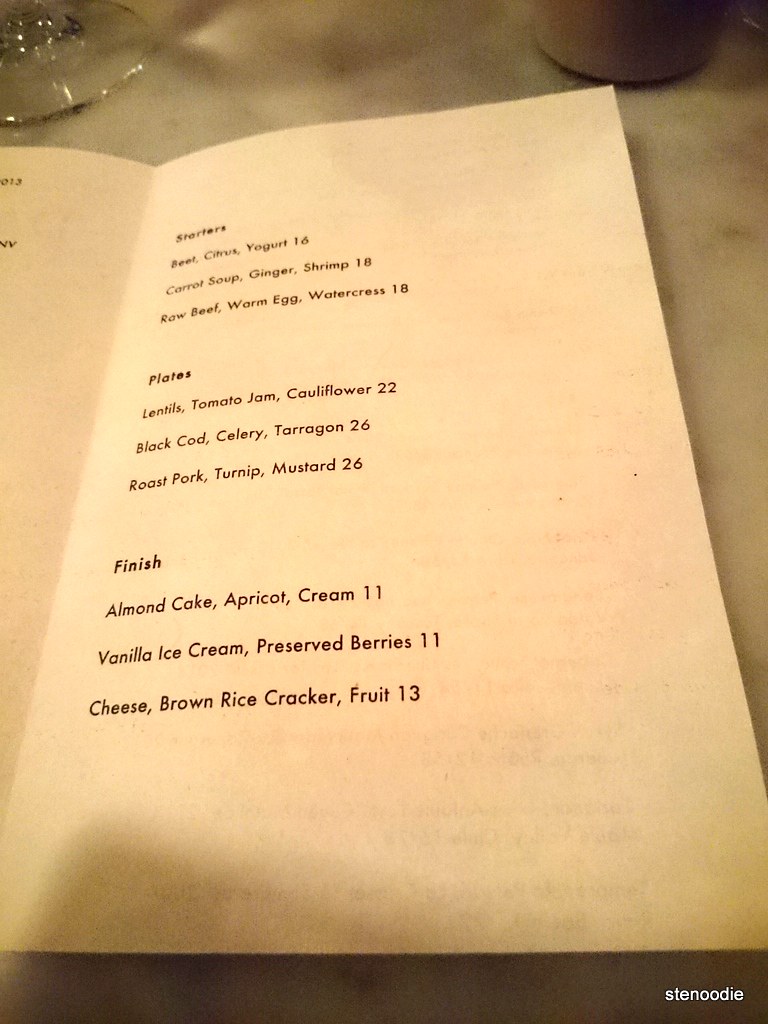 The simplest menu I’ve ever seen

I wasn’t sure what to make of the short menu.  I’ve never been at a restaurant with such limited choices before!  It was good in the sense that if you are a person who gets overwhelmed with choices and don’t know what to choose, you can choose something easily.  However, for me, it was such a surprise.

While the others enjoyed a Pinot Noir, I just had some regular hot water to pass my night.  I ordered the “Raw Beef, Warm Egg, Watercress” for my starter and the “Roast Pork, Turnip, Mustard” for the main.  It seems that they change their menu every so often and they also don’t reveal their menu on their website at all.  As a matter of fact, if you visit their website, it is just a landing page with the restaurant’s name, logo, contact information to book a table, and that’s it.  There is nothing else to click on for you to look at like pictures or menu.  It’s quite interesting (and mysterious)! 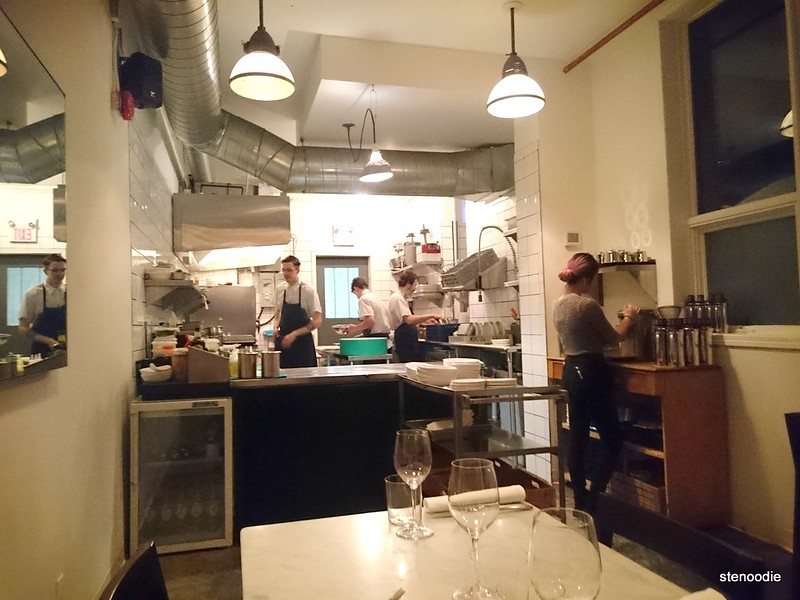 Open kitchen where you can see the staff cooking and prepping

After we ordered our food, the server arrived with two baskets of bread and fresh cheese on our table.  The bread was baked in-house (I forget what was said about the bread) but the cheese was definitely fresh.  It was really good and creamy! 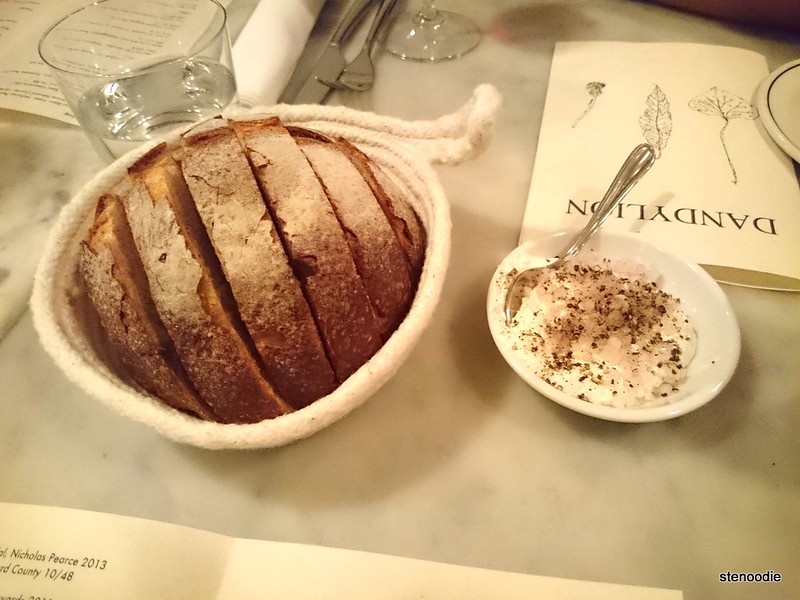 Our starters arrived and all of us took some photos of the food first (naturally).  We also took a bite of each others’ plates to see what the other starters tasted like.  Yeah!  This was my kind of sharing scene!  (I actually wish we shared all the starters… I would have saved some money.. more on that later.) 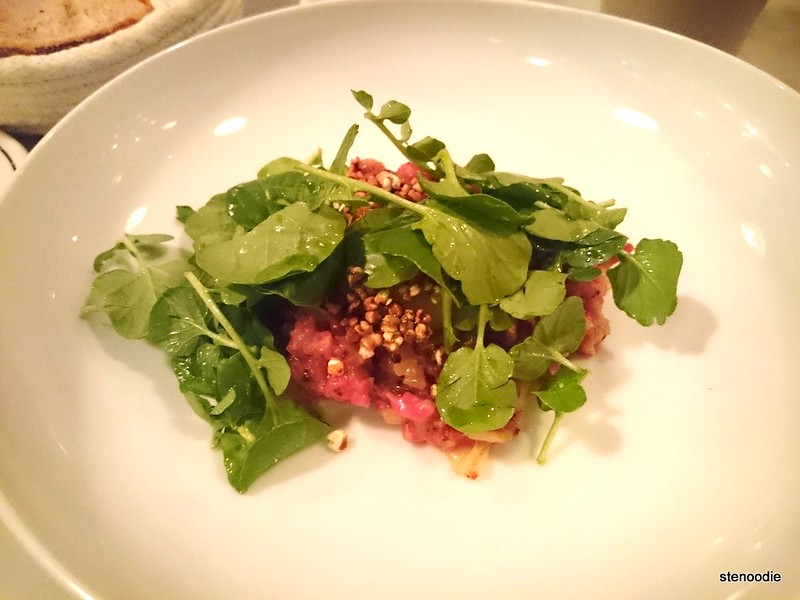 My “Raw Beef, Warm Egg, Watercress” was a large plate of beef tartare essentially.  There were lots of chunks of nuts or what tasted like quinoa within the raw beef.  It was quite an interesting texture.  I absolutely love beef tartare and found that this raw beef was quite soft and meaty.  I liked it.  However, I found that the crunchy bits (even though made the dish more interesting) took away from an original beef tartare dish.  The watercress was dry and added another texture to the dish. 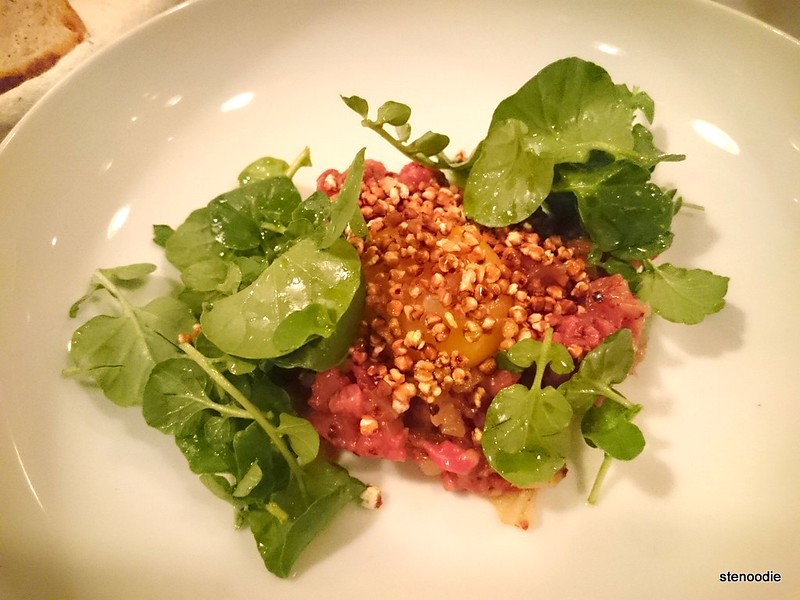 Moving apart the watercress, you can see the warm egg within the raw beef

The “Beet, Citrus, Yogurt” was a surprisingly starter.  The beets were so fresh and tasted so good! 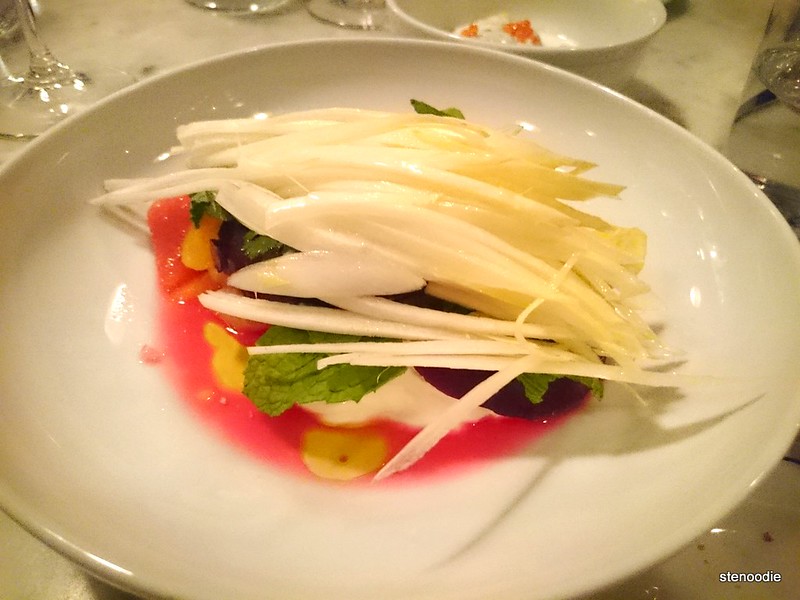 Two starters that weren’t on the menu but which were showcased to us by the server were oysters and a terrine dish.  I actually really wanted to get the Terrine for myself but the Raw Beef was also something I wanted to try and won me over.

I absolutely loved the Terrine dish!  There were small clams on top of the pork terrine that made the dish so tasty, delicious, and perfect.  I loved it! 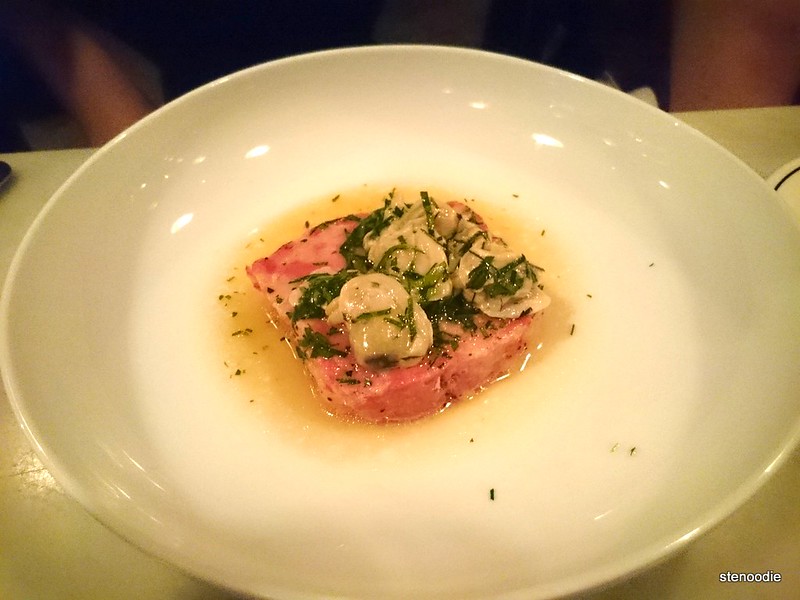 The raw oysters were in a syrup of yogurt and salmon roe.  This one was interesting because I’ve never had oyster in sweet yogurt sauce before.  This dish was just okay.  We did share this dish (it was so small). 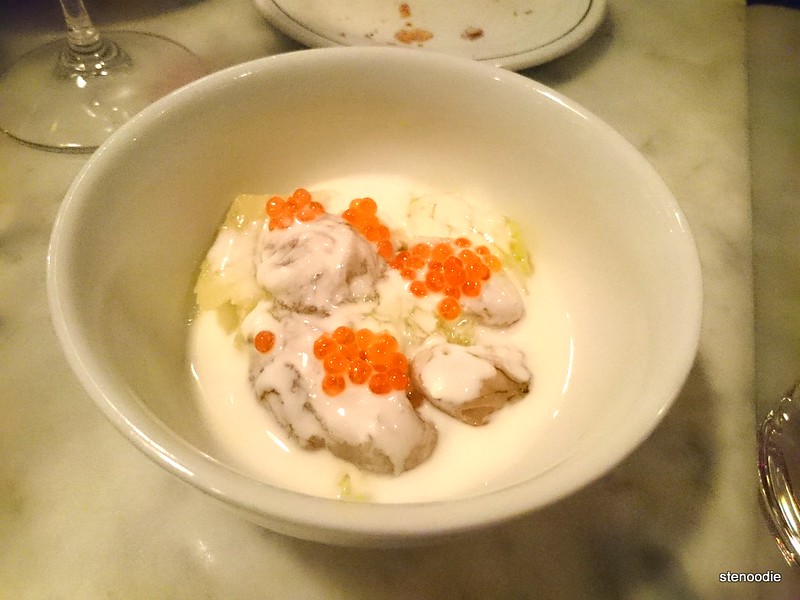 After the starters, our plates and utensils were cleared away and we were given fresh cutlery for our mains. 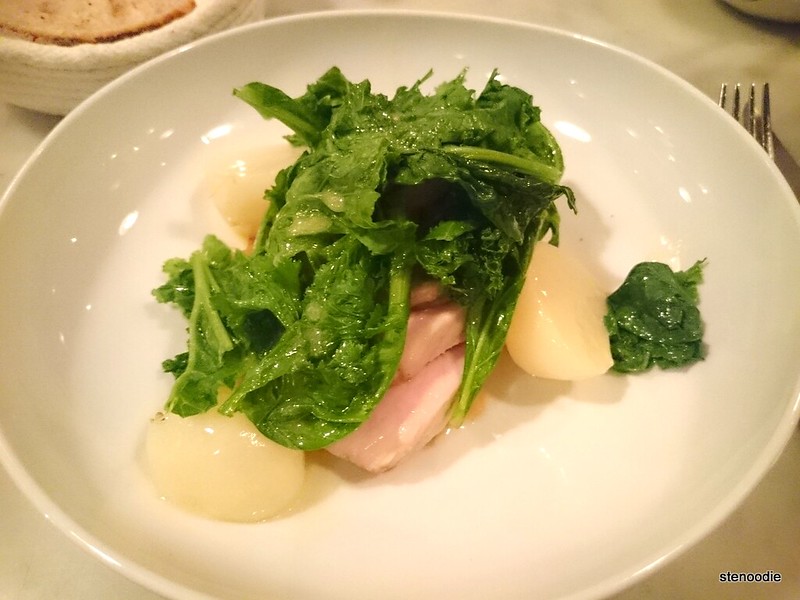 I ordered the “Roast Pork, Turnip, Mustard”.  It was a very clean dish.  Apparently, the chef’s specialty is to highlight vegetables in his cooking which is why the vegetables were quite a prominent feature in all the dishes (also something I read about the restaurant after the visit).

I was disappointed at this dish.  The roast pork were sliced into chunks and looked so well cooked.  Unfortunately, I found that it was a little flavourless and not exactly tender or overwhelmingly delicious.  The turnips were so soft and delicious though.  The mustard brought out a great flavour to the dish; in fact, the only flavour in the dish.  The greens were a little bitter and contained the salt component of the dish.  I just wasn’t a big fan of all the bland pork… sorry. 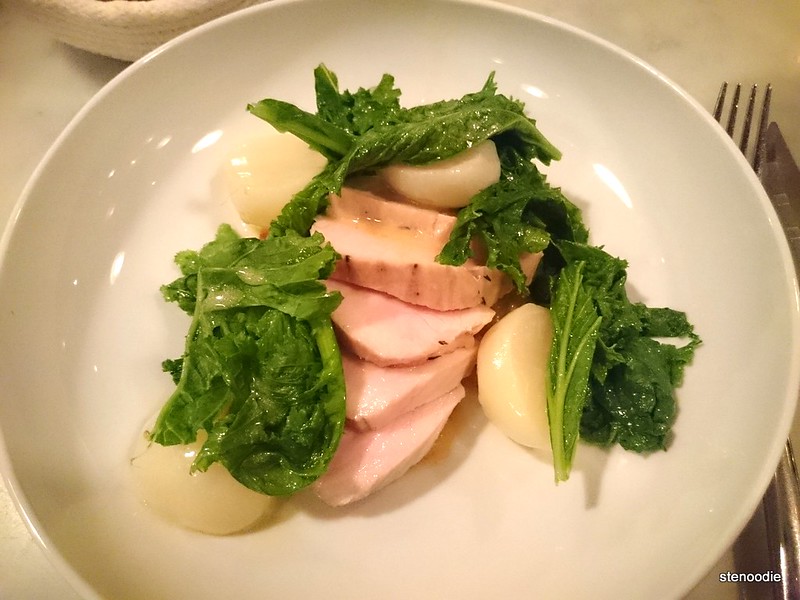 The dishes are so beautifully presented and beautiful in colour 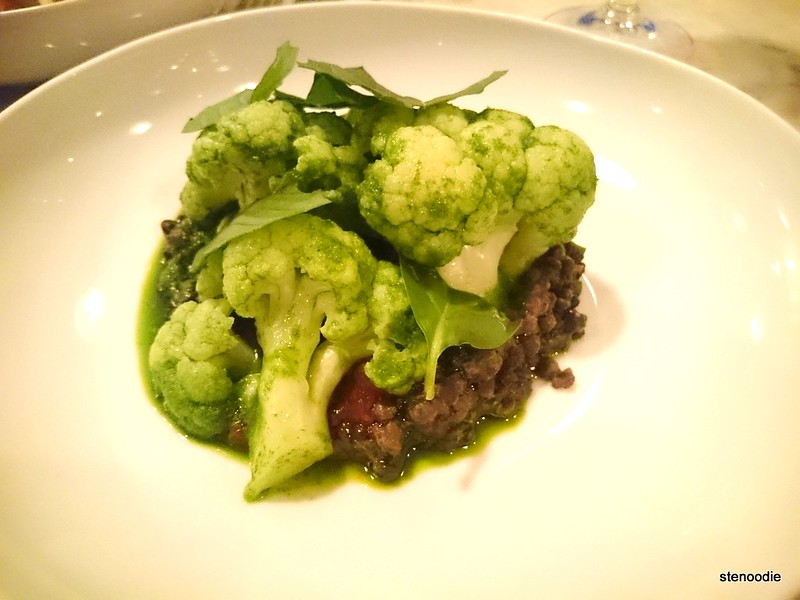 The “Lentils, Tomato Jam, Cauliflower” was a surprising hit.  The lentils were so infused with flavour that it almost tasted like meat (this was a vegetable dish).  The slight drizzling of tomato jam around the lentils and the soft cauliflower made for such a unique dish and subtle pop of flavour.  It was really a surprising vegan dish! 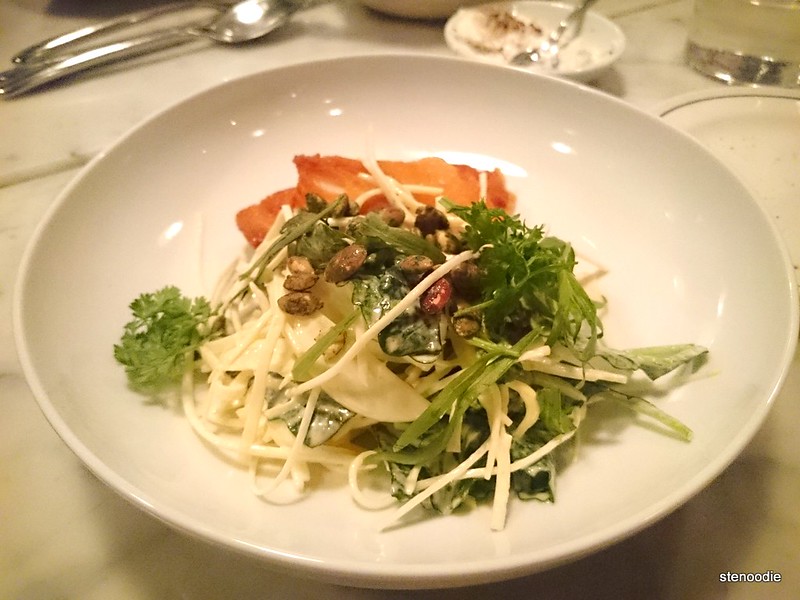 Wow, the black cod was amazing!  The “Black Cod, Celery, Tarragon” was really delicious.  I tried only a bit of the black cod and I was blown away with the flavour and softness and tenderness of the fish.  I right away wished I had chosen this main dish instead of the Roast Pork.  They truly did the black cod right here! 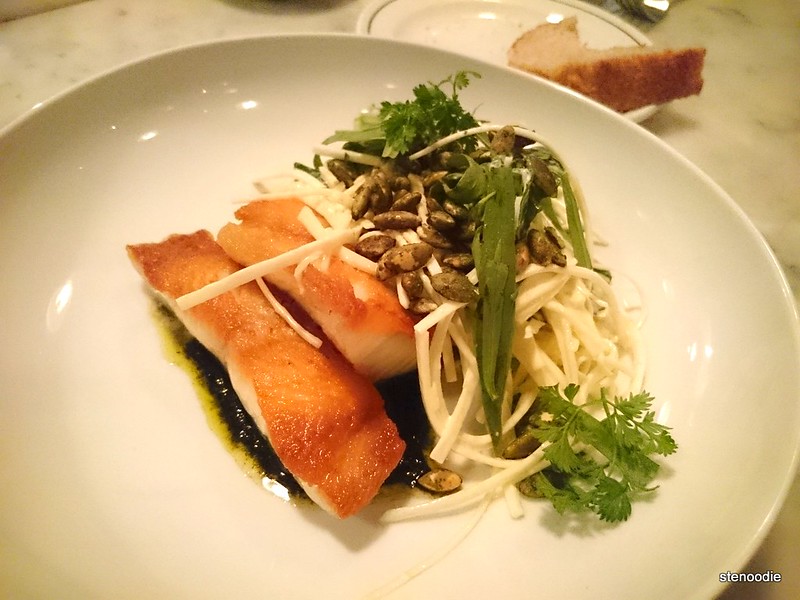 This cod was magnificent

After the main dishes were done, our plates and cutlery were again cleared away.  We decided on sharing two desserts for the entire table.  We chose the “Almond Cake, Peach, Cream”, and a Chocolate Brownie that they had on special that night.  I’m glad that we shared this because I couldn’t justify spending $11 more on my meal at Dandylion.

I watched the kitchen made the dessert.  The chef in charge was skilled and put everything together with such precision.  It was a pleasure to sit so close to the kitchen and get to watch the food being made. 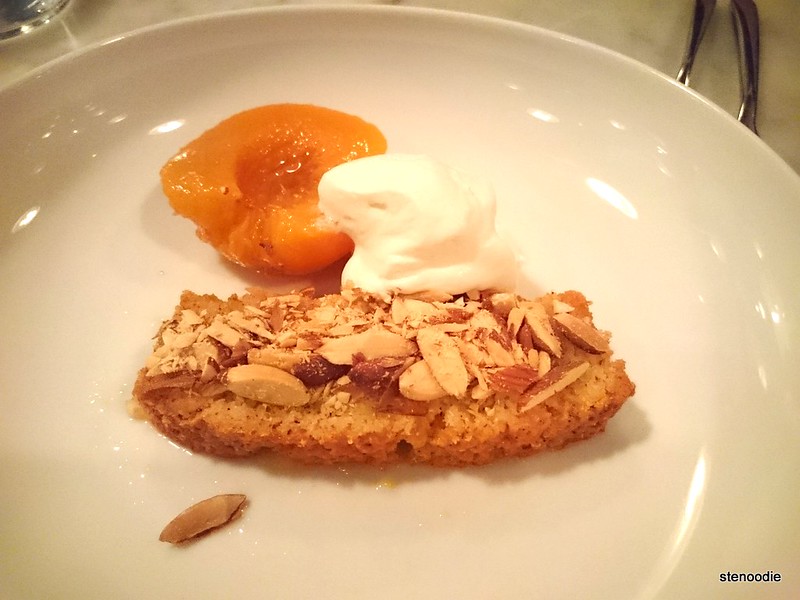 Wow, the “Almond Cake, Peach, Cream” was absolutely to die for!  It was a long narrow almond cake that only allowed us one bite each but the bite that I had of the almond cake blew me away.  It was such a unique blend of almonds and cake texture that it was perfect.  I never really like cakes that have a lot of nuts but this one was so different!  The fresh peach was a delight as well and a smooth texture to the dessert.  The cream was rich.  We all basked in the deliciousness of this Almond Cake dessert! 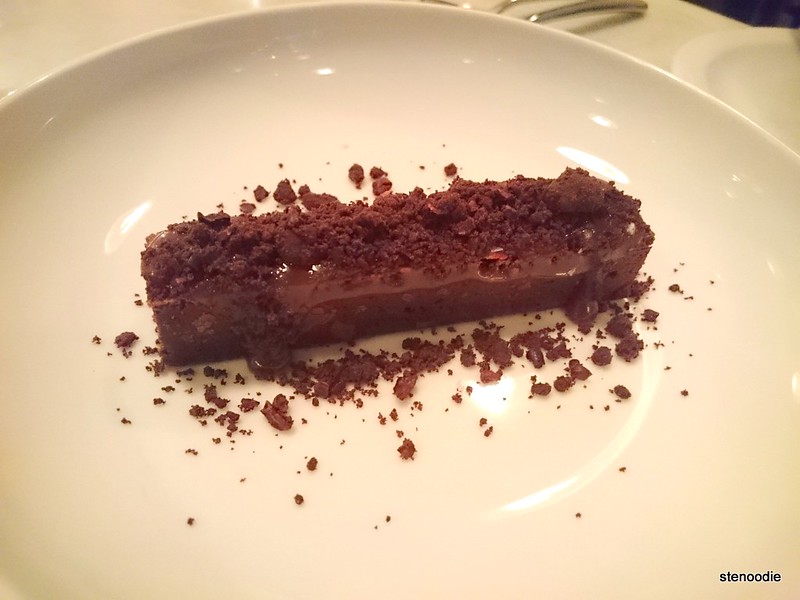 The Chocolate Brownie was also a long narrow and thin dessert that only allowed around one bite for each of us.  It was covered with crunchy chocolate bits.  This one also had a unique caramel or fudge-like texture within its components and also another taste that I couldn’t place my finger on.  It was unique but definitely didn’t compare with the amazing Almond Cake.

After that, all was done.  Time for the damage!  In total, I spent $59 (not including tip) that night on my starter, main course, and sharing two desserts with my dinner friends.  Including tips, the bill was quite large.  Considering what I ate and how I felt about most of the food, I wasn’t very impressed and thus felt a little ripped off for the food that I got.  I have spent this amount before at other restaurants but felt more satisfied due to the variety of food that I ate then.  I just didn’t enjoy that there wasn’t much variety to choose from on the menu and that the dishes were hits and misses.  This is all my opinion, of course.  I do have to say that the quality of the food were top notch and presentation was flawless. 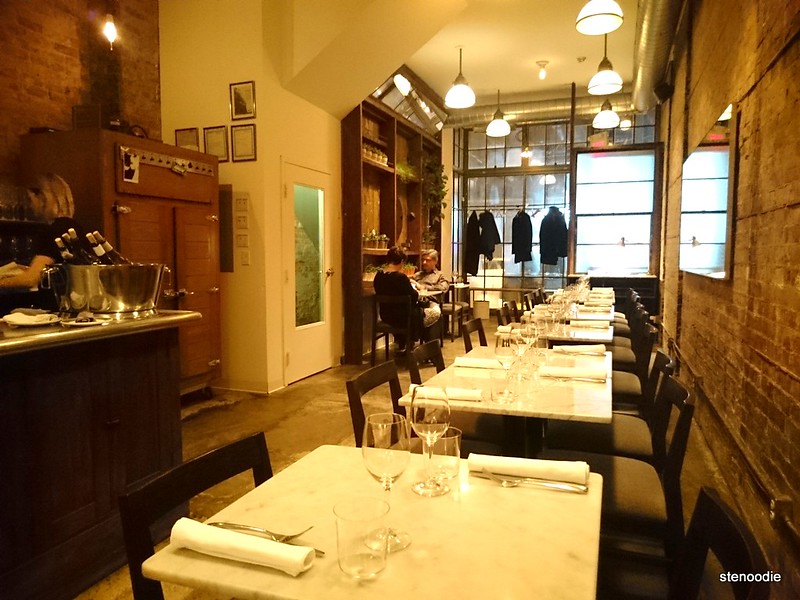 By the time we were eating dessert, the rest of the restaurant had cleared out and ready for the second seating

Dandylion is currently Canada’s top 6th restaurant in the country.  We all found that a little hard to believe.  Could it be that our menu choices for this week were not that great compared to other weeks?  Nevertheless, I was grateful that I had the opportunity to visit Dandylion to experience their food and their lovely restaurant (so chic).

Have you visited Dandylion before?  What was your experience like?

5 Responses to Vegetable-focused Dinner at Dandylion