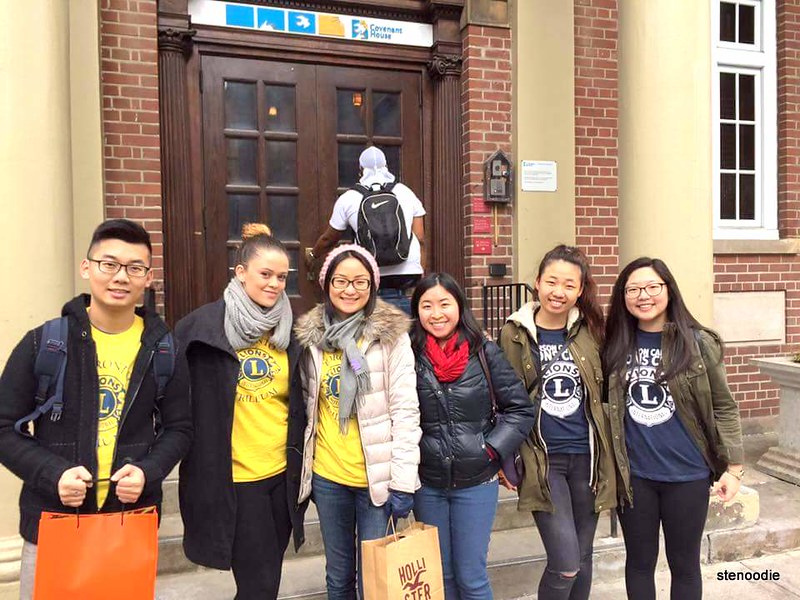 Sandwich Distribution with the Toronto Trillium Lions in Toronto on March 13, 2016

Volunteering!  I haven’t done it in a while and it sure feels good to be able to help another being out again! 🙂

This past weekend on a rather chilly Sunday in mid-March, I gathered together with the Toronto Trillium Lions Club to package together sandwiches to give out to the homeless (needy) in downtown Toronto.

We met up at 10 a.m. at Christina’s condo near Yonge and Bloor to do the sandwich and paper bag assembly (thank you Christina for lending us your space!).  Thanks to some generous donors and the Toronto Trillium Lions Club (a non-for-profit community group that is involved in charity work in the Toronto region), we were able to get four loaves of bread, four packs of sliced chicken and ham, mayonnaise, brown paper bags, parchment paper, juice boxes, and lots of individually packed cookies to put together and distribute to those in need. 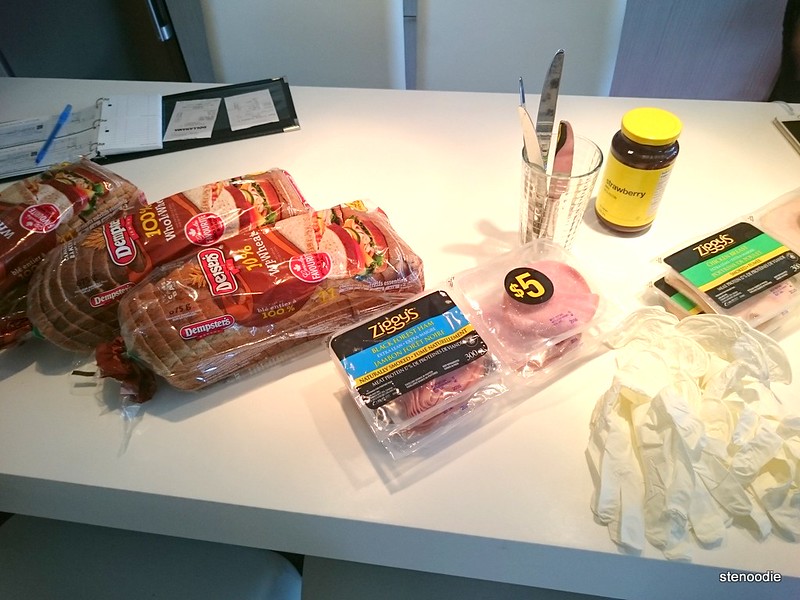 Our materials including gloves for the food handlers 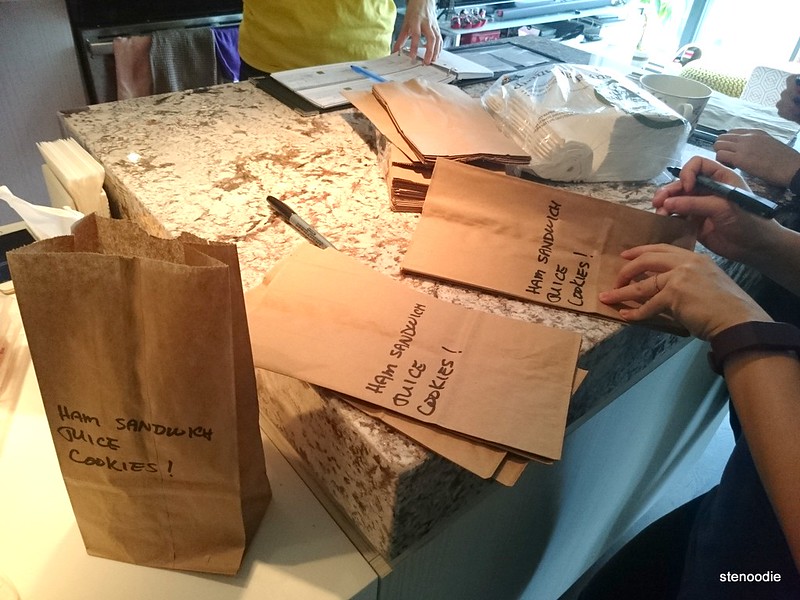 I love doing things like this because it’s easy, fun, and you really do get to help out those who are in need.  I say that it’s easy to do because the tasks themselves are absent-minded ones; we created a small assembly line where the paper bags were first marked off with what was going to be contained inside (I have to admit that we did an awfully thorough job at this and wrote out each item that were going to be in each bag whereas most people would just write “C” for “chicken sandwich” or “H” for “ham sandwich”), then two people would spread the mayonnaise onto the bread, two people would put in the ham or chicken slices, one person would wrap the sandwich up in the parchment paper, and then two more people would put them into the appropriately marked paper bag with the juice box and cookies. 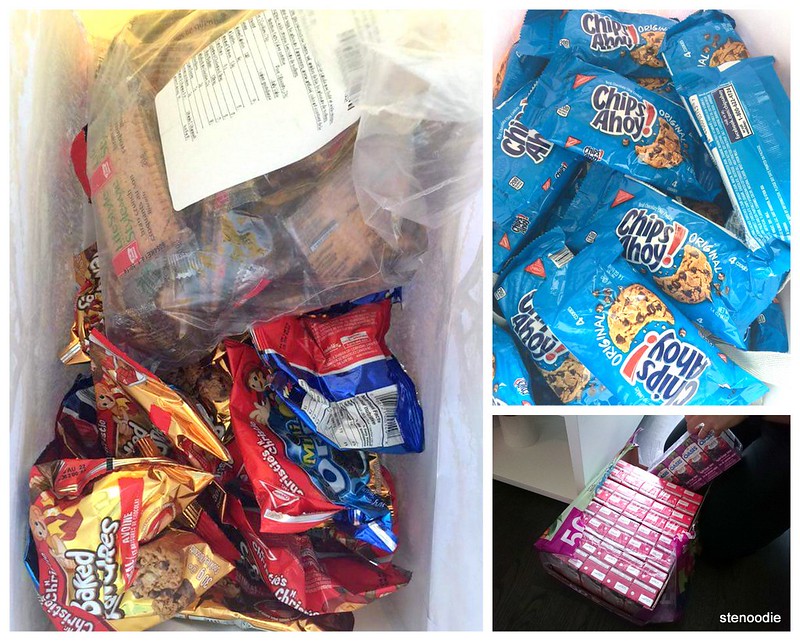 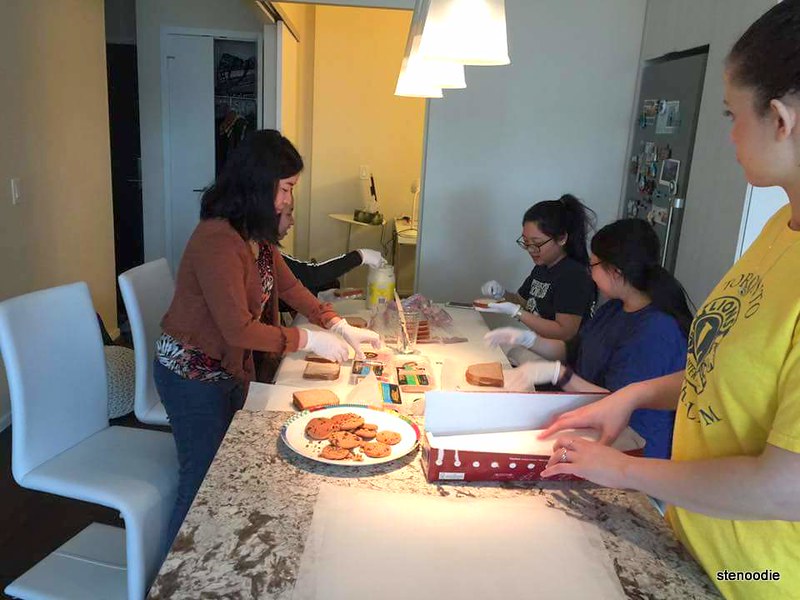 Making the sandwiches — in action 😉

This was a lot of fun and because we had a lot of people working together, we accomplished everything very, very quickly!  We actually ran out of bread and had a lot of cold cuts left over so one of us was able to run to the local grocery store to buy one more loaf of bread.  Even then, we still had some extra juice boxes and cookies left over.  Christina was sweet enough to buy us some apple turnovers for breakfast ealier too but since we had a lot left over, we put those into ziplock bags too to distribute. 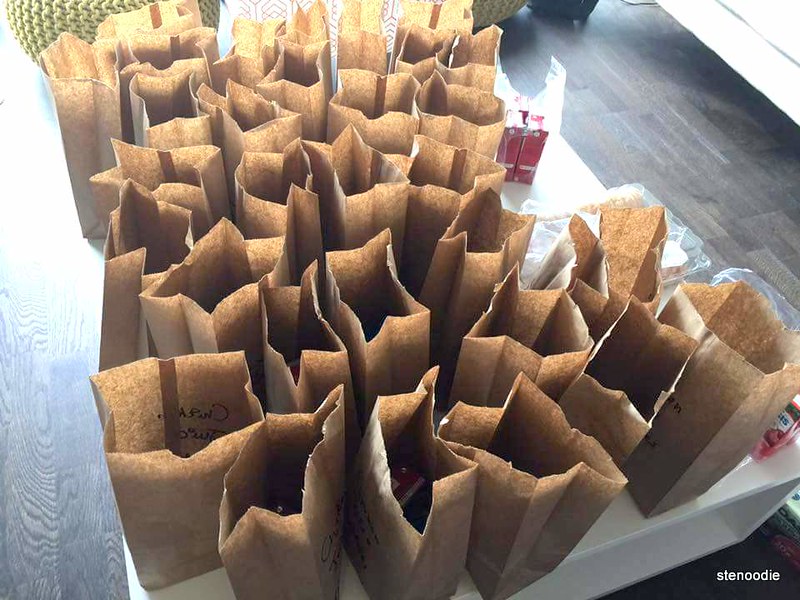 What a great picture!

After an hour and a half and close to noon, we set off into the streets of Toronto to find the homeless to distribute our packages to. 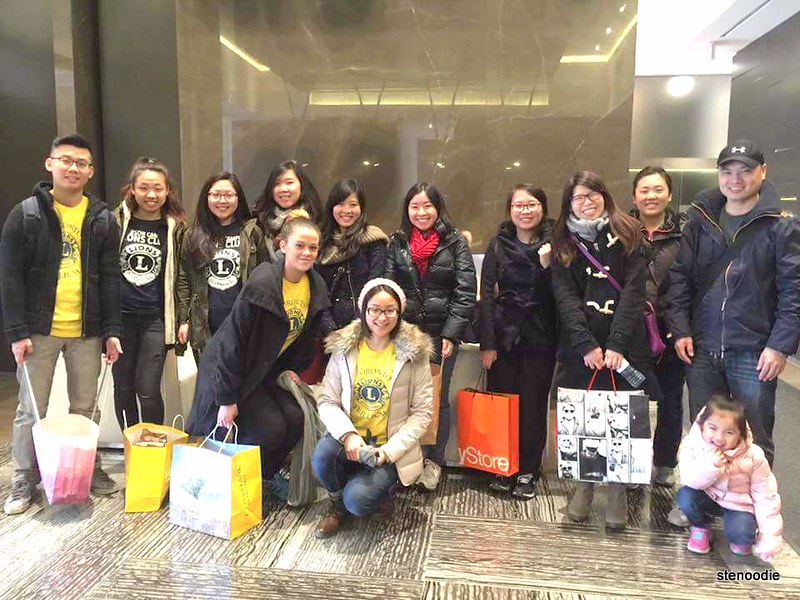 Group photo before we headed off

It just so happened that the Sunday marked the St. Patrick’s Day Parade in downtown Toronto so instead of heading down Yonge Street as was originally planned, we made a detour and headed south on Church Street instead.

Our first couple of attempts to distribute our packaged goods didn’t work out as some of the visibly homeless people didn’t want to accept our offers.  Very quickly, we learned that this was going to be harder than we thought and that it was difficult to physically find the needy people as well.  (Please forgive me for lack of a better term when using the words “homeless” and “needy” to describe these individuals.) 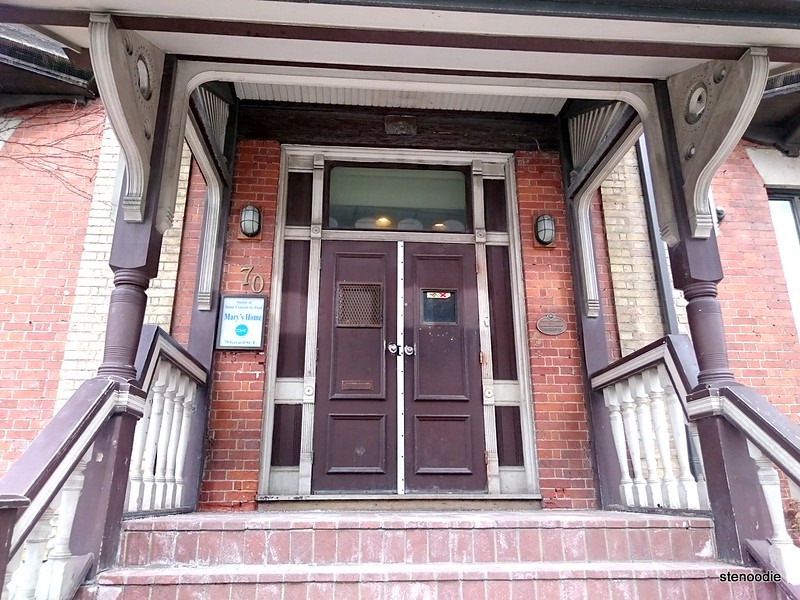 Thus, we passed by Society of St Vincent de Paul, Mary’s Home, a women’s shelter, and distributed two bags for them to take in to re-distribute to their patrons.  Next, we passed by the Covenant House and gave them four bags.  They were grateful and offered us volunteering opportunities too for their weekday lunches and dinners.  We were left with ten brown bags and hoped to distribute these by hand to the needy individuals we wanted to originally distribute these to. 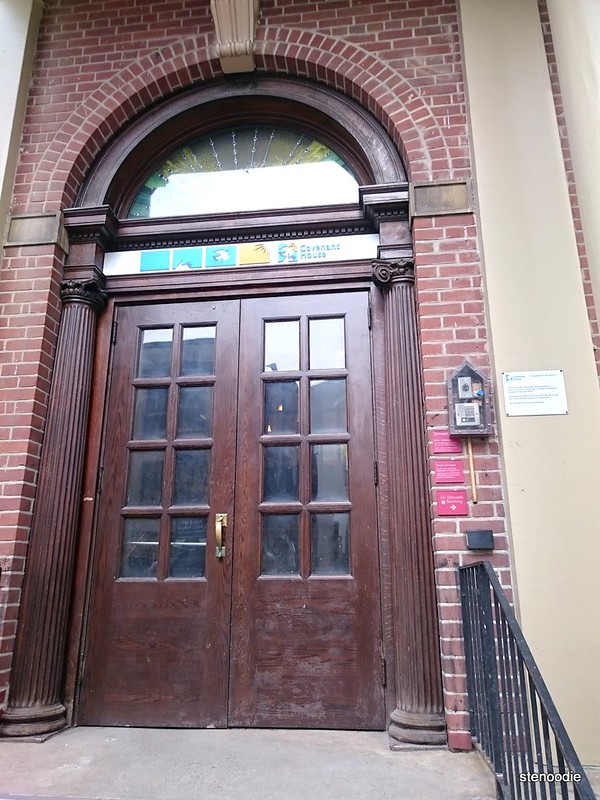 In the end, by 1:30 p.m., we had distributed all but one last brown bag (success!) and met up with the rest of the members for lunch at Kinton Ramen 5.  After lunch, as we were walking back up on Church Street, we did encounter an individual who was sleeping in a sleeping bag on the street and we gladly gave our last paper bag to him.

All in all, this was a very gratifying and humanizing experience.  I learned a lot even though we didn’t encounter many homeless/needy individuals.  I learned that no matter your life situation, how much money you have, or what you do not have, the single most importance thing anyone needs to have is dignity.  Even though some of the individuals whom we approached were visibly unclean, under dressed, and looked needy, they didn’t want to openly accept our gifts.  We did not know what mental or emotional state they were in, but one mistake I think we make is that we assume that these individuals need or want help.  In order to help them, they first need to accept that help.  They don’t want to be looked down at or pitied.  I think that they still deserve dignity and respect even though they are not in a good situation and do not appear to be so. 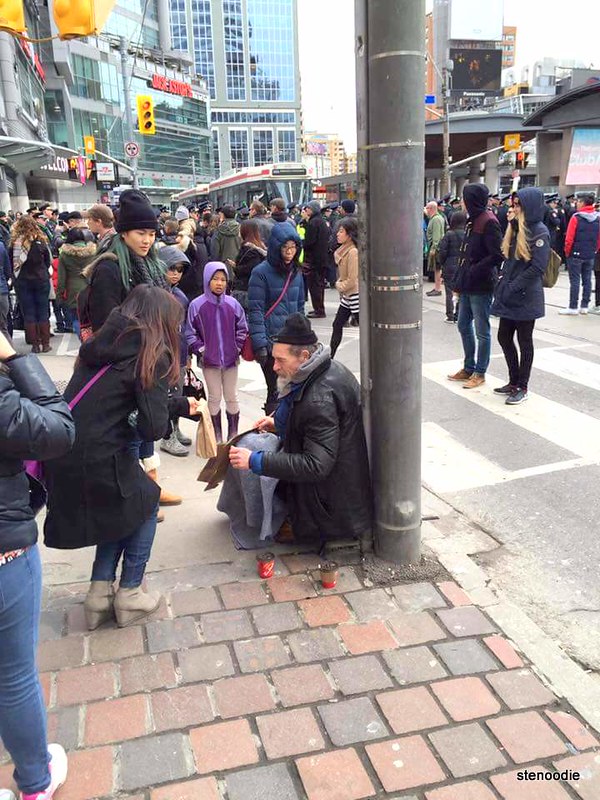 One of the only pictures we took of us distributing the sandwiches…. we avoided taking pictures because I think it is not right to be taking photos of the distribution as if these people were spectacles…

I think for next time, whenever we approach one of these individuals, we need to first make sure that we are not in a big group so that they do not feel intimidated (four people is probably ideal).  If we are holding a big bag of the sandwiches, we should hold one of the brown bags in our hands and offer it to the someone as a sign of respect or gift with body language that shows openness and kindness.

If someone were just to hold in one hand the bag of sandwiches and nothing else in the other hand and gestured to the bag and said something like offhandedly like, “Hey, I have some sandwiches.  Do you want them?”, the individual might not want to accept it.  On the other hand, if we were to bring the sandwich out in our hand already and offer it openly, then they would be more likely to accept.  In addition, what we did for one individual who refused our gift was to leave the bag nearby and then let them take it after we had left the area.  I believe this gives them more choice and dignity.

A couple of the individuals that we encountered who were sitting on the street and openly asking for change or food did gladly accept our paper bag goods.  They were very grateful and open towards it.

I am so new at this type of humanitarian work that we did that I am just reflecting on our experience.  Have you done this before?  Have you made sandwiches and given them to someone needy on the street before?  Do you have any tips or insight on how to make the experience better for these individuals?   I truly believe that everyone, no matter their life situation, needs and should be given respect and dignity.  They are still a living and breathing human no matter what!  I’d really appreciate your insight and comments. 🙂

I'm a stenographer, foodie, avid traveller, and new mom who loves to share her experiences with the world.
View all posts by stenoodie →
This entry was posted in New Experiences, Philanthropy and tagged @trilliumlions, charity, distributing sandwiches to the homeless, homeless in Toronto, homeless shelters, how to give out sandwiches to the needy, how to help the homeless in Toronto, Philanthropy, sandwich making, sandwich run for the homeless, sandwiches for the needy, Toronto, Toronto Trillium Lions, Toronto Trillium Lions Sandwich Package to the Homeless, volunteerism. Bookmark the permalink.

5 Responses to Toronto Trillium Lions Sandwich Package to the Homeless