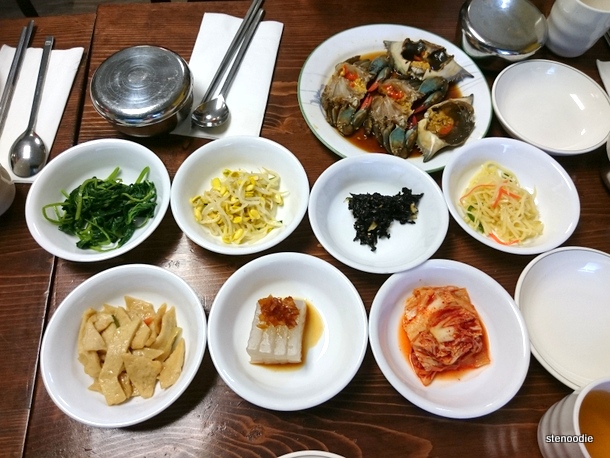 After our dinner some time ago at Hot Pot on Yonge, we mentioned that we should try Korean raw crabs next time.  Thus, when we decided to get together for a mini Trip to China reunion/dinner get-together recently, we went to Jung Soo Nae for a Korean meal and to try out these raw crabs!

Jung Soo Nae is located on Yonge Street near Finch Avenue; it is about 3 minutes walking from the Finch Subway station.  It’s a Korean restaurant that looked family owned.  It was very modest inside and devoid of much decor.  However, the homey feeling and casual atmosphere really made it a great place to dine at for authentic and traditional Korean food.

We ordered two plates of the raw crabs called GanJang GeJang which were marinated in ‘Jong Soo Nae’s special, unique soy sauce’.  I was very excited to try these as I had never had Korean raw crabs before!

Since we were a sizable group, we also ordered two orders of sliced pork belly that would be cooked on the table, seafood pancake, and a kimchi stew.

The restaurant was packed with people and I’m so glad that Wendy was able to make a reservation for our large group.  Throughout the night, the owners of the restaurant were seen glancing at our table often because he wanted us out of the restaurant so that the people waiting outside could get a table.  Eventually, we did leave after an hour and a half of dining.

Cooking the sliced pork belly at our table! 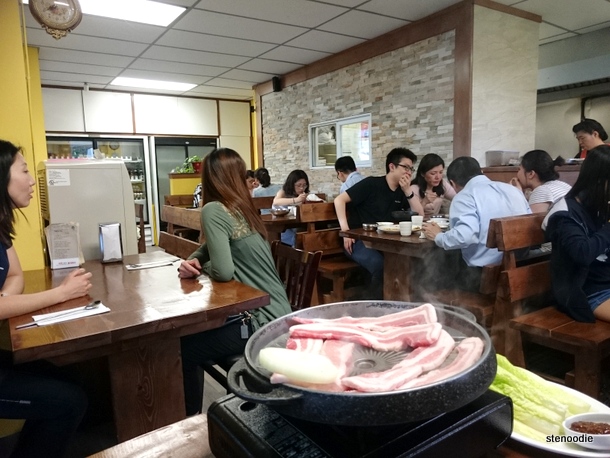 Small restaurant so be sure to make a reservation or be prepared to wait!

One side of the table was cleared so that the cooking stove could be placed for the cooking of the sliced pork belly.  The female staff (I think it was the owner’s wife) was the one who cooked the pork belly for us.  She placed the large slices of pork belly on the stove, spread them out, left them on to cook for a bit, before returning to flip them over and then to cut them up for us.  It smelled delicious! 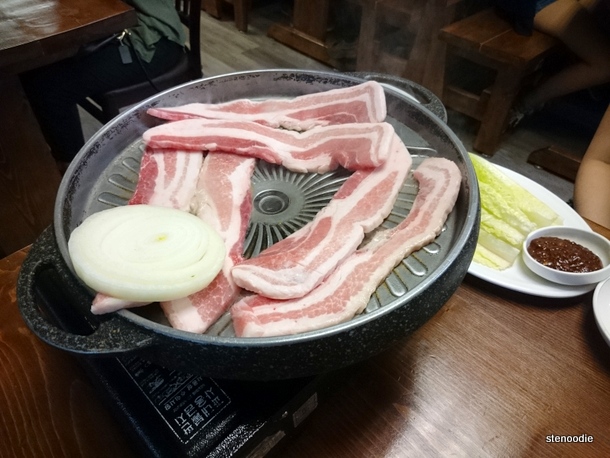 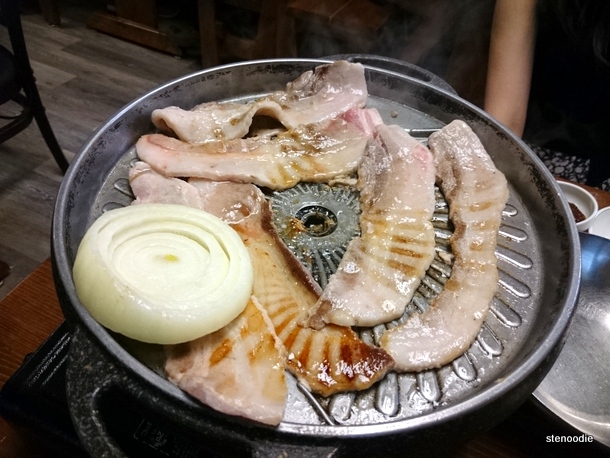 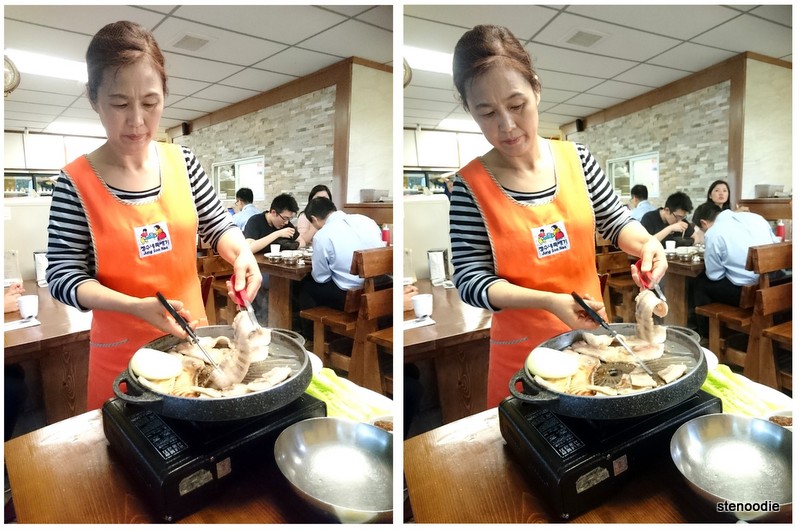 Coming back to cut it up for us after cooked 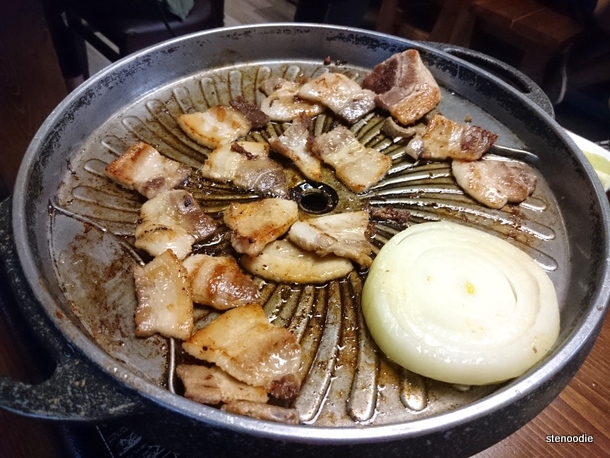 The GanJang GeJang raw crabs arrived in two plates and split open to reveal the guts inside each small blue crab.  It looked mighty fresh.  Gen was a big fan of the special soy sauce blend and taught us to eat it by taking some of the rice and putting it into the shell of the crab in order to use up the soy sauce blend.  The soy sauce was actually really delicious!  The best part was mixing the fat of the carb, called tomalley, into the rice with the sauce! 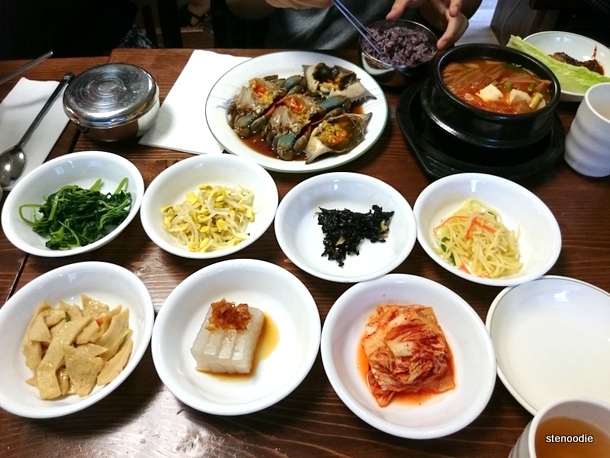 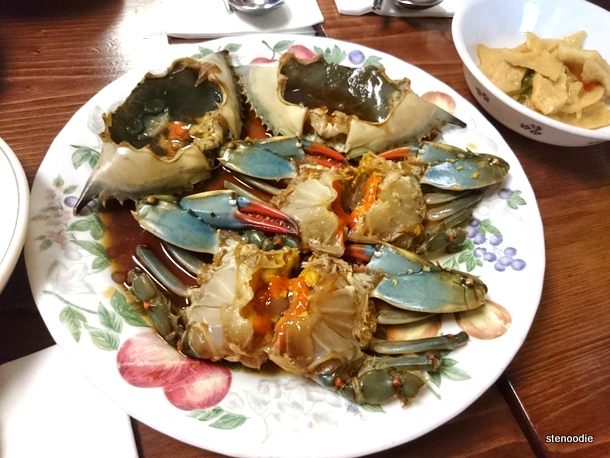 The difference between cooked crabs and raw crabs is that the meat in the raw crab was very gooey, with its texture and consistency similar to that of egg yolk.  It was chilled and very gooey.  You cannot distinguish any ‘meat’ inside at all.  It also took a bit of time to chew through the shell and legs of the crab in order to eat it.  However, it was a very unique and satisfying experience!  The rice really went well with the soy sauce blend as well. 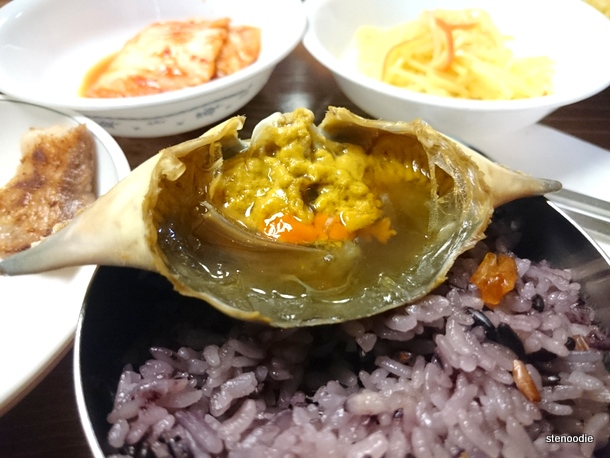 Look at all that goo!

The sliced pork belly was great, especially when wrapped up with the fresh Napa cabbage, raw shallots, and bean sauce.  I do think it was a little bit on the dry side though. 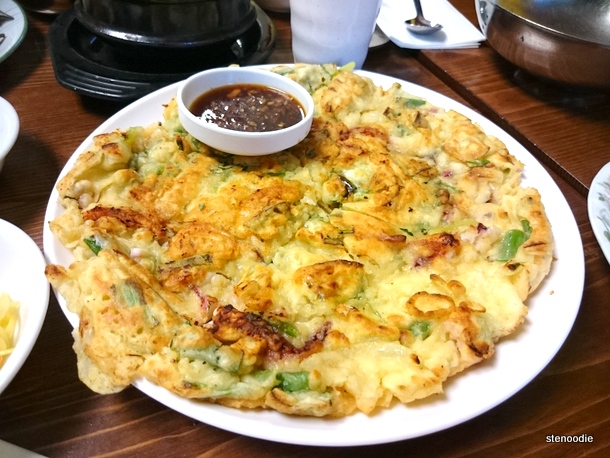 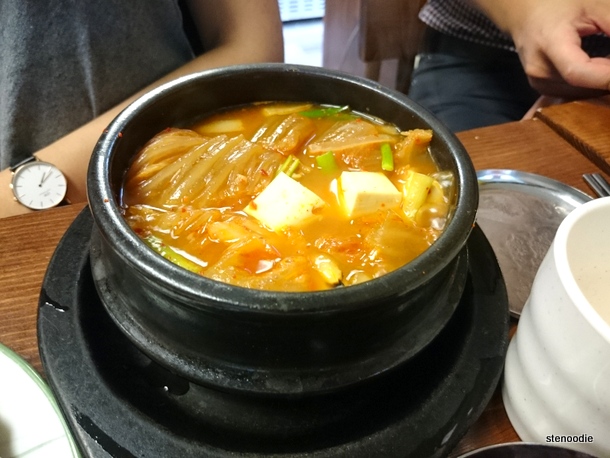 MookEunJi SamGyeop JeonGol. $30.99 (for 2 people)
-kimchi (fermented for more than a year), tofu, and sliced pork stew served in a casserole

The kimchi stew contained tofu and pork.  What was special about this kimchi stew was that the menu said that the kimchi was fermented for more than a year!  I think we all were able to taste this since the kimchi was especially spicier than most kimchi.  The flavour really was thorough and deep within the cabbage.  It was a really tasty stew. 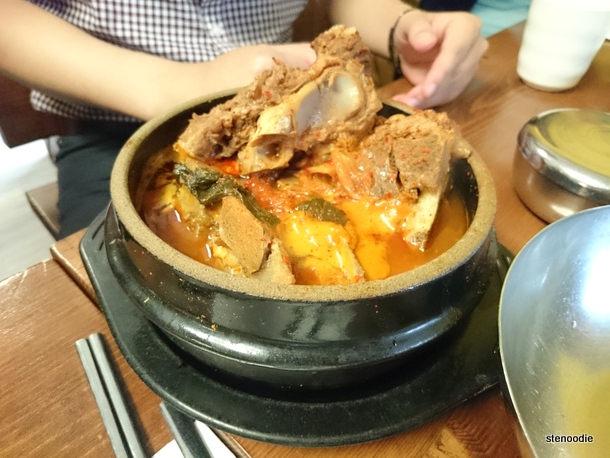 We were all very full and satisfied after that meal and left quickly much to the pleasure of the restaurant owner.  We really did only dine in the restaurant for an hour and a half but it seemed like he was really angry that we were staying so long to eat.  Nevertheless, the service was polite and he waved good-bye to us as we left.  He even thought we were having a birthday party. 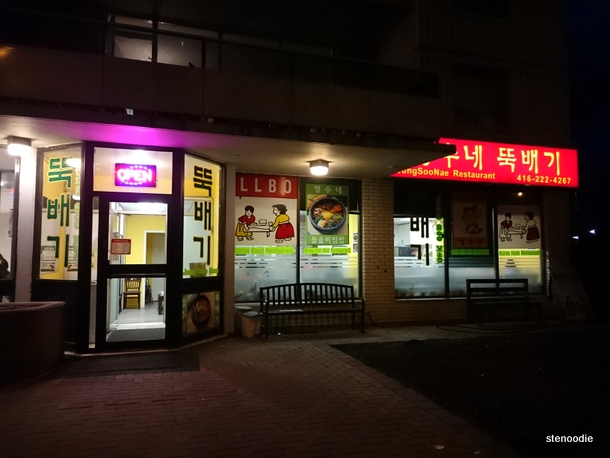 I highly recommend going to Jung Soo Nae to try some Korean raw crabs if you haven’t tried it before.  Be sure to share the dish with others as it will be too much if you were to eat it by yourself — unless you are a huge fan of crabs and raw crabs.  I would love to come again to the future to try their other variation of the raw crab, the spicy one, and also any of their other seafood dishes.  I spotted some of the other tables’ dishes and their food looked so good too! 🙂

(Also, they have free parking in the back of their restaurant.  Since Jung Soo Nae is situated at the ground level of an apartment building, go through their gate and then park at the back where there are signs showing reserved spots for restaurant guests.)