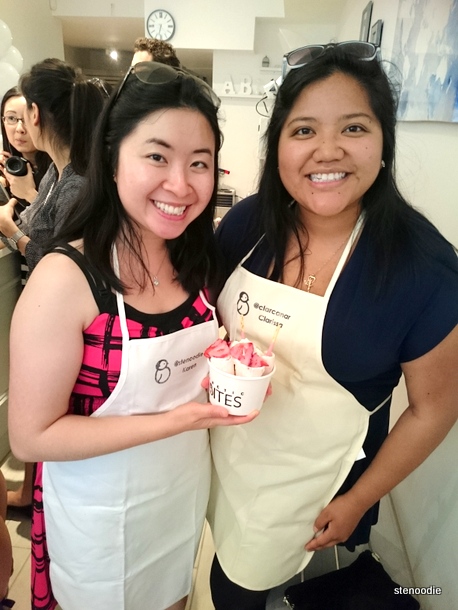 Thanks to Patrick of @feedmyphone, my fellow foodie friends and I were able to try out Toronto’s very first Thai-inspired ice cream rolls at Arctic Bites.  At the time of writing, they were not officially open to the public yet, but their soft launch to the public was on May 31 from 3-10 p.m. (this blog was published on May 31 at 8:30 p.m.) so by the time you read this, they will already be open to the public for everyone to enjoy!

The first time I encountered Thai-inspired ice cream rolls was actually last month when I was in Paris, France.  On the second day in Paris, we happened to be in Galeries Lafayette where they were hosting a big “Summer Break” party and there were various stands and stalls inside the mall where guests were offered lots of freebies and treats to kick off the summer.  One of these stands was actually where two gentleman were making ice cream rolls for us!  I was intrigued by the way the cream froze on the ‘skillet’ and then rolled up and fitted with fruits and nuts to be eaten as a dessert.  Thus, as you may have read in that blog post, I spent up to 30 minutes waiting in line for that dessert.  Who would have known that I’d be enjoying this very same dessert in my home city of Toronto just a month later? 😀 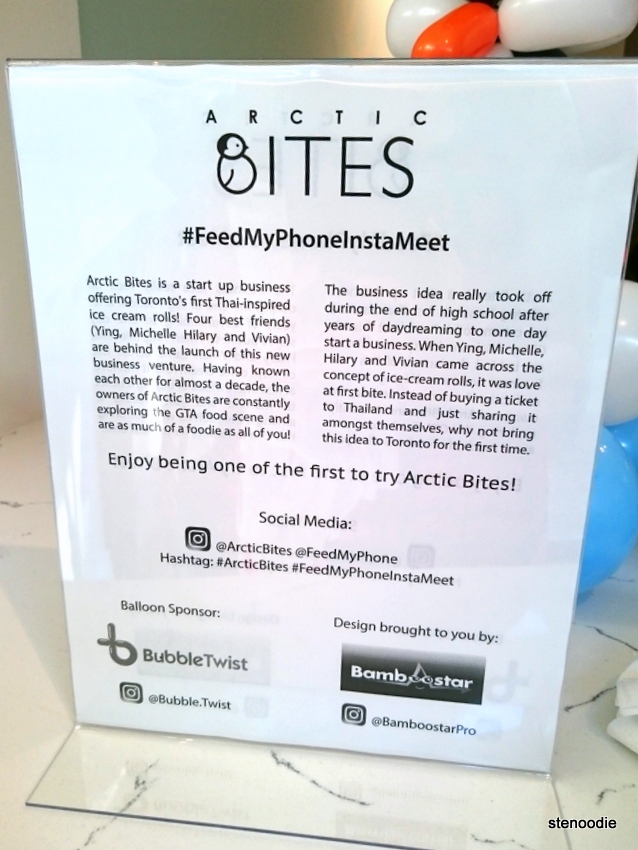 #FeedMyPhoneInstaMeet and a little introduction behind Arctic Bites

These ice cream rolls are referred to as “Polarolls” by the three ladies who founded Arctic Bites.  Ying, Michelle, Hilary, and Vivian are childhood best friends who decided to start up their own business after seeing these ice cream rolls on social media and wanting to try (clearly they are foodies just like you and I!).  Instead of buying a ticket to Thailand where these ice cream rolls originate (I actually didn’t even know that was where they originated), they decided to bring it straight to Toronto and start their business with it as well. 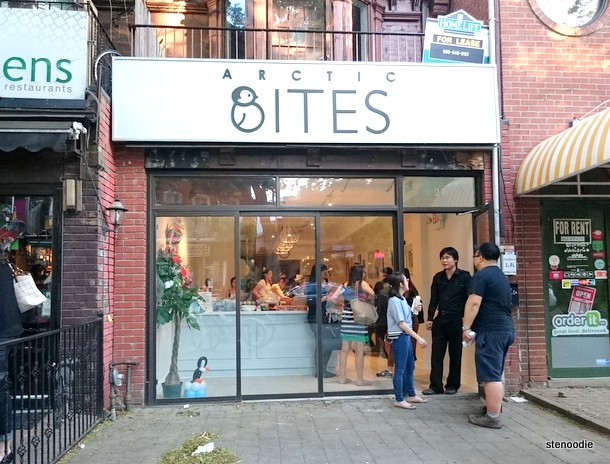 Arctic Bites replaces the previous Sambuca Grill restaurant on Baldwin Street (I actually dined at Sambuca about two years ago — blogged here), a street that is popular with many great restaurants already.  The four ladies knew that they wanted to have a name that would refer to something cold, so the name ‘Arctic Bites’ came somewhat naturally.  (They also might be including other frozen treats in their line-up in the future, so the word ‘bites’ was definitely a good fit to their new dessert shop.) 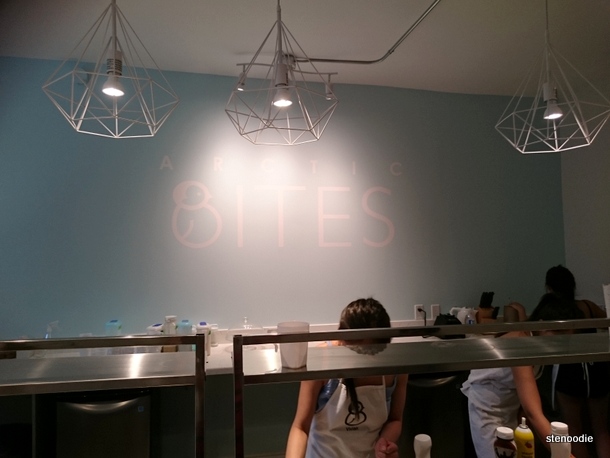 Light blue behind the logo and look at those cages around the lights that are like upside down diamonds (icicles anyone?) 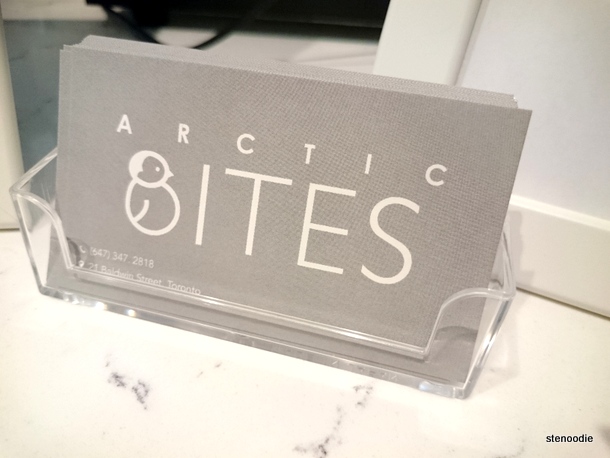 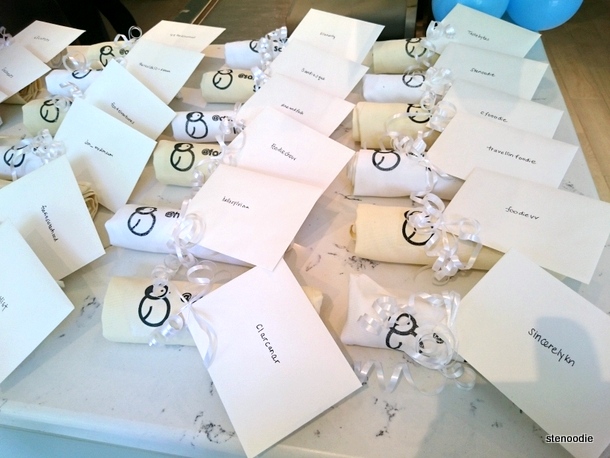 Custom-made aprons and thank you cards for all the guests! Super cute 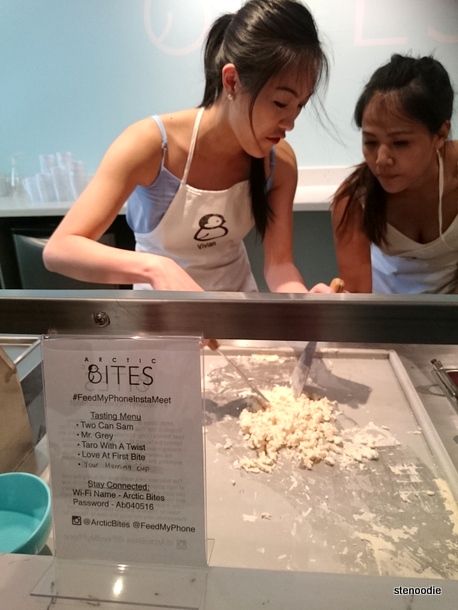 Ladies perfecting the ice cream rolls at the #FeedMyPhoneInstameet

The #FeedMyPhoneInstameet was scheduled from 5:30 to 7:30 p.m. on May 30 as a drop-in basis — the absolute best day to have an ice cream tasting as it was 27 degrees outside, the sun was shining, and almost everyone who didn’t have to be in work clothes were in shorts, skirts, and dresses.  It was a great day for ice cream!

The inside of Arctic Bites was very clean, modern, and cute.  Their logo was fitted with a penguin so naturally they had balloons fitted into an adorable penguin and even Olaf from the movie ‘Frozen’.  The theme was a light blue and white colour, which definitely fit in with the ‘arctic’ and colder tones. 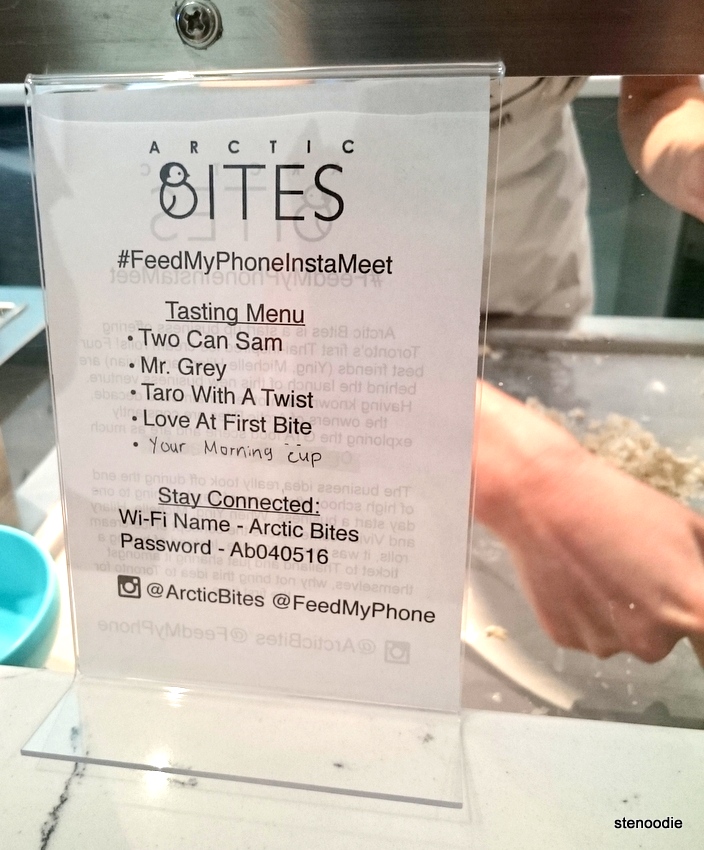 #FeedMyPhoneInstameet details. The wifi login was a God-send!

We were welcomed into the new unit by Patrick and then invited to order our first ice cream roll.  There were five flavours at the time of writing and each of them were narrowed down from the numerous ideas that the three ladies had when they began dreaming of this project.  The five flavours included “Two Can Sam”, “Mr. Grey”, “Taro with a Twist”, “Love at First Bite”, and “Your Morning Cup”.  Very adorable names! 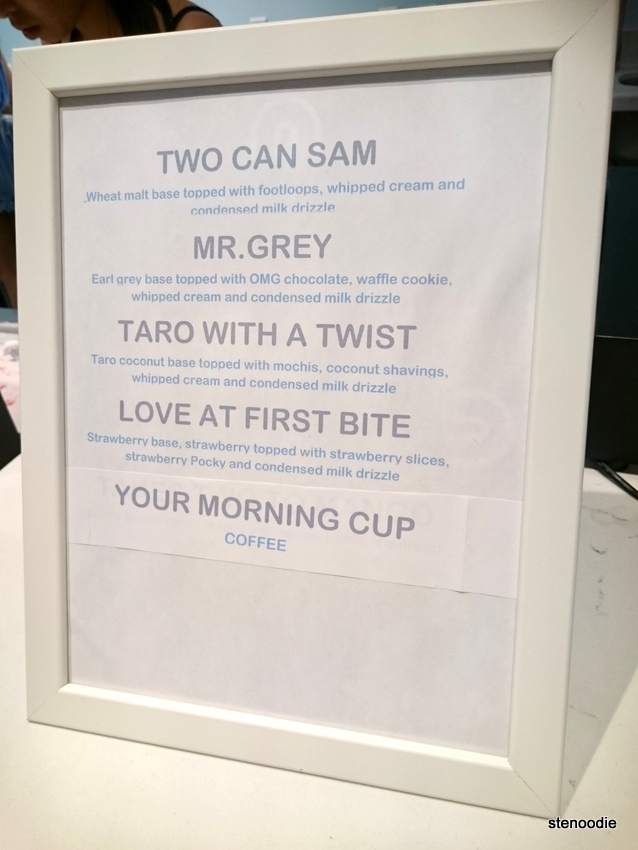 Arctic Bites ice cream rolls menu at the time of posting (May 31, 2016). They plan to have a mango flavour soon too!

The ladies were working behind the counter and rolling up the ice cream. 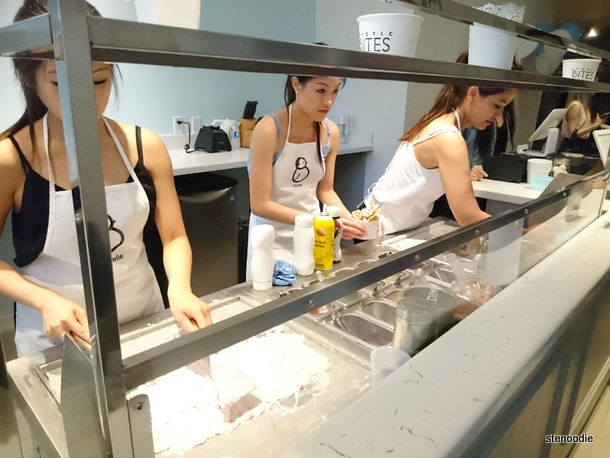 How to make ice cream rolls: 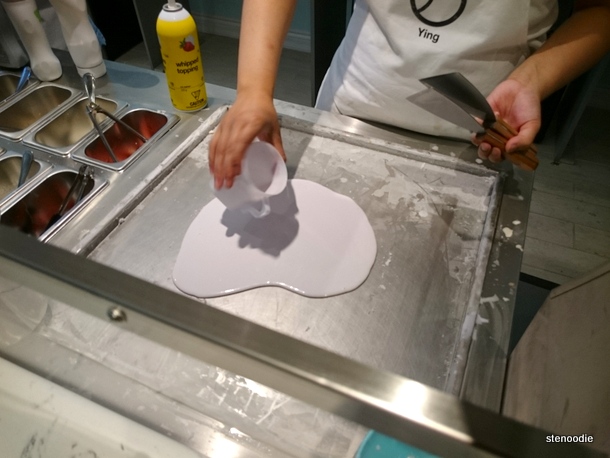 1.  Pour the ice cream base on to the cold plate that reaches up to -20 degrees 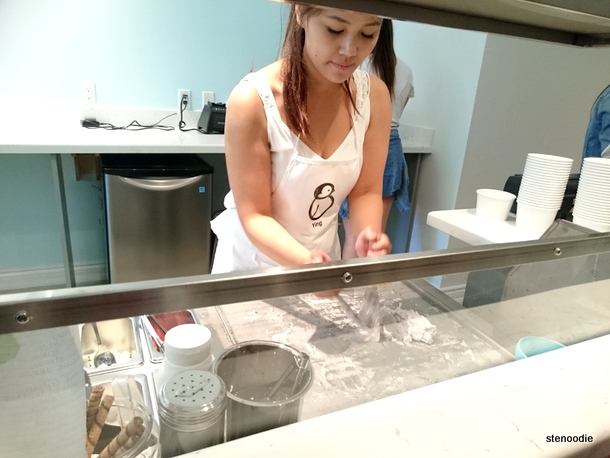 2. Use a scraper to mash up the ice cream base with any ingredients you want to be added (coconut shavings, strawberry, etc.) 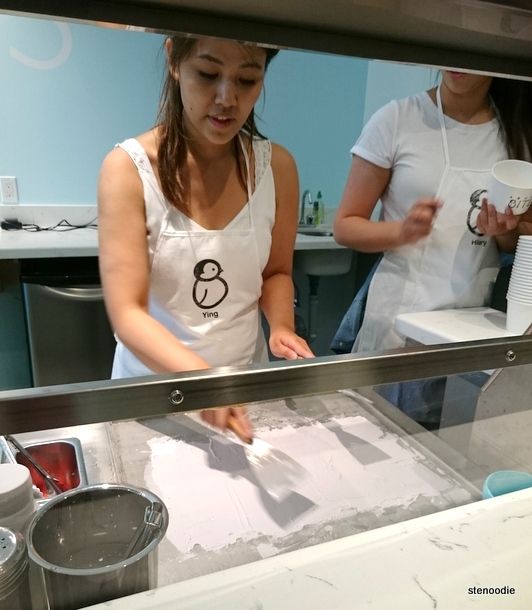 3. Use the scraper to flatten out the ice cream base and smooth it out so that it freezes against the cold plate 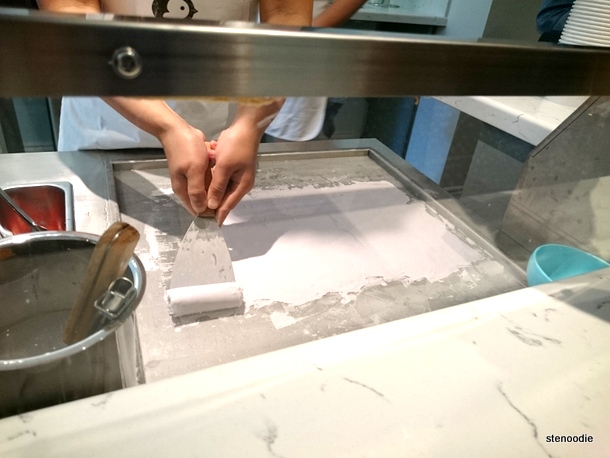 4. Once the ice cream base has frozen, push the scraper against the cold plate to make the rolls 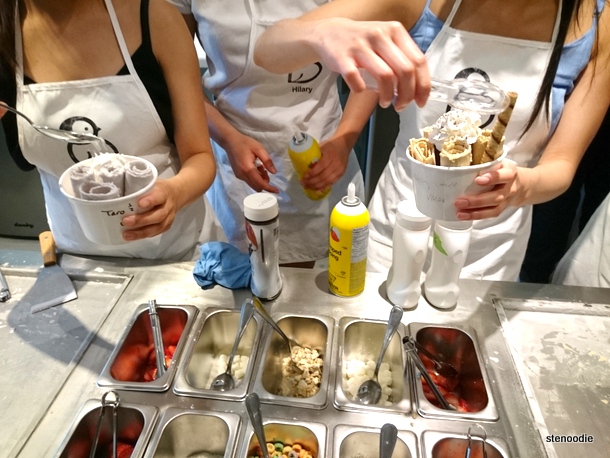 5. Add toppings such as whipped cream, strawberry, mochi, and anything else on to the rolls in a cup 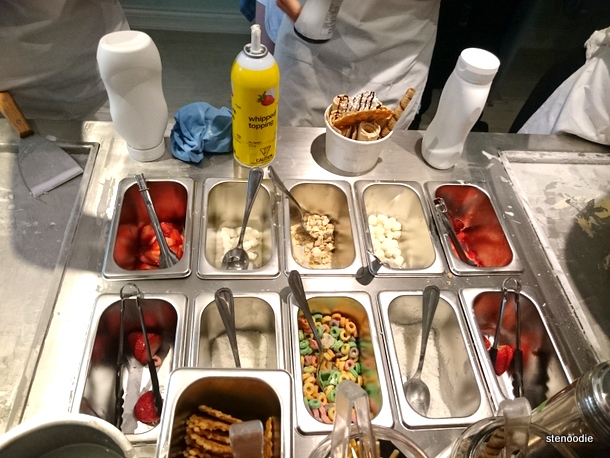 A lot of fresh toppings available!

Since this type of dessert was actually not new to me, I wasn’t as impressed as I was last month when I saw it for the first time.  However, for most of everybody at the event, it was definitely their first time seeing and tasting a dessert so unique!  Despite it all though, I really enjoyed watching these being made.  It was mesmerizing.

I took many pictures and videos to immortalize the event as always. 🙂  As I was taking these photos and watching them make the ice cream rolls, I had a really good time asking the ladies questions about Arctic Bites and how they started.  They were so friendly and easy to talk to. 🙂

I ordered the “Mr. Grey” flavour to start.  It was an Earl Grey base topped with OMG chocolate, waffle cookie, whipped cream, and condensed milk drizzle.

Clarissa ordered the “Taro with a Twist” which had a taro coconut base topped with mochis, coconut shavings, whipped cream, and condensed milk drizzle. 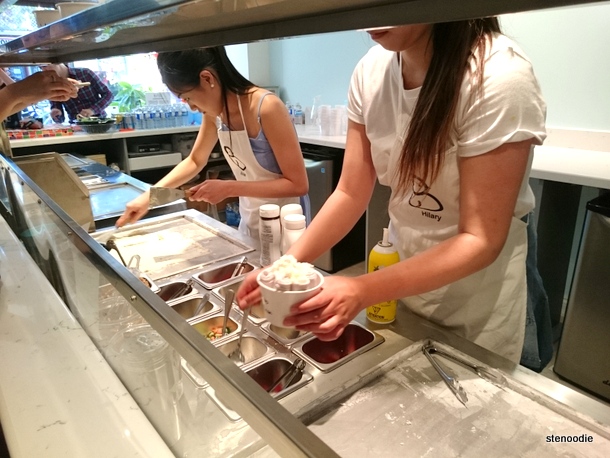 The girls working hard to serve us! :0) 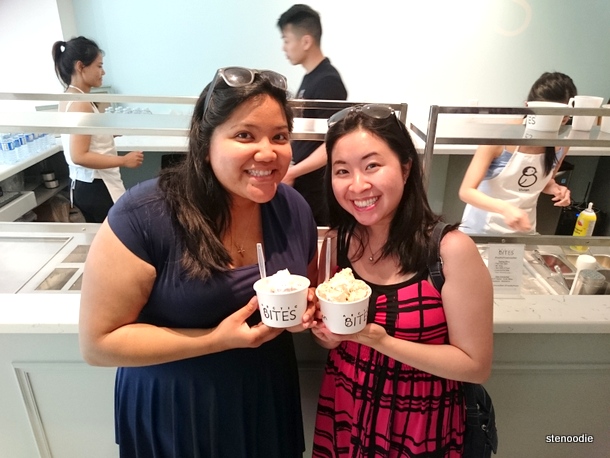 So excited! We got our first cup of ice cream rolls! 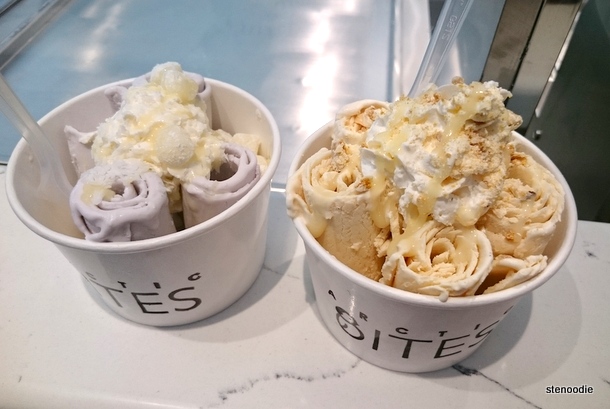 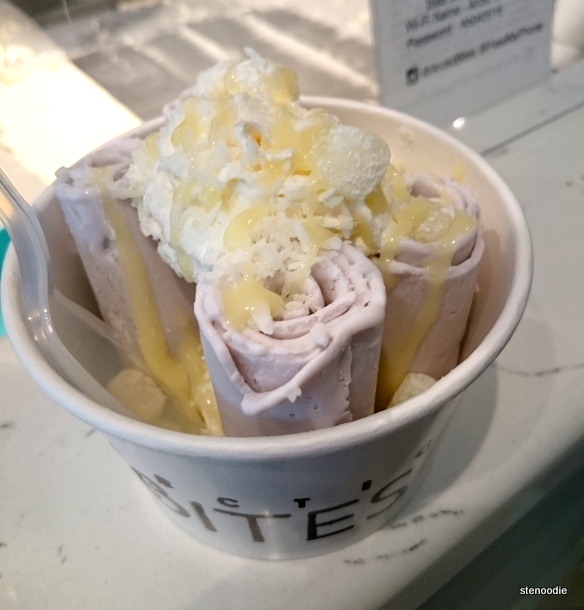 I ended up really enjoying the “Taro with a Twist” more than my own “Mr. Grey”.  The Taro with a Twist had such a delicious taro flavour that was hard not to love.  I absolutely loved the mini mochis that were scattered on top of the pile as well.  Yum!

The Mr. Grey didn’t have a very strong Earl Grey tea flavour (keep in mind that they were so new and still accepting a lot of feedback) but tasted very refreshing and milk-tea-like.  I liked the waffle cookie that made the concoction very crunchy and tasty.  I also really enjoyed the whipped cream with the ice cream; the whipped cream really added to the texture too. 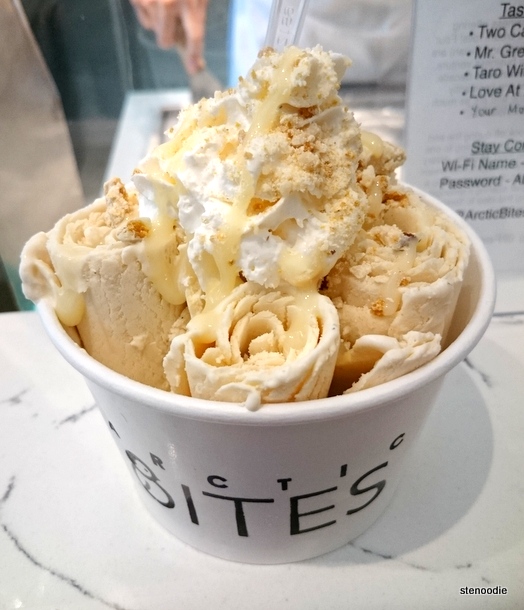 Seeing as there were waffle cookies in this dessert, we actually suggested to one of the ladies that perhaps instead of crumbling the waffle cookies and scattering them on top of the ice cream, they should be put as a whole piece on to the side of the cup for more aesthetic purposes.  She agreed and then implemented the change right away into the next couple of “Mr. Grey’s” that were made.  I really appreciated that she made the change right away.  That’s the sign of a good business owner! 😉 (Also, that’s why you might see other photos of the Mr. Grey on social media looking much nicer than mine if they were ordered after mine.)

The event was very well planned out as not everyone arrived at the same time — since it was a drop-in basis — and thus we didn’t have to wait too long for our ice cream rolls.  Despite only having two working cold plates at the moment, the girls were quick in making the rolls and everyone also was happily mingling with other foodies or taking photos at the photo booths.  The photo booths were a great idea.  They were so fun and there were props as well that we used to take numerous photos with! 🙂 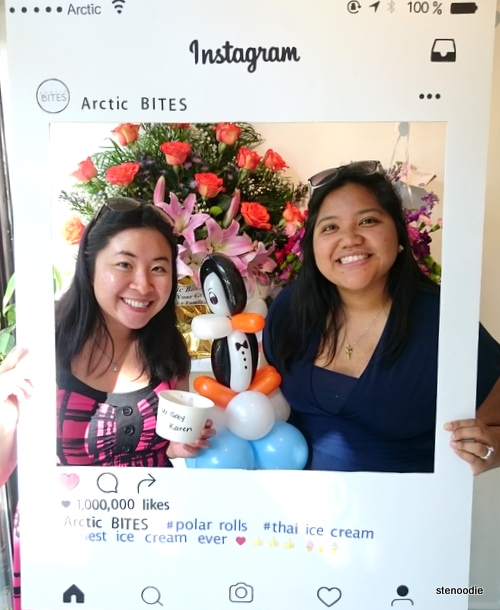 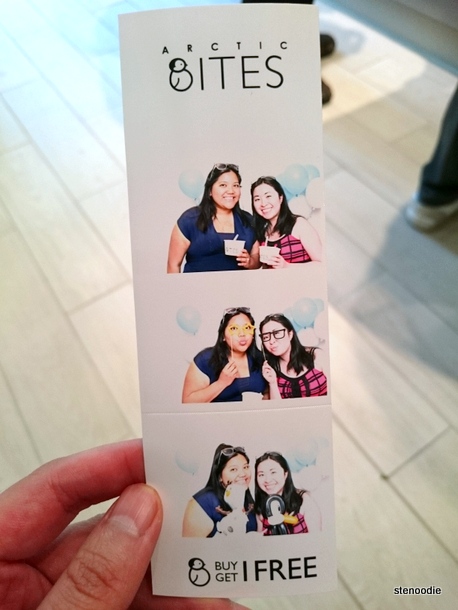 The most fun photo booth courtesy of Pocketbook Cinema (@pbookcinema) 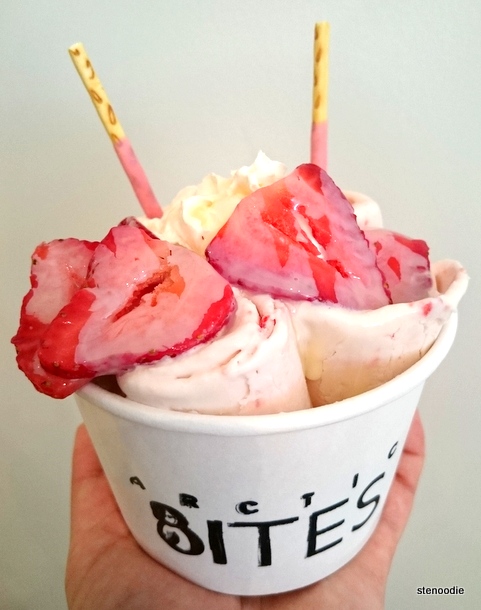 Before Clarissa left, we ordered one more ice cream roll and shared the “Love at First Bite”.  This contained a strawberry base, strawberry topped with strawberry slices, strawberry Pocky, and condensed milk drizzle.  This was such a pretty one!

Again, they are improving their recipe as we speak, but I thought that their strawberry ice cream could have been more rich and sweeter.  The strawberry Pocky was a great touch and the strawberry slices were so fresh!

In my next visit, I definitely want to try the rest of the flavours, the coffee and the malt! 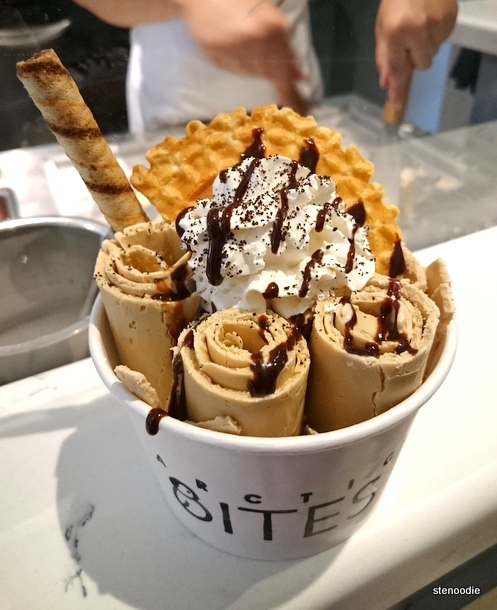 Stole a picture of someone else’s Your Morning Cup (coffee flavour)! It’s gorgeous 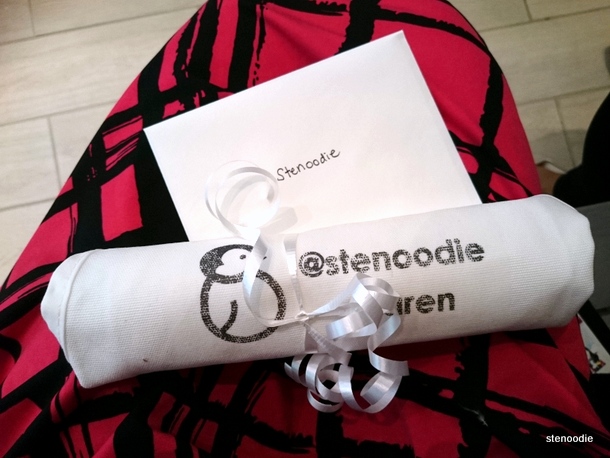 Thank you so much for the cutest apron and card! ^_^ 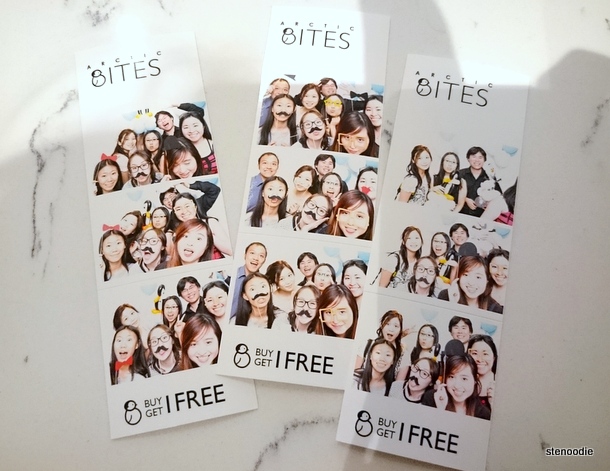 Having fun with the other foodies 🙂 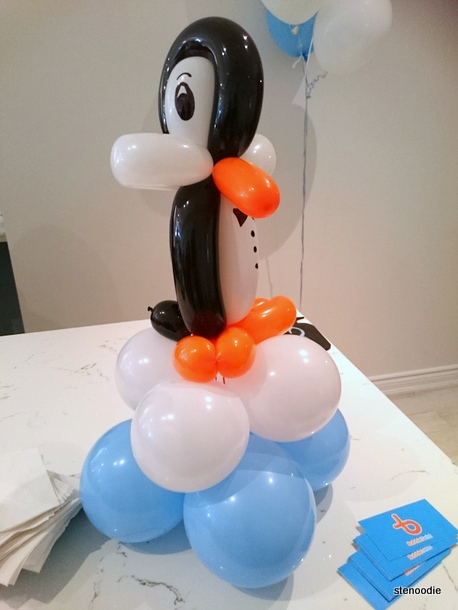 Balloons brought to us by Balloon Twist (@bubble.twist). Cute! There was an Olaf one as well! 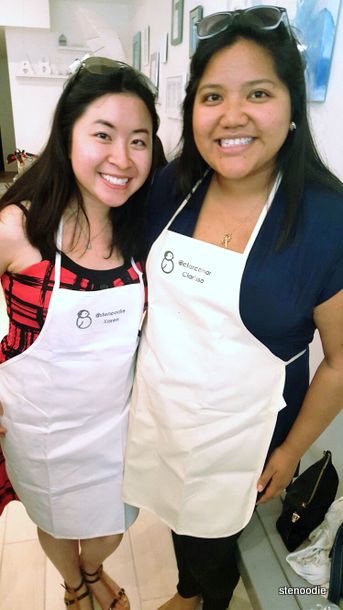 We loved our aprons, trying out Toronto’s first ice cream rolls, and the entire event! Thanks again for having us!

We all had a great time at this #FeedMyPhoneInstaMeet and had a lot of fun eating, mingling, and taking photos.  Thanks again to Patrick for inviting me, the lovely custom made aprons and cards (both so cute), and to Arctic Bites for allowing us to try their desserts first.

I’m sure with the upcoming months ahead of hot weather, we will be seeing many more happy customers, new flavours, and ice cream/Polarolls in Toronto! 🙂  Can’t wait to hear about it!

FTC Disclaimer:  Although @feedmyphone invited me to a complimentary tasting to showcase Arctic Bites, the opinions expressed here represent my own and not those of the companies.