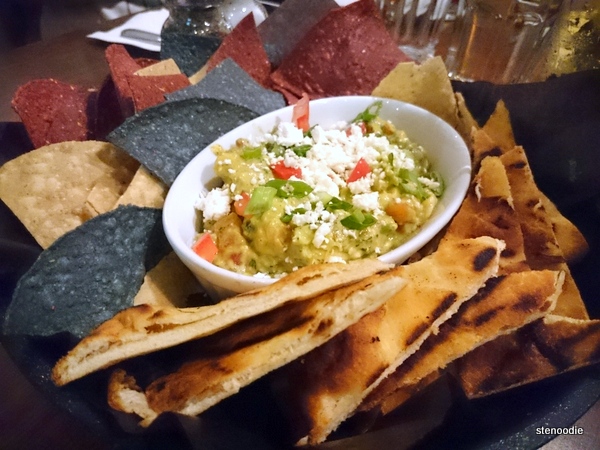 After our sweaty and fun bubble soccer game, we went to Union Social Eatery for Anna and Rosa’s birthday dinner.  Union Social Eatery is located on Yonge Street just north of Sheppard Ave. E in Toronto.  It is a casual gastropub restaurant that serves your regular pub and bar food but with some unique varieties (they have two other locations; one at St. Clair and one in Mississauga).  I was excited to try it having walked by the restaurant before on Yonge Street.

We were a table of 11 people and we sat in a semi-private dining room area off of the main dining lounge.  There was a large TV screen there and it was a nice atmosphere to enjoy a dinner with friends (there was free wifi too).  The space was actually a lot larger than what I expected for a restaurant on Yonge Street. 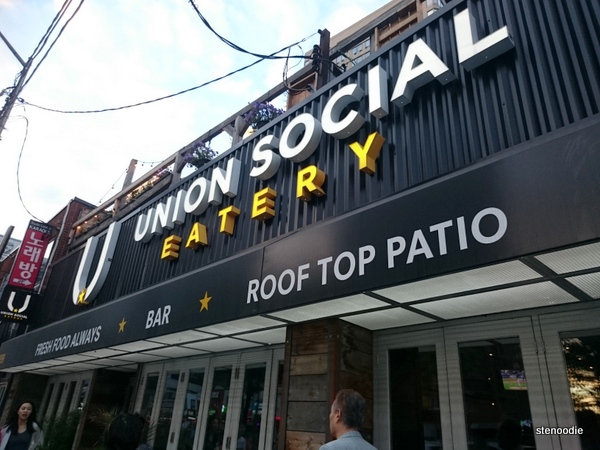 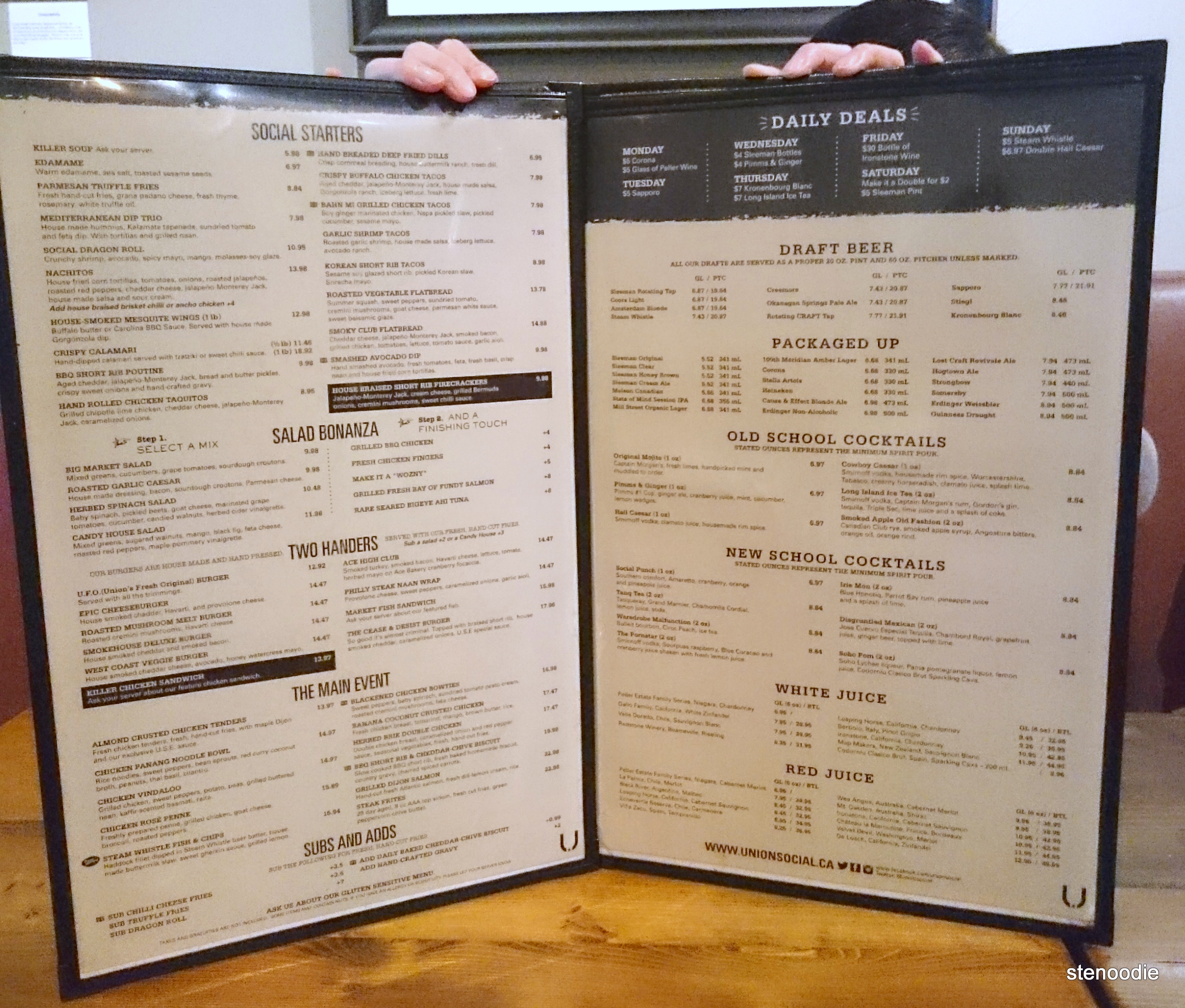 Our end of the table were okay with ordering some appetizers to share.  Betty and I picked the House Braised Short Rib Firecrackers, Banh Mi Grilled Chicken Tacos, BBQ Short Rib Poutine, and the Smashed Avocado Dip.  Betty also got the Killer Soup which was a coconut chicken soup that day.

What was interesting when we were looking at the menu was that the majority of the items were all featured around chicken.  There was only one steak and one salmon main.  I wonder why?

The server was efficient that made sure that everyone had their drinks and orders in for each person.

The Smashed Avocado Dip arrived first.  It had hand smashed avocado, fresh tomatoes, feta, fresh basil, and was served with crisp naan and house fried corn tortillas.  I really enjoyed the smashed avocado dip with the naan.  It was a refreshing and healthy dish. 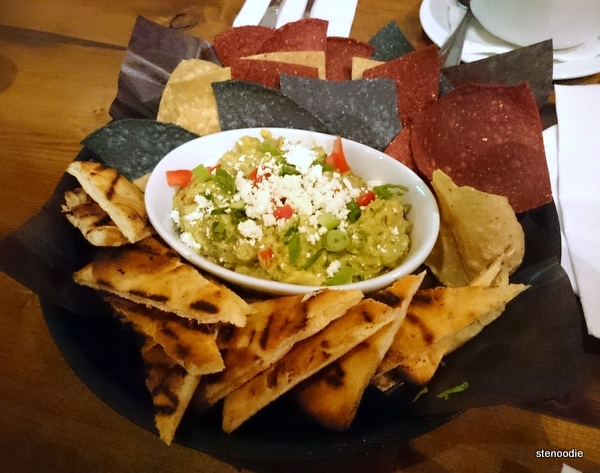 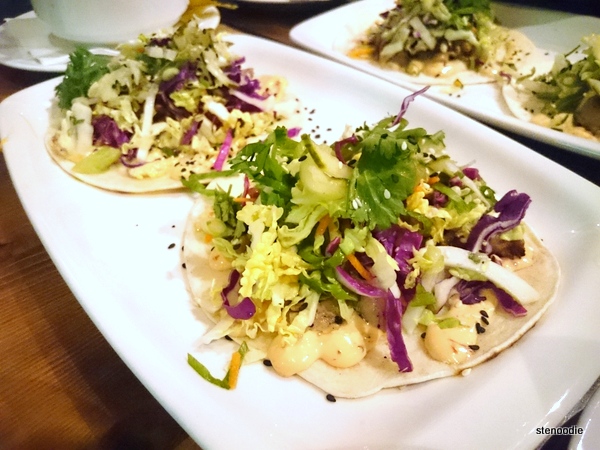 The Banh Mi Grilled Chicken Tacos were quite large, and it made sense since each one was $4 each.  It had soy ginger marinated chicken, Napa pickled slaw, pickled cucumber, and sesame mayo.  Yum!  I actually was very impressed with the chicken tacos because the flavours of the toppings all melded well together and the chicken was quite flavourful and juicy!  The soft tortilla also wrapped everything together so nicely and was “soft” in each bite.  It was really, really good! 🙂 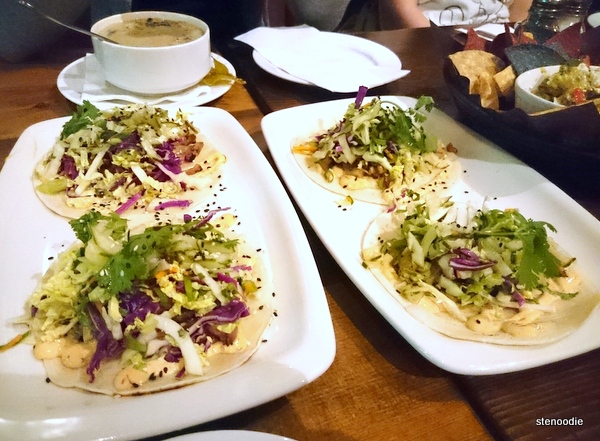 We ordered four of these Banh Mi Grilled Chicken Tacos to share. You can also see the Coconut chicken soup in this photo 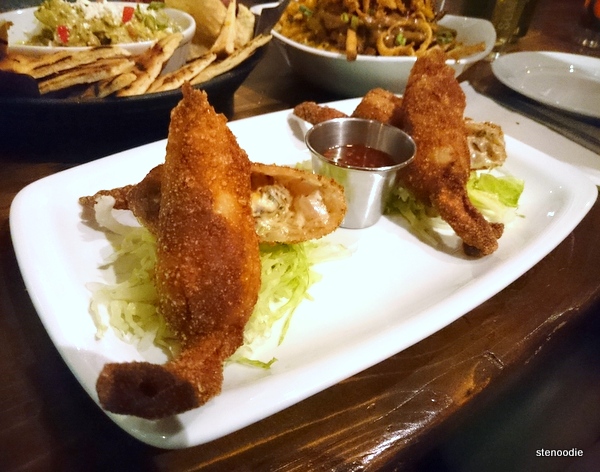 Everyone was curious about what exactly the House Braised Short Rib Firecrackers were.  It turned out to be extremely delicious and I wish I had more!  These were assembled to look like ‘firecrackers’ on the outside — the ones you pull and they crack.  It had jalapeño-Montrery Jack, cream cheese, grilled Bermuda onions, cremini mushrooms, with a sweet chili sauce on the side.  It was basically cheese, onions, and mushrooms all wrapped up together in a firecracker shape which was absolutely delicious.  The jalapeño-Montrery Jack cheese and cream cheese were so delicious.  I’m a huge cheese fan so this absolutely fit the bill.  Yum!  Like I said, I would definitely recommend these and order them again. 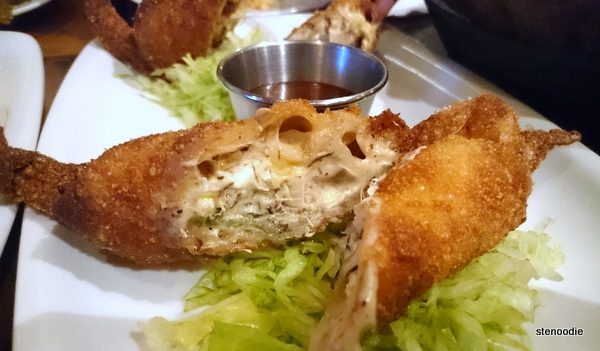 You can see the insides of the firecrackers here

The BBQ Short Rib Poutine had aged cheddar, jalapeño-Montrery Jack, bread and butter pickles, crispy sweet onions, and hand-crafted gravy.  This was yummy too.  The French fries were distinctively thin and a bit twisty.  As always with most poutines though, I think there could have been a bit more short rib meat in it. 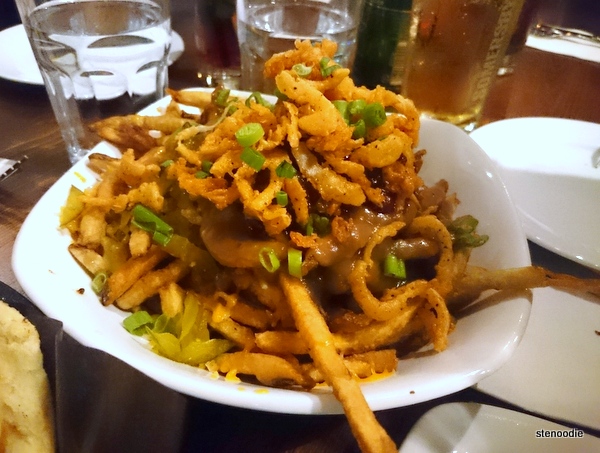 I tried a piece of chicken from the Killer Soup coconut chicken soup that Betty got and I was surprised with how rough the chicken tasted.  It had a ton of coconut broth in it which would have been a great soup had the chicken tasted more tender.  There were a lot of chicken in her soup too! 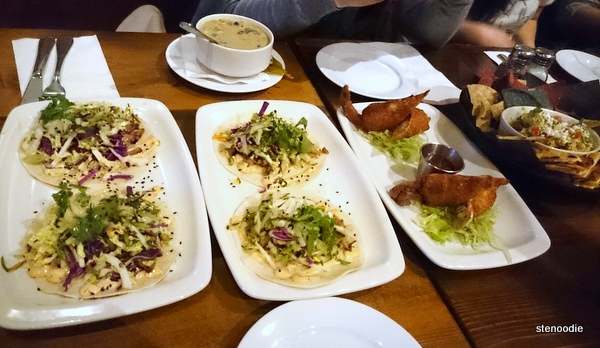 The food I had that night to share with friends

The end of the night was complete with some surprise cakes for Anna and Rosa.  There was a chocolate one, Mars Bar Brownie (warm, Mars studded, dark chocolate, walnuts, mint chocolate ice cream, house made caramel), and a cheesecake one, NY Style Union Cheesecake (made fresh in house, wild blueberry and port compote).  Both were delicious! 🙂 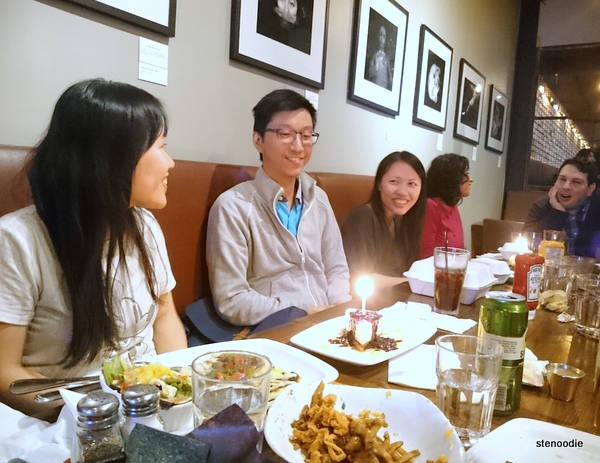 I didn’t get a photo of the individual dessert slices, but here is a candid photo of the birthday girls with their cakes (and Michael lol)

I’m really glad that I got to try Union Social Eatery for dinner.  I wouldn’t mind returning again to try more of the other offerings that they have on their large menu — for lunch or dinner! 🙂  I liked the food that they had, everything was decently priced, and it was nice and spacious inside; great for groups too!