A First Look at the Monga Fried Chicken in Toronto

Posted on September 7, 2017 by stenoodie 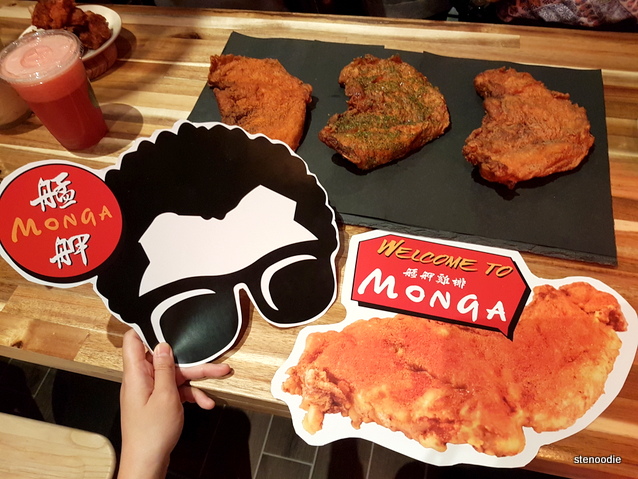 On a Tuesday evening at 6:15 p.m., the tasting began.  As usual, there were a lot of food Instagrammers in the house, both new and old.  I took some photos of the products on display.  Shortly thereafter, Darren welcomed us officially to the event and the owner of the store, Steven, gave a very thorough and detailed introduction about Monga Fried Chicken to us. 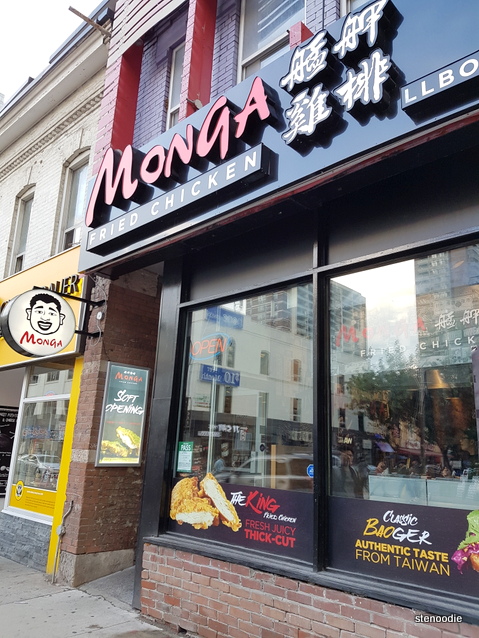 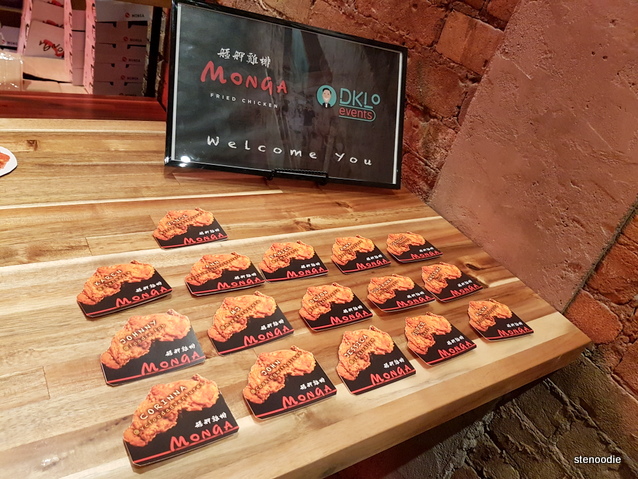 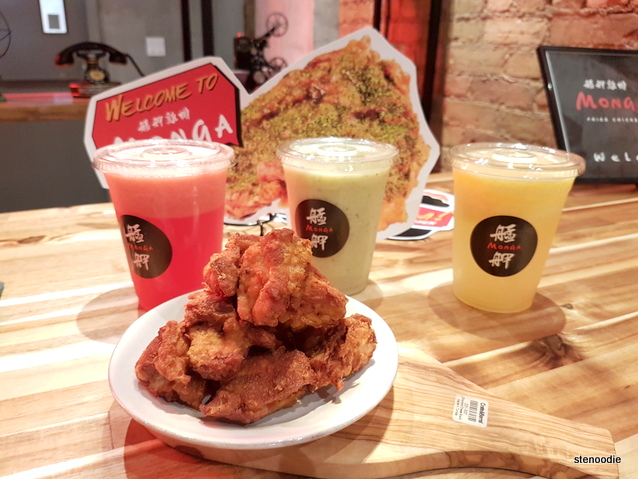 Chicken nuggets and drinks on display 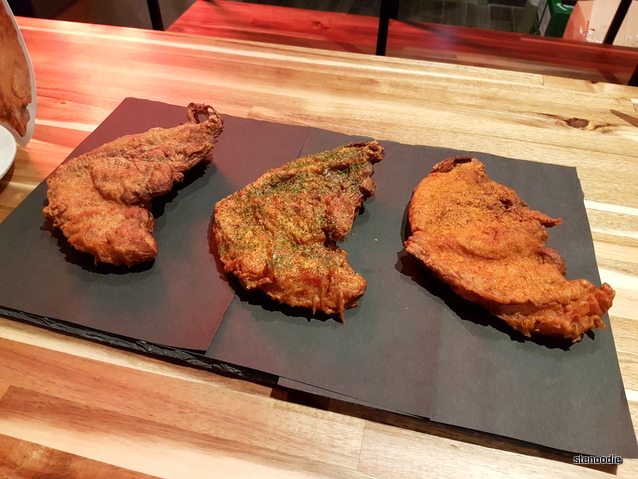 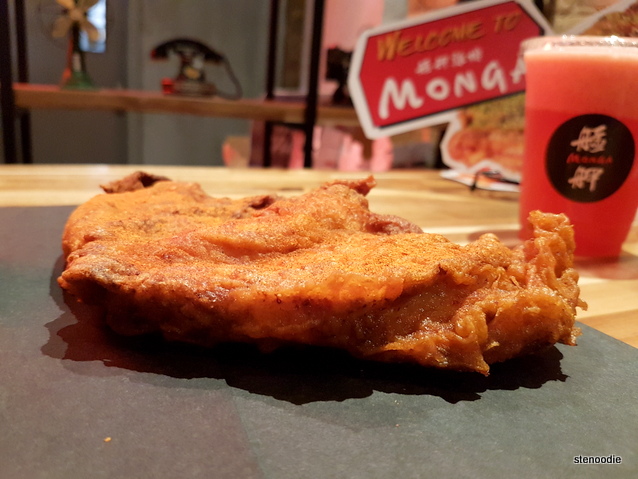 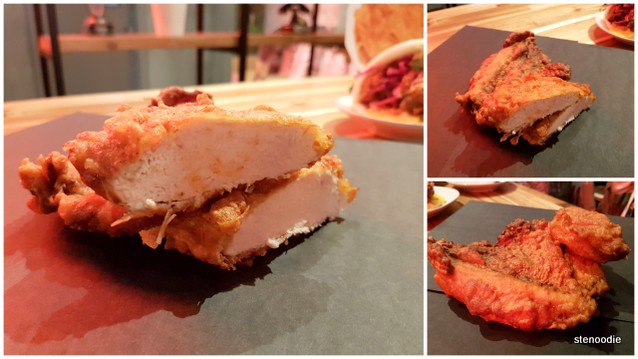 Look at how big and thick it is 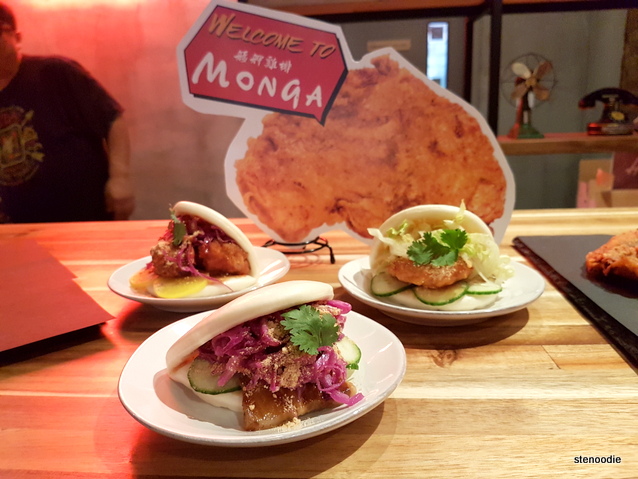 Three types of baogers on display 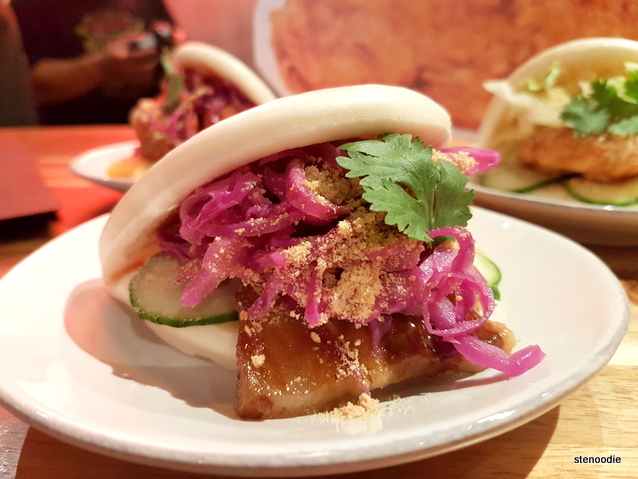 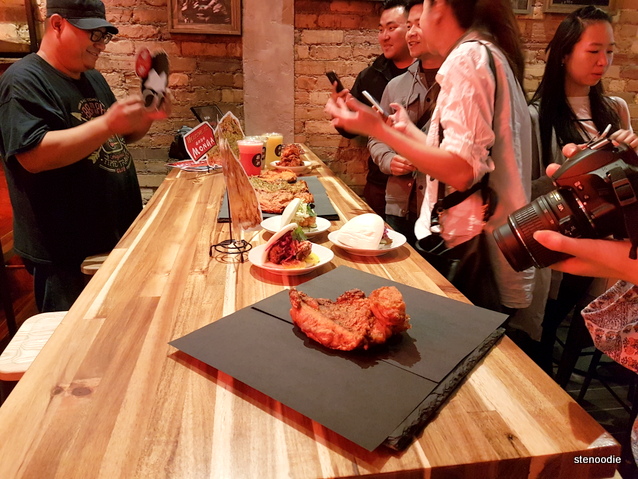 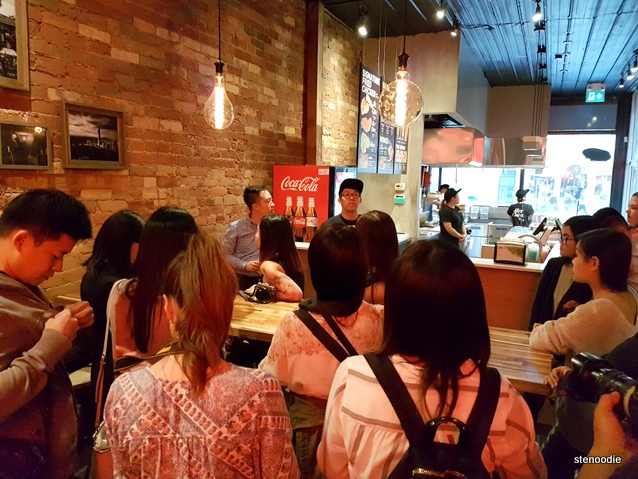 In his speech, I learned that:

I liked that Steven was very clear and articulate in his speech which allowed all of us to correctly capture exactly what he shared with us. 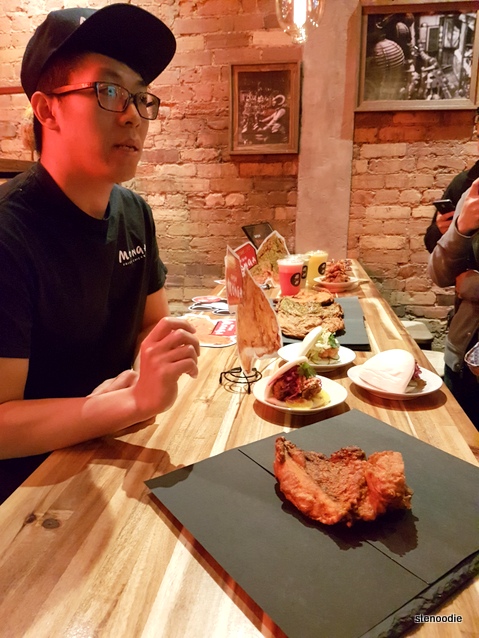 Steven explaining the items at Monga

After that, the tasting began!  We were each welcome to enjoy one piece of fried chicken, a choice between a Baoger or chicken nuggets, and a drink. 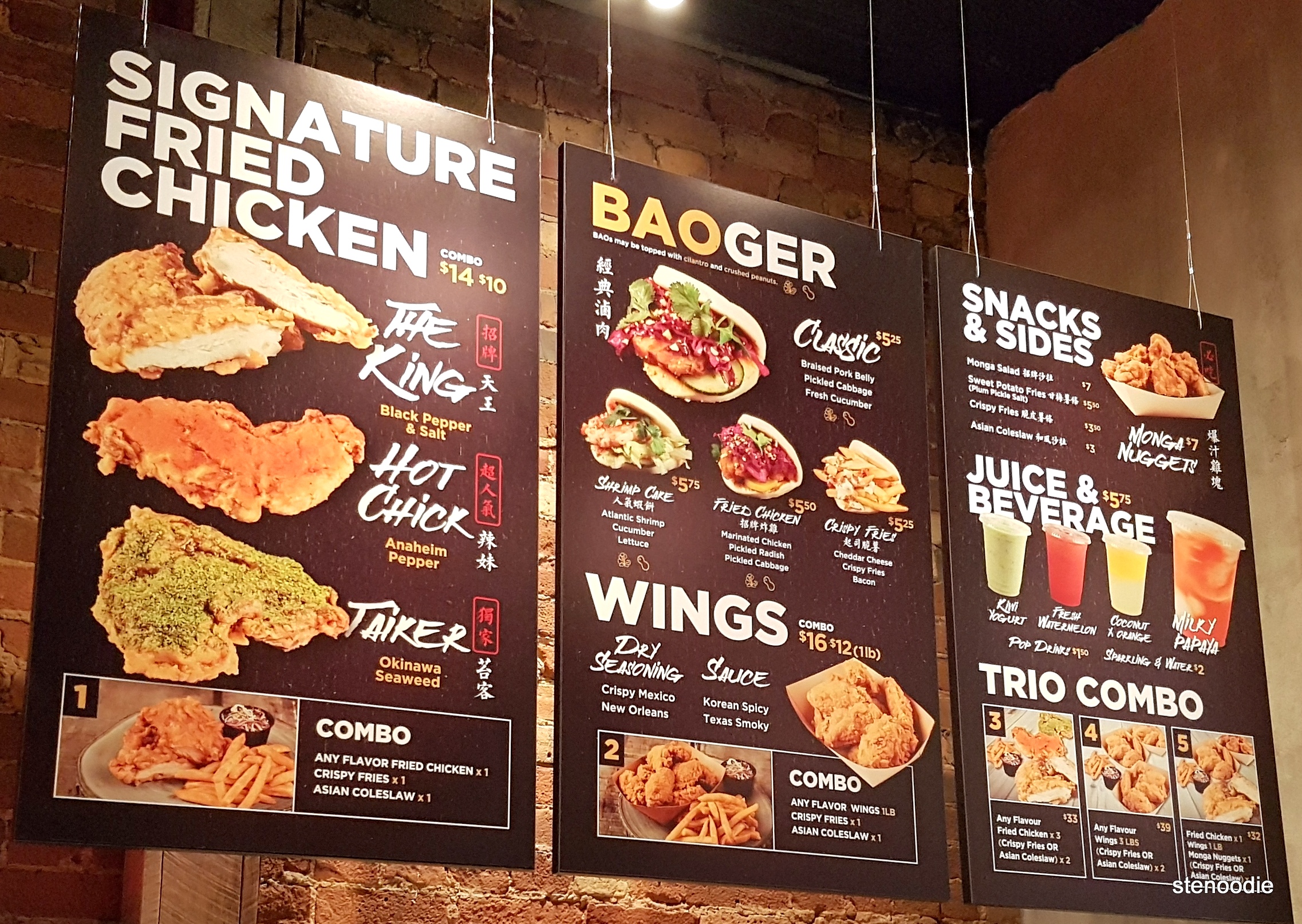 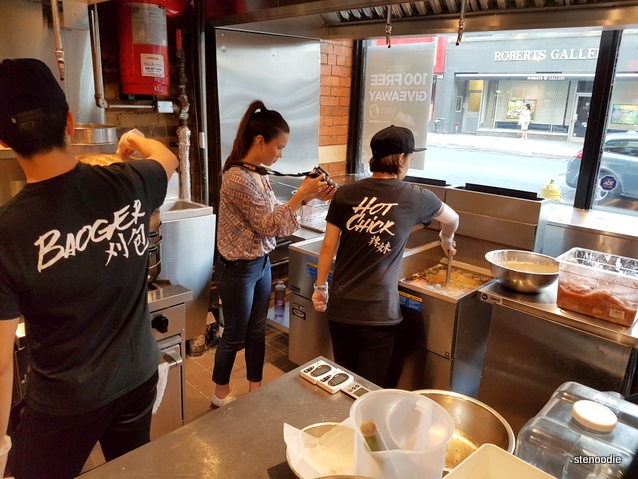 I love that “hot chick” shirt. So creative 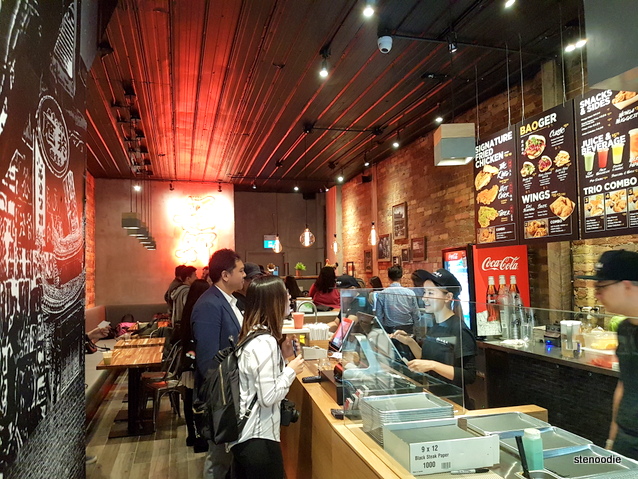 They are a fast casual restaurant

Considering that we were so many of us in the house, the process to order the chicken was seamless and efficient.  I ordered the original fried chicken, The King, the Monga Chicken Nuggets, and the Milky Papaya (I was lucky enough to be one of the first five lucky ones to order it).  I was also lucky enough to share my order of Monga Chicken Nuggets and Original Fried Chicken with Casey’s Pork Belly Baoger and Seaweed Fried Chicken.  This way, we could try more of what Monga Fried Chicken had to offer. 🙂  I love optimizing my food options at restaurants. 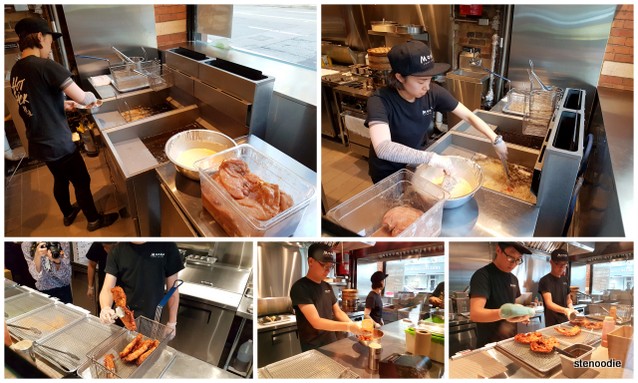 Watching how they deep fry the chicken, rest it, and then powder it with the seasonings 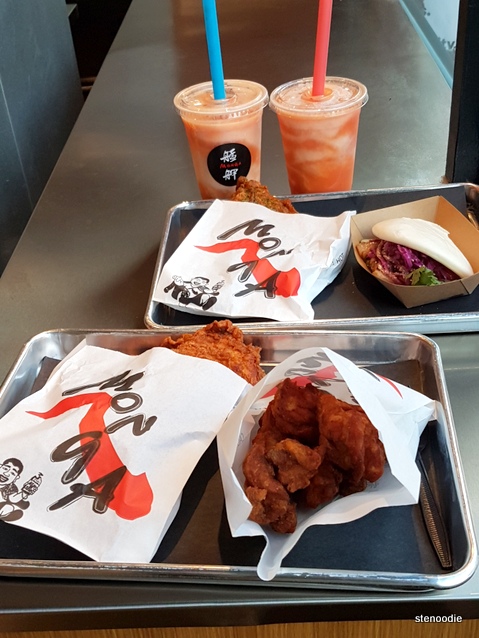 Two sets of tasting items for myself and Casey

Before we ate though, we of course went outside to take some photos of the food… although honestly, I could have done without it and snapped a quick photo and then begin eating.

I will participate in these photoshoots but I secretly despise it (although it’s not of a secret now that I’m sharing it with you ;)).

I despise it because it: 1) paints an embellished picture of what is happening — food is food; just take a pretty photo and then eat it; 2) after a unnecessarily prolonged photoshoot, it makes the food all cold; and 3) everyone ends up having the same photo.  Luckily, the fried chicken was very hot from the fryer so not much heat was lost during the photoshoot, but still… 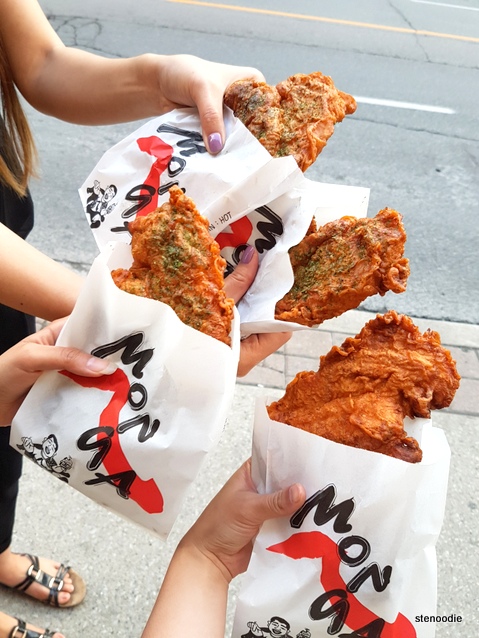 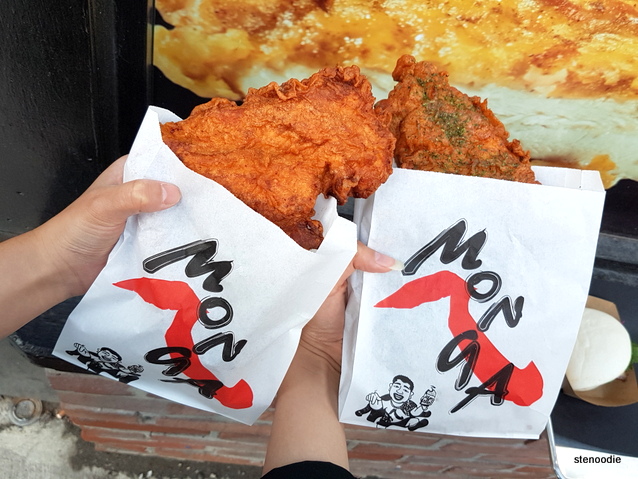 The two types of fried chicken I tried that day 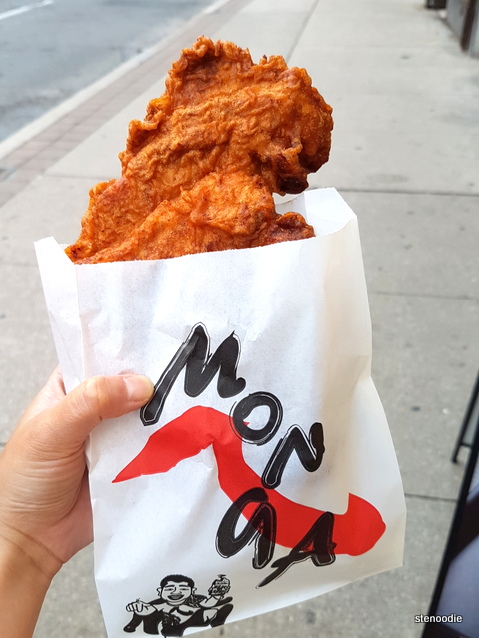 The Milky Papaya is a take on the classic Taiwanese milk papaya.  I thought that it was very good in terms of the quantity of papaya that was in the drink.  You could really taste the papaya with each sip.  It wasn’t very sweet, however, which is a good thing for some and a lacking part for others. 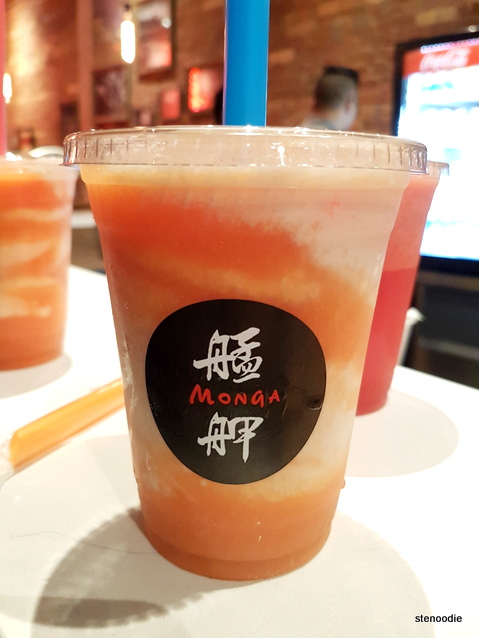 The Monga Nuggets had a dusting of spicy powder — it was a choice that I accepted.  The Nuggets tasted okay to me; it wasn’t too seasoned but the pieces were indeed big and boneless. 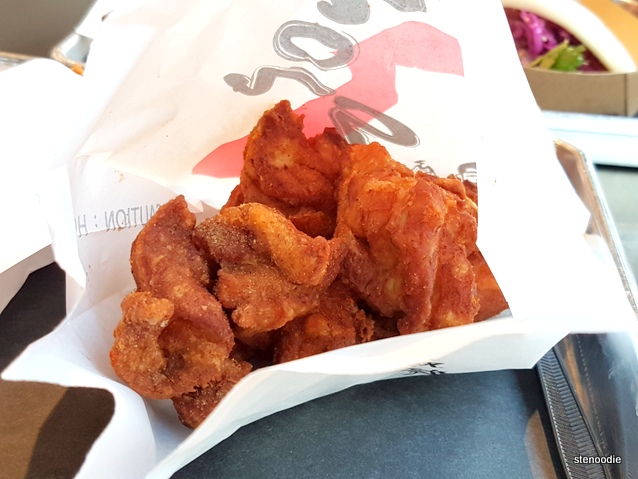 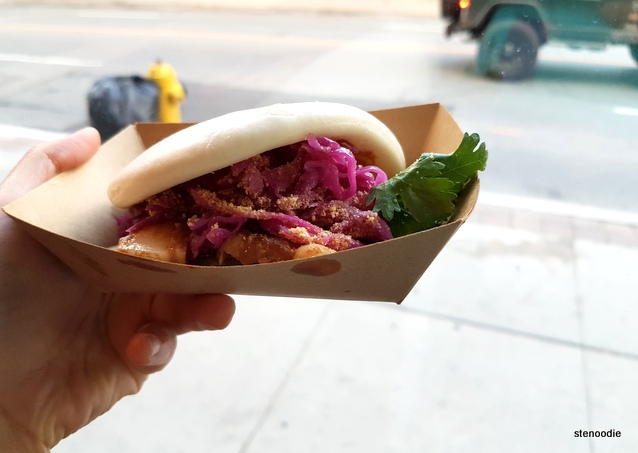 I was extremely impressed with the Classic Baoger!  The Braised Pork Belly Baoger had pickled cabbage, fresh cucumber, and topped with cilantro and crushed peanuts (although you can ask for it to be without the toppings).  I was impressed with this because although we ate this while it was already cold (due to the previously mentioned photoshoot), the bao bun was still very soft and squishy — which is very rare for baos.  Usually when baos are cold, they become tasteless and hard.  (It must be because they import the buns from Taiwan!)  The braised pork belly was very fatty and delicious.  I commend their Baoger for sure!

The King Signature Fried Chicken had a dusting of black pepper and salt.  Since it was also topped with honey, I could taste the sweetness of it.  However, I could barely taste the black pepper or salt part of it.  In essence, it was a big thick-cut piece of fried chicken that was fairly bland.  It wasn’t too crispy either as there wasn’t too much batter on it.  When you got to the middle part of the chicken, it could be quite dry as well.  There was no juice or fattiness in it. 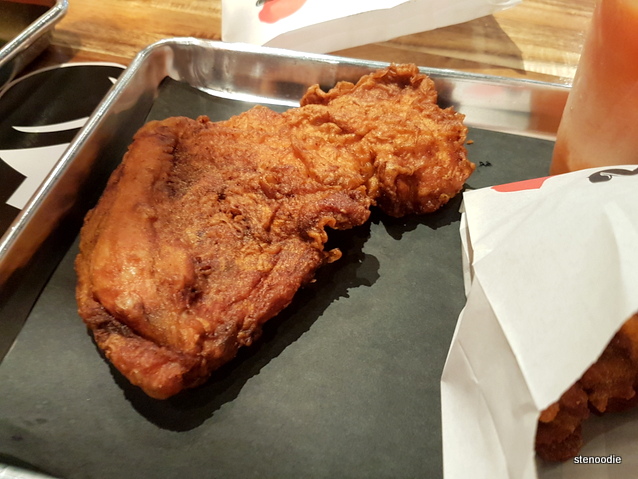 The Taiker Signature Fried Chicken that had Okinawa seaweed on it tasted the same in terms of its insides as The King.  There wasn’t enough Okinawa seaweed dusted on it to taste much different in my opinion. 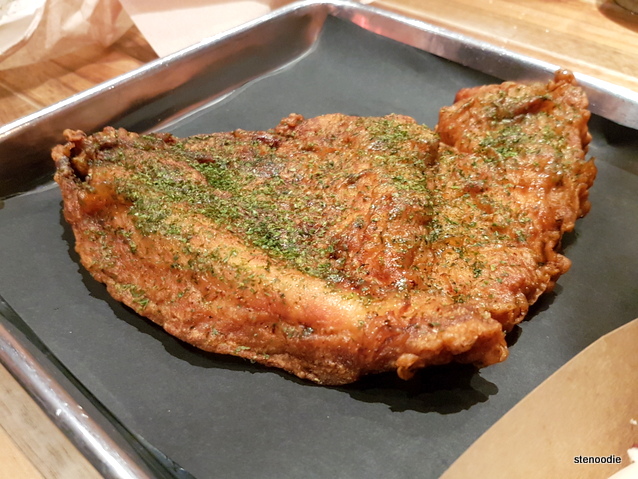 Since the portion of the chicken was so large, I definitely wasn’t able to finish the cutlet in one sitting.  I brought the rest home in a cute little box to enjoy the next day. 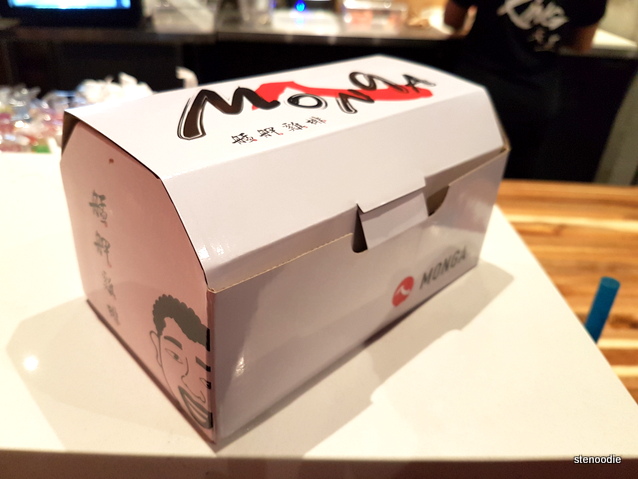 **By the way, Monga Fried Chicken is having their Grand Opening this Friday, September 8, 2017!  Starting at 4 p.m., they will be giving away one free piece of fried chicken to the first 100 people in line!  Everyone else afterwards will get a free fresh watermelon juice with the purchase of a fried chicken or 1lb wings or any other combos.  Don’t miss this if you want to try their chicken out! 😛

Also: From September 13 to Sept 24, 2017, if you go to their store and mention my blog and Instagram name, stenoodie, you can get 10% OFF their fried chicken, wings, or combos!  Happy eating! 🙂 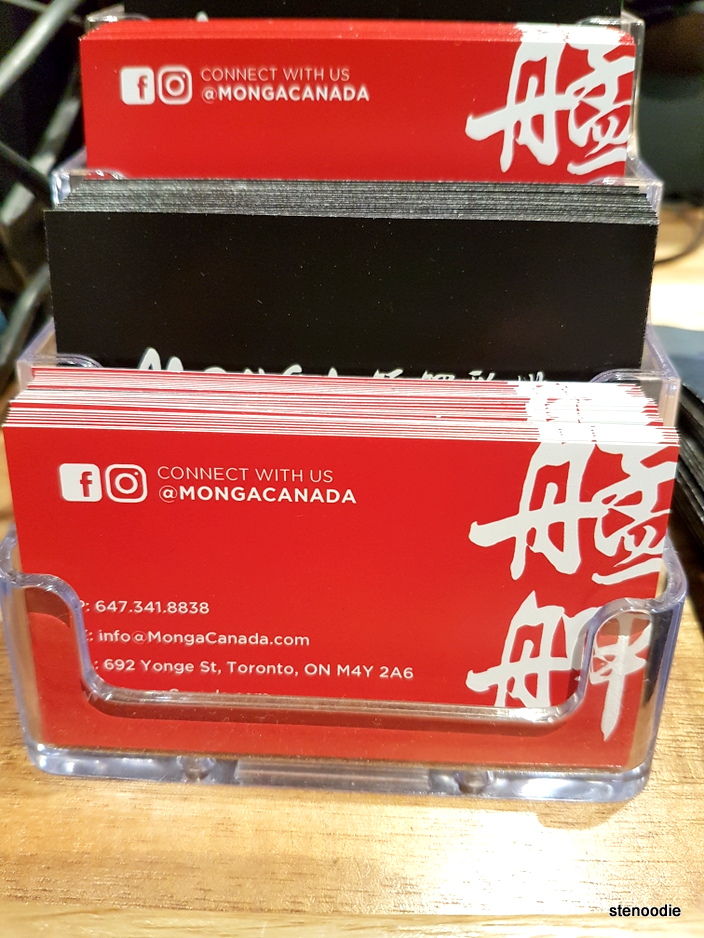 FTC Disclaimer:  Although DKLoEvents and Monga Fried Chicken invited me to a complimentary tasting, the opinions expressed here represent my own and not those of the companies.