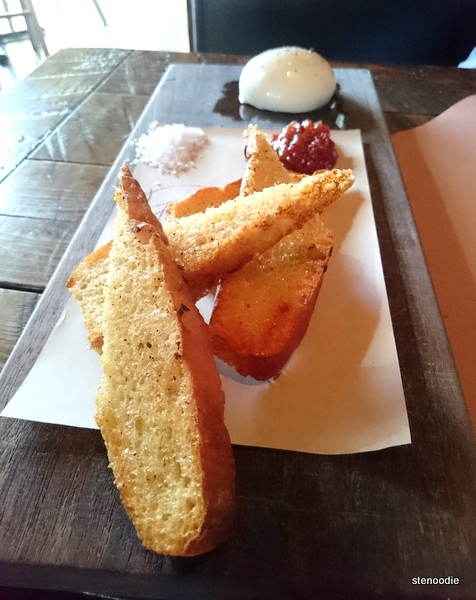 The first time that I visited this Italian restaurant that specializes in fresh pasta and pizza, I visited the Scaddabush Italian Kitchen & Bar that was located downtown on Yonge Street near College Station.  Back then, this was the first location in Toronto.  Now, Scaddabush has expanded to not only Richmond Hill and Mississauga but soon to Scarborough as well.

Christal and I had dinner here on a Wednesday summer evening at 6 p.m.  When I walked into this Richmond Hill location of Scaddabush, I was immediately impressed with its decor and joyful family-friendly atmosphere.  There was a fun-looking clown on a table that greeted each customer when you walk in near the hostess table. 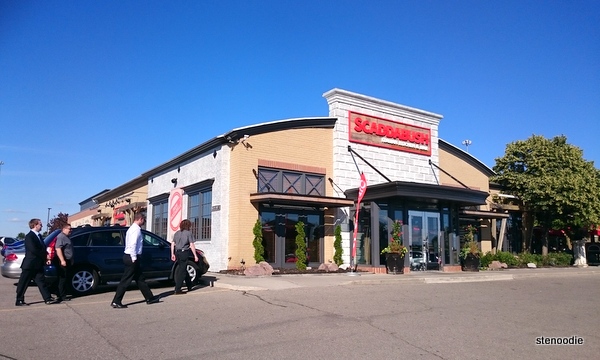 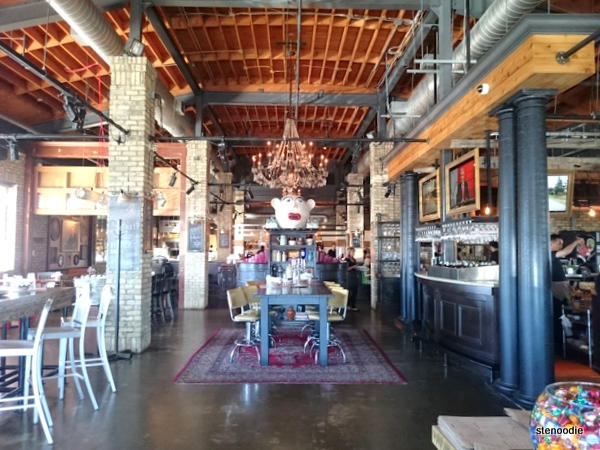 Stunning lobby of the restaurant 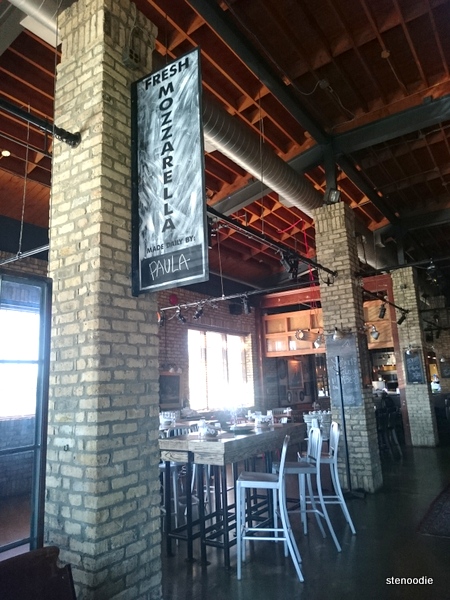 Fresh Mozzarella made by Paula that day

I had heard a lot about the fresh mozzarella that Scaddabush serves but hadn’t had a chance to try it yet.  Thus, Christal and I ordered that to try for our appetizer.  Our server that night was very pleasant, attentive throughout the entire night, and friendly.  I asked about watching the fresh mozzarella being made (since I knew that was a perk of ordering that dish) and she told us we could go right up to the counter where the kitchen was to watch it being made.

We had a really informative session listening to her talk about the fresh mozzarella and watching her make it.  I appreciated how patient and willing she was to guide us through the process.  I took a few Boomerang videos to record the process.

They put fresh cubed mozzarella into a cold water vat and then stretched the cheese and molded it after a few minutes.  She used her fingers to make the mozzarella into a ball and manipulated it so that it was very plump.  The process was actually easier than I thought (at least it looked like it).  After the mozzarella was plump enough, she placed it on the wooden platter.  After a few drizzles of extra virgin olive oil and sprinkling of black pepper, it was ready to be served to the customer.

The first fresh mozzarella ball she did was for the Burrata cheese which was a popular one out of the fresh mozzarella selections but it was spicy.  Christal and I opted for the Naked Fresh Mozzarella this time since we had never had this before.  We watched her make the one for our table as well. 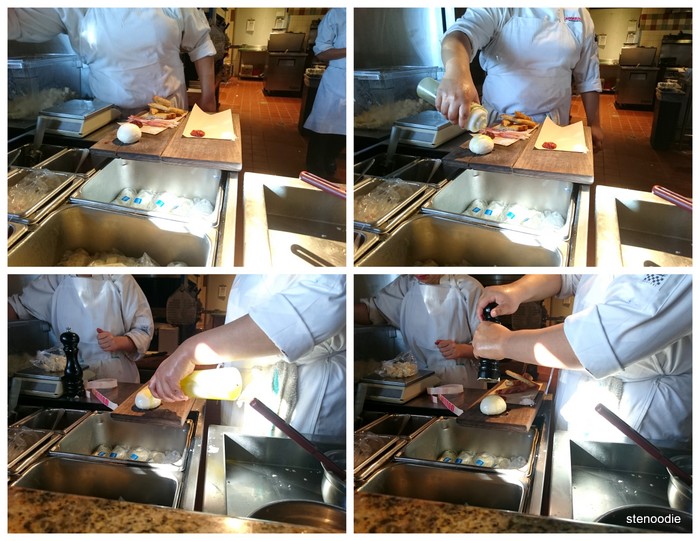 After the fresh mozzarella was done being molded by hand, extra virgin olive oil and black pepper are added to it

That was a very quick and fun experience. 🙂 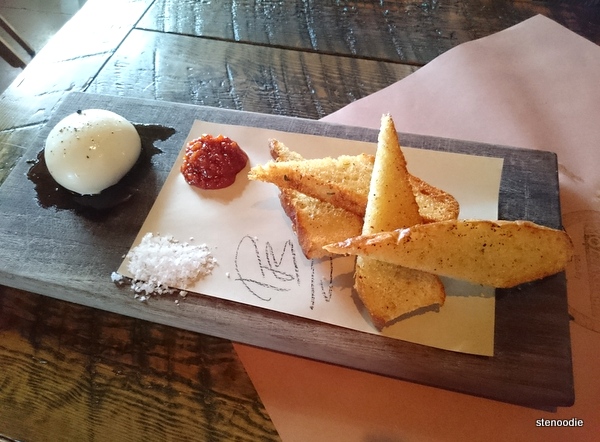 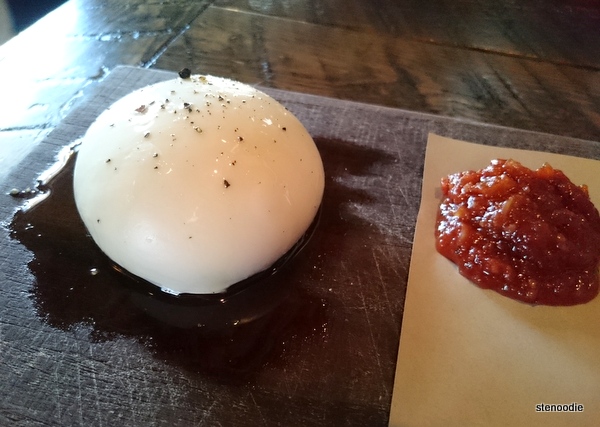 So cute and plump!

We also ordered the Sophia Pizza and the Baked Penne Carbonara.  I actually ordered a pizza and pasta to share with a friend the first time I was at Scaddabush too! XD  This was fine though because I did want to try how the Richmond Hill location prepared the food. 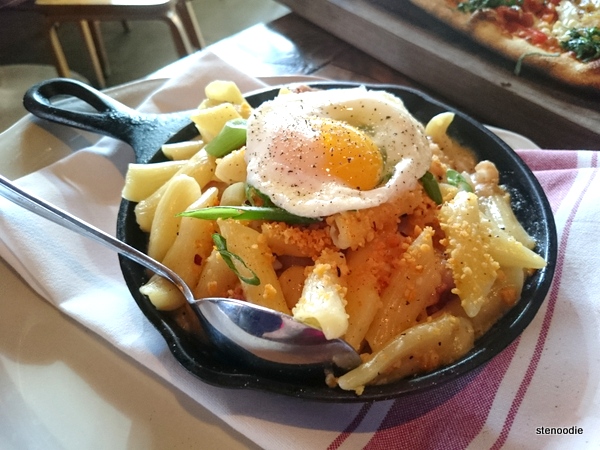 The Baked Penne Carbonara featured their fresh pasta which was made in-house daily.  This dish contained Parmesan cream sauce, smoked bacon, scallions, garlic, black pepper, and a soft poached egg.  Looking back at my post that I did when I went to Scaddabush for the first time, I am actually surprised that I did order this same dish before.  Haha, what are the chances… I think this Baked Penne Carbonara tasted better this second time around.  The Parmesan cream sauce with the soft poached egg (after it was poked through and the yolk was released onto the penne) tasted really good!  The smoked bacon pieces in this also tied up all the flavours together.  Christal really enjoyed this one! 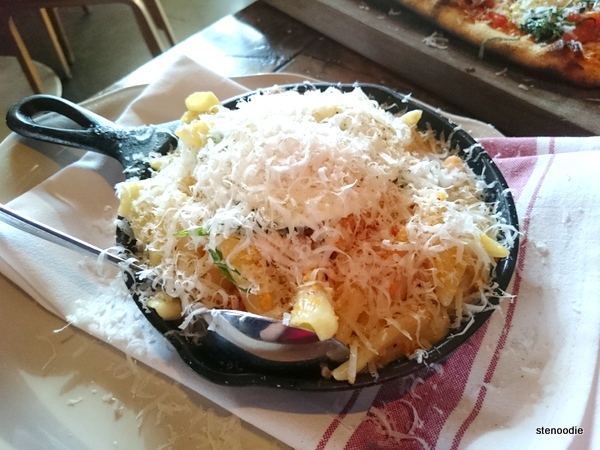 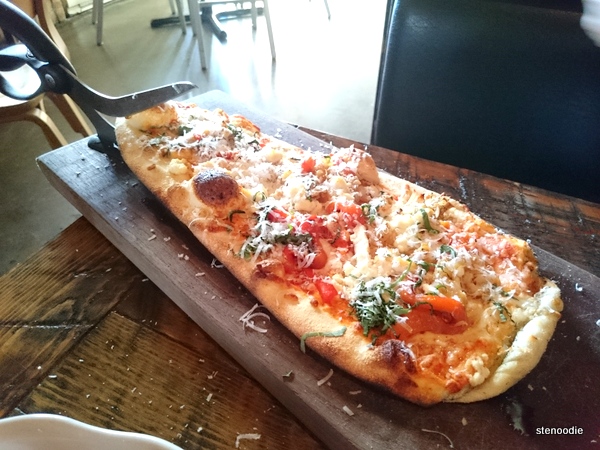 The Sophia Pizza had marinated chicken, goat cheese, roasted red peppers, caramelized onions, mozzarella, San Marzano tomato sauce, and fresh basil on it.  It came with a easy-to-cut pizza scissor that could stand upright if you didn’t need it.

I liked this pizza!  The marinated chicken and everything else on the pizza made it a very satisfying and fulfilling pizza.  When I bit into it, I commented to Christal that it was “fluffy”.  I liked how all the toppings went well together.

We chatted for a long time into the night since it had been a while since we had chatted together in person.  Our server was attentive and kept checking back to see if we needed anything and brought us a second pitcher of water after our first one was done. 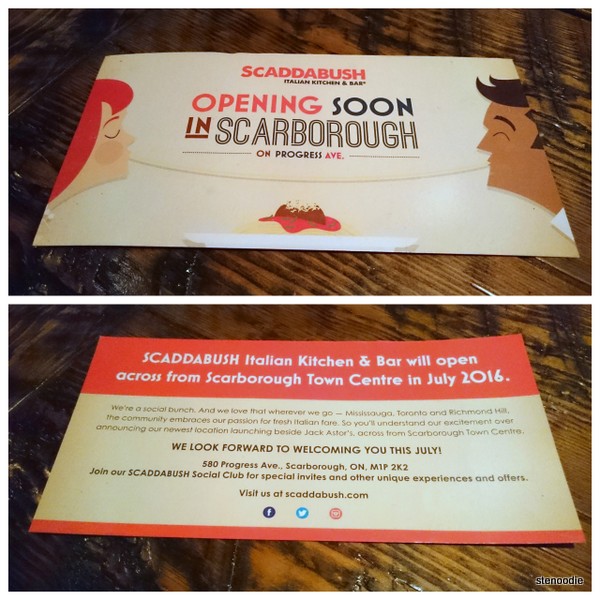 I did enjoy the fresh mozzarella experience.  Next time, I would want to try the spicy version, the Bomba Burrata one.  I also wouldn’t mind coming back to try their other pasta dishes or their mains.  It’s nice to see that an uptown Scaddabush exists in Richmond Hill! 🙂  This kind of environment is really fit for a girls’ night out or a date! 😉 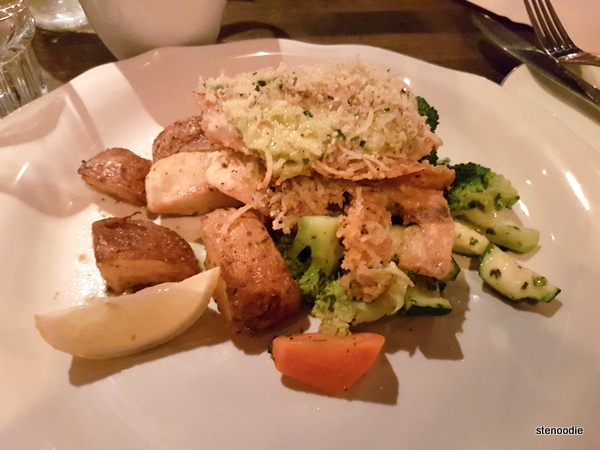 January 14, 2018:  I’ve since been to this Richmond Hill location of Scaddabush many times… I didn’t blog about the food that I ate on those other visits but on January 14, I attended a friend’s birthday bash at Scaddabush.

On this visit, I ordered the Crusted Snapper since I hadn’t yet tried any of their mains yet up to this point.

Visually, the Crusted Snapper looked terrible.  Taste-wise, it was not bad.  I liked the potato Parmesan encrusted snapper.  Luckily, the fish wasn’t dry and was moist to a certain degree.  I liked the vegetables and potatoes that accompanied it.

We had a group of 18 people and the server did a great job making sure we all got our orders at the same time and didn’t miss anything.  She also provided plates, forks, and a knife for us for the birthday cake (she put sparklers on it too).  Such great service and I didn’t think there was a cake cutting charge either!  Yay! 🙂