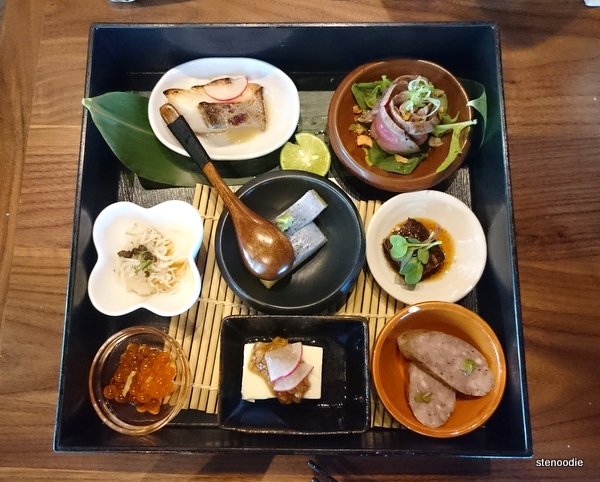 Happy summer!  This is especially felt by teachers and educators around the world who yearn for the summer holiday months especially when it gets to the midpoint of the year.  Tracy and I had a great dinner at Kiu Japanese Restaurant, a relatively new Japanese restaurant that opened up in Markham where the Cineplex VIP Markham Theatre is to mark off the summer months and beautiful weather in Toronto.

Kiu Japanese Restaurant is located on the second floor of the complex building.  You can’t miss it once you are on the second level as it is a sleek interior space next to the Goodlife Fitness Gym and opposite to the Cineplex movie theatre. 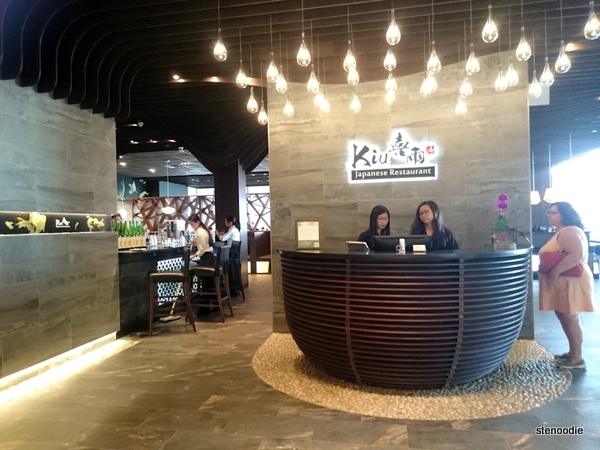 I had heard about this restaurant serving good sushi, Japanese appetizers, and especially ramen from Ramen Isshin (a ramen house located downtown — which I have visited and blogged about).  I was excited to try this place out!

I walked into Kiu Japanese Restaurant at 6 p.m. on a Monday.  They appeared to be getting ready for the busy night ahead as I had to wait a few minutes before the hostess at the front could address me.  When I told her that I was a party of two, she asked if I would be able to return the table back to her at 7:30 p.m.  I said, sure, it hopefully wouldn’t be a problem.  Within a couple of minutes, she led me to a table.  On my way there, many of the staff there greeted me in Japanese and wore very friendly smiles to welcome me in. 🙂

It was such a large space inside! 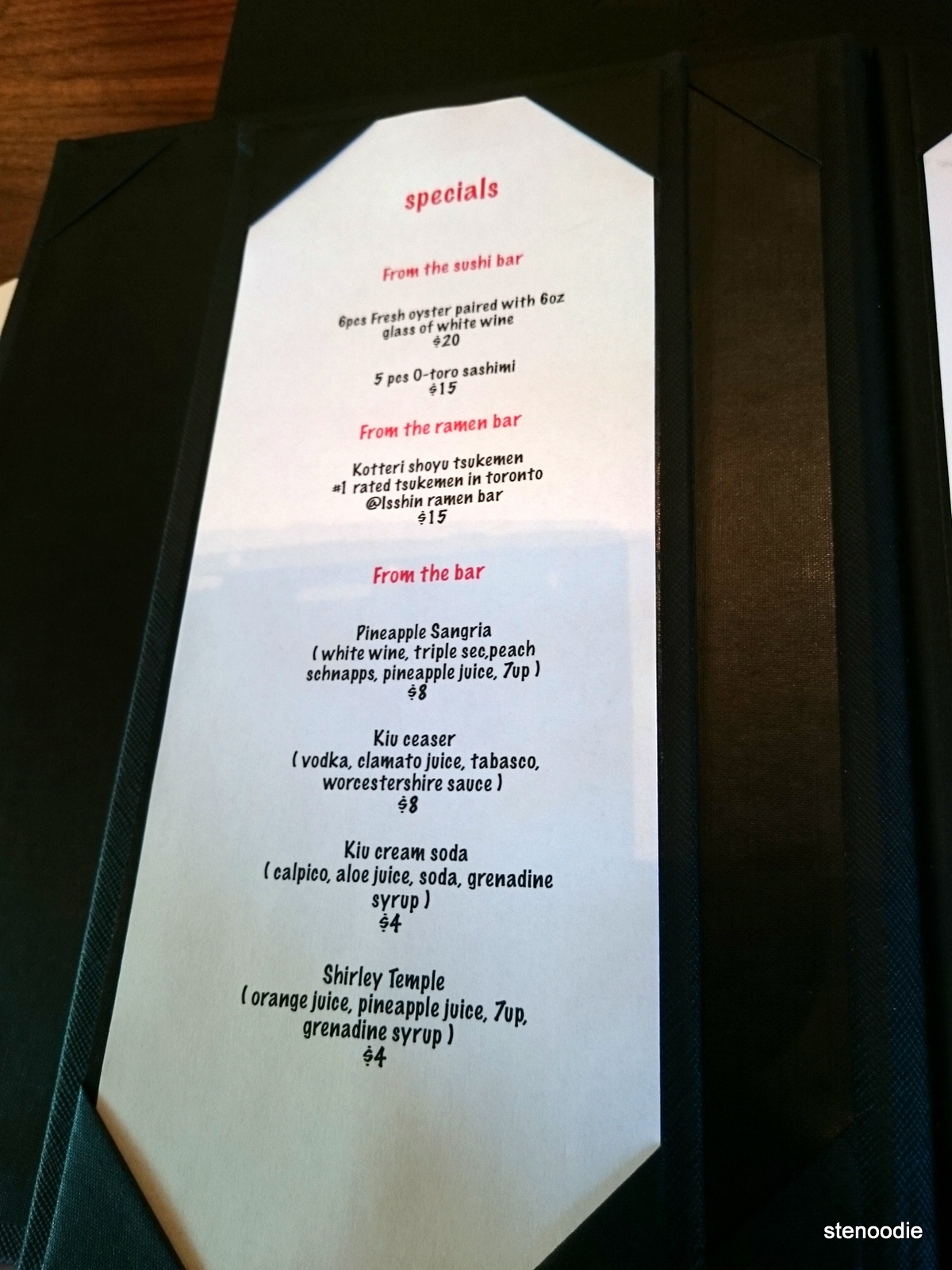 I was really impressed with the space of Kiu Japanese Restaurant.  It was so spacious, large, and sleekly designed!  It felt like I was in a downtown Japanese restaurant but it was impossible due to the large space — it had to be an uptown thing for a restaurant to occupy that much space.  Our server for the night was so gracious and friendly throughout the whole night.  I could tell that because they were a new restaurant, they really wanted to make sure everything was perfect and that all the guests felt welcome.  I really appreciated that extra touch and purposeful attention to the guest.

Tracy and I ordered several items to share and we covered a lot of ground for two people for dinner!  We ordered the Makunouchi Box, Stuffed Chicken Wing Dumpling, Pressed Sushi, and Black Sesame Tan Tan Noodle.  The server repeated our order to us before she left to put the order to the kitchen. 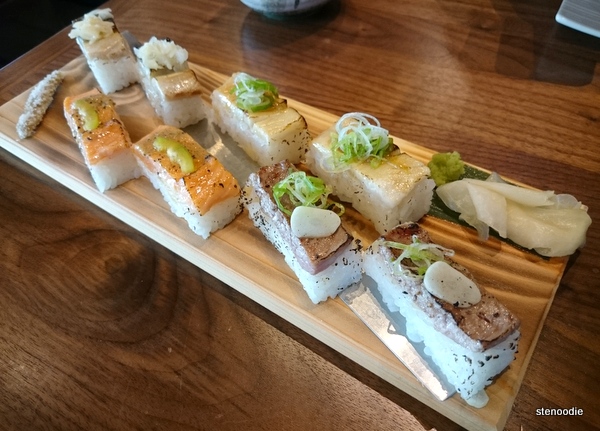 The Pressed Sushi arrived first.  This had 8 pieces of sushi of which there were 4 different kinds.  On our platter that night, there was a mackerel, salmon, Angus beef, and yellowtail.  It looked so great!  Each piece was firmly pressed into a rectangular space with the fish or meat on top of the rice.  There was already soy sauce embedded within the pressed sushi so soy sauce wasn’t provided on the side like it would be for regular sushi.

The Angus beef was so tender and delicious!  I would have thought that putting a slice of Angus beef on a piece of rice would have been difficult to achieve tastiness, but this was so good and had the perfect touch of meat on a sushi.

The yellowtail pressed sushi was lighter in taste than the mackerel but similar in taste.  I enjoyed this one!

The salmon pressed sushi was decent.  Having tried all the other pressed sushi before this one, the salmon tasted tame (even though I did have a piece of ginger between each “course” of sushi).

We gobbled up that platter of Pressed Sushi so quickly!  It was so good. 🙂 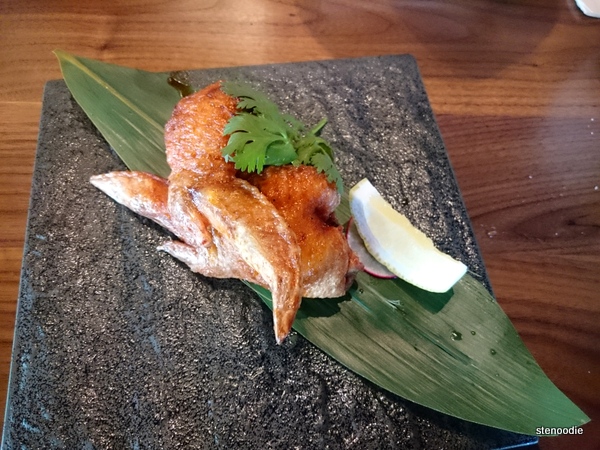 The Stuffed Chicken Wing Dumpling came with two pieces.  This attracted me when I saw that the stuffed chicken wing would be stuffed with minced wagyu beef with pork, shiso, water chestnuts, cabbage, and chives.  The wagyu beef really caught my eye.  It was tossed in a sweet soy sauce and a house blend spice powder.

This ended up tasting more regular than what its description contained.  It tasted just like a dumpling inside of a chicken wing.  The chicken wing itself was good though and the sweet soy sauce was perfect. 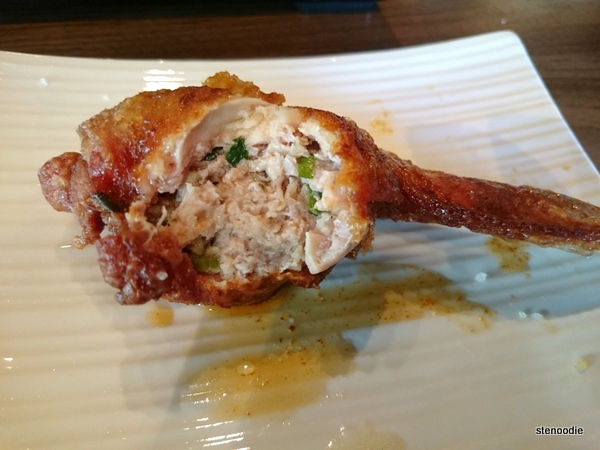 What the Stuffed Chicken Wing Dumpling looks like inside 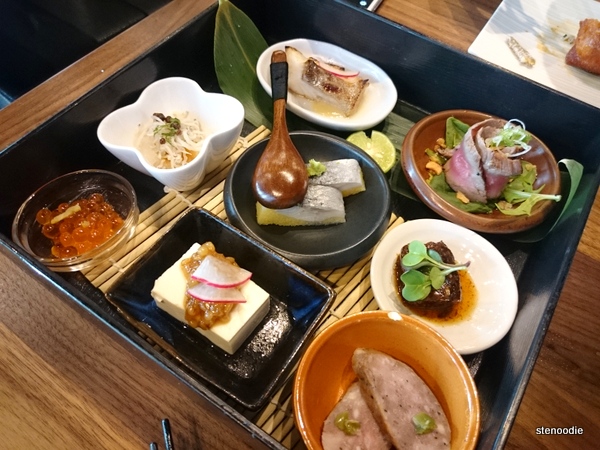 Next up, the Makunouchi Box arrived.  Neither of us had this before and I’m so glad that Tracy chose this for us!  The Makunouchi Box contained 8 chef sampler appetizers which was served in a traditional bento box.  In our box that day — the selection changes seasonally — we had black cod, beef tataki, tuna jelly, sausage, mackerel, anchovies, tofu topped with some kind of bean, and ikura.  It was absolutely a beautiful assortment of appetizers that you wouldn’t normally get to eat. 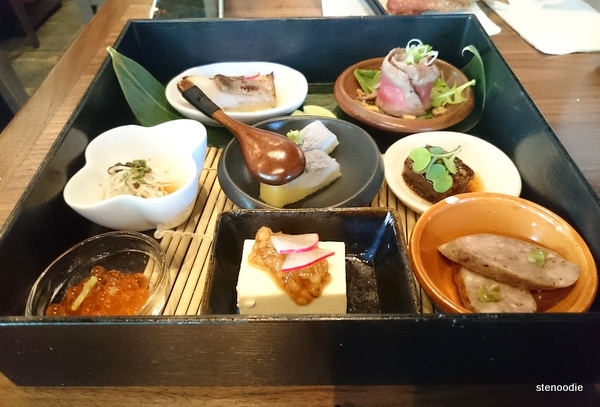 This was such a precious sampler box of goodies! 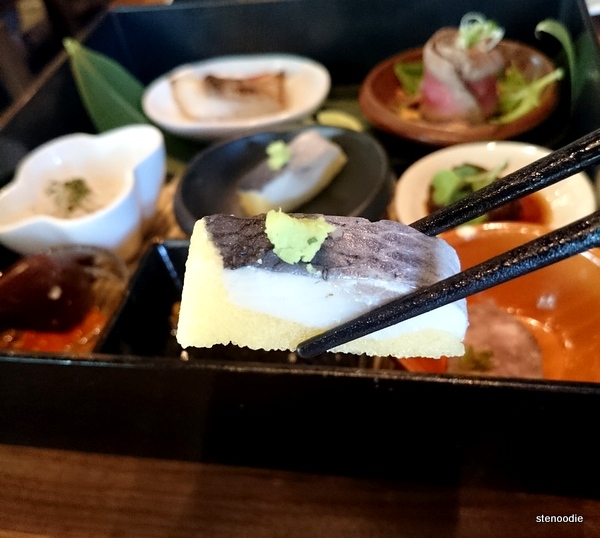 Holding up the delicious mackerel

The black cod was tender and soft.  The beef tataki was raw beef that was seared on the sides and tasted pretty good but it could have been sliced thinner.  The tuna jelly’s texture when broken apart tasted more like salty pork floss to us than tuna — it was interesting; a new item to try.  The sausage was tasty.  The mackerel was so good!  The mackerel had tiny eggs on the underbelly and was so crunchy!  The anchovies were good.  The tofu topped with the beans reminded me of natto beans and was salty but I thought it complimented the bland tofu well.  The ikura tasted fishy but was so good.  I love ikura!  (Especially when it is wrapped up in seaweed and you pop the whole thing in your mouth — that time when I tried it at Yasu has been a wonderful foodie memory.)

I would definitely recommend getting the Makunouchi Box since it was something so different from your ordinary Japanese eats.  I had a great time trying each of the eight appetizers in the bento box! 🙂 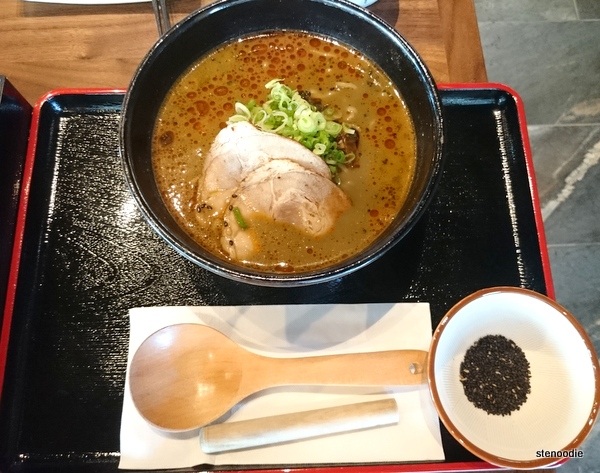 I really liked the thick twisty noodle ramen.  It was just the right texture and tickness for me.  The Black Sesame Tan Tan soup base was very concentrated and rich.  At first, I couldn’t taste the spiciness of the dish, but after a while, it sunk in and I really liked it!  It was just spicy enough to have some heat but definitely not too spicy if you are a huge spice fan.  The pork belly was very thin to the point that it didn’t taste very fatty or pork belly-like. 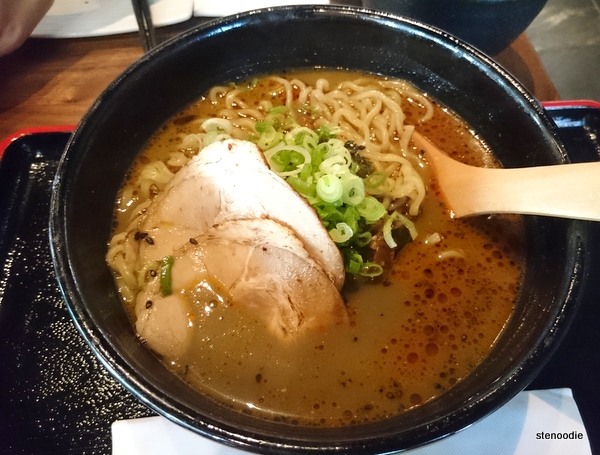 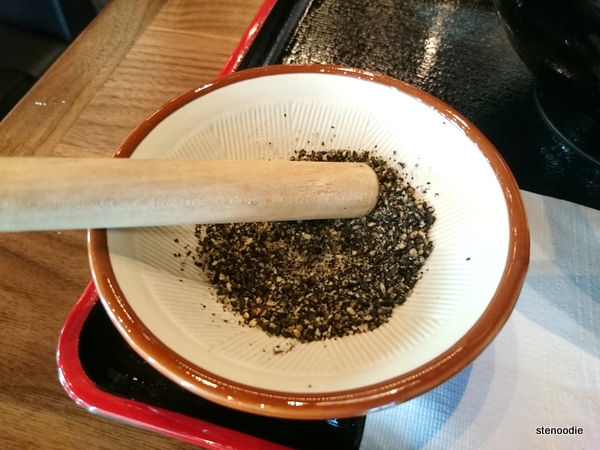 pestle and mortar to grind the black sesame seeds

After grinding up the black sesame seeds and adding it to my bowl, I liked the intensified taste of it added to the bowl of ramen.  All in all, I really liked this Black Sesame Tan Tan Noodle!  I would order it again.

After all of the food was finished, we took a quick look at the dessert menu but decided not to order anything.  Our server was very kind to let us stay a little bit right up to 7:30 p.m. after we had paid the bill and even offered that we could sit at the tea area since we had to return the table for the next party to dine in.  She filled a new cup of water for us too while we sat near the sushi bar to continue chatting for a bit.  That was very nice of her and I really appreciated it.  She could have just told us to return the table and not offer us a table to sit at just for chatting. 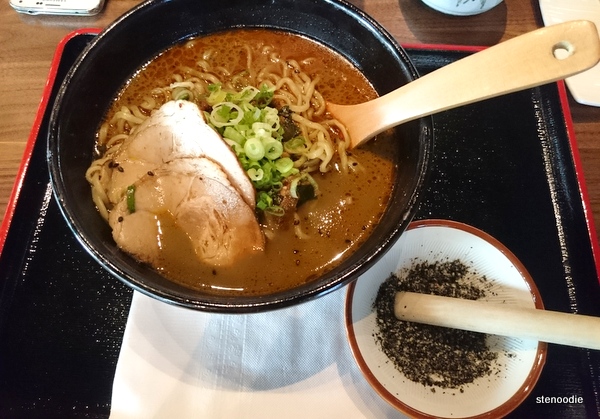 I loved this ramen! 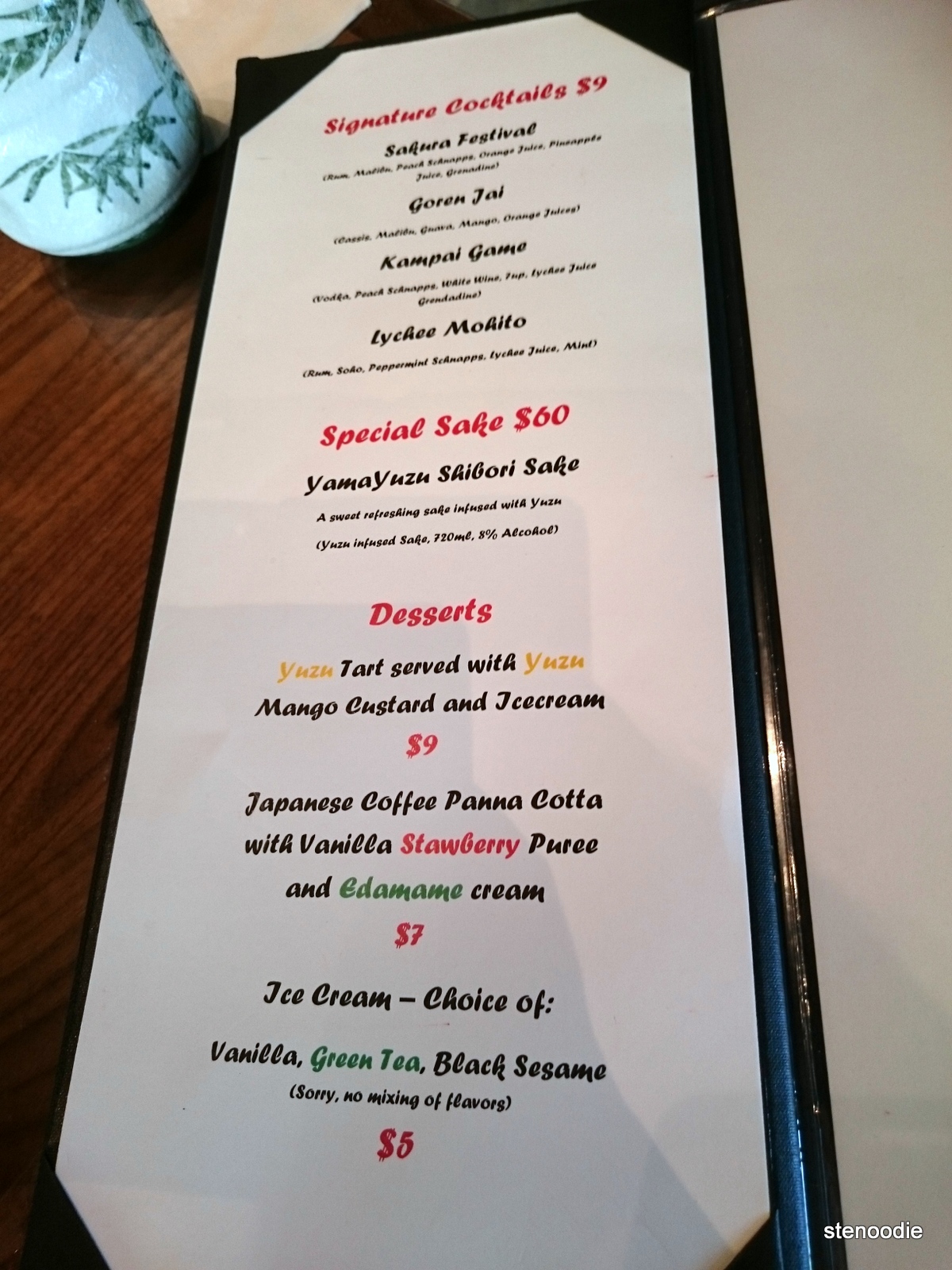 Thanks for reading this super long post.  I really enjoyed my experience at Kiu Japanese Restaurant!  I enjoyed the food and especially the sushi, ramen, and appetizers… which makes it almost everything we had ordered haha.  The atmosphere of the restaurant was very calm, classy, and modern.  I would love to return here for a date or just with friends or family too. 🙂 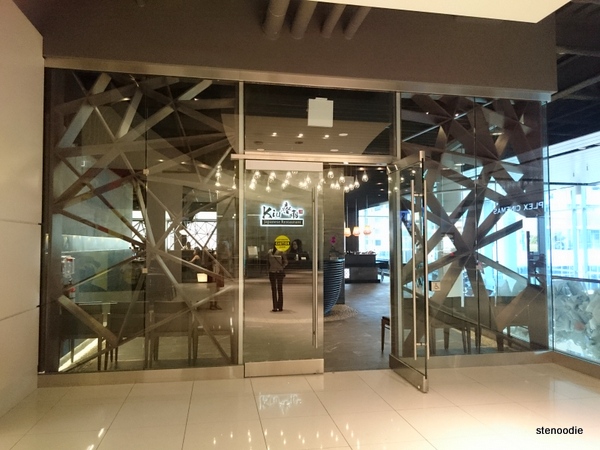 The outside look of Kiu