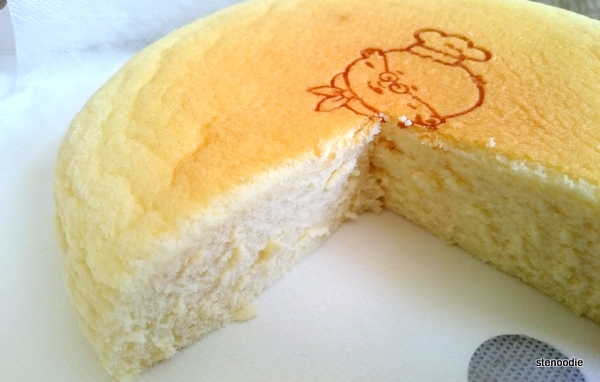 After a nice olive oil tasting event and quick stop at Tsujiri, Betty and I walked over to Uncle Tetsu’s Japanese Cheesecake to see how the line-up fared.  Ever since Uncle Tetsu opened in last year in March, I had been hearing lots about this Japanese cheesecake shop and how there are always, continuously, constantly, and regular long line-ups in which to buy their infamous Japanese cheesecakes.

They only make about a dozen cheesecakes in 15 minutes (depending on if all of them pass their quality test) and thus have the long-standing rule that each customer in line can only buy one cheesecake at a time.  This has caused the line-ups to run from at least an hour to 3 hours or more.  That, my friend, is absolutely crazy!  There  was even a Twitter page updating you on the current line-up wait times.

Thus, because of that and because I am not so crazy about trendy cheesecakes, I had never purposely stopped by Uncle Tetsu’s to queue up for a cheesecake even though I have been super curious about trying these much-talked about Japanese desserts. 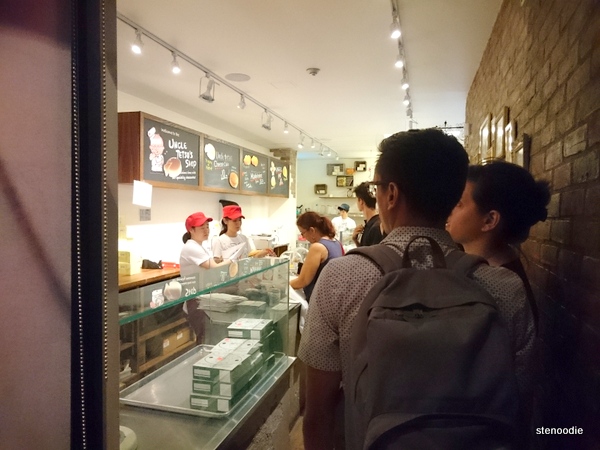 Peeping in around the corner at Uncle Tetsu and seeing no line!

However, since Betty and I were in the area and it was about 9:40 p.m. at night on a Tuesday, we decided to take a look and try our chances.  Lo and behold, as we walked closer to the Uncle Tetsu’s shop, there indeed was barely sign of a line!

Wow!  Yay!  I was so excited!  We simply walked in behind a couple of people and we were right inside the store! I was feeling so happy because I had heard of all these line-ups and that if you go during rainy weather, that was when you would have luck on your side.  It was a beautiful sunny summer night and yet there was no line in sight! 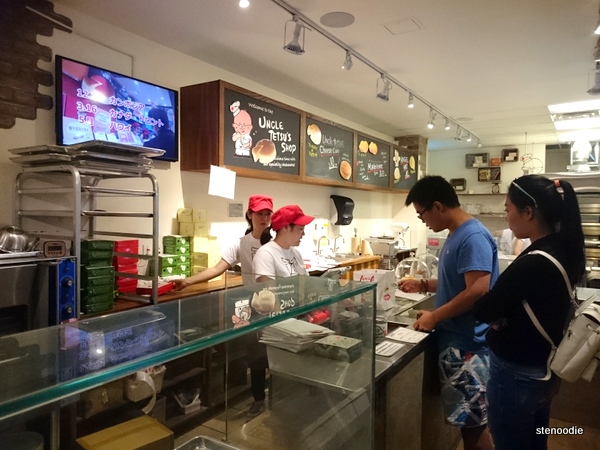 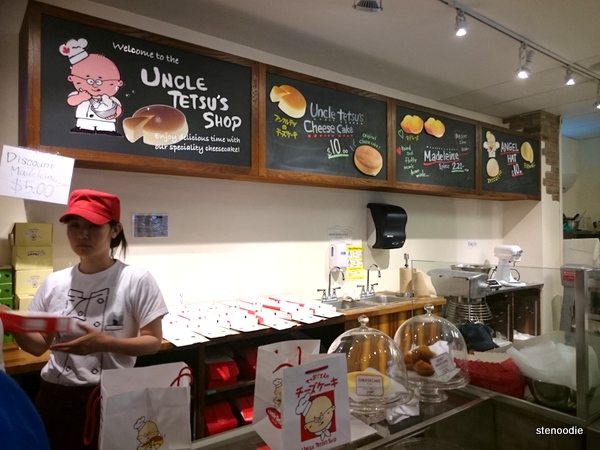 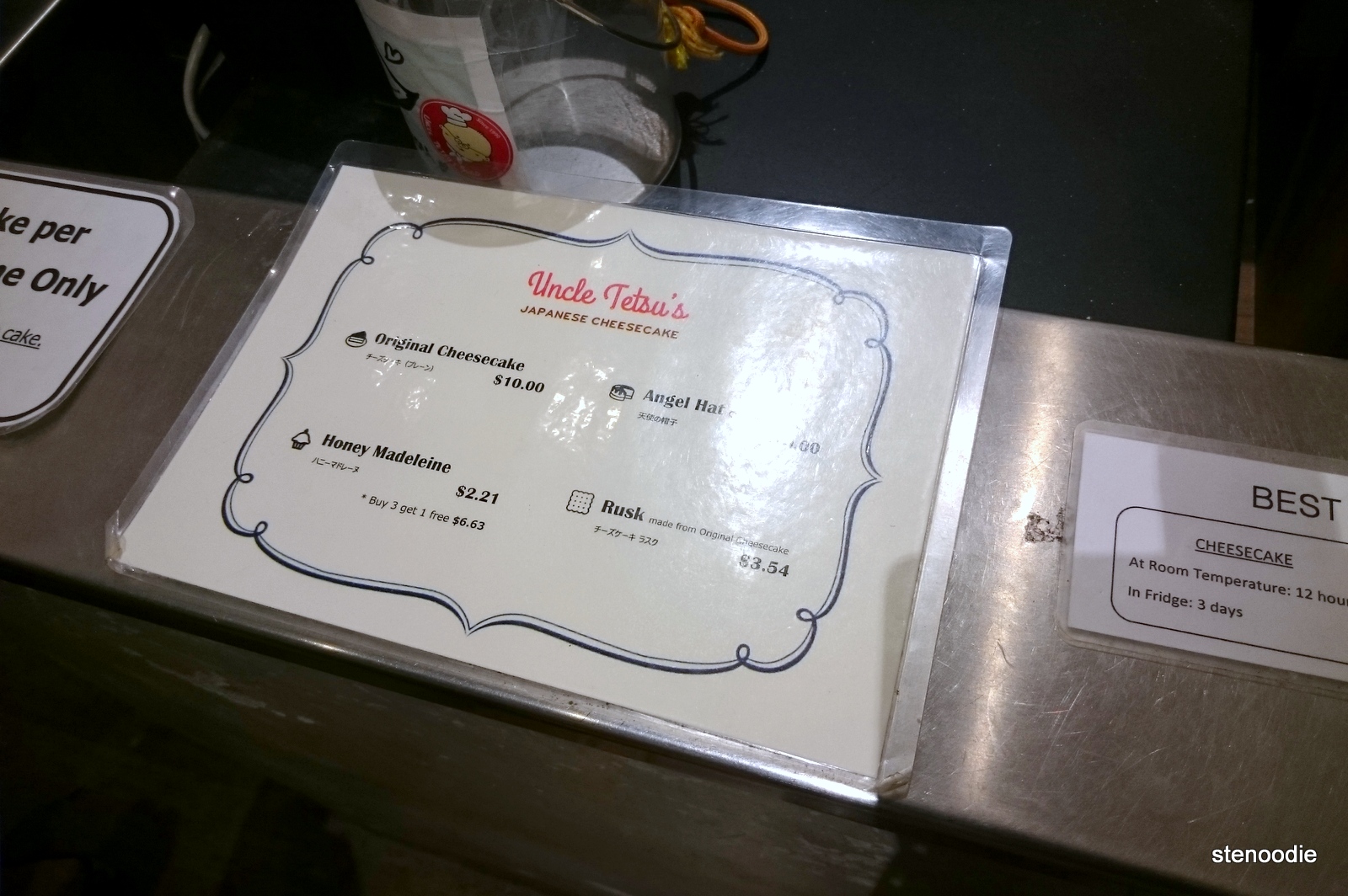 I already knew that I was going to pick up one of their Original Cheesecakes.  One cost $8.88 or a rounded $10 after taxes.  They also had a sign that said that their Honey Madeleines were for sale that night for $5 for one box.  One box contained 4 Honey Madeleines.  Luckily, Betty agreed to split a box with me.  This was a perfect opportunity to try these Honey Madeleines.  As good as something can be, I was content with trying just one (one for me and one for my mom), thus splitting a box of 4 with Betty was such a good idea. 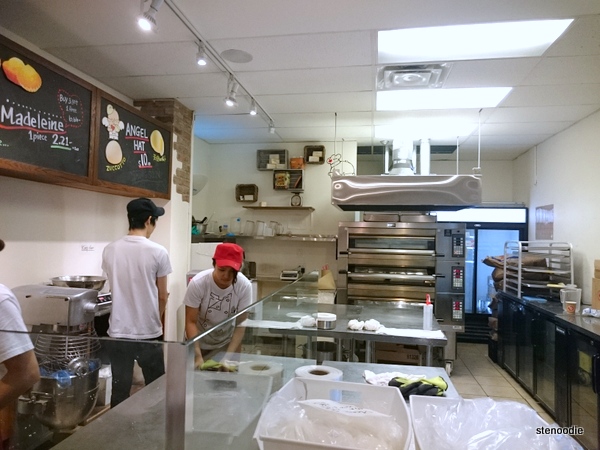 It was very clean inside their kitchen

We paid and then we were out of the store in a flash (after I took some photos of the interior since I knew it would be some time until I was there again or at all).  I was so excited!  That really made the rest of my night because I never expected to be able to nab an Original Cheesecake from Uncle Tetsu without having to wait in line.  I guess timing really is everything. 😉 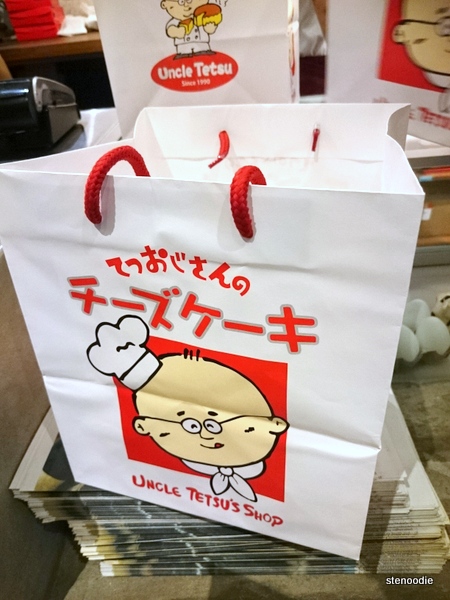 I finally get to nab one of these bags! 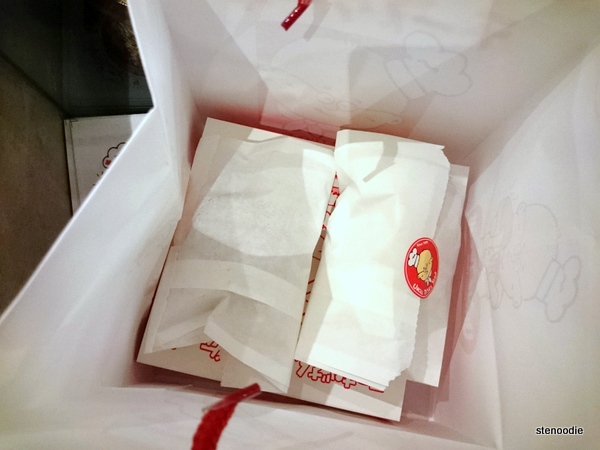 My goodies! One Original cheesecake and 2 Honey Madeleines

Since it was late that night, I didn’t bother trying the cheesecake when I got home.  Instead, I simply put it into the fridge to enjoy the next morning. 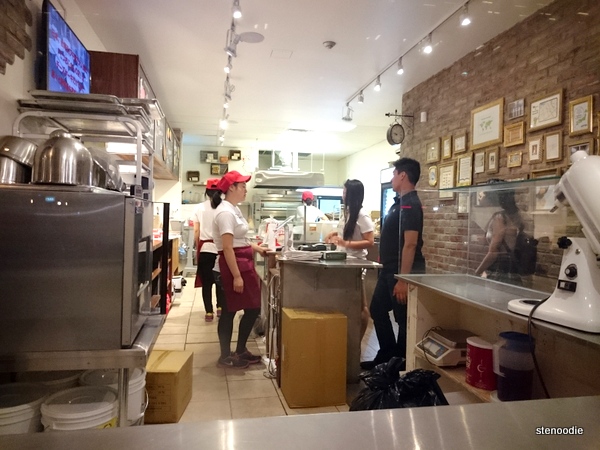 You can watch them make cheesecakes from the outside window 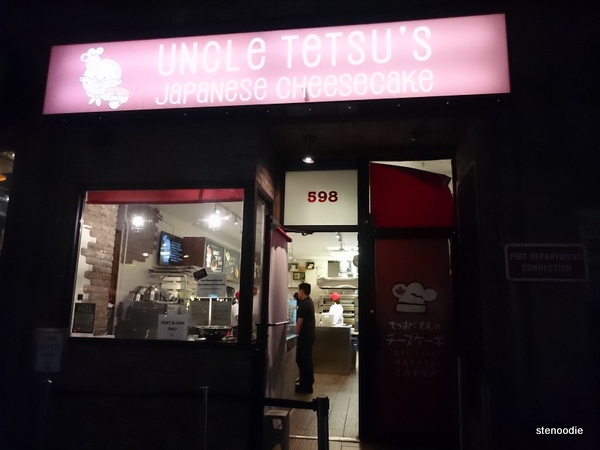 Uncle Tetsu’s Japanese Cheesecake storefront — have you ever seen it this empty? 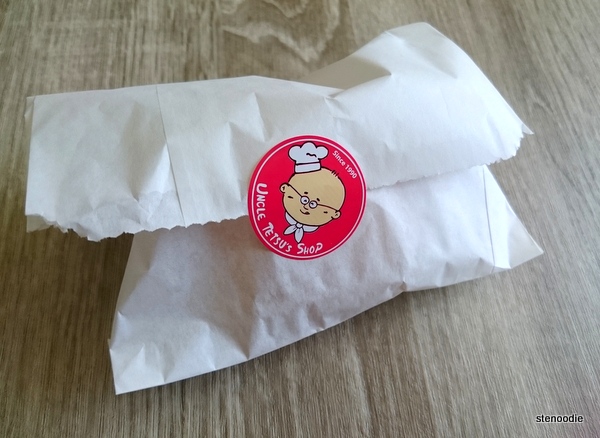 The next morning, I enjoyed the Honey Madeleine first.  It was nicely wrapped up inside a paper bag and I was a little underwhelmed when I saw that it was simply a little cake in a paper wrapping.  It was made with honey but when I ate it, I didn’t really taste the honey much.  It actually reminded me of a denser Chinese sponge cake.  Hmm… 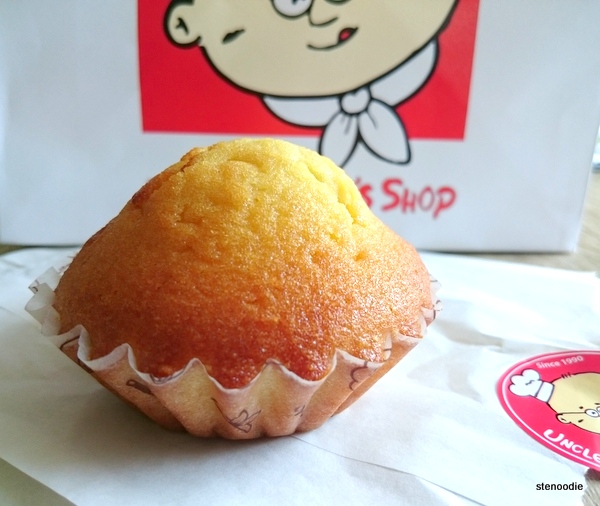 Later that afternoon, I tried the Uncle Tetsu Original Cheesecake.  Ahh!  I was excited.  It was 6 oz of cheesecake and a little on the small size (when you compare it to Western-sized cakes).  It was really soft when cutting it. 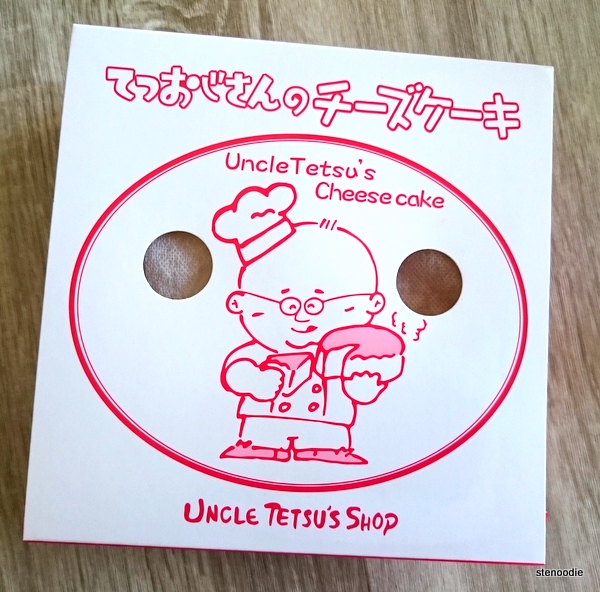 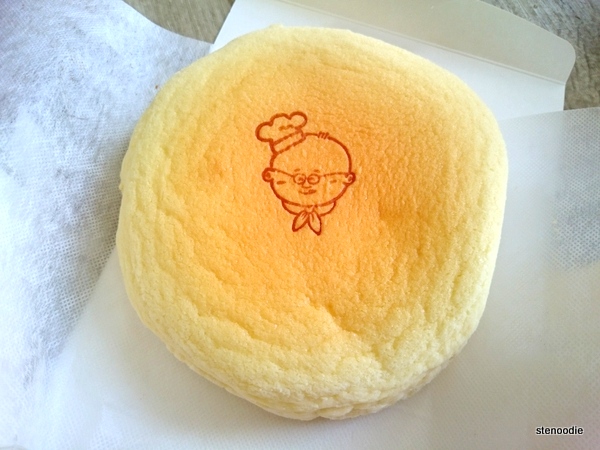 The texture of it when eaten cold is firm and not very cheesy at all.  It was a bit smooth and I could definitely taste the quality in the cake.  However, it wasn’t mind-blowing.

The next time I had the rest of it, I decided to heat it up.  We don’t have a microwave so I put it into the conventional oven for a few minutes.  I actually really enjoyed it hot more than cold.  It was a little crispy on the sides and the inside was very, very soft and fluffy.  Now I could see what people mean when they say that Uncle Tetsu’s cheesecake is very light and fluffy.  The cheese flavour was also much more apparent when it was served hot.  I can just imagine how much better it would taste if it was served right out of the oven.  I really am a big fan of it being served hot – fluffy and tasted like a cloud! 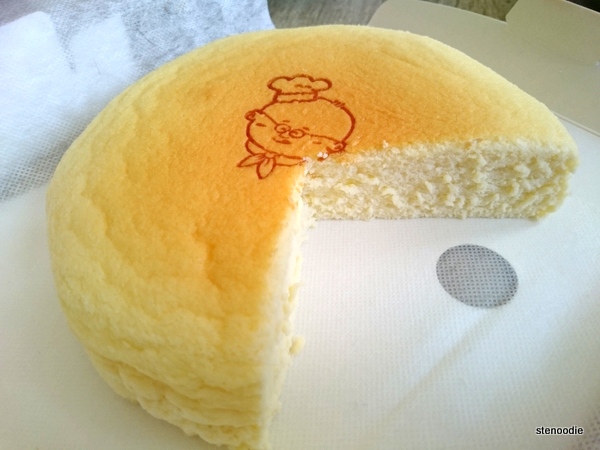 I’m so glad that I got to finally try the cheesecake from Uncle Tetsu!  Now, the next step in this Japanese cheesecake adventure is to try their matcha café and also their Angel Café! 🙂