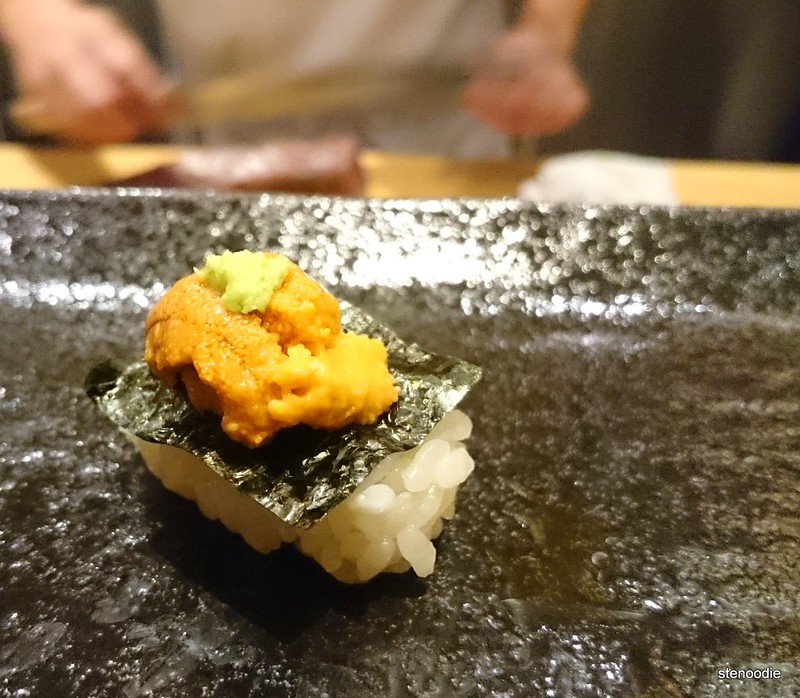 This was my first omakase at a Japanese restaurant!  What an amazing 18-course omakase it was too!  I feel so grateful and privileged that I got this opportunity to try amazing sushi at Yasu in Toronto!  Yay! 😀

Yasu is a top notch sushi restaurant in the heart of Toronto located on Harbord Street near Spadina and the University of Toronto.  I’ve heard about this restaurant that only has 13 seats in the house but never really thought much about it.  When Gladys made reservations and invited me last month, I still didn’t think much about it.

The fateful Saturday night arrived though and we all arrived by 5 p.m. when the reservation was set.  As a matter of fact, three of us were a little late but the time was made up by the sushi chef who was able to expertly prepare the sushi for us in time. 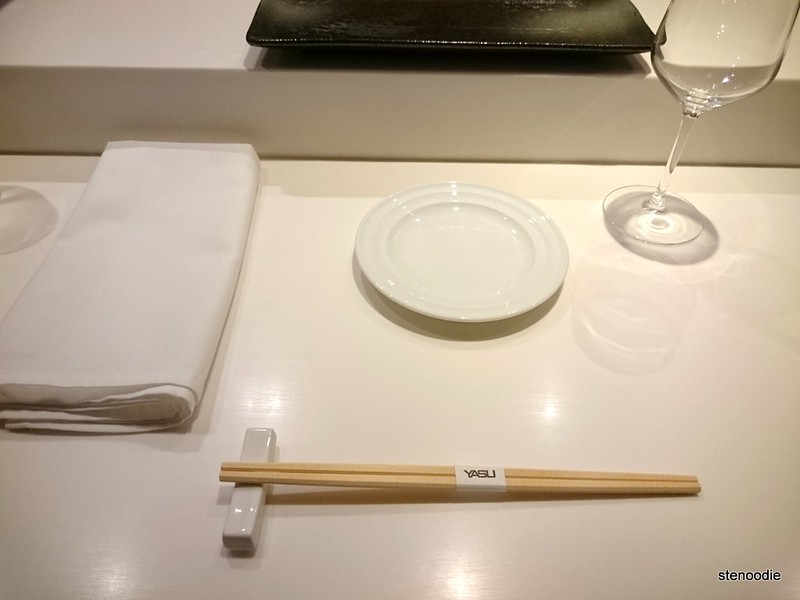 A simple table set up

There are only 11 seats at the sushi bar in this restaurant and two seats at a small table.  The rest of the restaurant space is dedicated to a coat rack and the kitchen.  The restrooms are located straight up the stairs.  It’s a very minimalistic restaurant where the focus is on the seats that face the sushi bar.  What a unique experience this was!

Upon sitting down at the sushi bar, the server asked us about our drink options.  I stuck to hot water as did Gladys.  Both Eric and Steve chose the sake pairing with the omakase.  Throughout the night, our gentleman friends were kind enough to let us sip the sake so that we could also get an experience of the sushi with the Japanese wine. 🙂

The sushi was prepared for us in quick succession.  I am still learning all about sushi and their Japanese names.  The chefs were clearly Japanese and sometimes when he announced the sushi after placing it on the individual dish in front of us, I found it a little difficult to discern what he said.

Nevertheless, I was so thrilled with the night and how it unfolded.  The sushi chef would make the sushi in front of us and then present it on the plate in front of us (which also contained a small mountain of pickled ginger to clear the palate after each course).

It was amazing to be able to sit right in front of the sushi chef and watch him carefully assemble each fish and sushi.  It was clear that he was skilled beyond comprehension and his hands knew exactly what to do with each fish.  There were three chefs and all the seats were filled by eleven people to watch them prepare the sushi.  I think I got a really sweet spot as the sushi chef was right in front of me!  I took a lot of pictures.

Each sushi was so fresh and “freshly sliced and placed atop warm, loose rice then brushed with a touch of nikiri soy for a perfectly balanced bite”.

Here is the order of the sushi that we had the pleasure of trying that night: 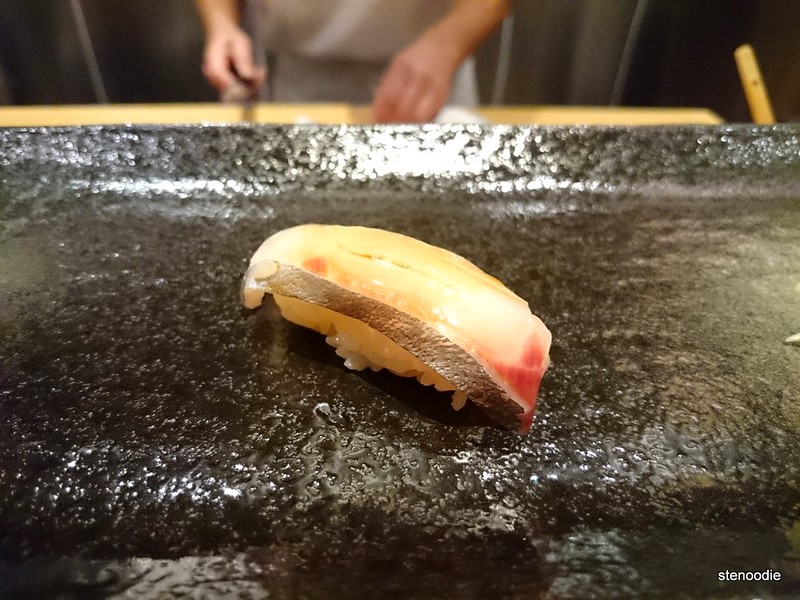 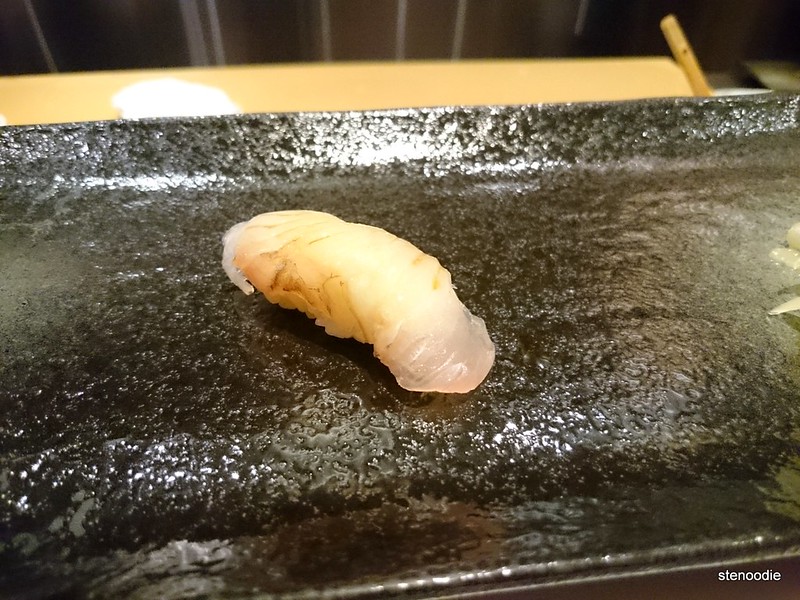 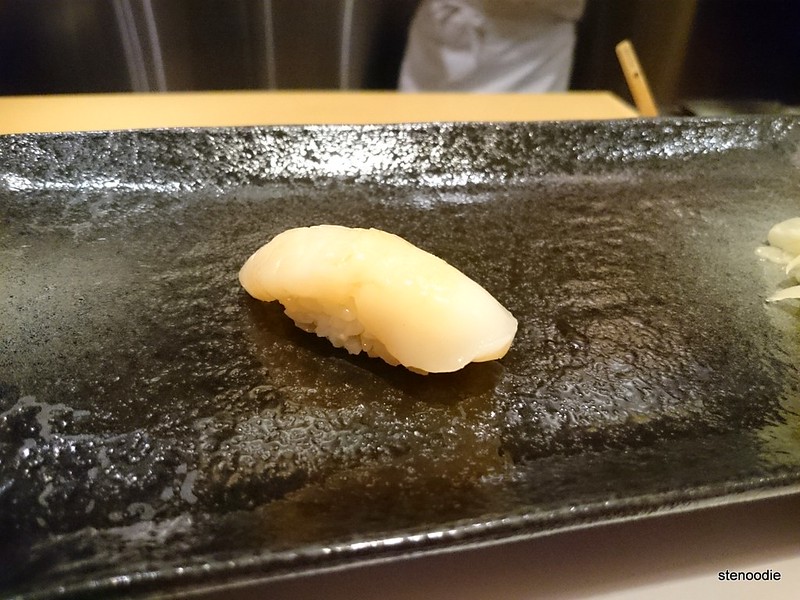 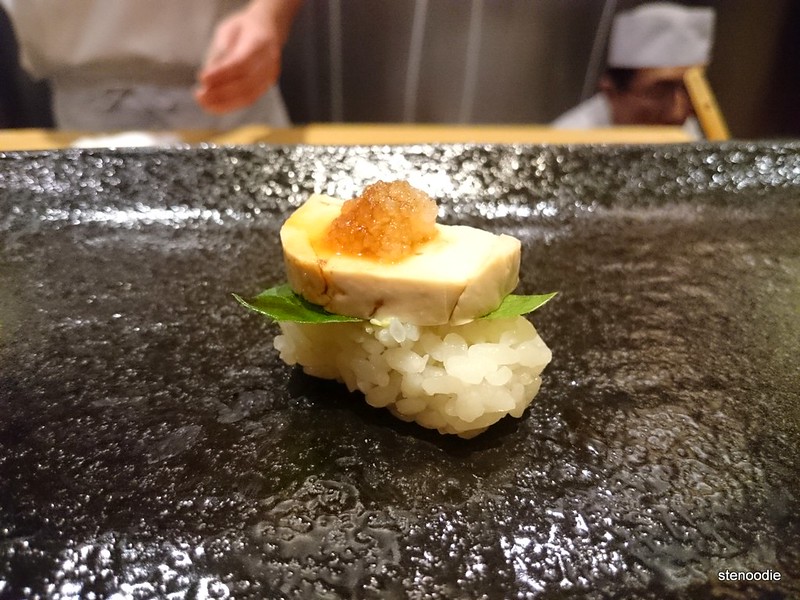 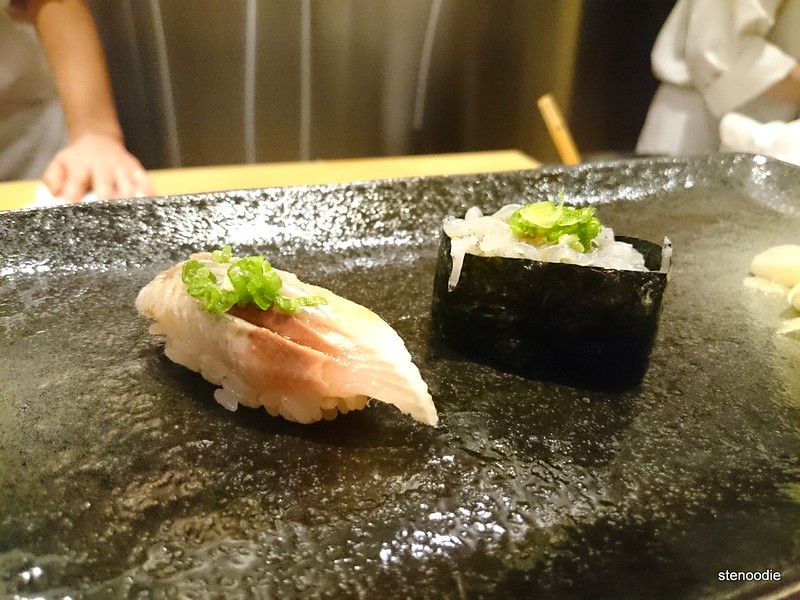 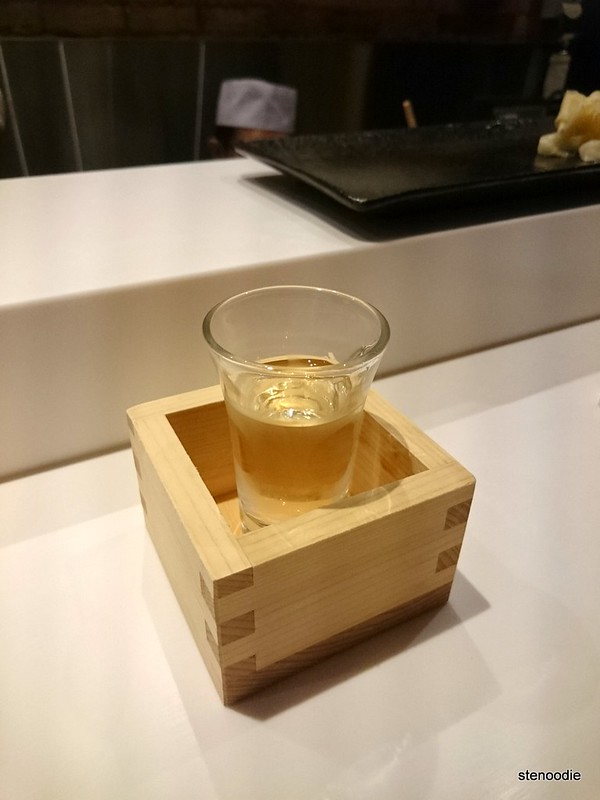 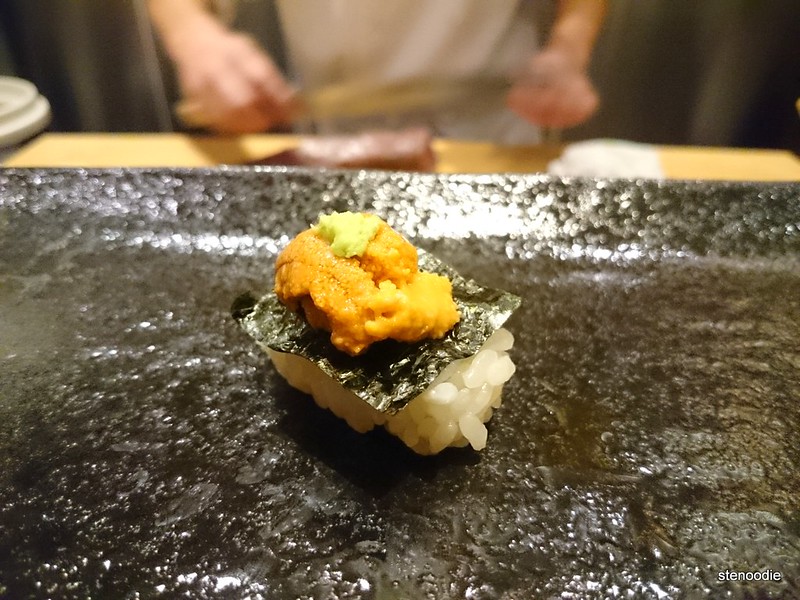 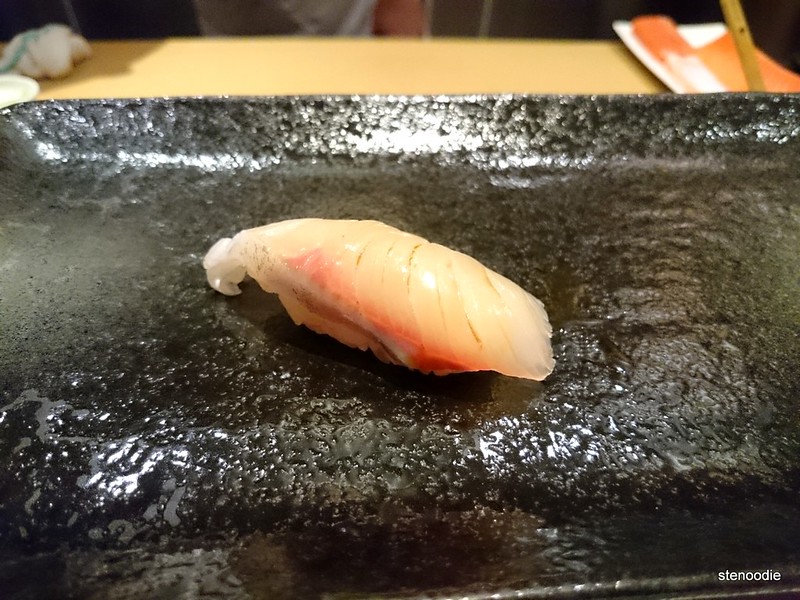 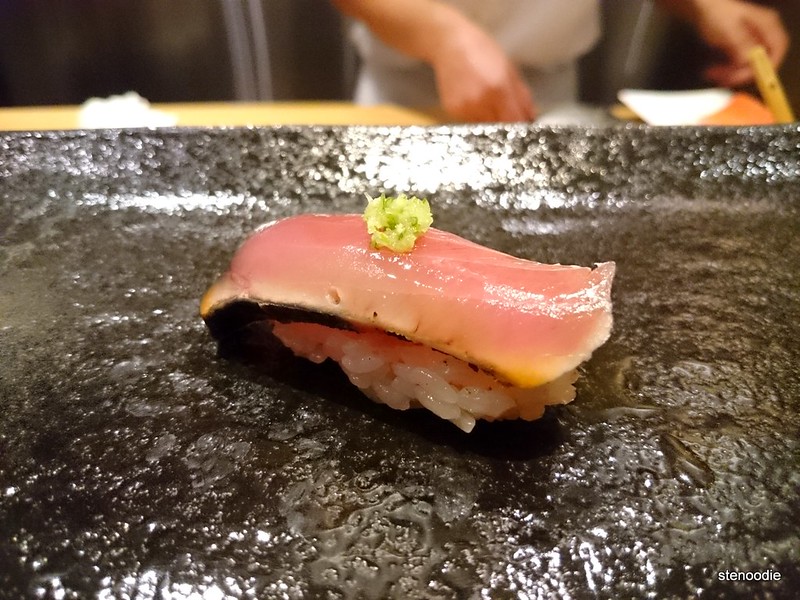 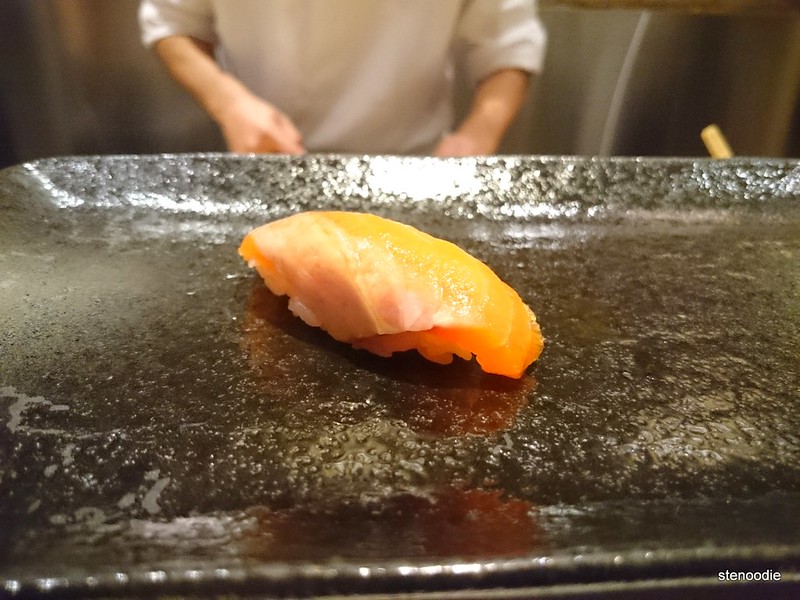 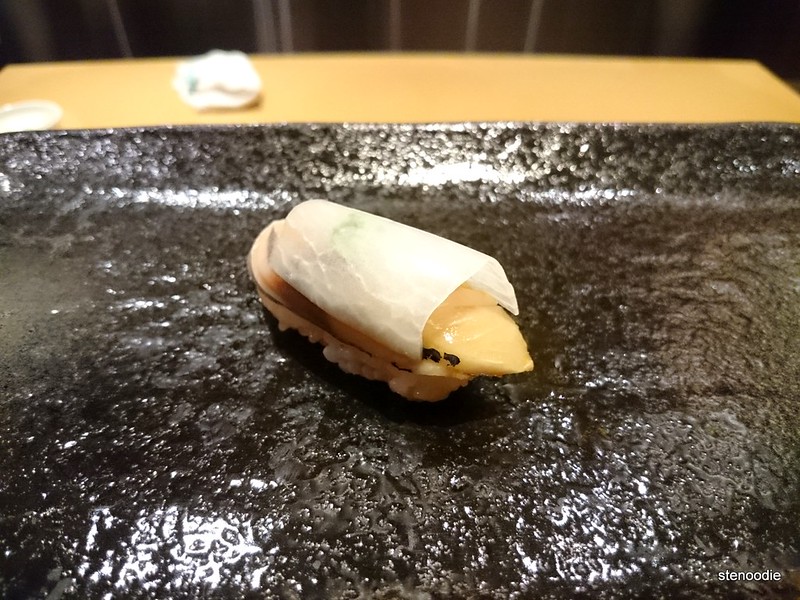 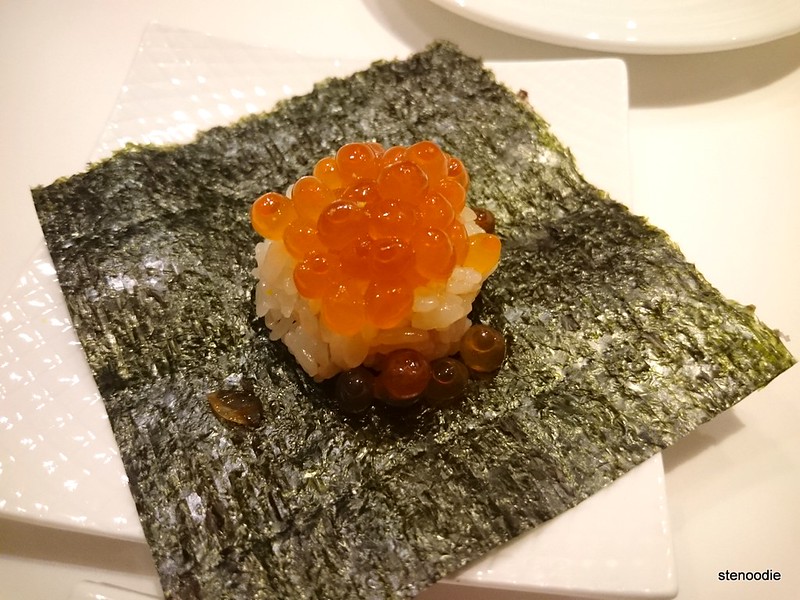 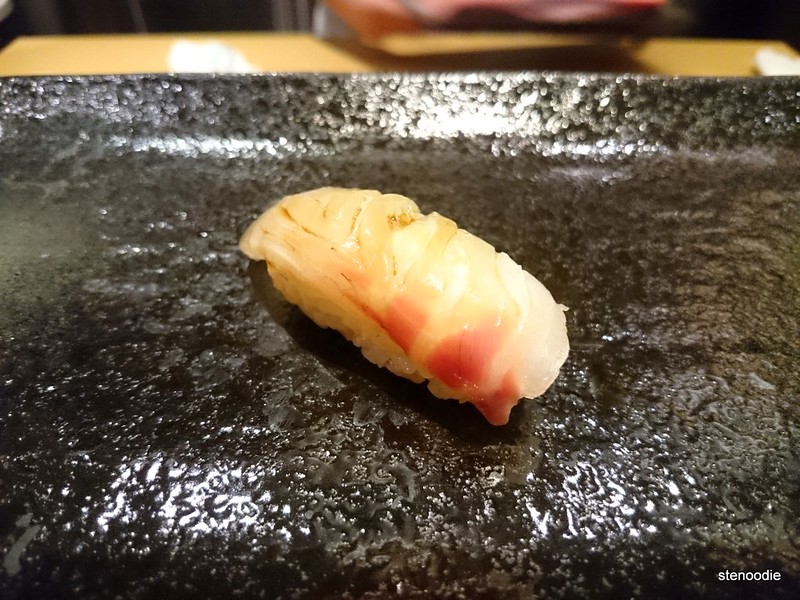 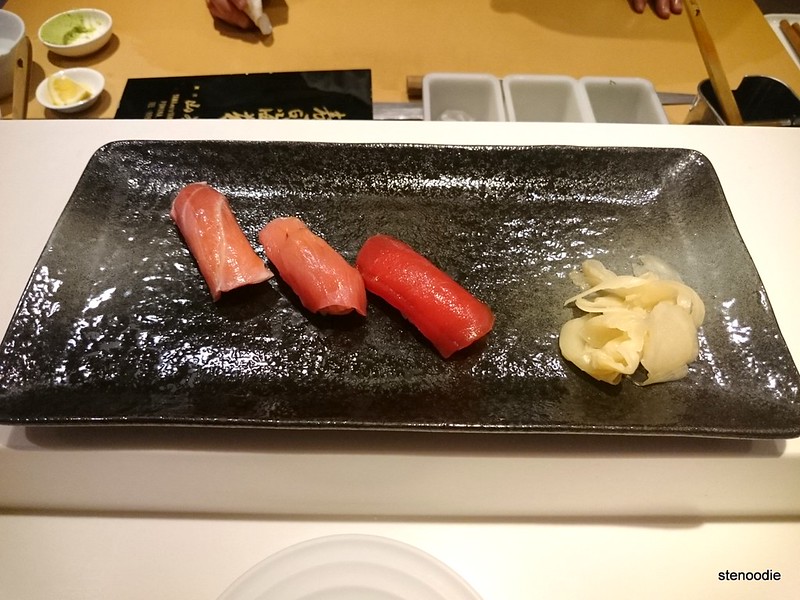 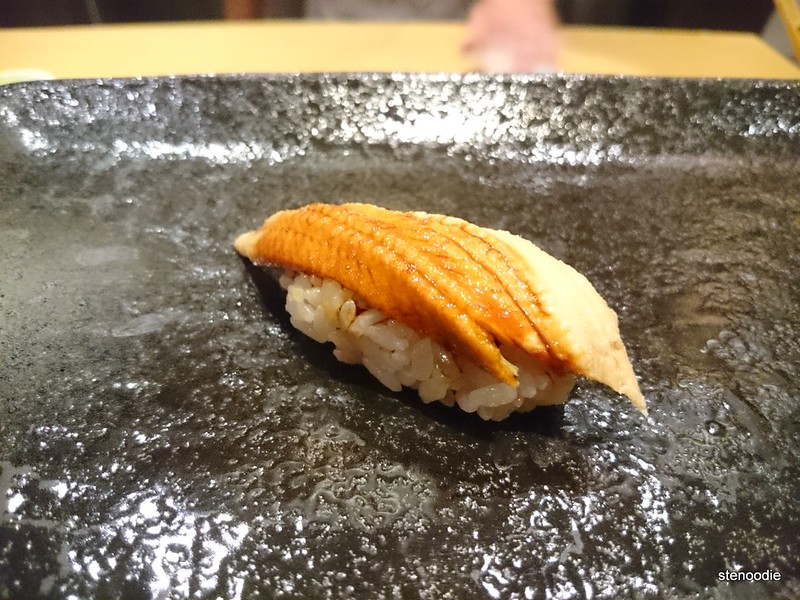 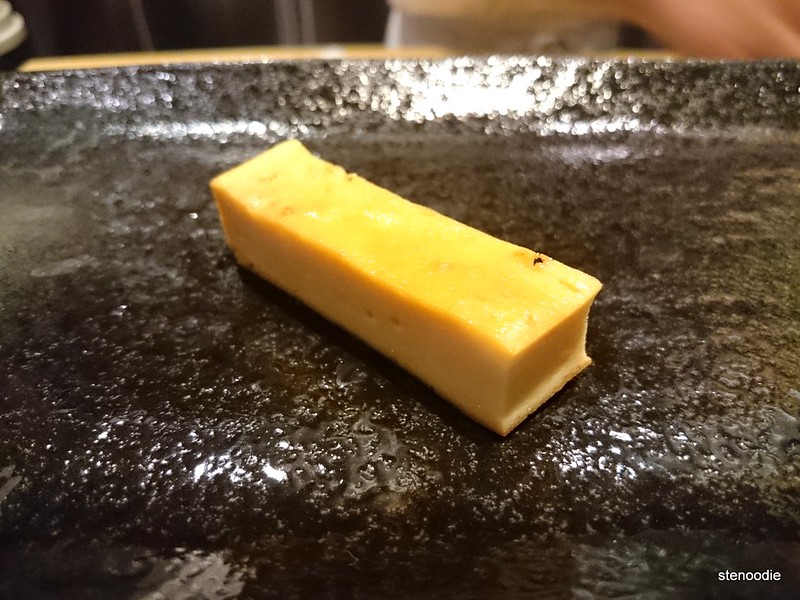 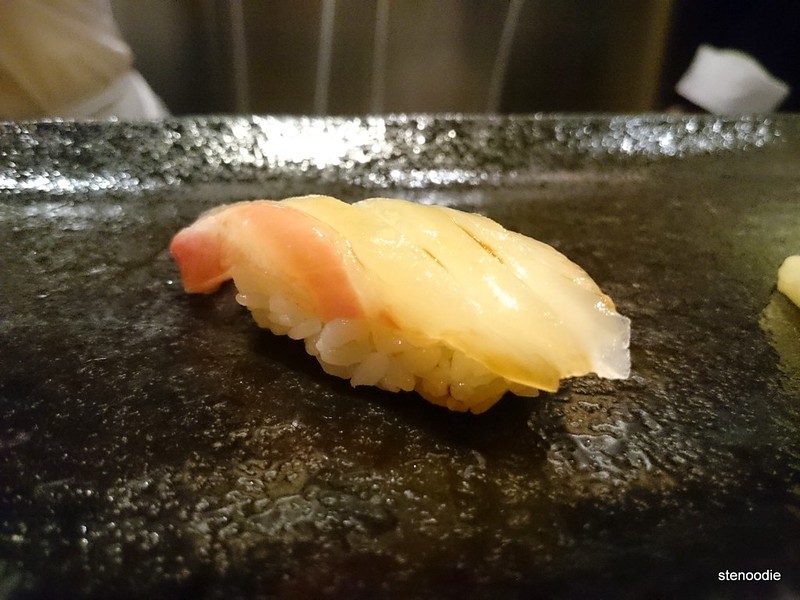 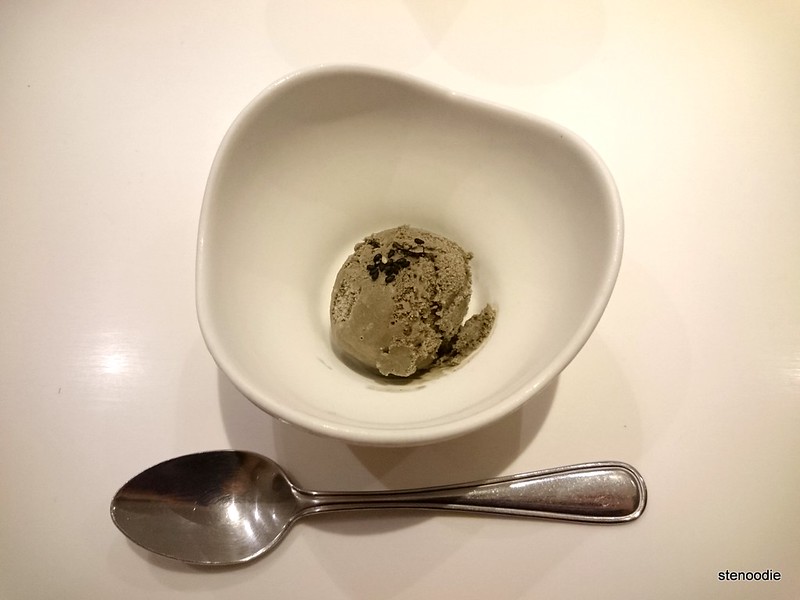 My favourite of the night was the sea urchin.  The uni was so unbelievably fresh and melted in my mouth when I ate it.  I absolutely love uni and this place does it perfectly! ❤  I also really enjoyed the salmon roe.  When they gave it to you, it’s on a separate plate unlike the other sushi where the chef places it on to your individual plate.  You wrap up the salmon roe with the piece of seaweed and eat it all in one bite (the server also told us that everything should be eaten in one bite that night).  The way the individual salmon roe pops and explodes in your mouth with the rice is unbelievable.  Actually, all of the rice in each sushi portion was measured perfectly so you didn’t feel like you were eating too much rice and that the seafood balanced out with the rice perfectly.  The key word of the night would be “perfect”, I believe, haha.

After all the 18 courses were over, the chef asked us how everything was and if we wanted to try anything else.  Gladys was smart to know that in most omakases, the last piece is actually complimentary, so we asked for the Red Snapper.  Everyone really enjoyed the Red Snapper!  I actually didn’t know this about omakases. 🙂

The omakase lasted two hours until 7 p.m. and they had just enough time to prepare until their next seating at 7:30 p.m.  So efficient! 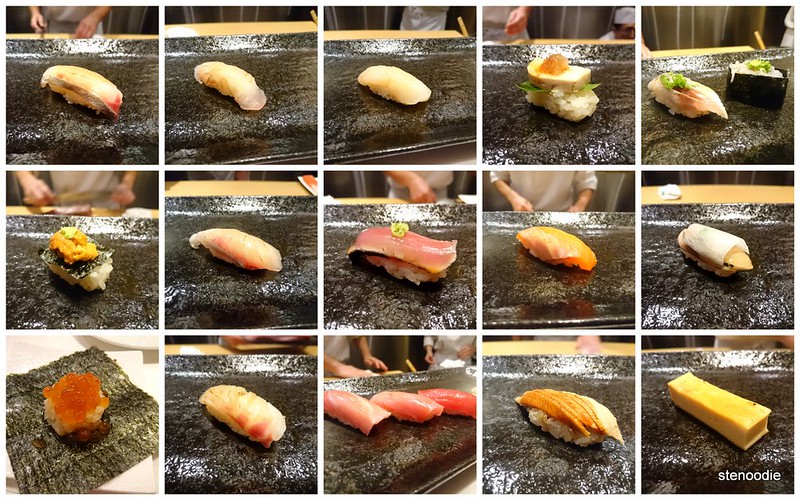 The entire 18-course omakase we had 🙂

As you can tell from my review, I absolutely loved every minute of my first omakase experience.  It was truly so unique the way that you get to watch every piece of sushi being made in front of you by an experienced chef and have an incredible experience enjoying the sushi in each course as well.  The unbelievable quality and freshness of the fish cannot be beat.  After the experience, I said to myself, “how can I go to any other Japanese restaurant in Toronto now for sushi?” The quality just won’t be the same!  Nevertheless, I now know more about fresh sushi and what authentic omakase is like.  I can’t wait for my next one!  As a matter of fact, Yasu is a restaurant I would probably love coming back to again and again to try the chef’s selection.  It is a tad pricey at $80 a person, but that’s because you’re pretty much renting out the entire restaurant when you go with your friends and take one of their 13 seats and enjoying top notch seafood.  It’s definitely a one-of-o-kind experience and that’s what tickles me the most! ^_^ 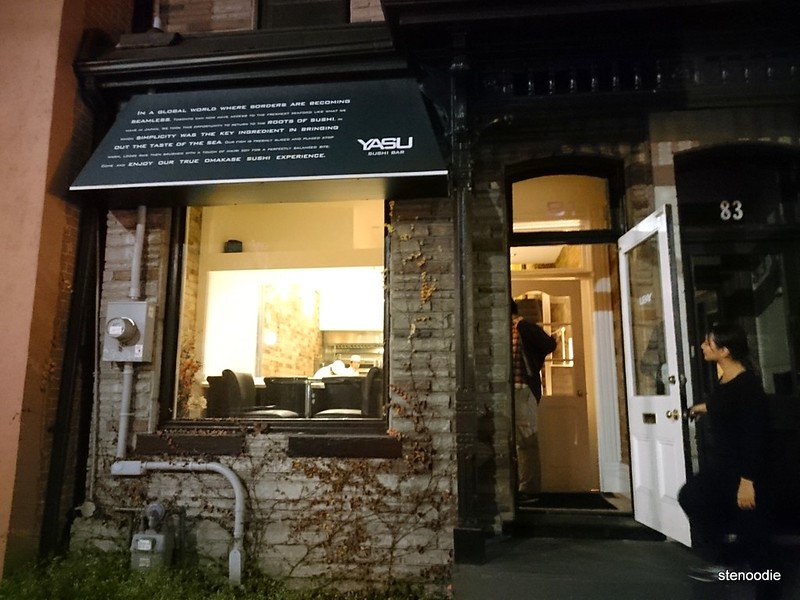 It was so sweet that when we paid and left, one of the staff opened the door for us

2 Responses to 18-Course Omakase at Yasu!