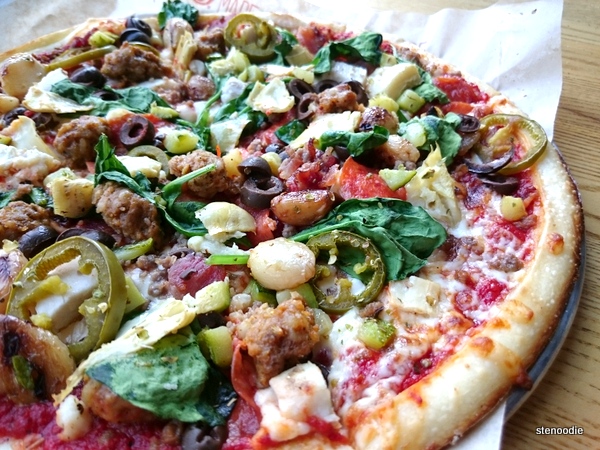 Grace and I tried out Blaze Pizza this past week!  I had heard lots about this U.S. chain pizza (which BlogTO likes to refer to as the “Chipotle of pizza“) and I was super excited to try this much-talked about pizza franchise for the first time.

Blaze Pizza has numerous location franchises all over the states already and I believe this was their first location in Toronto, Canada.  Blaze Pizza prides itself on fast, healthy pizza that is fired up in just 180 seconds.  You can either choose one of the signature pizzas that they already have on their menu or you can build your own!  I found the build-your-own concept to be immensely attractive and appealing.  I wanted to build my own pizza too for just a set price!  That meant that no matter how many toppings you added to your pizza, it was just one price.  I was so excited to try it out!! 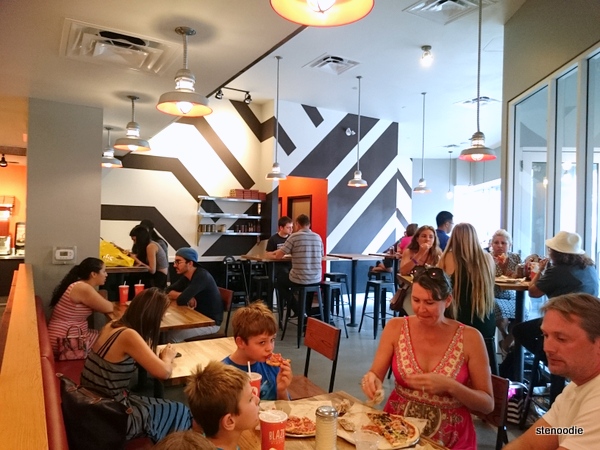 The inside of Blaze Pizza

When we walked into the store located on Dundas Street East, just across from the famous Dundas Square, I was drawn into the spaciousness and brightness of the store.  It operated like a fast casual restaurant where you placed your order at the counter, chose your toppings for your pizza, paid for your order, and then waited for it to be done.  Once done, you could either take out your pizza to go or choose a table to dine in.  There were a fair number of people here when we arrived at around 6:30 p.m. on a Thursday evening but I knew that we would still be able to get a seat at a table once we had received our pizzas.

Once at the counter, I got the Build-your-own pizza!  The first lady at the counter wrote my name on a sheet of parchment (which served as the serving paper for the pizza) and I followed along the assembly line of two other staff to make my pizza. 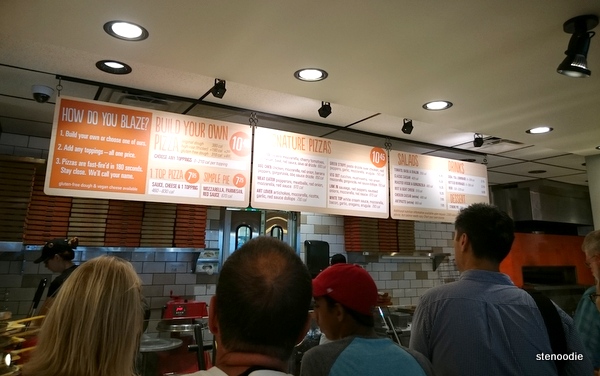 Lining-up for the pizza assembly line 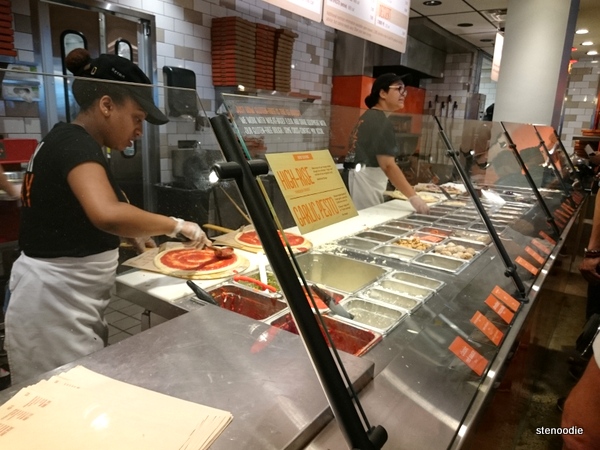 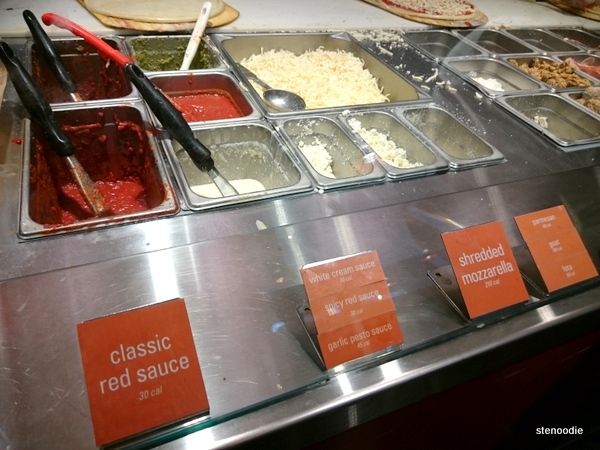 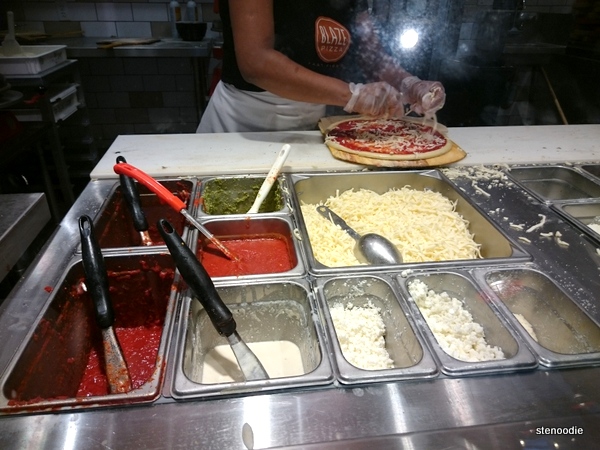 What kind of cheese do you like on your pizza? 🙂

The second stop was to choose the cheese.  I chose the mozzarella (classic pizza gooey cheese for that stringy action when you pull apart the pizza) plus some parmesan because I couldn’t resist getting the choice to add anything I wanted to on my pizza.  The other choices included goat, gorgonzola, ovalini mozzarella, ricotta, and vegan cheese.)

The third stop was the meats.  Like the previous stops, there were so many selections here (c’mon, it’s the meats section!).  This included selections like applewood bacon, crumbled meatballs, grilled chicken, Italian sausage, pepperoni, salami, and smoked ham. 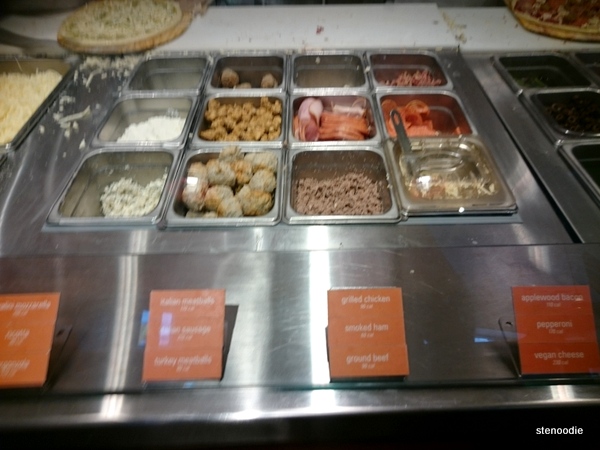 Meats selection on your pizza! 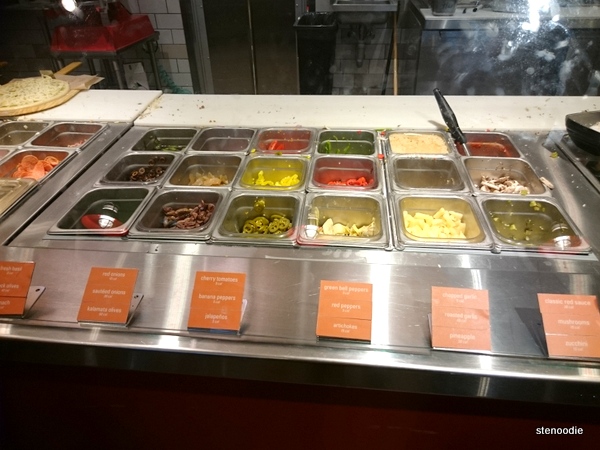 So many awesome vegetables to add onto the pizza!

The last stop before the pizza went into the grill to be fired up was the veggies section.  To my delight, there were a ton of choices here.  I couldn’t choose everything fast enough since I didn’t want to hold up the line either.  The selections included artichokes, arugula, banana peppers, bell peppers, cherry tomatoes, chopped garlic, fresh basil, jalapeños, mushrooms, olives, pineapple, red onions, red peppers, sautéed onion, spinach, and zucchini.

(Oh, also, before the pizza went into the oven, you can choose sea salt or oregano as the final, final addition.) 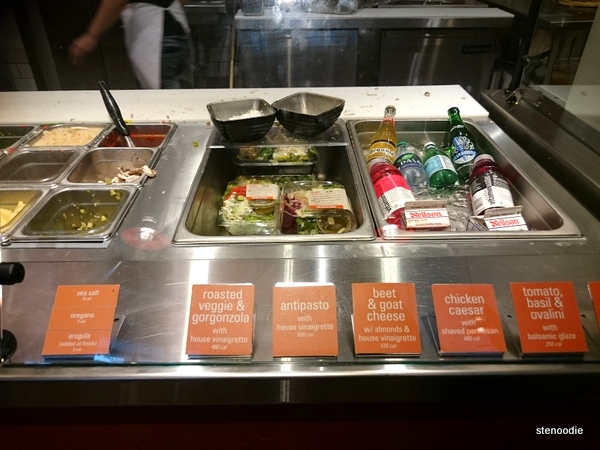 What an amazing line-up of toppings I had on my pizza!  Imagine if every pizza I ordered had all these toppings, I would be broke!  (Haha.)  Luckily, that’s the prime draw of Blaze Pizza’s Build-your-own pizza where anything you chose to put on your pizza was just $10.45.  Thus, in my mind, the more I put on, the better the deal I got.  Asian-shopping mentality. 😛 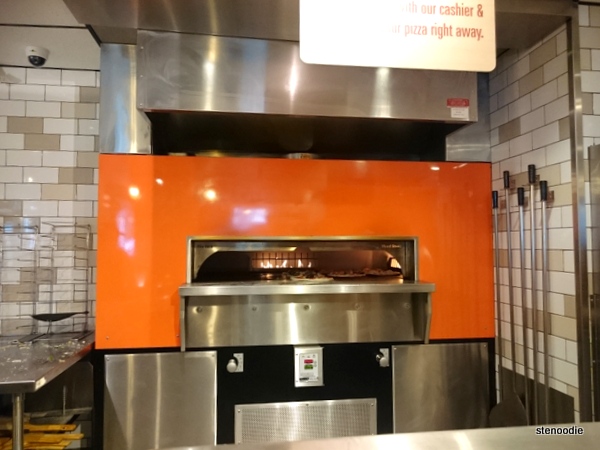 Pizza oven where pizzas get made in just 180 seconds!

I paid for my pizza and then waited in line as I saw my pizza enter the hot grill.  I thought that their system of keeping track of which pizza was whose was smart.  They put a metal “clip” with a number on it to track each pizza so that the pizzas don’t go to the wrong person.  Once the pizza was done, they placed it back on the original paper order sheet and called the person’s name to deliver it. 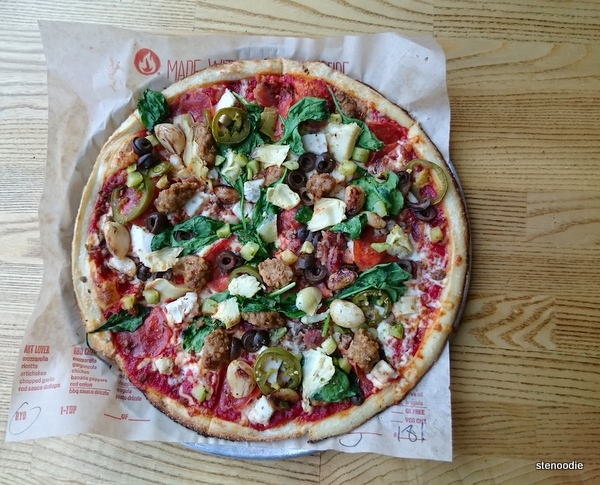 My Build-your-own pizza fresh out of the oven!

The “180 seconds” of firing up the pizza in the grill felt like a longer time to me than just 3 minutes.  Or maybe I was just impatient haha. 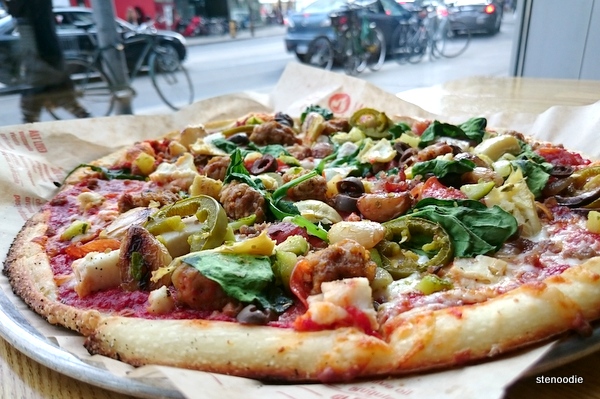 When I received my pizza fresh out of the grill, I was so excited!  Since we were dining in, mine was placed on a metal tray and we sat down at an open table to enjoy it.

I was so impressed with this pizza chain.  I absolutely loved the idea of getting to eat a pizza that I completely designed and customized by myself.  Not only that, but it was all for just one set price!  So awesome!

After taking numerous photos of my pizza from various angles, it was time to dig in.  Mmm, I really indulged and enjoyed my pizza.  It was savory and had all the toppings I loved to eat. 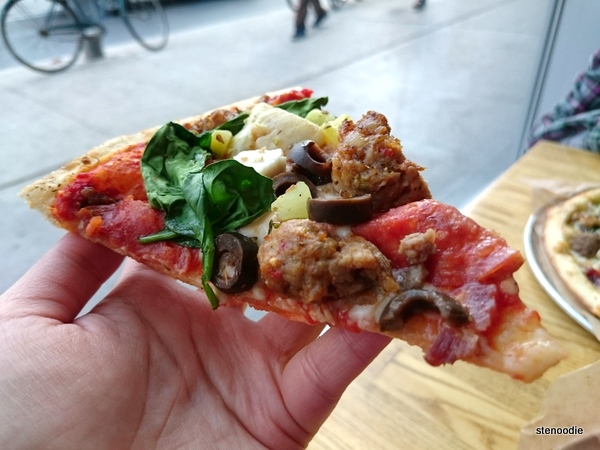 I tried a slice from the one that Grace made too and enjoyed it as well since hers was made with a garlic pesto sauce. 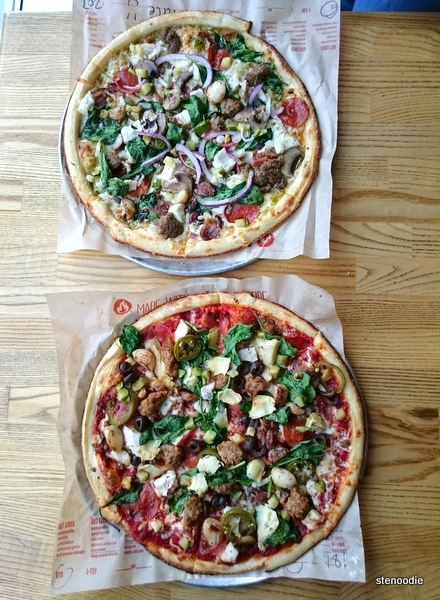 When I was down to the last two slices, I decided to pack it home to enjoy.  I’d rather eat less and settle for having eaten “enough” than stuff myself these days.  Plus, I get to enjoy it at another meal later on.

I loved the geniusness of having these half-sized boxes for their customers to take home leftover pizza too.  So I knew I wasn’t the only one who didn’t finish a whole pizza, haha. 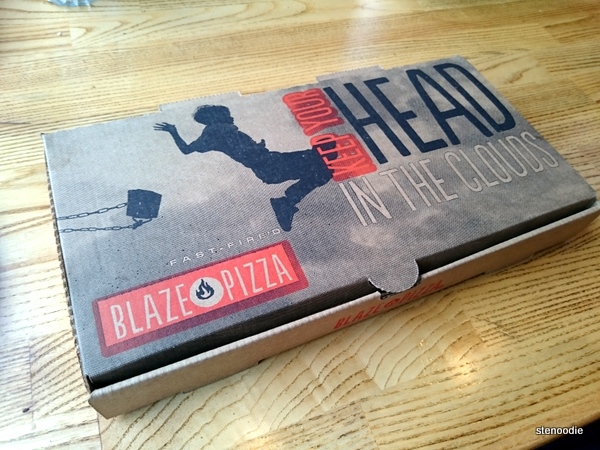 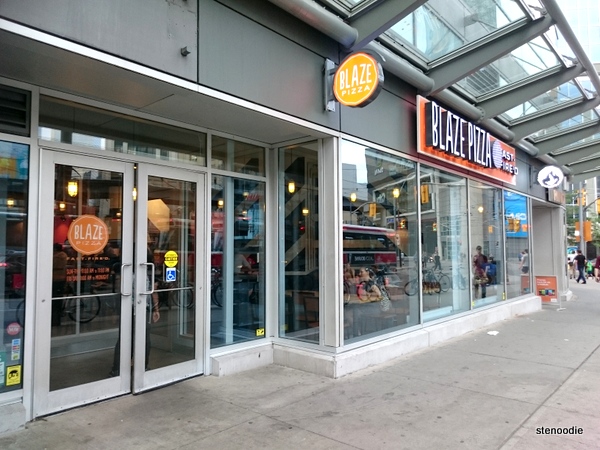 Will I be back to Blaze Pizza?  Heck, yes!  I love the experience of customizing my own pizza.  The next time I am here, my pizza will be made with different toppings, and I love that kind of thing.  Fun + delicious = wins my books every time.

I'm a stenographer, foodie, avid traveller, and new mom who loves to share her experiences with the world.
View all posts by stenoodie →
This entry was posted in Food and tagged 10 Dundas St E #124, Blaze Pizza, Blaze Pizza reviews, Build-your-own Pizza Blaze Pizza, downtown pizza restaurants, Fast-Fire'd, food blog, foodie, make your own pizza, put as many toppings on your pizza as you want for a set price, restaurant review, Toronto, unlimited pizza toppings. Bookmark the permalink.