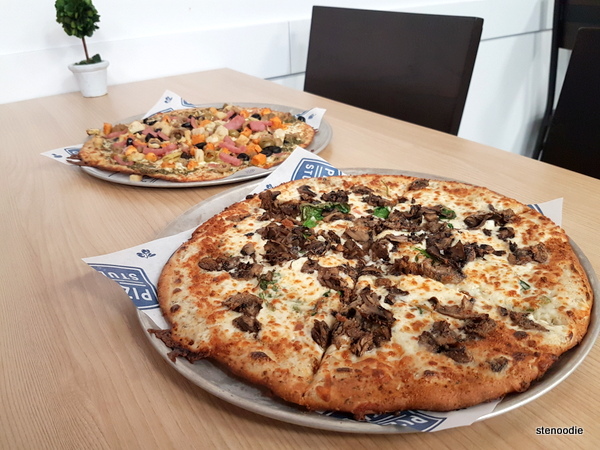 April 20, 2019:  Markham now has a fast casual pizza joint where you can customize unlimited toppings on a choice of five crusts!  Downtown Toronto has plenty of these pizza joints like Blaze Pizza, Pi Co, and Za Pizza Bistro, so it’s great to see a similar concept uptown.

Pizza Studio is a franchise with three other locations across the Greater Toronto Area and across Canada too.  I hadn’t heard about this build-your-own pizza franchise until I saw it as one of the new restaurants at Woodbine and Highway 7.   I also noticed that they initially had a buy one get one promotion after 7 p.m. but recently, they have changed it to buy one get the second half off after 7 p.m. instead (if my memory is correct). 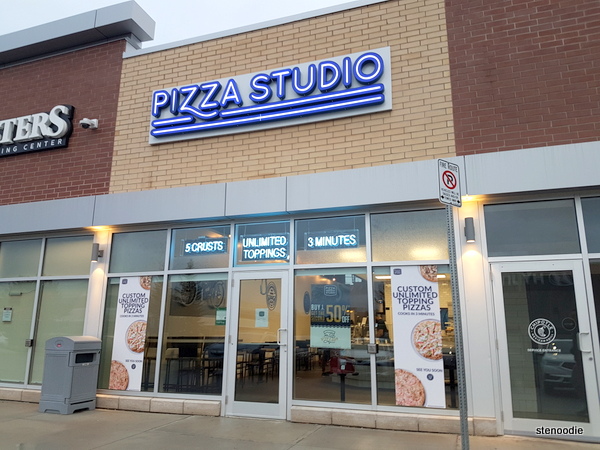 Located in the new plaza on Woodbine north of Highway 7

We walked in at 7:45 p.m. on a Saturday evening and the place was rather quiet.  Seeing as we had been to other build-your-own pizza parlours before, we knew what to expect.  If you don’t want to build your own pizza, their menu has six “Chef’s Favorites” pizzas with pre-selected ingredients.  They also have Create Your Own salads and desserts (“fillookies” and brownies). 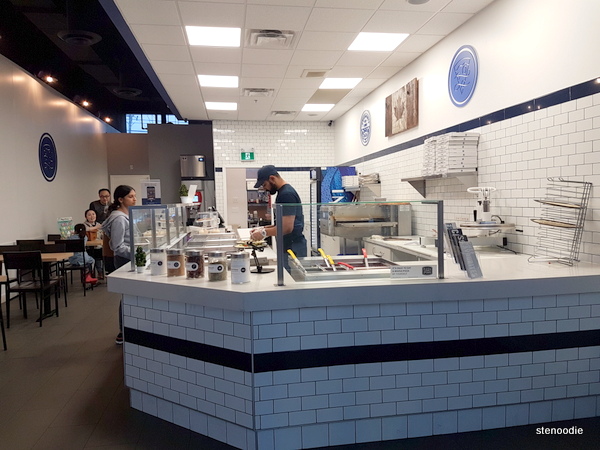 We ordered one Chef’s Favorite pizza, the Truffled Mushroom, and a Create Your Own pizza on a Flax Seed whole grain crust.  You can also choose from “Gluten Free” (tapioca based),  “Firecracker” (cayenne pepper), “Rosemary” (fresh herb), or “Traditional” (original recipe) crusts.

Create Your Own or Chef Favorites 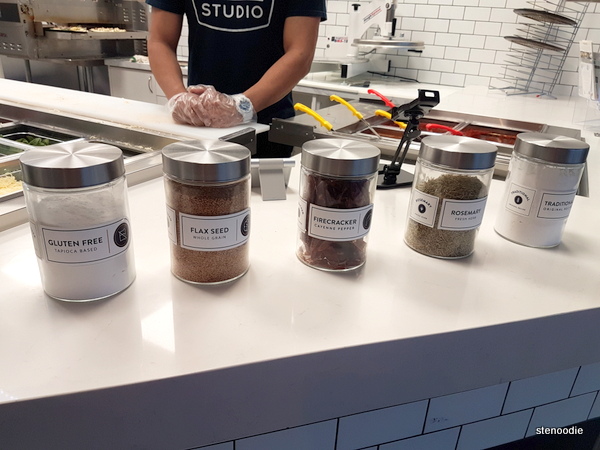 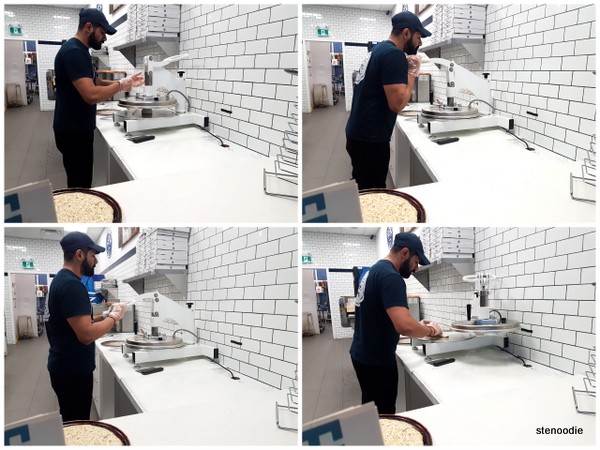 After the pizza passed through the conveyor belt oven, it was ready on the other side ready to be picked up by the staff to be cut and served. It was so simple and foolproof (unlike other pizza places where the pizza is manually placed into a wood-fired oven and needs to be rotated, for instance).

(Also, what is it with restaurants not labelling the ingredients in the trays?  Please consider putting labels on your toppings so that your guests know what each item is.) 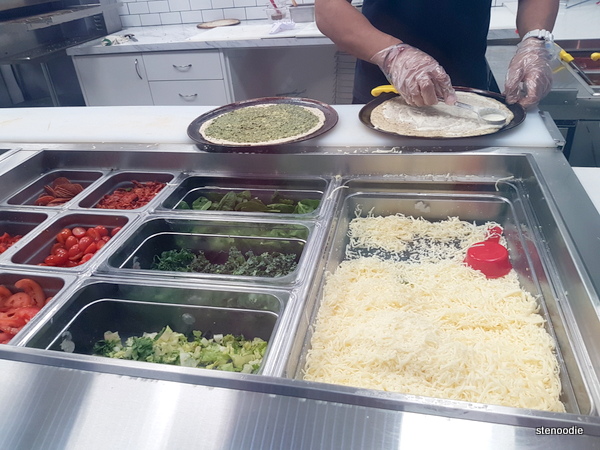 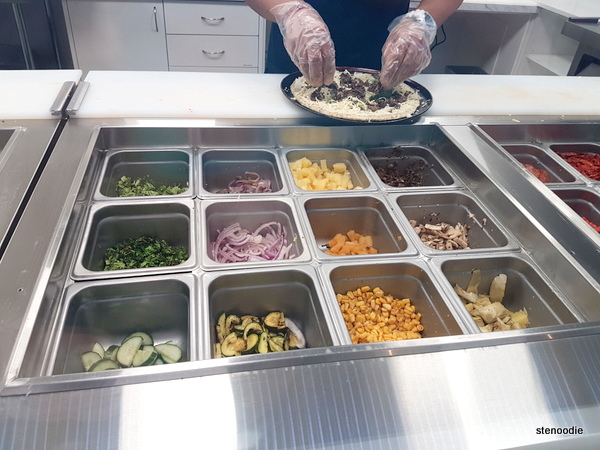 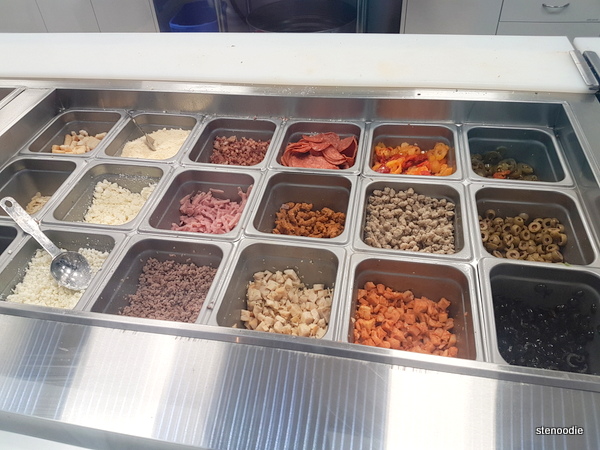 Toppings — cheese and meats and olives 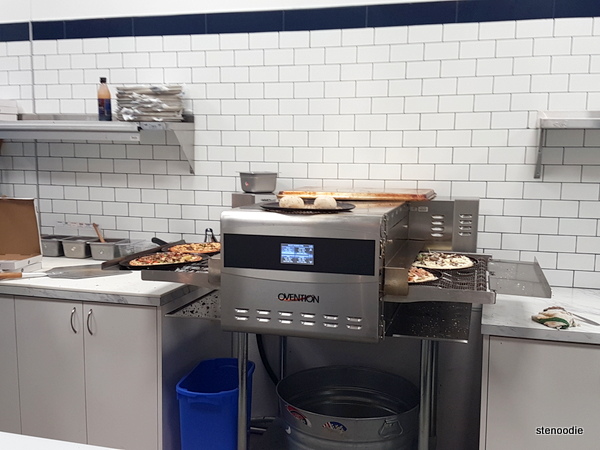 Since all the meats were pre-cooked already, the 3-minute oven simply reheats everything up.

We dined in that evening (lots of other customers who arrived after us had take-out orders).  I’m not sure what was wrong, but the restaurant was extremely stuffy and warm.  Good thing it wasn’t the middle of summer otherwise we wouldn’t have been able to dine in at all; it was just too hot.

On the Create Your Own pizza, we had a Flax Seed crust, pesto base, mushrooms, mozzarella, buffalo chicken, regular chicken, Italian sausage, ham, green olives, black olives, and artichokes.  It was loaded with all of the toppings and tasted good as well.

The size of the pizzas were smaller than I expected (all of the pizzas are 10-inch).  I believe the pizzas I’ve had at other places (like at Blaze Pizza) were much bigger in size.  The crusts on the pizzas here though were very thin and crispy, which was still good.  And because the surface of the pizza is so small, the volume of ingredients on the pizza makes it seem like there’s a lot of it. 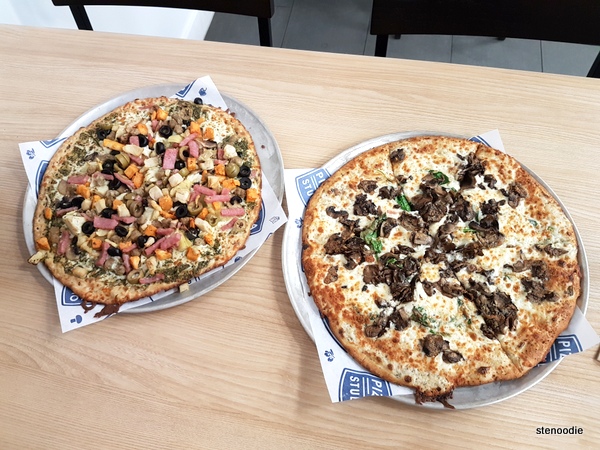 A Truffled Mushroom Pizza and a Create Your Own Pizza 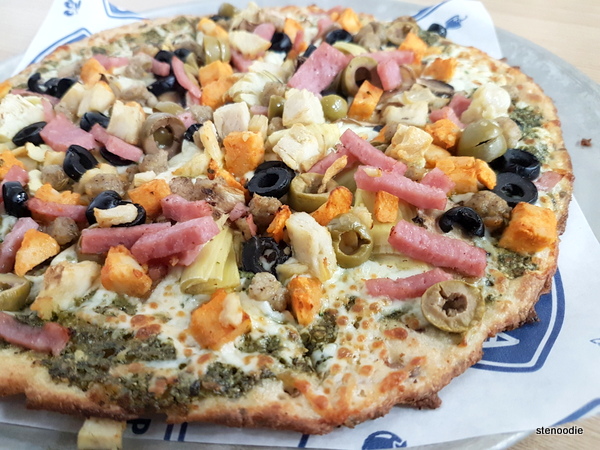 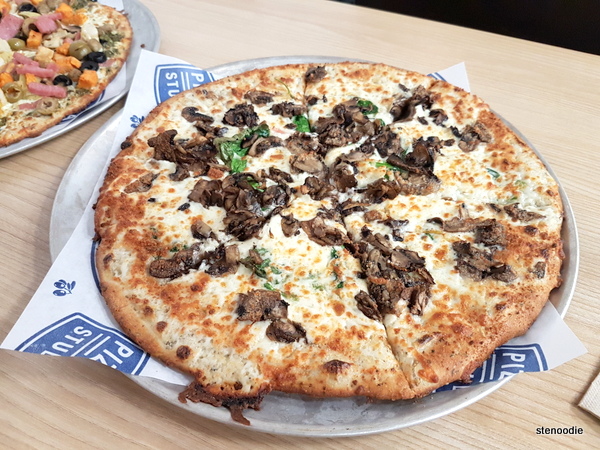 The prices at Pizza Studio are about the same as the other pizza places downtown, so even with the buy one get one half promotion, I’m not sure the deal is amazing since the pizzas here are smaller.  If the pizzas were a bit bigger, it would be more worth it in my opinion.  However, since they use a fixed-size oven for the 10″ pizzas, I’m pretty sure that is not something they would consider changing.

It’s still worth it to try Pizza Studio at least once, especially when you arrive after 7 p.m. for the promotion. 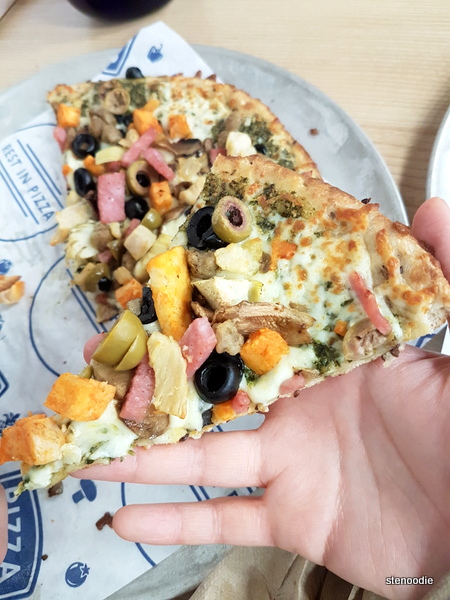 You can put as many ingredients on it as you wish

4 Responses to Pizza Studio in Markham