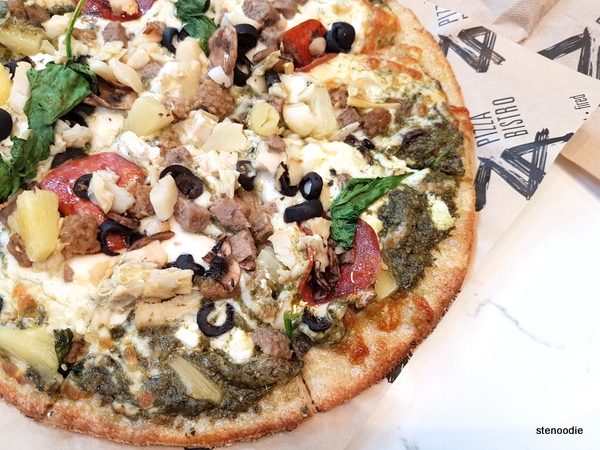 August 14, 2018:  Last week, I was invited to the media preview and tasting of a new pizza bistro opening up in Toronto.  Za Pizza Bistro is already an established and popular pizzeria in Manitoba and this new opening signifies one of three new locations they have expanded to in the province of Ontario (Downtown Toronto, Vaughan, and Mississauga)!

On this day, I was invited to arrive any time between 3:30 and 5 p.m. for the media preview.  (From 5 to 9 p.m. onwards, they were giving away free pizzas to the public too!)  When I arrived at the Adelaide and John area, I spotted an inflatable tube man and a local radio station set up outside the restaurant to gear up for its opening. 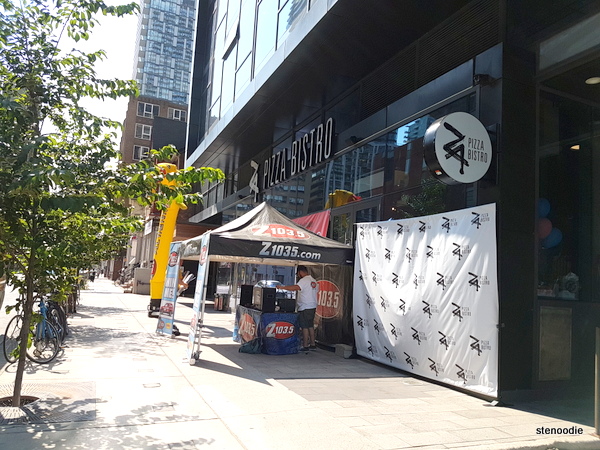 Inside the restaurant, Za Pizza Bistro is a high-ceiling spot with high tables and a second level.  All of their custom pizzas are 11” and cost $12.89 for a create-your-own-pizza experience.  (Or you can order the one- or two- topping pizzas for a lower price.) 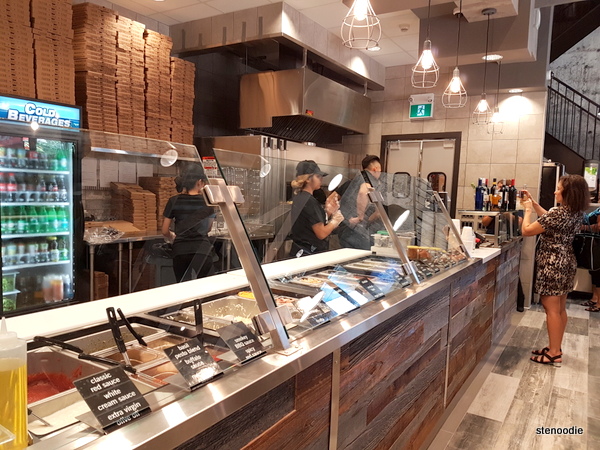 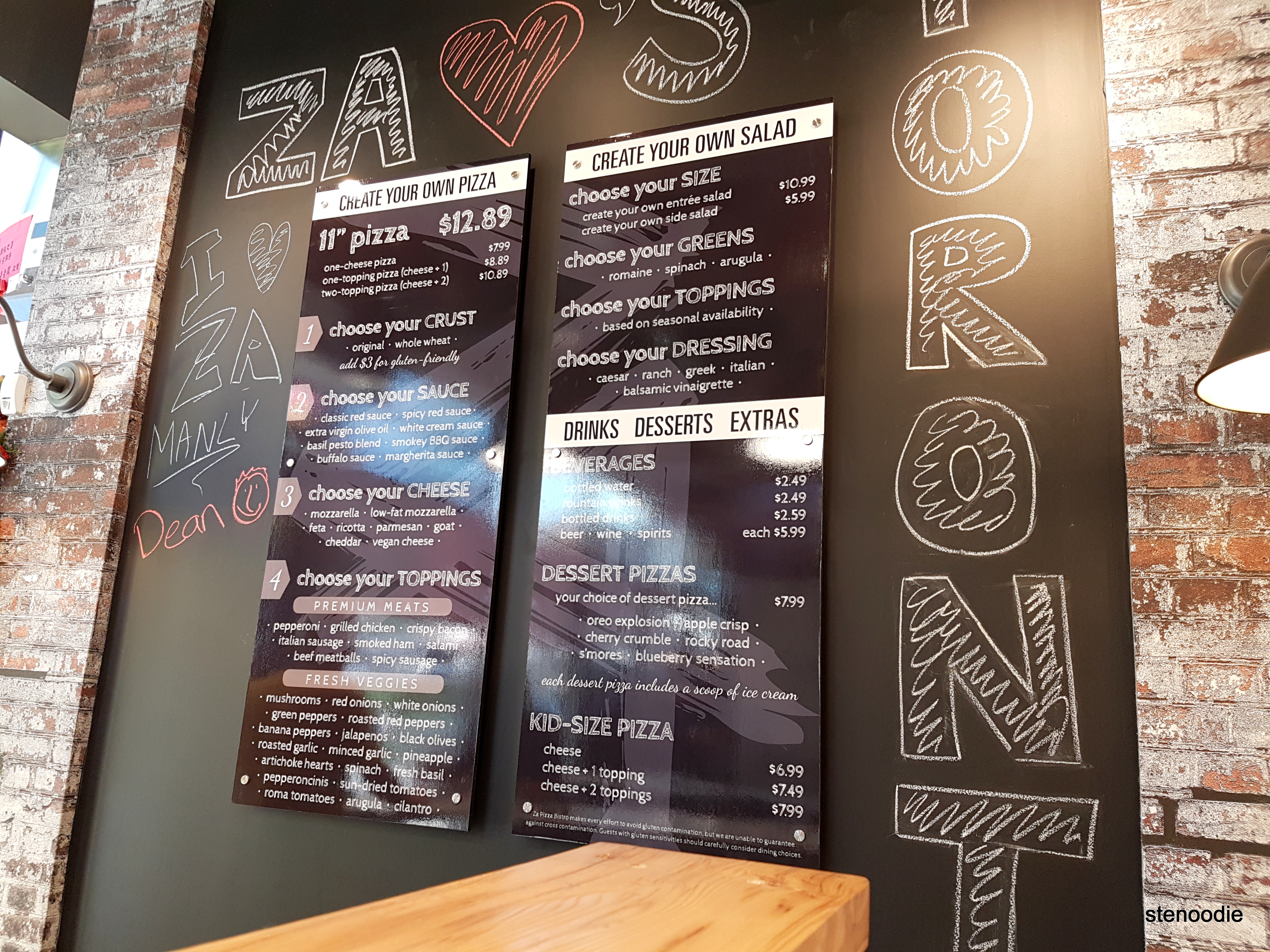 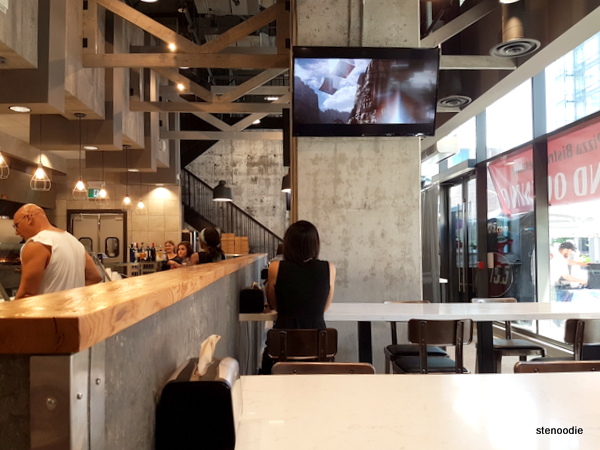 The ordering process was very similar to other pizza joints like Blaze Pizza, Pi Co, and True True Pizza in Toronto.  You pick the toppings of the pizza that you want and then your creation is put into the 531 F oven and ready to eat in a mere matter of minutes.  You go through four stations by choosing: the crust, sauce, cheese, and toppings (premium meats and vegetables).

Their dough was interestingly pressed together using a machine here.  It’s not like other ones where the dough is stretched out by hand.  (Perhaps using their machine is why their crust turned out so amazing.) 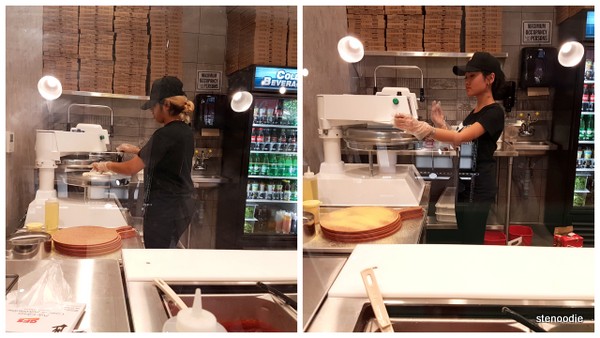 I was so excited to try this pizza out and my verdict is that it’s one of the most crispy crusted pizzas I’ve ever had!  I was really surprised and impressed with this because with all of the ingredients that I had chosen, it didn’t weigh down the pizza at all and still came out so crispy and crunchy!  It wasn’t overly burnt either and was perfectly done.  I was so impressed.  (At Blaze Pizza, I remember the ingredients were delicious but the middle of the pizza was a bit soggy due to all of the ingredients in it.)  Here at Za Pizza, I didn’t have that problem at all. 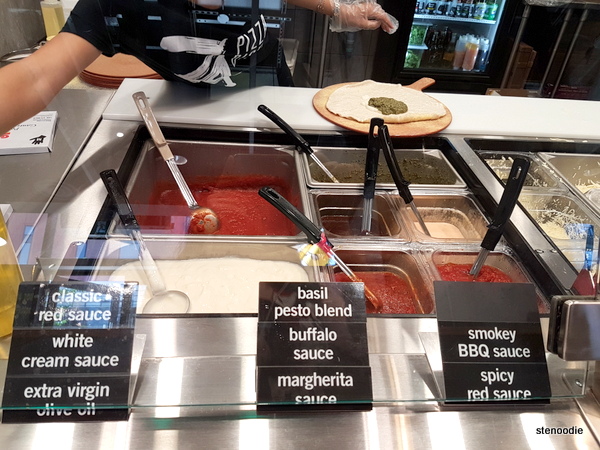 Step 1 and 2: Choose the crust and sauce

I had chosen the whole wheat crust with the white cream sauce and basil pesto blend.  When the girl asked me what sauce I wanted, I asked if I could choose two sauces and she said yes.  In my mind, I wanted a split pizza so that I could try both sauces.  (I’m still trying to stay away from tomatoes so I didn’t go with the classic red sauce.)

However, the girl misinterpreted my request because she combined the two sauces together on the crust.  I wanted a split pizza (XD).  It wasn’t a big deal though.

For the cheese, I chose mozzarella, ricotta, parmesan, and goat cheese. 😀 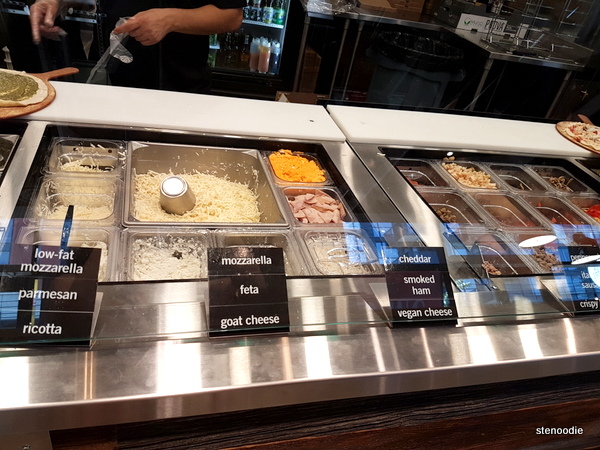 For the meats, I chose pepperoni (I found it funny that she only put on four slices — it didn’t spread out evenly on the pizza), grilled chicken, beef meatballs, and Italian sausage. 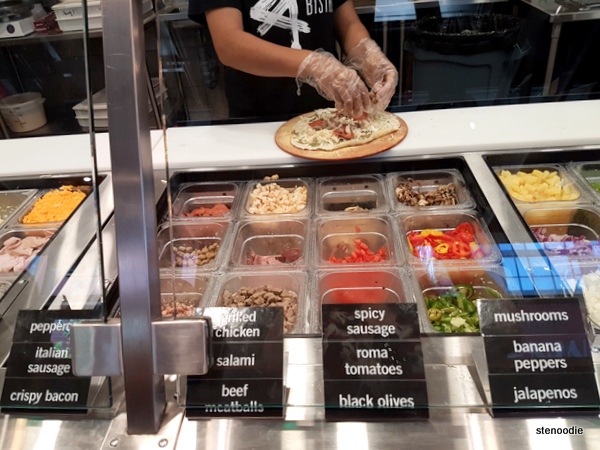 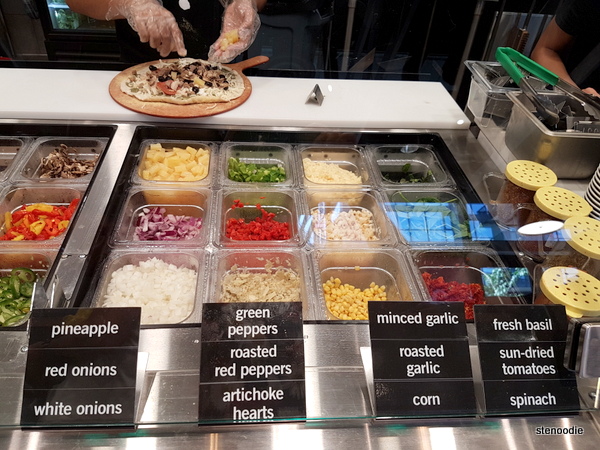 Whenever I order custom pizzas like this, I always choose a lot of toppings on my pizza because I like to try a bit of everything and it’s too hard to pick some toppings over others. 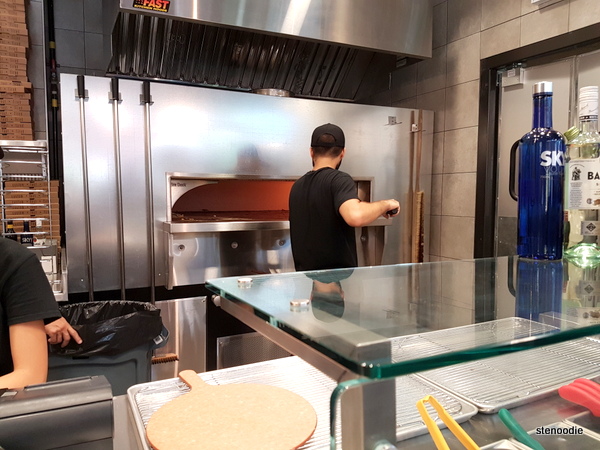 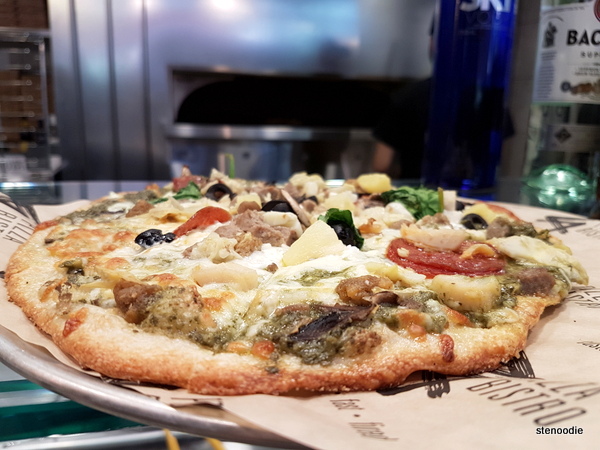 Fresh out of the oven!

Again, I loved the crispiness of the pizza.  The ingredients were fresh and I really liked the creaminess of the white sauce too.  My pizza was very cheesy, creamy, and satisfying. 😀 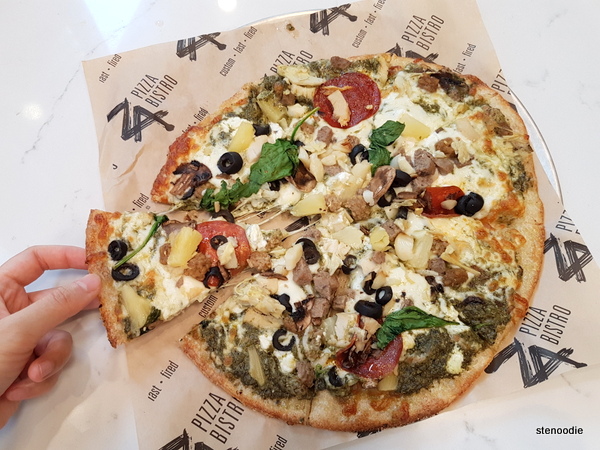 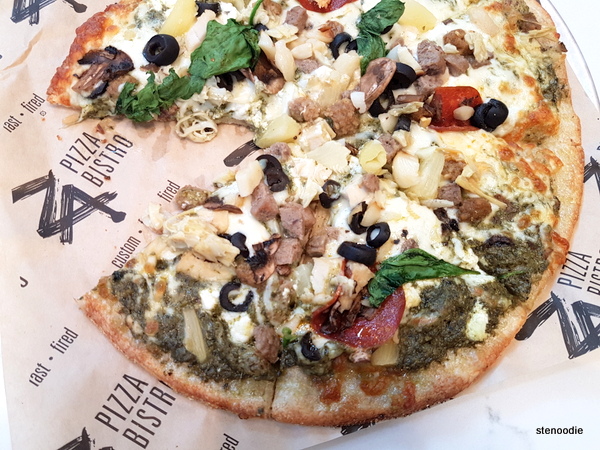 Za Pizza Bistro also serves kids’ size pizzas, dessert pizzas, and create-your-own-salads too.  They also serve wine and beer for date night (check out their deals on their website!). 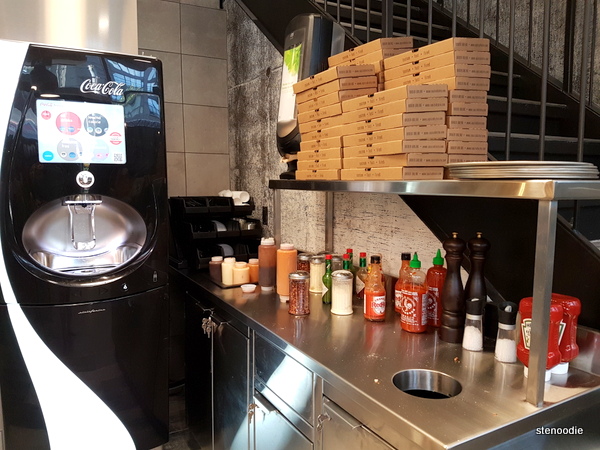 Drinks dispenser, sauces and condiments for further customizing your pizza

Thank you so much, Za Pizza Bistro, for inviting me to the media preview!  I’m excited to tell friends about this good pizza bistro! 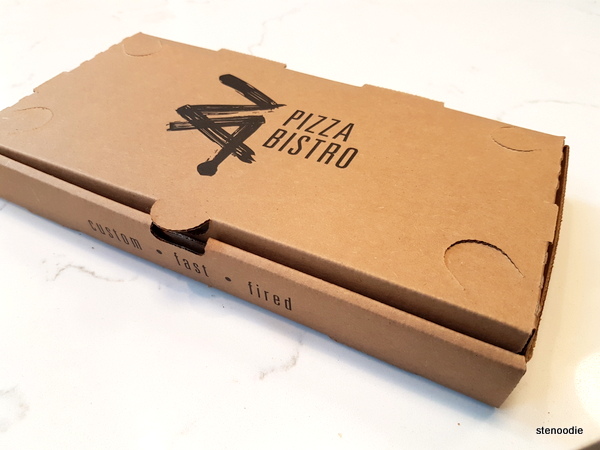 FTC Disclaimer:  Although Za Pizza Bistro reached out and invited me to a complimentary tasting to promote their new location, the opinions expressed here represent my own and not those of the company.