Beautifying Markham, one bag at a time

I’ve been inspired again to pick up litter around my neighbourhood after attending another annual Canadian Shoreline Cleanup with the Trillium Lions recently– you can view the blog post here.  I have always loved picking up trash… it might sound weird to you but it is a challenge to me to try to find all of the litter when walking around, a goal to be able to pick up as much garbage as I can find, and it’s fun (for me).

The last time I did a private one in my own neighborhood was when I went with my mom to Too Good Pond and I picked up several small bags of garbage.  Since then though, I’ve either participated in the shoreline cleanups only organized by someone else or I have organized it.  I’ve really missed these private ones because they concern more of the local areas and I can really take the credit for doing it too (it benefits me more on a geographical level I guess).

While picking up garbage, I always bring my trusty picker-upper tool, some plastic gloves (that my dear nurse friend provided to me; a whole box of them so I won’t run out anytime soon), and at least two plastic bags, one for garbage and one for recycling.  When I’m picking up garbage, I really don’t like running into people.  I know people see me doing it, but I would just rather be invisible and not have to be seen.  I know, it’s a little strange but I really enjoy this activity and would rather do it without having to interact with people in any way.  It makes it awkward for me.

Anyway, here are my findings for the clean-up days I’ve been doing around my neighbourhood:

There were a lot of tiny bits of trash around my street and the park!  I filled up the single bag of trash quickly with cigarette butts, plastic bags, bottles, and bottle caps, and tiny pieces of litter.  My hand cramped the next day from using my picker-upper tool so much!

I was actually so shocked to find this much trash actually.  I only expected a lot of cigarette butts and tiny trash but my bag filled up so quickly!!  I decided to call it a day after my bag was full.  I was out for around an hour and a half picking all these little pieces up.  Who would have known?!  (The park and streets looked quite clean but once I scoured for litter on the ground, there turned out to be so much that I collected!)  Small bits of trash really add up. 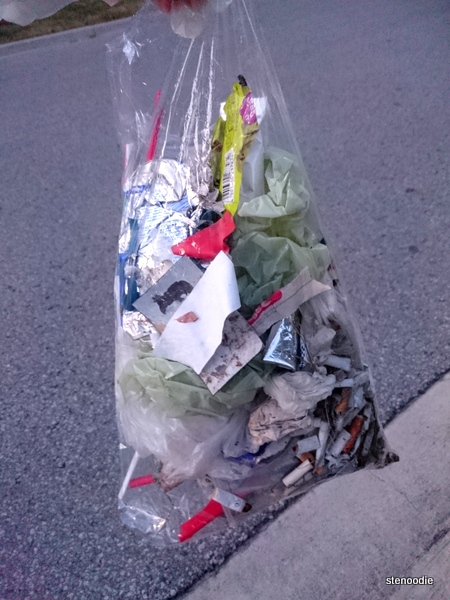 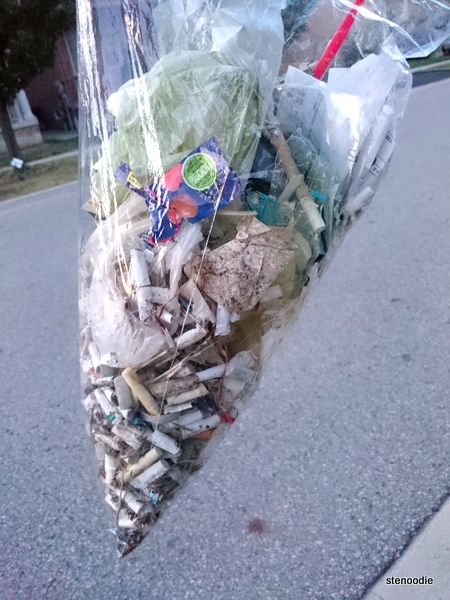 A lot of cigarette butts!!

Picking up trash around the same area as my first time, I did see fewer trash pieces left behind.  Yay!  My first-time efforts paid off!  Hehe.  There were a lot more people taking walks around this time too and one guy who was jogging said “thank you” to me as he passed by.  Aw, so nice of him and I was grateful that he was grateful for me.  On the other hand, I did overhear two ladies who saw me who said something along the lines of “plastic gloves… what’s the point of cleaning”.  Hmm…

On this visit, I found a pencil and a Q-tip.  Everything else were cigarette butts again, plastic bottles and caps, and many, many plastic bags that looked newly blown onto the ground.  It felt nice to be able to see my efforts resulting in a change too.  Even the cigarette butts that I saw were all fresh new ones.  (You can tell because the cigarette butts are still white in colour and “clean” versus faded away and discoloured due to the elements.) 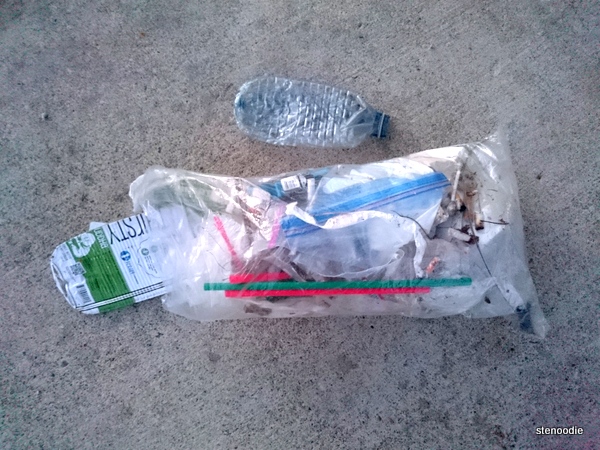 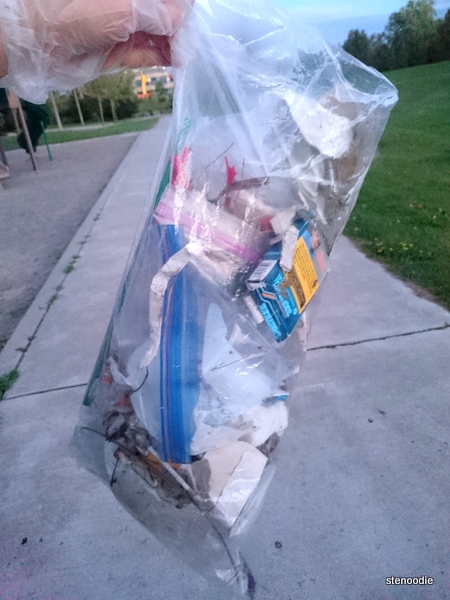 So many plastic bags this time

I'm a stenographer, foodie, avid traveller, and new mom who loves to share her experiences with the world.
View all posts by stenoodie →
This entry was posted in Philanthropy and tagged cleaning up trash around Markham, local garbage cleaning, Markham, picking up garbage, stenoodie cleanups. Bookmark the permalink.

2 Responses to Beautifying Markham, one bag at a time