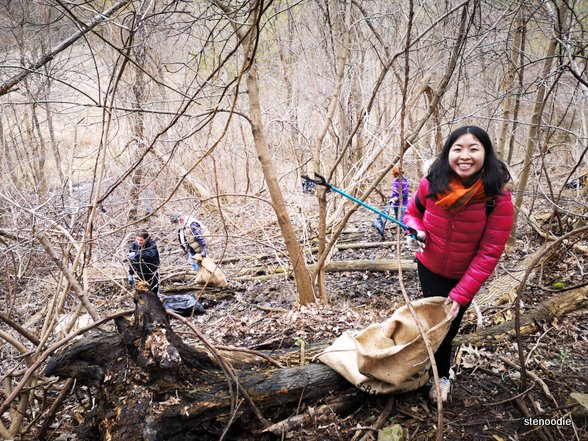 April 27, 2019:  I love cleanups.  There’s nothing else that will get me out in the fresh air and grassy areas or cement roads or whatever it is with a trusty trash picker, plastic gloves, and a bag to clean out everything that does not belong in nature.  Although I have done cleanups of my own in the past, there’s just nothing like cleaning up with a group of individuals with the same passion and intent.  It’s much easier to join a clean-up, especially a large clean-up of this scale, when there already are other individuals organizing it.  Thank you so, so much to the one who spearheaded “Don’t Mess with the Don” and all the individuals and organizations that subsequently supported this!

I heard about this “Don’t Mess with the Don” initiative when Ken sent me the Facebook event link.  Right away, I was in.  I was excited!  This event was lovingly organized for more than a month before the April 27 date.  Apparently, this was their second year cleaning up the Don Valley Ravine, but the first one with so many volunteers taking notice and joining in.

Before the event, electronic waivers were issued and signed.  There were even televised programs of the impeding cleanup day as well as preliminary sessions to arrange team leads and orientation sessions and companies to create volunteer T-shirts, set-up water stations, etc.).  There was a lot of behind-the-scenes work put into making this a successful event.  The event was slated to run from 10 a.m. to 2 p.m. at the Lower Don Ravine (the address to meet at was the E.T. Seton Park parking lot). 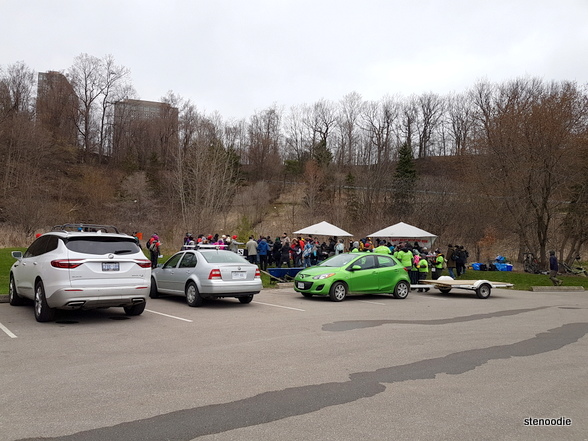 Look at all the volunteers already arrived before the 10 a.m. start! 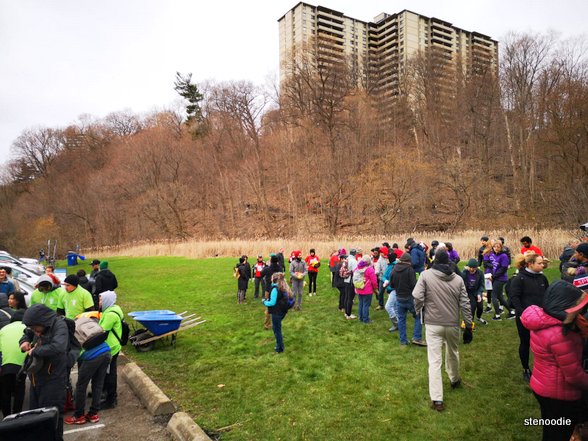 Seeing as there were over 1,200 people RSVP-ed as “going” on the Facebook event page, Ken and I made sure we arrived early to get a parking spot in case there wasn’t going to be enough.  Sure enough, we arrived at around 9:50 a.m. and there were plenty of parking spaces.  Dozens of volunteers had already arrived and ready.

We signed in and were placed into a group with a team lead.  We were given a burlap sack each and some gloves.  I brought along my trusty garbage picker as usual.  (From my experience in picking up garbage, having such an extension of your arm makes a huge difference for the next day — you won’t be as sore.  Although if you like feeling the soreness from doing a dozen squats during the trash removal process, that’s a good exercise bonus as well.) 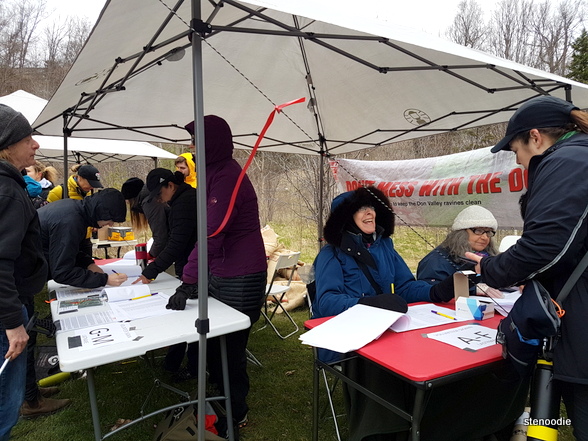 Sign-in crew. Everyone was so friendly and happy to see the volunteers 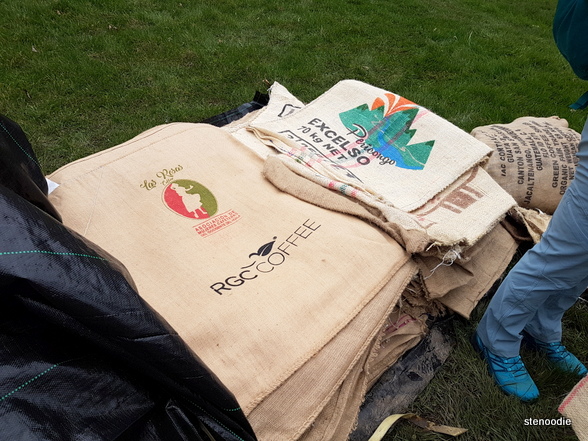 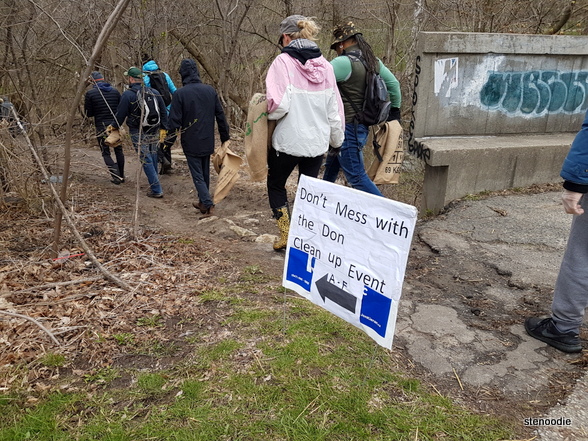 Our team lead, Mike, led us to the Lower Don Ravine area where we were allotted section “F” to clean.  At first glance, the ravine didn’t look too bad and was rather clean.  (It wasn’t as bad as some of the picture I’d seen online where the garbage was literally strewn all over the ground.)  The area was an uphill portion, and we scaled the hill to get to the upper parts with the fallen branches and plants.  I’d never done any cleanups where there was uphill terrain like this.  All of the cleanups I’ve done were all level-ground.  It was a challenge in itself to get up to the upper part of the hill and carefully navigate through all of the branches without stepping on the fragile life that was popping up in the early springtime season. 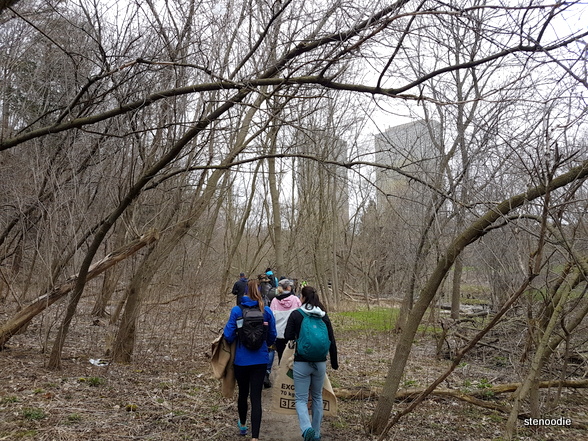 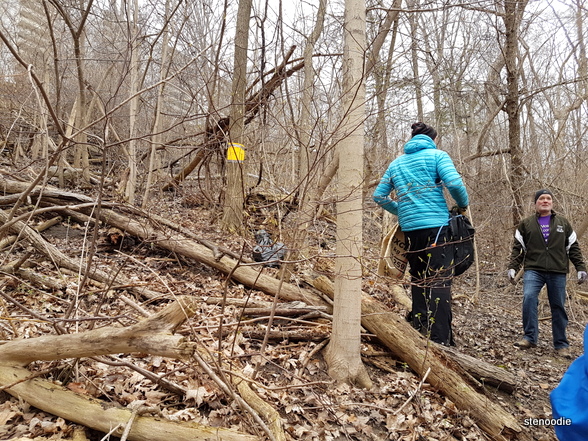 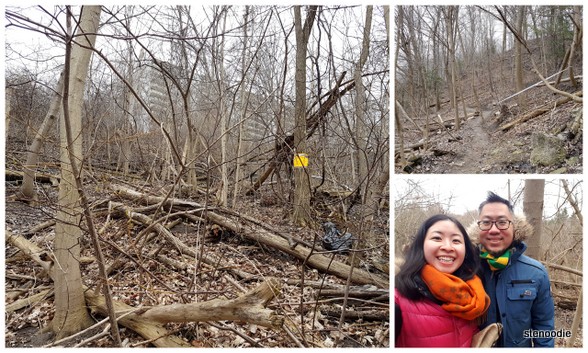 Selfie at the start of the cleanup process!

It was muddy, and we quickly realized that there was indeed a lot of litter underneath the fallen branches and in between the vegetation.

The most amount of garbage we discovered that day were plastic bags.  Unlike the urban cleanup areas where cigarette butts dominate the litter, it was all about the tiny pieces of plastic here.  There were numerous candy wraps, small broken up pieces of plastic, and tons of plastic bags, all in various stages of decay.  Between the two of us, we only found two water bottles and two straws.  Surprisingly, we found a functional soccer ball too.  There was also a heavy jug of unknown liquids. 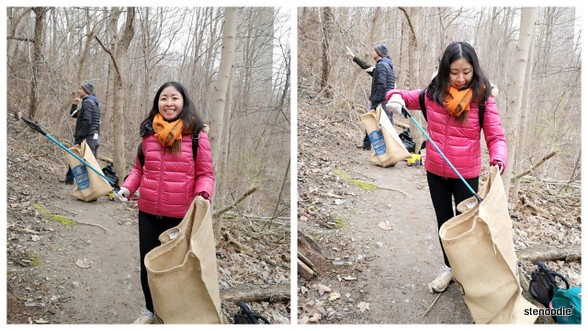 My trusty stick can grab the small pieces so efficiently

The worst part about the garbage was that it was all buried and hidden under the leaves and vegetation.  Remember, this is April and springtime.  All of the fallen leaves would have been from the past autumn season or even previous autumns.  This part of the Lower Don Ravine has been neglected for so long that seasons after seasons of leaves have covered the litter that has been thrown here.  It was shocking and unbelievable to find so much garbage underneath the natural landscape.

At many points, finding the shiny corner of a plastic bag led to me pulling out an entire bag that was buried under the mud and grass.  Sometimes, the bags were already in stages of decay and thus I had to be careful when pulling out the bag.  Otherwise, it would have broken up into even more tiny pieces.  My trusty garbage picker wasn’t useful in these cases.  I had to get down and carefully remove these with my hands. 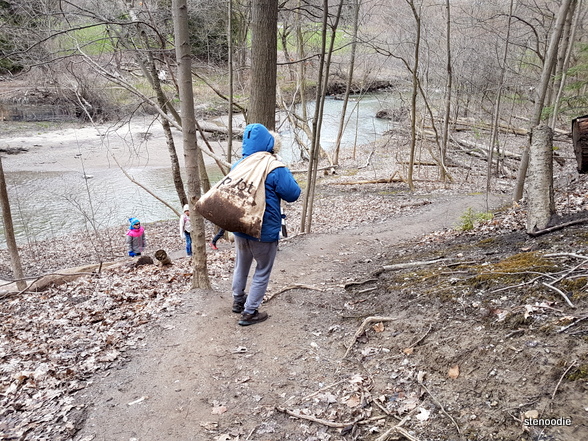 Our first burlap bag filled up slowly since it was mostly of many tiny pieces of garage that had already broken down.  It’s not only about the large pieces of garbage that we should be worry about but also about the small pieces.  The plastic bags and plastic wrappers had been there so long in the earth that they had started to break down and mix itself into the soil!  The plants and vegetation cannot grow properly when there are swaths of plastic blocking their roots.  It was unbelievable.  Furthermore, when these little pieces of plastic get into the waterways, that’s when the micro-plastics will eventually get into our water system too (it already has from what I’m aware of).

The burlap bag was heavy with mud that all of the garbage was unearthed from. 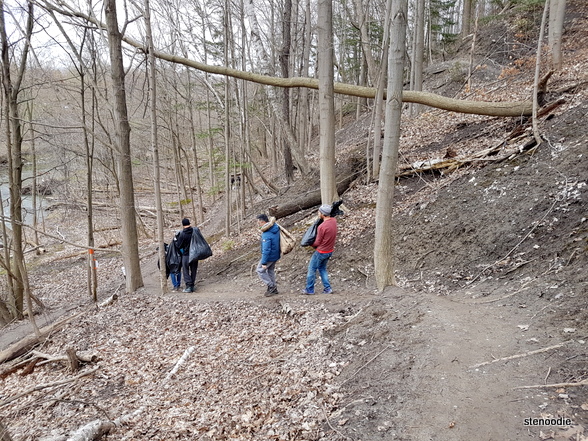 In a way, although these burlap bags donated from a local coffee shop seemed initially to be a great idea (no plastic), but hygienically, I wondered if they were a good idea.  We were digging out so much junk and wet garbage that when we pulled the bags out and tried to move them to the side of the road, they were leaking.  I know we were supposed to be prepared with wearing clothes that we didn’t mind getting dirty, but was using burlap sacks for picking up garbage a better idea than plastic bags?  When we ran out of the burlap bags though, we did have the black plastic bags on site for the garbage.

After the first bag, we continued along the route and I picked up some tiny pieces of garbage along the route that perhaps might have been missed.  This time, instead of scaling the slanted areas of the hills, we headed towards the flat ground area near the ravine.  Again, at first look, it seemed like all of it appeared clean but once we started walking closer to the ravine, that’s when we discovered the hidden “treasures”(!).

Once you spot one piece of plastic, you’re bound to pull out more.  The leaves on the ground literally covered all of the garbage.  I couldn’t believe it.  You could literally sit there on the ground and rake the leaves and keep finding more garbage.  There were layers of garbage and leaves and fallen twigs and branches all mixed together.

In the end, we left after three hours’ worth of cleaning.  At this time, the Desjardins’ insurance booth had bananas on site for all of the volunteers.  Another booth was setting up some hot chocolate and soup as well.  There was also a Toronto water station truck for volunteers to fill up on clean drinking water (bring your own bottle).  There was a bicycle repair booth.  There were plenty of porta-potties as well (does the park usually have these?). 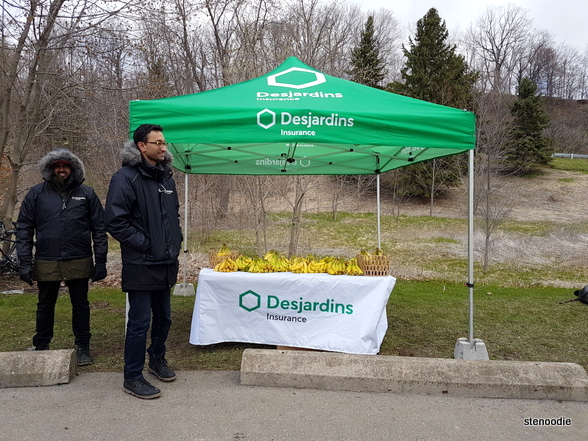 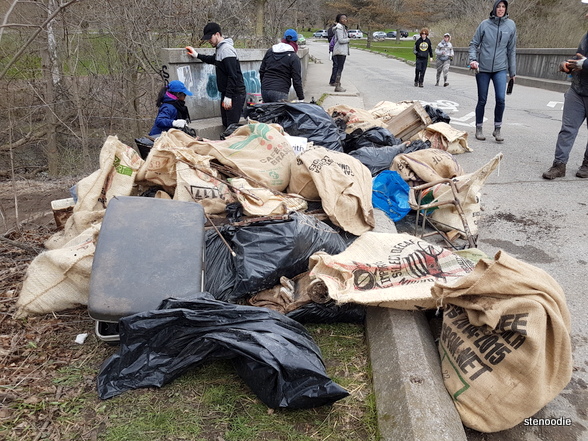 All of the garbage piled out ready to be transferred 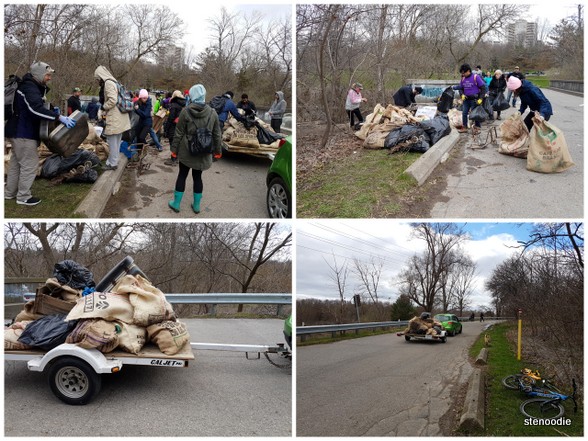 We watched as volunteers started using wheelbarrows (and cars) to maneuver the bags of garbage from the side of the road to the main parking lot where a huge mountain of garbage was being compiled.  At the time we took this photo, I overheard that there were about 250 bags of garbage already.  Afterwards, I believe the tally went up to 1,300 bags of garbage in total!  An estimated 800 volunteers had turned out for the event.  They had to get the City of Toronto garbage trucks in to carry all of the garbage out then next day.

In the garbage pile, they found a suitcase, several shopping carts (that were buried and had to be dug out of the mud) — can you believe that?!  — numerous car tires and wheels, baby stroller, and so much more.

View the photo album compiled by Brian Tao here.  Thanks for sharing your photos, Brian! 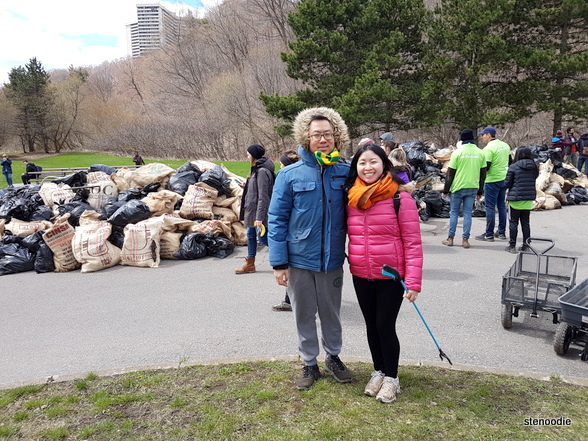 Photo in front of the garbage mountain

I am so glad that someone started this initiative and spread the word so that all of us could get involved.  I can’t wait for more large-scale initiatives like these.  Once the Don is cleaned up more, hopefully we can move on to other bigger sites?  I remember the year when I cleaned the Bluffer’s Park with some friends, we found SO much garbage there as well (and there were only 6 of us at that time).  A bigger group with more power would be more effective. 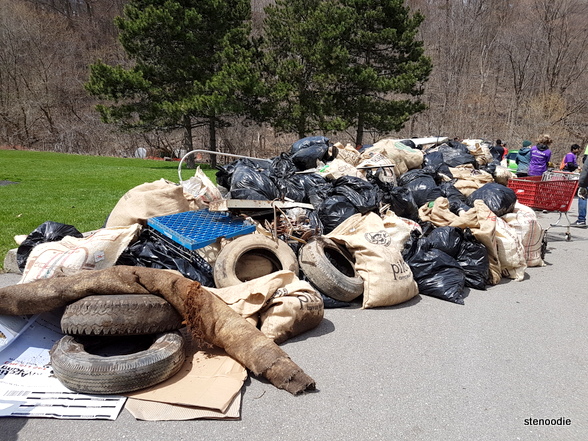 A video of the garbage collected at the three-hour mark (a photo doesn’t do it justice):

Once again, thank you so much to those who started this initiative and everyone who came out!  We need to make sure that no garbage gets into our waterways so that our animals (and humans) don’t ingest any of it!  Human garbage doesn’t belong in nature!