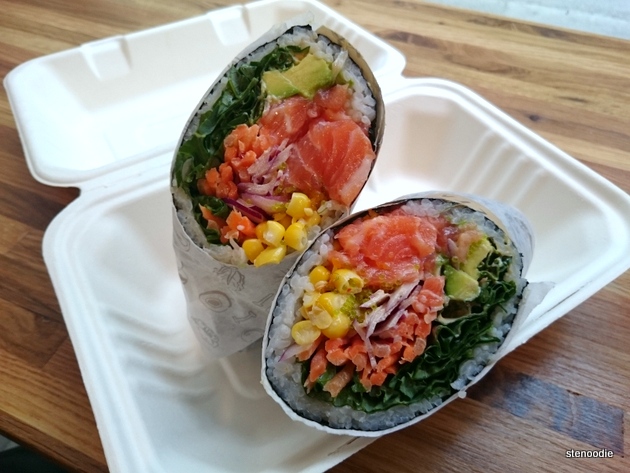 Yay!  I finally got to experience the sushi burrito craze!  The first sushi burrito I saw floating around the social media channels online was a sushi burrito outside of Canada.  (Yes, it is a cross between a sushi roll and a burrito.  Who doesn’t love all the contents of a sushi rolll inside a big burrito? :p )  Then all of a sudden, there was one available from a food truck in Toronto. As much as I love sushi and this new food craze, I wasn’t ready to commute all the way downtown to search and chase this food truck around.  Thus, when I found out that Rolltation was newly opened and selling sushi burritos (and poke bowls) downtown, it was the perfect spot to try it out.  Yay! 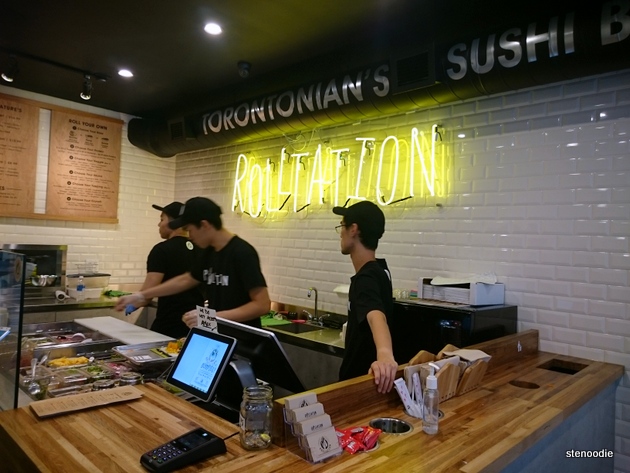 The staff working at Rolltation

Tracy and I met up and we shared the Classic Salmon Sushi Burrito.  They had many other types too including Bulgogi Beef, Shrimp, Vegetarian, and more.  You could order a poke bowl too (which looked like a deconstructed sushi burrito in my opinion, haha). 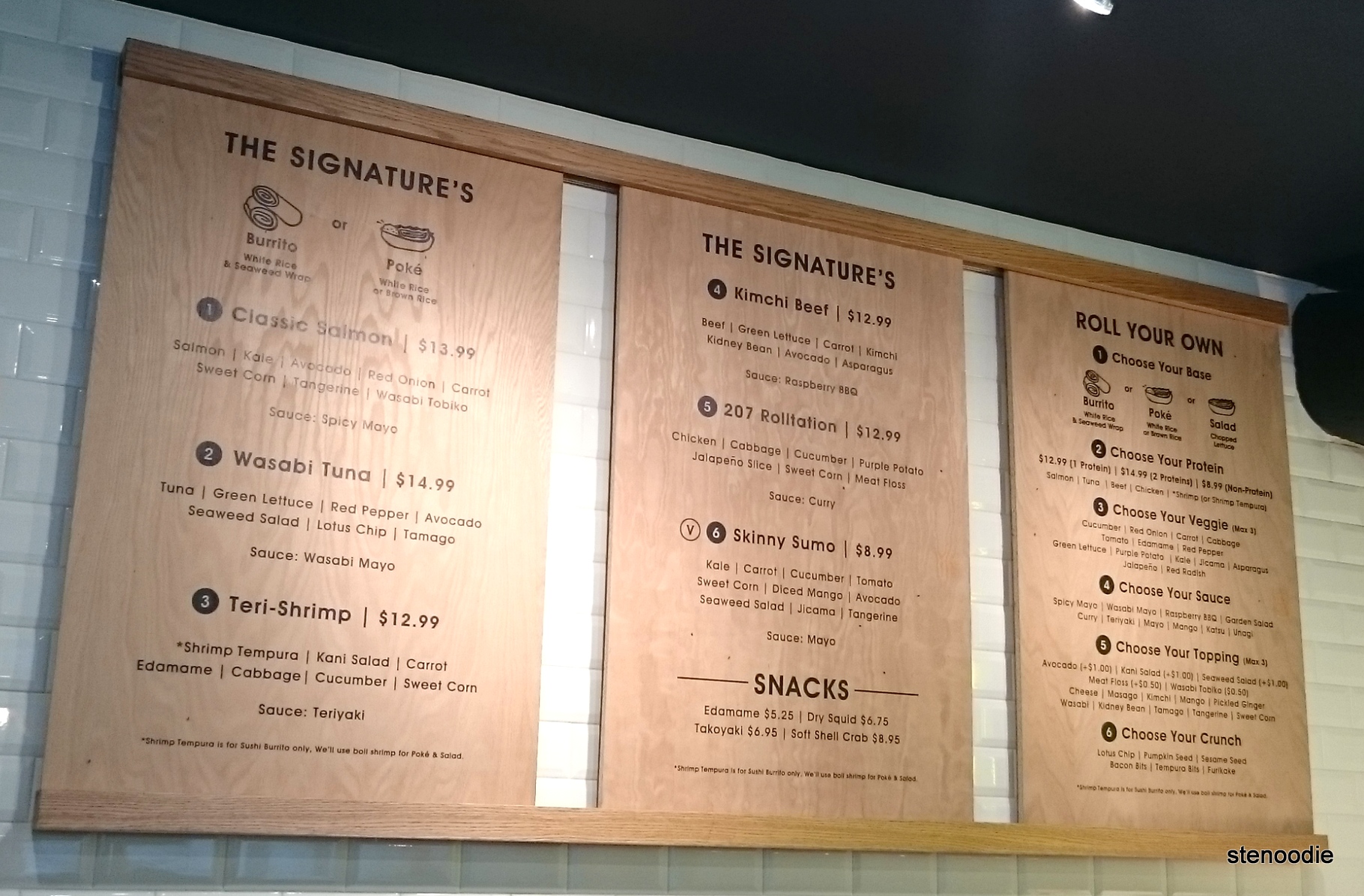 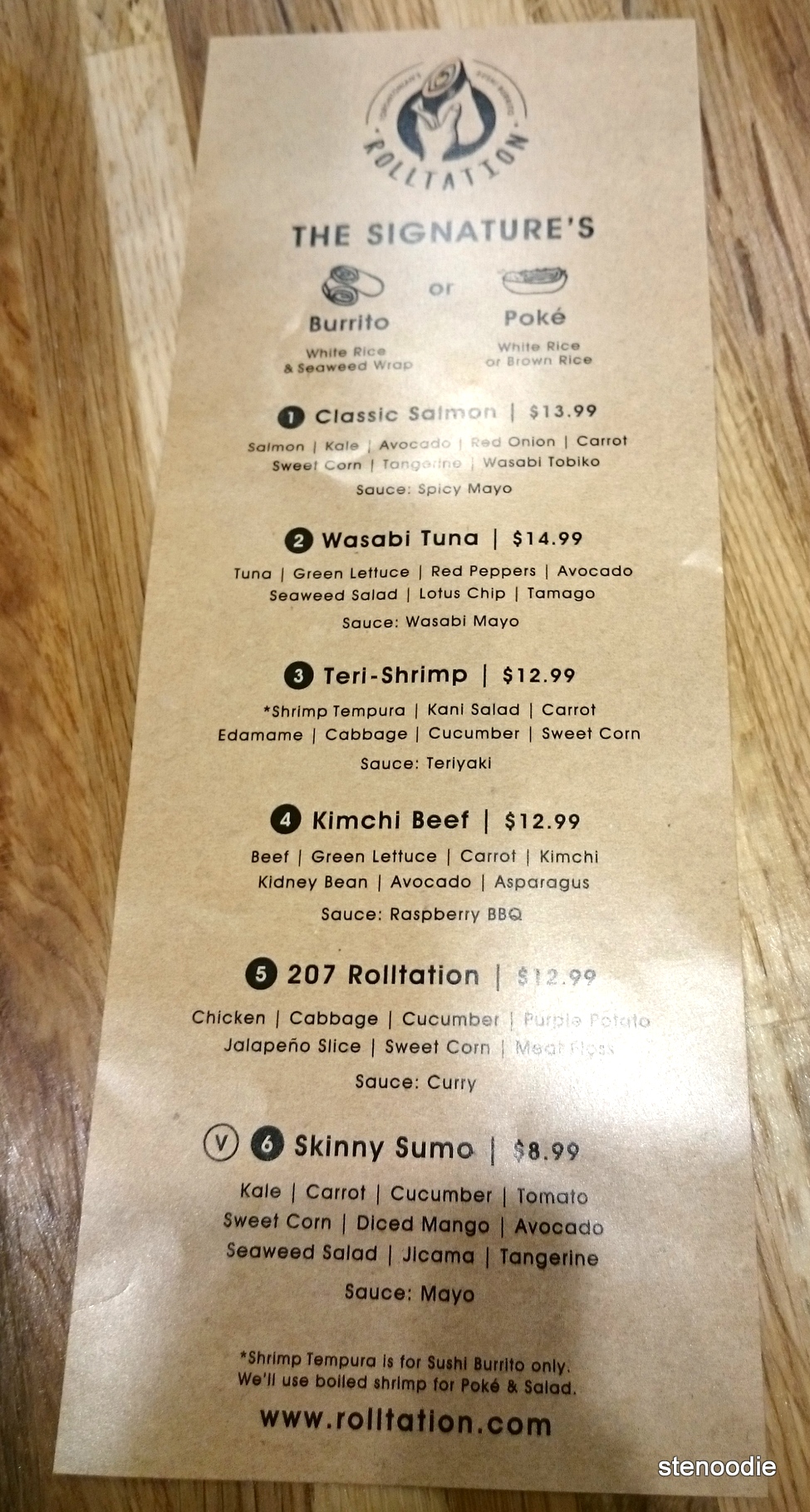 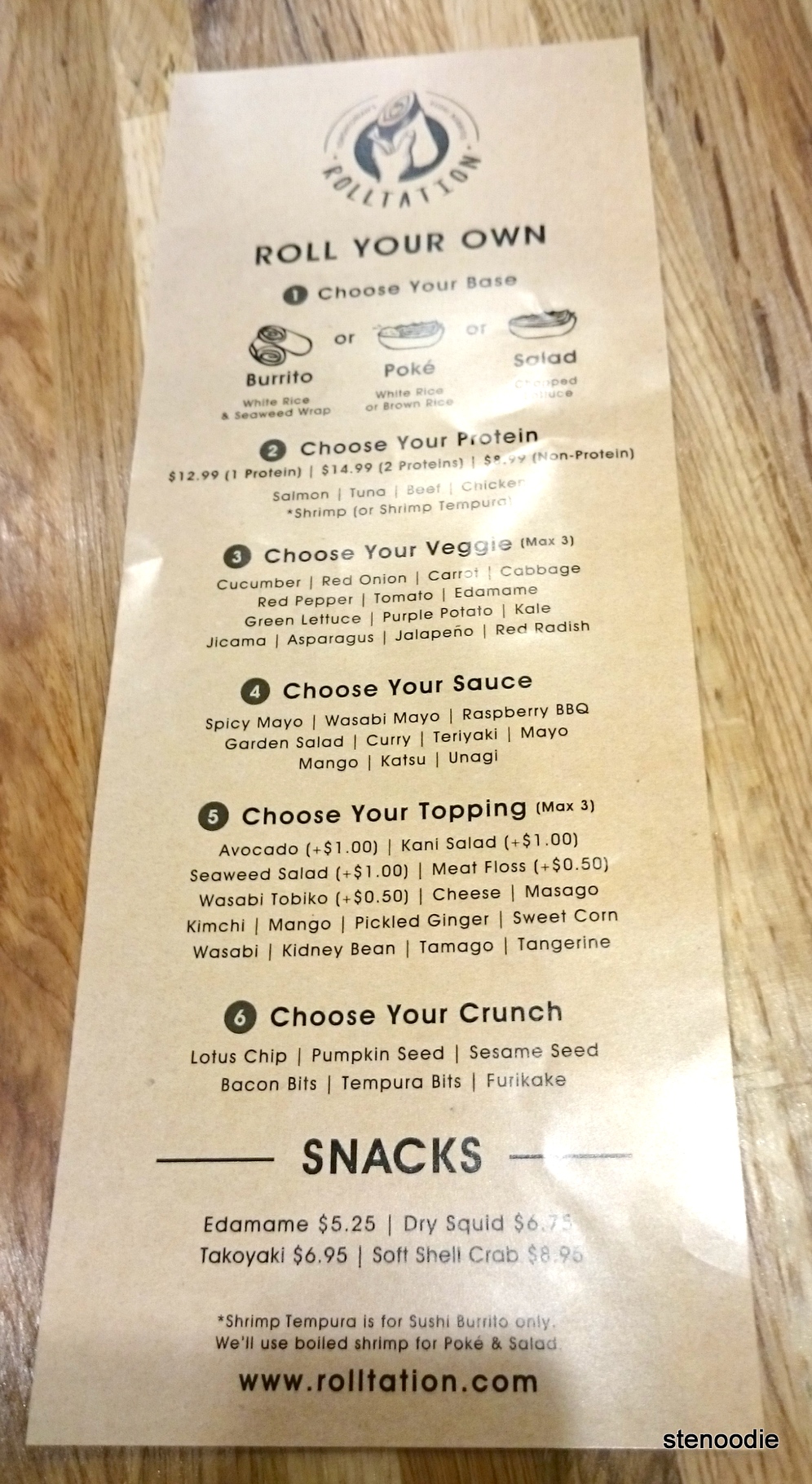 A sushi burrito is not cheap.  It cost $13.99 ($15.81 after taxes) for the Classic Salmon Sushi Burrito.  You could watch the guy behind the counter assemble your sushi burrito and use ingredients that were colourful and looked super fresh. 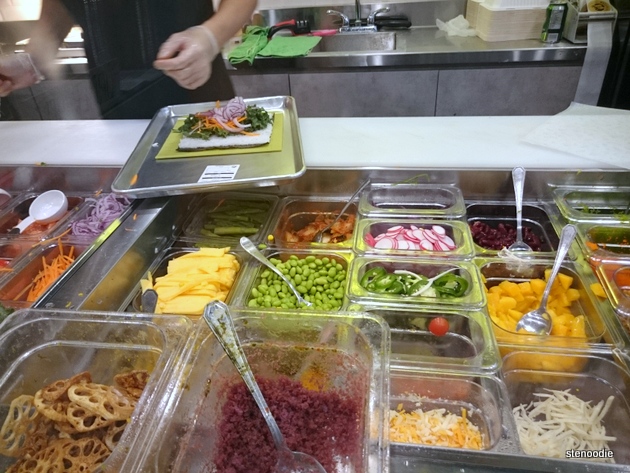 You can watch them put of the ingredients into the burrito 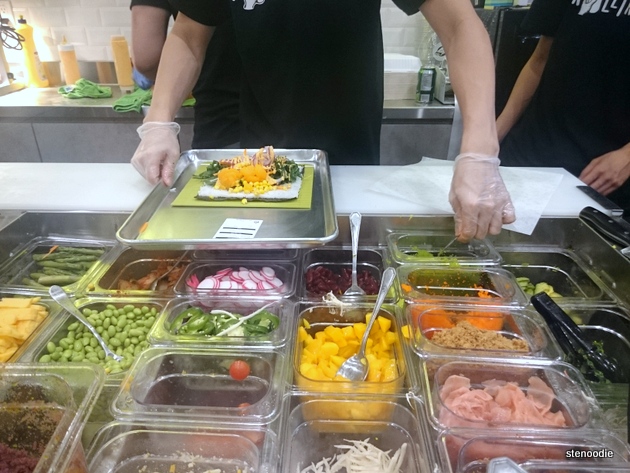 Those mandarins were so fresh 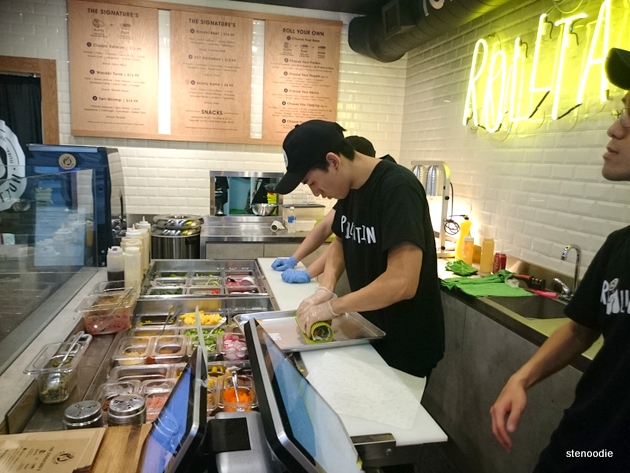 Rolling up that sushi burrito

When eating it, I did like how the ingredients were extremely fresh, the rice was minimal, and the salmon was super fresh!  It was good.  I found that dripping a few dollops of soy sauce into it helped the flavour too.  Also, another thought was that because there were so many fresh and crisp vegetables in it, at one point, it felt like I was eating a salad.  Maybe this could be branded as more of a “sushi and salad in a burrito” instead. XD

I think to improve this sushi burrito, they should put only ingredients of what a normal sushi roll has.  Leave out the kale, corn, carrot, red onion, sweet corn, and tangerine.  A regular sushi roll doesn’t even have those ingredients so why would you put that in this?  (Actually, I know that answer to that; it has to do with profit.)  If this was to be a true sushi burrito, it should only have salmon, avocado, wasabi tobiko, and spicy mayo sauce.  Dear reader, what do you think about that?

Edit: Actually, those ingredients are found in a typical burrito…ah, okay, then it makes sense.  But still, I would rather eat a “sushi burrito” with just ingredients found in a sushi roll 🙂 . 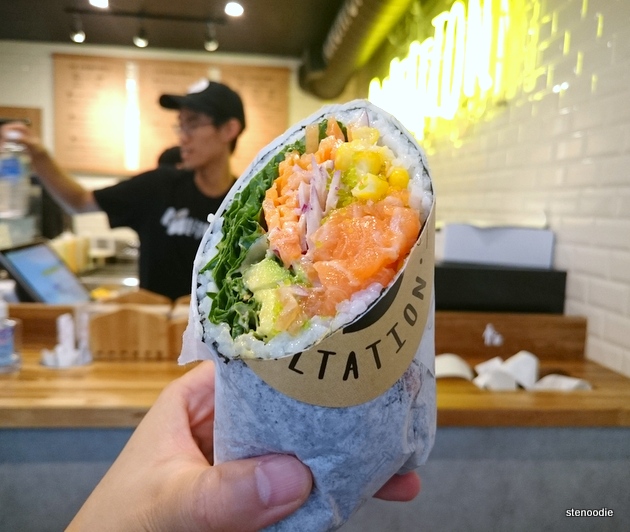 There were only five stool seats at the counter at Rolltation so don’t expect to dine-in when you arrive — however, you may get lucky like we did and get a seat (also, the turnover for a seat is high since people are merely eating sushi burritos and poke bowls here, which aren’t meant to take as long as a full meal would).  It’s designed to be a take-out place and the space is quite small.

The girl next to me had a poke bowl and I couldn’t kept but ask if I could take a photo of it just for reference sake.  No shame. 😛  She was also okay with it too. 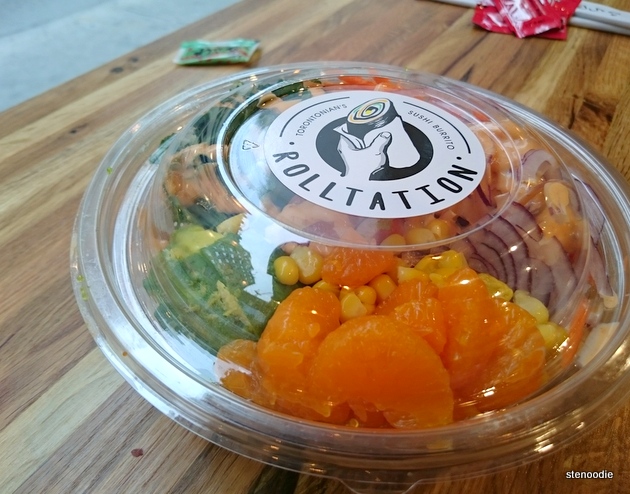 Poke Bowl. It looked like the Classic Salmon Poke Bowl

In the end, I was so glad to be able to try my first sushi burrito.  I’m glad I shared it with a friend though because $16 for just one sushi burrito is expensive. 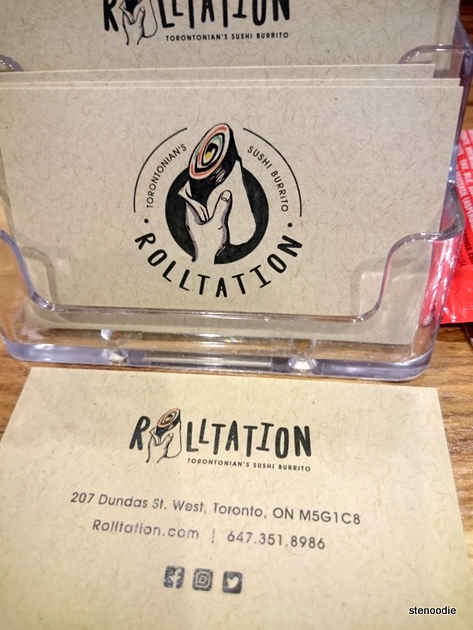 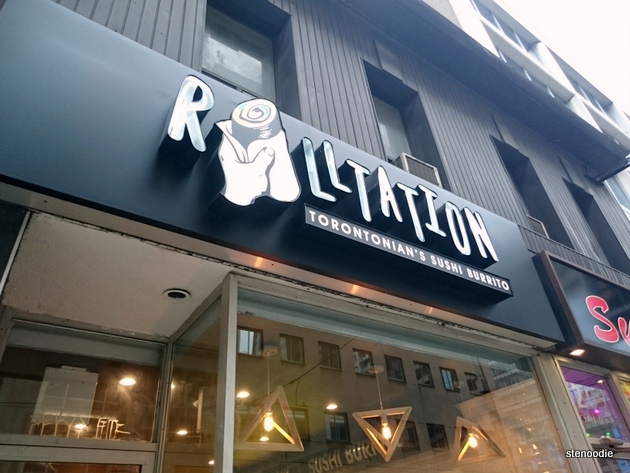 1 Response to Sushi Burritos at Rolltation!