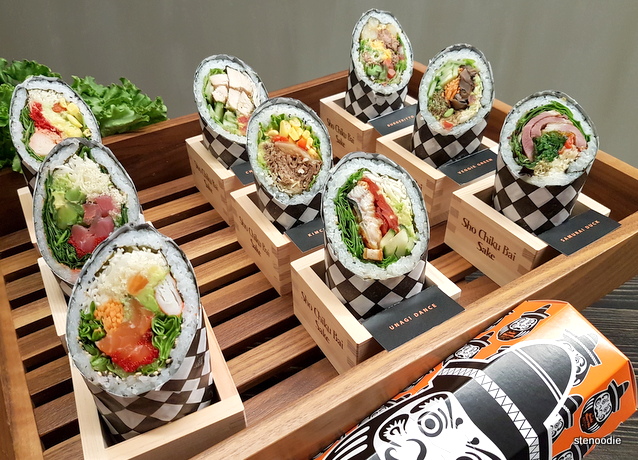 Approximately a month ago — two months — I went to a media tasting at Mi’hito Sushi Laboratory (on June 2, 2017).  (Yes, I am finally done my current backlog and can go back to blogging about the restaurants I went to in April/May/June again to catch up!! :D)

This media tasting was hosted by @DKLoEvents and was actually the second event of his that I had ever gone to.  I was really thrilled with this event because everything was organized extremely well and the event ran smoothly from beginning with end with lots of delicious food and generous portions for us to try too!  It was seriously one of the top big-group media tastings I’ve been to. ^_^ 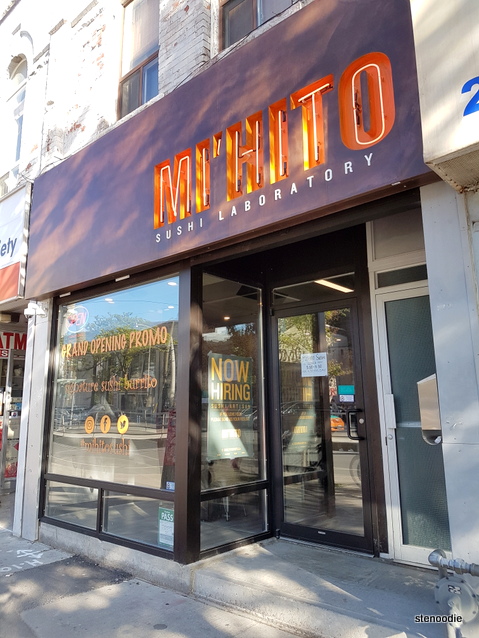 Located at College and Spadina

I got to Mi’hito Sushi Laboratory at 6:20 p.m.ish which I believe was early as the event was slated to begin at 6:30 p.m.  There were a lot of familiar faces there already and it was nice to see these fellow food Instagrammers again. 🙂

Mi’hito Sushi Laboratory is a fast casual restaurant that offers everything fusion sushi creations.  This included everything from the trendy sushi burritos to poke bowls but also sushi tacos and sushi nachos!  They really took it up a notch to differentiate against their competitors by including tacos and nacho version of sushi too.  I was excited to try it. 😀 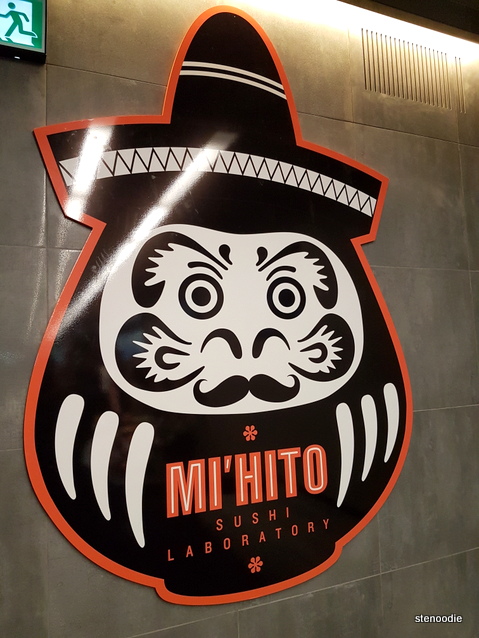 Not only did we get to try their sushi nachos that night (among other things), there was a giant display table laid out for us to take photos of their menu offerings and also ingredients of the menu items laid out in ‘flat lay’ format.  It was beautiful and the lighting was perfect.  I really appreciated and admired the way they set everything up so flawlessly and beautifully. ^_^ Good job, Mi’hito Sushi! 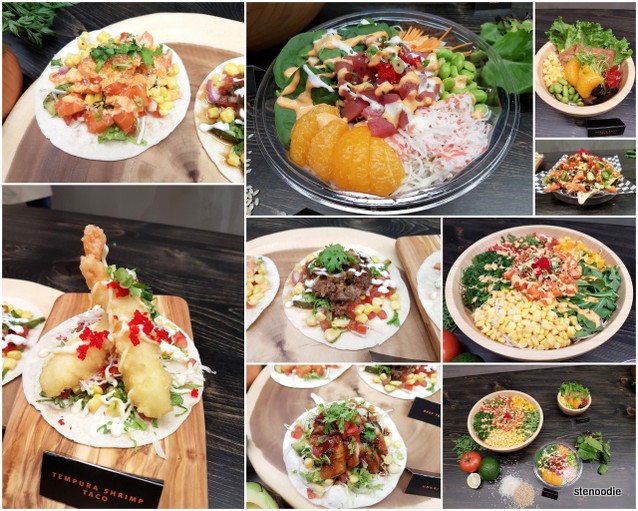 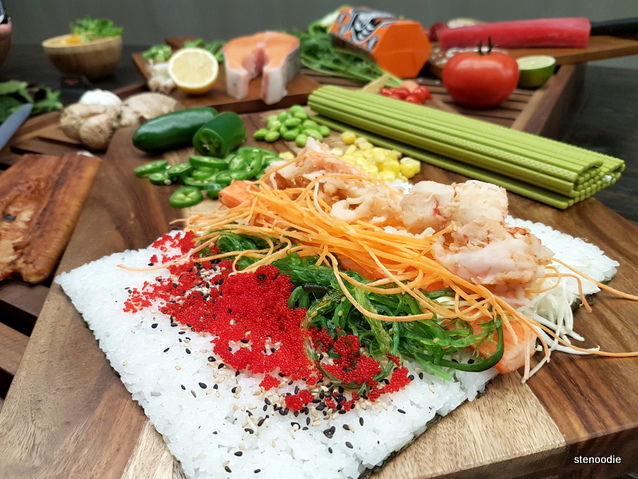 This shows you the inside of a sushi burrito 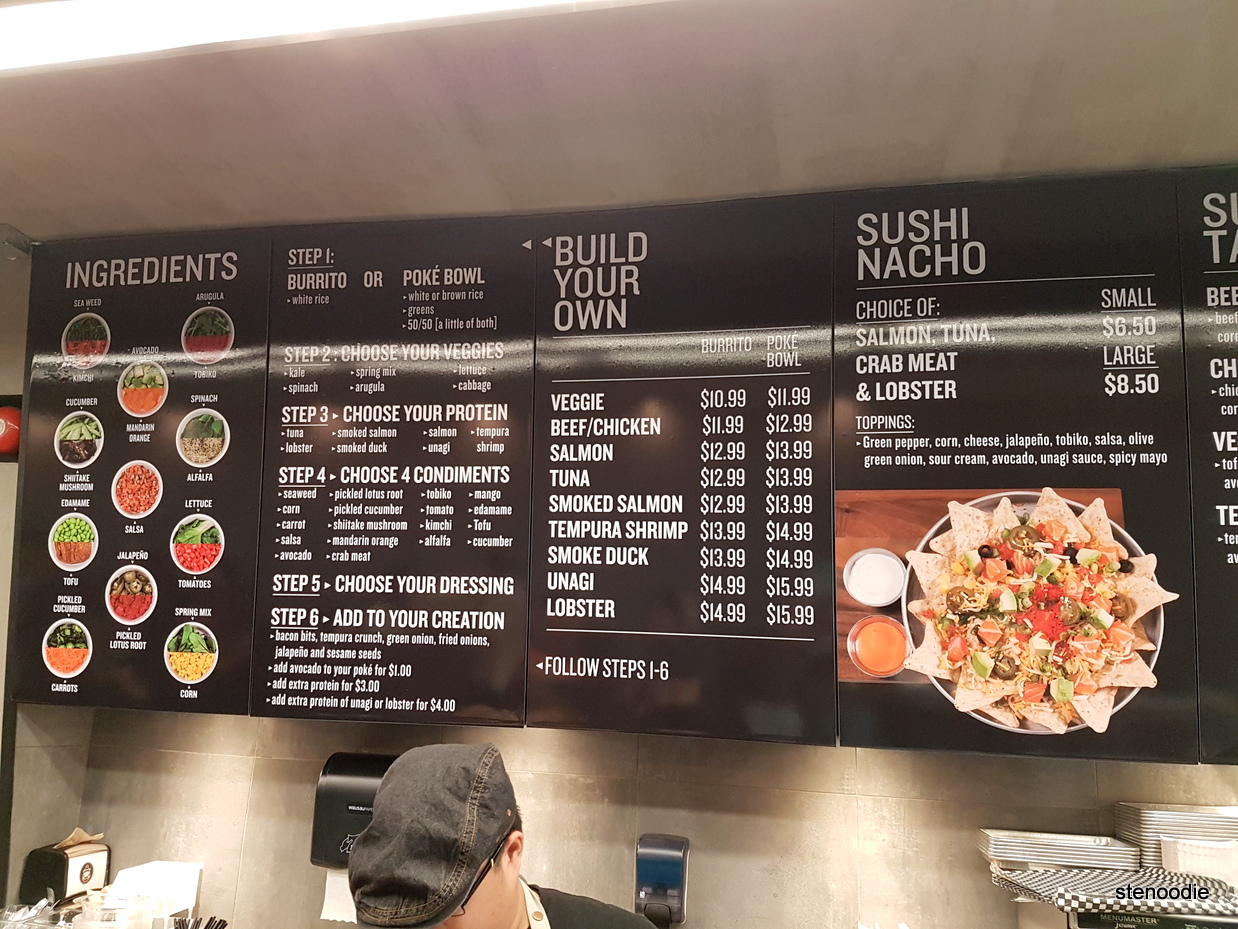 Build Your Own poke bowls or sushi burrito prices 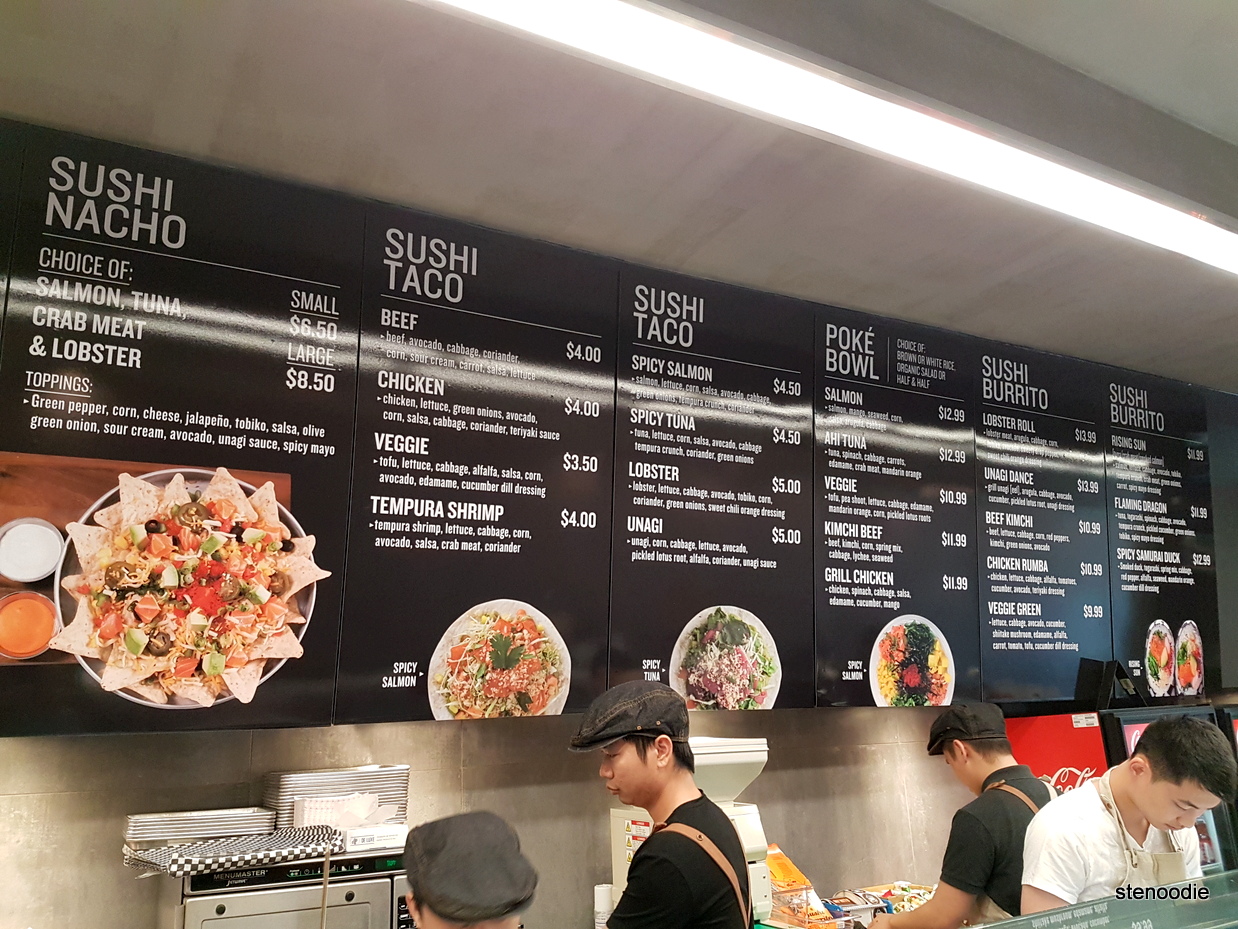 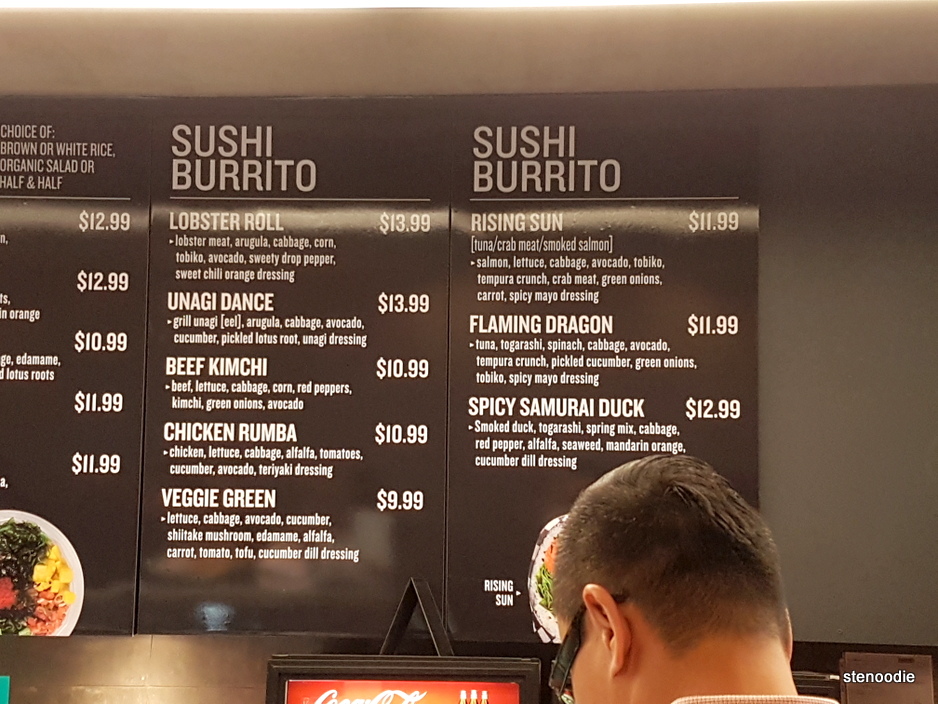 They also had samples of their “healthy power juices” for us to try. 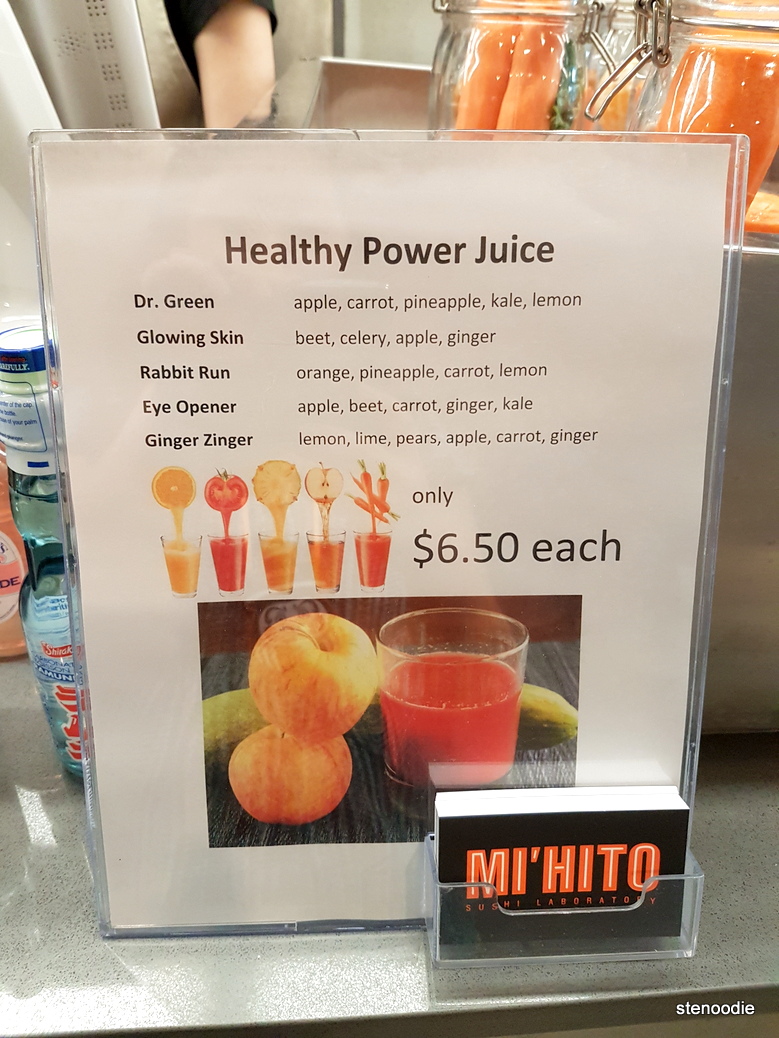 I tried the “Glowing skin” power juice made with beet, celery, apple, and ginger.  It was very refreshing and raw indeed. 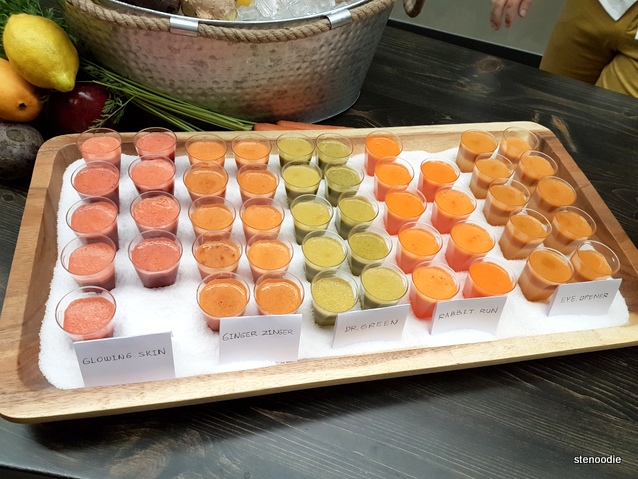 Samples of their power juices 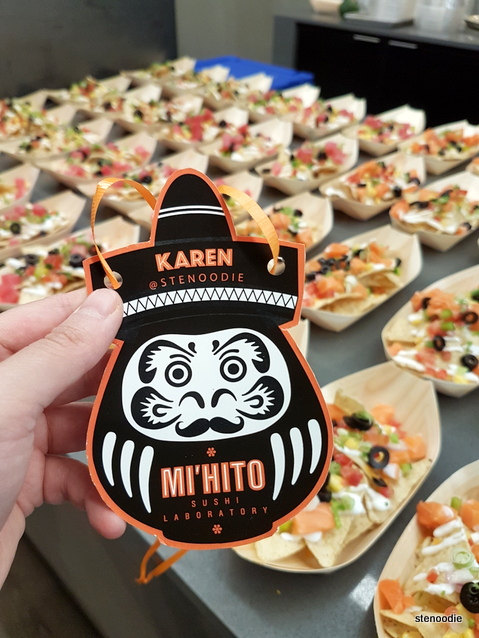 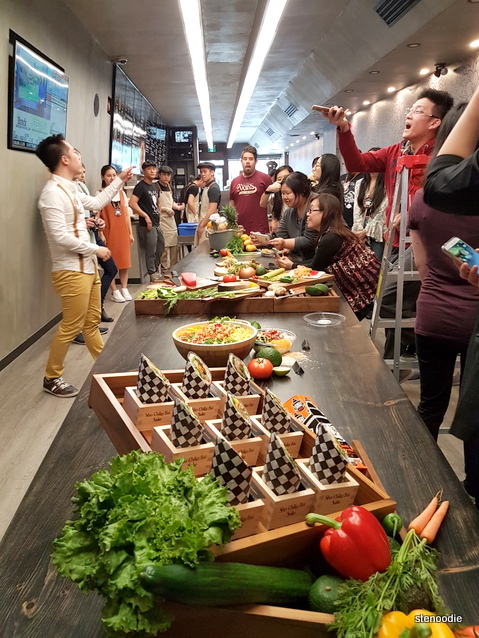 To kick off the media tasting, Darren welcomed us to the event and did a quick explanation and introduction of what Mi’hito Sushi Laboratory was all about.  Apparently — apparently — Mi’hito Sushi Laboratory was the “first” one to introduce sushi burritos to Toronto — Darren’s words, not mine.  XD  That night, they were going to have a poke bowl making contest to see which Instagrammer would make the best poke bowl most deserving of the owner’s taste (two winners would be picked out of two) and that we were going to be able to try anything off of the menu of our choice.  We had two rounds in which to do this.  I was absolutely excited to be able to do this and was very thankful that they were so generous to allow us to order anything we wanted (in two rounds too)!

First though, the sushi nachos were ready for us (the kitchen staff had been prepping these for us since I walked in) — they looked so gorgeous.  We were able to try them.  I’m glad that I was able to share the sushi nachos with Joanne and Nancy.  There were three types of sushi nachos being offered for us to try; these were the salmon, tuna, and lobster sushi nachos. 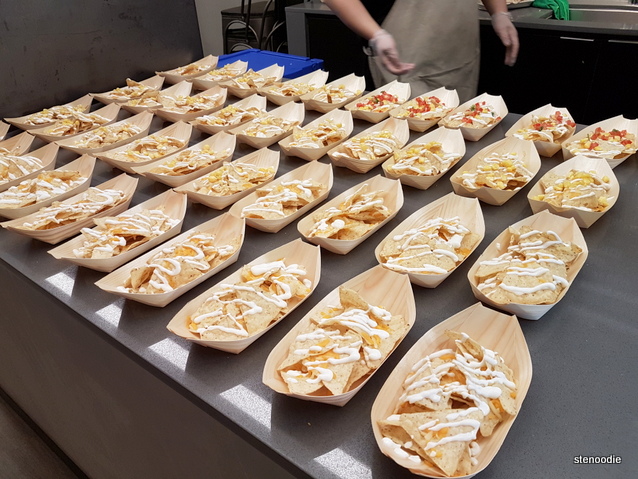 The sushi nachos being prepared for us en masse 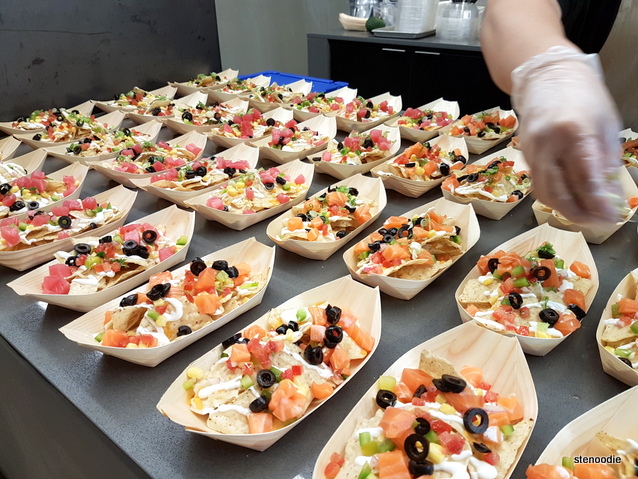 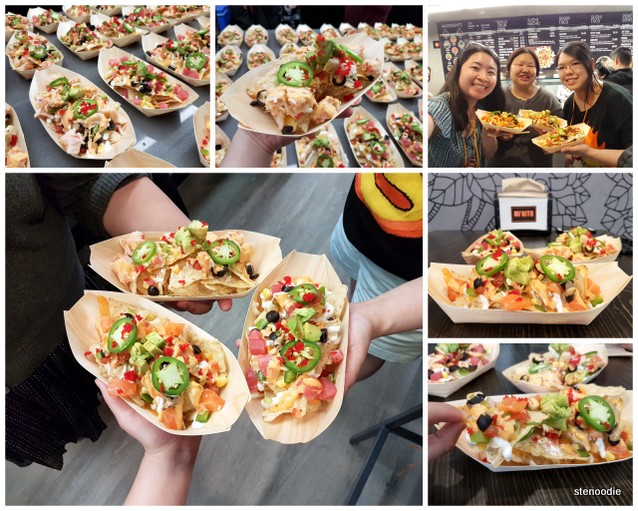 This was so aesthetically pleasing to the eye! Sushi nachos galore! 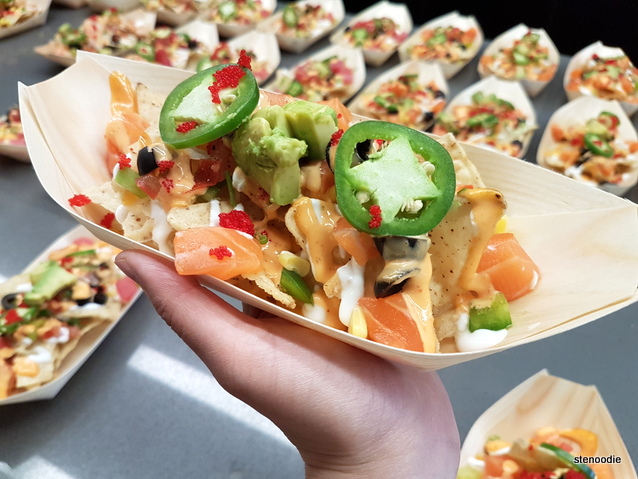 I remember really enjoying the lobster sushi nachos and wish there were more lobster meat in the nachos as it was very deliciously seasoned.  The salmon one was good as well as the tuna sushi nachos but definitely the lobster one stood out most in terms of taste.  This was an interesting way to serve a fusion of sushi ingredients in nachos format too. 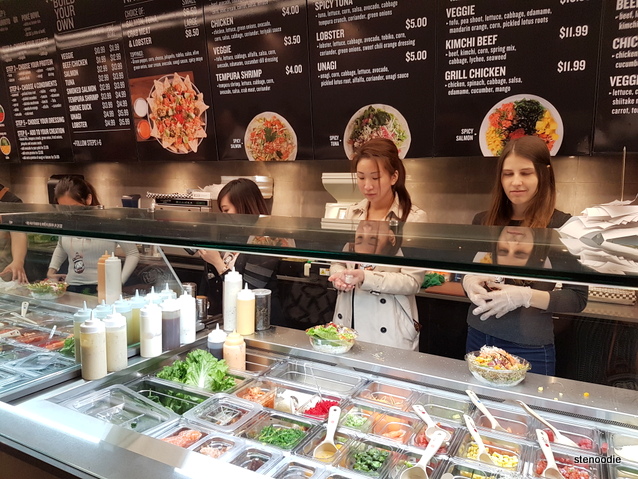 At this time, the poke bowl making contest also began.  This was a voluntary contest and four Instagrammers immediately were up for the challenge.  Since the three of us were busy trying out the sushi nachos, we actually didn’t pay much attention to this although it looked and sounded so fun.  I did capture a photo of the four Instagrammers as they made their poke bowls.  (The two winners won a $50 gift card to return back to the restaurant if I remember correctly.)

Then, before the line-ups started, the three of us placed our orders to try an item for our first round of food.  Although I’ve had sushi burritos before at another competitor (blogged here), I wanted to try how Mi’hito Sushi made theirs.  I ordered the Lobster Roll sushi burrito.  This had lobster meat, arugula, cabbage, corn, tobiko, avocado, sweety drop pepper, and sweet chili orange dressing. 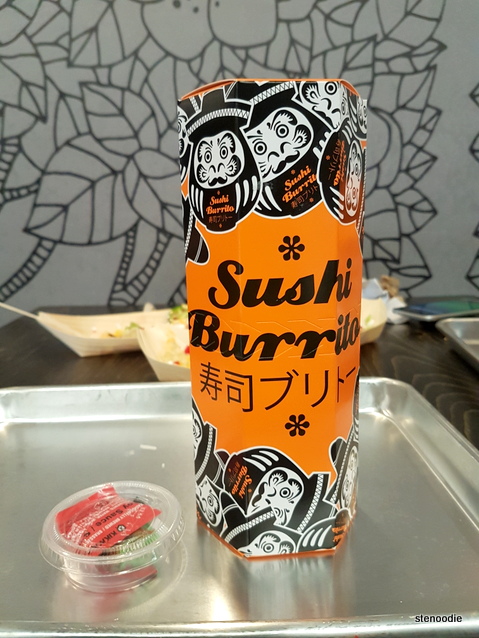 I really enjoyed my Lobster Roll!  I liked how it had arugula in it and that there wasn’t too much rice.  (I spotted how they made their sushi burritos on the counter — they use a machine to mechanically flatten out the rice on a piece of seaweed; it’s not done by hand which explains why it looked so perfectly made.)  I liked the combination of ingredients in the Lobster Roll too.  However, I do have to say that the “lobster meat” was more crab meat and salad than actual lobster meat…  it still tasted good but I don’t think this was a true Lobster Roll sushi burrito. 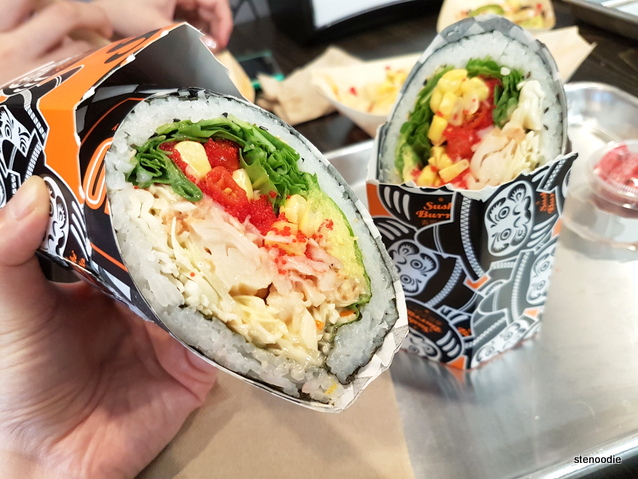 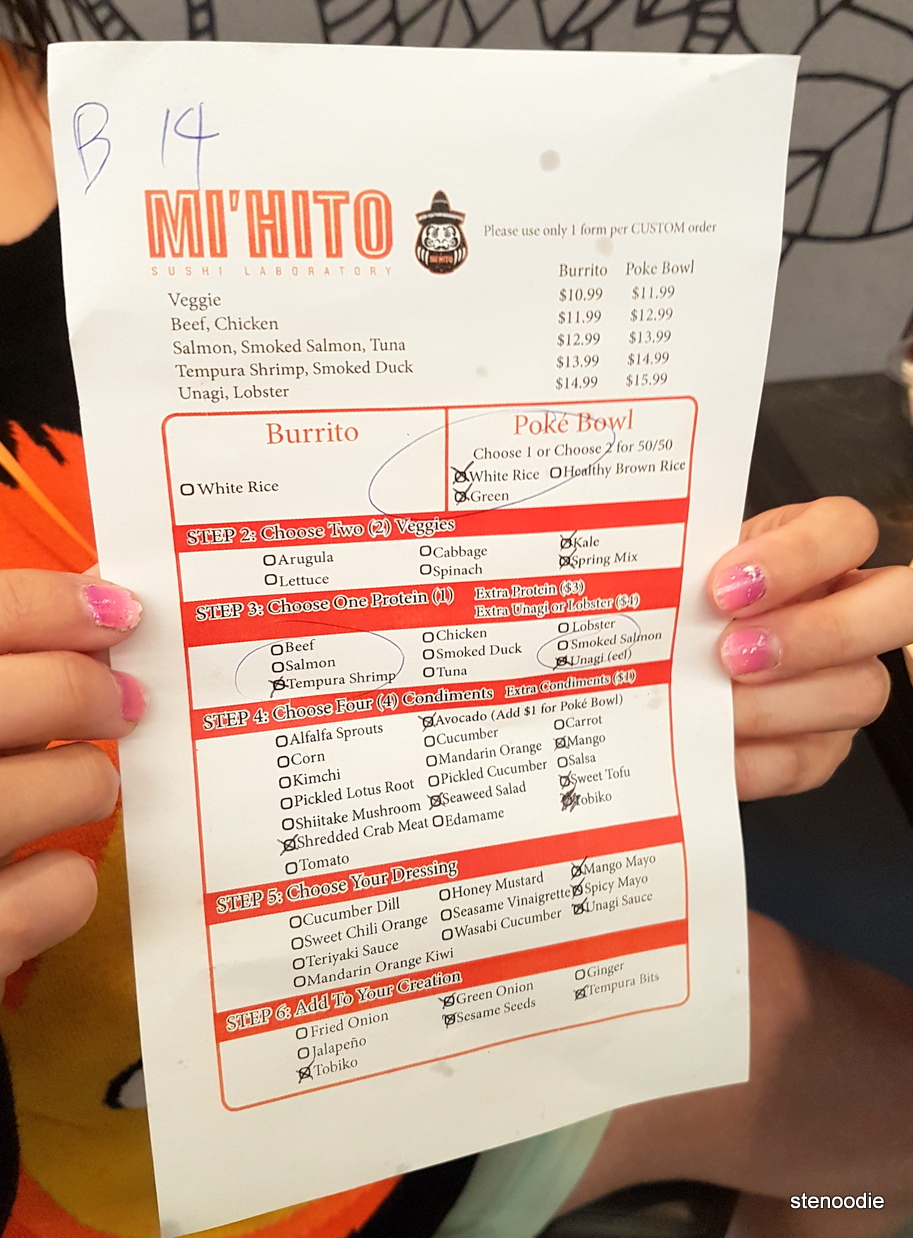 Joanne ordered the customized poke bowl.  There was a sheet of paper for you to fill out the specific items you wanted in it.  You could choose the type of rice (or greens), protein, 4 condiments, dressing, and toppings.  It was a very extensive list and I was very impressed with what Mi’hito Sushi Laboratory offered for their customized poke bowls (as well as sushi burritos actually).

Joanne ordered a medley of really amazing dressings and toppings with tempura shrimp and unagi on white rice plus greens.  It was a genius move as she was able to share her customized poke bowl creation with me and Nancy.  We were able to share this giant poke bowl of such delicious ingredients!  The poke bowl was huge!  I really liked the unagi and the tempura shrimp.  This was probably one of the most impressive and varied poke bowl I’ve ever had.  I definitely wouldn’t be able to finish it if I was eating it myself. 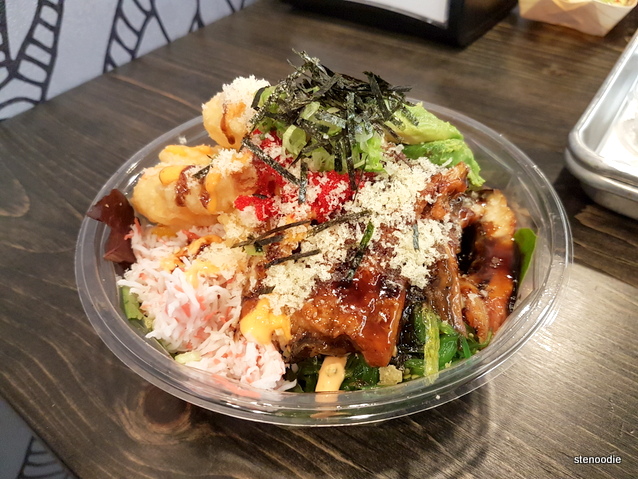 Build Your Own Poke Bowl by Joanne 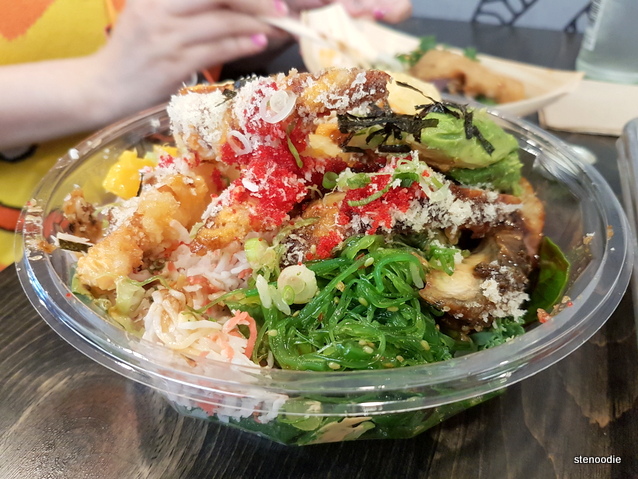 We were also treated to any drinks in their fridge (this was so generous).  They had a line of drinks that I had never seen before called Fentimans of botanically brewed and traditional drinks.  We were each open to “take” one from the cashiers who were so generous and friendly about it all.  The drinks were unique and good! 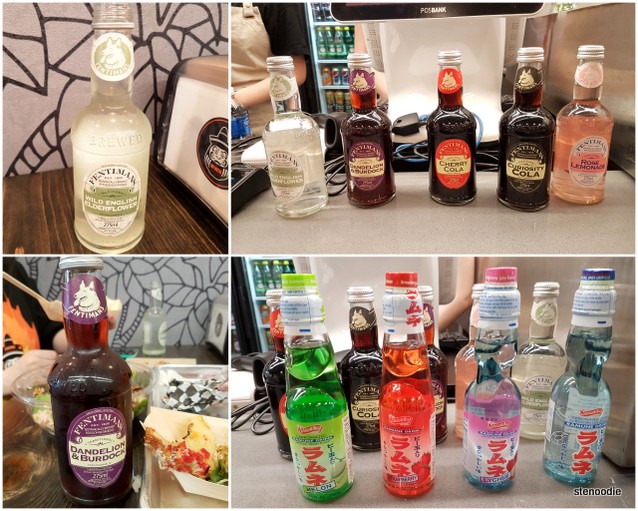 The media tasting was soon winding down for the night and Darren informed us that we could order our second round of food before the restaurant was open again to the general public at 8 p.m.  Thus, I decided to order another sushi burrito and take it to-go this time.  I ordered the Spicy Samurai Duck for Ken since he liked that one after seeing a photo of the menu.  Thus, unfortunately I didn’t get to try the Duck Sushi Burrito for myself but I heard from so many people afterwards that it was really good.  Next time, I will keep one half for myself to try too! 😛  I also was able to nab another drink for Ken as well.  Like I said, this was a very generous tasting event and I wasn’t the only one who benefited like this either.  Thank you so much! 😀

(I also didn’t even finish my second half of the Lobster Roll Sushi Burrito since I was so full already and gave that to Ken too.) 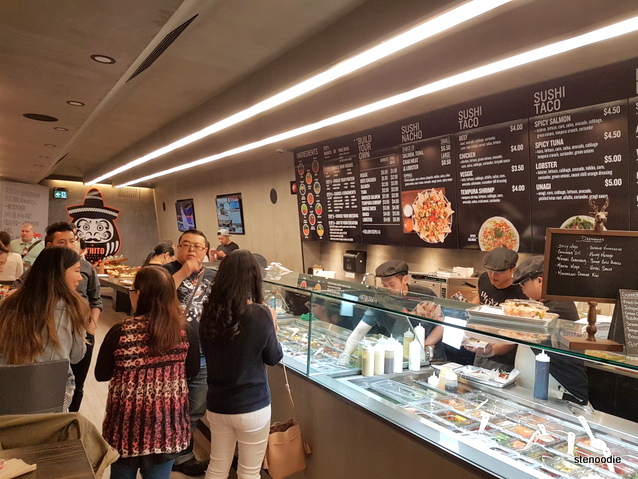 Thank you once more to Darren for organizing the amazing generous media tasting and to Mi’hito Sushi Laboratory for the wonderful hospitality and fresh, delicious food!  I really think they have a lot of potential to attract a solid customer base (they actually have a first location in Mississauga!). 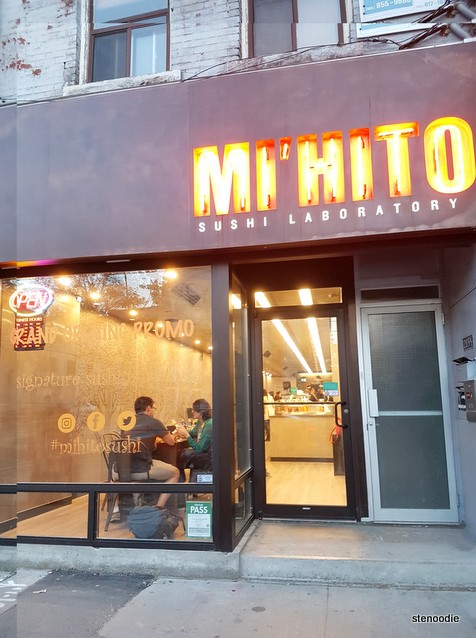 Another shot from the outside as it was getting dark

FTC Disclaimer:  Although DKLoEvents and Mi’hito Sushi Laboratory invited me to a complimentary tasting, the opinions expressed here represent my own and not those of the companies.