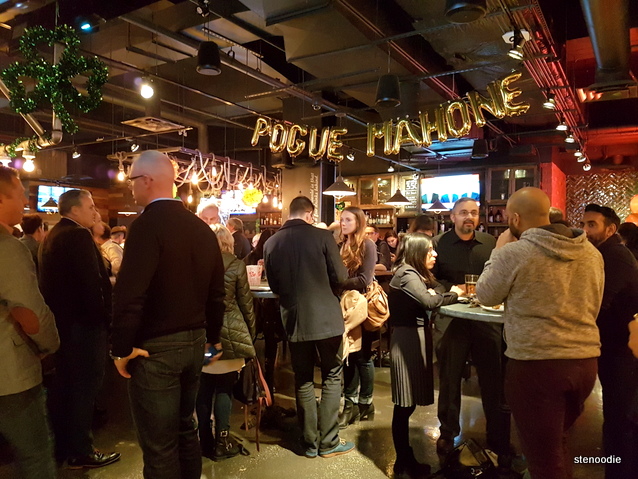 The Grand Opening Party of Pogue Mahone Pub and Kitchen at 777 Bay Street in downtown Toronto last night was a huge success!  Thank you to Fab Restaurant Concepts for inviting me to the newly renovated space last night in order to partake in the opening festivities!

On the itinerary for the night, there were complimentary snacks (Pogue Mahone Pub and Kitchen brought out their best finger food out in endless rounds to satisfy the guests) and drinks (beer and spirits vendors lined the restaurant in booths to allow guests to sample their offerings), live music, and giveaways!  The event began at 6 p.m. and although when I arrived exactly on the dot at 6 p.m., it seemed like the party was already in full swing when I got there so it must have begun even earlier than the slated time. 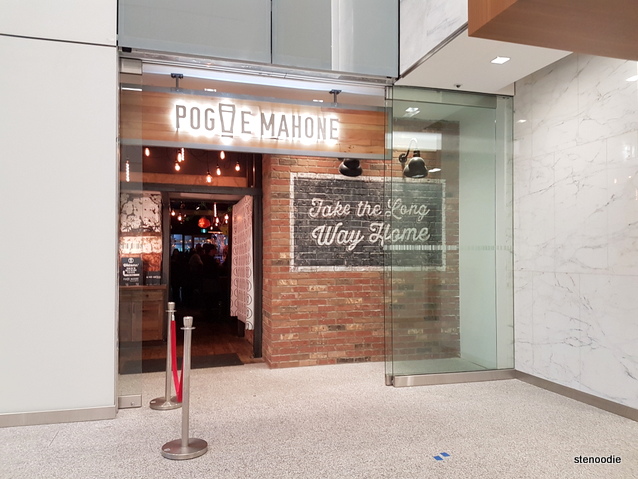 Entrance to Pogue Mahone from the 777 Bay Street building

Upon arrival, I checked in with the hostesses at the front of the room and received a raffle ticket for the raffle draw that was held later in the night.  From then on, it was a free for all to explore the Irish pub space to mix and mingle and enjoy the food and drinks. 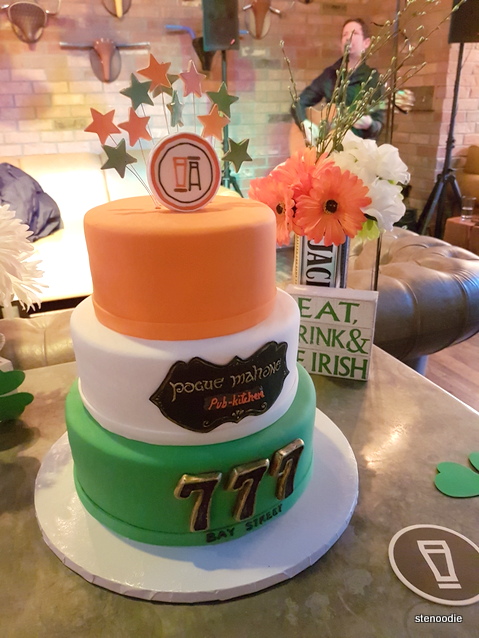 Gorgeous celebration cake at the party 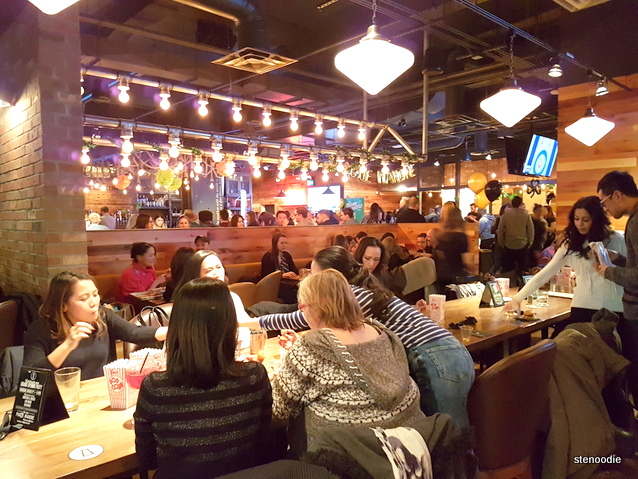 I tried the snacks that they were offering that night which included chicken and vegetable potstickers, fried chicken sliders, fish tacos, Smashed Avocado Toast, and fish & chips.  Each one was quite good and I especially liked the Grilled Fish Tacos and potstickers.  It was such delicious pub food!  The kitchen was generous to keep pumping out these samples too and we didn’t have to wait too long for another helping if we wanted it. 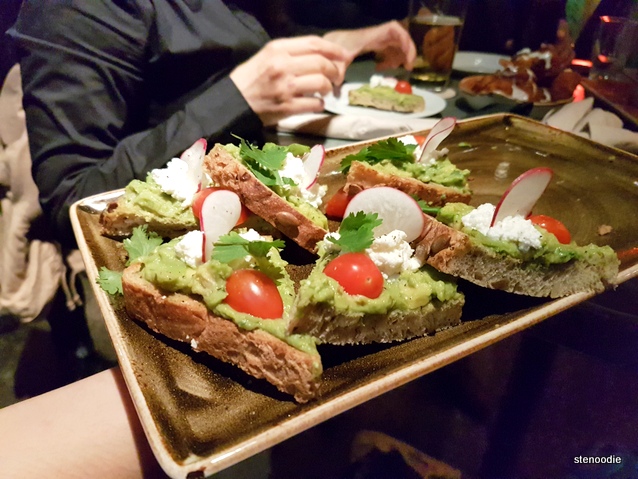 Platters of food being served generously by the servers 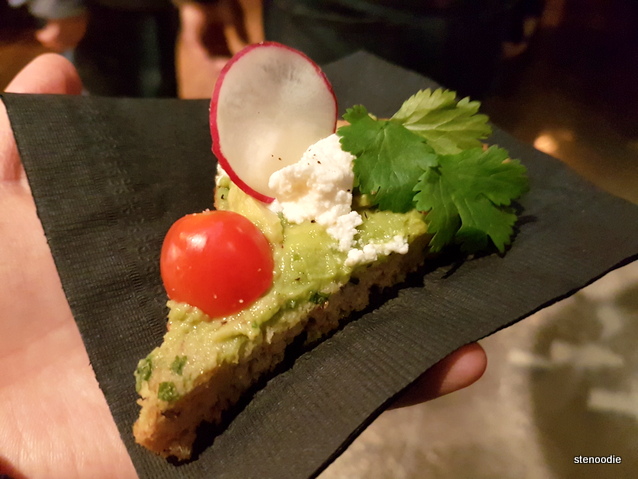 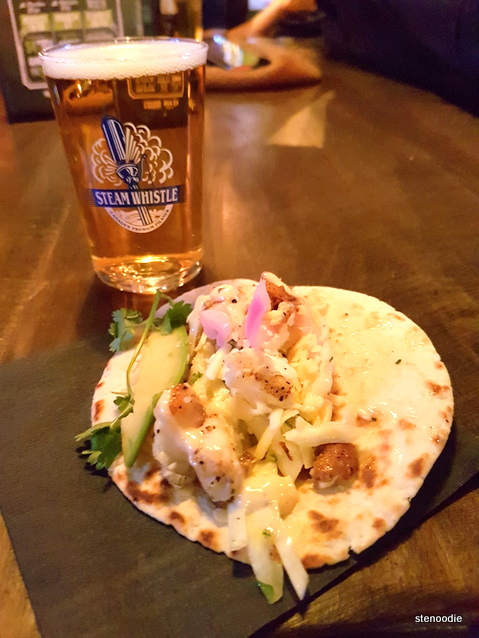 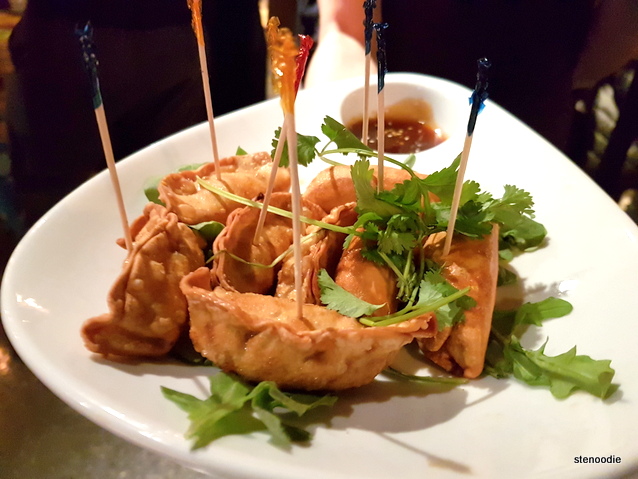 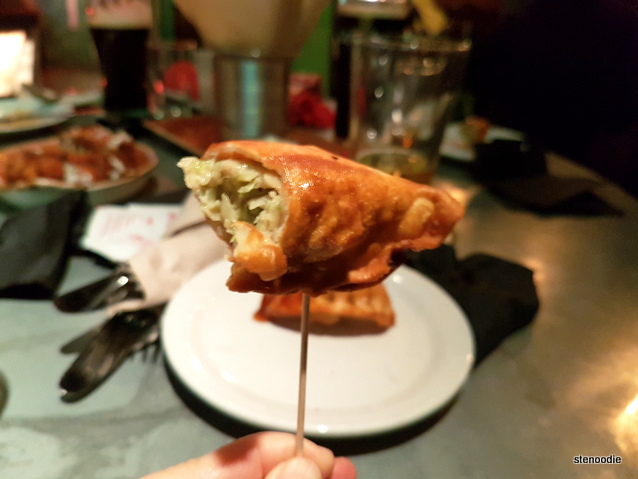 This chicken and vegetable potsticker was so plump and juicy! Loved it 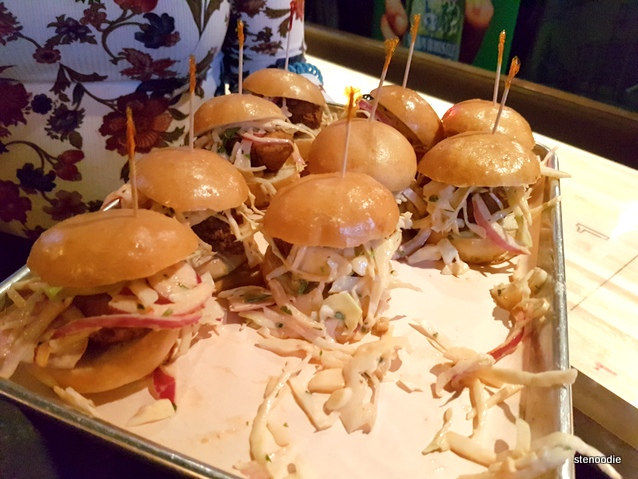 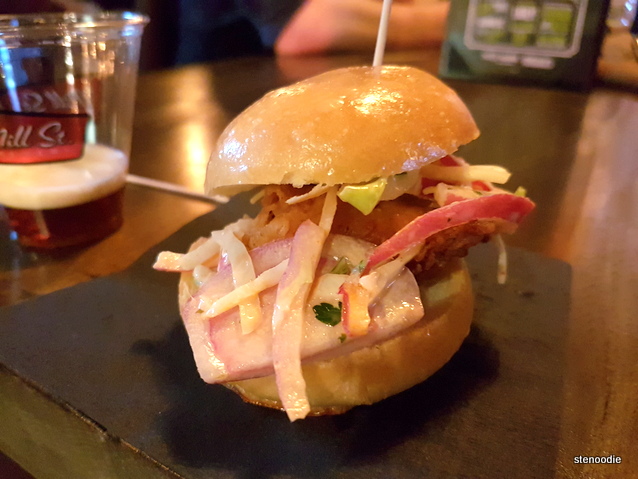 Yummy! The onions were such a nice touch 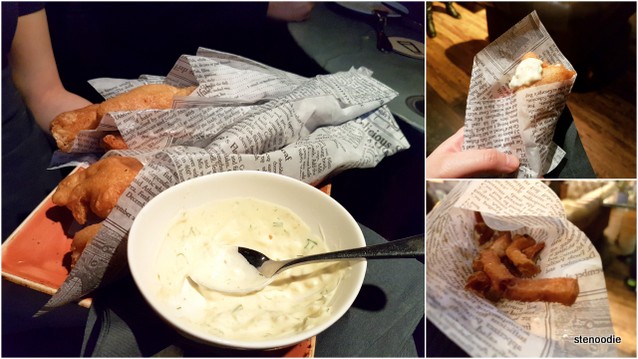 I tried a couple of beers and spirits from the vendors that were there that night.  This included beers from Mill Street Brewery, Steam Whistle, Collingwood Brewery, and whiskey from Jack Daniel’s.  The sample size drinks were perfect for me to try each one! 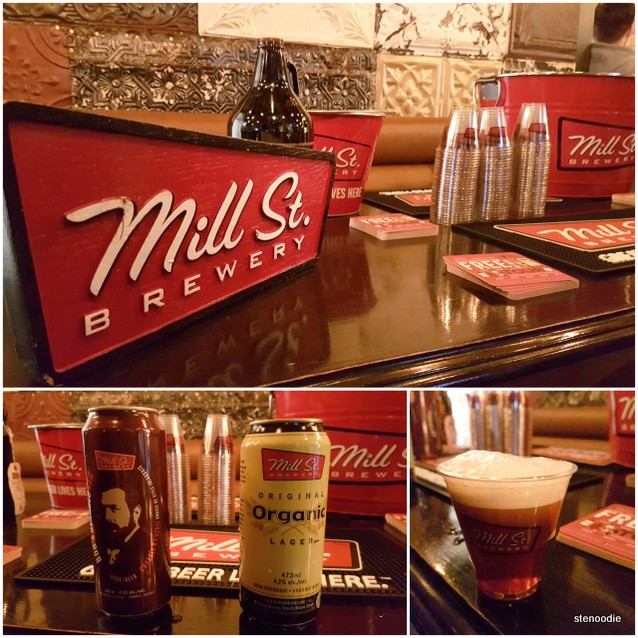 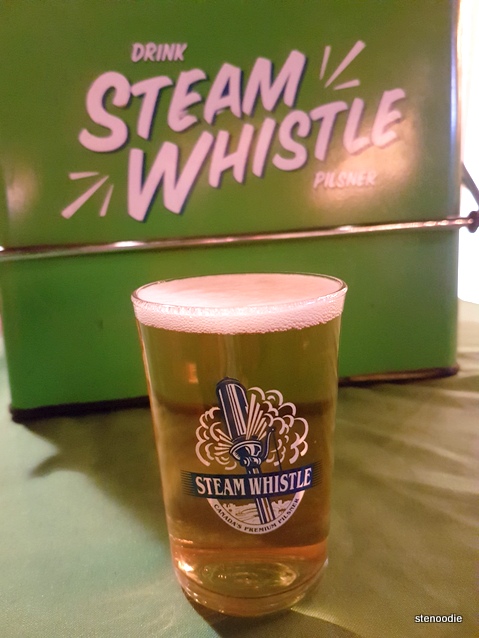 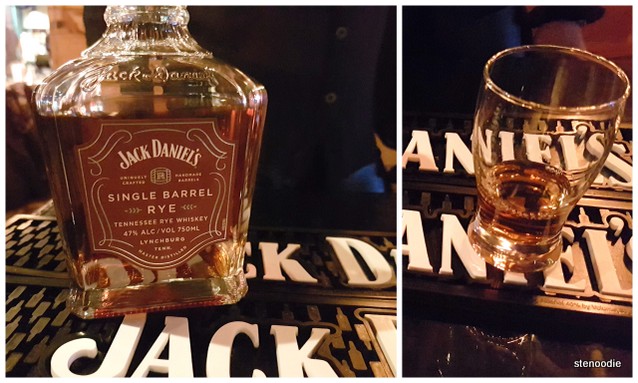 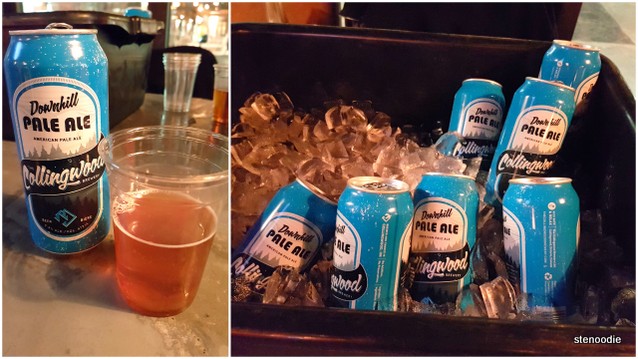 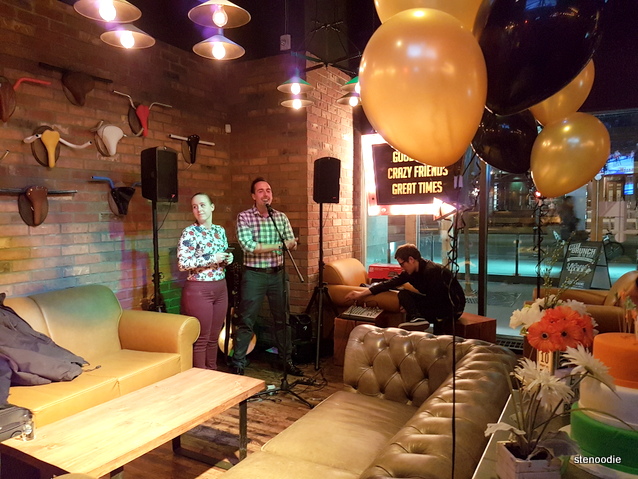 At 7 p.m., the hosts of the party made a short announcement and also announced the winner of the $50 gift card raffle prize to the restaurant.  After this, they cut the party cake and gave a slice to those in attendance.  Within the thick orange, white, and green colours of the fondant, it was a rich and dense chocolate cake underneath.  The chocolate cake was really good and not too sweet either!  Yummy :). 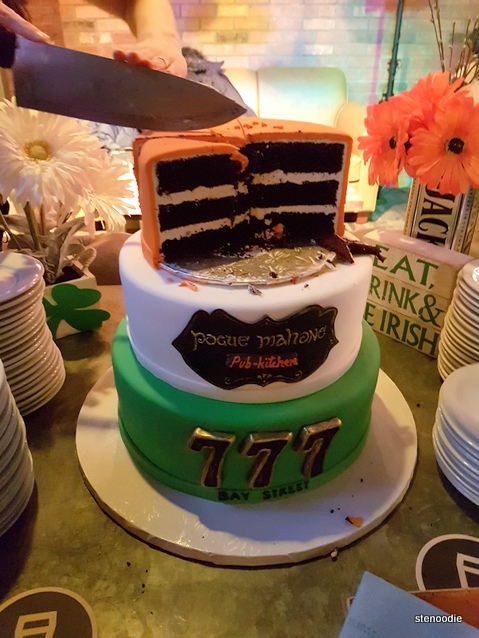 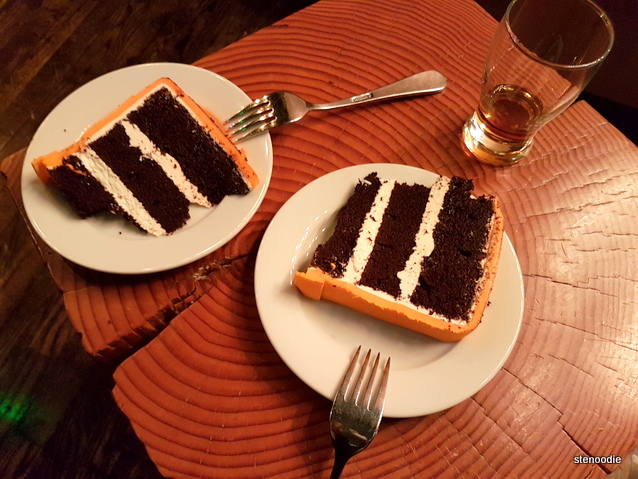 In addition to the musician that was playing live music, there was also a self-serve popcorn machine where you could create your own perfect box of popped corn with desired seasonings and butter. 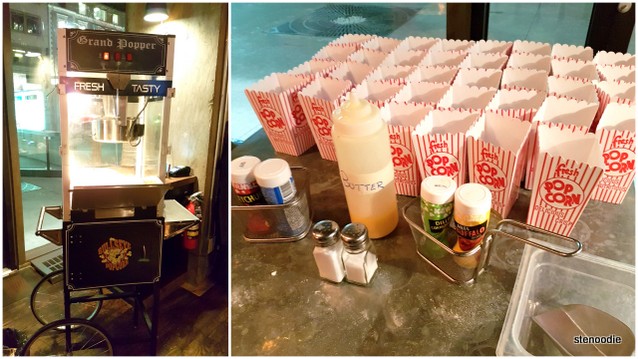 I really enjoyed my time at the Grand Opening Party of Pogue Mahone Pub and Kitchen! They were also thoughtful and generous to provide each guest with a goodie bag containing a Mill Street Brewery shot glass (it was so cute), a Mill Street Brewery bottle opener, a credit card case to stick on your phone, as well as several vouchers for discounted meals to bring your friends to back to Pogue Mahone Pub and Kitchen. 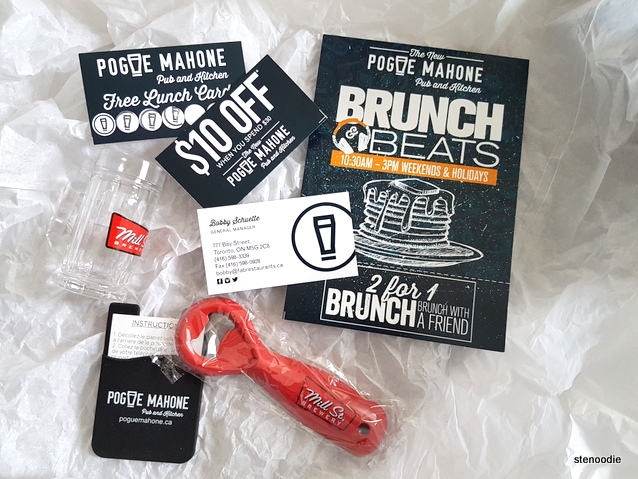 Thank you for these freebies! ^_^ 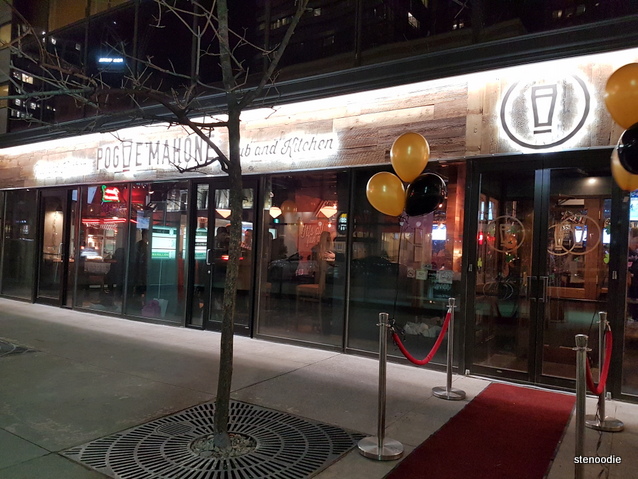 The party was slated to go until 9 p.m. and it was still in full swing when I left around 8 p.m.  I wish Pogue Mahone Pub and Kitchen all the best and I’m excited to return to their restaurant for some brunch on the weekend!

FTC Disclaimer:  Although Pogue Mahone Pub and Kitchen reached out and invited me to a complimentary tasting, the opinions expressed here represent my own and not those of the company.