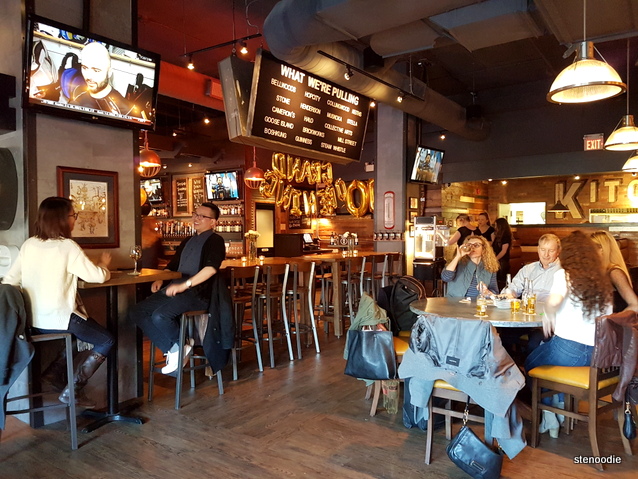 Mandy and I attended this Grand Opening Party hosted by the pub care of FAB Restaurant Concepts.  I had attended the re-opening event of another location that they had last month at Pogue Mahone and their menus currently are the same throughout all of their locations. 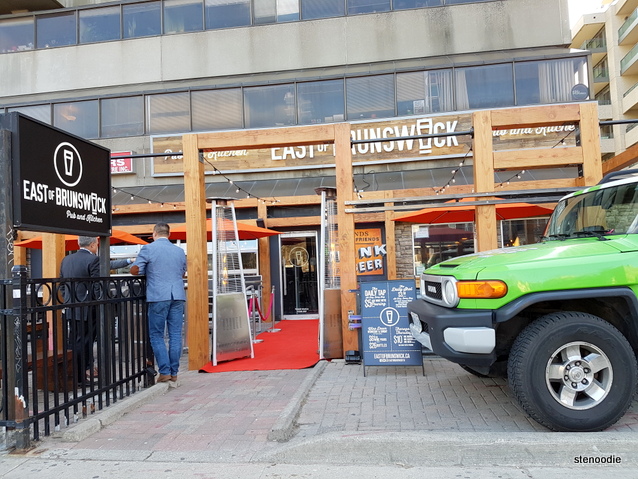 Thus, just like last time, there were beer and liquor stations set up throughout the restaurant with appetizers and samplers being served to the guests in attendance.  There was also a DJ spinning live music and a raffle draw. 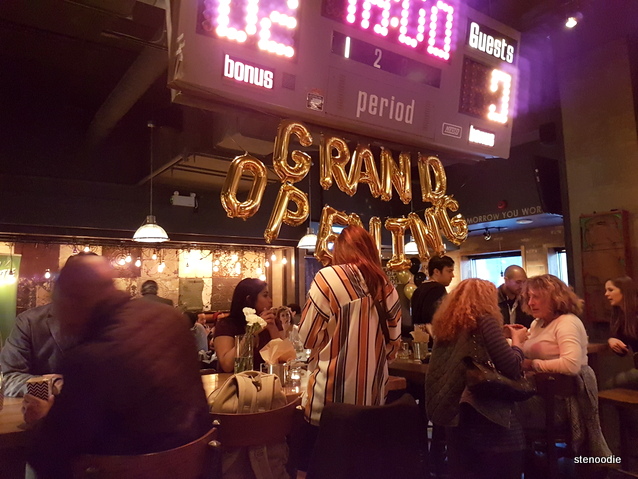 I was there right at 6 p.m. on the dot and guests were just arriving at this time.  The appetizers started coming out of the kitchen slowly around 6:20 p.m. and ebbed and flowed until when we left just before 9 p.m.  I really enjoyed the constant flow of unlimited food coming out of the kitchen from start to finish last time. XD  However, the food tasted as delicious as last time. 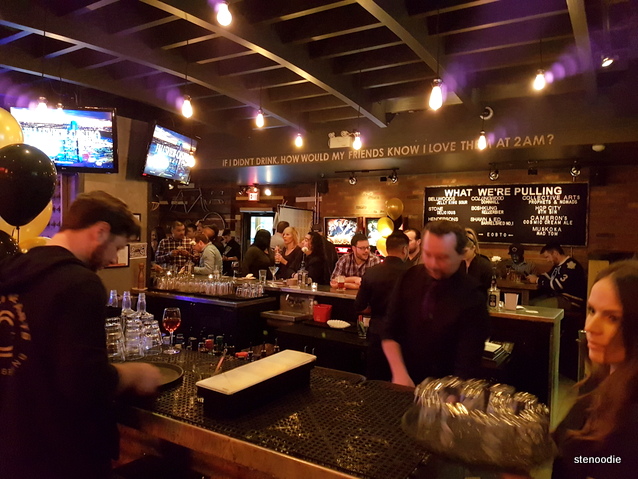 A large bar counter and lots of seating

East of Brunswick has pinball and shuffleboard games available as well as numerous flat-screen TVs around the pub for the perfect venue to enjoy drinks and food while watching the game (like when the Leafs were playing last night).

The variety of drinks was fantastic this time as I got to try the beer from Steam Whistle again, the tarty beer with lychee from Collective Arts, beer from Henderson, and the Chardonnay from Peller.  Jack Daniels was also on site again but I didn’t sample them this time.

I love the light beer from Steam Whistle. 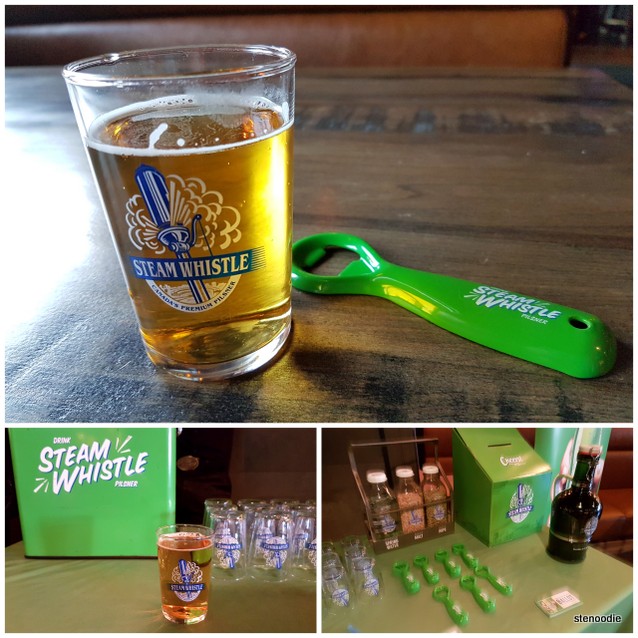 This Collective Arts Brewing beer was introduced to us.  The art on their coasters and cans are all done by hand by local artists.  This one was a sour and tarty beer that had lychee in it.  Mandy really enjoyed it! 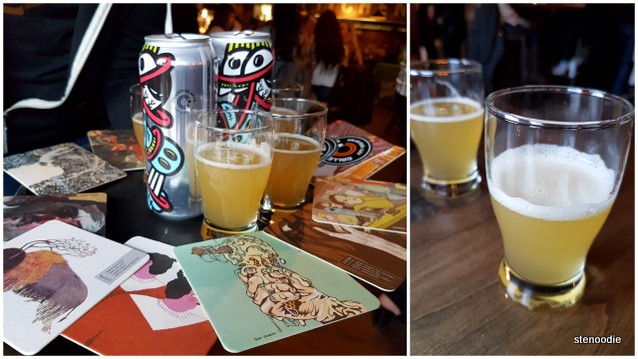 I really liked the Chardonnay from Peller Estates.  It was very smooth and slightly sweet. 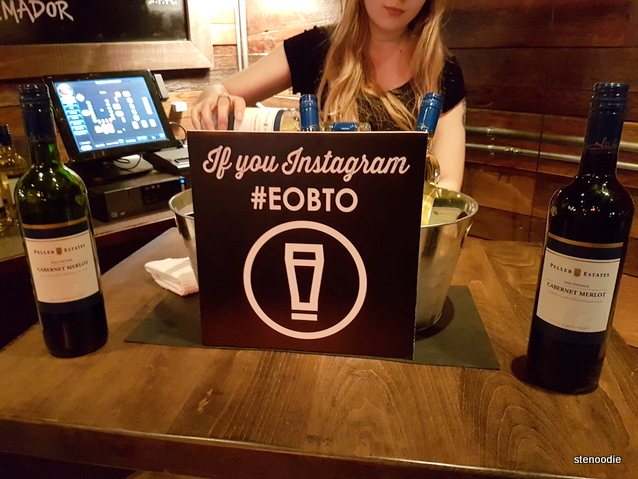 Trying out the Chardonnay from Peller Estates

The stout from Henderson Brewery was heavier than the other beers we had had so far but it was still a good rich beer. 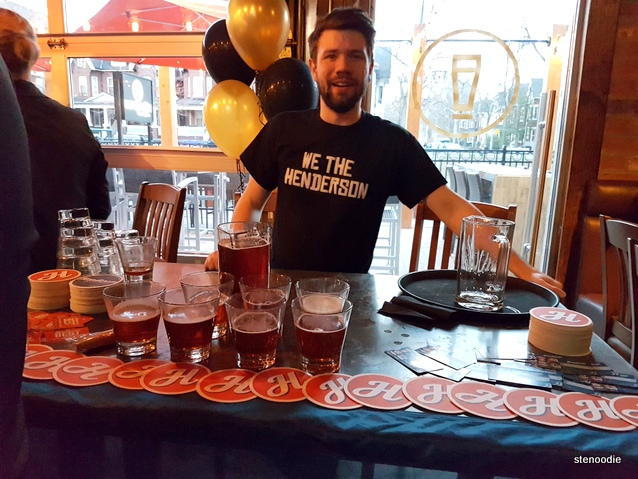 Here are the foods we sampled last night:

The popcorn machine was out again in full force!  This time, I enjoyed the warm kernels with some toppings as well.  The white cheddar topping was really good. :9 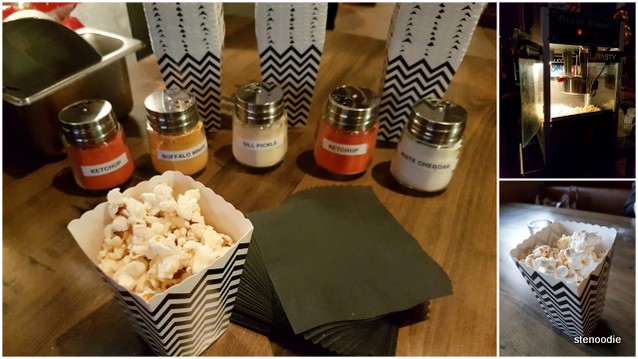 I had tried the Grilled Fish Taco from last time’s party and really enjoyed it.  This time, however, it was even more delicious than last time!  There was a subtle kick of heat from the chipotle aioli that tied everything together so well.  The soft tortilla was delicious too. 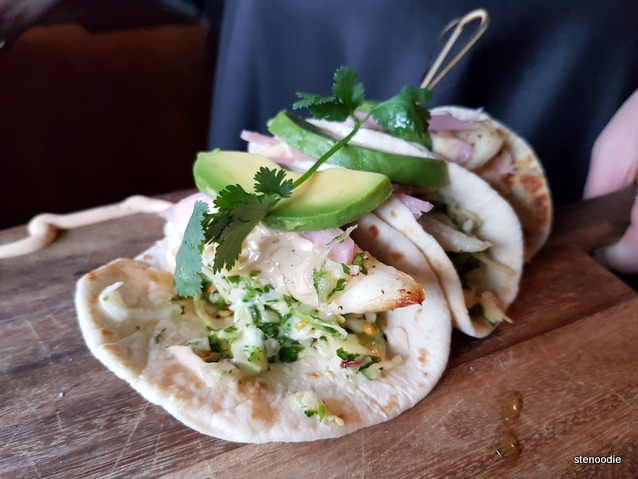 Their Smashed Avocado Toast was just as delicious as last time and there seemed to be extra parsley on top of the toast too that made it taste even better.  I especially liked how this was multi-grain — you could taste the grains in each bite. 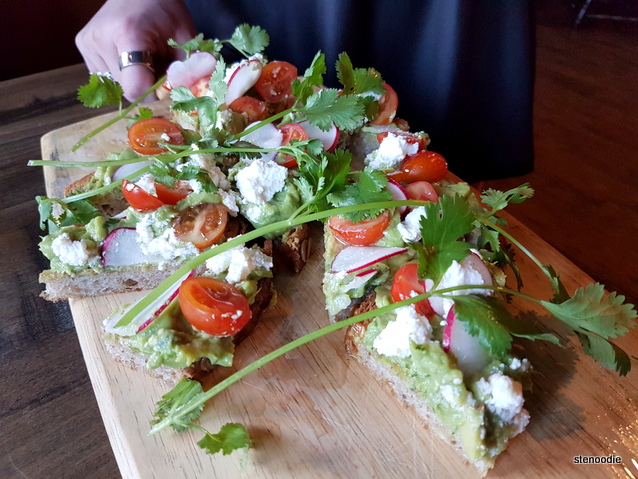 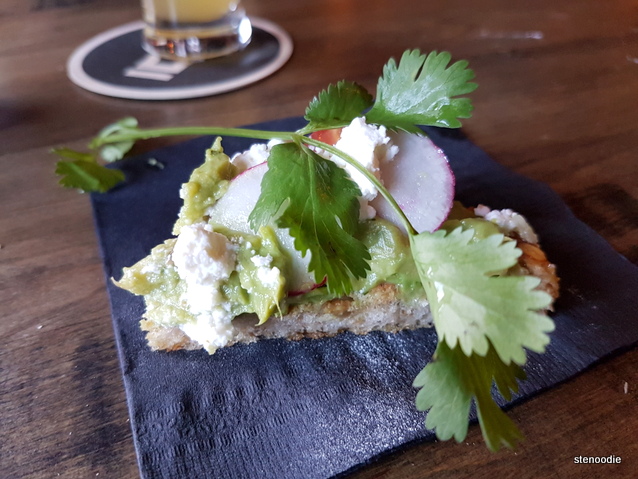 The Buffalo Cauliflower Bites were so delicious!  This was my first time trying them and the sauce and dill ranch drizzle made this sinfully delicious. 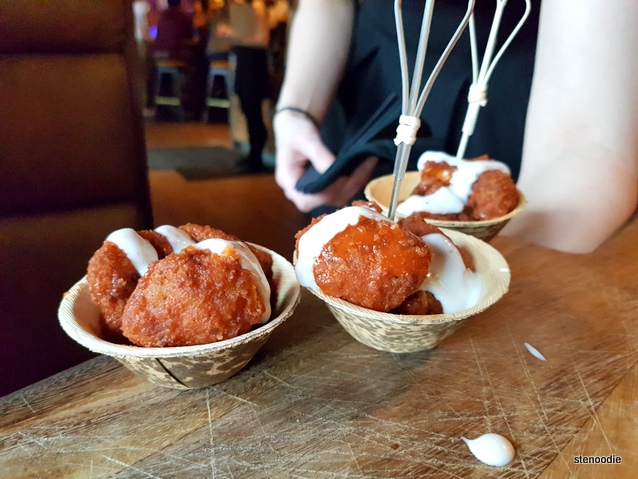 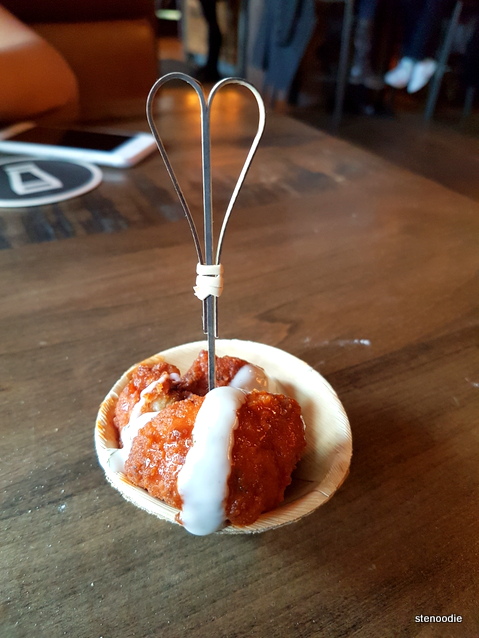 The Tiki Pork Taco was really delicious as well!  It was my first time trying this. 🙂 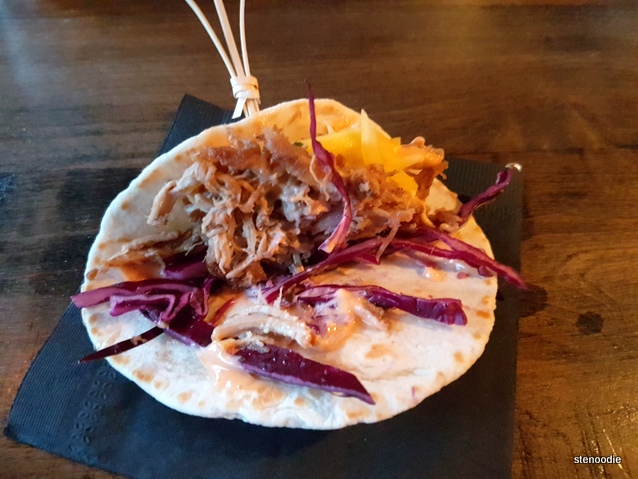 The Straight Up Burger was indeed “straight up” all burger and was decent. 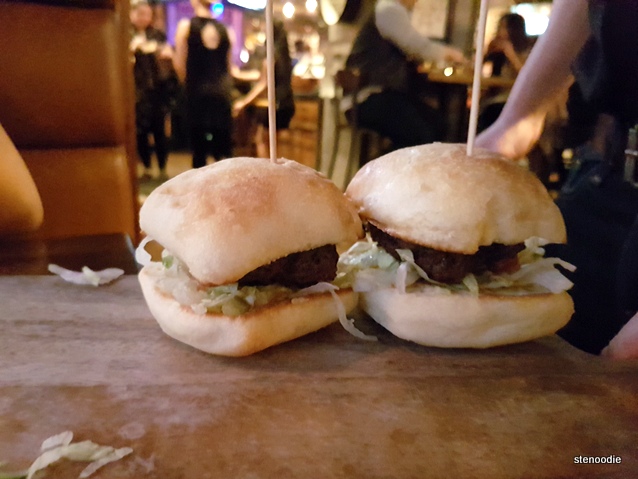 I observed that Fish & Chips were being served too but we didn’t get a chance to try them before they were all already handed out.  As well, I think there were some Chicken Baos served as well. XD

The food really was all very delicious!  I don’t know if we left before dessert was served but Mandy and I were thinking that something sweet to finish off the night would have tied everything up so nicely! 🙂

Also, like last time, we left with a party bag full of goodies. 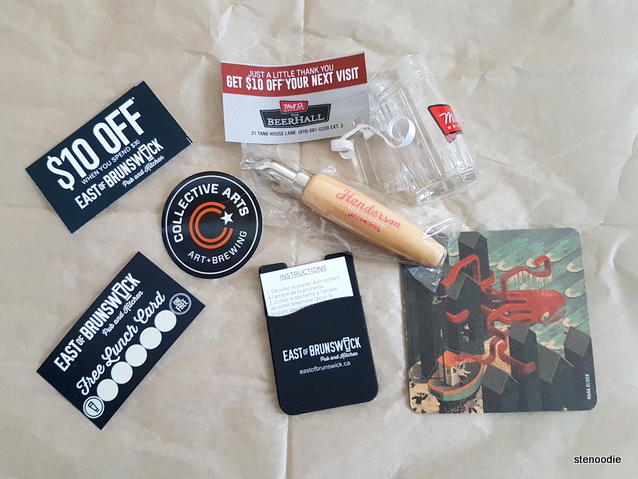 Vouchers and swag from East of Brunswick

All in all, despite the slow food service at the beginning of the event, we wound up having sampled quite a lot of food and drinks by the end of the night and had a great time.  Thank you again, FAB Restaurant Concepts and East of Brunswick Pub and Kitchen, for having us! 🙂

FTC Disclaimer:  Although East of Brunswick Pub and Kitchen reached out and invited me to a complimentary tasting, the opinions expressed here represent my own and not those of the company.