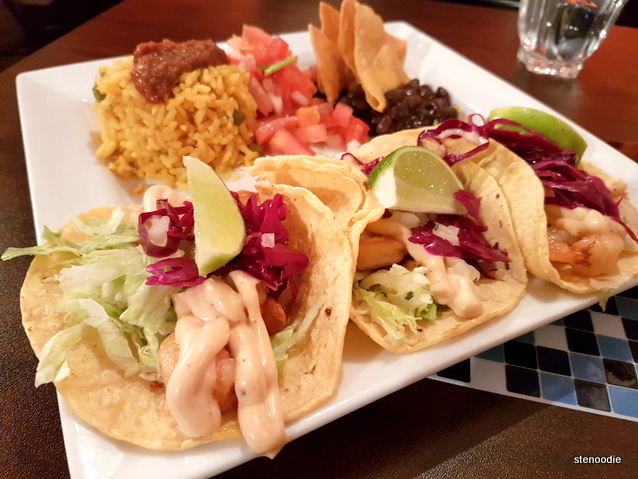 Last night, Ken and I went to dinner at Planeta Mexico in Markham.  By its name, it’s clearly a Mexican restaurant and an “authentic Mexican cuisine” at that!  I had heard about this restaurant from my friend Angel who raved about it on her social media feed.  Thus, when I had passed by this restaurant when walking by on Main Street Unionville previously, I had always been intrigued to check it out.  (I also noticed that they have low to moderate ratings on Yelp so it seemed that opinions were mixed here.) 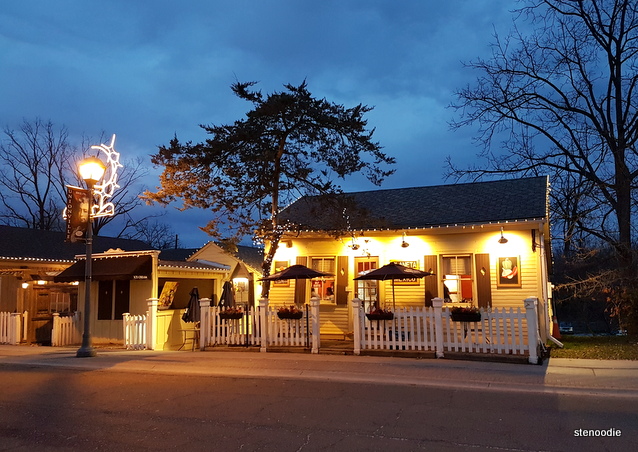 Such a nice little restaurant venue! 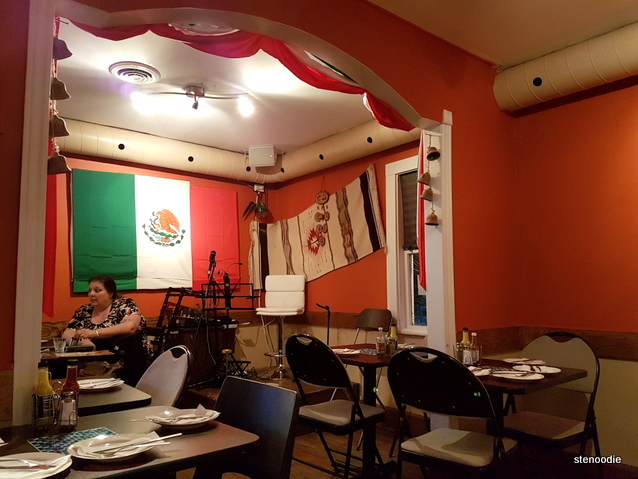 Cute interior with a small stage for a performer!

In any case, I tried to keep an open mind before stepping into this restaurant.  I found that its exterior was incredibly cute!  It fit in with the other historic buildings and shops on Main Street Unionville and the restaurant was housed inside a little house that looked like a village home.  Walking inside, it was incredibly homey and right away I could smell the aroma of the Mexican food and hear Spanish music as well.  All around the room, there were bells, paintings, and other decor that were Mexican-inspired.

We were seated inside the restaurant at a table that had a perfect view of the performer’s area too.  I was pleasantly surprised that such a small restaurant would have a stage for someone to play live music.  Alas, this wasn’t a night of scheduled performances so the stage was left empty. 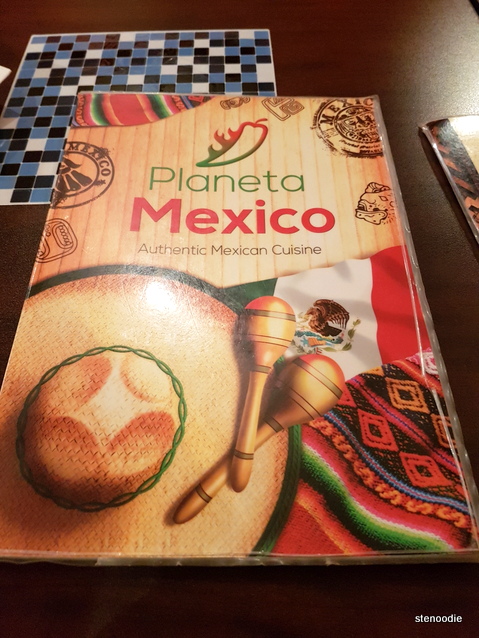 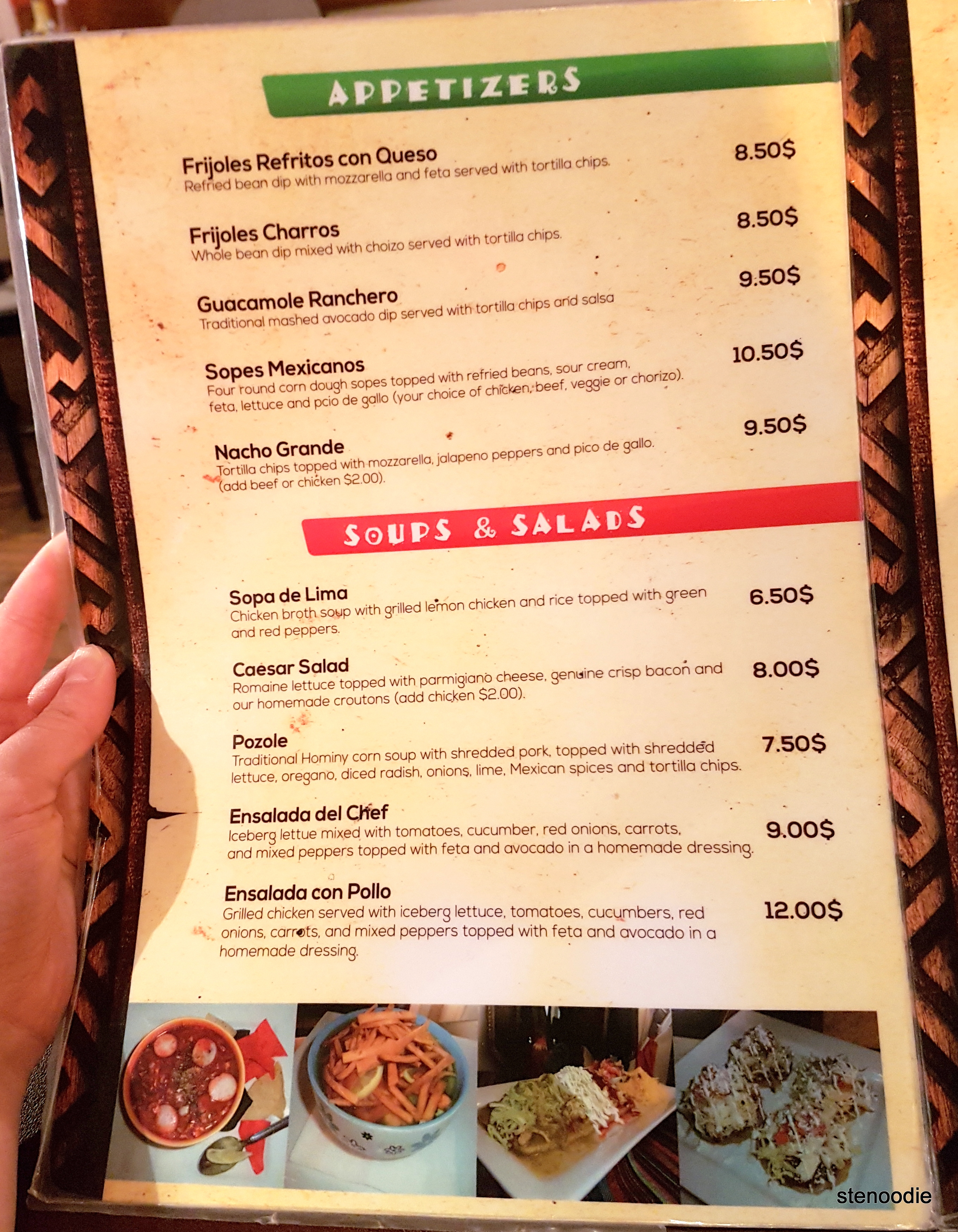 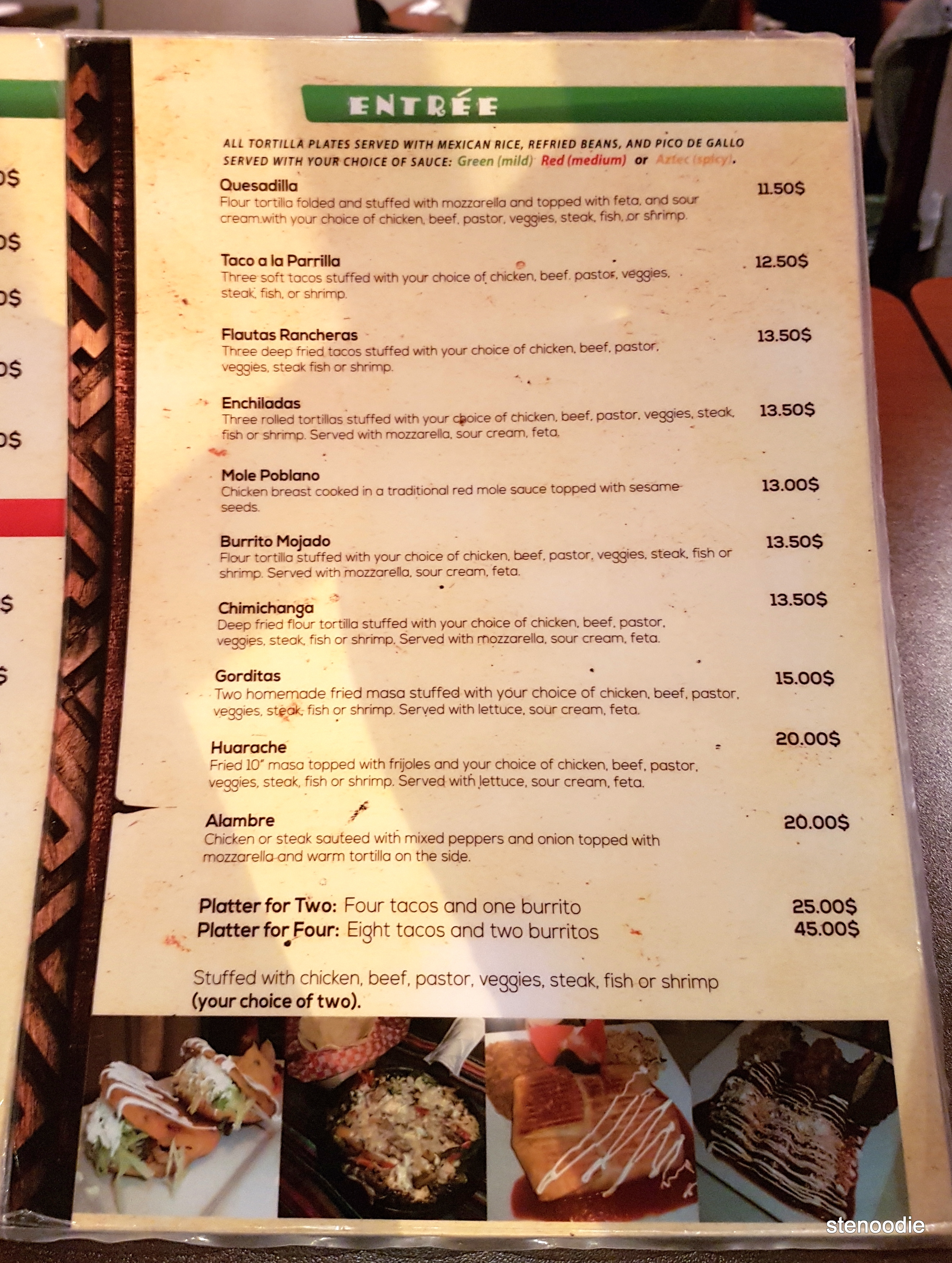 We ordered three items to share.  I was curious to see what the food would be like.  The menu seemed to be full of authentic Mexican dishes for sure! 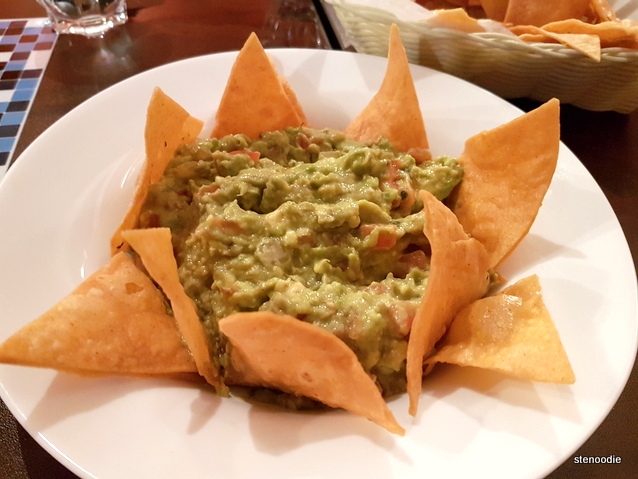 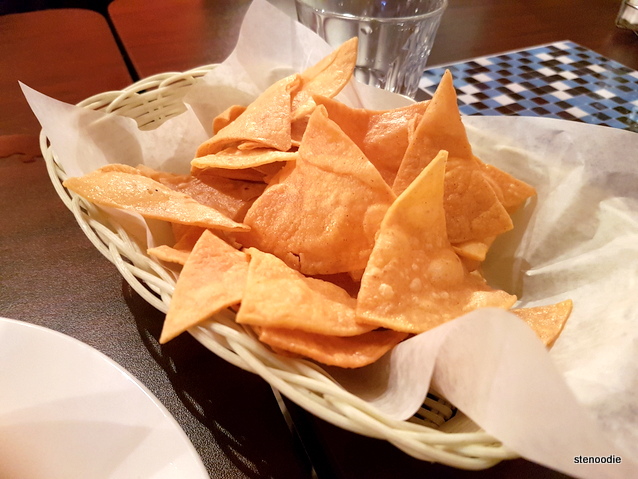 Maybe because I don’t eat enough authentic Mexican food (non-commercialized Mexican food) but I felt that this Guacamole Ranchero was a little too sour for my taste.  There was a lot of tomatoes, lemon juice, and onions in it for sure and they sure didn’t skimp out on the avocado either.  The tortilla chips were extremely crunchy and crispy. 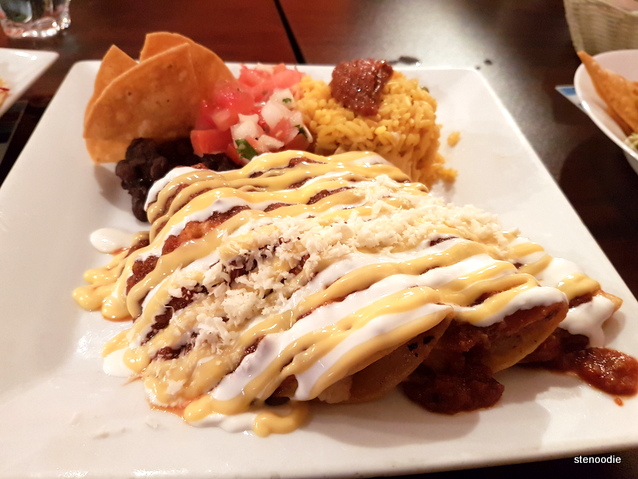 I chose the Enchiladas.  All of their entrées were served with Mexican rice, refried beans, and pico de gallo with a choice of green (mild), red (medium), or aztec (spicy) sauce.  I chose medium heat for my sauce.  The Enchiladas included three rolled tortillas stuffed with a choice of chicken, beef, pastor, veggies, steak, fish, or shrimp.  It was served with mozzarella, sour cream, and feta.  For my order, I chose fish (actually… who chooses fish for Enchiladas at a Mexican restaurant…  I should have gotten steak or chicken instead XD).  The red sauce turned out to be a little spicy, with the heat lingering for a little while after the first bite.

I liked the look of this entrée!  I especially liked how there was a small sample each of Mexican rice, refried beans, and pico de gallo on the side.  The refried beans were pretty good.  I especially liked how there were a few tortilla chips stuck into the refried beans which not only made its presentation a nice one but also the chips were thus warmed up and less crunchy as a result (the chips were actually too crunchy for my taste).  The tomatoes in the pico de gallo were fresh.  I found that the Enchiladas were a little soggy especially with the already soggy-tasting fish inside the rolled tortilla.  Otherwise, I did like the mozzarella and sour cream on top of it. 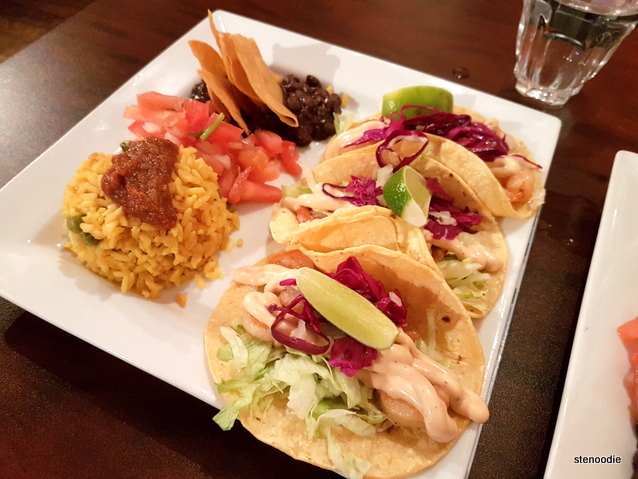 Ken ordered the Taco a la Parrilla after the server informed us that the red mole sauce for the Mole Poblanco was unavailable.  The Taco a la Parrilla also was served with Mexican rice, refried beans, and pico de gallo with a choice of sauce.  This entrée included three soft tacos stuffed with a choice of chicken, beef, pastor, veggies, steak, fish, or shrimp.  Ken chose shrimp for this one.

This plate was again very colourful and I loved the look of it.  I enjoyed the shrimp in the tacos in this one more.  The shrimps were grilled nicely and had some flavour to them.  The soft taco shells weren’t to my liking; I found them too soft and grainy.

(Interestingly, there is no extra charge for ordering steak in the enchiladas compared to veggies, let’s say.  Same thing for the tacos dish.)

We were taking our time to eat and before we knew it, the restaurant’s closing time of 9 p.m. was reached and we were still there at half past nine.  There was another table still dining too.  We quickly paid the bill after the server brought it over since we didn’t want to inconvenience the staff for making them stay beyond their business hours.

Overall, it was really nice to try out the food at Planeta Mexico.  We had a good meal there.  However, I’m not sure if I enjoyed everything taste-wise…  I say that because maybe I don’t know “authentic” Mexican food well enough to judge.  With that said though, the restaurant did a really great job with their decor to make it feel like we were actually dining in Mexico that night.  It was so warm, bright, and cozy inside the restaurant’s orange walls.