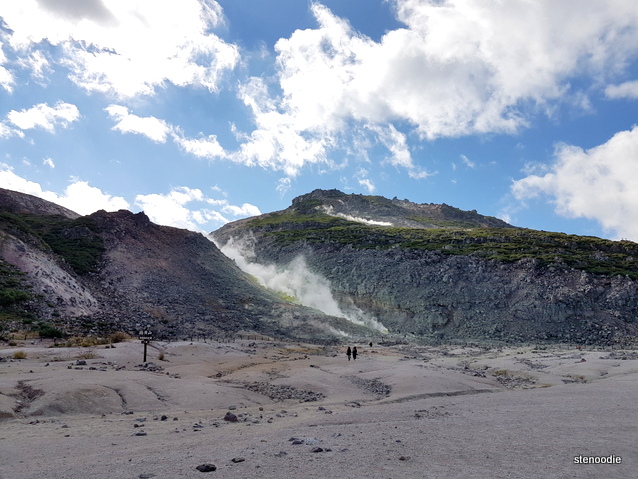 Day 5 of my Hokkaido trip and it was more of a tame day in terms of travelling and events I have to say.

Before leaving the hotel, we went for a second morning dip in the salt-based open air hot spring bath on the balcony.  It was great!  I had to be careful about not accidentally revealing myself since we were on the upper floors and anyone below could have actually seen me in my birthday suit if I wasn’t careful.  Loved the onsen!! 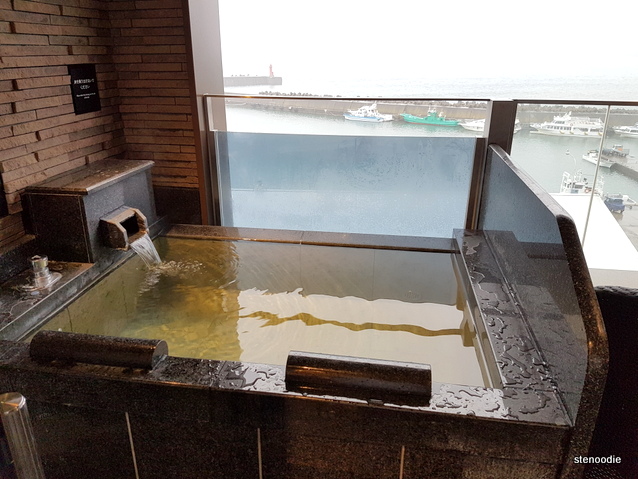 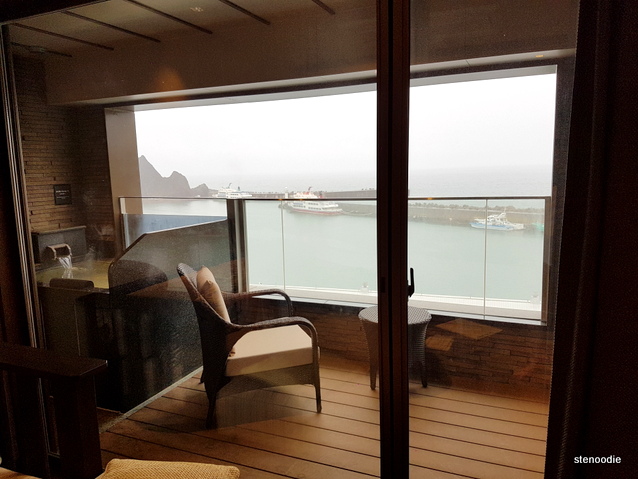 Entire view of the balcony from inside the room ❤ 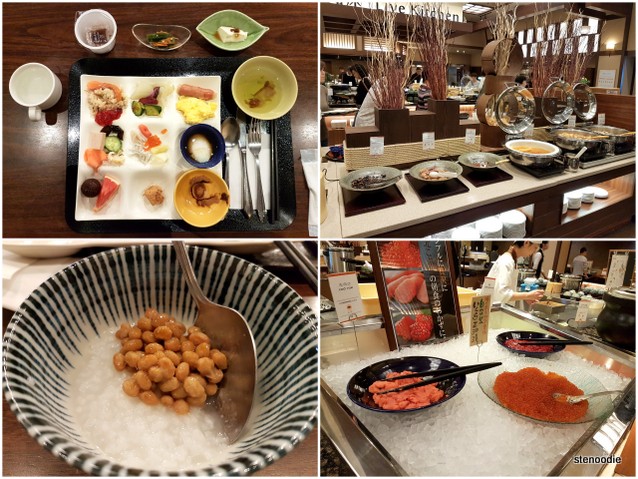 Breakfast was at the large buffet area as last night’s dinner, which was amazing.  There were so many types of food even for breakfast that I just couldn’t keep up with photographing everything.  We ate for about 30 minutes only so time was of the essence.

The first stop of the day after we got on the bus at 8:15 a.m. was to the Oshin-Koshin Falls (Oshinkoshinno Falls).  It was a gloomy day to start but the weather didn’t detract from the majesty of the falls. 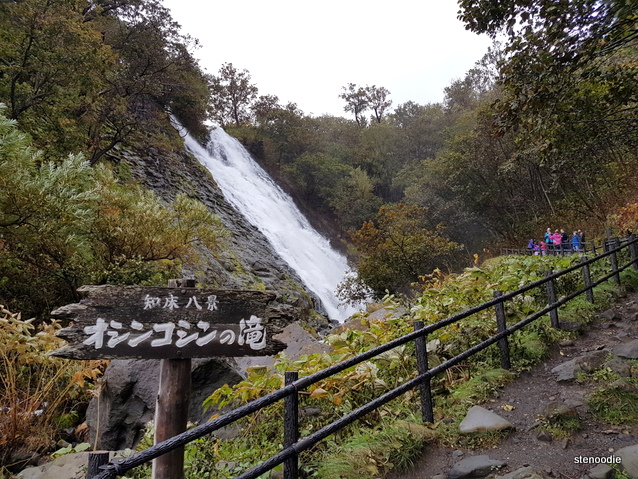 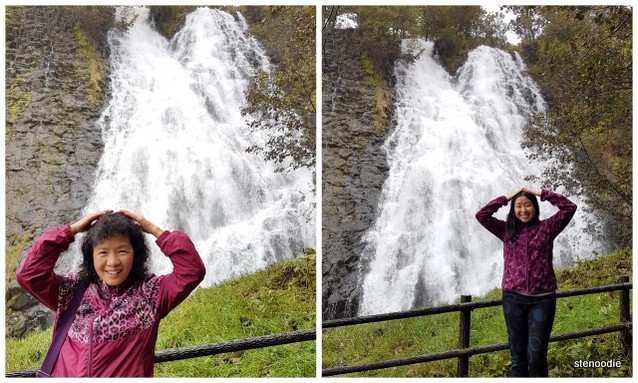 “Shielding” ourselves from the water 😛

After photos, we rode the bus for 30 minutes to a pit stop, before driving for another half hour to arrive at the Akan National Park where the sulfurous volcano was — Mount Iō (硫黄山). 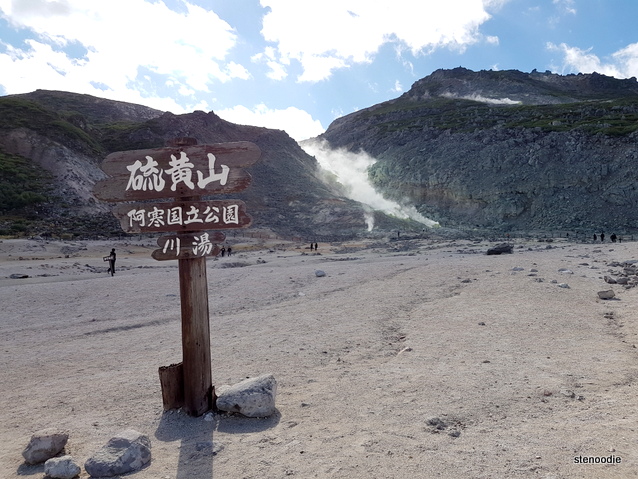 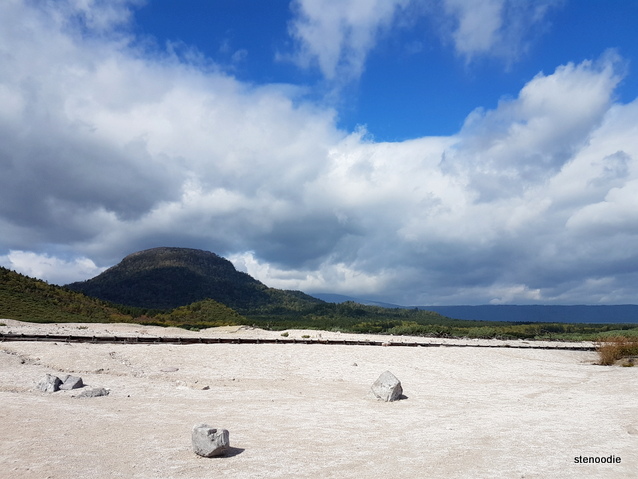 Another view at Akan National Park

You could smell the sulfur from the volcano right away.  I was more interested in eating the thermal cooked eggs than photos — as always.

There was a neat way of breaking open the egg to peel the shell away from the egg cleanly using a piece of duct tape.  It was genius and the boiled egg tasted good but was quite typical. 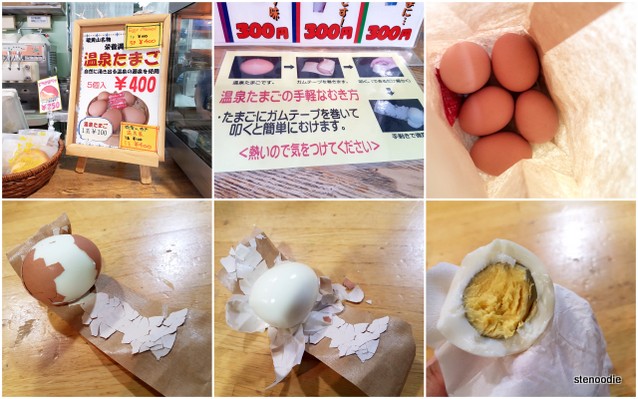 Steamed eggs and a smart way to peel them

After that stop, we went to Sunayu, a beach with a souvenir shop selling pistachio soft serve and collagen peach soft serve.  I tried the collagen peach flavour which tasted quite good but didn’t have enough milk taste in it. 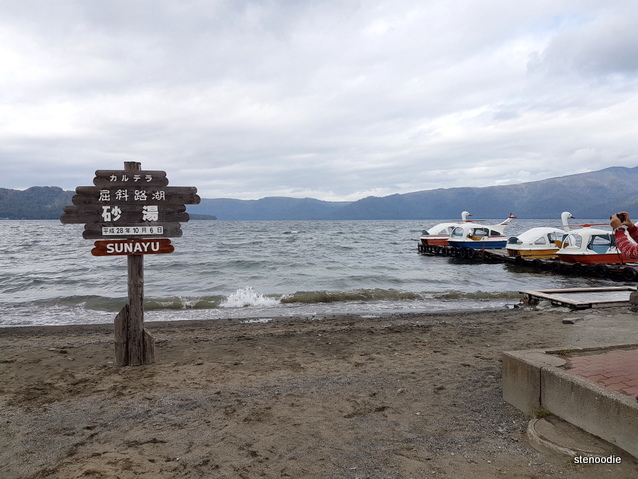 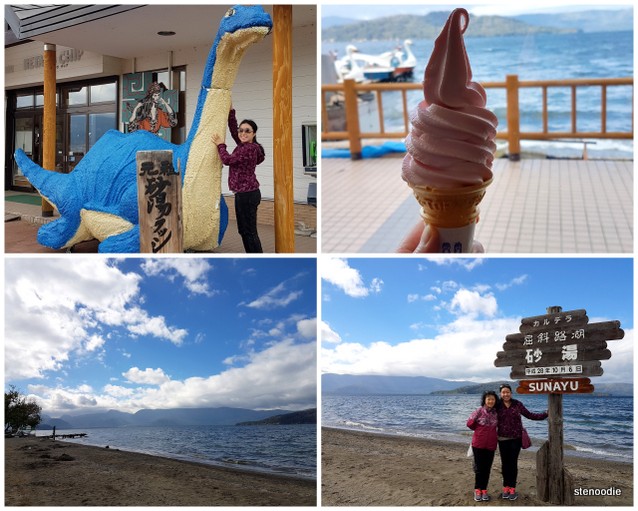 We were there for 45 mins to take photos but since it was quite cold and chilly outside, we hid inside.  By the time we left however, the skies had all cleared and it was a bright sunny day with blue skies so we took advantage and took some more photos.

Lunch was at an owl themed hotel and we had bento boxes in kaiseki style (懐石料理).  There was so much food and I especially liked the salmon and scallop sashimi.  Yum! 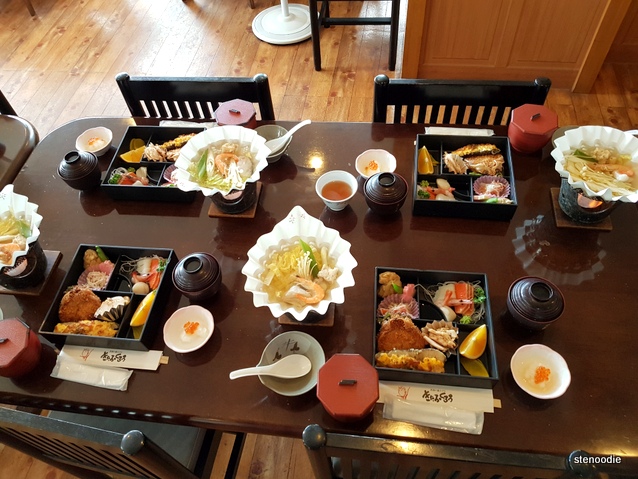 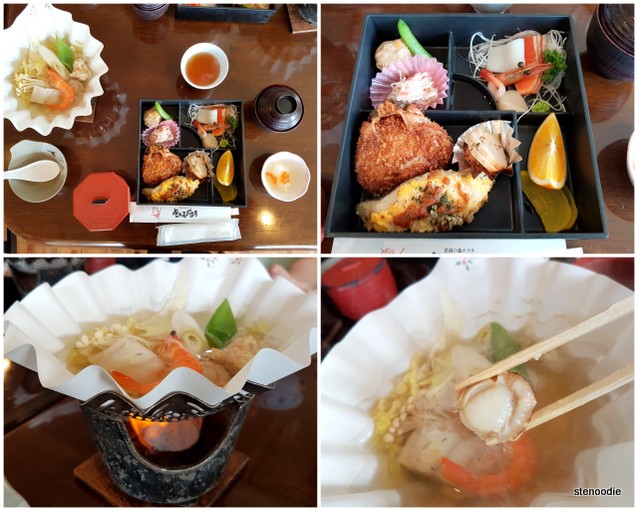 I liked this, especially the crab shell, but thought it could all have been hotter

After lunch, we started the 3-4 hour journey to our next destination, Katogun, where we would be retiring for the night.

We got to Daiichi Hotel at 4 p.m. after a pit stop (I got my favourite corn soup from a vending machine) and checked out the rooms. 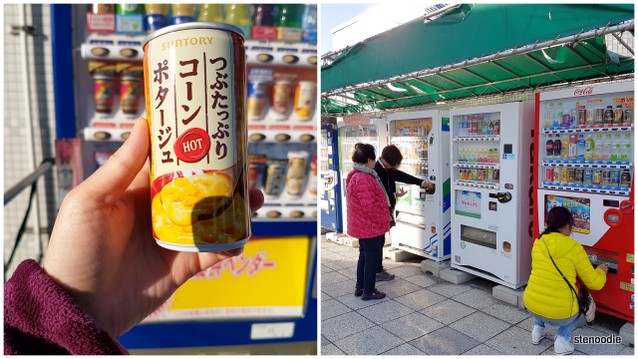 We had a tatami mat and floor sleeping style bed this time.  We changed and went downstairs to the public onsen for some 40 degree and 42 degree onsen. 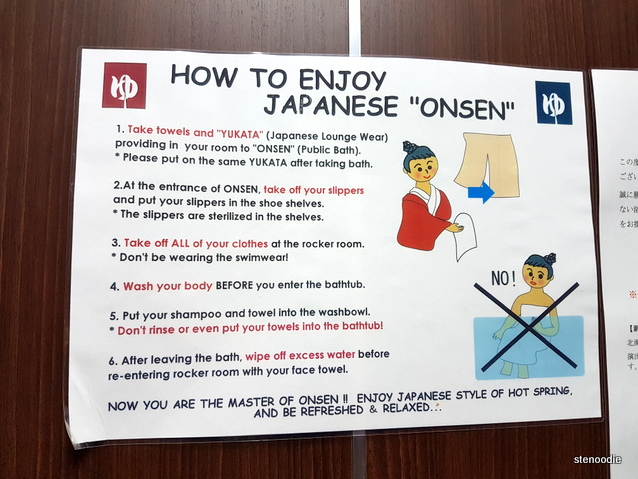 It was my first public onsen in Japan!  I regret not going to the two other ones the first.two nights since we had a private one in our suite.  Ah well.

The onsen was incredibly relaxing.

Dinner was at 6 p.m. and also a kaiseki style.  Everything was so detailed and nice but definitely not as substantial as the portions at lunch time. 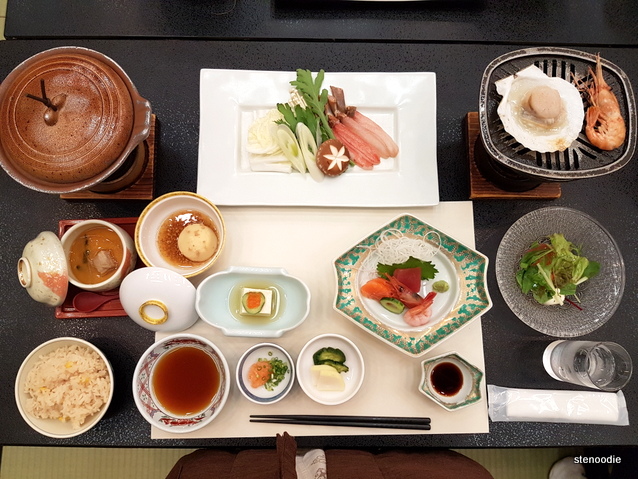 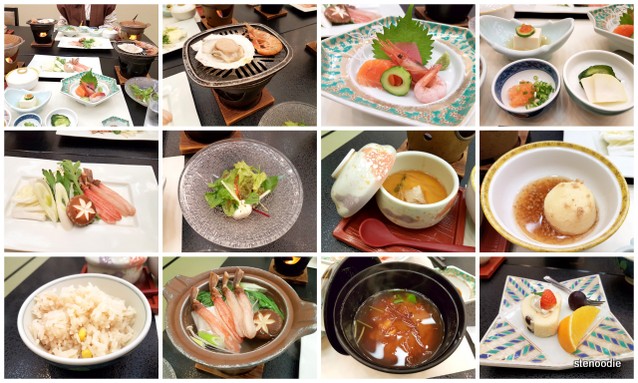 After that, we went up to the private lounge on the third floor that my relatives were in to scope out the snacks, drinks, and soda area.  It was incredibly nice there and there were so many snacks! 😀 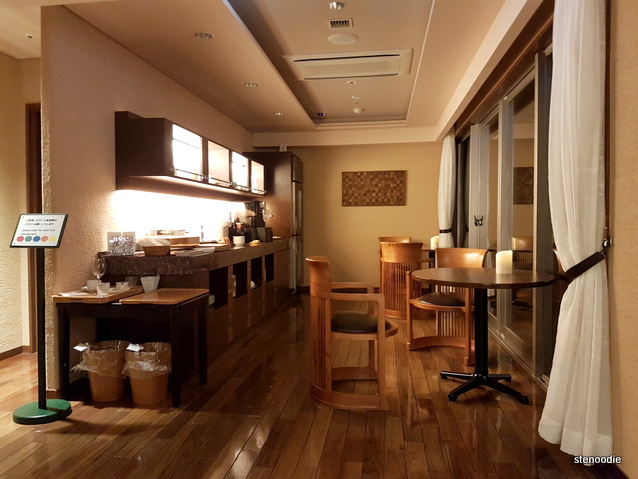 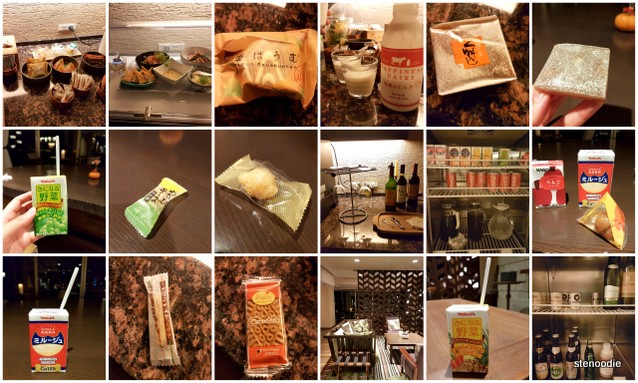 Look at all the post-dinner snacks and drinks we had!

After the post-dinner snacking and drinks, we strolled around the hotel for a bit before returning to our rooms.  The hotel was so nice! 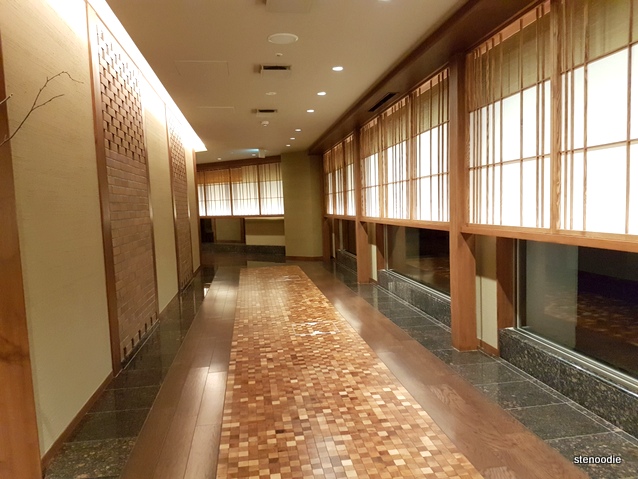 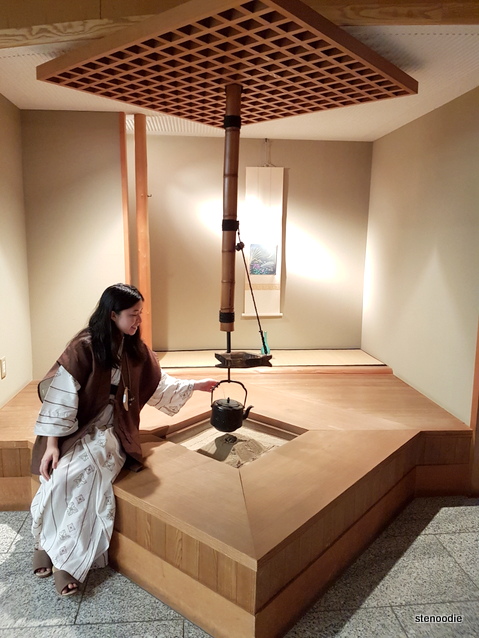 A nice photo area for me 😛

Then, we retired back to the room.  Tomorrow is day 6 and we are nearing the end of the trip.. 😦 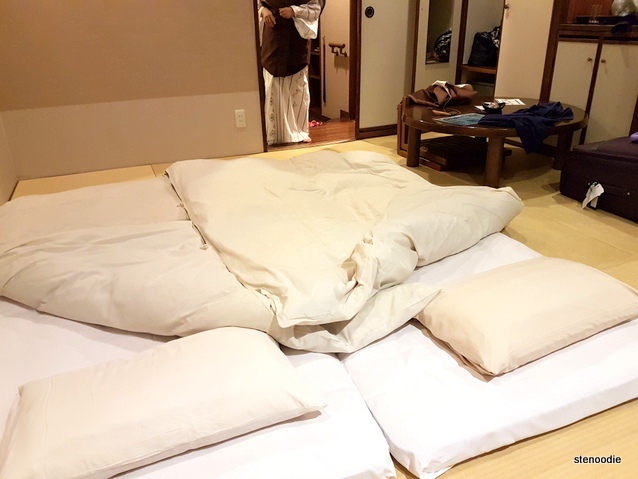 Our tatami beds for the night! 😀