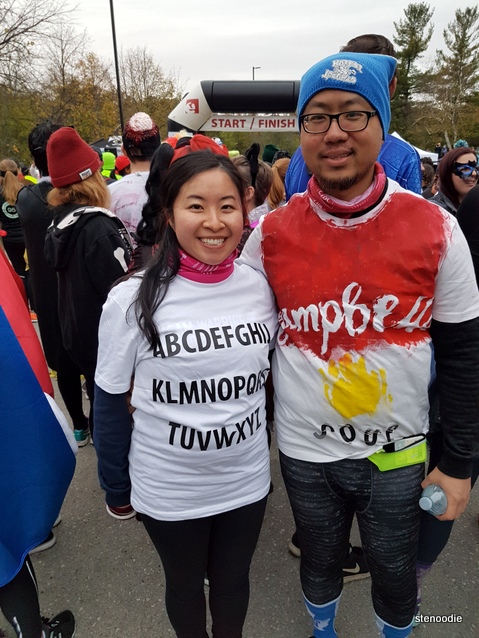 October 29, 2017:  I participated in this year’s Monster Dash 2017 event in Toronto, a 5K run! 😀  I didn’t even know a Halloween-themed event and run like this event existed, never mind already in its 6th year of running too! 😀

The Monster Dash consisted of three options: A Spooky Mile (about 1.6 km), a 5 km run, and a 10km run.  Participants are encouraged to dress up and have fun while running a chip-timed race.  The Spooky Mile is not timed and best for kids to participate in.  The 5 and 10k are best for young adults or those young at heart. ;p

They were really well-organized with a thoughtful pre-race and post-race events!

This year’s race was apparently at a brand new venue, the Ontario Science Centre, and where all donations and proceeds from the event went 100% to the OSC for their Adopt-a-Class program for educating kids.  So meaningful! 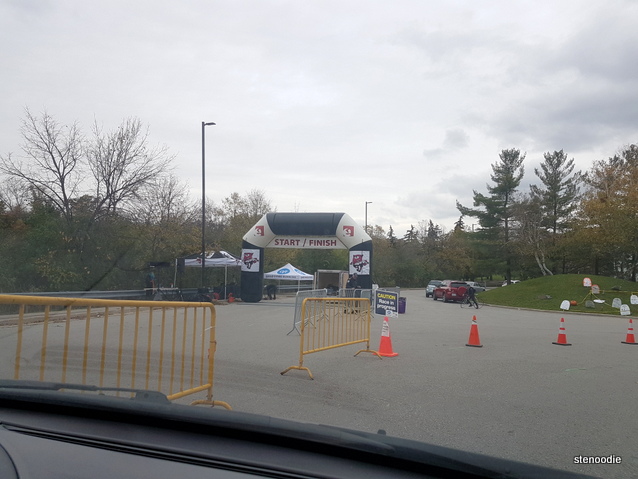 Seeing the Start/Finish line as we arrived! 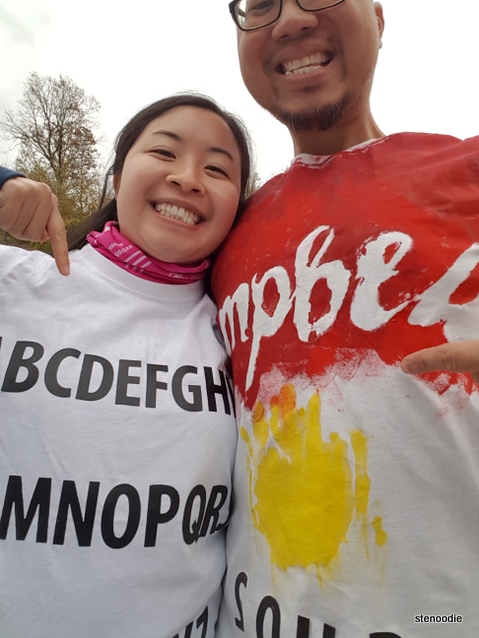 We’re ready for the race! Can you guess what we dressed up as? :p 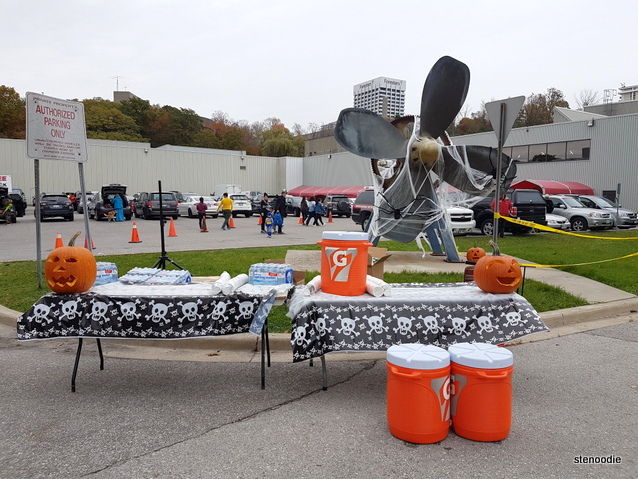 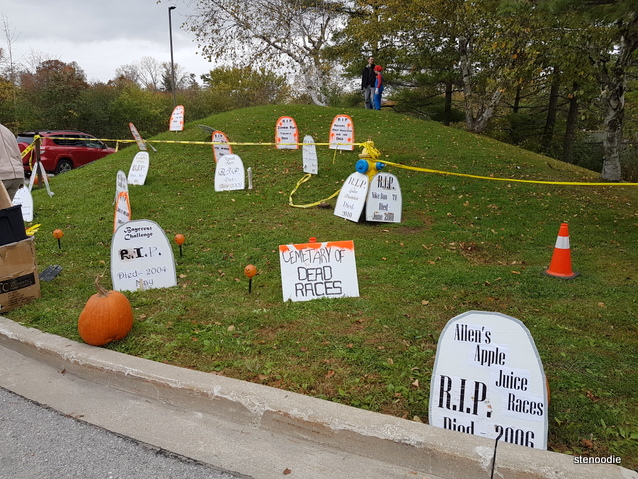 Ken and I arrived early to the OSC where there was free parking for us Monster Dash participants.  We got there before 4 p.m. and checked in.  We received our bib, goodie bag (full of OSC swag and info and snacks), as well as our Monster Dash blanket too!  It was so neat that this race gave out blankets instead of the typical T-shirts.  (That blanket is super warm and cozy!) 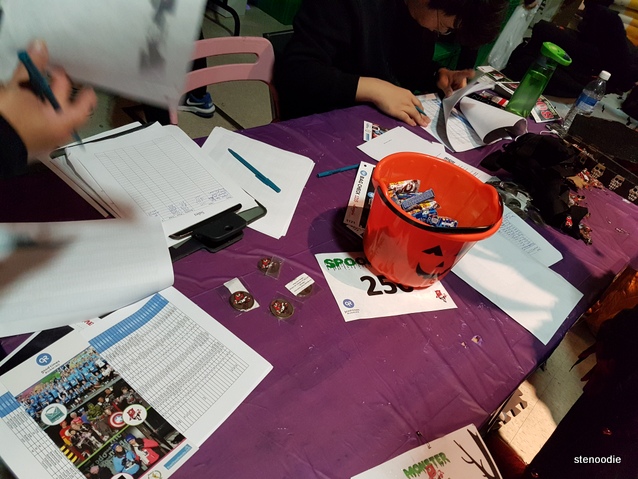 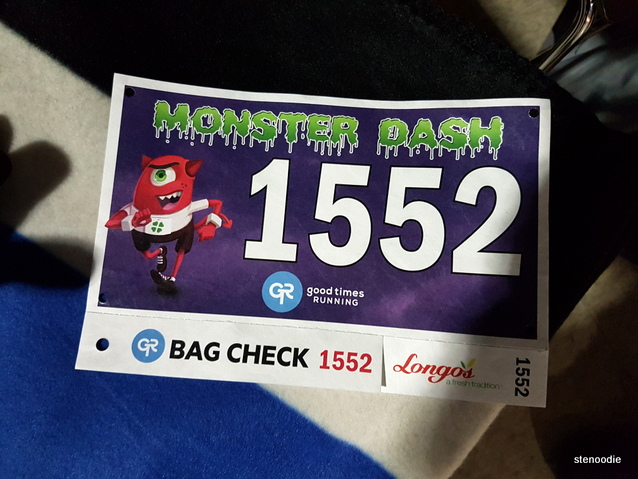 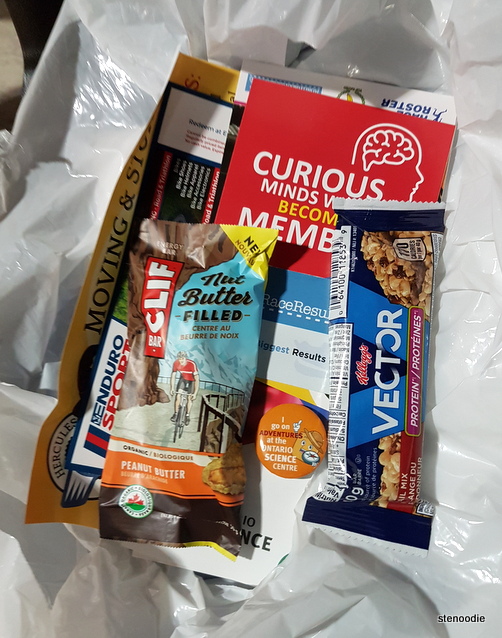 The volunteers did a great job setting up the place with Halloween displays and gave out cheesy mini rice cake snacks.  Yummy 😀  The fruit stand at Longo’s, protein bars, and pizza were already available too.  Casper the movie was showing on the big screen and there were seats available too. 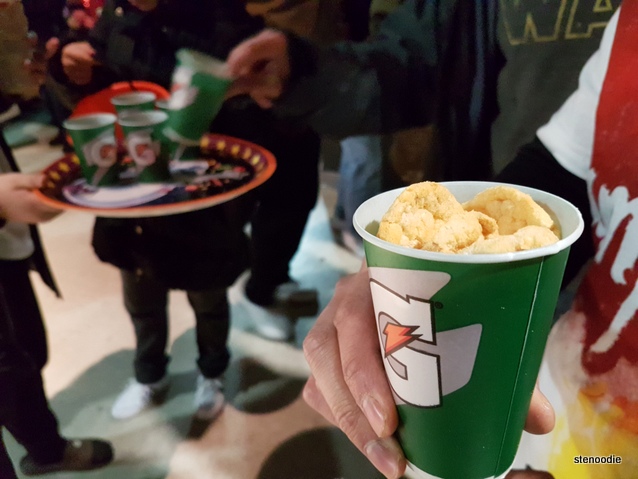 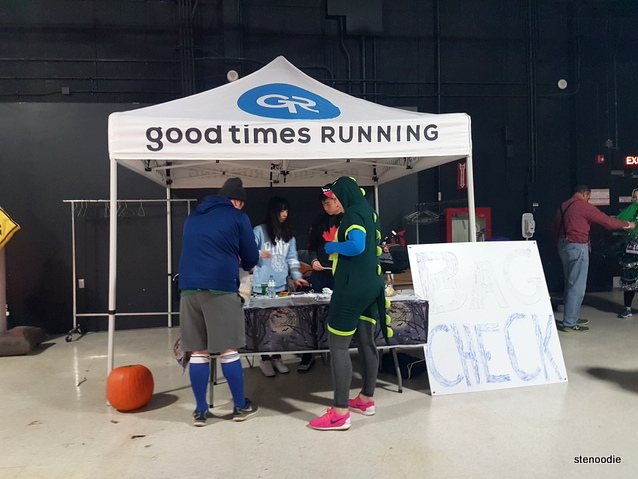 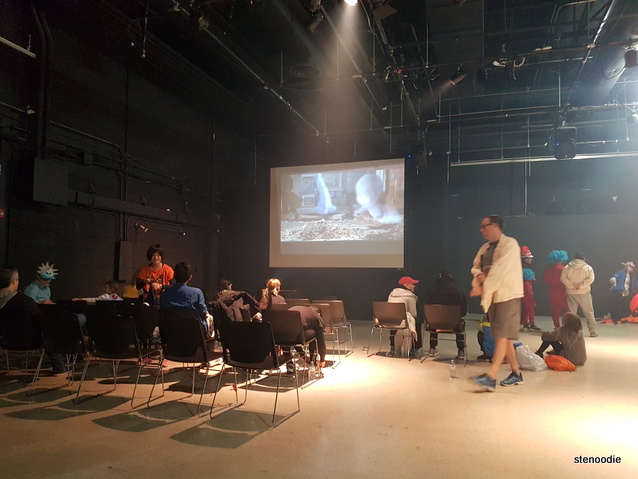 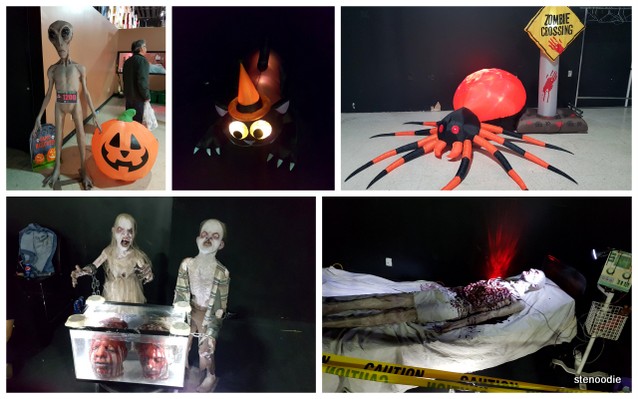 Halloween displays all around the area

In the bigger room, they had more Halloween displays set up including the Throw-a-Shoe activity where you could win a ticket to see Katy Perry in concert and Shiny Apple Cider stand. 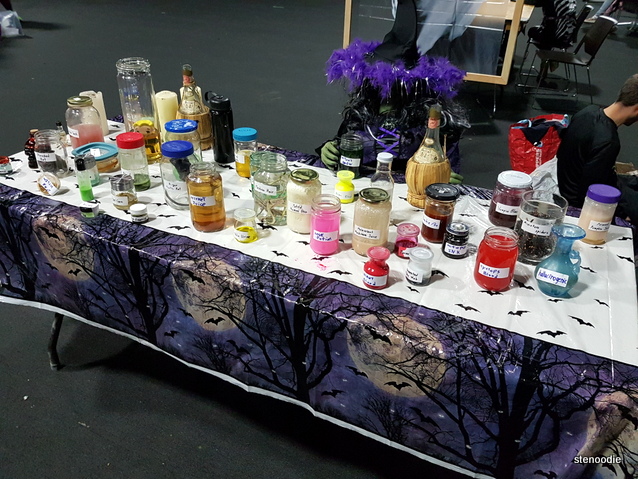 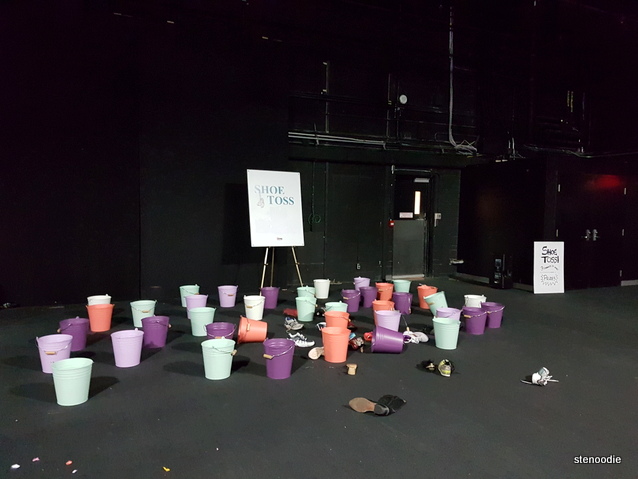 What I loved the most about this event was how everyone came dressed up for Halloween.  There was such a large range of Halloween costumes from kids, moms and dads, couples, and groups of friends.  It was amazing to see all the costumes!! 😀 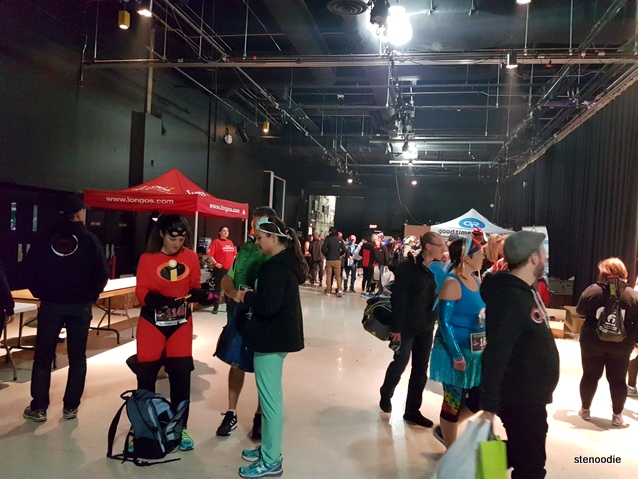 This soon filled up as participants arrived 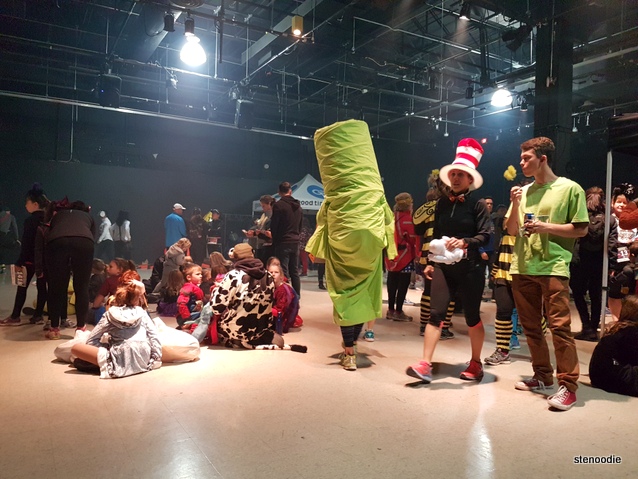 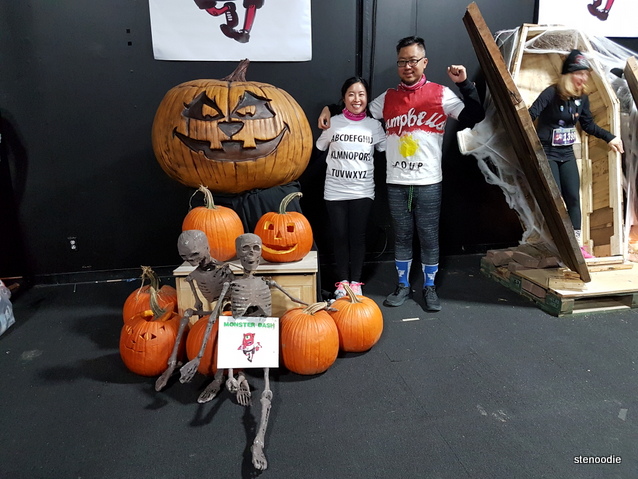 There was a coffin that you could take pictures in 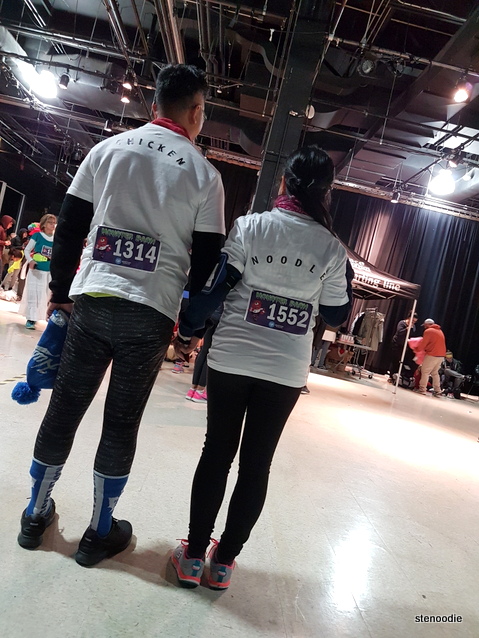 We had a double costume going on in the back. Can you see what we were as well? 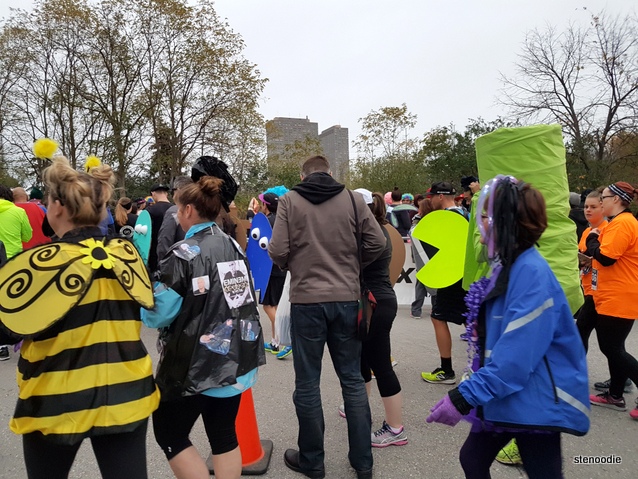 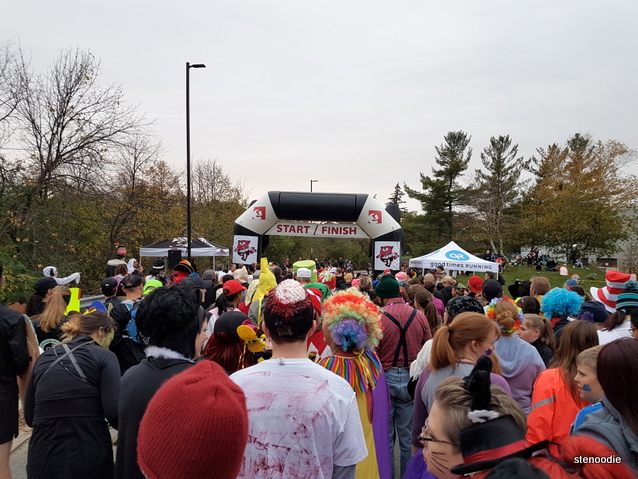 I didn’t take any photos as we did the race but it was so nice to run through the path.  It was a good path to run in, barely any uphills.  The sun was setting at that time and I could see the beautiful multi-coloured foliage of the autumn trees.  The weather was nice and crisp too and not too cold. 😀

A lot of people came prepared with glow sticks or lights embedded into their costume which was so effective in the dusk and evening darkness.  They must have done this race before! 🙂

I like how as we approached the finish line, so many people (I’m assuming parents) were cheering the runners on.  We were received warmly by the volunteers who handed us the race medals too! 😀 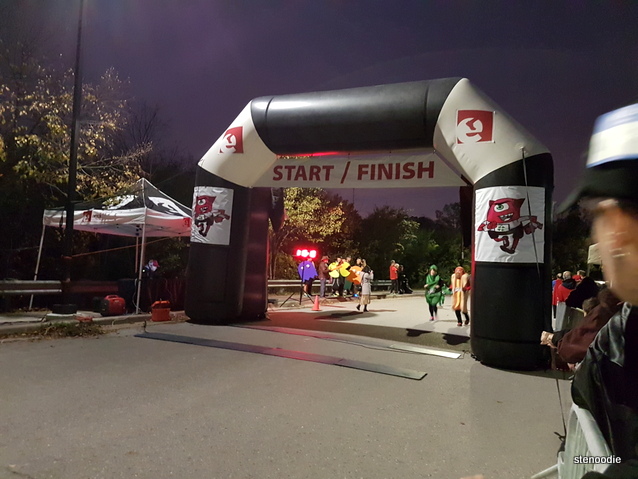 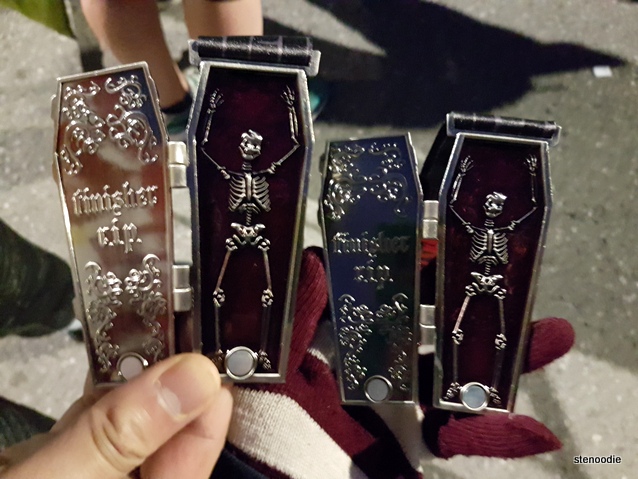 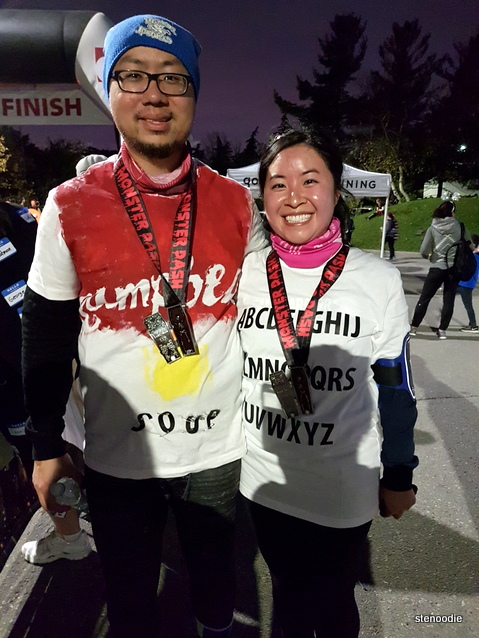 After that run, we replenished ourselves with water and the Shiny Apple Cider and pizza from Pizza Pizza (we had a wait a bit since the first round of pizza had run out unfortunately).  Towards the end, they only had cheese and veggie pizza left. 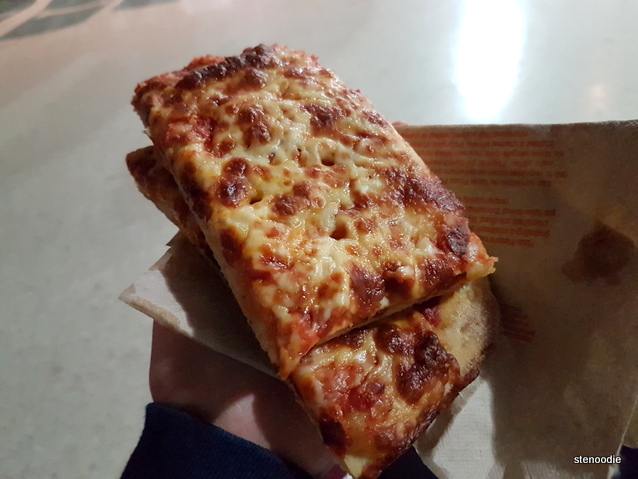 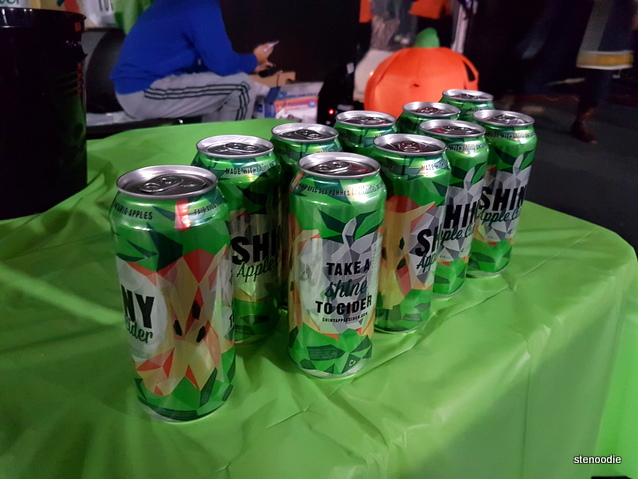 They announced the winners of the costume contest too! 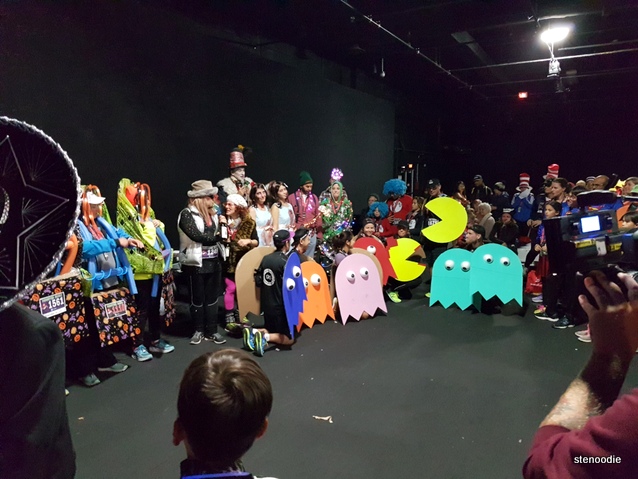 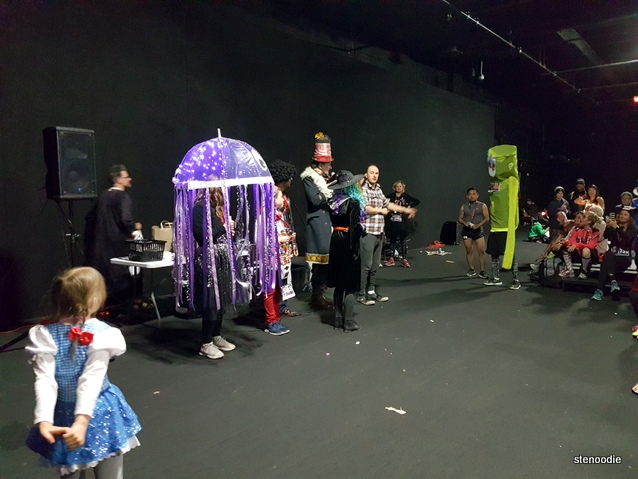 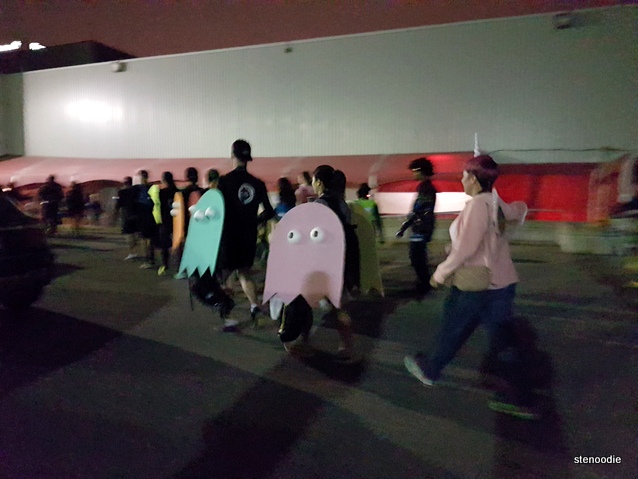 The stand-out costumes that night for me were a group of Pac Man, jellyfish, Christmas tree, group of roller coaster riders, an internal body, whoopee cushion, Shining Twins, Superhero family of 4, egg and bacon couple, emojis, rainbow unicorn, scarecrow, dog walker with dogs around a hula hoop.  There were a lot of Wonder Woman, bees, superheros in general and some Harry Potters.

The range of costumes was truly outstanding and apparently this year saw the most ever participants and largest group who dressed up too!  Yay! 😀

The skeleton medal was really cool as a souvenir too :).