Lining up to try Konjiki Ramen in North York! 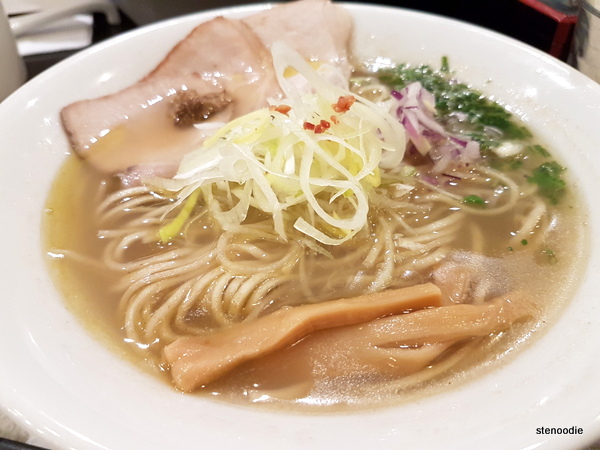 January 21, 2018:  After the opening weekend “giveaway” at Meet Fresh, we headed straight down the street to Konjiki Ramen (located across from the North York Civic Centre) to see what all the hype was about.  Konjiki Ramen comes from Japan and is Michelin-recommended for their best-tasting ramen and unique clam-based soup base.

I already expected a line-up and a line-up we did enter into!  We waited in line for a total of exactly one hour from 12:20 to 1:20 p.m. before we got called to sit down at a table inside: 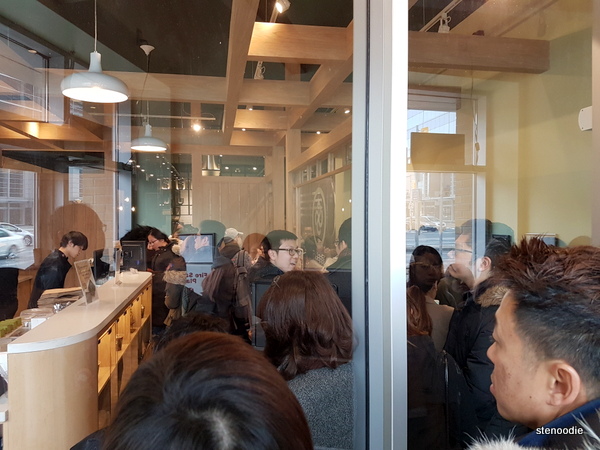 The view of all the people waiting when we first arrived at 12:20 p.m.

There was a long hallway into Konjiki Ramen which also shared the space with a mostly take-out Japanese dessert cafe, Saryo Tokyo Cafe & Dessert.  I wish Konjiki Ramen organized their line-ups better and in an organized fashion.  The entrance to both the ramen restaurant and dessert cafe had a small vestibule between the main door and the second door (probably used to keep out the wind) where people were waiting in line before we could actually go into the restaurant to join the line-up.  (It was also a little confusing at first because there were so many people standing in the vestibule that you didn’t know whether the line was for the cafe or for the ramen — but common sense told us that the line-up was for the ramen.)

As it was a cold day in January, we were told by a staff member who kept coming up to the door to tell those of us standing there to keep the second door closed.  However, this meant that it was unclear on who was actually “next” in line for those standing in that little vestibule because once the second door opened, we tried to enter through the door if there was space to get in line for the ramen.  However, it didn’t help that it was lunch time and a certain patron was cranky and anal about people “butting” in front of her.  It certainly didn’t give off a very good impression of the line-up process at Konjiki Ramen. 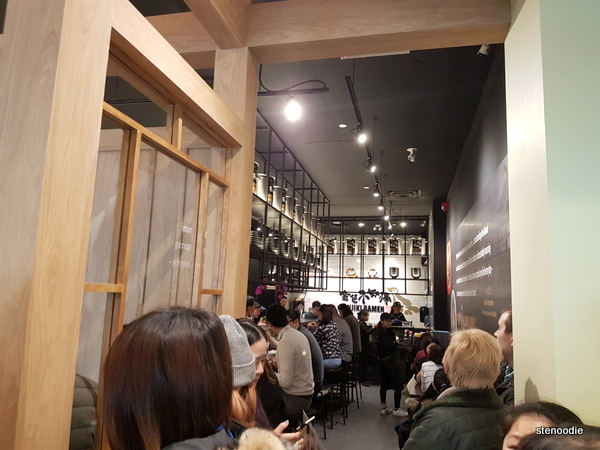 When we finally got past the awkward waiting part of the vestibule and were actually in the line, we heard the hostess calling out names for parties to be seated.  We heard “John for 2!” or “Sally for 3!” and I felt immediately anxious because we hadn’t given our names or given a place in the line at all.  We had been waiting all along though.  What if other people had gone in front of us to get their name in the list and we weren’t on it because we were just simply waiting in the line?  Thus I walked up to the front of the line to inquire.  The people who were at the front of the line informed me that I had to put my name down with the hostess who was carrying the clipboard.  Okay… so how come no one told us that then?

So I walked over to the female hostess who was standing in front of the dessert cafe holding a clipboard to ask her about putting my name in the list.  She wasn’t very pleasant because she sternly told me to return to the line and that she’d approach me about putting my name down on the list once she got to me.  Again, it didn’t make for a polite nor good first impression of the restaurant. 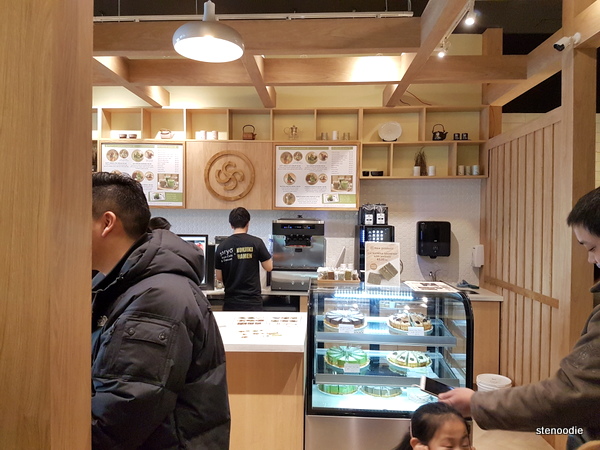 We continued waiting in line.  It took another couple of minutes before we saw the hostess finally asking people in front of us and down the line what their names were and putting their party numbers down.  Finally!  Finally we were put in place on the list (and given a menu to look at while we continued waiting in line).  Why couldn’t she have done that sooner to ease the frustration from waiting in a line that could easily have been misconstrued by the hoards of people waiting around?  They definitely should organize their line-ups better. 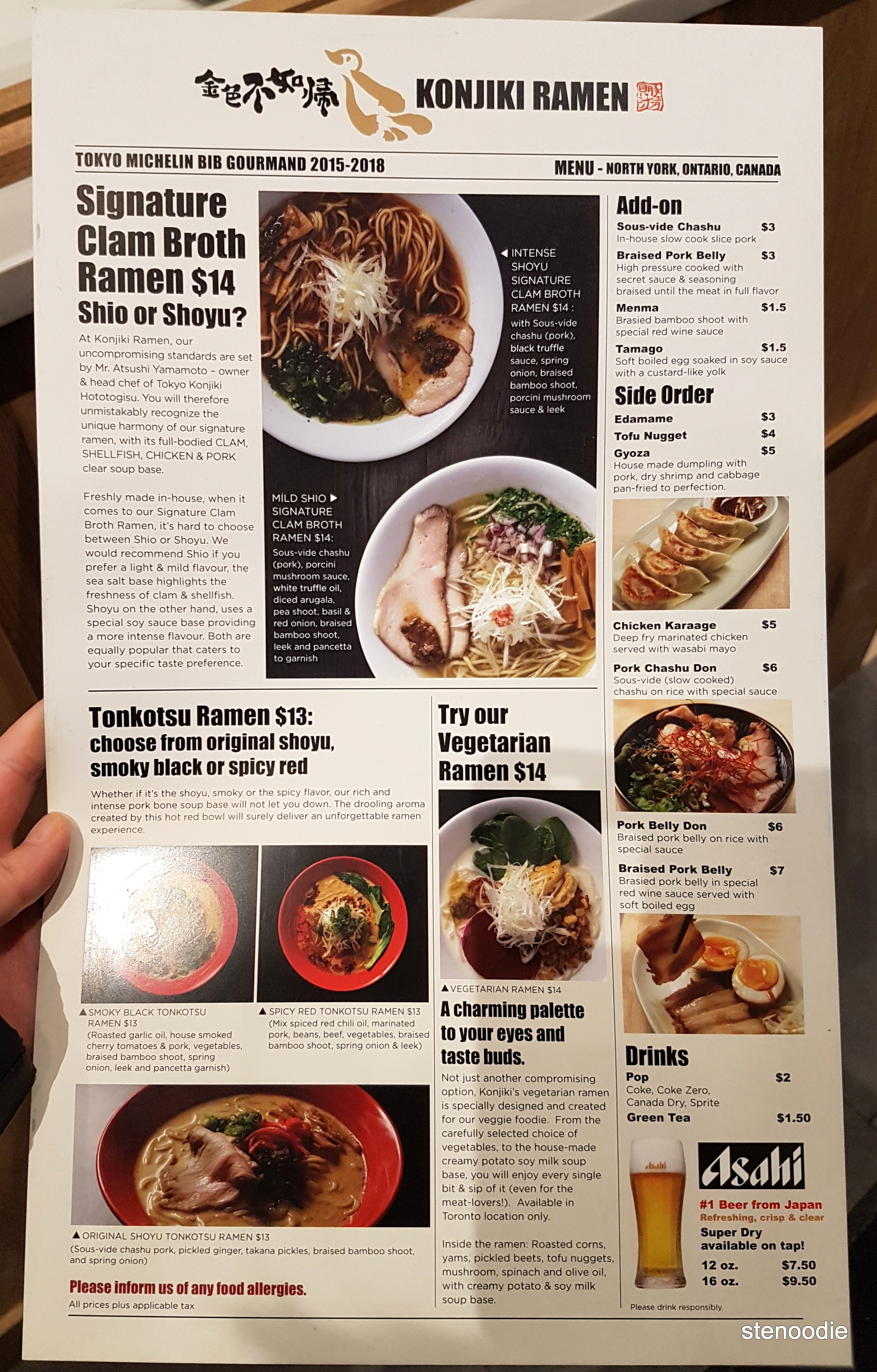 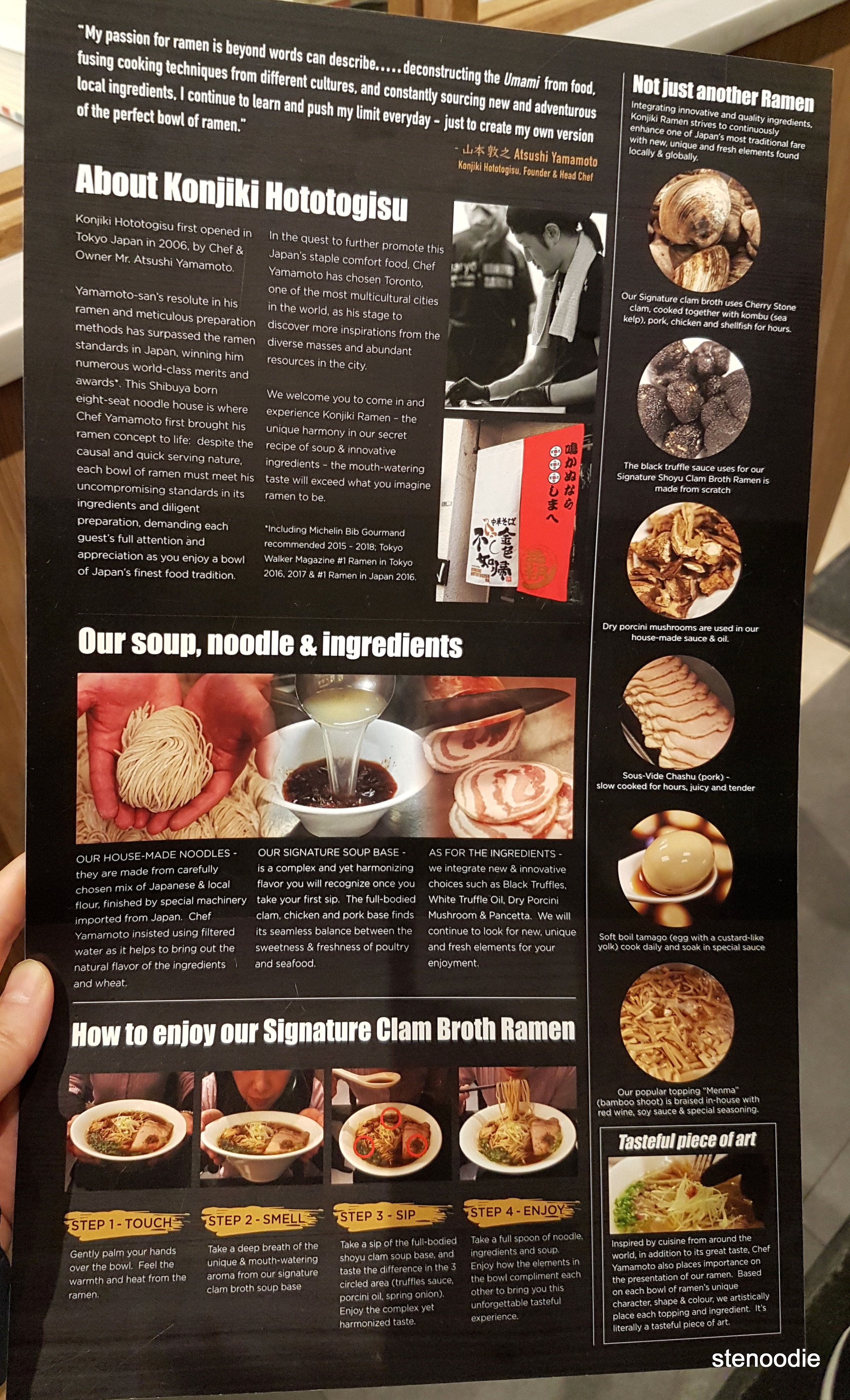 History of Konjiki Ramen and steps to enjoy the ramen 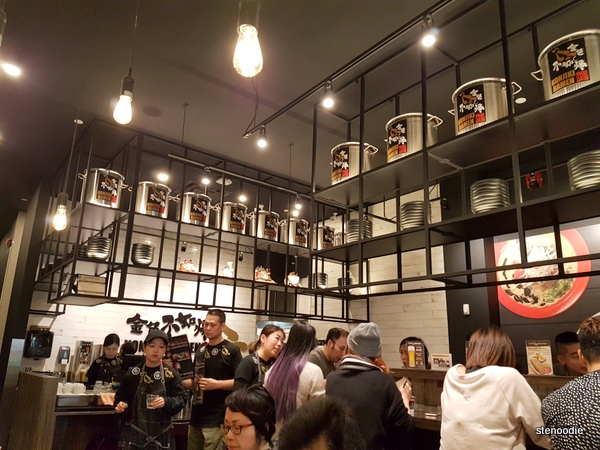 The interior of the restaurant as seen from my seat

Like I said, it took us a full hour of waiting from beginning to end before we were called in for a seat.  We got a table near the wall in the middle of the room.  I was surprised that the seating wasn’t cramped inside which was a good thing — although they actually could have  technically fit in one more two-seater table in the booths — but in a way I’m glad they didn’t since it allowed for more privacy between the tables too.  I liked the decor in the middle of the room where there were hanging shelves with tins placed on them.

We already knew what we were going to order since we were also given the menu to look at while we were in line — smart idea.  Our bowls of ramen came out surprisingly fast!   I found that the staff here were overly nice and friendly. 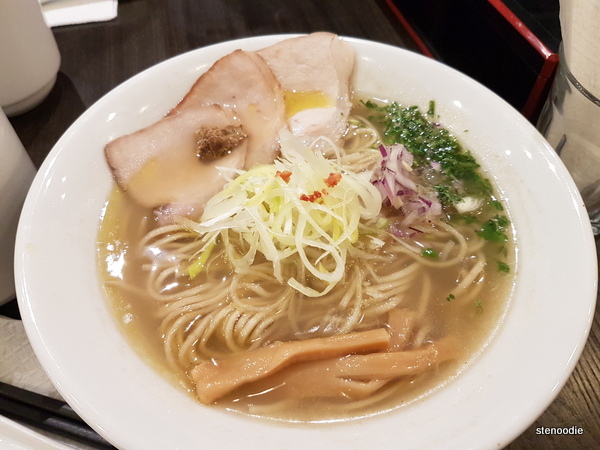 I got the Mild Shio Signature Clam Broth Ramen which had sous-vide chashu (pork), porcini mushroom sauce, white truffle oil, diced arugala, pea shoot, basil and red onion, braised bamboo shoot, leek, and pancetta to garnish.  I’ve never had a clam broth ramen before with pancette too so I was definitely excited to try it out!

I appreciated that the back of the one-page menu actually taught us how to enjoy the clam broth ramen in four steps.  First you touch the bowl by feeling its heat with your hands, then you smell and appreciate the soup, then you sip the broth from three specific corners of the bowl to ascertain different ingredients, and finally to eat it.   I really liked the signature clam broth!  It was so light and refreshing.  It was so much lighter than any other ramen broth I’ve had before (since those are usually made with pork instead).  Upon nearing the bottom of the bowl, I definitely tasted the saltiness/ocean feel of the clams too.  Since the soup was made with clams, it was also not fatty at all (also a rarity among most ramen broths)!

I liked the ramen noodles!  They were fine and grainier than most ramen noodles and tasted very light and fresh. The sous-vide chashu was very thin in texture and smooth.  It wasn’t heavy either.  I liked the bowl overall and the portion was just enough for me. 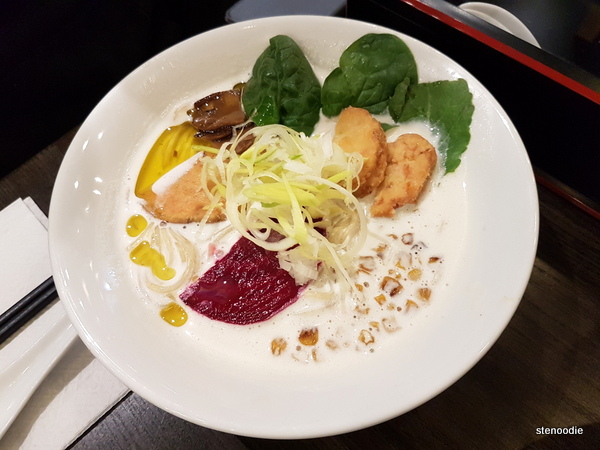 Ken ordered the Vegetarian Ramen which I had been eyeing too.  Vegetarian ramen can be really tasty and this one definitely was unique too.  It included the house-made creamy potato soy milk soup base with roasted corn, yams, pickled beets, tofu nuggets, mushroom, spinach, and olive oil.  The ingredients made it a really colourful bowl and the white creamy potato soy milk soup base definitely stood out against the veggies.  I liked the soup base as it was so creamy and milky.  It was not something I had tried before and was actually even more flavourful than my Shio clam broth.  I tried the pickled beet too and it was hard in texture but very sour and indeed pickled.  It was good for enhancing your appetite. 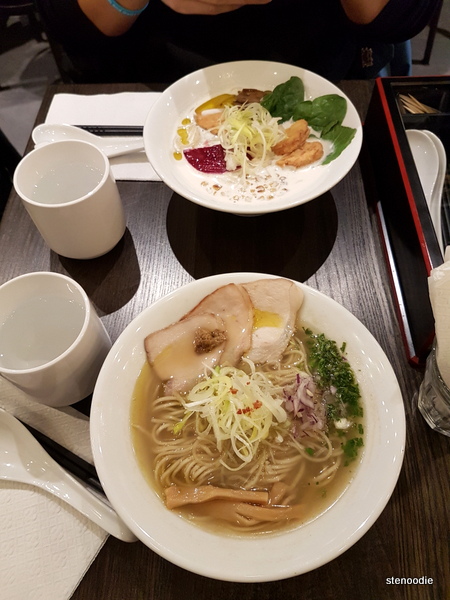 Our bowls of ramen! If you are a big guy, the portions might be a little small for you

I liked Konjiki Ramen overall and the quality of the ramen and soup bases.  I would definitely want to come again and try their other bowls of ramen like the Tonkotsu Ramen that Allison was raving about.  I’d also like to try their side orders like the braised pork belly and soft boiled egg too.  I just hope that next time I won’t have to line up for an hour and that they have an improved organized way of getting their guests in a logical line-up.

When we left the restaurant, the line continued past the front door this time.  I’m sure this place will see line-ups for a long time (especially on weekends!) 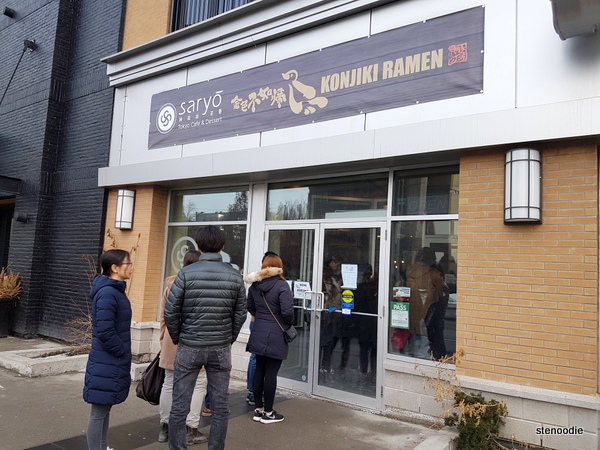 The line-up as seen when we left the restaurant

1 Response to Lining up to try Konjiki Ramen in North York!