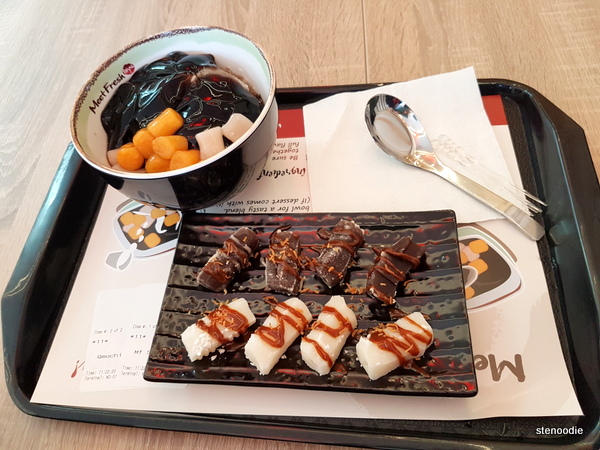 January 21, 2018:  Meet Fresh is a Taiwanese dessert restaurant that has now expanded to Toronto!  I remember hearing about the news sometime last year when Sweven Media was working on bringing them over to Toronto.

This past weekend (January 19, 20, and 21), Meet Fresh had their opening weekend.  In celebration of that, they had a “Free Q Mochi Giveaway” with this message:

“As appreciation for your patience and interest, we want to give you free Q Mochi!  The first 300 customers to arrive on the opening weekend (Friday, Saturday and Sunday) will be given a Q Mochi set (8 pieces) for free on each day!  We open our doors at 11 am, so make sure to come early to get yours!” 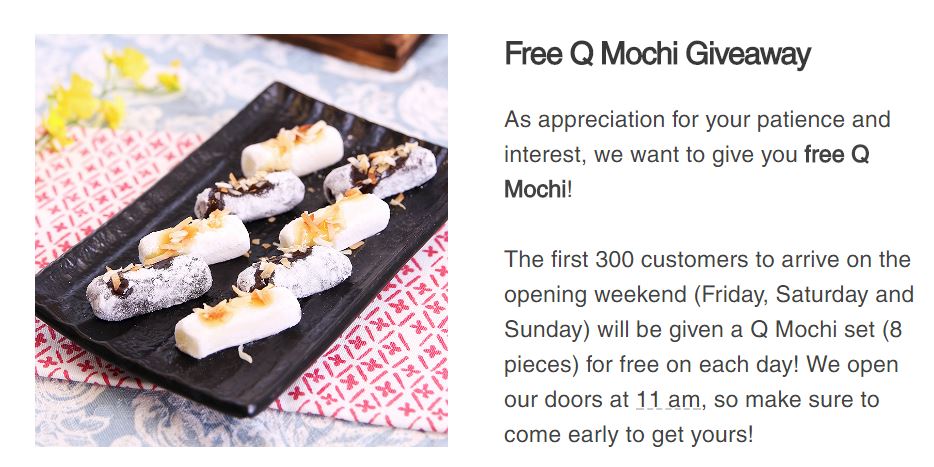 Screenshot from the promotional e-mail that I received

I received that promotion e-mail in my inbox from Sweven Media.

My boyfriend also alerted me to this giveaway because there was a Facebook event where the title of the event was “300 Free Q Mochi Sets each day, Meet Fresh Soft Opening”.  See screenshot below: 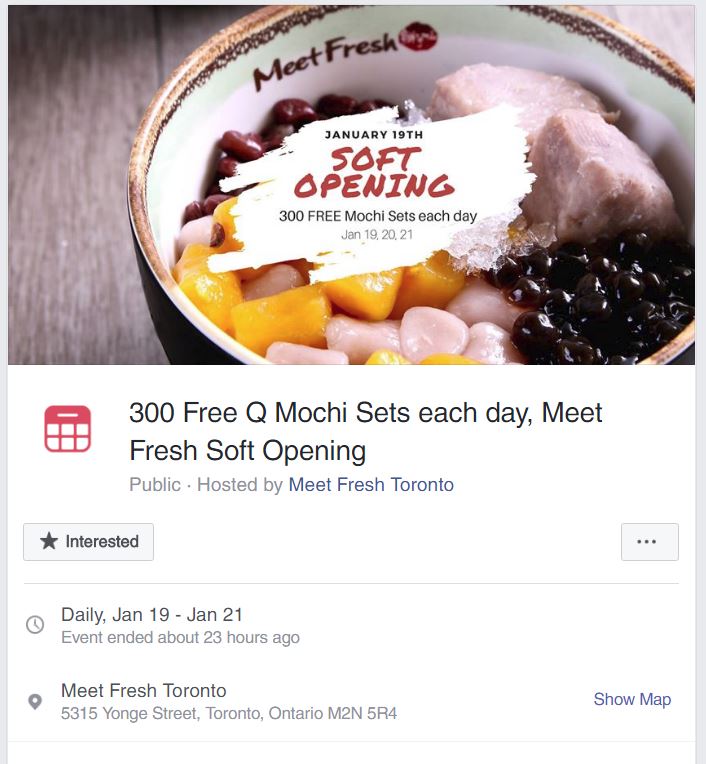 So anyone reading these words would think that upon lining up at 11 a.m., the proposed Q Mochi set would be free; right?  It only made sense that if you had to line up that early in anticipation for their event that there was going to be a big incentive like something being given out for free.  As a PR company or restaurant promoting itself, giving free items to campaign and hype themselves is a smart marketing idea.  When something is given for free, you have willing happy people who are going to line up for hours and provide free promotion for you.  It’s win-win for both parties.

Thus, Ken and I arrived in North York at 10:45 a.m. on Sunday, January 21.  We arrived at the Meet Fresh location exactly at 11 a.m. where there was already a small line-up of about 10 to 15 people in line.  Once we queued ourselves up at the end of the line, the doors opened and everyone was able to go in.  We arrived right on time! 🙂 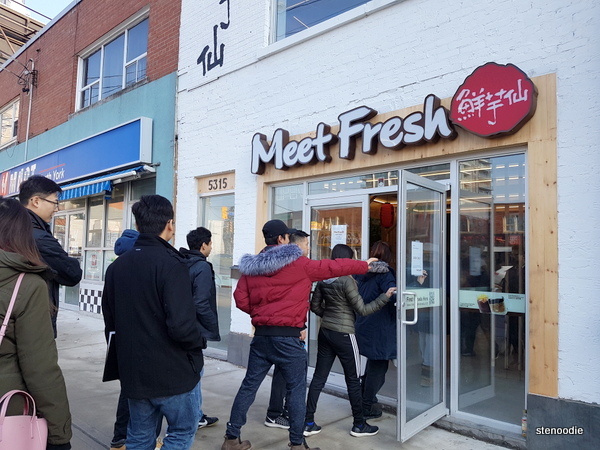 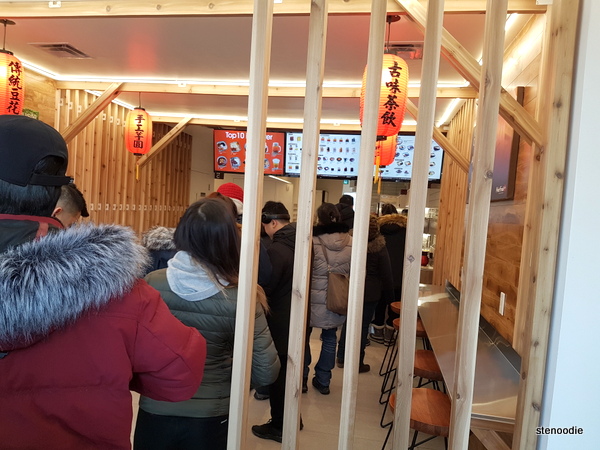 Waited 20 minutes once inside to actually place an order 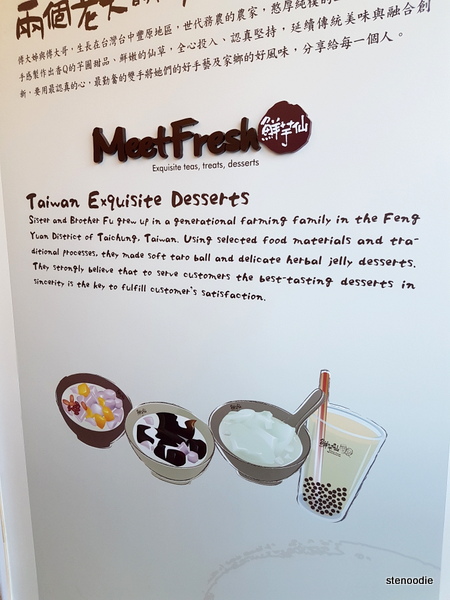 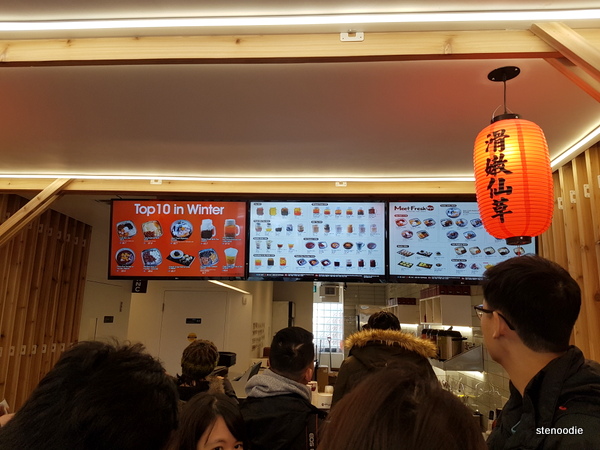 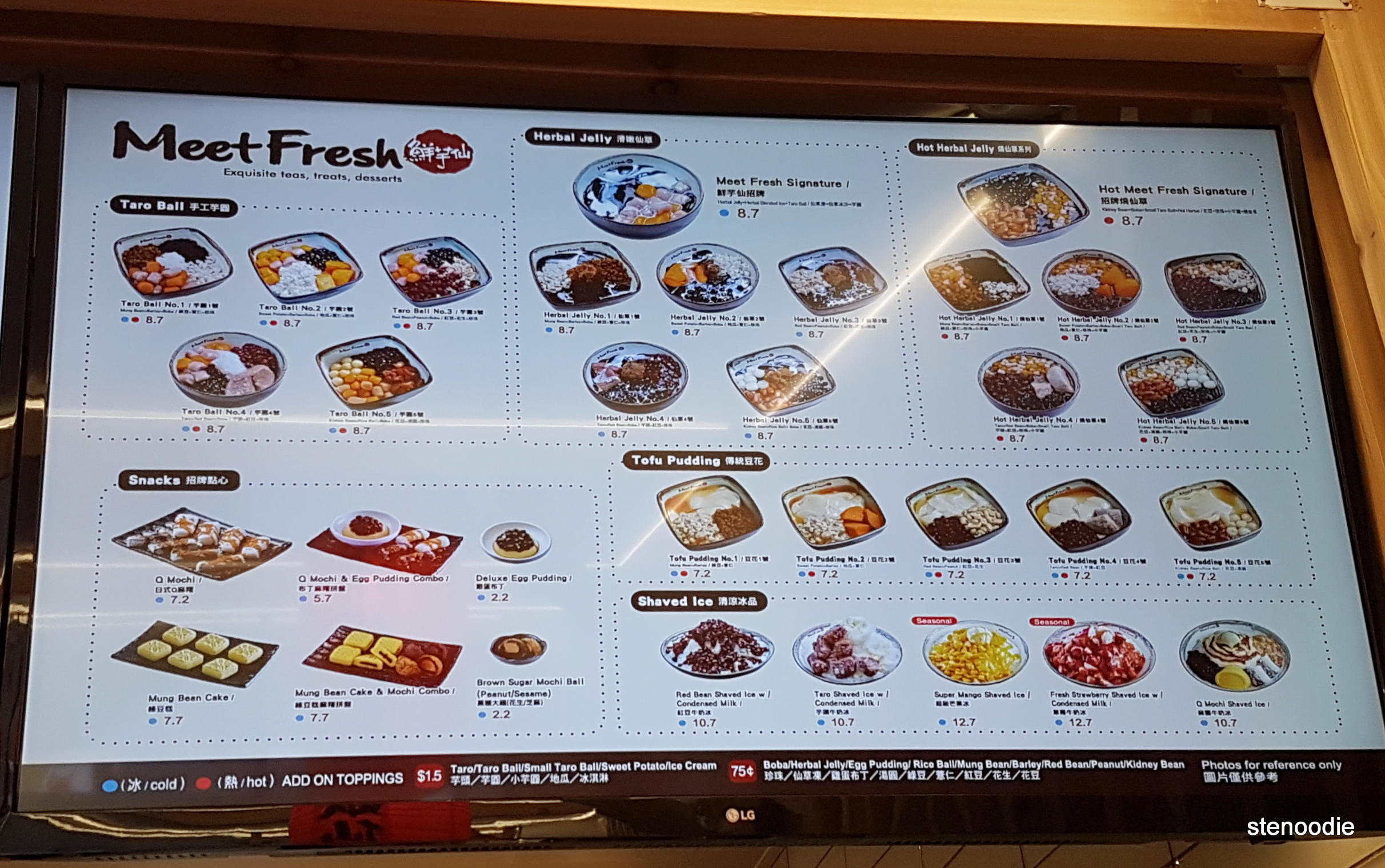 There was a menu of the items above the cashier and the line seemed to move slowly.  We overheard someone in the front of the line say that apparently the mochi sets weren’t free but that they were free with purchase.  What?!  I thought this was a free giveaway.  >=( …  We were fine to purchase an item and receive the free mochi set since we were already there, but I immediately felt deceived and slighted by the campaign.

I knew the contact person for Sweven Media and messaged him right away to inquire.  He confirmed with me a few minutes later that indeed the “free mochi set” was only given if you made a purchase……  Thus, that’s why they had deliberately used the word “customer” in their promotion. …

I felt this was a very sneaky and deceptive marketing ploy and took advantage of people’s inattentiveness by using the word “customer” and “free” in the same campaign and being vague about the giveaway criteria.  If it was the case that the mochi set wasn’t going to be given for free (where the definition of “free” = no purchase), they should have stated in their campaign, “BUY ONE GET ONE FREE” instead.  That’s what the campaign really was, NOT a free item.  It’s so tacky to use just one word in the campaign to mislead their followers like that.  In my opinion, it’s especially sneaky as it was their opening weekend and they probably wanted more people to show up than if they had promoted themselves differently.  At the end of the day, it’s not right.

It gives a bad impression of Meet Fresh before people even try the product.  It angers the consumer who shows up because they feel deceived.  I know I was and so was another foodie who I ran into who was there as well.  Don’t say something is “free” unless and until you actually don’t have to pay to receive it.  Shame on you, Meet Fresh and Sweven Media.

Anyway, it took a while (20 minutes) to get to the front of the line to make an order with the cashier.  There was only one cashier which was why the line took so long to move up. 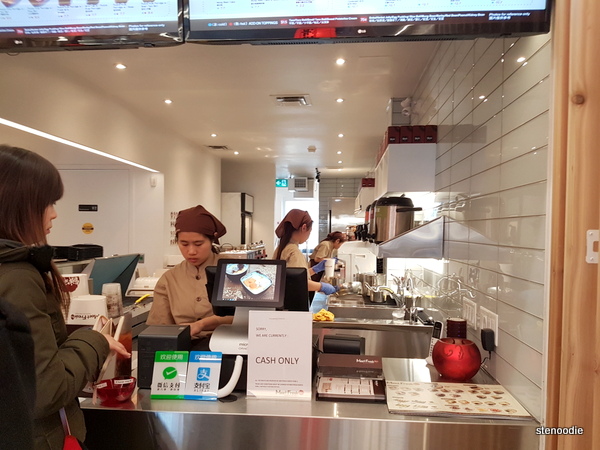 Only one cashier working 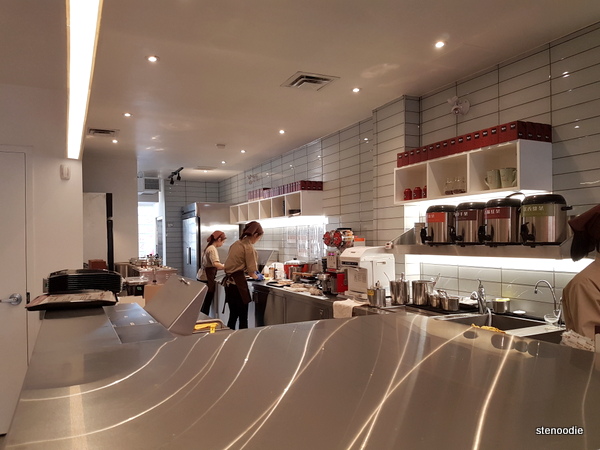 We ended up ordering the Meet Fresh Signature in order to receive the “free mochi set”.  Ugh.  *cue eyeroll*. 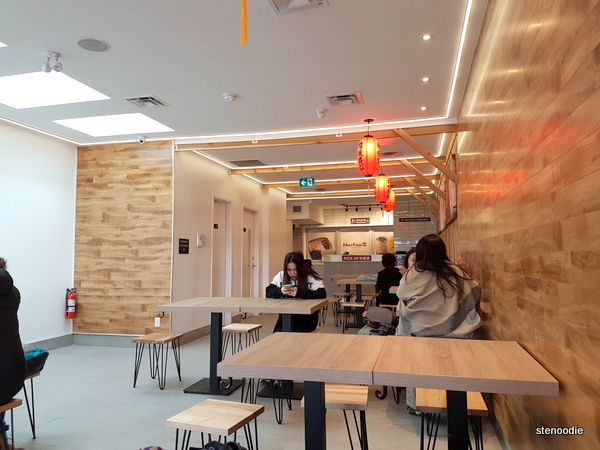 After placing the order, the cashier asked if we wanted the order to-go or to dine in.  I wanted to dine in.  The cashier told us to take a beeper and then head upstairs to the dining room to wait for our order.  I thought it was a little confusing since it wasn’t clear from entering the restaurant at first that they had a dining room at all.  We finally found the staircase that led to the upstairs dining room.  The dining room was clean and modern with lots of tables and seating.

The Q Mochi Set came in eight with four of them in a white colour and the other four pieces in a darker colour.  Their menu doesn’t actually explain what it is other than it is “Q Mochi”.  We liked the lighter colour mochi more.  It was very chewy and soft and I was impressed with the quality of the mochi!  The darker coloured mochi was harder in texture. 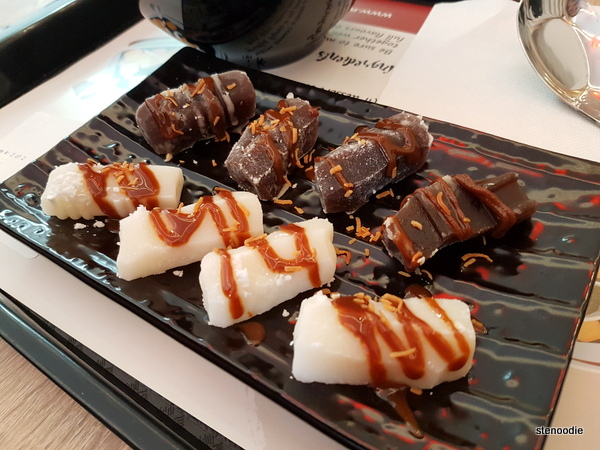 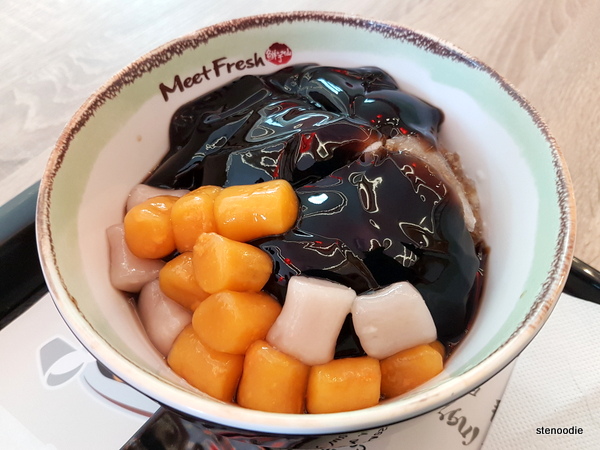 The Meet Fresh Signature contained sweet potato and taro mochi balls, grass jelly, and some shaved ice at the bottom.  It wasn’t until after we left and I had looked at some photos on social media that I realized that the staff completely forgot to give us the container of cream used to pour over the bowl when eating it.  Ugh.

When we finished the desserts and left, there was no more line-up out the door.  I’m not surprised there was no longer a line-up. …

Even for us, if we had known beforehand that we had to pay in order to get something, we wouldn’t have bothered to come.  So, Meet Fresh, you won by luring us into your store but you lost by creating a terrible impression for yourself.

I really hope future campaigns by other restaurants will not be as deceptive and sneaky.  From now on, I’ll also pay extra attention to how a marketing campaign words their “free giveaways”.  Fool me once, shame on you.  Fool me twice, shame on me.  I hate it that society has become this way in terms of making money.