Dinner at Allium Restaurant in Ottawa! 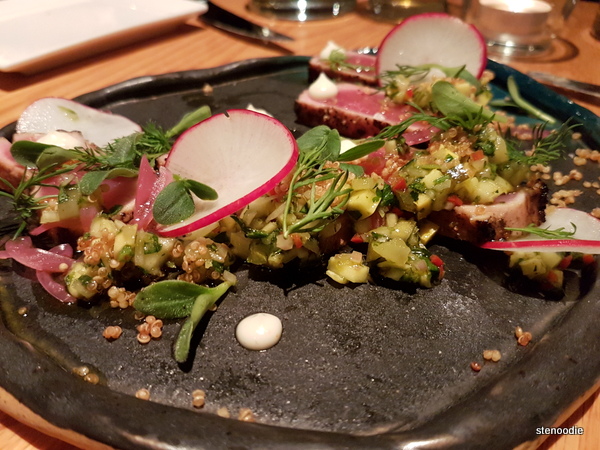 For an early Valentine’s celebration this year, my boo booked a restaurant ahead of time for us in Ottawa.  I didn’t know where or what cuisine it was, so it was a complete surprise. ^_^ Yay! 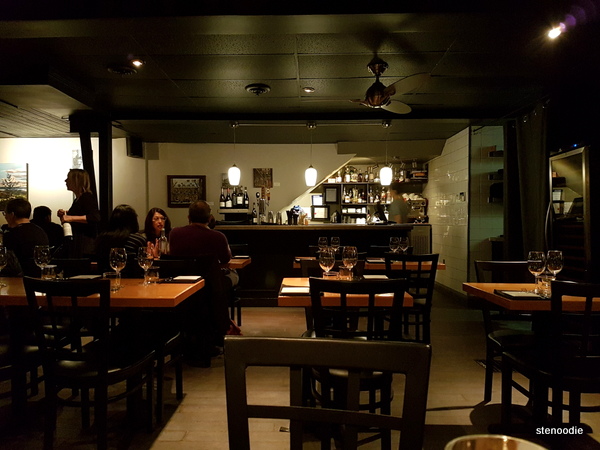 The interior facing the bar

We weren’t sure if the restaurant would have parking in the back but we were right to turn in to take a look because they did have available parking for us.  Yay!  Otherwise, we would have had to park on the street and it seemed fairly tricky given that it was peak dinner service hour at 6:30 p.m.

The host took our coats for the coat check and led us into the dining room for our table.  It was so nice inside! Our server that night was very warm and attentive and friendly.

Allium Restaurant boasted an extensive drinks and wine selection — the pages in the menu go on for more than the actual food menu!

I liked that they had a “surprise appetizer” and “surprise dinner” choice as well as wine pairings for the entrées. 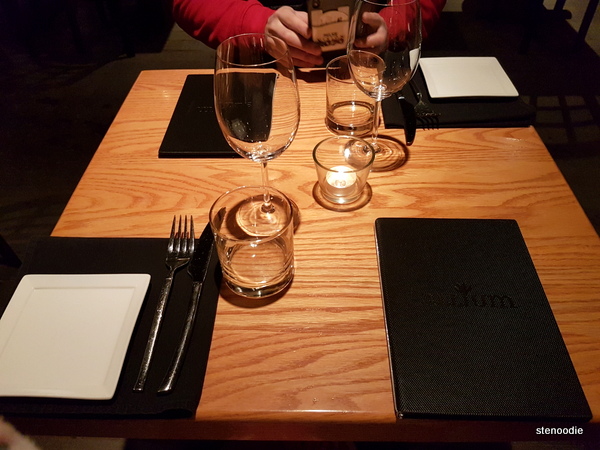 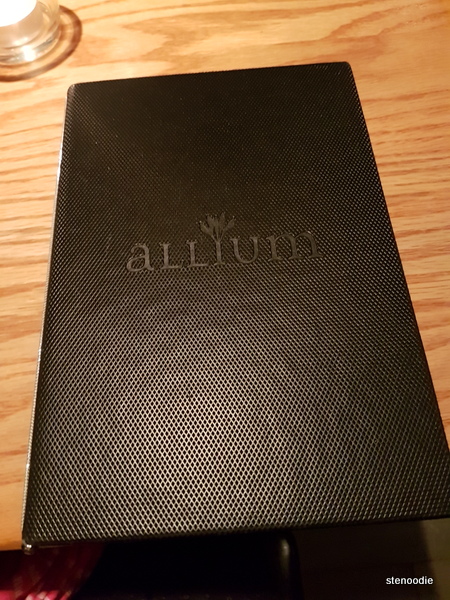 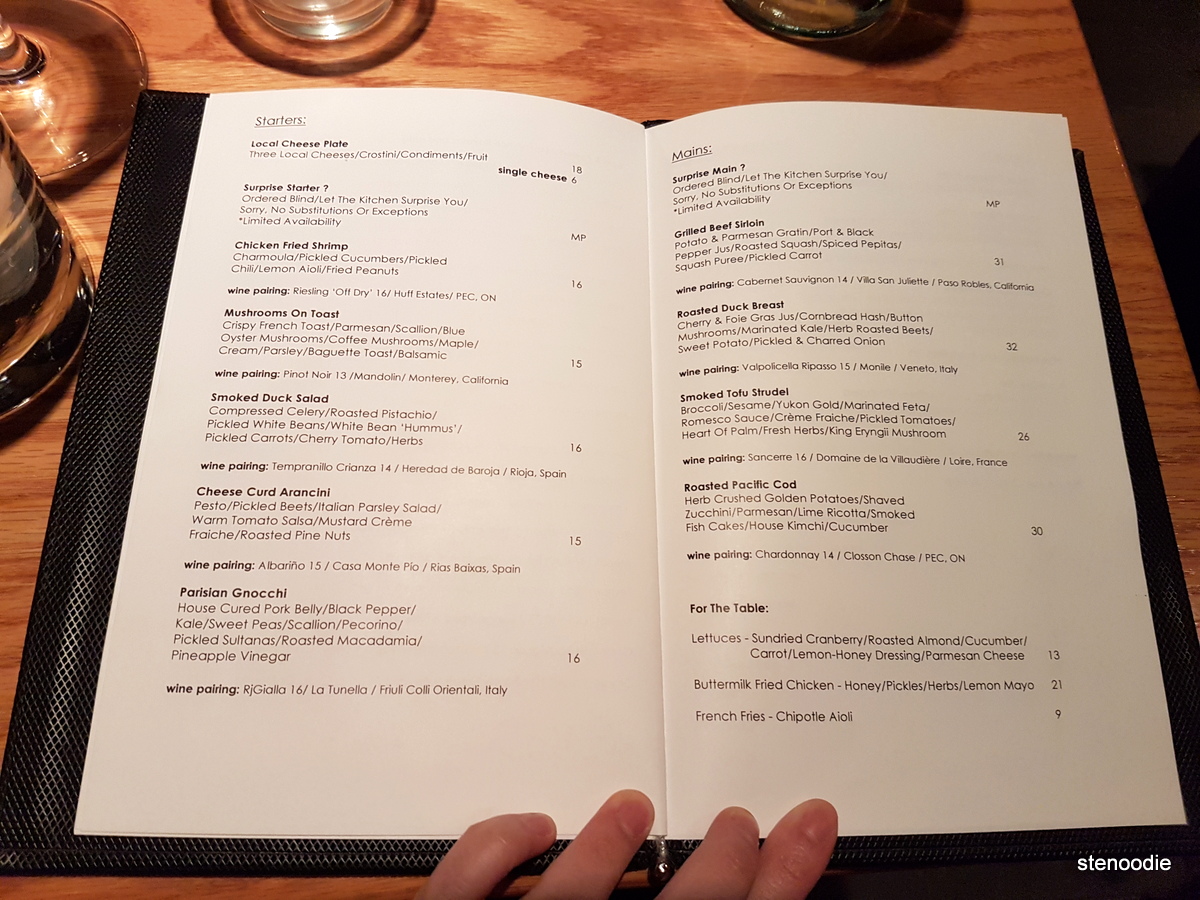 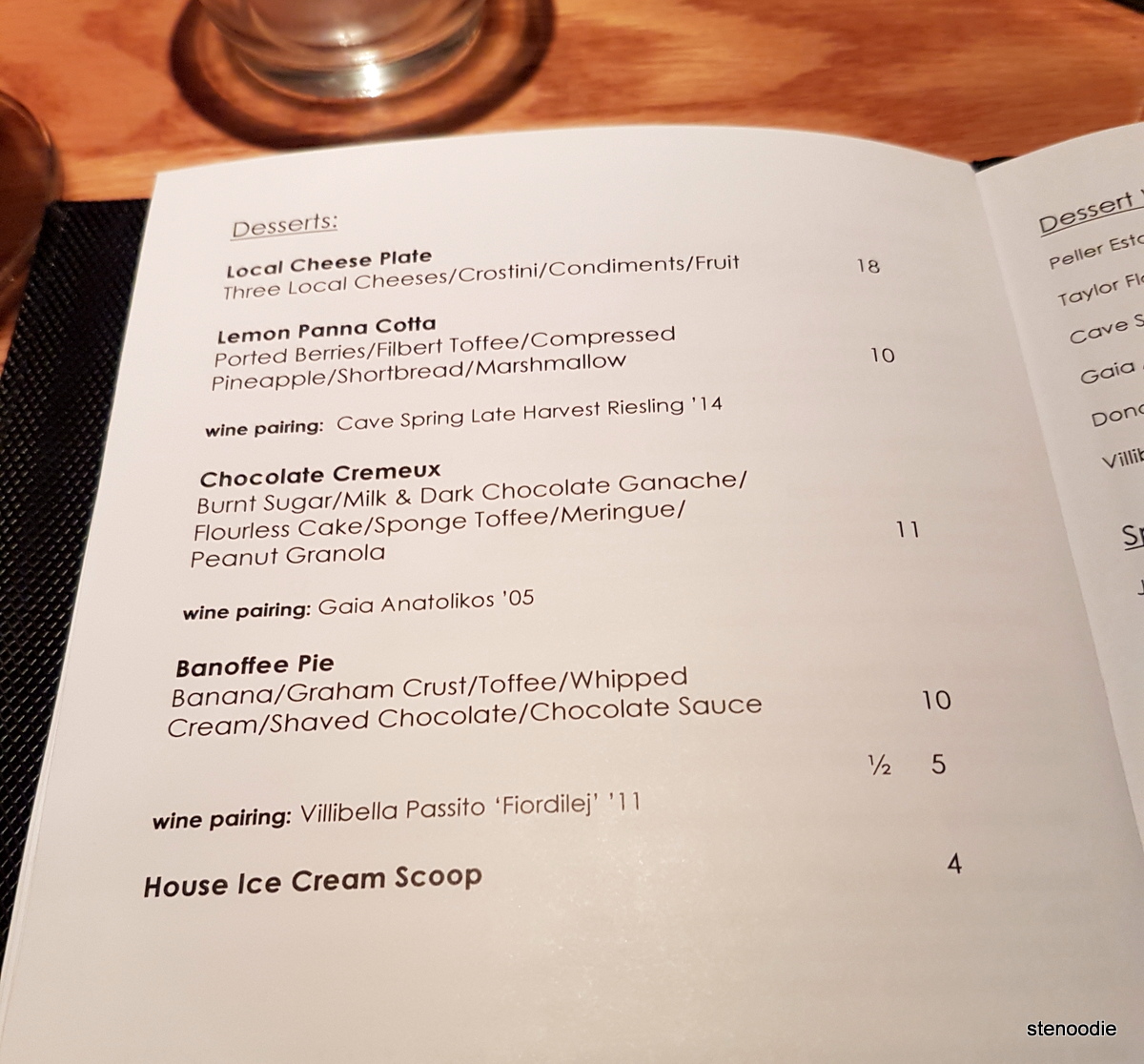 For our appetizer, we went with the surprise appetizer.  When we asked our server about it, she said she could only tell us the price but that everything else was a surprise.  The only other restaurant I’ve been to that has had a surprise on their menu was O Noir. 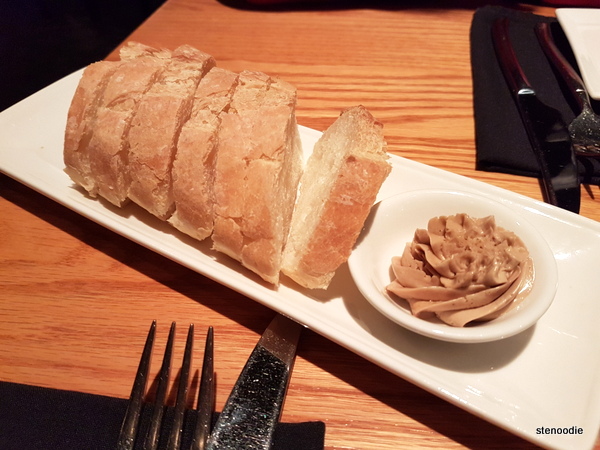 After ordering, we received a fresh loaf of sliced bread with a brown sugar butter with balsamic.  This was so interesting to have a brown sugar butter!  It definitely tasted sweet but was very smooth.  I liked how the bread was light and airy.  I was hungry and inhaled quite a bit of the bread. 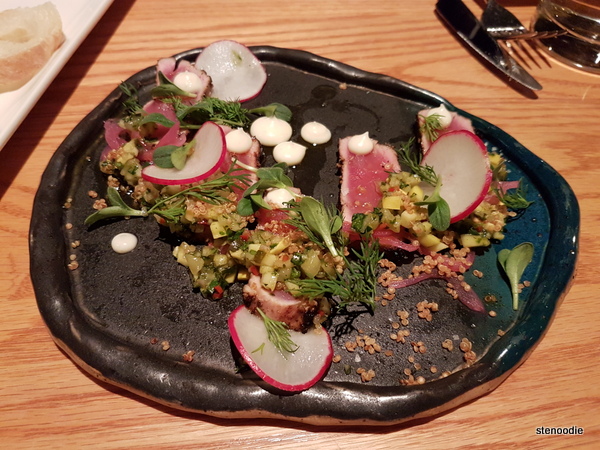 The surprise appetizer turned out to be a Tuna Tataki.  It was artfully assembled with so many intricate details and ingredients all over the platter.  It was like a forest with the herbs and greens.  The server described every single item for us on the platter, but I definitely didn’t take it all down to memory.

The taste of the tuna tataki was superb!!  It was probably one of the best I’ve ever had.  The tuna was seared so nicely that the meat was soft and tender.  It was seasoned just right.  I especially liked the quinoa (so unique) since it provided a satisfying crunch to the dish.  The blend of the flavours of each ingredient worked together so well too. 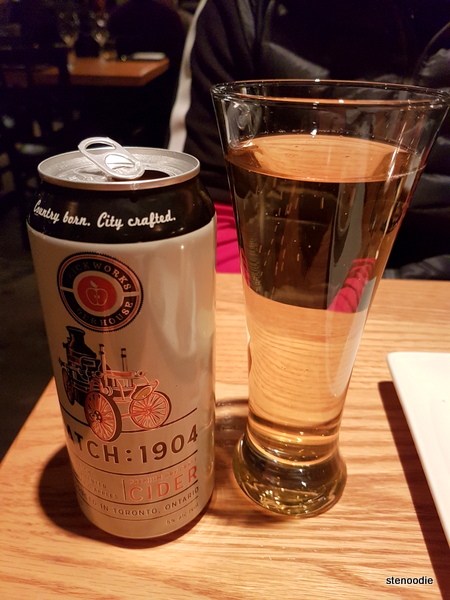 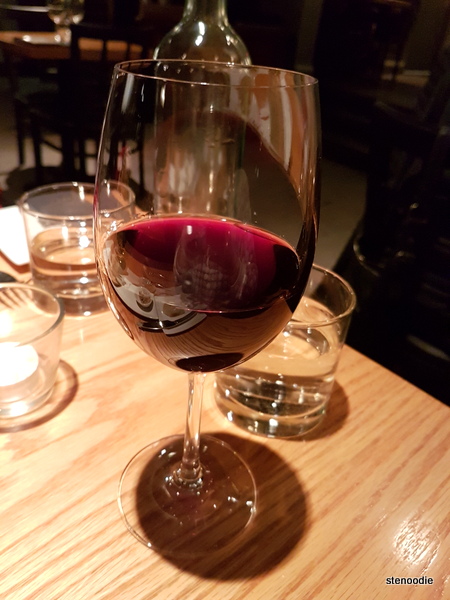 I had a Californian Cabernet Sauvignon red wine pairing with my entrée that I loved.  It was so rich and smooth! 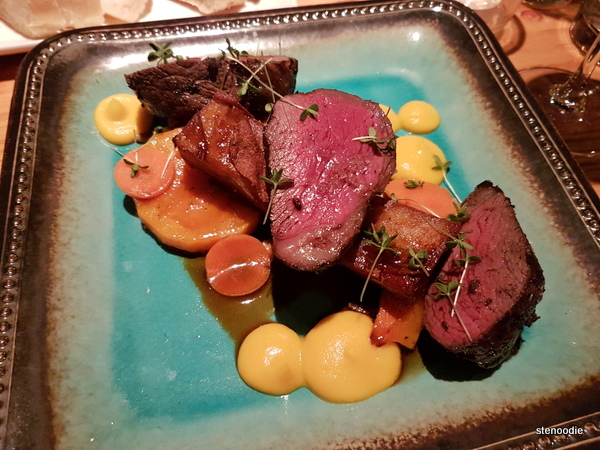 The Grilled Beef Sirloin didn’t disappoint in terms of its presentation.  It was another arty plate! 😀  There were three pieces of the beef sirloin with a healthy red medium rare centre as I requested, dollops of puréed squash, thin slices of pickled carrots, and a “log” of a potato and parmesan gratin.

The beef sirloin was gorgeously grilled but was a tad rough for my taste.  It did take me a while to slice it up and chew through each piece.  I still liked it though.  The gratin was very yummy as were the veggies on the plate.  In all, it was a much bigger portion than I ever expected. 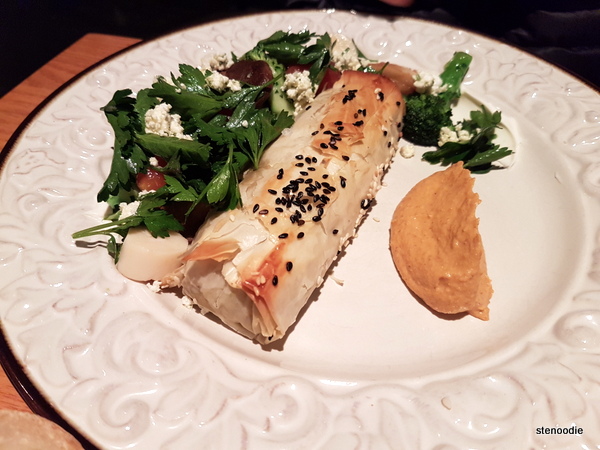 On the other hand, Ken’s Smoked Tofu Strudel was amazing and so worth ordering!  It had broccoli, sesame, yukon gold, marinated feta, romesco sauce, crème fraiche, pickled tomatoes, heart of palm, fresh herbs, and king eryngii mushrooms.  It was creatively plated too but not as pretty in colour as mine.  However, the tofu strudel was out of this world in terms of taste!  It was a flaky pastry with the tofu and cheese and veggies all wrapped up in it.  It was soo tasty!!  If I had an alternate reality twin, I would have told her to order that instead of the Beef Sirloin. :’)

My dish was so large that I was so stuffed by the end.  We couldn’t even have dessert since we were so full.  Ah well :). 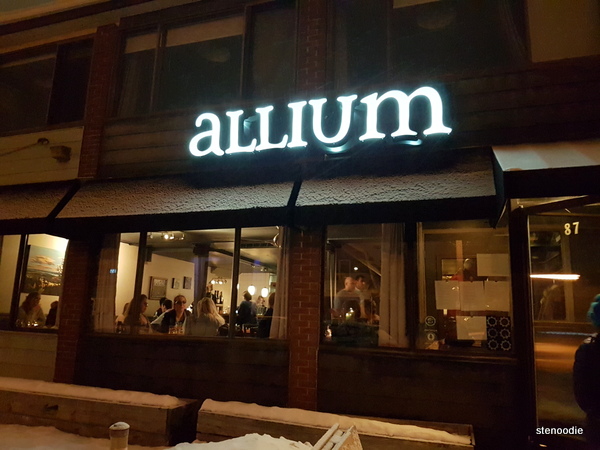 I loved the service, ambience, and beautiful attention to the plating at Allium.  When the cheque came, the business card noted that the chef and owner of the restaurant were one and the same.  I loved how the prices for this fine dining meal were so reasonable too!  Our total was only $100 ish considering we had an appetizer, two mains, and drinks too.  For something of this calibre,  I would have expected a higher bill. 🙂  Allium Restaurant is definitely worth visiting! 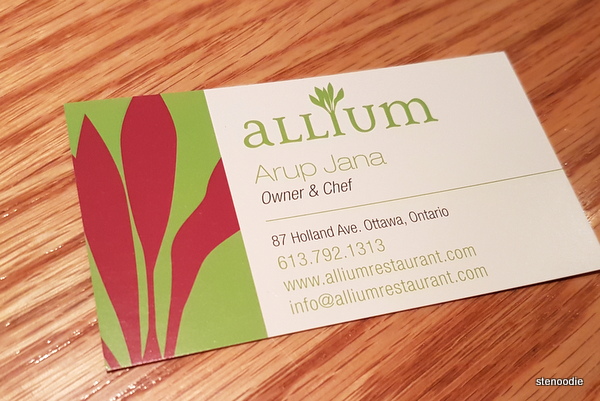 Business card tucked in with the bill

Thanks to the bb for booking and finding this gem of a restaurant in Ottawa! ^_^

2 Responses to Dinner at Allium Restaurant in Ottawa!