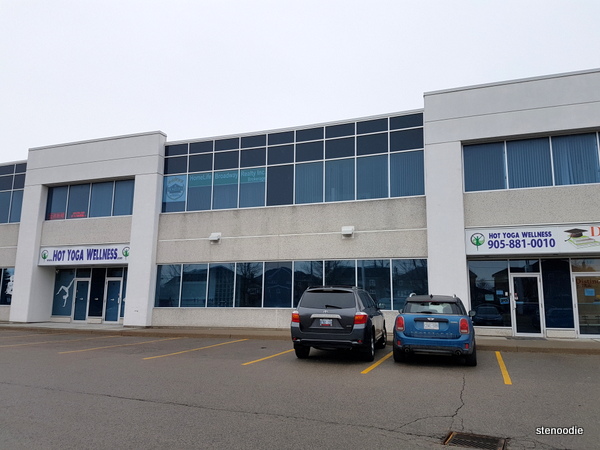 January 22, 2018:  I finally redeemed and activated my Groupon voucher for a five-class pass today just days before it was going to expire (why do I always leave things until the last minute?  XD).

I called Hot Yoga Wellness Richmond Hill first by phone to inquire about going to the class and about the Groupon voucher.  The lady, who sounded very pleasant on the phone, simply told me to show up and that’s it.  She did say I could go on to their website to create myself a file first which would cut down on the paperwork that I had to do once I got there.

I was already on their website since I was checking and looking at the schedule and what types of classes were available.  I created myself an account in less than 3 minutes (they used the same system as Moksha Yoga Markham) and thus it was very familiar and easy for me to use.

I was excited about trying this new hot yoga place out since it was just about 10 minutes’ driving away from me.

I arrived early to the class as the lady had suggested to me since she said the 8 p.m. time slot was usually quite busy.  I left my shoes in the foyer and then walked into the space.  The reception desk was where the same pleasant lady who had spoken to me on the phone before was.  I reminded her of having called before and paid the $5 service fee and she redeemed my Groupon voucher to me.  She briefly explained where the women’s changeroom and practice room was and that there were no electronics or electromagnetic items allowed in the practice room.

The women’s change room was quite large with many shower stalls.  I liked the roundabout layout of it.  They didn’t have any lockers so if you are concerned about leaving your valuables in the open change room, you could always leave them in your car or leave your cell phone at the front desk too.

The practice room was already filling up with people when I entered about ten minutes to class time.  As always, I took my spot in the back since I’m still a beginner yogi despite yoga being not a first time exercise for me.

My first class here was instructed by David.  I was surprised with this class because it was a lot more technical and difficult than any of the other yoga classes I’ve been to despite it being a regular ‘Hot Yoga’ session.  We did handstands and practised the “crow” pose as well as other positions that were quickly assumed.  The instructor must not be used to a lot of beginners or that the classes tend to have a lot of intermediate students?  I also found it interesting that the music choice, while slow, contained lyrics or were slow versions of pop songs that I knew.  I remember in previous yoga classes, usually the music is way more slower and purely instrumental in nature.  It was quite interesting.  This is why I like going to different yoga studios and following different instructors because every experience is different.

I’m looking forward to the rest of my four classes here!  I love how close the studio is to me!

I also love the feeling after yoga because I feel like I can breathe so much deeper than before and I’m so much calmer.  I even drive slower and feel less affected by the outside environment after being in a heated and calming space for an hour.  It always makes me think how more people should do yoga and by doing so, maybe there would be less conflict in the world.  At the same time, it’s not a form of exercise I particularly enjoy a lot because it is difficult (and pricey without the Groupon deals), so it’s more of an on-and-off seasonal exercise, I find.  Hmm.

Both sessions today were taught by Katie Phang.  I really liked Katie’s approach to teaching the class.  Her voice was very soothing and she was clear in her instructions.  She was lively and gave a lot of life to the class as well.

Although the two sessions were different in description, since they were being taught by the same instructor back-to-back, I did notice similarities between the two.  For example, the core practice was the same.  That’s not to say that I didn’t like the sessions too.  I found them challenging and satisfying. 🙂

February 20, 2018:  This morning, I went for my fourth yoga class at Hot Yoga Wellness.  I chose the 6:30 a.m. class since I was running low on available time slots in my schedule and this early morning class was the best fit for me.  It was the Vinyasa Flow class held by WenLi Yang.  I arrived early to the yoga studio by 6:15 a.m. and it was so nice and peaceful in the morning with nobody but the instructor around.  There were already a couple of yogis inside the practice room though.  This class was not as hot as the other ones I’ve been to.

I found that WenLi took the class through a different approach despite it being a Vinyasa Flow class that I had taken just yesterday.  It resembled more of a Hot Yoga class that I had done before with very many familiar poses.

It was a good stretch workout and I could feel the sore spots from yesterday’s workouts a lot.

My question to fellow yogis:  How to you prevent your palms and knees from being bruised up/having towel burn from doing downward dog poses and other ones where you have to push your body weight on to those sensitive areas?  My elbows are a bit bruised as well…

I can really feel the soreness in my abs, upper ribs, and thighs from yesterday’s two sessions.  Yay! 🙂

February 21, 2018:  To complete my five-class punch card, I attended the 9:30 p.m. of “Hot Yoga” with WenLi Yang again.  This was their final class of the day and I was so glad that I was able to make it here and not waste my purchase before I had to leave on my trip the next day.

It was another good class to stretch and complete poses that I was familiar with.

It’s too bad that I procrastinated so badly and ended up using four of my five classes in the last week all squished together. XD  I’m so bad at these things.  If I had spaced out my time, I would have loved to attend the Yin and Core classes.  I loved practising Yin at the Moksha Yoga Markham.  Hopefully Hot Yoga Wellness will have more Groupon deals in the future for not just new students but students who had been there before too. :3