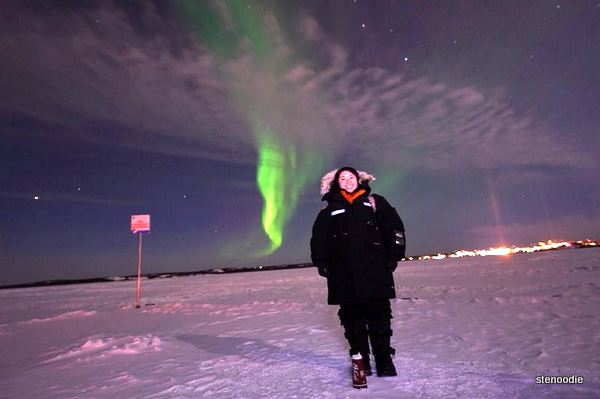 Attempt #1 at seeing the Northern lights in Yellowknife was a success!

Omg today was amazing!  I got to cross off/achieved another bucket list item — to see the northern lights!! ^_^

The trip started bright and early in the wee hours.  Our flight to Yellowknife was preceded by a stopover in Calgary first.  The flight from Toronto to Calgary was at 6:35 a.m. which meant we had to leave our homes by 4 a.m. in order to get to the airport early to “hurry up and wait”.

Unfortunately, I was finishing up my Hansard work at night, redeeming my final yoga class, and 2 more transcripts (and pack!) before I could leave my house.  Thus, it was a no-sleep night. 😦

Once I boarded the plane, I was out like a light. 😀 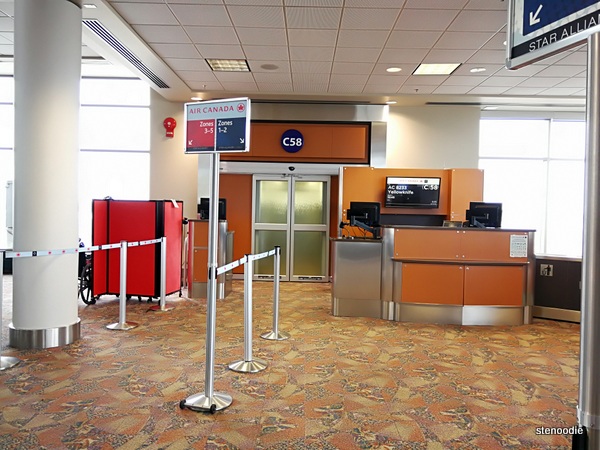 Flying out to Yellowknife!!

The flight was about 4 hours.  We stayed at the Calgary airport for about 45 minutes before we boarded a smaller plane to our final destination, Yellowknife.  We were served complimentary drinks on this flight.  I got a window seat and it was fascinating to look outside at the changing landscape.  It transformed from snowy cityscape to barren lands covered with more snow, lots of small lakes to dense trees.  It was cold and snowy, all right. 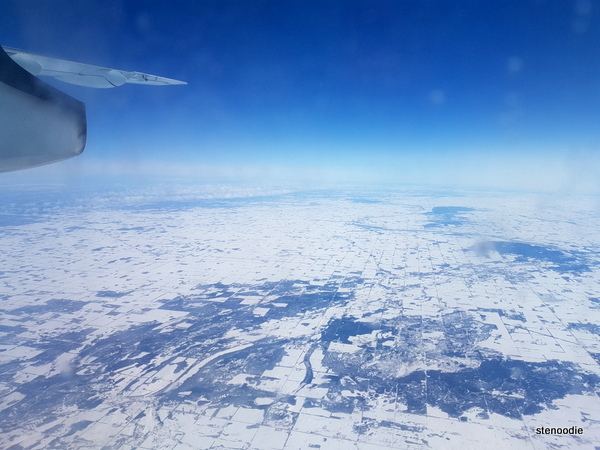 I’ve never seen the view from the plane like this before. So much nice and devoid of civilization!

Arriving on the tarmac of Yellowknife Airport, we had to walk from the plane directly to the airport.  The airport was small but oh so Canadian with a polar bear and inukshuk in the baggage claim area. 😀 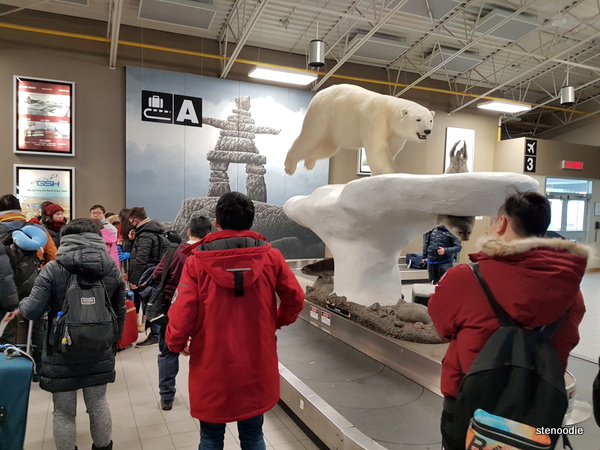 Our tour guide greeted us and we were taken directly to the hotel, Chateau Nova, just a few minutes away.  Yellowknife is small so it made sense that the trip to the hotel was so short. 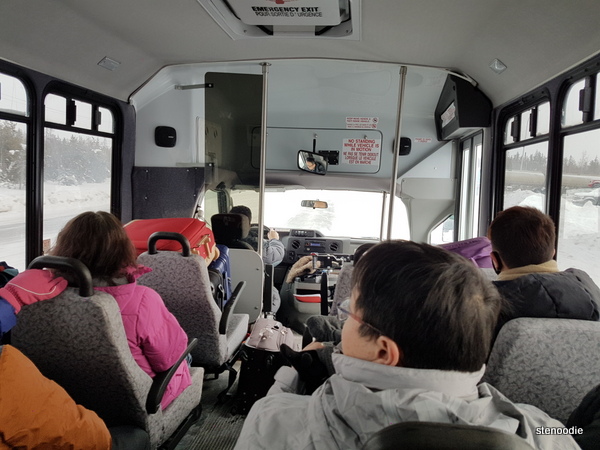 Our tour guide was also the driver

The hotel was so large, modern, and upscale (view my review of the hotel here).  We checked in and shortly after, our group reconvened to go in search of a restaurant for our lunch/dinner and the local grocery store.  Google Maps alerted us to a Vietnamese restaurant and that’s where we went. 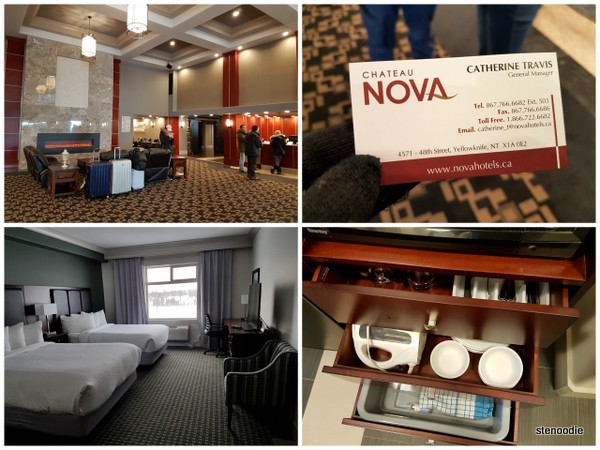 Walking alongside the street, my eyelashes froze!  It was -21 degrees outside and felt like -35.  Wow!  I had double layered pants and a thick sweater underneath my winter coat.  A hat, mittens, neck warmer, thick thermal socks, and winter boots also kept me reasonably warm. 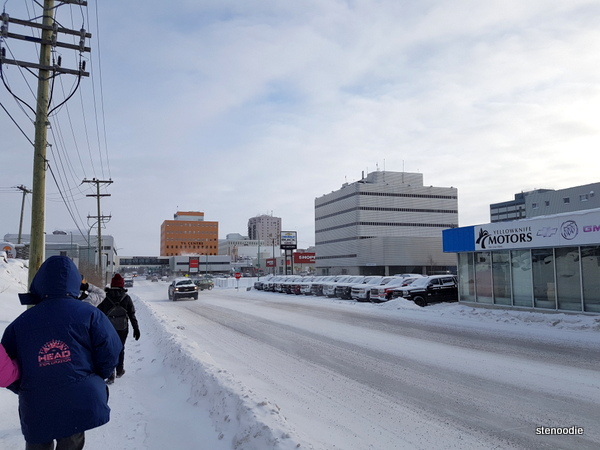 Walking in -35 degree from the hotel to the restaurant 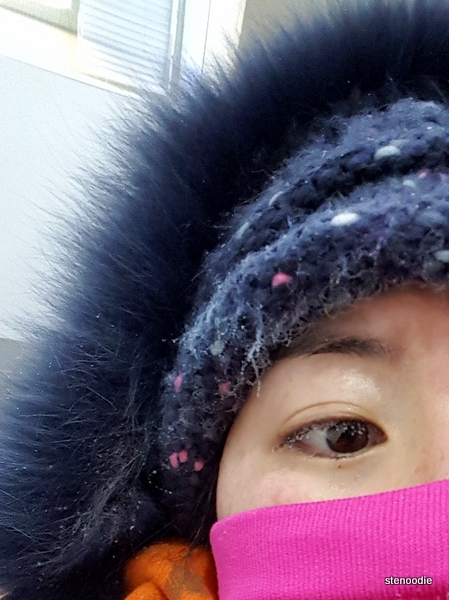 The Vietnamese Noodle House served good food and I was satisfied with the meal.  You can read my full restaurant review here. 😉 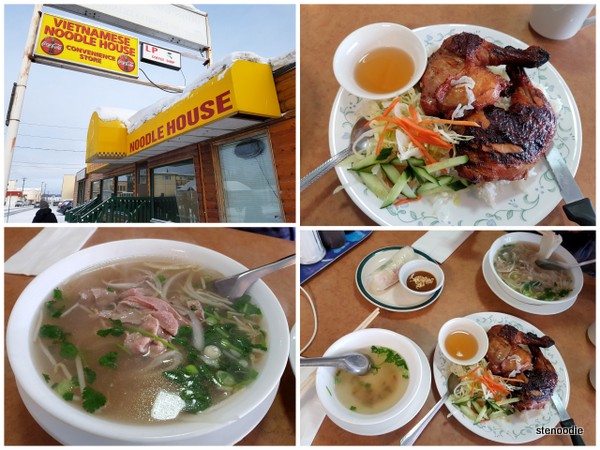 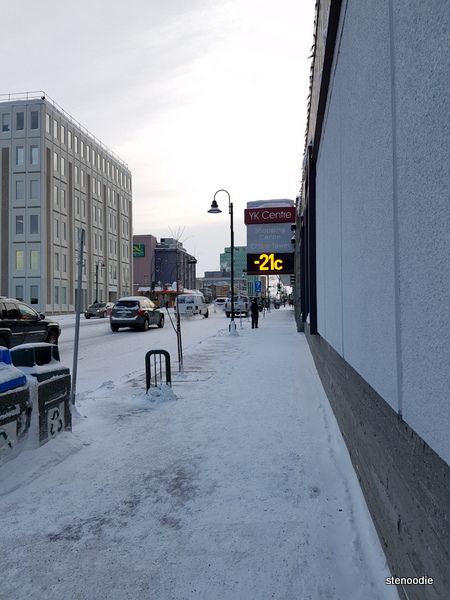 After our “linner”, we browsed the Independent branded grocery store.  Thankfully it was a large supermarket like Loblaws and had so much in stock — fruits and vegetables, premade sushi sets, salads, bread, frozen section, a hot foods section, dry goods, and anything else you would find in a big grocery chain.  The prices here were higher than in Toronto so we made our choices sparingly. 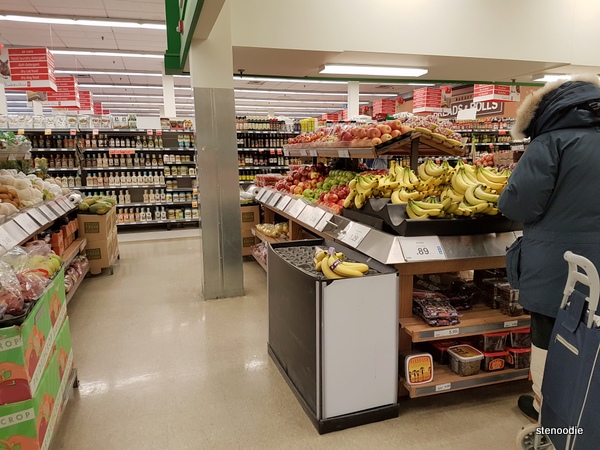 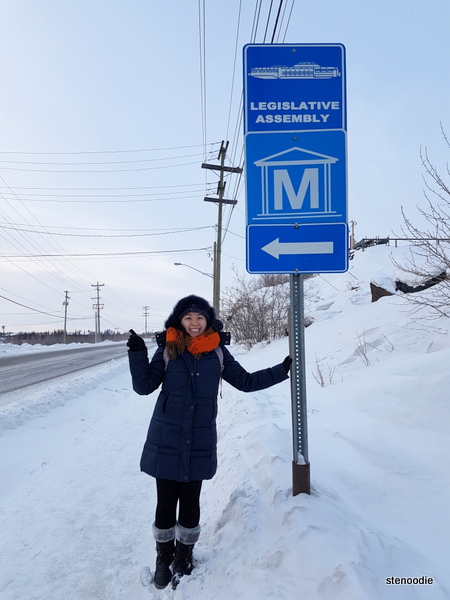 Sign to the Legislative Assembly of the Northwest Territories

When walking back from the supermarket to the hotel, I noticed the sign that pointed to the Legislative Assembly of the Northwest Territories.  This excited me immediately and immensely.  Even upon arriving, I found it so surreal to be in Yellowknife and recognizing so many streets and places.  I’m part of the Hansard Blues transcription team and regularly participate in transcribing the proceedings for the Northwest Territories Hansard.  Thus, for me to see the Legislative Assembly building sign was so surreal.  I had to take a photo.  Also, because we transcribe the sessions from the parliamentary members and ministers, Yellowknife was the first place I’ve visited where their commonplace places were already familiar to me.  For example, I already knew of Frame Lake, The Ingraham Trail, and the Prince of Wales Northern Centre.  So cool!!

We returned back to the hotel to rest before our 9:30 p.m. departure to chase the Aurora Borealis lights.  I enjoyed watching the Winter Olympics where we won double gold and silver medals for women’s ski cross and the women’s free skate competition too. 😀 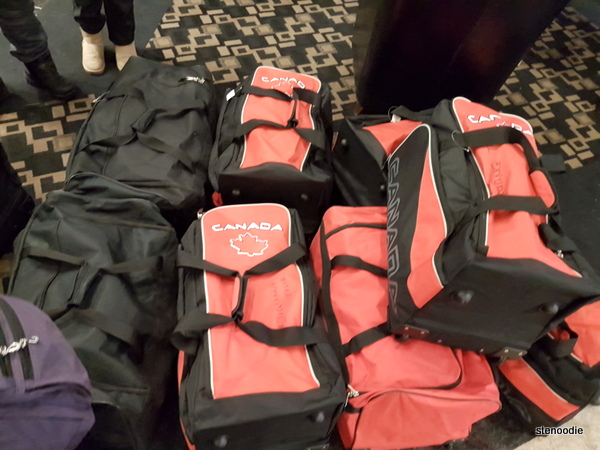 All of our rented winter gear. Each person had their own carry bag 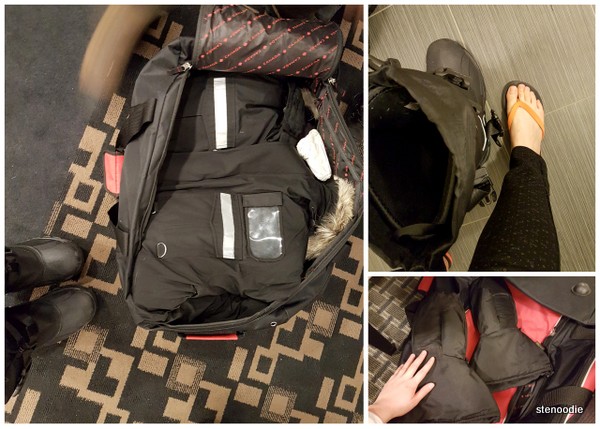 Winter gear was so oversized! Look at the size of my gloves and boot

We also received our rental polar wear at this time.  It included a Canada Goose jacket, Canada Goose snowpants, Sorel branded winter boots, and gloves.  Rental for three days was $85 a person.  I initially thought that my own winter gear was sufficient to last the Northwest Territories cold but after trying on the rental gear, I was so glad we made this choice!  The special winter wear was necessary!

We met in the lobby at 9:30 p.m. and boarded another bus where we were taken to see the Aurora Borealis.  I’ve been told that seeing these northern lights is based on luck and timing.  You can stay for 3 nights and not see a single thing or you can stay for 6 nights and see them clearly all 6 nights.  I hoped that we were lucky this time around. 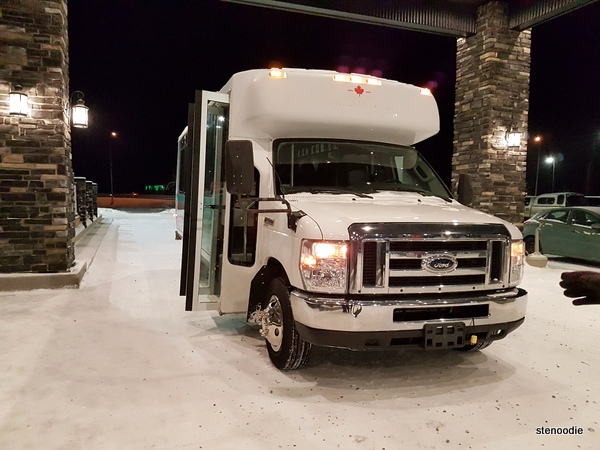 And indeed we were!  Yay!! ^_^  Shortly after boarding the bus, we were told the lights were out in full effect.  We got off the bus after 5 to 10 minutes of driving and alighted to see the gorgeous green and blue lights in a huge thick streak across the sky.  It was beautiful to finally see it with my own eyes! 😀

My sweetie lent me his DSLR camera and I was able to use it to capture the lights.  I definitely wasn’t able to record it with just my phone since the light exposure wasn’t sufficient.

We took some group shots and individual photos with this phenomenal natural light show. ^_^ 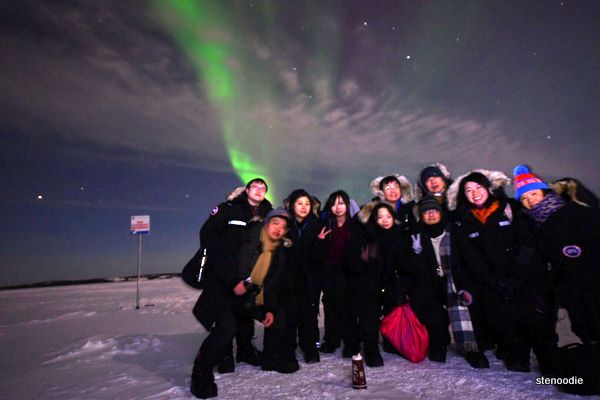 It was cloudy at the first location 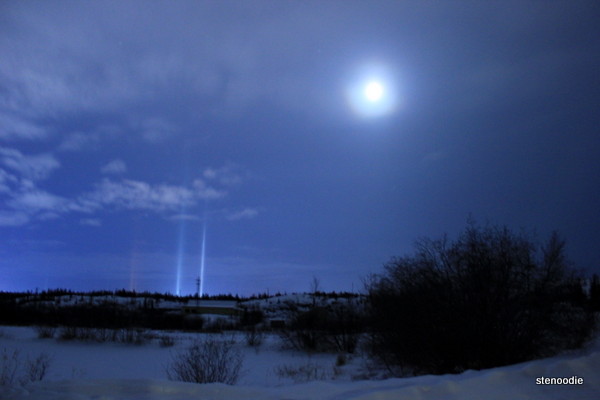 These were apparently polar flares

After this, we boarded the bus again and stopped at another area to see the lights.  This time though, the lights weren’t as vibrant or obvious and after a while, disappeared completely from the naked eye.

We boarded the bus again to rest.  It was freezing outside (the coats helped regardless)!  In between going out for more watches that night, our tour guide served us hot chocolate (or tea or coffee) and maple syrup cookies!  Such a nice way to stay warm and positive! 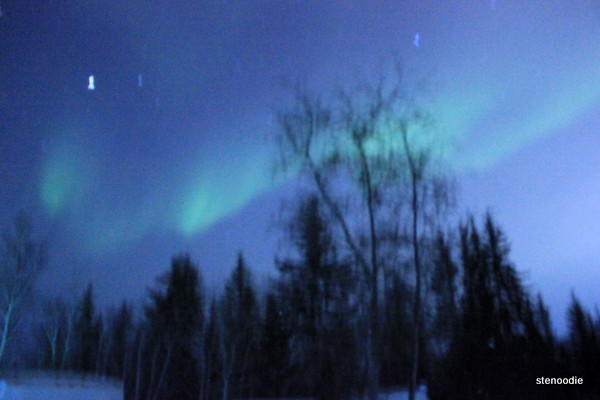 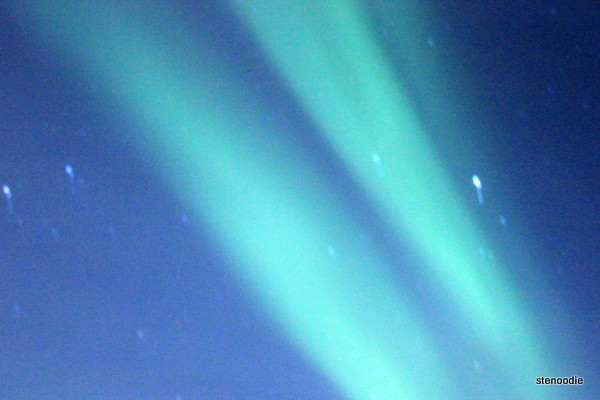 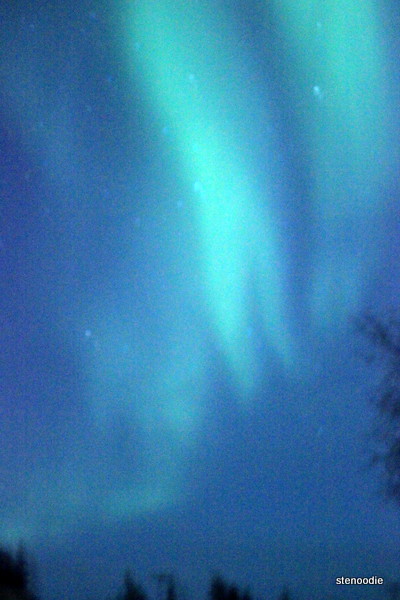 It was dancing for us 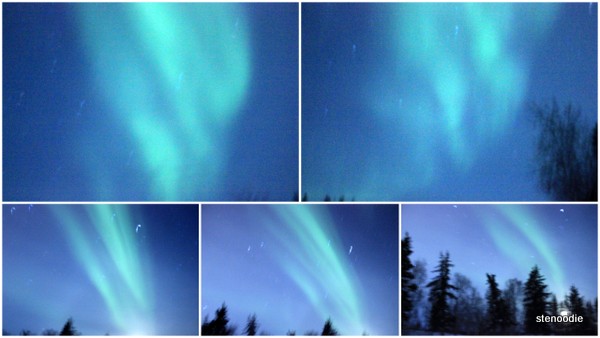 So lucky to get such a clear view at the second location!

We finally completed our Aurora Borealis first night chase by 2 a.m. and returned back to the hotel.  I realized I needed a tripod to better capture the lights on the DSLR but was for the large part so thankful and happy to have caught the lights on our first day!  Super grateful to visit Yellowknife, capital city of one of Canada’s three territories. 🙂  Tomorrow, we go ice fishing and more Aurora Borealis hunting.  I hope we get to try some good local eats too. 🙂

Keep tuning in to view the blog posts for Day 2, Day 3, and Day 4 of my Yellowknife trip. 🙂