The Annual Float Your Fanny Down the Ganny in Port Hope, Ontario 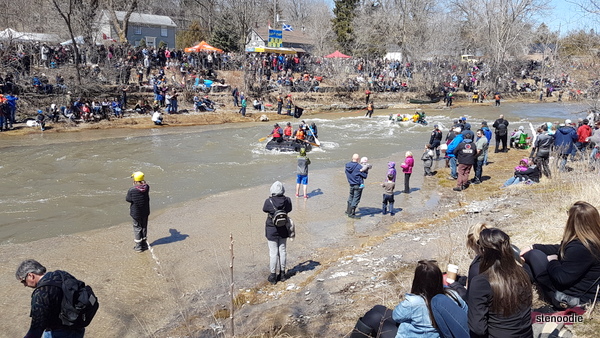 Float Your Fanny Down the Ganny in Port Hope, Ontario

April 21, 2018:  Every year, the town of Port Hope in Ontario hosts a one-of-a-kind commemorative community event called the “Float Your Fanny Down the Ganny”.  Float Your Fanny Down the Ganny is a 10km race along the Ganaraska River to commemorate the 1980 flood that crippled Port Hope’s downtown area.  It’s a most appropriate and creative name as the majestic river that runs through this small town is called the “Ganny” for short.

What happens during this annual event is that participants are befitted in wet suits (or not) and hop on to their homemade unique crafts to literally flow down the river.  Thus, everyone floats their fannies down the Ganny.  It’s truly a unique spectacle that I had never heard of before and seemed something that I think more people should know about.

When Jon first spoke to me about the Port Hope press trips, this was the single highlight event that he wanted me to promote about for their small town.  Browsing the website and seeing some photos, I was immediately curious and excited about seeing this with my very own eyes as well.

This year’s 2018 Float Your Fanny Down the Ganny event was long planned for April 14 and I even mentioned to you all in a previous blog post to bookmark it on your calendar so that you can visit Port Hope to see this event.  Unfortunately, a few days before the actual event day, forecasters predicted a nasty and wintry ice storm for the area that weekend and it was best for everyone involved to stay safe by postponing the event to a week later, April 21.  I’m really glad that they decided to do this because the day of April 14 indeed saw a very serious and dangerous ice storm that caused many accidents on the roads all around the Greater Toronto Area. 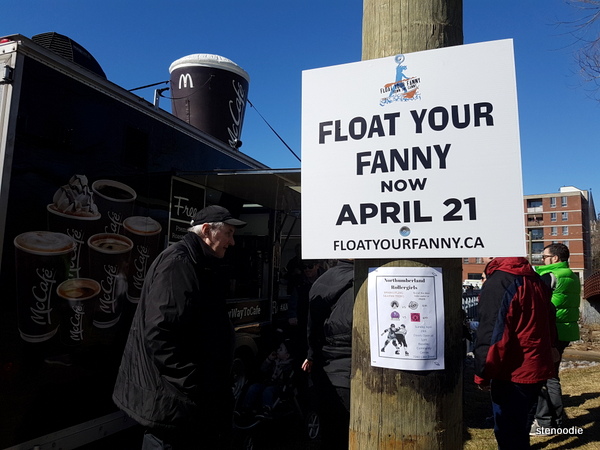 Come the new date of April 21 though, the sun was shining and it was a nice spring day to be outdoors.

My mom and I headed to Port Hope from Markham early in the morning just before 9 a.m.  We wanted to get there early for the 10 a.m. start.  The floatyourfanny.ca website listed an itinerary of the events.  There were three main things to watch for that day: “Canoes and Kayaks”, “Crazy craft”, and a fun “Lucky Ducky race” down the river.

Alongside the Ganaraska River, an area called “Fannyville” was also set up with multiple vendors of merchandise and food and drinks.  There were a lot of family friendly activities as well in this event village. 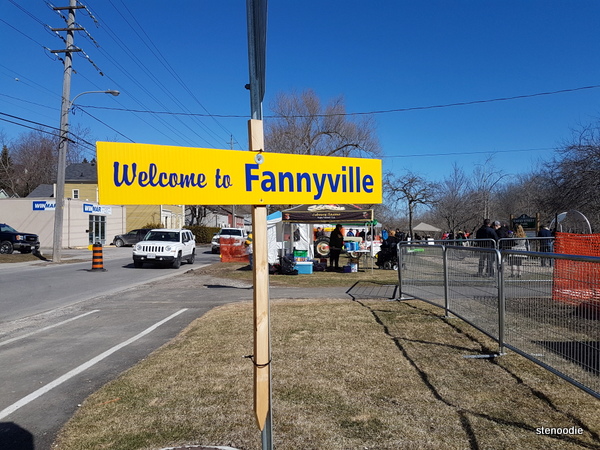 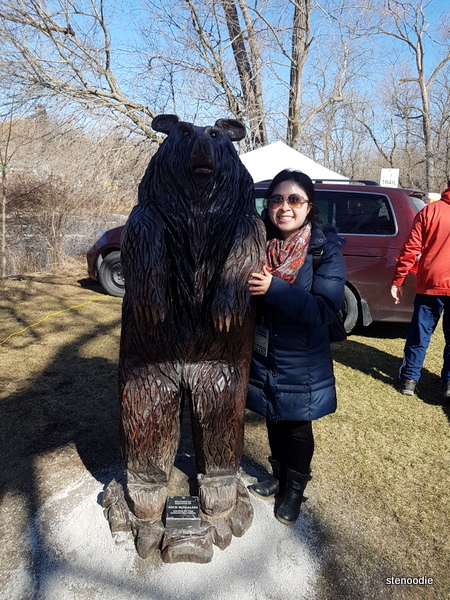 Photo op next to the river 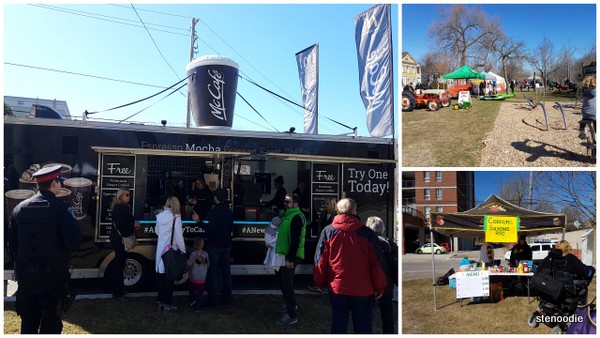 Vendors along the river

As we arrived in Port Hope (which only takes about an hour driving from Markham), I drove towards the finish area at Barrett Street Bridge and Cavan Street, which I thought was the best place to park myself, and found that many other cars had the same idea.  It took a little bit of turning through the roads to find a spot to park on the street.  It was easy to find the finish area after we parked since there were roads blocked off and you could hear the loud music coming from Fannyville.

There were a lot of vendors and we had a fun photoshoot at the Canadian Fire Fighters Museum booth. 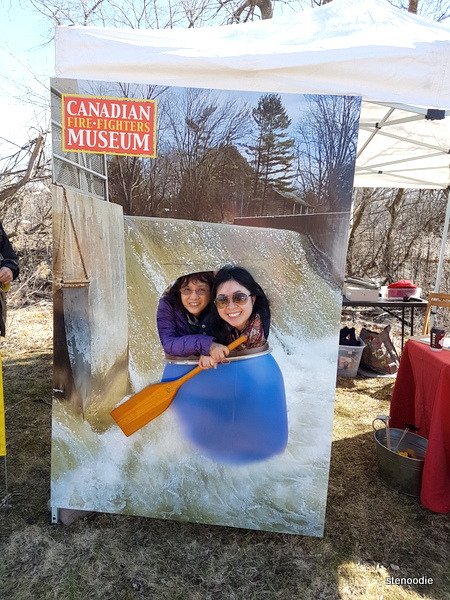 We’re in a barrel floating down the Ganny!

All along the riverside, there were already lots of people gathered to watch the participants who would be coming down the river.  Port Hope had also set up a few stadium style seats.  Others smartly brought blankets or lawn chairs. 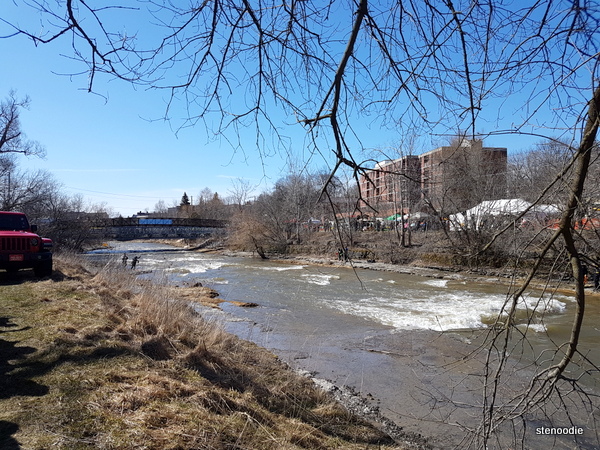 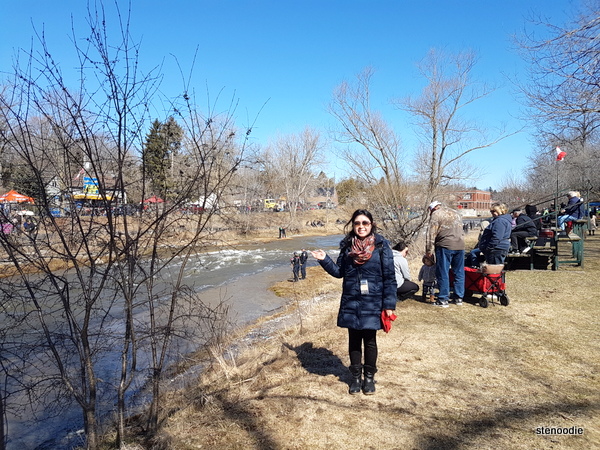 We perched ourselves at a spot near the river and got ready to watch the participants come down.  They really only started coming down around 11 a.m. since it does take time for them to complete the 10 km trek.  Although it was a sunny day, it was indeed breezy at times with the windchill in the air. 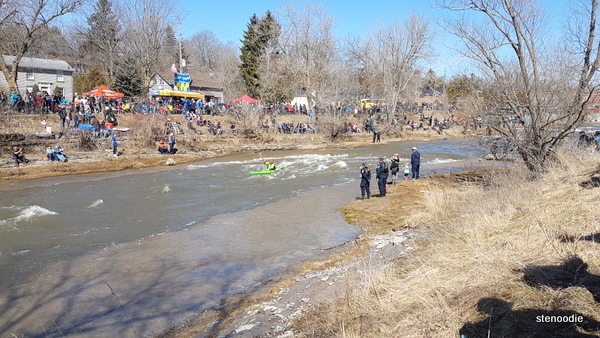 The first kayaker to come down the river! 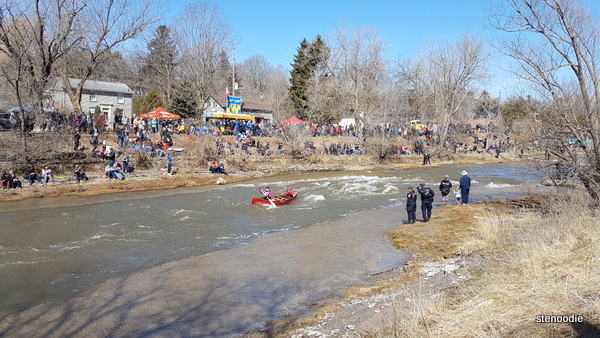 The first canoe to come down the river!

Since the current was running fast (especially with the melting snow), lots of emergency crew were ready to assist.  I saw some crews with ropes tied to their waists reach out to assist the kayakers or canoes who didn’t make a down a particularly challenging river bend. 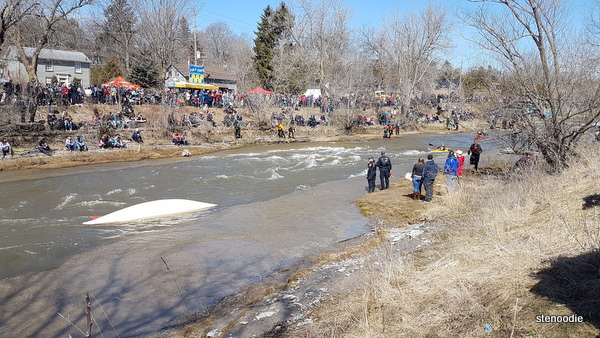 “A ‘crazy craft’ is a craft that has been built from multiple different items and components to form a floating vessel.  Canoes, Kayaks and other inflatable boats, or single component crafts which have not received major modification will NOT be classified as a crazy craft …”

There were a lot of creative ones including one that private themed and another that resembled a chicken.  They also had water guns on them.  Some of the spectators also brought water guns as well.  It was obvious that they had been to a Float Your Fanny event previously!  People all around us cheered and yelled words of encouragement as the participants raced towards the finish line.  There was definitely a sense of community all around. 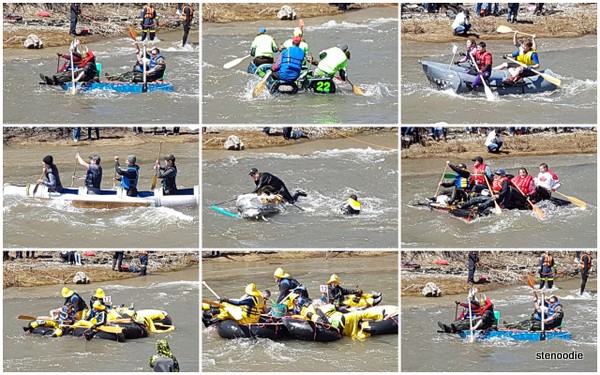 So many types of Crazy Crafts! 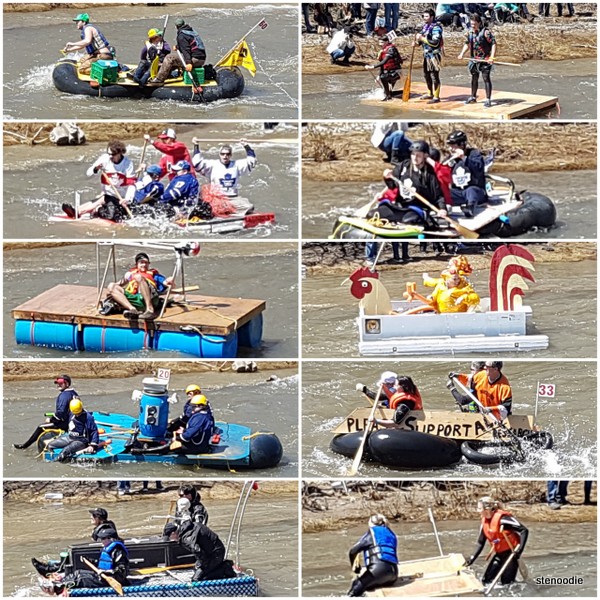 I wonder how long it took to craft each one 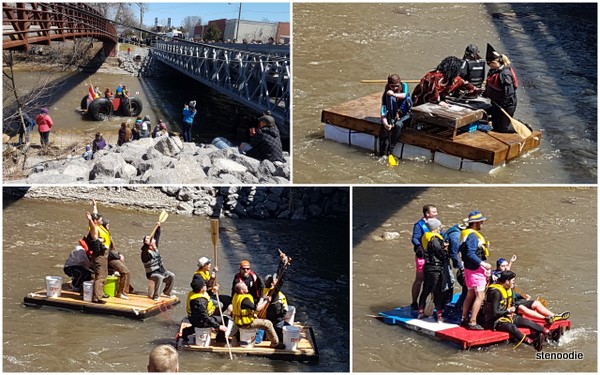 Some more as they ran towards the finish area

The Lucky Duckies race down the river was also so cute!  It was a pool of rubber duckies with numbers on them that were released on to the river.  The winning ducky whose number corresponded to the owner was the winner of the race. 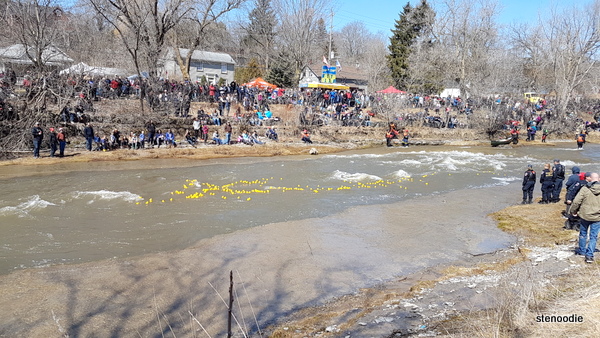 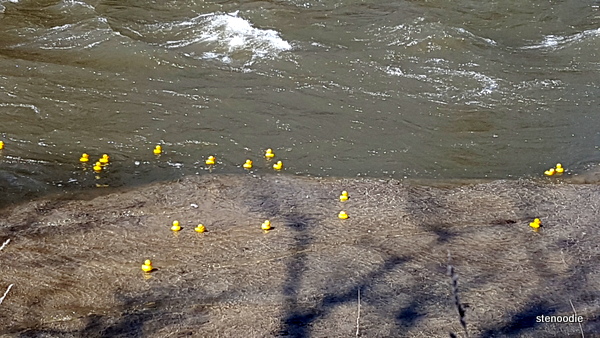 Some duckies got washed ashore

I’m really glad that McDonald’s provided free hot drinks that day.  It was getting quite chilly when standing in one spot to watch the race! 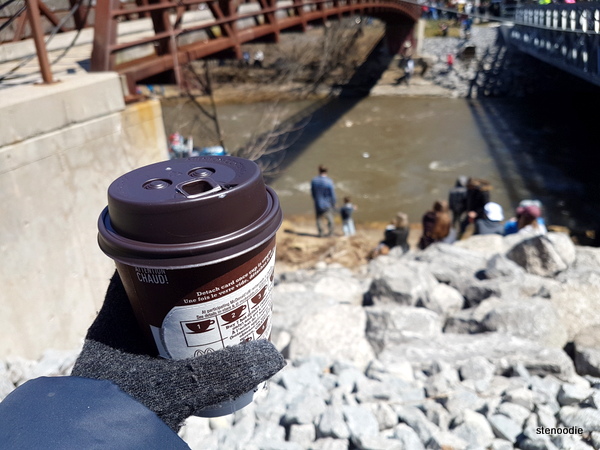 Thank you for the free hot chocolate to warm up on this chilly day!

By 2 p.m., the race had wrapped up and they announced the winners of the race with the fastest times in each category:  Single Kayak, Double Kayak, Single Canoe, and Double Canoe) as well as fastest times for:  Best Costume, Best Design and/or Engineering, Most Number of Crew, and Crowd Favourite. 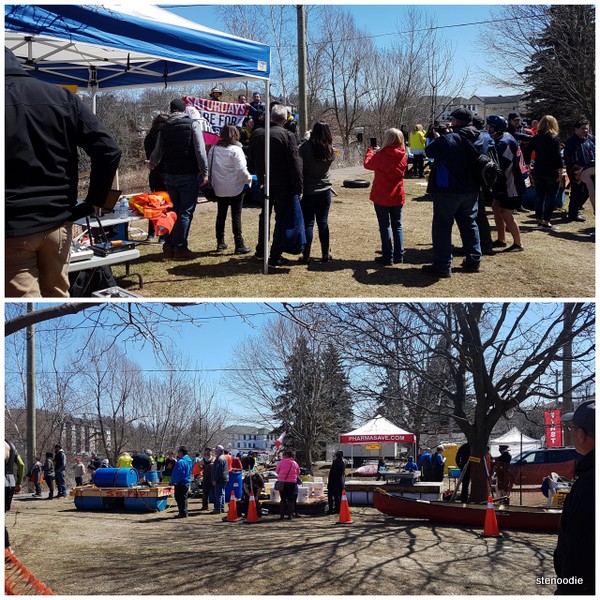 I’m really glad that I got to be one of the spectators for this annual Float Your Fanny Down the Ganny event!  Thank you so much, Municipality of Port Hope for inviting me! 🙂 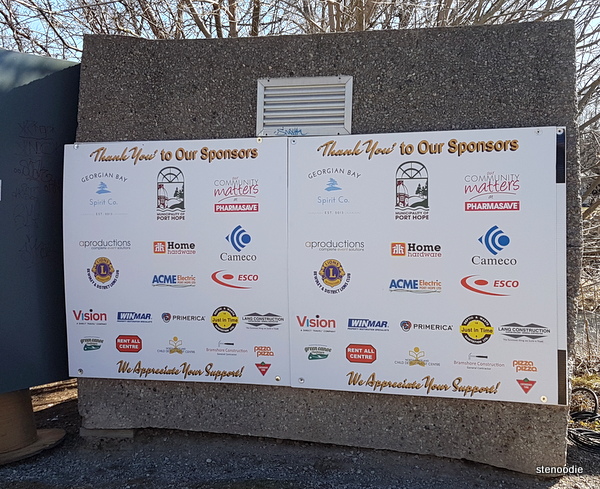 Sponsors for the Float your Fanny 2018 event

If this is something you want to check out for yourself, you can visit their website for more information and on when next year’s race date will be.  It’s family friendly!  Don’t forget to bring your own water gun so you can hose down the participants too! 😛

FTC Disclaimer:  Although the Municipality of Port Hope reached out and invited me to the event, the opinions expressed here represent my own and not those of the organization or businesses.

4 Responses to The Annual Float Your Fanny Down the Ganny in Port Hope, Ontario