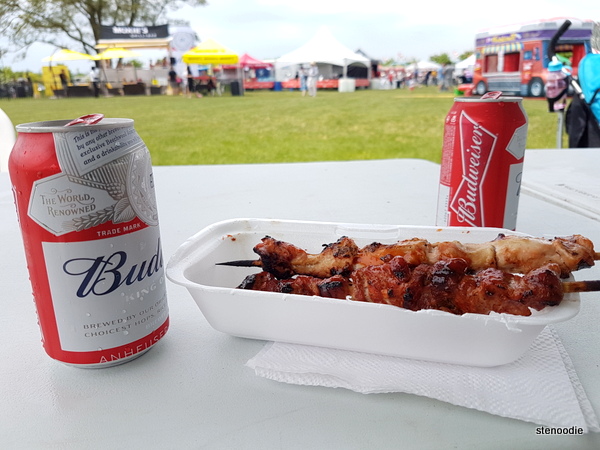 June 9, 2018:  This was my first time attending Foodalicious Food Festival!  (This was their second annual event.)  It’s a food event held outdoors of mostly all food trucks with lots of family friendly games and stalls at Downsview Park.  It’s the perfect outdoor summer food festival for families to bring their kids to since the space is so large and spacious.  There was plenty of room for kids to run around and so many activities for them to play in while the adults can engage in food and (adult) drinks and those without kids won’t be bothered by the little ones running into their paths.

There was onsite parking there but we opted to park at the Farmer’s market/shopping complex close to the actual Downsview Park and walked over to it.  The entrance fee in 2018 was free for kids and $8 per adult (I noticed online somewhere that it was only $5 in 2017 — hello inflation). 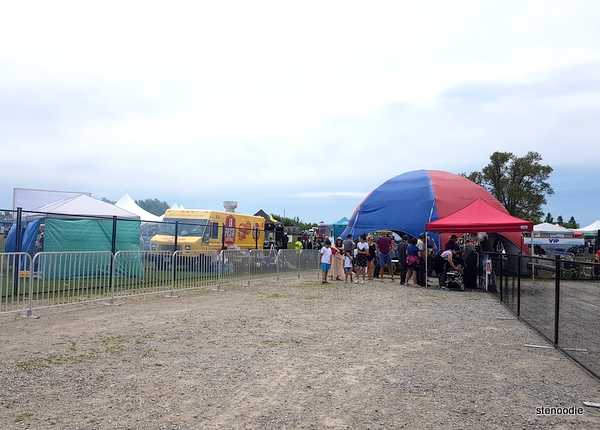 No line-up when we arrived 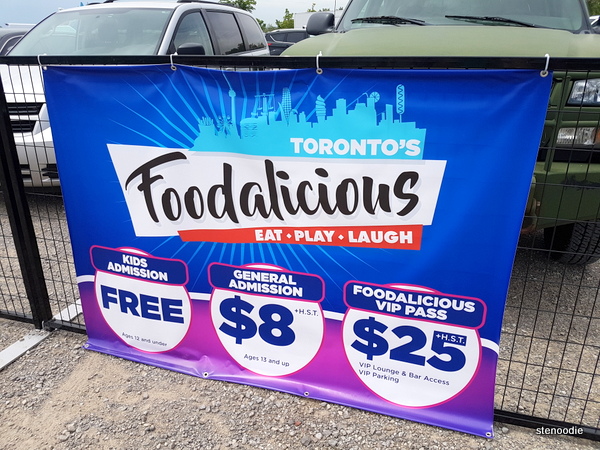 Once inside, I was impressed with all the booths and food trucks.  There were a lot of household product booths as well.  Heading towards the food trucks, I had my eyes peeled for something meaty as I was hungry and wanted some protein.  As we arrived a little after 1 p.m., the party was just getting started. 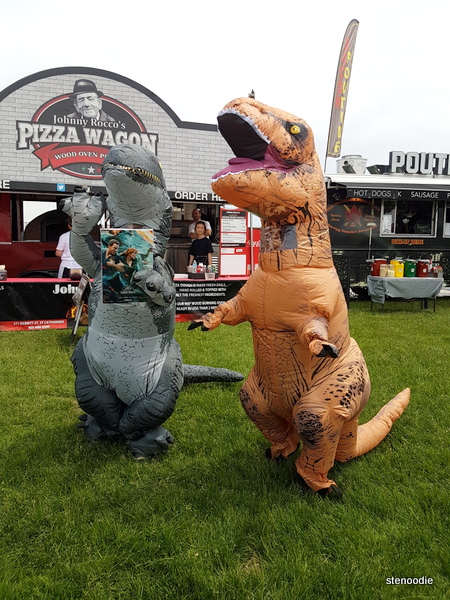 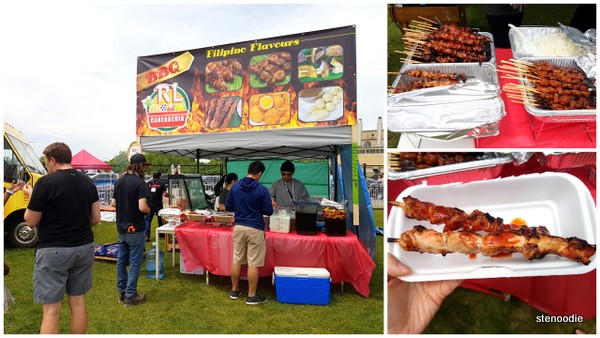 We each grabbed a beer from the drinks stall too before settling down into one of the tables under the tents to feast.  It was such a nice summer day to be outdoors at a food event like this.  We could have spent the whole day here if we wanted to.

I liked the chicken skewers and they weren’t rough or hard to chew through at all. 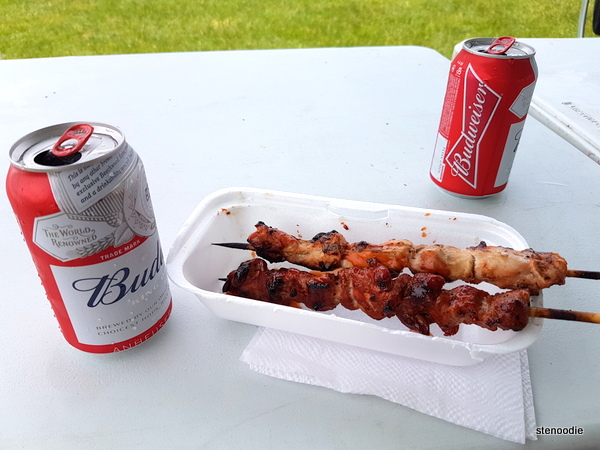 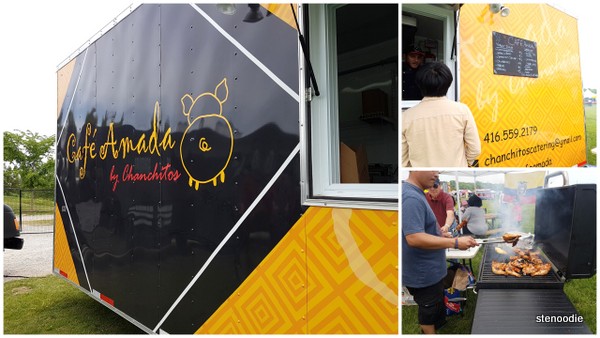 Our second stop was to a food truck called Cafe Amada By Chanchitos that served Latin cuisine.  There was a staff member grilling chicken on the grill and it smelled amazing.  We ordered the BBQ Chicken main (served with rice and salad) and also the Chimichurri Shrimp.  We watched the guy grill the chicken as I anticipated our order.  The man who collected my money from the food truck window must have made an error because instead of collecting $17, he only asked for $13 (as far as I can remember). 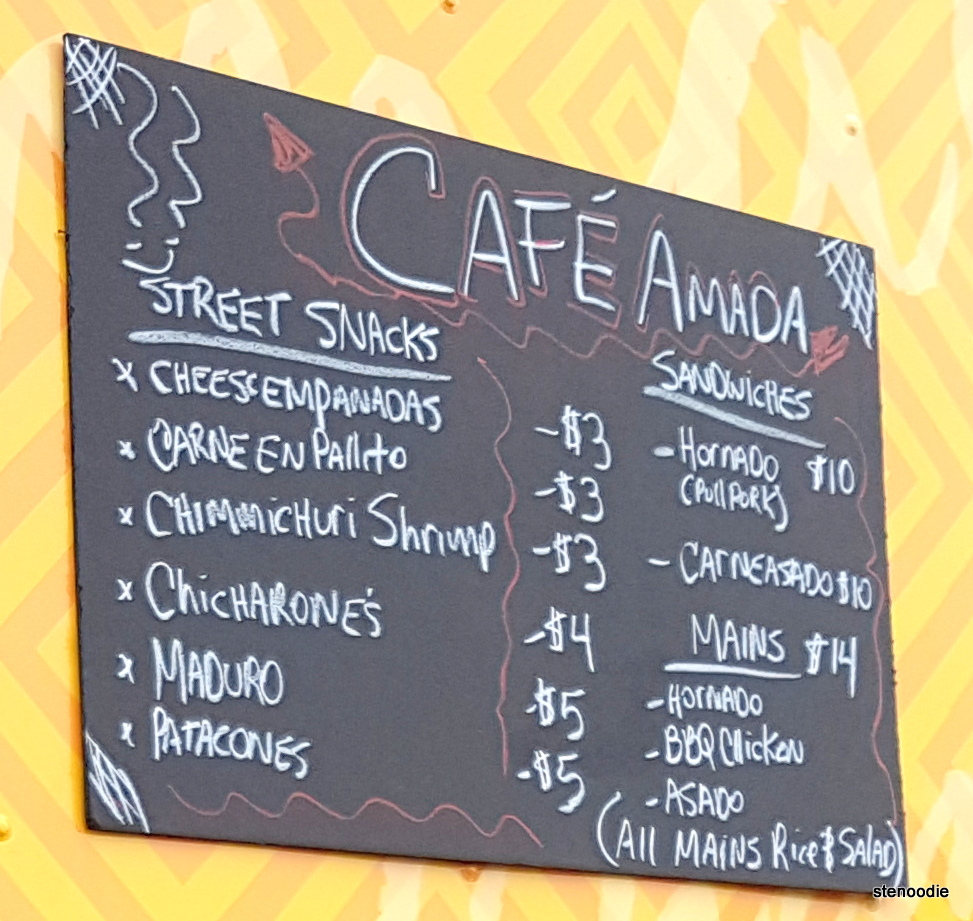 We sat down again under one of the tents to enjoy our food.  The Chimichurri Shrimp was actually just grilled shrimp on a stick with the Chimichurri sauce, but the shrimp was actually quite fresh and firm.  The BBQ Chicken was too charred on the outside — why is it that barbecue chicken always gets so burnt and black?  But luckily underneath the charred skin, it was still tasty and moist.  Instead of rice, we got plantains instead (they must have not had the rice ready yet). 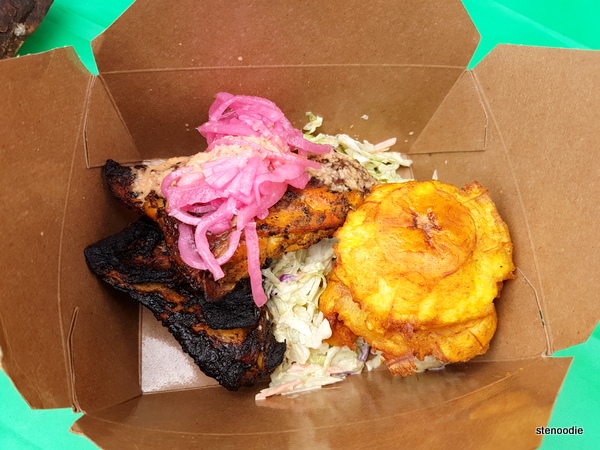 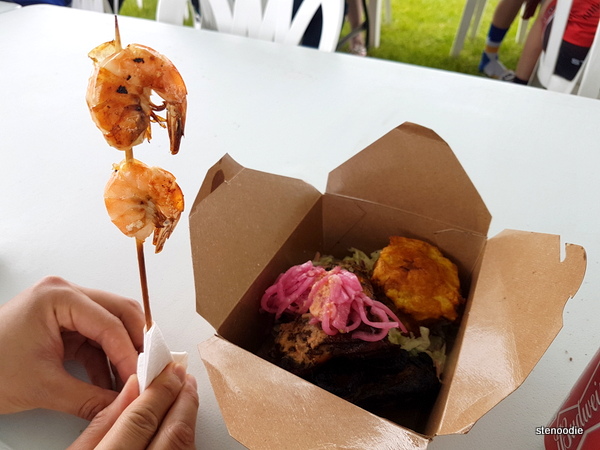 After this, we walked around and looked at the other food trucks to see what else was available for eating.  I liked the variety of cuisines that were at Foodalicious. 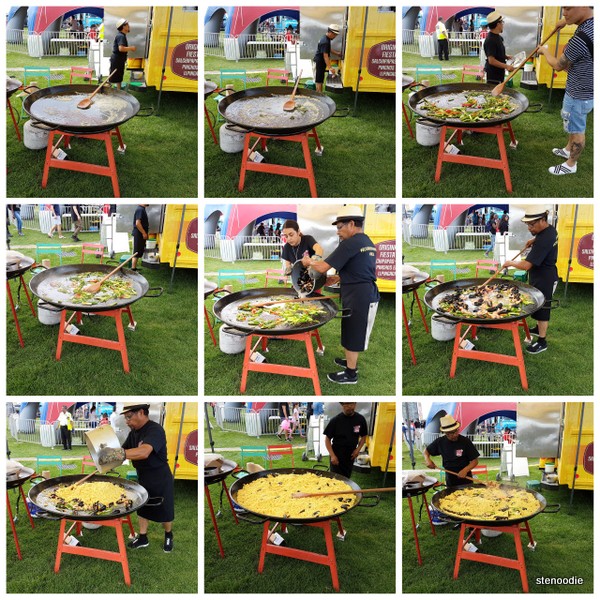 We ended up watching the staff from the La Fiesta food truck (serving Ecuadorian cuisine) prepare a brand new batch of seafood paella outdoors on their mega large pan.  It turns out that this food truck is well-known for preparing their seafood paellas outdoors.  We watched with glee from start to finish.  From the man clearing off the last batch of old grains to seeing the oil splash on the pan, seeing the fresh herbs, green onions and peppers, mussels and shrimp, and lastly the copious amounts of already cooked rice until the entire pan was covered to the first couple of boxes being ordered and scooped into a box for the purchasing customers. 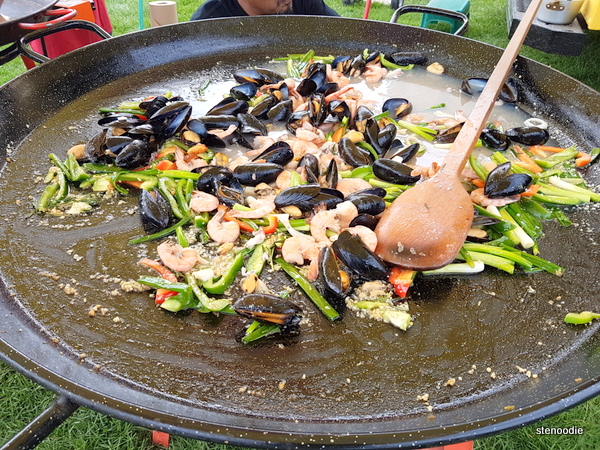 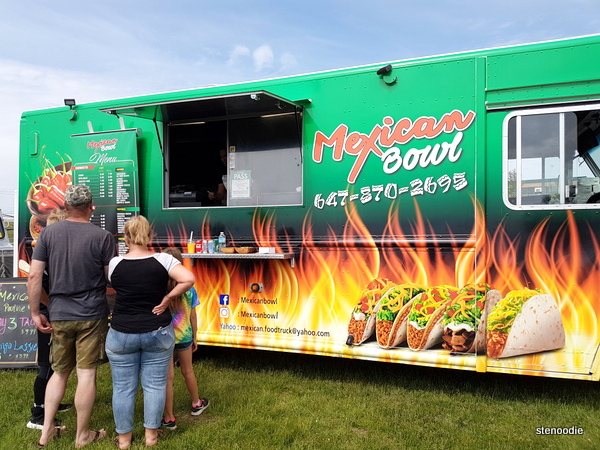 After this eventful live cooking demo, we headed to a food truck called Mexican Bowl for some tacos!  It was a great deal of $9.99 for any three tacos.  We chose the Smoke Trout, Chorizo, and Ground Lamb tacos.

Mmm, these were amazing tacos!  I’m not a huge fan of tacos or maybe I just haven’t had really amazing ones yet.  I loved the thin yet cripsy and non-soggy taco shells.  The ingredients in each taco were so substantial too.  Each one was so delicious! 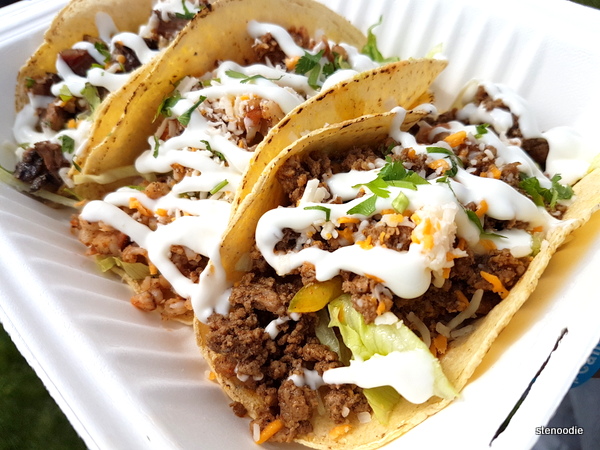 After this, we checked out some of the rock climbing, jumping castles, midway rides, and other kids’ games that were on site. 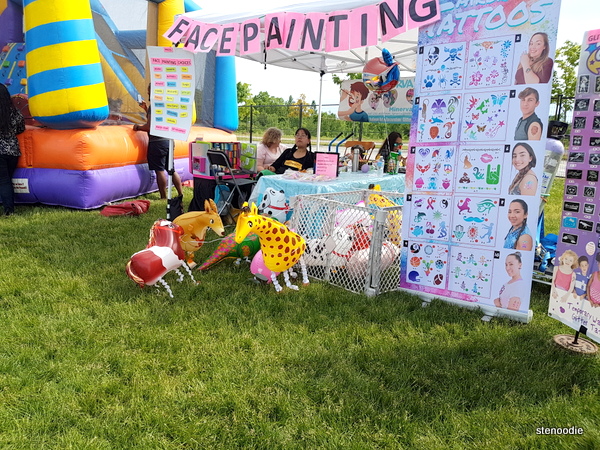 We exited the food festival around 4:30 (there was a line-up entering the festival by this point) and headed over to check out the shopping complex and farmer’s market where I got a fresh, juicy, and thirst-quenching coconut juice to drink.  It was so good! 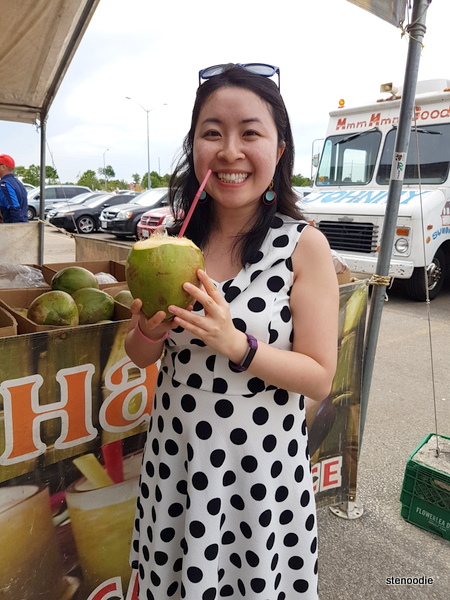 I really liked the wide variety of food trucks at Foodalicious and how big the venue was (I particularly liked how everything was laid out in such a reasonable way — the food trucks encircled the area with the seating areas in the middle and then all the games were on the other side of the park).  They also had live music, plenty of seating under tents, and large open spaces to walk around.  The porta-potties were clean too.  Good job, organizers of Foodalicious! 😀