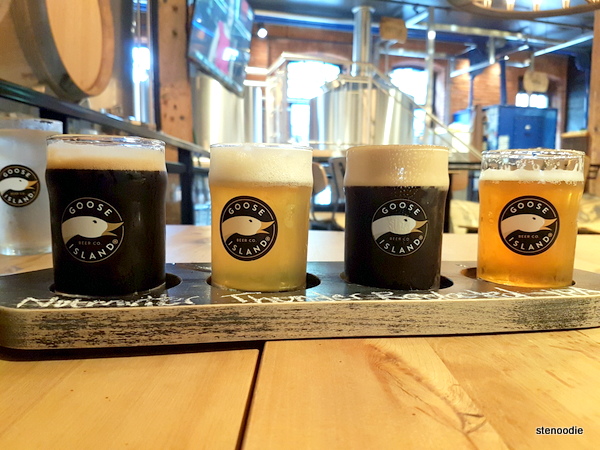 Goose Island Brewhouse Toronto located at 70 The Esplanade in Toronto

July 14, 2018:  After the media walking tour for the Feast of St. Lawrence, we were in search of a restaurant for dinner.  We came across Goose Island Brewhouse which was also in the Old Town Toronto area.  They had a nice patio on this beautiful summer day and we headed inside to take a look at their menu before deciding whether we wanted to dine in or not.  Stepping in and glancing through their menu, I also noticed how nice the interior was.  I could already spot at least one item I could try on their menu, so we decided to dine here.

I definitely liked the cozy interior of the restaurant.  There were a lot of brew kettles and tanks and I could see the line of different types of Goose Island beers on tap at the counter. 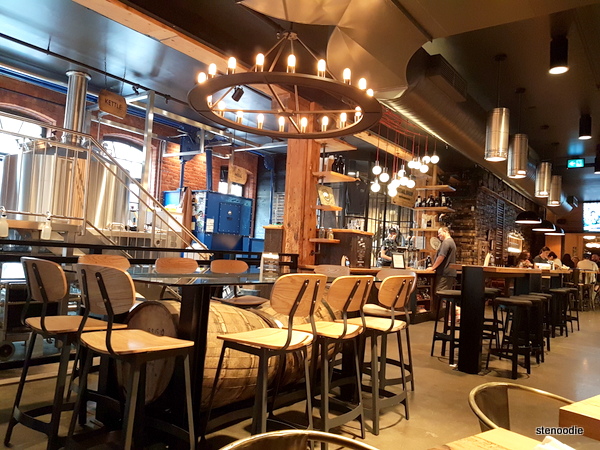 I loved it here 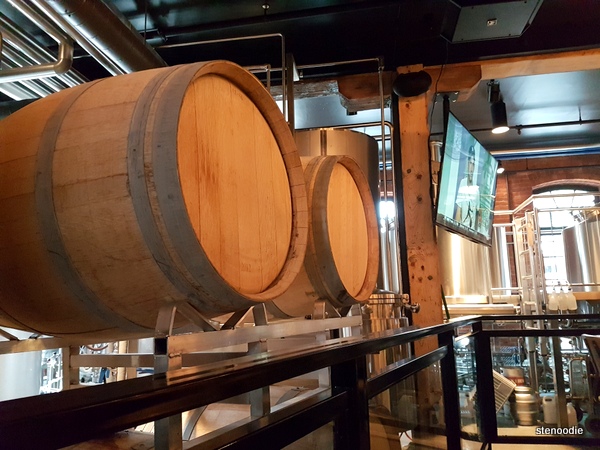 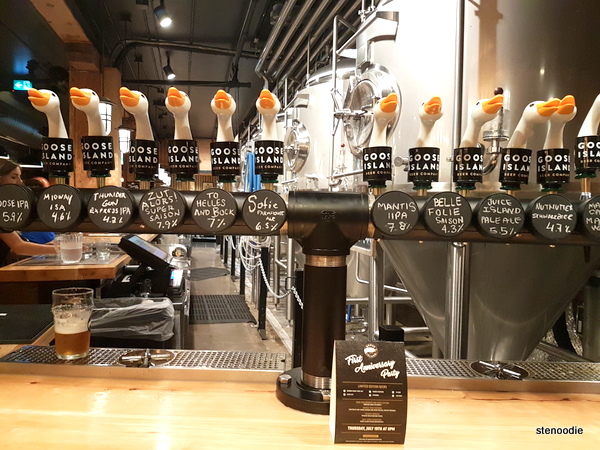 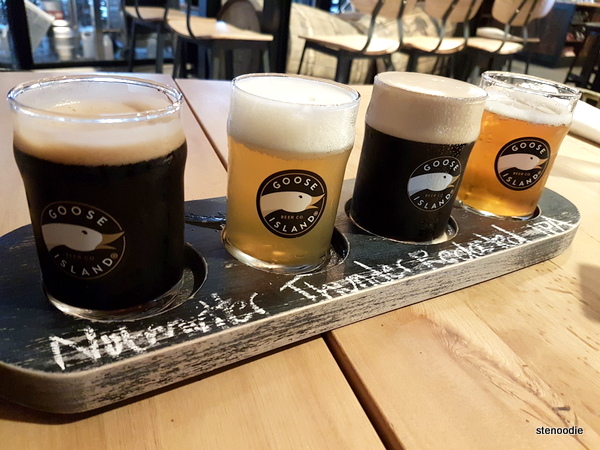 I was so impressed with this meal!  First of all, we had a flight of beer (I love flights).  We were able to try the original Goose Island beer plus three other reincarnations!  It was so great.

We had the Nutmutter, Thunder Gun, Redacted, and the Goose Island IPA.  I liked how each beer was labelled in chalk on the board so that we could see which beers were which.  It’s little things like this that make the dining experience even better. 🙂

Secondly, they had a sharing board option where you could customize your board with any of their 25 culinary creations!  They priced them at three, five, seven, nine on a board, or a la carte.  We decided to choose three items to go on our sharing board.  We chose the Crispy Brussels Sprout Leaves, Triple Cream Brie, and the Smoked Kielbasa sausage. 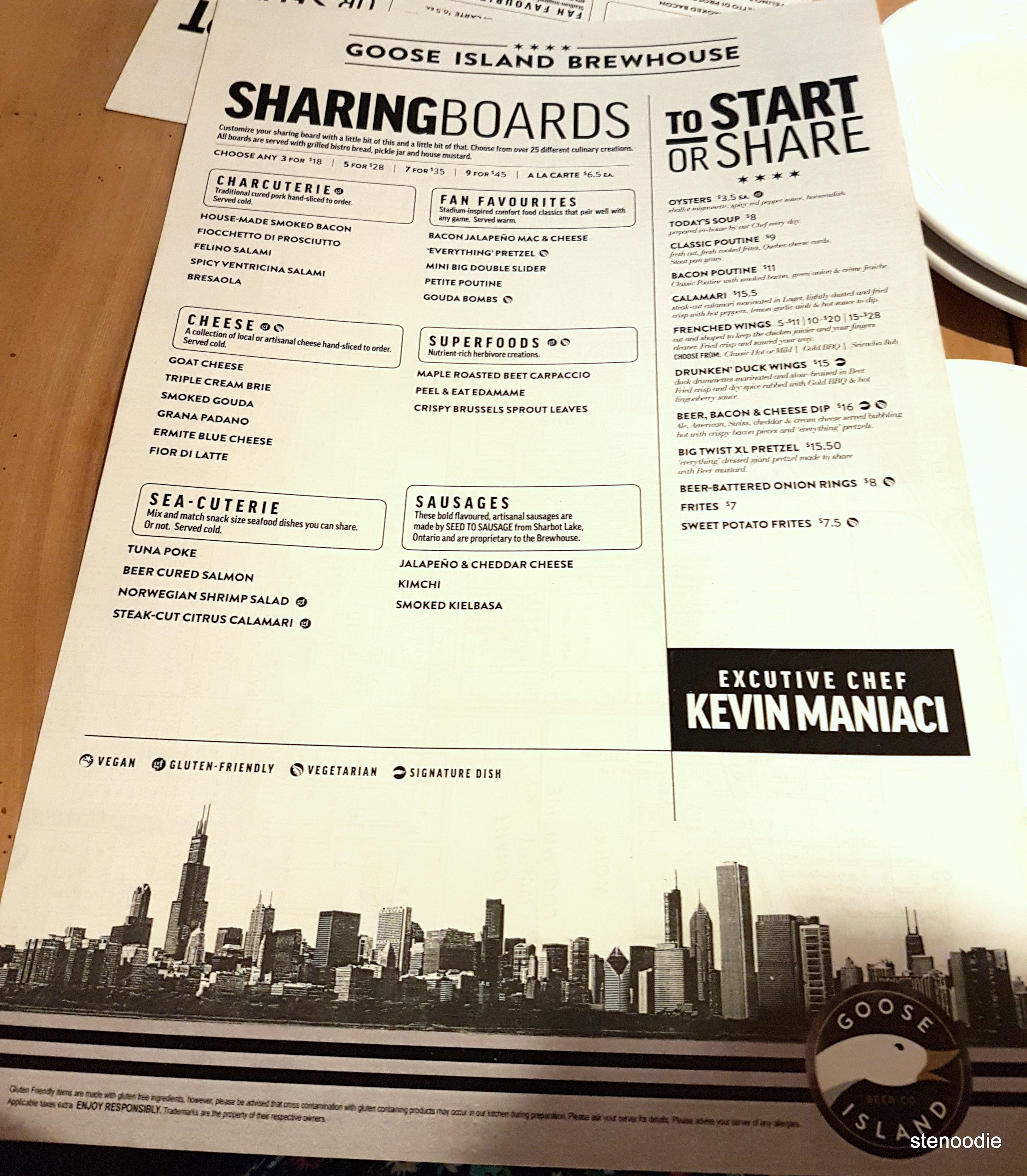 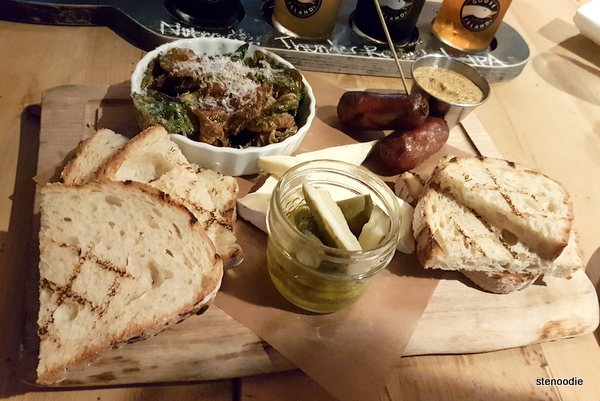 Our three choices were fantastic.  The Crispy Brussels Sprout Leaves were really good with lots of parmesan cheese on it.  The Triple Cream Brie was great as well as the Smoked Kielbasa sausage.  The bread that came with the sharing board was so good too!  There was also a small tub of pickles.

I appreciated that our server came to check up on us often.  I especially appreciated that when our mains arrived before we were finished our sharing board, she apologized for the quick arrival of the mains and asked us if we wanted to put the dishes under the heating lamp to keep them warm first.  I declined her considerate suggestion, but it was definitely appreciated!  (I don’t think I’ve ever been to a restaurant where the server has suggested that before.) 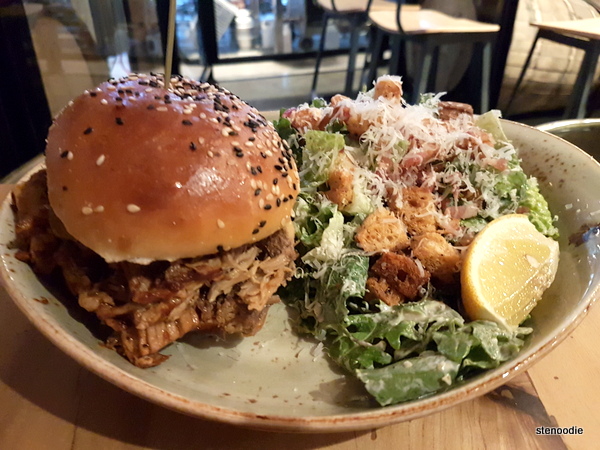 I ordered the Pig Roast Sandwich.  Its description sucked me in and I was very curious about a “brined and basted whole roasted suckling pig, crackling, seasonal fruit slaw, jalapeno and dijonnaise on a toasted black and white sesame seed bun”.  When it arrived, I was so impressed with its size!  The portion was huge!

At first, I actually thought that the wrong order was given to us because I didn’t think that the “crackling” part was present.  However, after I asked the server about this, she took the order back to ask the kitchen about it and reassured us that it was the correct order.  I liked the sandwich regardless.  There was actually so much roasted pork in between the buns.  It was a very impressive portion. 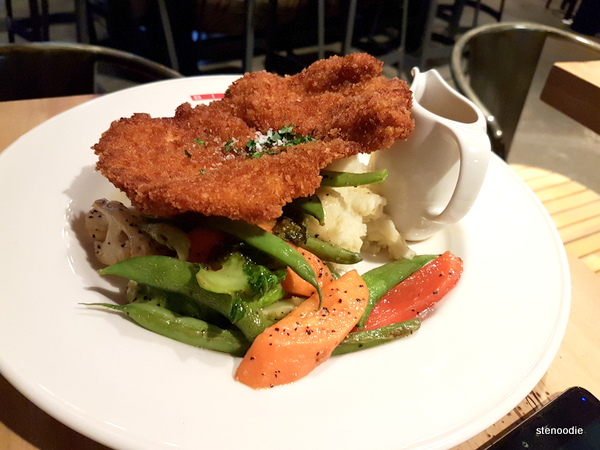 Ken ordered the Chicken Schnitzel which was served with Yukon gold mashed and mixed vegetables with mushroom, tomato, and onion gravy.  It was also a really nicely plated dish.  In fact, Goose Island seems to share its dining space and menu with Bier Market as the plate that this dish arrived on had the Bier Market logo on it.

This Chicken Schnitzel was also very impressive as the chicken cutlet was nicely crispy on the outside but not dry at all!  It was really good!  I also liked the fresh and moist vegetables that came with it. 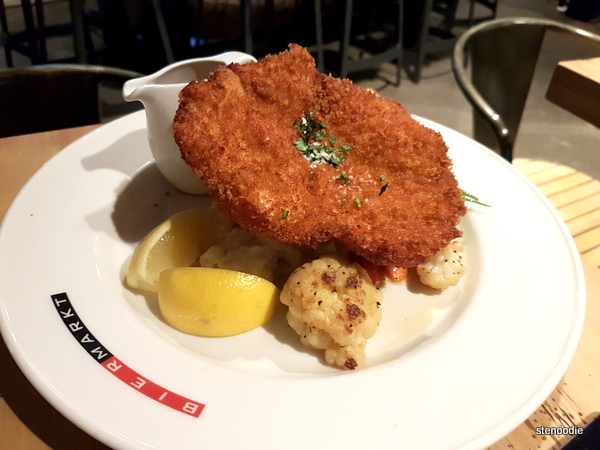 You can see the crispiness

As you can tell, we had a really good time dining here.  The food choices were exceptional — that sharing board is genius — the portions were phenomenal and the tastes were good, the service was splendid, and the vibe of the restaurant was so nice to chill in for some beers.  I would totally return to the Goose Island Brewhouse for another meal! 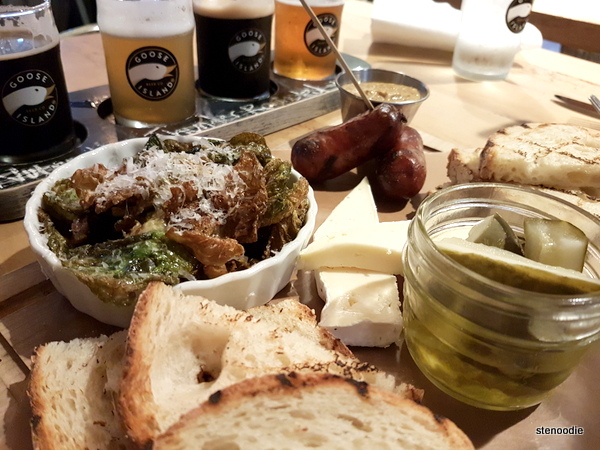 This was an amazing feast! 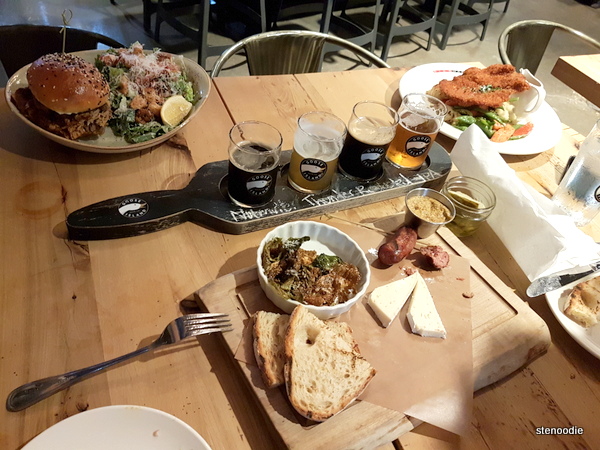 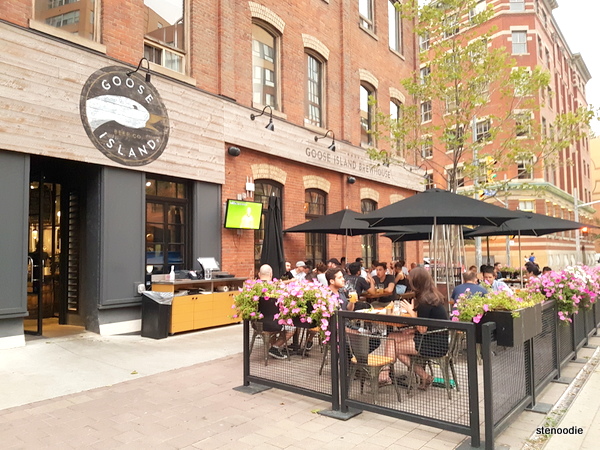