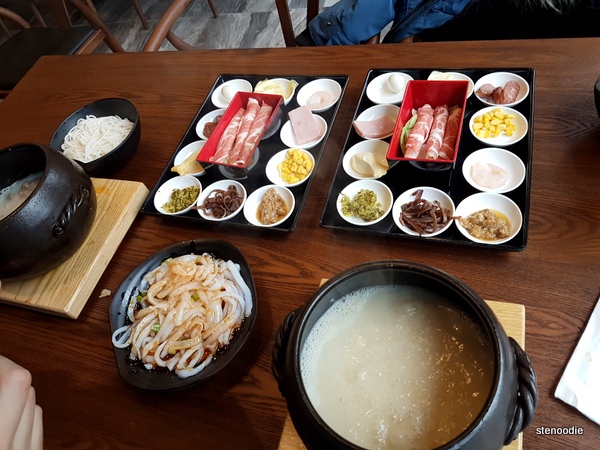 February 24, 2019:   There are so many Chinese noodle restaurants in the GTA now!  I can’t keep up with them (nor do I want to).  It just so happened that we were this area of North York and looking for lunch when we dined at Yunshang Rice Noodle (云尚过桥米线).   (“Yunshang” translates to “above the clouds”.)  Apparently, this was a brand new restaurant (they still had so many of the Chinese flower signs all around the front door) and is a new outpost of the Yunshang franchise.  I didn’t know that Yunshang Rice Noodle had so many branches across Toronto already (they actually have restaurants all across Toronto, Montreal, Vancouver, and New York)!

The restaurant features Yunnan style “cross bridge noodles”, the noodles and side dishes that you plop into a steaming bowl of hot soup which you then mix together and eat.  There are dozens of restaurants like this in the GTA; there is so much competition! 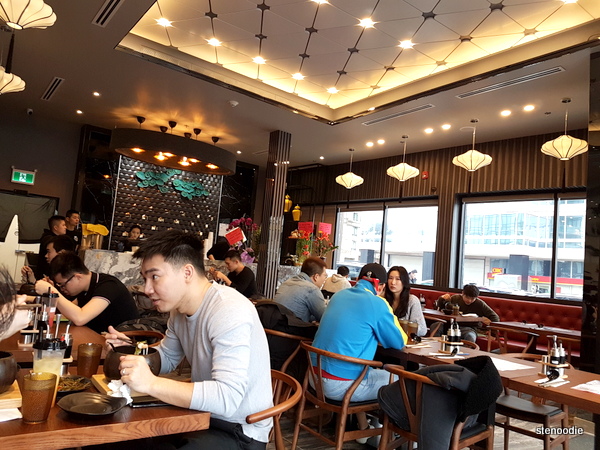 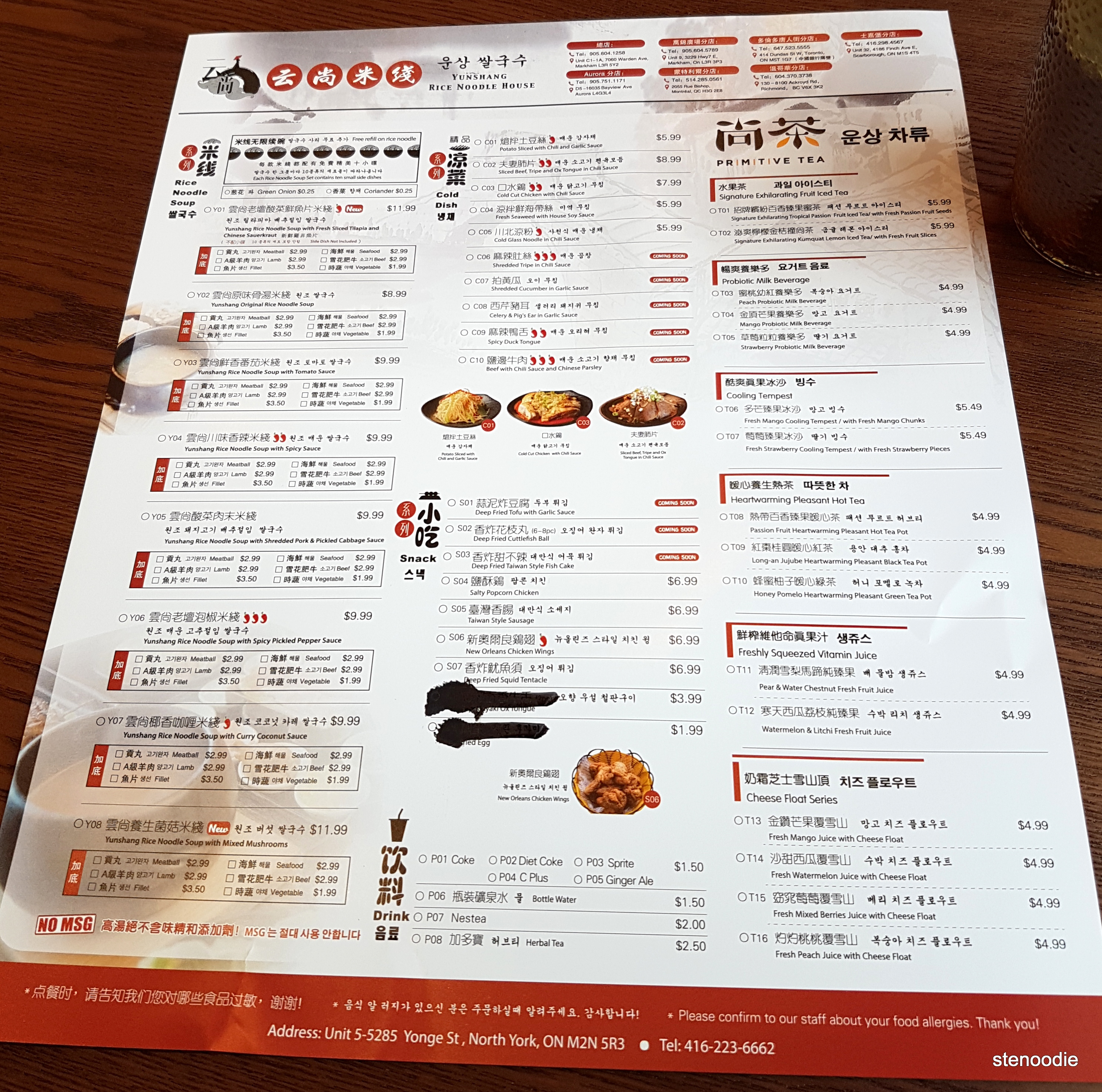 We both chose the Yunshang Original Rice Noodle Soup, which was a great deal at $8.99 per bowl.  You could add additional ingredients to the bowl, which Ken did.  He added the lamb option.  We chose two savory snacks to share too:  Cold Glass Noodles in Chili Sauce and Salty Popcorn Chicken.

(I just noticed while editing this blog post that their menu not only has the items in English and Chinese but also in Korean!  So cool.  It must be because North York has a heavy presence of Korean speakers.) 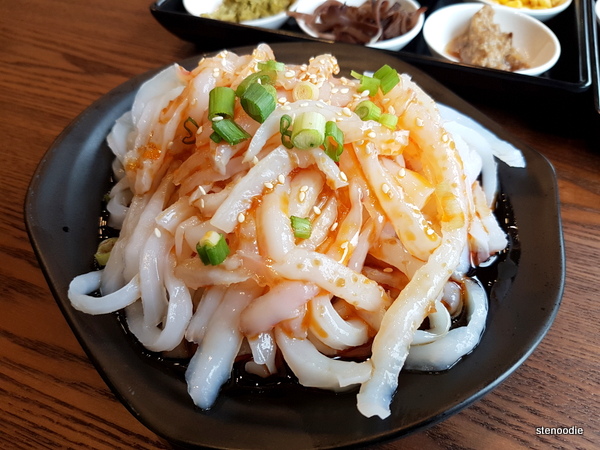 The Cold Glass Noodles in Chili Sauce were quite good!  The portion was a good size for sharing.  The glass noodles were thick and slippery and very silky.  You barely needed to chew them since they were so slippery and light.  The chili oil on it wasn’t too spicy.  It was a great appetizer to open up the palate.

The Salty Popcorn Chicken was a very large portion and came with a side of red semi-spicy sauce.  The popcorn chicken here was not like the Taiwanese style ones but still crispy and tasted fine.  Usually, popcorn chicken tastes fine by itself and doesn’t need the accompanying sauce but for this one, I actually found that the chicken tasted better with the red sauce. 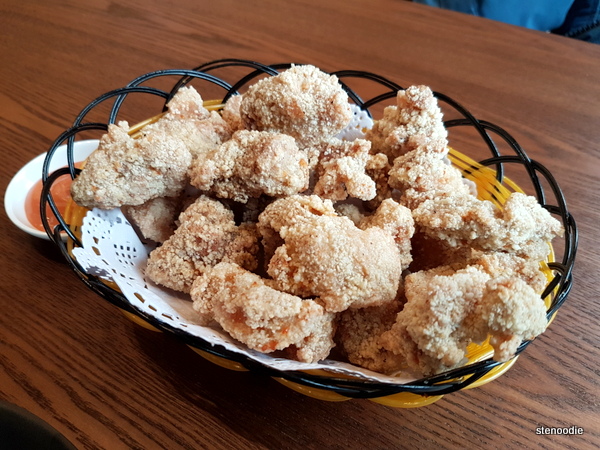 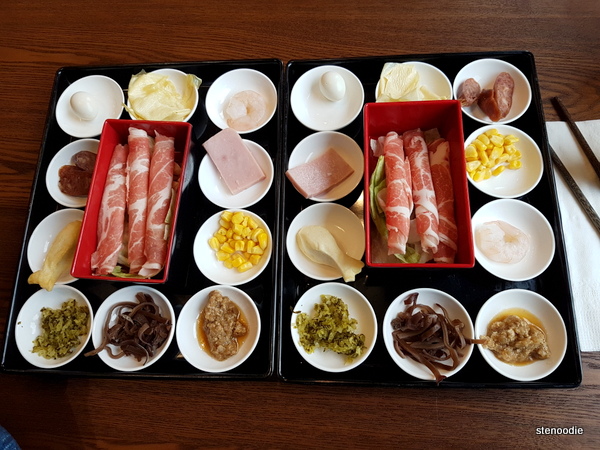 Ten side dishes each for the Yunshang Original Rice Noodle Soup

When the server then brought the bowl of steaming hot soup over to your table, you are supposed to put all of the raw side dishes into the bowl and then followed by the bowl of already-cooked rice noodles.  You want to make sure that the ingredients in the side dishes are added first to the hot bowl so they become thoroughly cooked.  I learned this through an unpleasant exchanged during a visit to A! Xiang —  the server was so rude to me about the order of ingredients to put into the bowl.

I noticed a customer at the table next to us who put in the noodles first and one of the servers saw this and gently went over to her to inform her to put the raw side dishes in first.  That’s the way it should be done. 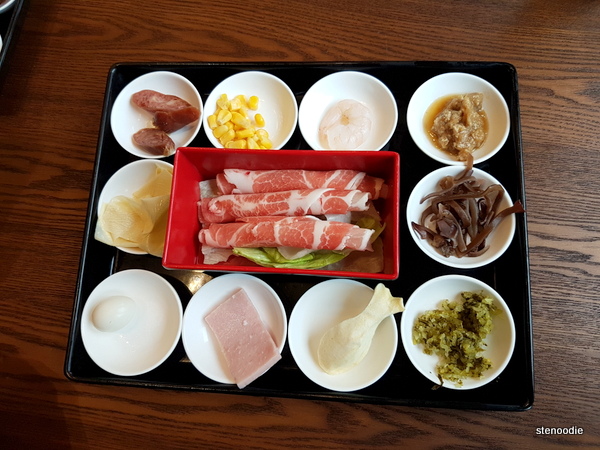 I really liked the broth here.  The rice noodles were firm yet not too al dente.  It was a pretty good meal! 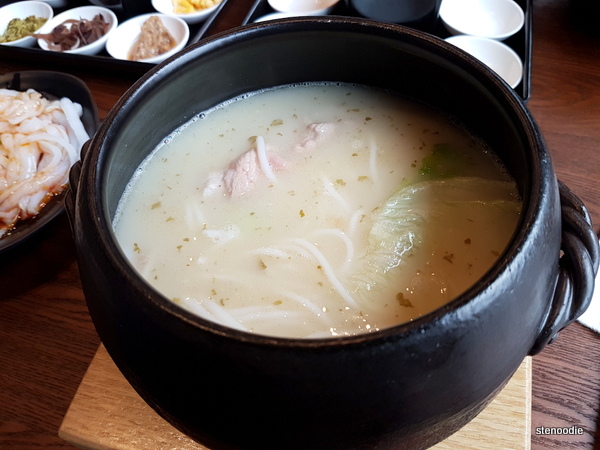 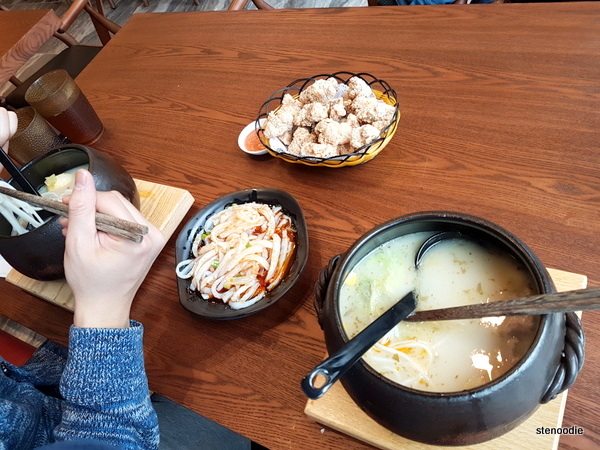 I noticed how the servers were particularly smiley and kind to all of the customers.  Perhaps it is because they want to make an extra good impression considering they are still a new restaurant?  They were very cheerful and friendly when compared to most other Chinese noodle restaurants. 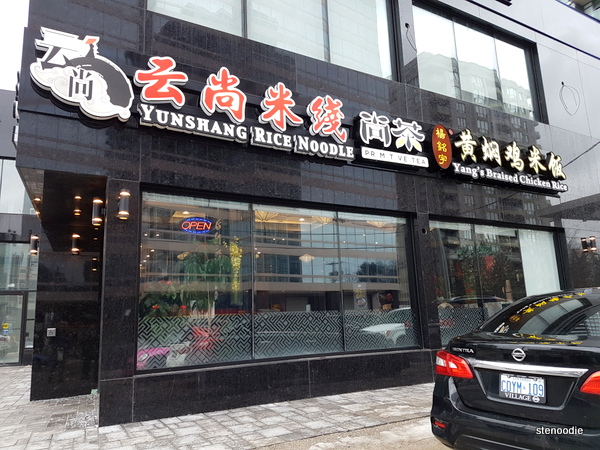