Cross Bridge Noodles at A! Xiang 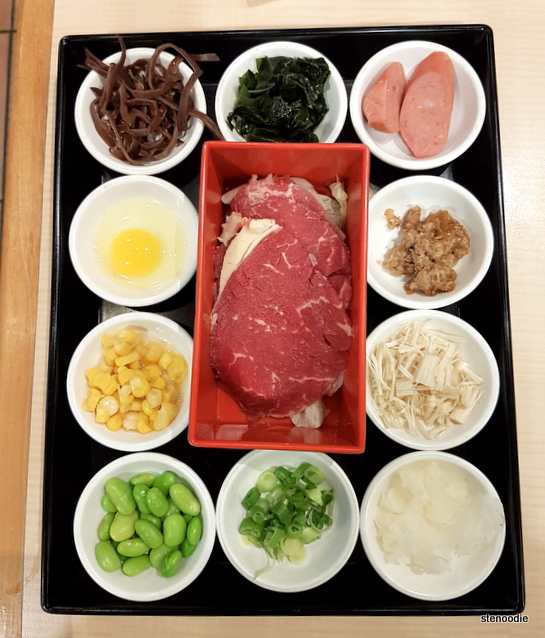 My dining experience at A! Xiang was a terrible, terrible one from start to finish.

A! Xiang is a newly opened restaurant in Markham located at the Commerce Gate Plaza at Highway 7 near Commerce Valley Drive West.  A! Xiang takes over the spot where Jyuban Ramen House used to be (that ramen house was also terrible in their service).  A! Xiang serves Yunnan noodles known as “cross bridge noodles” where an assortment of raw ingredients and rice noodles arrive to the table and then are put straight into a steaming bowl of broth to be “cooked” at the table.  I had had Yunnan rice noodles previously at Yunnan Rice Noodles and also at TamJai SamGor in Hong Kong. 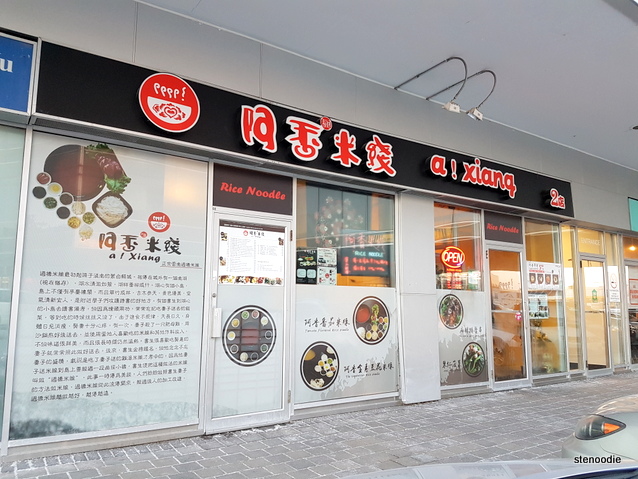 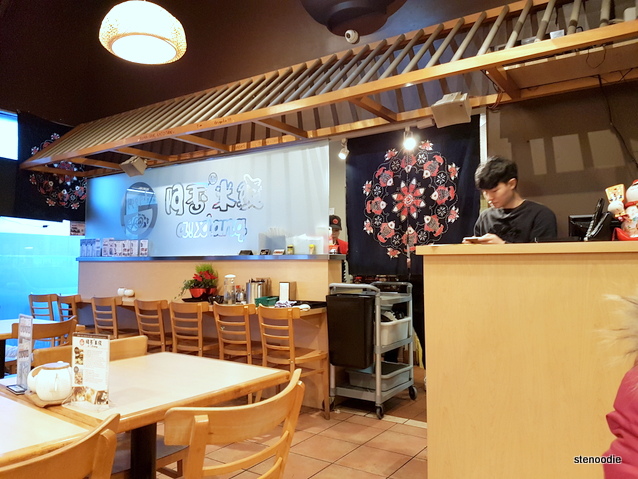 They retained the same interior design as the previous ramen business

My mom and I were the only customers to walk in at 4:40 p.m. on a Sunday.  Right away, I recognized the old interior space of where the old ramen house used to be.  The new owners for A! Xiang had done nothing to freshen up the unit for its new business.  On the mantle of the Japanese style roof, I still saw the graffiti drawings characteristic of the old ramen house.

There were two young guys working as servers during our visit.  One of them was sitting at another table using his smartphone the entire visit and the other one served us water and the menu.  Both of them were dressed in street clothes.  One wore a black cap with white sneakers.  To me, it didn’t look like they were dressed appropriately for their role as servers in a restaurant at all. 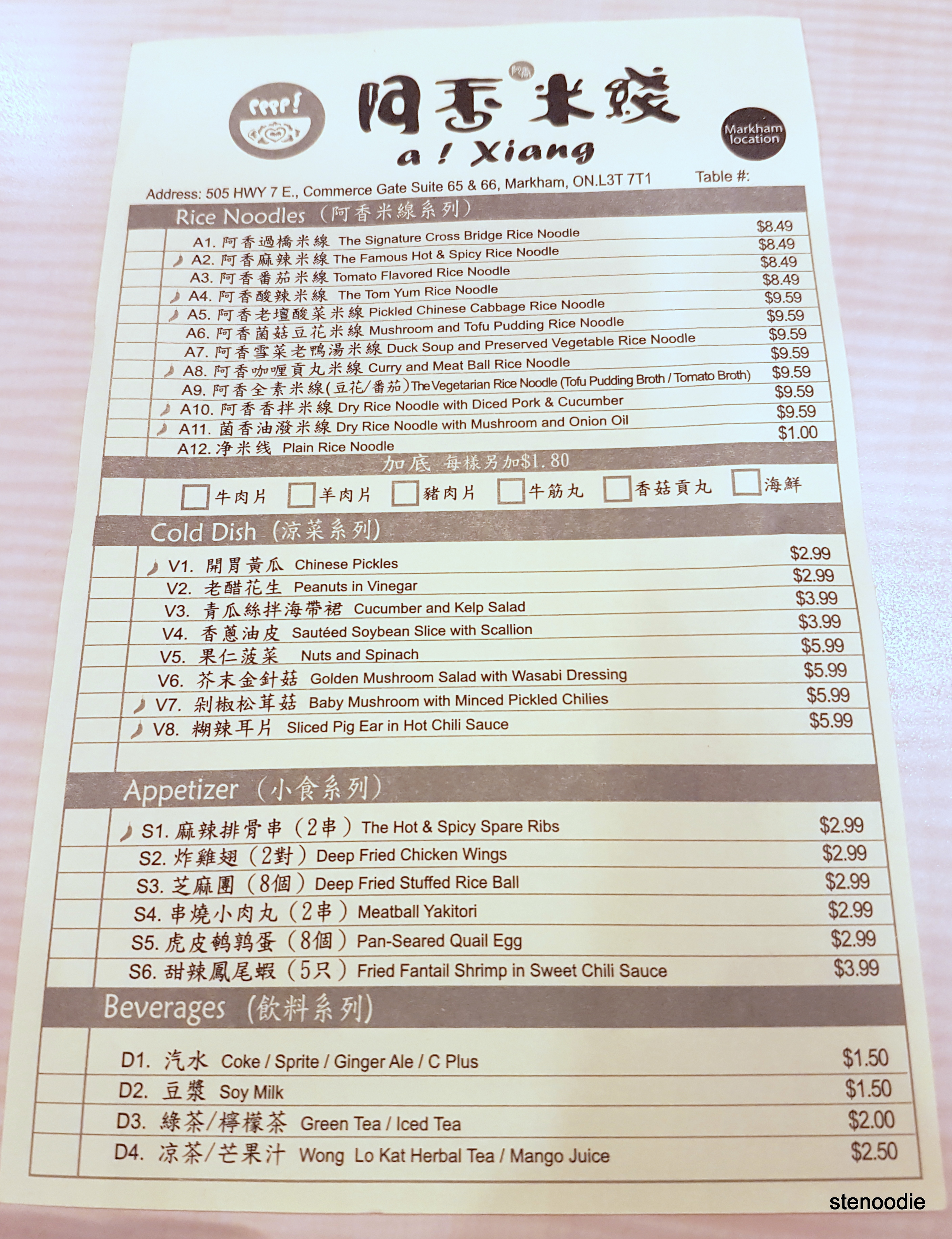 The menu was very simple with a few items.  The first item on the menu was “The Signature Cross Bridge Rice Noodle”.  The rest of the items were variations of rice noodles with toppings like “tomato”, “hot and spicy”, “tom yum”, “mushroom and tofu”, and others.

Wondering what ingredients were included with The Signature Cross Bridge Rice Noodle, we waved down the server to inquire.  I was appalled when the guy couldn’t answer our question.  He said, “There’s meat…”.  Uh, okay, but what else?!  He answered, “There’s sausage, seaweed…” and kind of trailed off.  I thought that was completely unprofessional and inappropriate.  How could a server who was working in a restaurant not know or answer a customer’s question about what was in the dish?! >=(

We didn’t think much of it at the time but ordered one order of the Signature Cross Bridge Rice Noodle to start.  Since we couldn’t get a straight answer about what was in the Signature dish, we ordered that first so we could see what was in it before ordering a second item. 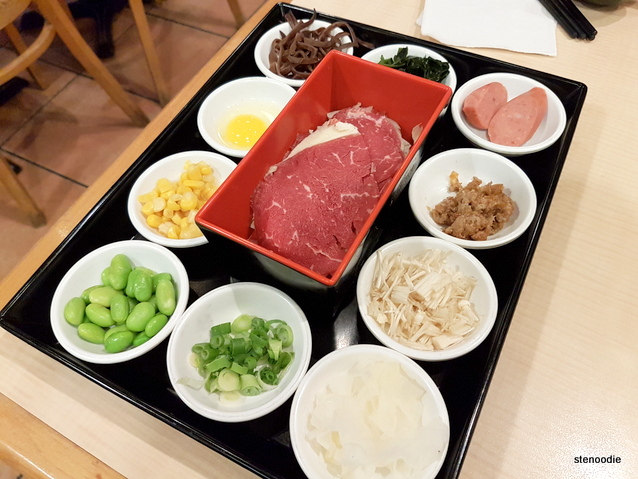 Very quickly, the plate of raw ingredients for my Signature dish arrived.  There were 11 ingredients whereby each one was placed into a little condiment dish (with the raw beef in a bigger plate in the middle).  From our view, we could tell that the ingredients included were (from left to right): black fungus, seaweed, sausage, quail egg, minced meat, corn, enoki mushrooms, green beans, green onions, and white fungus.  The portions of each ingredient were very, very small.  In particular, the enoki mushrooms were chopped up so finely that each piece was so minuscule.

Anyway, once we saw what the ingredients in this Signature dish contained, my mom placed an order of the Duck Soup and Preserved Vegetable Rice Noodle for herself. 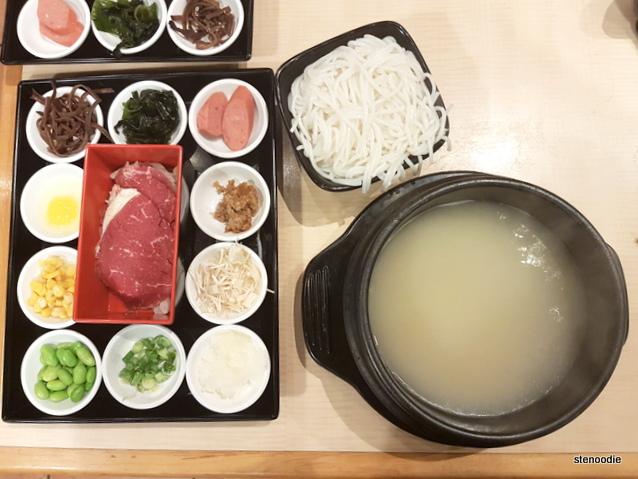 Soon, the rice noodles and the bowl of steaming soup came out.  Unfortunately — and this was highly inappropriate — the server literally RAN out of the kitchen with the rice noodles and soup in each hand to put on my table.  Because he was so out of control, many strands of the rice noodles actually fell on the floor and all over my table and on my plate of ingredients in his haste.  WTF.  He didn’t even realize he had dropped the noodles until I pointed it out:  “Uh, you dropped all the noodles.”  He didn’t even apologize — he simply mumbled something about the noodles which was clearly an excuse and then just busied himself with cleaning up the noodles on the floor.  I was shaking my head in disbelief.  This was so unprofessional!  (Also, this was dangerous.  What if instead of dropping the noodles, he had swerved and the hot soup had flung in my face?!  It was seriously unacceptable.) 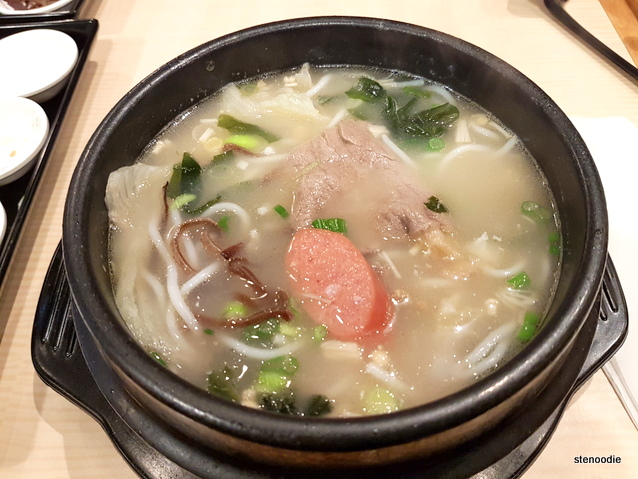 The soup was kept hot in a Korean style stone bowl

Anyway, after a quick photo, I knew I needed to put the ingredients into the steaming bowl of soup right away for everything to be cooked.  I started to put the noodles into the bowl first but the server right away told me that I had to put the raw ingredients first and the noodles last.  When I tried to put in the black fungus first, he said that I had to put in the egg first.  Uh, why didn’t you specify that then?!  I felt like I was being treated as a child because I was chastised for not knowing what to put into my soup first.  (At the previous two Yunnan rice noodles places I had been to, the server was the one who assisted in the cooking process and I didn’t have to do it myself.)  The server here at A! Xiang should have pointed it out or asked if we knew how to eat Yunnan rice noodles if he was going to so particular about which ingredient I added in first.  (Or they should have a poster up or a card on the table educating their customers on the proper way to eat Yunnan noodles.)  Anyway, I was not enjoying the dining experience at all at this point.

When my mom’s portion of Duck Soup and Preserved Vegetable Rice Noodle arrived, the raw ingredients were almost identical to the one in my Signature dish.  In replacement of the beef though, she had duck meat and also some preserved vegetables.  When her soup and rice noodles came out, the server walked out properly with the items so nothing was dropped.  (That’s the way a server should serve food!) 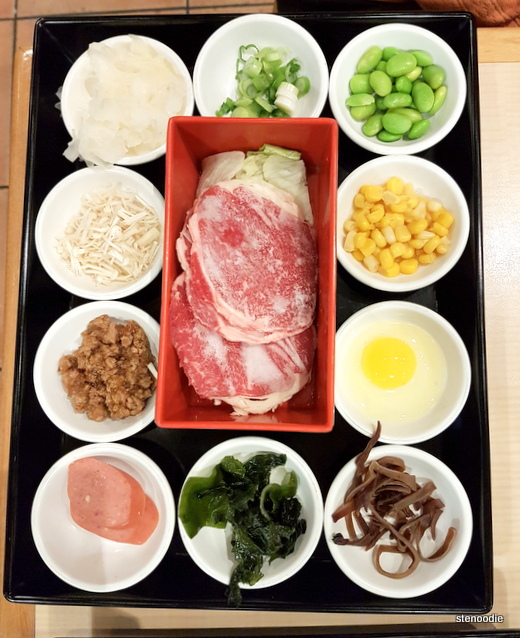 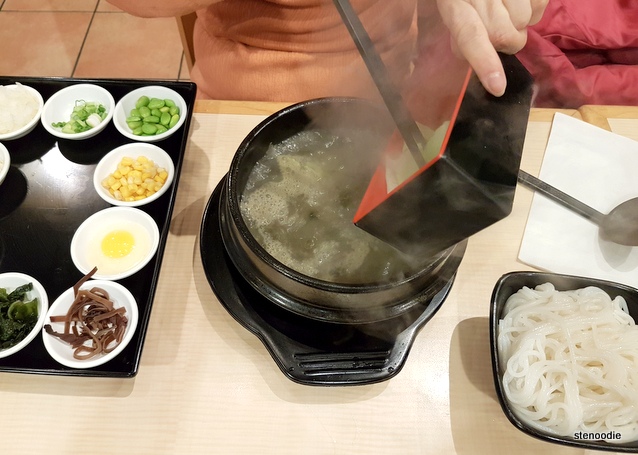 Pouring the ingredients into the steaming hot pot 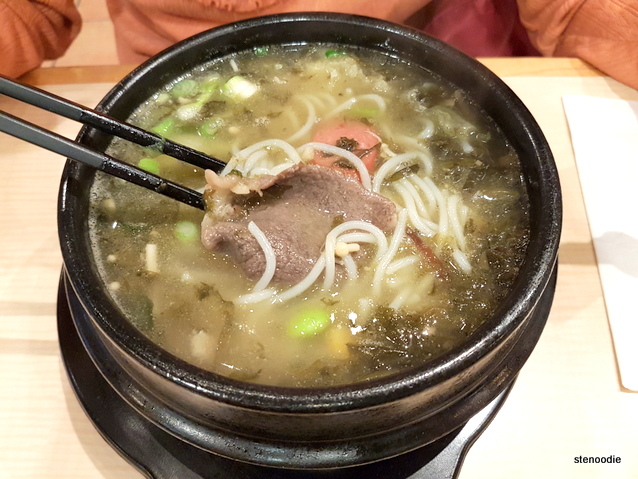 In terms of the food:  The taste of the soup was good; however, it tasted like MSG to me.  (I was thirsty later that night.)  The rice noodles were decent and tasted nice and chewy.  The two beef slices were really rough and not the greatest.  The best part out of all the ingredients was actually the sausages.  Everything else was extremely tiny.  I had mentioned above that the enoki mushrooms had been sliced so thinly that after you placed it into the soup, it nearly disintegrated and it was hard to find.  It was a really disappointing meal and I couldn’t wait to finish eating and leave.

On top of everything that happened, I found the dining experience to be really awkward.  There was no background music.  There was mere silence in the restaurant.  (They had a TV screen that was playing random “funny baby” videos and commercials.  The server had to keep controlling the remote to restart the segment again because the loop would run out.  The videos were so random and didn’t have anything to do with the restaurant.  They did have one segment where they advertised the restaurant and showed people dunking the ingredients into the hot soup.)  Dining out at a restaurant is not just about the food; it is also about the experience.  The server who had served us had moved on from playing with his phone to cleaning chopsticks and wiping spoons at one of the tables in the dining area.  When he was cleaning the chopsticks, he made loud swishing noises.  Also, when he cleared our table of the empty condiments plates, he merely dropped them loudly into the bucket in the kitchen and which was so noisy.  Was that really necessary?

(By the way, the spoons at the restaurant were the ramen ladle types.  Could it be that they simply used the same utensils from the old ramen restaurant?) 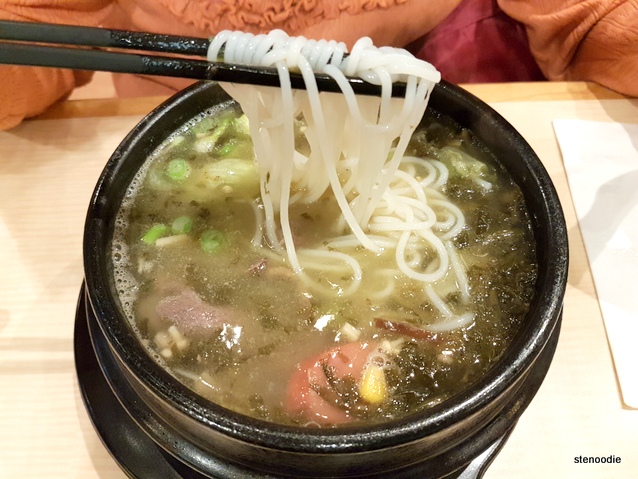 The texture and consistency of the rice noodles were good, thankfully

Two other customers came into the restaurant as we were nearing the end of our meal.  When it came time for one of the customers to mix her ingredients into her steaming bowl of soup, I noticed that the server didn’t alert her at all about the order of ingredients to put in first.  Why did he instruct me on how to put the ingredients and didn’t instruct the other customer at all?  The service was very inconsistent.

Finally, we paid the bill and left after we had finished eating.  I thought that $10 for each of the noodle soups was overpriced based on the fact that the ingredients were so crappy and nonexistent.  The portion of rice noodles was also small; I didn’t feel full after the meal.  (Each additional portion of rice noodles cost $1 if you wanted to add to your bowl.)  There are other cross bridge noodle restaurants in the GTA and I will gladly go to those ones than step foot inside A! Xiang again.  Again, terrible experience.

5 Responses to Cross Bridge Noodles at A! Xiang