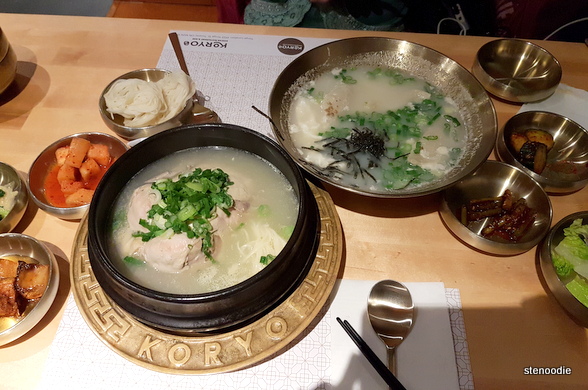 March 19, 2019:  A hungry belly after a day of work called me to Koryo Samgyetang, a Korean restaurant located on Leslie Street south of Steeles Avenue in North York.  I had this restaurant on my to-try list after noticing their high reviews for a while but wasn’t in this area often for it to be convenient to go.  Finally, I got to try this place! 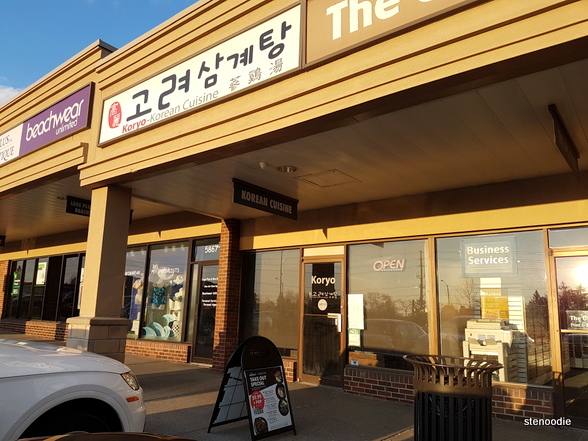 Storefront in the day time 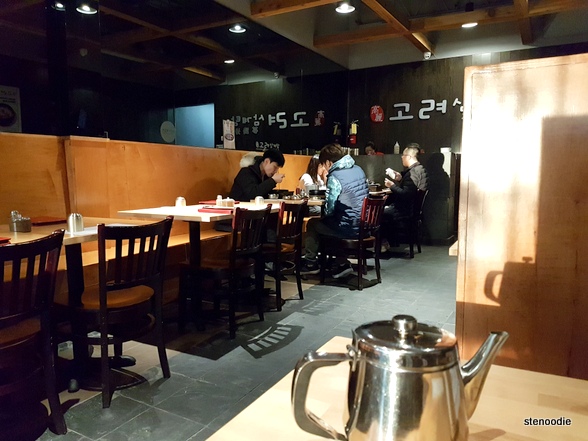 The servers were so warm and friendly.  It was definitely a great place to have dinner and unwind after a work day.

I liked how sophisticated and rich the menus appeared to be.  All of their utensils and bowls that evening were spotless and beautiful as well. 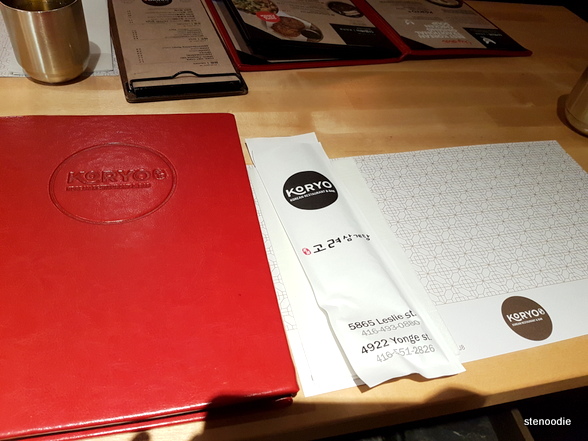 Menu and utensils packaged in paper 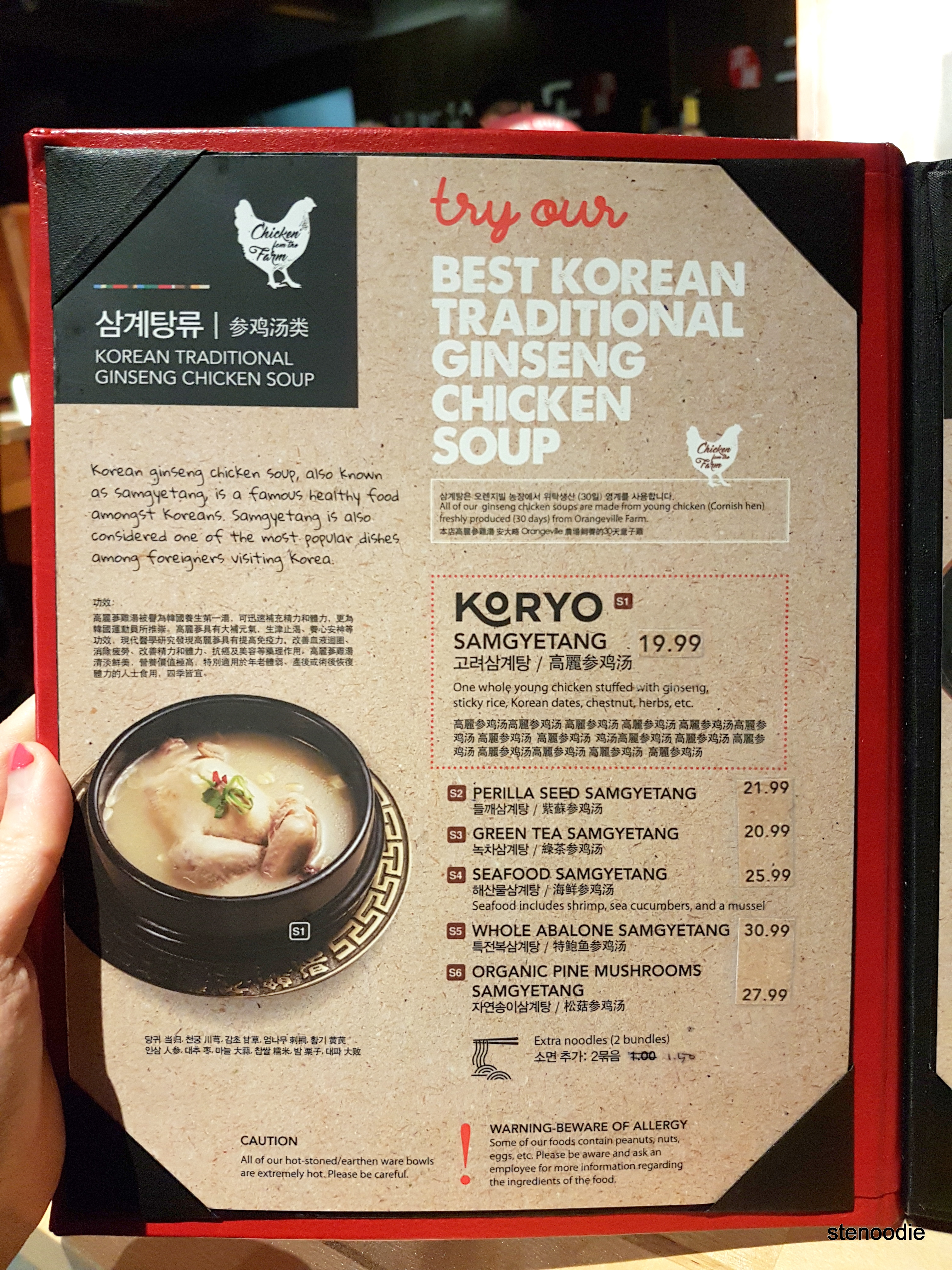 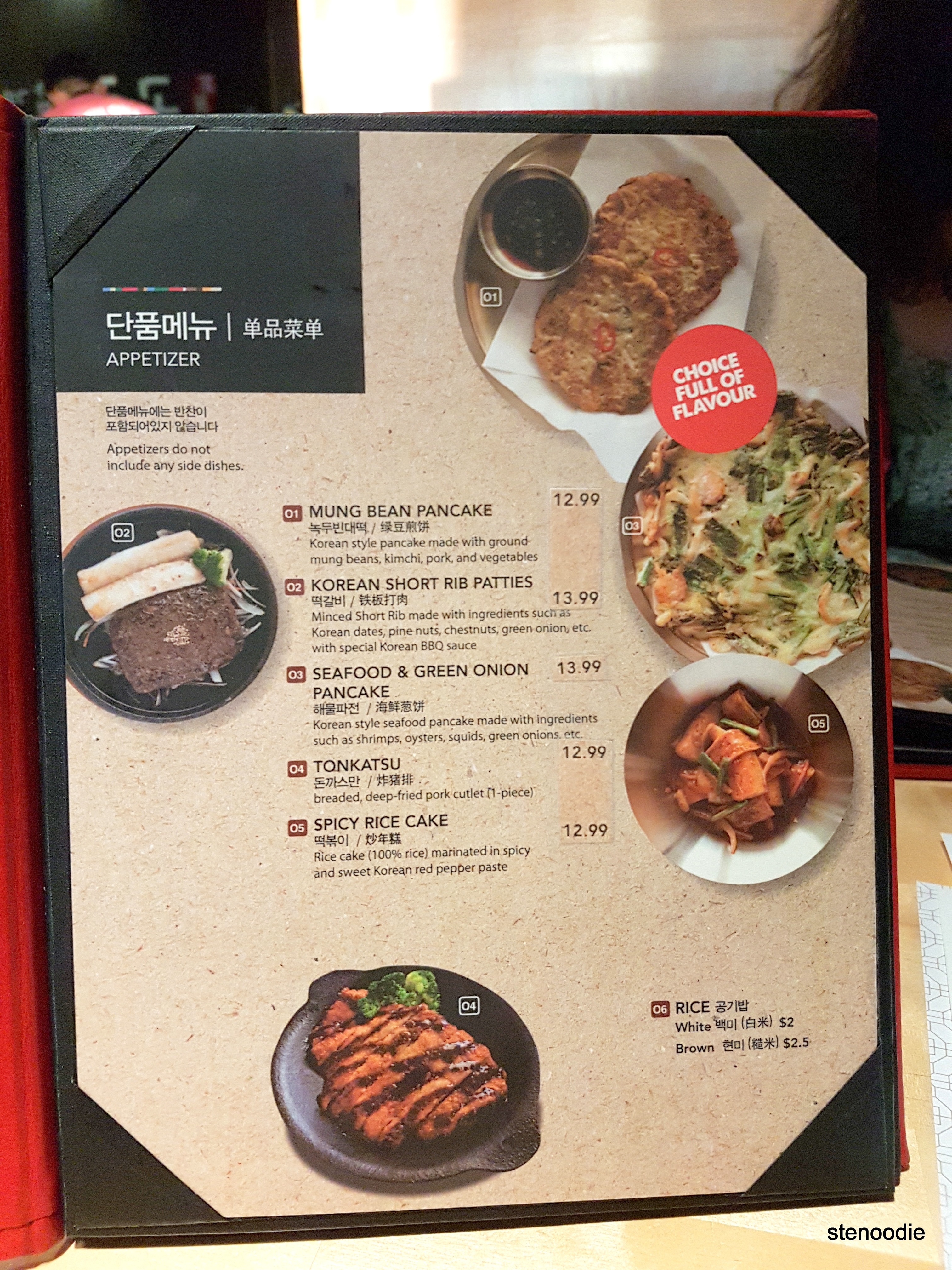 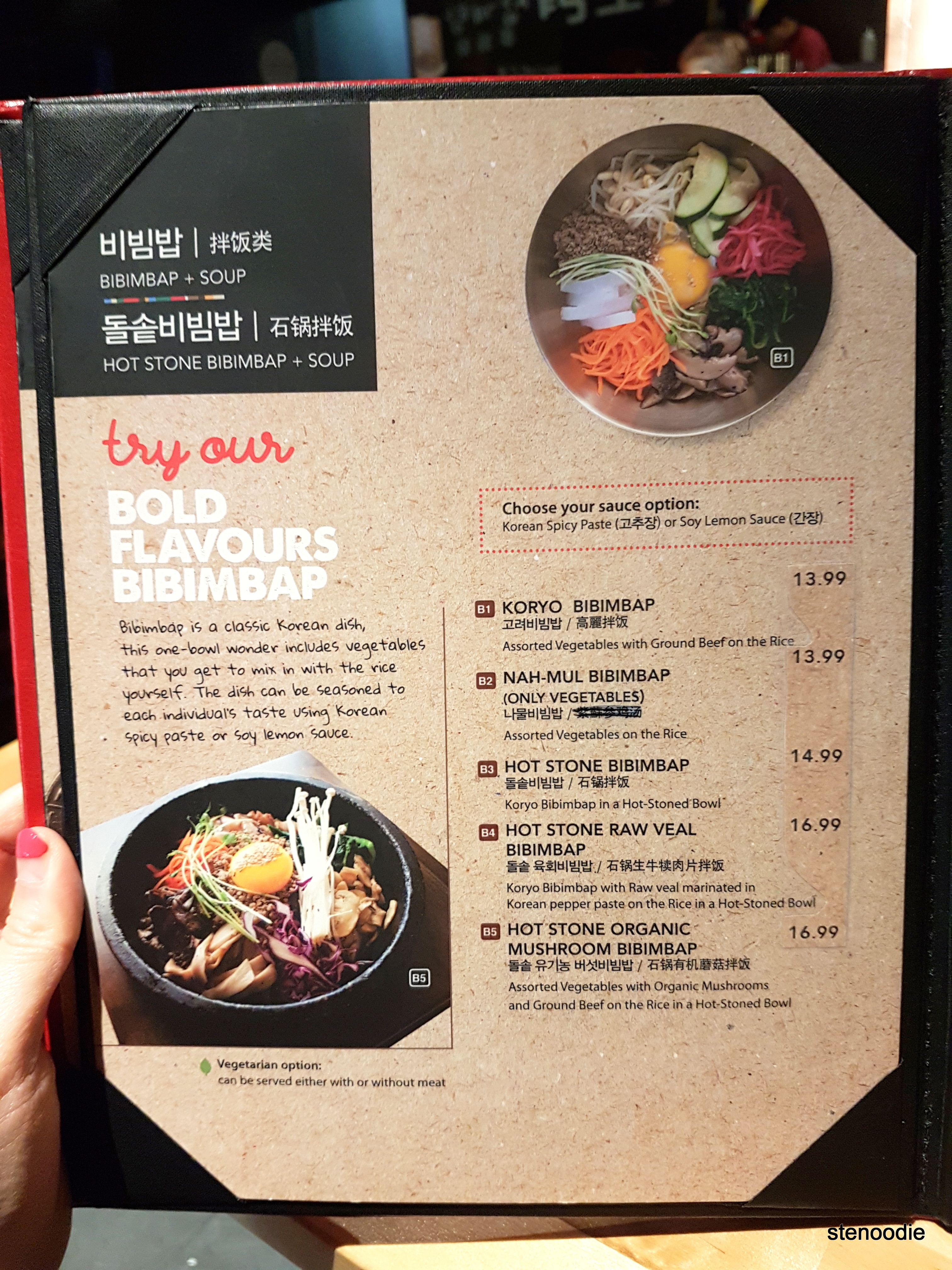 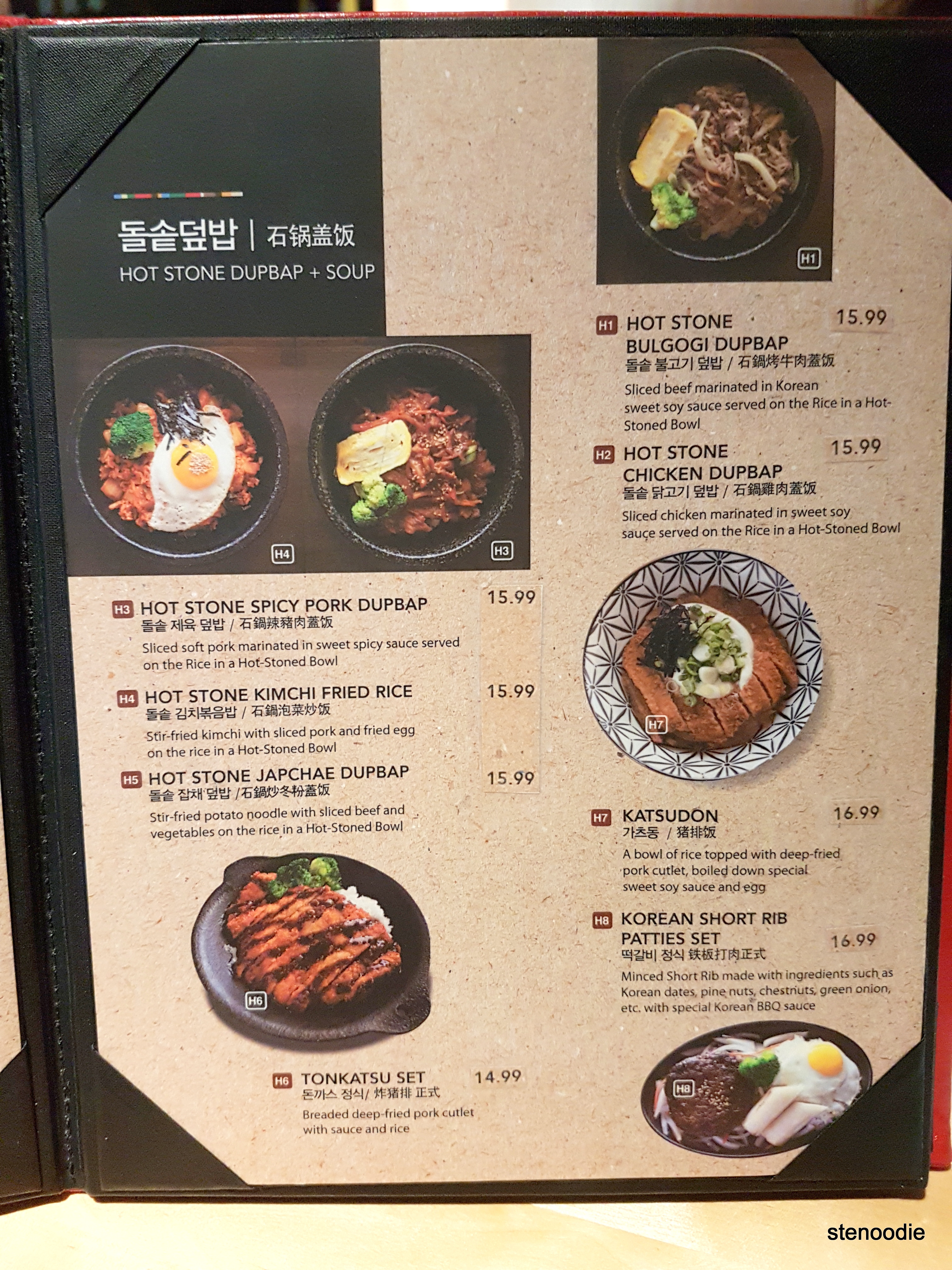 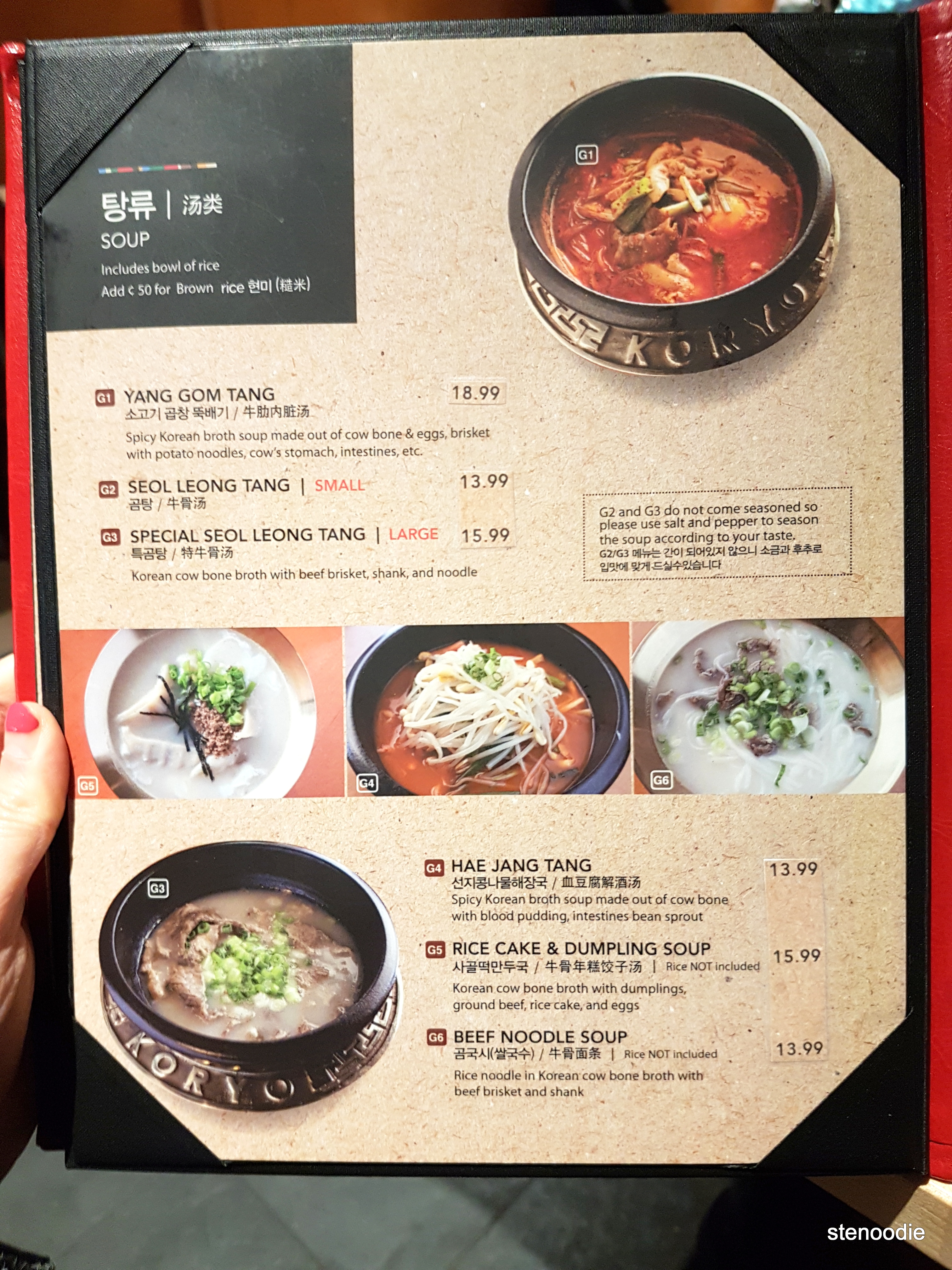 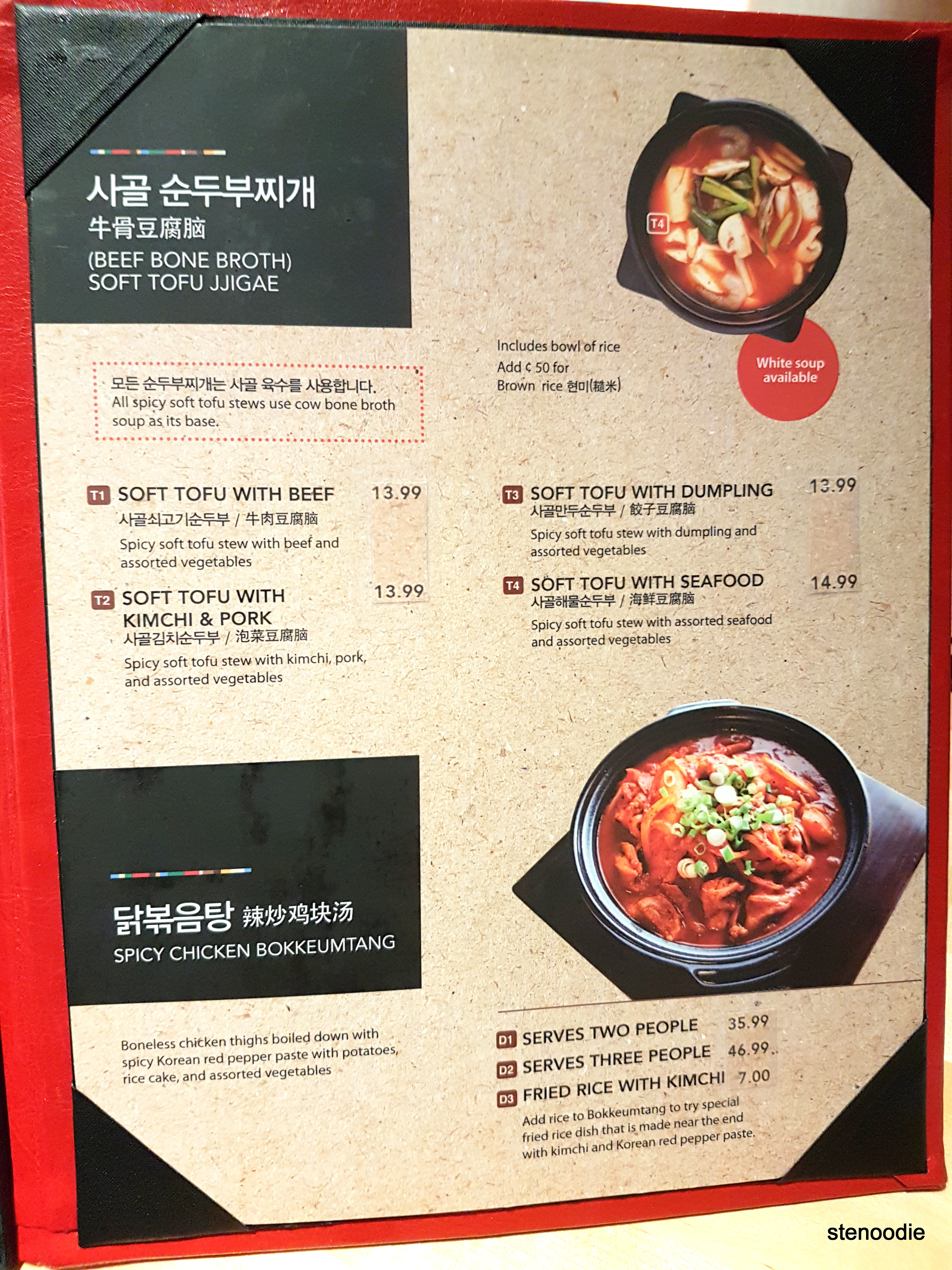 Koryo Samgyetang is known for samgyetang (hence, their namesake), which is ginseng chicken in soup in a hot stone pot.  They actually have various types of samgyetang in addition to their original one.  We ordered the original one since it was our first time here.

I was feeling some something soupy, so we also got the Rice Cake & Dumpling Soup (with Korean cow bone broth which sounded delicious). 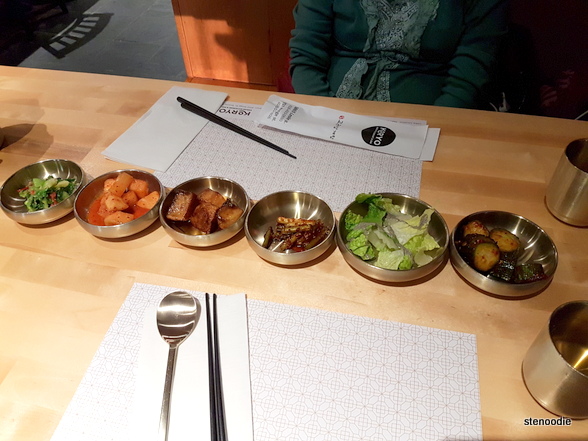 The server lined up all six banchan like this for us

After placing our orders, we were served six different types of banchan.  The banchan were ones that I hadn’t seen often in other Korean restaurants.  Everything was so pretty and delicate.  The banchan consisted of pickled baby bok choy, pickled cubed radish, sweetened potatoes, pickled sprouts of some kind, lettuce with a gray salad (sesame?) dressing, and pickled cucumbers.  The pickled items other than the lettuce, bok choy, and potatoes were all quite spicy. 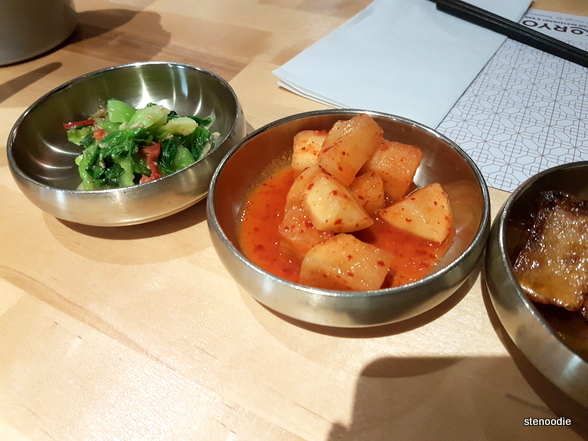 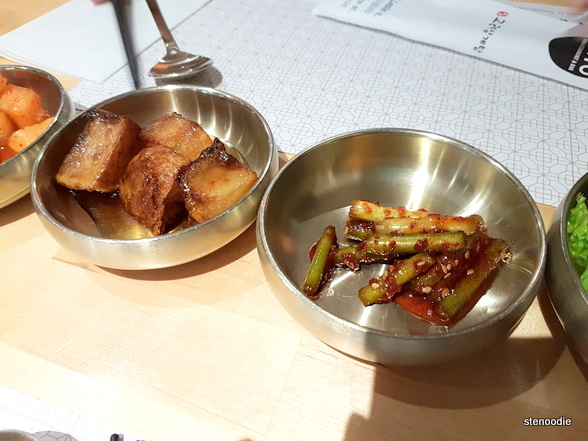 Sweetened potatoes and pickled sprouts of some kind 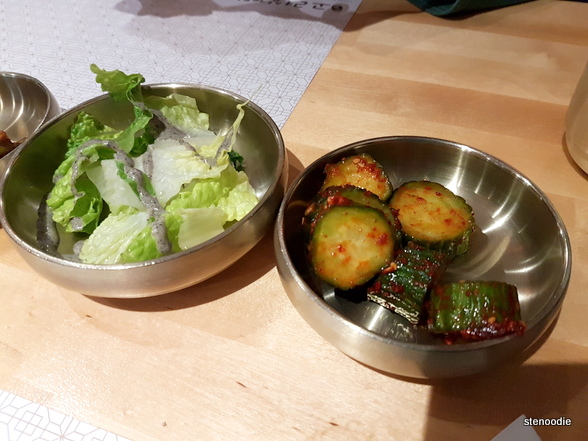 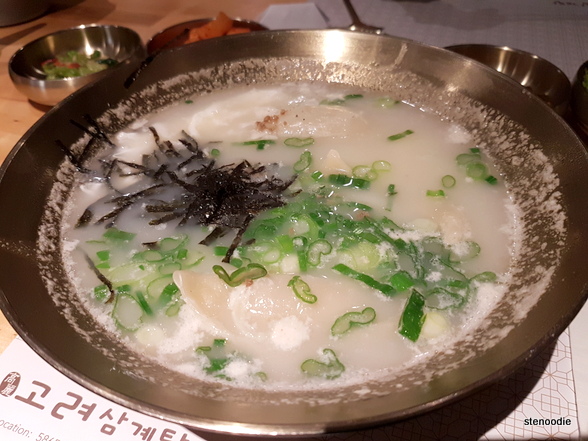 The Rice Cake & Dumpling Soup arrived first and appearance-wise, it didn’t look good at all in my photo (it looks like a big vat of bland soup haha).  However, it smelled really good and the taste of the Korean cow bone broth was amazing and exactly what I wanted on this evening for dinner.  It was so fragrant and infused with flavour (not MSG).  It had lots of rice cakes floating in the soup as well as several dumplings with ground beef and eggs.  I really enjoyed this dish. 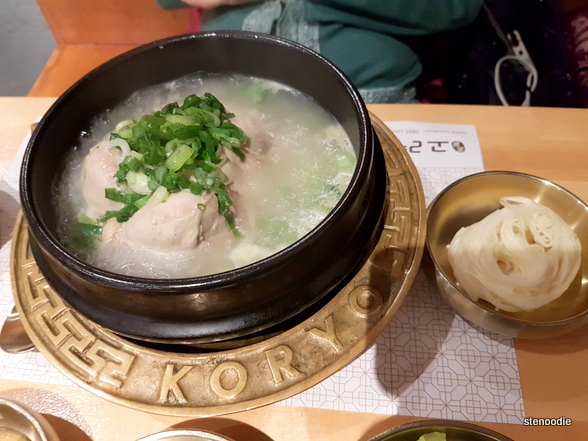 The Koryo Samgyetang arrived in a hot stone pot where the whole young chicken was stuffed with ginseng, sticky rice, Korean dates, chestnuts, herbs, etc.  For $1.50, we added two bundles of extra noodles.  (The Koryo Samgyetang itself comes with a single bunch of noodles already.)

I like this kind of thin and soft noodles.  (However, when you think about how you can get a big package of  noodles at the grocery store for about $2.50, $1.50 for two small bundles of noodles is hardly worth it XD.)

Mmm, this samgyetang smelled really good.  The broth in this was not as flavourful as the Korean cow bone broth in comparison.  The young chicken was quite tender, and this was a very filling dish.  We didn’t end up finishing it. 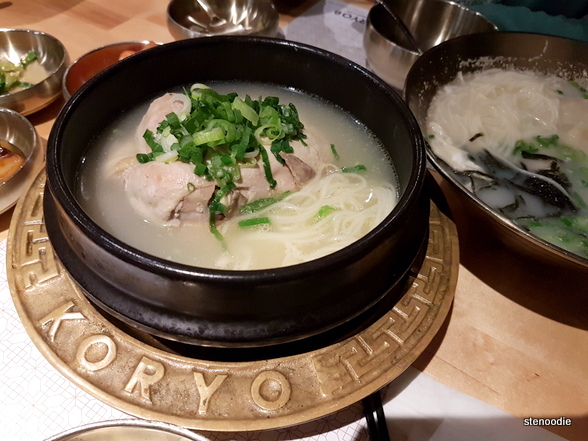 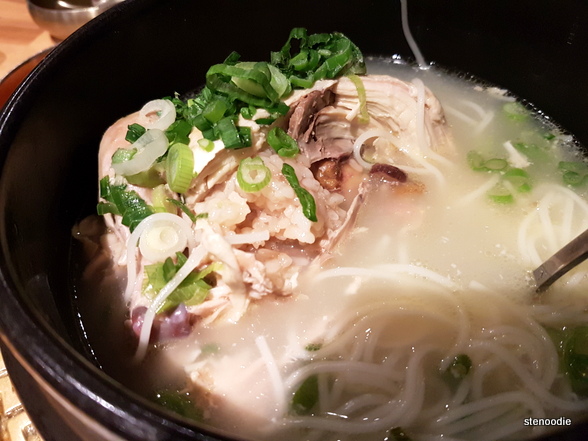 (Eating this samgyetang dish reminded me immediately of the time when we ate it in South Korea.  What an interesting experience and surprise we had there.)

We couldn’t finish both dishes, so we packed it up for another meal to enjoy at home.

I’m so glad that we were able to try out this Korean restaurant!  I’d come back to try their other dishes!  A great place to hangout and share their big portions of food with friends or family! 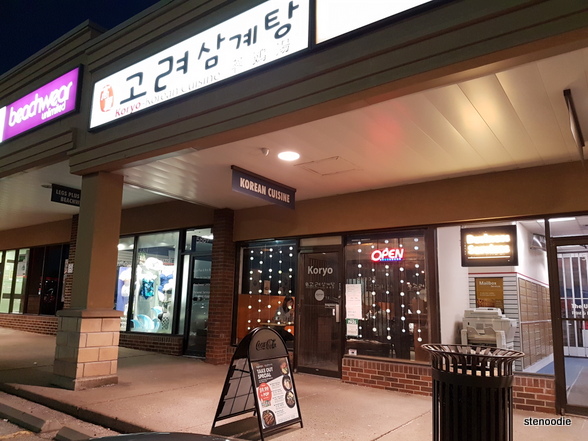 Storefront in the nighttime looks so much better