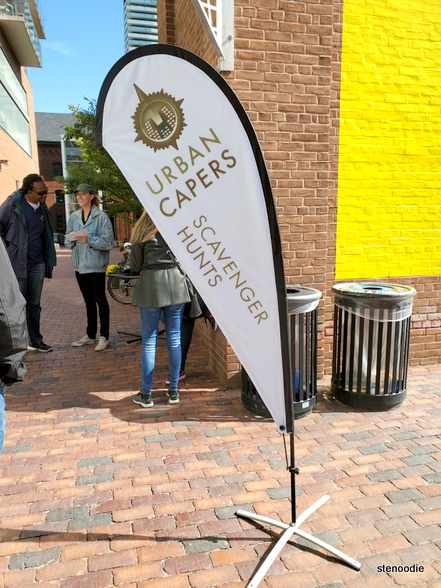 For my birthday this year, my husband (!) arranged to have us play “The Great Whisky Heist Mystery” game from Urban Capers Scavenger Hunts.  I love new experiences, and I love scavenger hunts.  Most of all, I love gifts that are experience-based and this was perfect!  He didn’t tell me what we were doing until we arrived at the Distillery District in downtown Toronto where the game was being held.  At first, I thought that the activity might have been a Segway ride (since I didn’t know what else there was to do at the Distillery District).  This was news to me.  I didn’t even know that these scavenger hunts existed in Toronto!

Apparently, Urban Capers Scavenger Hunts hosts these scavenger hunts and murder mysteries in cultural institutions and around historic neighbourhoods all over Toronto, like at the Royal Ontario Museum, Art Gallery, and more. 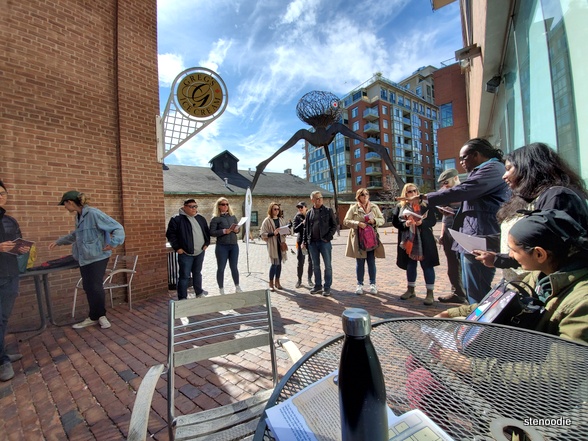 Our game began at 1 p.m. on a beautiful sunny and breezy Saturday. We arrived at the junction right in front of the Segways store and Greg’s Ice Cream where we signed in with the two Urban Capers representatives.  We then awaited more participants to arrive and received the instructions for the game.  We signed our lives away (haha), received the booklet for the clues, answer sheet, pencils, and a “dictionary” to decipher some of the slang terms.  After a brief synopsis of the story and what we were to find to win the game, we were off at 1:15 p.m.  We had two hours in order to solve all 18 clues and find out the answers to the two main questions:  Who took the money, and who took the booze.  We were to meet back at 3:15 p.m. sharp at the same place. 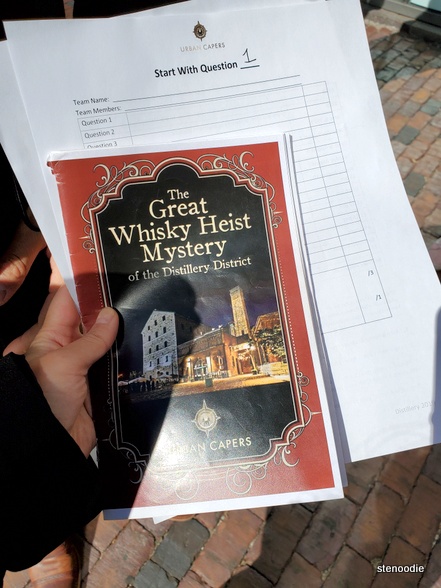 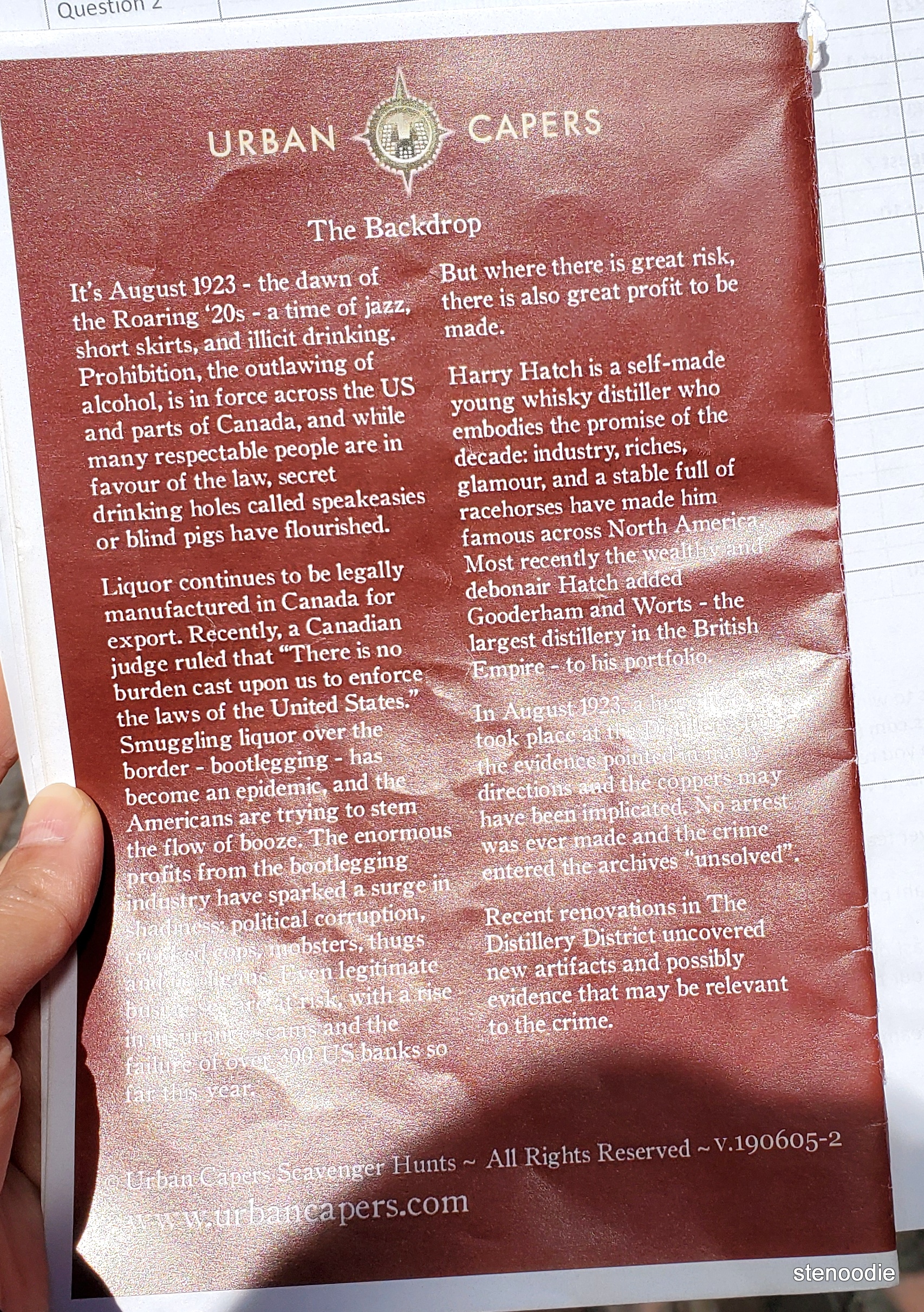 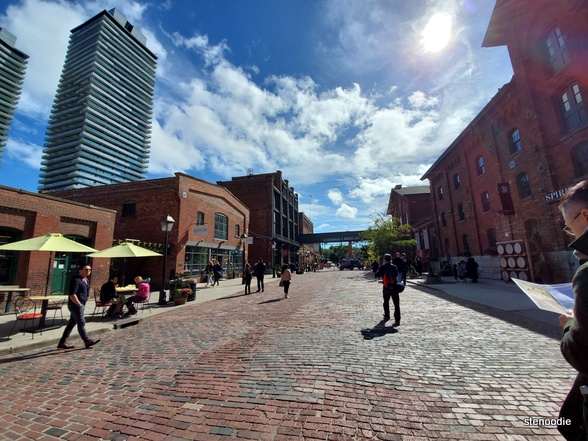 Ken and I had a great time walking through the different alleys and pathways of the Distillery District and surrounding buildings to try to solve the questions.  What I liked most was that I learned about a lot of the Distillery’s history that I hadn’t known before.  I didn’t know that there were so many internal hallways with olden-day distillery equipment and machinery throughout the entire place.  It makes for a really good place for a hide-and-seek session too actually. ^_^

We stumbled a little bit on the first couple of clues, but then we got the hang of how the questions and answers were worded and found and solved the rest of the clues easily.  By this point, the two hours were flying by.  By 3 p.m., we finished all the 18 questions and returned back to the original spot to try to answer the final two questions. 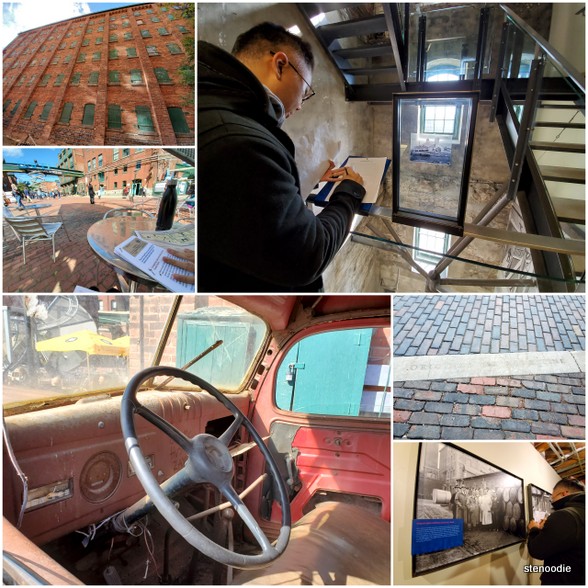 Trying to solve all the clues

In the end, we didn’t end up being one of the finalists to win a prize.  There were two teams who did, however!  They each won a golden magnifying glass, which was such a neat prize!  The representatives also provided the final answers and the complete story line of what happened; we found out who took the money and who took the booze in the story.

This was such a fun activity.  I loved that it was all active; no sitting involved!  We sit too much nowadays anyway.  It was easy and only required walking around a well-known attraction in Toronto; and now we know it even more!  I’m so glad that Ken found this activity for us to do on my birthday! ^_^

This scavenger hunt is great for any group of friends or family to play, co-workers for a corporate event, and even tourists!  You get to learn so much about the historic site while playing a fun game.

I also really liked how at the end of the game, the representatives collected all of our booklets, answer sheets, and pencils (presumably the booklets which can be reused for the next set of participants — we were told not to write on the booklets).  I loved how the booklets would be reused this way (and also probably so that the questions and clues wouldn’t be distributed anywhere else outside of the game).