Riding a Segway around the Distillery District!! 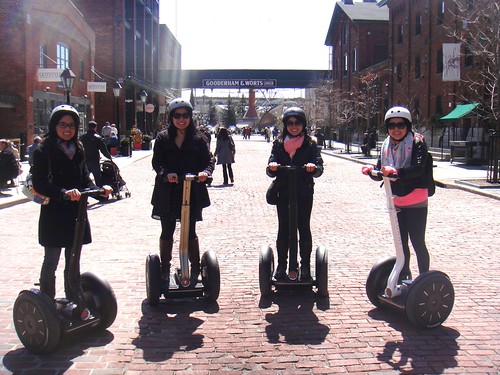 Segway Tour in the Distillery District in Toronto!

The first time I saw a Segway in person was last summer when I was in Nashville.  Cynthia and I were heading to the Grand Ole Opry and passing through the Opry Mills mall when I noticed a “mall cop” on a Segway.  I was so amused!  I’d only seen a Segway before in movies and didn’t know that mall cops actually existed.  I was so amused that I quickly snapped a picture and video of this.  A few minutes later, I saw another mall cop on a Segway.  Both of them were talking to each other while on a Segway.  Hahaha… I just couldn’t get over how funny it was.

Fast forward to last fall when my friend Holly linked us the Groupon deal to ride a Segway around the Distillery District!  This was one of the things she wanted to cross off on her “25 for 25” list (25 things to do while 25) so she immediately signed up for it.  I was a little hesitant at first, but hey, life is short and who am I to pass up on such a unique opportunity?  (Especially laughing over those mall cops I saw).  We bought it with two other friends and waited for the long winter to retreat before we booked our Segway visit. 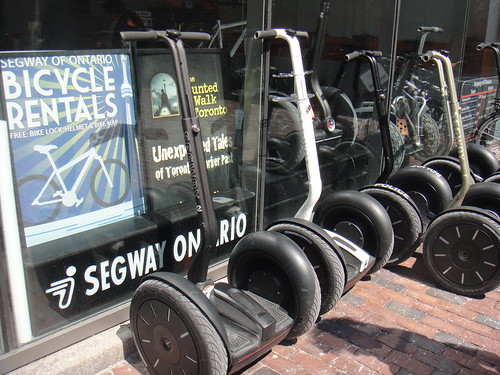 So here we were on a ridiculously perfect spring day in April.  The sun was shining bright.  There was a cool crisp wind in the air and there was not a single cloud in the sky.  It was a perfect spring day to do any outdoor activity!!  I was very excited for it but also a little nervous.  What if I fell off the Segway?  What if I can’t “work” it?  All questions were to be answered when we arrived at the beautiful historic Distillery District of downtown Toronto and arrived at the front door of Segways of Ontario. 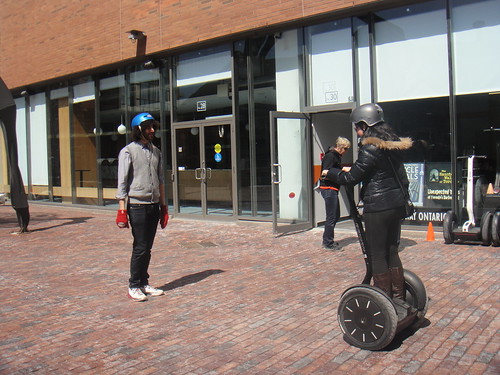 After signing in and signing a wavier form, Joseph and Pavlov (sorry if I butchered the spelling of your name!) showed us how the Segway worked.  Then we each got about 2-5 minutes of training on the Segway.  We learned how to get on it, go forward and backward, steer and turn (easy), and how to get off.  I had a little trouble getting off the Segway at first since it still moved toward me after I lifted one foot off.  Other than that though, the four of us were ready to go on our little Segway tour around the Distillery District!! 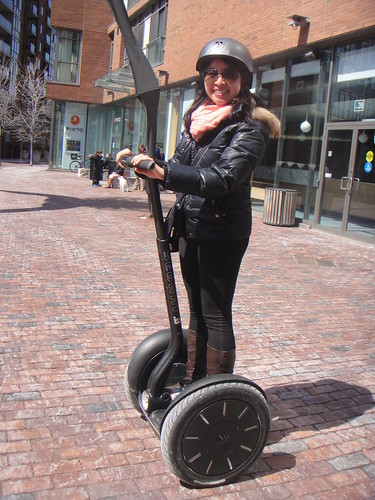 My first time riding a Segway!

My first couple of minutes on the Segway felt a little uneasy.  It’s not natural for human to move by simply shifting your weight towards the toes of your feet and moving forward automatically nor to stop or slow down (and go backward) by shifting your body weight towards the balls of your feet.  It definitely took at least five minutes for me to feel comfortable on it.

Joseph and Pavlov were amazing on the tour.  They stopped every so often at certain points in the Distillery District to explain to us the history of how the historic town came to be.  It was fascinating to learn that Lake Ontario actually was near where one of the clock towers were and now it’s receded so far back.  They were funny and genuinely showed interest and passion in telling us and showing us everything.  I really enjoyed it! 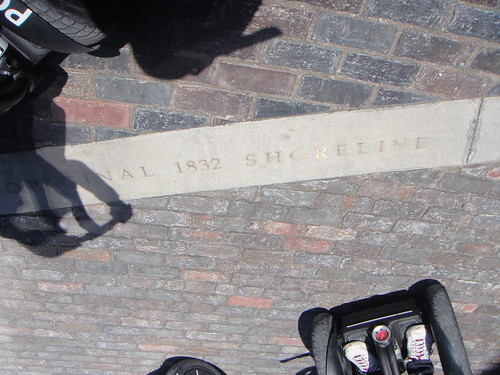 The original 1832 shoreline of Lake Ontario

Towards the end of the tour, I was really comfortable on the Segway!  I was going backwards and forwards with no problem and it felt a lot more natural than when I first got on.  It was ending too soon and our 30 minutes were up.  I can’t believe how fun that was! 😀  My friends all agreed that it was definitely a great experience.  I wouldn’t mind doing it again in the future.  Maybe we can try some other terrains and locations in the future! 😀

Have you ever ridden on a Segway before?  What was your experience like?  Where do you suggest riding on a Segway in the world?  Singapore?  Europe? 🙂 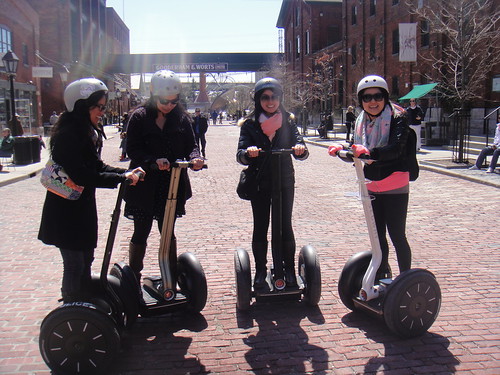 4 Responses to Riding a Segway around the Distillery District!!