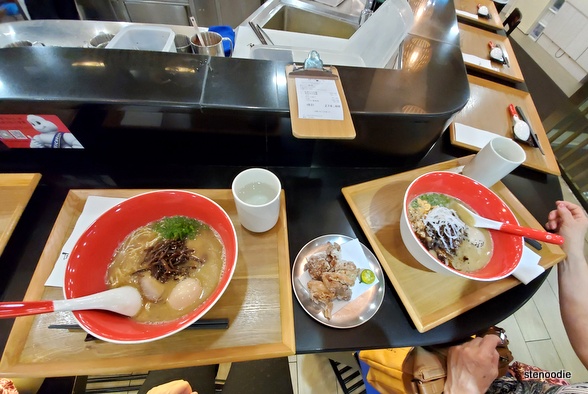 It was lunch time and when passing by the Harbour City entrance, I noticed “Japanese soba noodles” on the side of the storefront of this restaurant.  After passing by the restaurant again in a few minutes, we decided to stop into Tsuta for lunch. 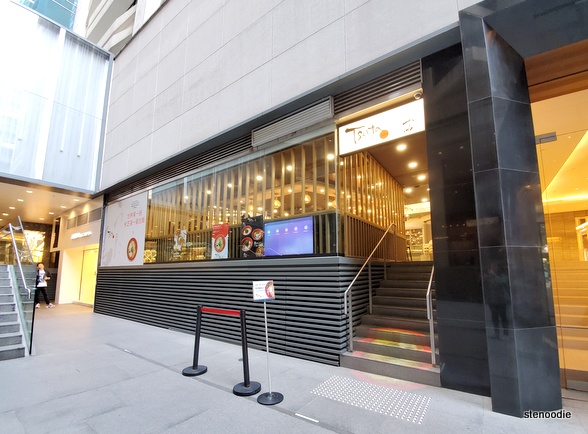 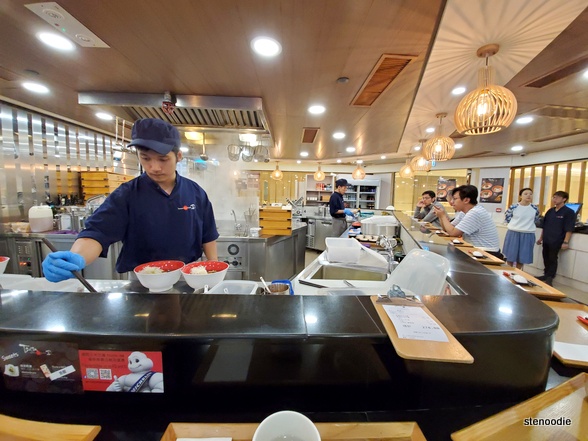 View from my seat at the ramen bar

The restaurant composed of high stools along the kitchen counter area in a semi-circle as well as low seats at regular tables.  Of course, I opted to sit near the kitchen bar to watch all the cooking action.  Each seat at the bar already had the ramen tray, chopsticks, spoon, and napkin ready for the customer. 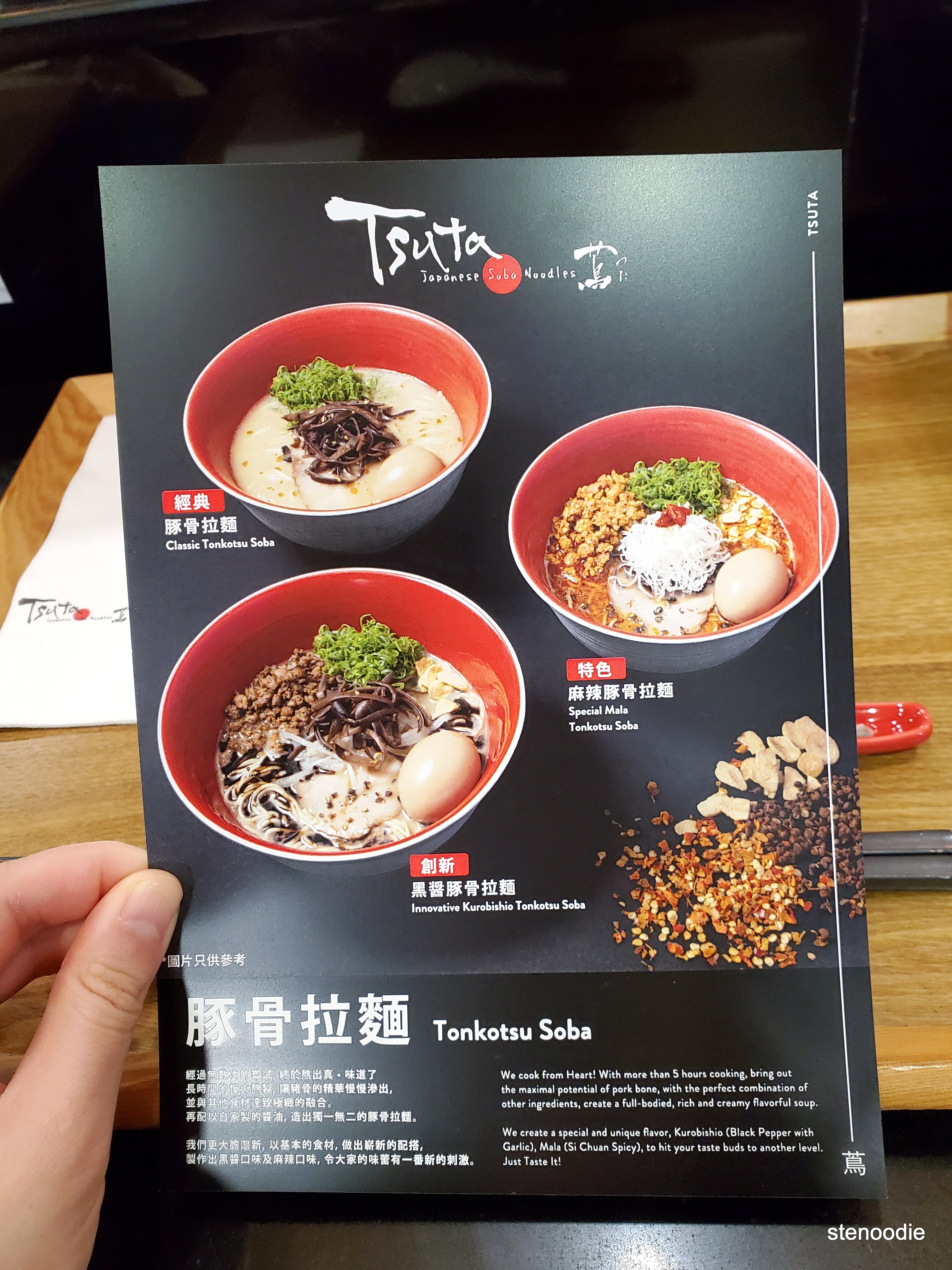 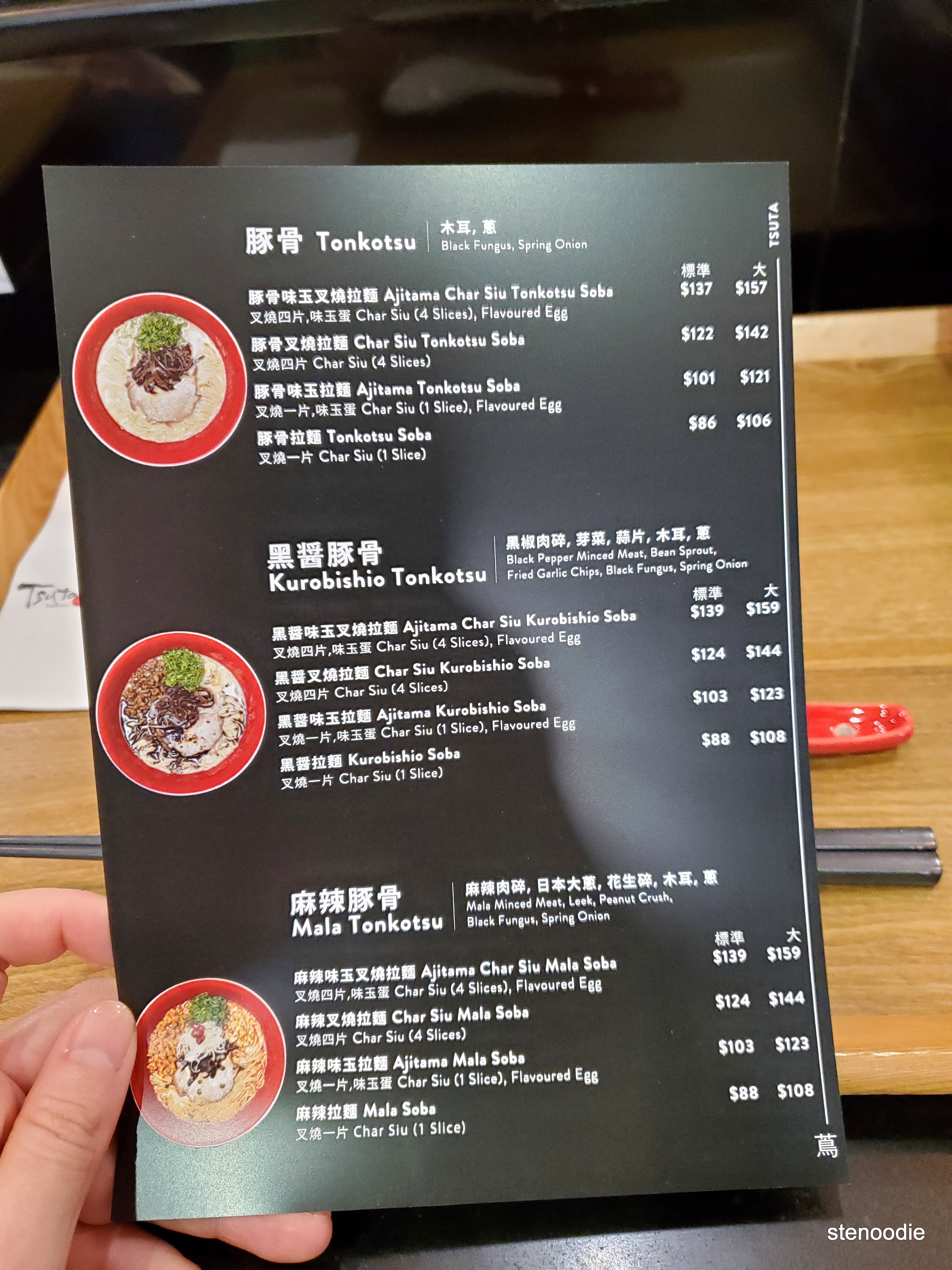 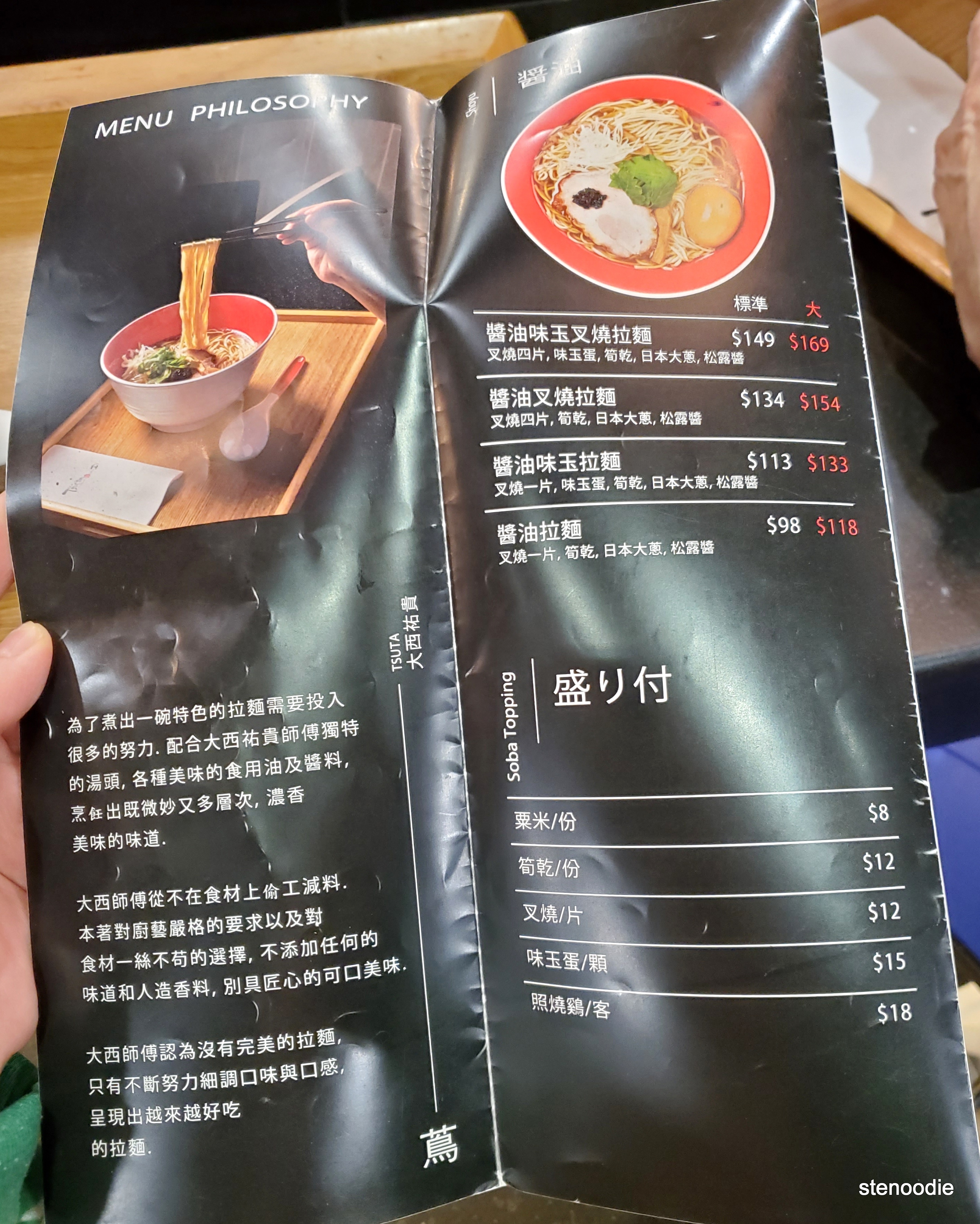 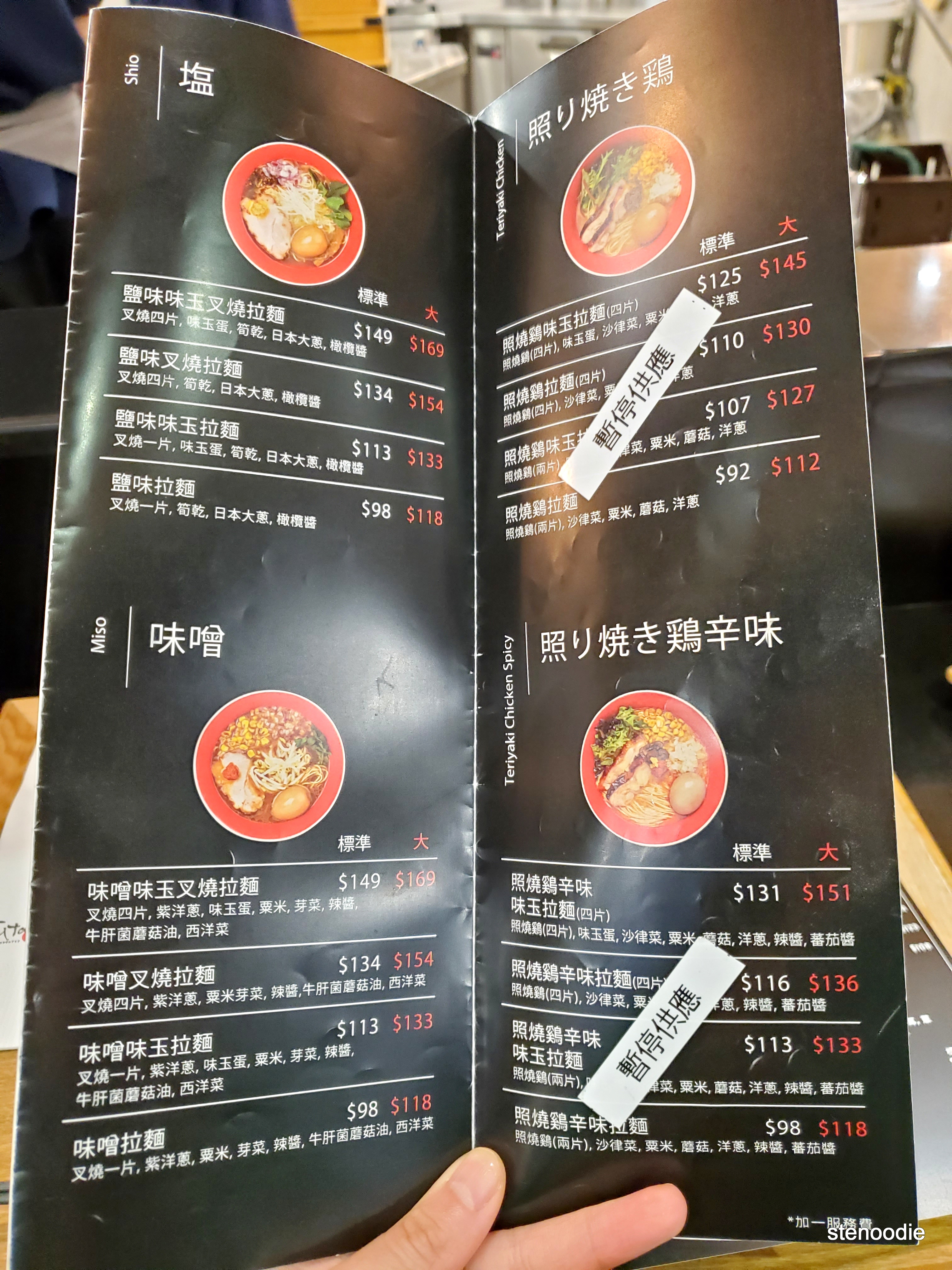 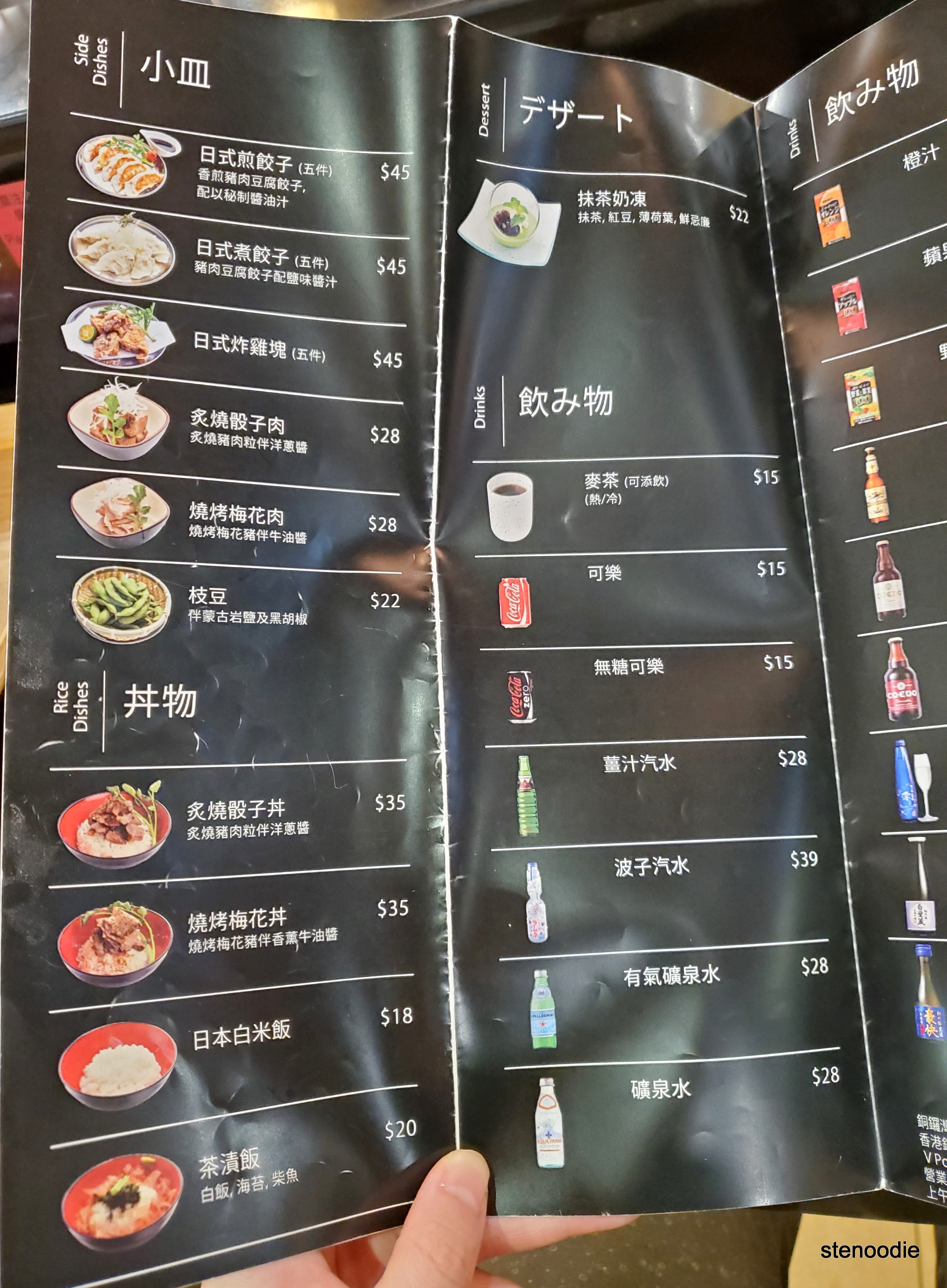 Side dishes, rice, and drinks menu 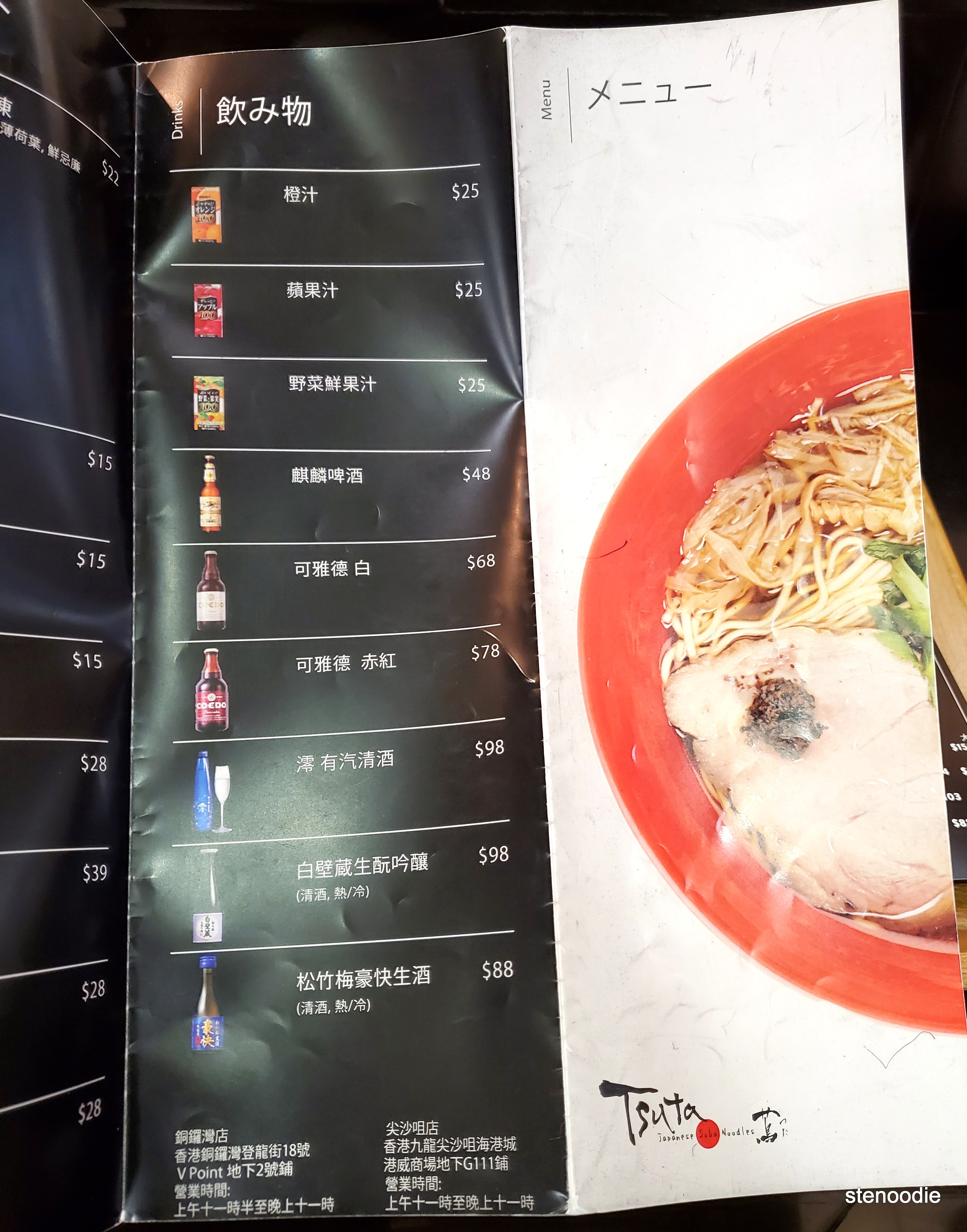 I ordered the classic Ajitama Tonkotsu Soba noodles (black fungus, spring onion) with char siu and egg while my mom ordered the Kurobishio Tonkotsu ramen (black pepper minced meat, bean sprout, fried garlic chips, black fungus, and spring onion) also with char siu and egg.  Both of our bowls had one slice of char siu.  You could select an option with four slices as well, but since I wanted to try a side dish, one slice of protein was enough for me. 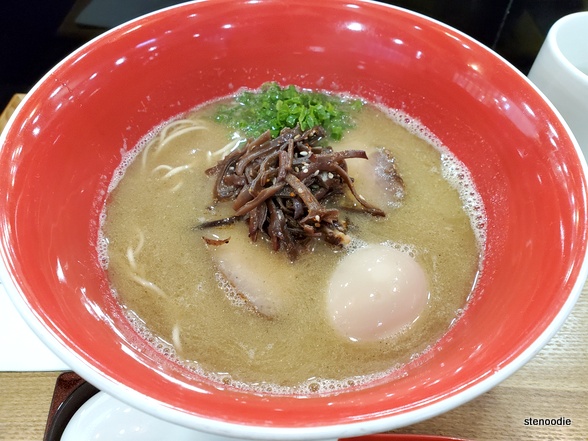 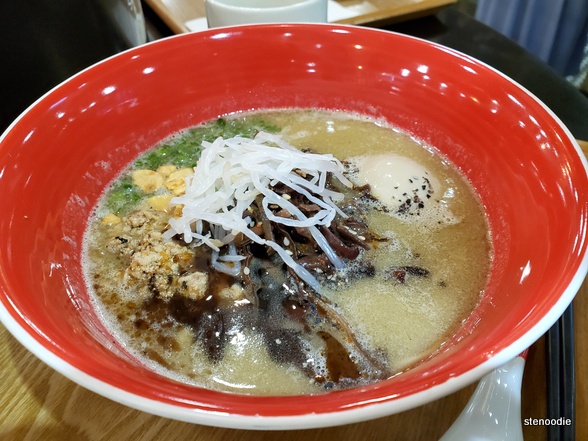 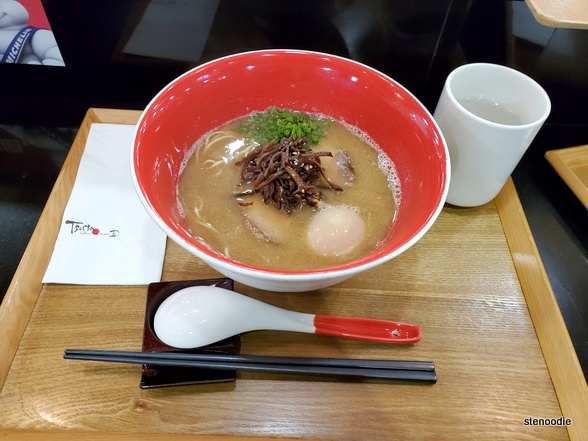 Ajitama Tonkotsu Soba in the tray

It was nice to watch the chefs prep, cook, strain the soba noodles, and then plate them into the bowls.  I watched as they poured exactly one small pot of the tonkotsu broth into each bowl, flip the noodles once with a pair of chopsticks, and then insert the various ingredients into the bowl.  When the bowl of ramen was finished being cooking and assembling by the chef, it was brought directly to us over the counter.

The broth of the Tonkotsu was thick and dense and a little salty as expected.  It was difficult to enjoy the taste of the broth since it was so dense.  The noodles were made of soba and were a very good texture and firmness.  I liked it.  The portion wasn’t very large though and this single bowl of ramen was definitely on the higher end of the price scale.

The char siu was thin and flavourful (surprising since it came from a big Tupperware filled to the brim of char siu; somehow I thought the quality would be diminished that way). 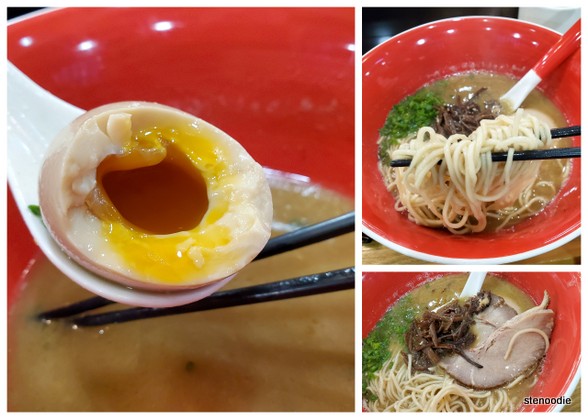 Look at the egg! So beautiful. You can also see the texture of the ramen here as well as the single slice of char siu

The best part was the flavoured soft boiled egg that was perfectly half cooked.  When I bit into it, the egg was SO soft.  Since I knew that the yolk was going to be half done, I sucked out the yolk too.  The photo shows how perfectly cooked and soft the egg was with the molten yolk.

The side dish that I ordered was, surprise, surprise, none other than the Japanese fried chicken (although the gyoza could also have been a good contender to try).  There were exactly five pieces of fried chicken on the dish with a tiny piece of lime.  The meat of the fried chicken was super moist and chunky while the fried batter was white and fluffy.  It was interesting.  This was a very delicious serving of fried chicken.  The five morsels were perfect as a snack. 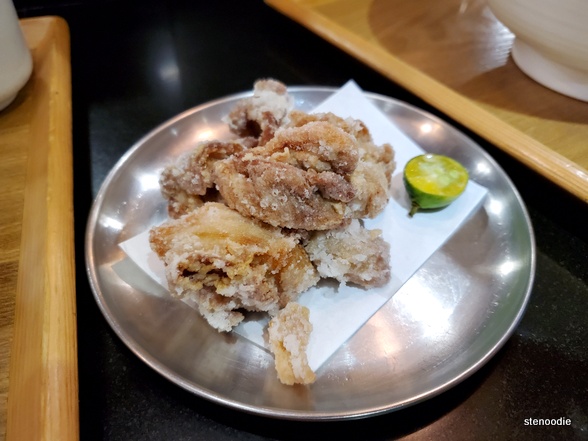 The service was all right considering we were in upscale Harbour City TST area.  The staff could have been more focused at being professional and courteous.  I say this because the staff were mostly chitchatting with each other and didn’t consistently greet each customer in Japanese as they entered and/departed the restaurant. 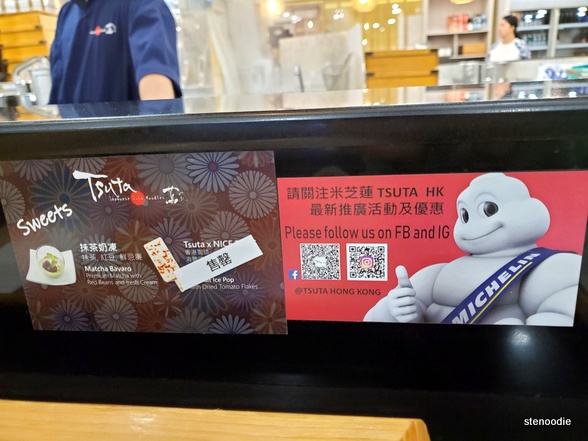