Pulling a 757 Cargo Jet for ORBIS! 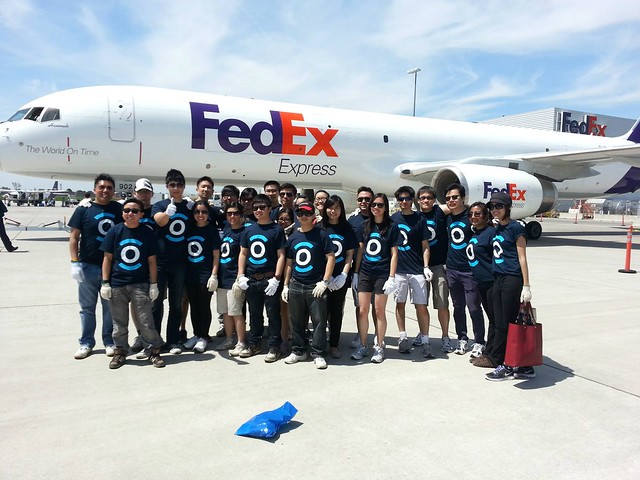 On June 1, a team of 24 friends and I pulled a 757 cargo jet to raise awareness and fundraising for ORBIS, an organization that helps eliminate childhood preventable blindness in developing countries! 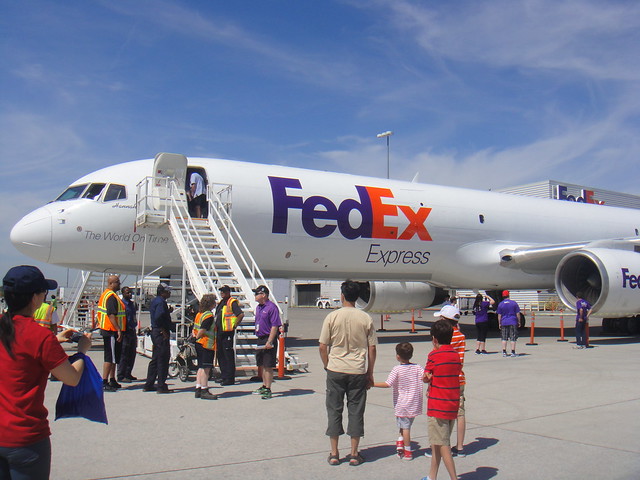 We pulled this plane! It weighs 60 tonnes!

The first time I heard about ORBIS was around a year ago when I noticed that a friend of mine, Evelyn, had posted pictures of her and her team participating in something called a plane pull.  A plane pull, I thought?  What is that about?  It looks like so much fun!  So I clicked onto the ORBIS website and realized that this unique organization helps solve blindness and eye issues in developing countries for children.  What’s most special about them is that they have a “flying eye hospital” which is essentially a airplane that is fully equipped with devices and tools to perform eye surgeries onboard the plane!  How cool is that? 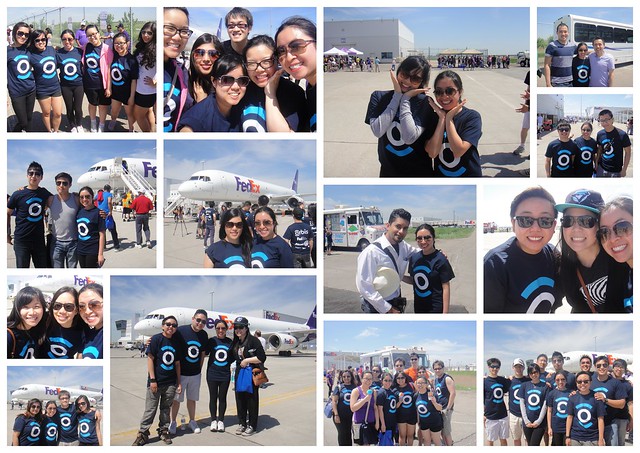 All my friends from the plane pull. You guys are awesome!

Personally, I think that vision is one of the most important and essential five senses.  Without sight, you are unable to enjoy so many of life’s pleasures… taking pictures and viewing food pictures wouldn’t be of much interest to someone who is visually impaired, for example.  I hope no one ever has to suffer problems from sight. 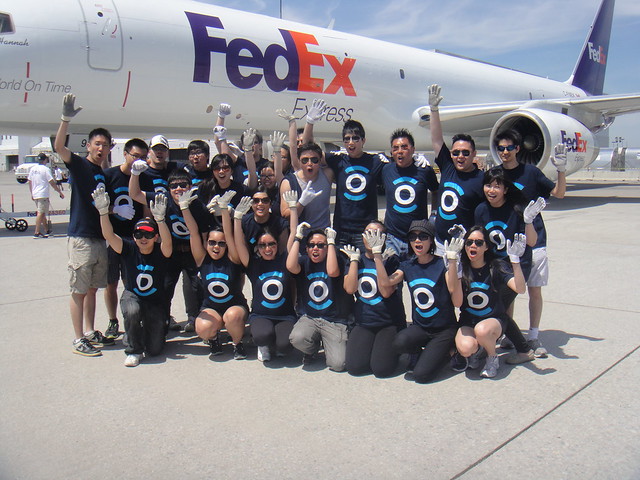 So for this year, when I found out literally 2 weeks before this year’s 6th annual plane pull was going to happen, I immediately messaged several friends to see who would be interested in pulling a plane with me.  Once I had several people interested, I created a Facebook event and also registered a team on the ORBIS site.  Long story short, I was able to pull together a team of 25 people (in which 21 was the minimum number of people required to pull a plane and also the maximum number of people that could be in a team).  I was very impressed with everyone’s dedication to the event and how we were able to raise over $1,855.01 during the short week of fundraising.  It’s so amazing how much we can do if we just do it together as a team. ^_^ 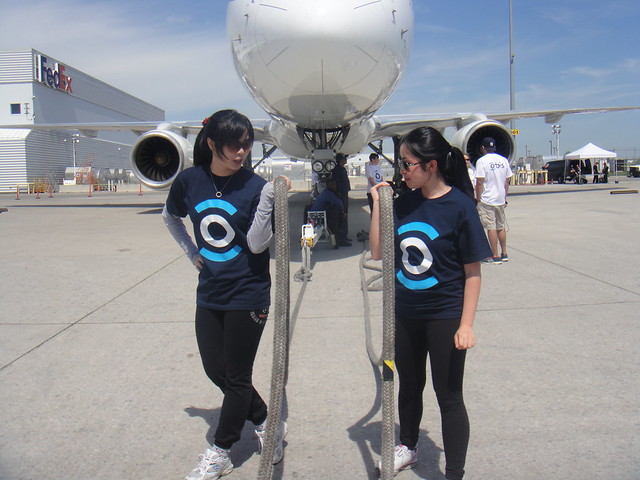 Carol and I at the start of our photoshoot lol

Before the event, I also created a Google spreadsheet for everyone to sign up for carpooling if they required one.  With 25 people traveling to one spot from different parts of the city, it made sense to carpool together to the FedEx Apron where the plane pulling would be taking place.  On the morning of the event, we all arrived there safely and successfully (minus a few mishaps where my car thought the plane pulling would actually be taking place at the Toronto airport lol… oops!).

Carol and I taking some action shots before the actual pull

We were blessed with beautiful clear skies and perfect spring weather that morning.  Our pull was at 11:50 a.m. and we were the fifth team to be pulling that day.  In total, there were 29 teams!  It’s a really big event even though most people still don’t know about ORBIS.  Most teams comprised of corporate teams and schools who were participating in it together.

After registering at the table — I was team captain 😀 — we tore into our ORBIS T-shirt gear and took some pictures together.  My friend Ben was nice enough to come solely to support us and as the photographer of the day.  There was a brief opening ceremony with a warm-up with everyone to loosen up our muscles. 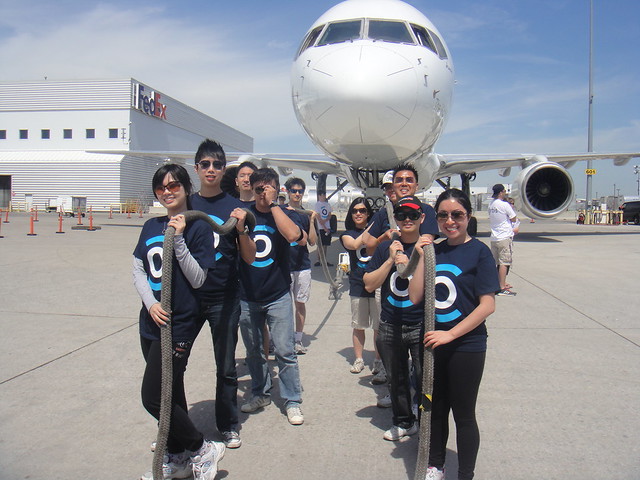 Our team is ready!

Very soon after that, it was our turn to pull!  We really didn’t have a big plan except that the guys would go to the back of the rope and the girls would be at the front.  We were given sturdy moving gloves too.  At the sound of the horn, we pulled with all our might.  We were to pull the huge plane 12 feet and it was a friendly competition to see which team could pull it the fastest.  Our team pulled it in 8.71 seconds!  Not bad for our first time.  We were all very surprised with how fast the pull was.  It wasn’t until a few seconds into the pull that the horn was blown again and we stopped.  We all high-fived each other for a job well done.  It was so much fun!! 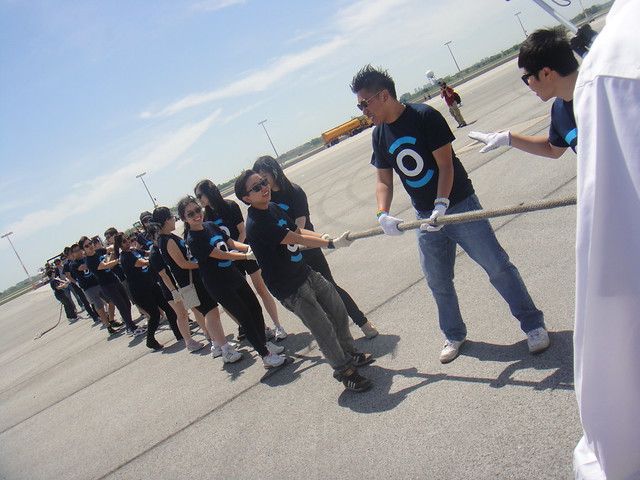 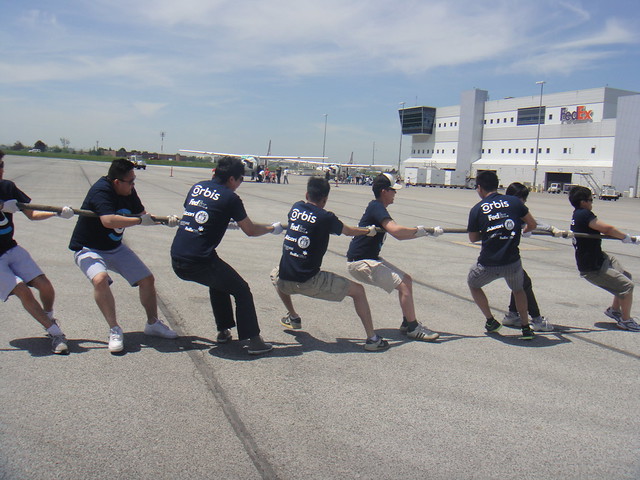 Our participation at the event also included a pizza lunch with a bottle of water.  We were all parched from the heat and excitement.  I got a pretty decent tan that day from being out in the open sun for those couple of hours.  It was so fun!  I felt very blessed that I had so many friends come out for the event, some of whom weren’t even pulling the plane but came out to the airport area for support.  I can’t ask for better people than that!  Thank you, guys!

Some of us stuck around and we got some delicious ice cream cupcakes from “Pretty Sweet”, a mobile cupcakery.  I loved how moist the chocolate cake was.  Mmm! 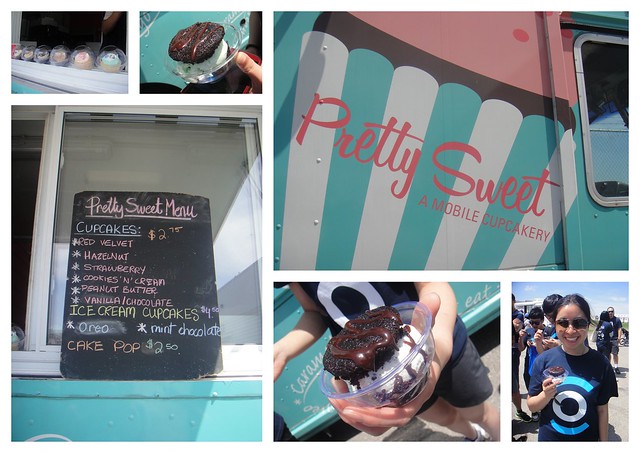 Thank you for sharing your ice cream cupcakes with me, Melissa and Jenny! 🙂 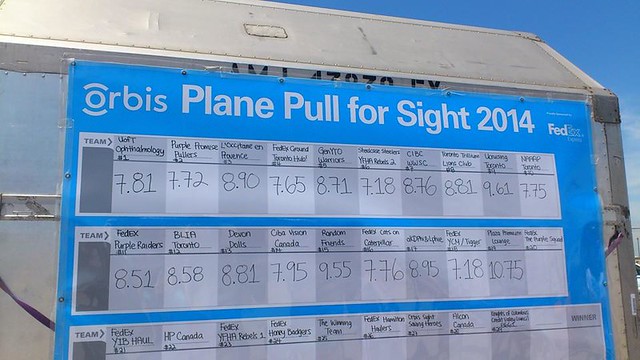 Some of the plane pulling results

Thank you again to everyone who donated to our team and for helping us raise $1,855.01.  That is seriously no easy task.  We had an amazing time, an opportunity that was truly unique — how many of you can say that you’ve pulled a 757 cargo plane before?  The best part was that we got to expose ORBIS and bring awareness to what they do.  I truly think ORBIS is one of the best organizations out there with a truly noble cause.  I’m very happy that I was able to support them and have fun in the process.  I’m going to try my best to keep my eye out on it again for next year and hopefully pull together another team to pull our second plane together!  Teamwork rules ALL! 😀

*Also, kudos to YOU who read all of this till the end!

6 Responses to Pulling a 757 Cargo Jet for ORBIS!