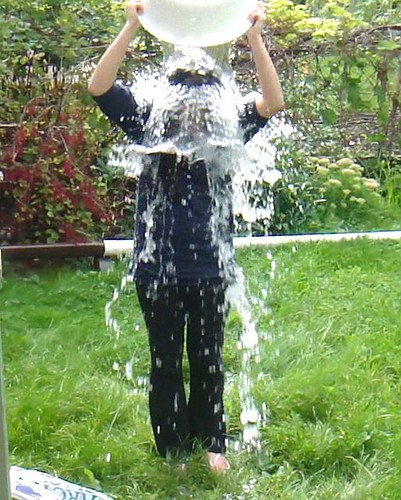 ALS Ice Bucket Challenge — I did it.

I know, I know, there’s been a ton of controversy surrounding this particular charity phenomenon that’s been going viral around the globe.  Here are my thoughts around this activity:

First of all, this is for charity.  Anything that people do for charity, other than just standing on the street to canvas for donations, will be something out of the ordinary (even that can be called extraordinary).  Nowadays, people want attention and if you just merely film a video about a person talking about an illness that deserves attention and awareness, maybe 1 out of 10 people will actually watch that video.  If you put in a 10K race where thousands of people participate, a 5K race where people are colour bombed (i.e. Color Me Rad or the smaller version, Colours of Hope), pulling a plane for charity (ORBIS plane pulling event for sight), and many other charitable events, all of these require time, effort, materials, people, and a unique idea.  Without any of these, none of these events would attract participants. 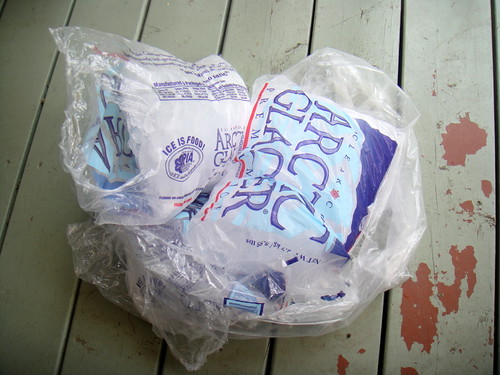 Four of us actually did this ice bucket challenge in the same location. It was so fun for us to witness each other doing it and filming it for each other. How many chances do you get to do this with friends? (Bonding experience)

By hosting a single charity event, you NEED to have materials and money to “waste” or INVEST in order to carry out these charities.  The biggest problem that people have with this Ice Bucket Challenge is that people scold that we are wasting fresh, clean water and dumping that on our heads in order to not have to donate $100 towards the charity.  I don’t believe that this “wasting” of water is any different from how people are “polluting” our environment with those colour dyes or “wasting” materials to be created for events like marathons and races — which all contribute to a good charitable organization.

Some people are complaining about this viral event because they think it’s egotistic and people are merely doing it for fun and knowing nothing about the illness.  I think the mere fact that people are saying the words “ALS” and recognizing it as a disease is more than an achievement in itself already.  If it wasn’t for whoever that thought of linking this ice bucket challenge and ALS, so many people wouldn’t know about it.  For me, I know it definitely was the case.  I am so thankful that I got tagged and challenged to do this because now I know about ALS when I didn’t before. 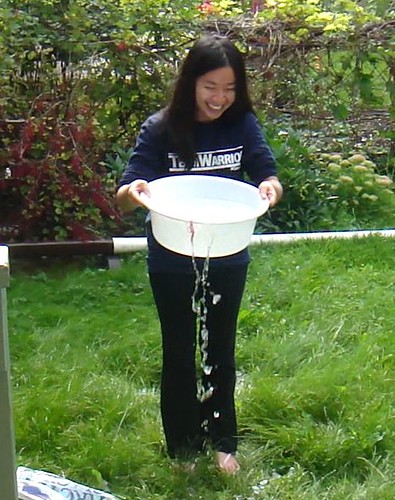 We laughed so much… you know I definitely did lol

I also got the chance to bond and do a fun activity with friends that I never would have done otherwise if I wasn’t “challenged” to it.  I know when I first heard about this ALS challenge the first week that I started seeing videos like this on my Facebook page, I definitely didn’t want to participate in it… I didn’t want to get ice water on myself.  However, as the idea carried on, it became more of a social activity to participate in.  When was the last time that you witnessed such a powerful activity touch and connect almost every single person that you know on your Facebook friends list?   I saw the videos of so many people that I hadn’t seen in years in person participating in this challenge.  If that isn’t a powerful social media tool and persuasion technique, I don’t know what is.  Some people need to not take things so seriously and go with the flow.  Yes, water is a precious commodity and we seem to be “wasting” it, but think of the times that you leave your lights on or the city or government leave all their building lights on for the sake of safety.  If you really are going to be anal about saving our resources, there is so much more that we can do out there instead of just pitching and complaining about a bucket of water that is going to be wasted.  I seriously don’t think it’s that big of a deal and look, two weeks later and everyone is over the ALS ice bucket challenge.  It’s a fad!  It’s a trend!  Just roll with it.  Life is so short and when we find something so short and fleeting that everyone can connect with, I think it’s truly something to applaud over.  This further proves that if we have a good idea that is replicable, anyone can do it and we can all share and make it viral.  We need more good ideas and people who are willing to carry it out.  Let’s all actually learn more about each other and connect on a personal level.

With all that, here is the video that I did: