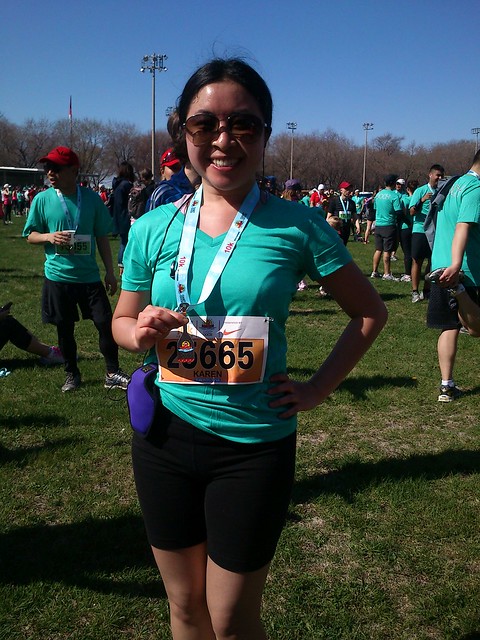 Yay!  This was definitely something fun and challenging to accomplish!

When my friend Holly pitched the idea of doing a 10K to me and Joyce, I was quite hesitant.  Actually, she pitched the idea to me after I ran my first 5K and second 5K’s.  Both 5K races were really more fun than competition/full out running.  The first 5K was similar to the Color Me Rad 5K where you get color-bombed as you run through stations staffed with people ready to powder you but it was called Colours of Hope instead since its proceeds benefited the Canadian Cancer Society (view blog here).  For my second 5K, I half walked and half ran it.  It was a really fun one — the Ugly Christmas Sweater 5K!  We ran through huge inflated Christmas ornaments in the middle of November and celebrated with free beer at the end.  I felt more accomplished at this one since I ran most of it (view blog here). 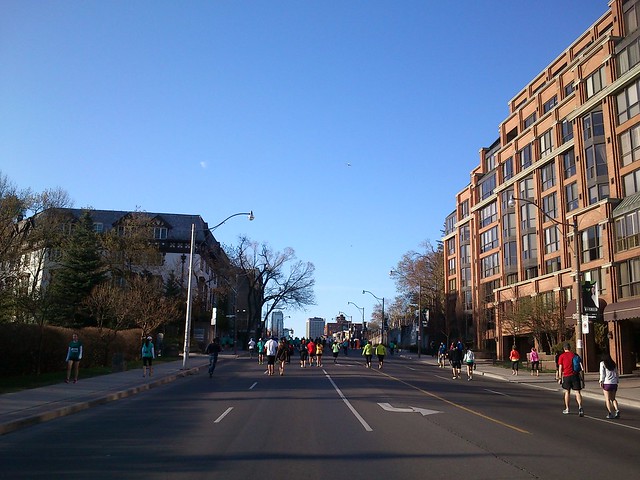 Yonge Street early in the morning. We were walking towards the Start Line!

So, I decided that a 10K would be doable as long as I trained for it and pushed myself to do it especially since I had completed these 5K’s before too.  Haha…  this was totally different and did require some training.  If it weren’t for the fact that I do some intense cardio Zumba classes every week, I don’t think I would have made it.  I also went on the treadmill a week before the 10K (lol) and I also ran on the treadmill while on my recent cruise because I felt guilty after eating so much food.  Other than that, I really didn’t do any extra training.  I’ve heard of others not doing any training for this 10K either since it’s a downhill run from Roselawn Ave. on Yonge Street and curving along various streets to finish at Fort York Boulevard.  That was the mentality I took when postponing my workout sessions in my head.  A few days before the actual 10K, I actually got really anxious about it.  What if I couldn’t finish it?  Should I just walk it?  Hey, yes, that’d be easier.  I can just walk the 10K instead of running it!  Easy peasy! 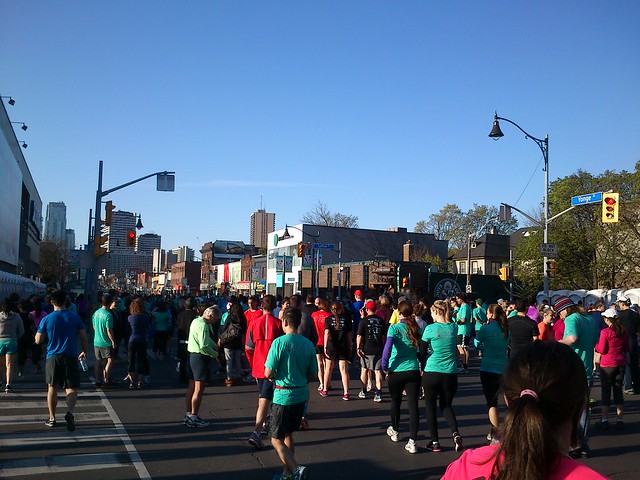 Yonge Street! The longest street in the world.

When I told Holly about this, she was appalled:  “No!  Don’t walk it.  It’s going to take you over 2 hours!”  Then she gave me some sound advice:  “At least run the first half and walk the second, but don’t walk the whole thing!”  She was right.  It’s not like I couldn’t run for 30 minutes on the treadmill, so for sure I would be able to do it.  I knew that on average, a slow runner like me takes a little more than an hour to run a 10K, so if my usual Zumba classes are an hour long and I’m sweating and making my heart pump like crazy during that one hour, I was sure I would be at least pull it off for the first half. 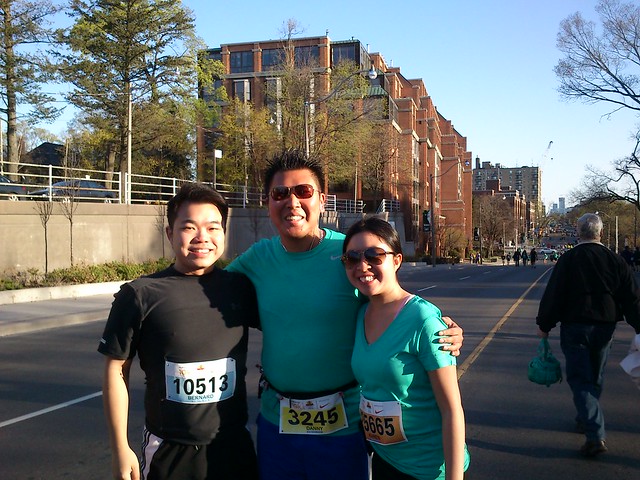 A picture before we started the run

On the day of the race, I met up with 2 fellow GenYTO individuals to take a shot before we ran the race.  Danny is a seasoned runner, registering to run 21 races this season (!) while Bernard was also a newbie 10K runner.  We got there early on a beautiful Sunday morning.  We honestly couldn’t have asked for better spring weather to run in.  The sun was shining bright.  There was not a cloud in the sky.  There was a very slight breeze.  The weather was PERFECT!

Bernard and I waited in the 8:20 a.m. blue corral start line.  There were so many people around us already.  We were to run in one of Canada’s biggest runs with over 21,000 people running with us!  It was quite the thrill.  I was excited overall but also nervous just before it was time to start.

Here’s a picture I quickly snapped while running! 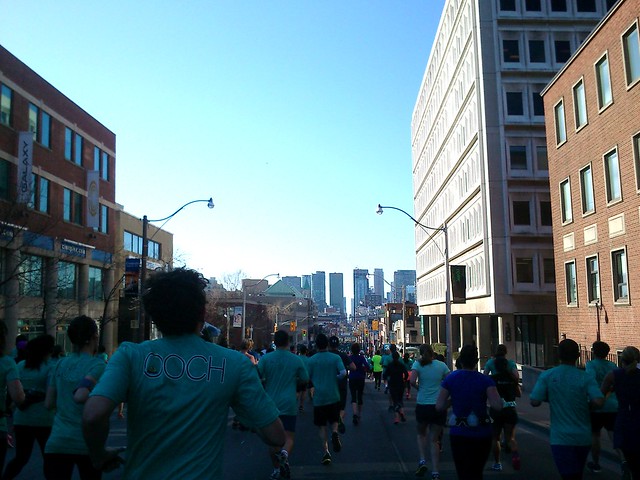 Look at all those runners!

It was cool and felt amazing to run with so many people at the same time.  Even though I had thoughts of walking, when I was there among so many runners, I never felt at all like I wanted to stop and walk.  I kept to my own pace of running which made the run very comfortable.  I wasn’t aiming to finish under a certain time.  I wasn’t aiming to be fast at all.  I just wanted to finish the race. 🙂

It was cute that because I stuck to my own running pace, I ended up falling in step with another girl who was running too.  Early on, we found each other and ended up running next to each other out of pure serendipity.  After 5 minutes of still running together, I wondered if we would actually run the whole race together side by side.  It turns out we did as we exchanged a mighty handshake and high five as we crossed the Finish Line together.  I chatted with her; her name was Alissa, she told me it was her second time running this 10K and that she was hoping for a running partner in the race.  What a coincidence!  I ended up being her running partner by chance. 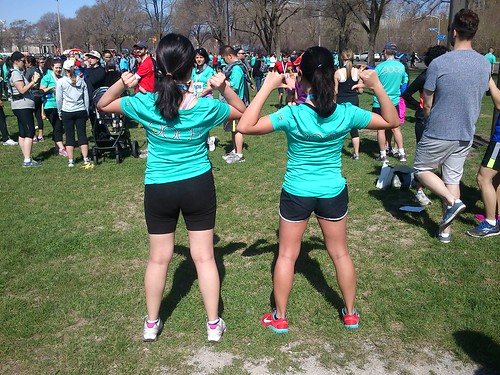 One of my favourite parts of the race was seeing all the streets pass by one after another as we jogged south towards Lake Ontario.  The busy intersection of Yonge & Bloor came up a lot faster than I realized, and at which point, I knew I would be able to keep running towards the end.  I didn’t stop at all and kept on going.  It also helped that I was listening to my MA audios which are full of inspirational speakers, leaders, and successful entrepreneurs.  It made the run a lot more interesting and I was learning while jogging too lol.  Keeping my body and my mind sharp!  It really is about mental toughness and not wanting to give up.  I stuck to my goal of finishing the race and I did!  I ran all 10K of it!  I still can’t believe I did it and it was amazing to cross the finish line.  There were so many people cheering for us!

We celebrated by taking more pictures and admiring how well organized the event was.  For such a big event of having over 21,000 runners, Sporting Life sure did a great job! 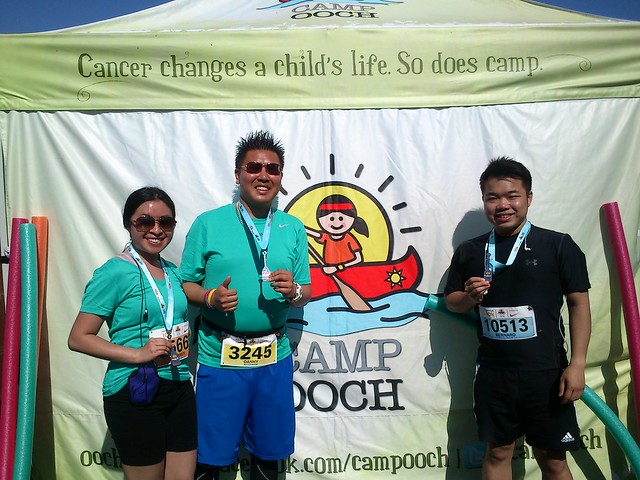 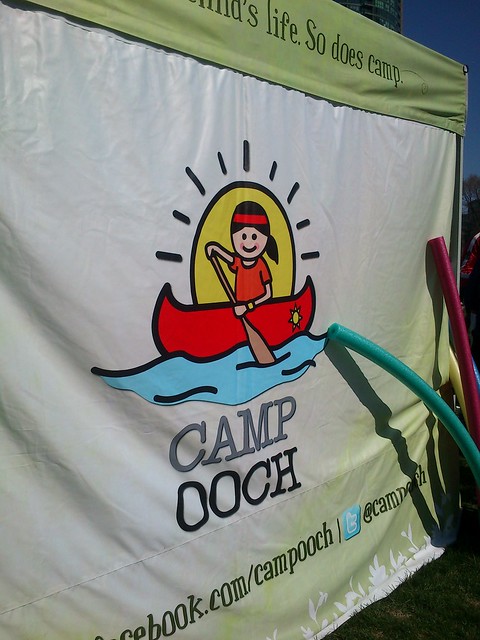 The proceeds of the 10K ran benefits Camp Ooch (they provide an active, outdoor experience for children with cancer and also offers chemotherapy treatment onsite). 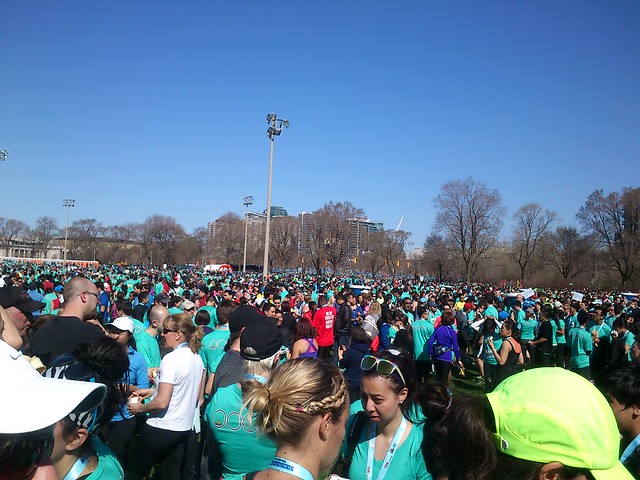 Look at all these runners who completed the 10K! Congratulations, everyone!

I also know that many of my friends participated in this year’s Sporting Life 10K run as well!  I bumped into two elementary school friends and also knew of several others that were doing the race as well even though I wasn’t able to meet up with them.  Facebook later informed me of more friends that completed the race too.  I’m sure that I’ll be doing this again next year.  I always say that if I’ve done something once, I can definitely do it again! 🙂  Congratulations to everyone who completed the 10K this year!