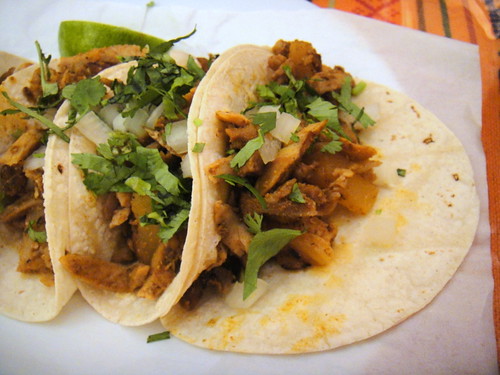 Located at 277 Augusta Ave in Toronto

I’ve been meaning to try this Mexican tacos joint and finally had the chance to recently.  Helen and I didn’t expect the small restaurant in Kensington Market to be so popular!

We arrived here on a dark and chilly October Saturday night.  The inside of El Trompo is small and the tables are pushed together.  Nevertheless, it was a lively atmosphere and still conducive to good conversation despite the close seating.  We were informed that we would have to wait for up to 15 minutes to get a table.  During this time, we looked around at the restaurant and the menu to decide what to order.

Their turnover of customers is fast as their food is made quickly at the front of the restaurant.  We didn’t have to wait more than 5 minutes to sit down.  Yay! 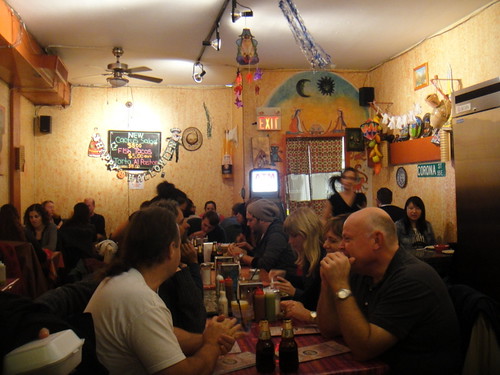 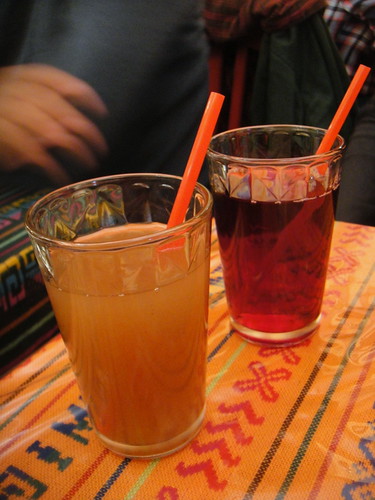 I was very excited to try the food.  The menu had a solid list of tacos, burritos, quesadillas, and breakfast items.  I selected a fruit drink to start.  For a small size for $1, it really was smaller than I thought but it paired well with the food we were about to eat — it was a little sour to offset any grease.

Helen and I ordered two tacos to share: pork and chicken with the cilantro requested on the side.  I really liked the chicken taco that Helen chose.  It was a bit saucy and less dry than the pork tacos.  There were five on each plate. 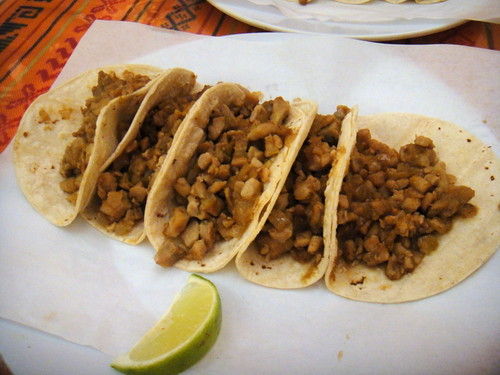 Al Pastor $9.75
-our specialty. Mexico City style tacos. Pork meat marinated in the traditional sauce. Served on corn tortillas with pineapple, coriander, and onion
(pictured without and with coriander) 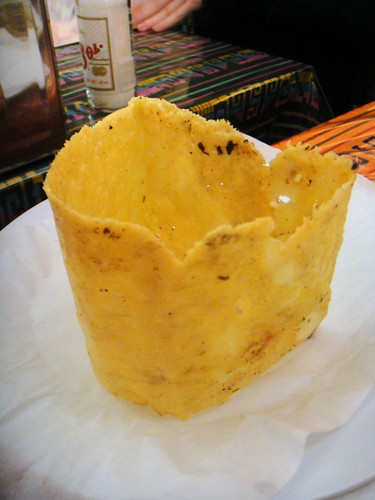 Chicharron de Queso $3.99
-delicious crispy fried cheese. This is not a sandwich!

We also ordered an appetizer, fried cheese.  It had a ‘warning’ on the menu that this wasn’t fried cheese sandwich which made it even more appealing to order and try.  It arrived ‘standing up’ on the plate and was indeed a flat piece of cheese that was fried.  How interesting!  We ate it piece by piece with our hands.  It was only a little greasy and very chewy and cheesy.  It was definitely something more interesting than just guacamole. 🙂

After the cheese, it filled us up.  However, I was still itching to try something else.  So I did! :’D.  I ordered their fish taco that was $5.  This was a much bigger taco than the 5 small ones we had at first. 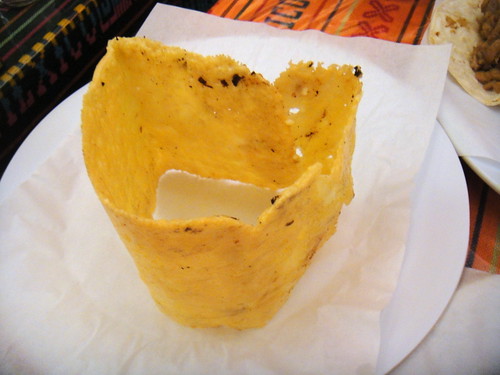 Another view of the interesting cheese 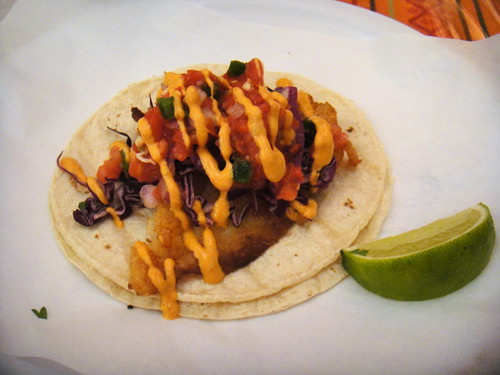 The fish was fried too much to a crisp and the fish meat was hard.  The sauce made it spicy and there was a lot of filling to it.  If the fish wasn’t overdone, this taco would have been amazing!

Last but not least, we couldn’t leave this Mexican restaurant without trying their churros.  They only serve churros on the weekends which made me feel very lucky that we visited on a Saturday. 🙂  The churros looked so good even when we were waiting for a table that we just had to try it. 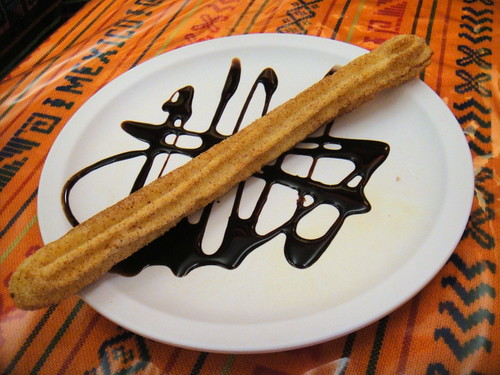 Churros $2
-traditional Mexican pastry made out of wheat flour, sugar and cinnamon, garnished with chocolate sauce

We ordered one churro to share.  Good thing we only ordered one!  The long, fried Mexican treat was served on a plate.  Unfortunately, it was very bad.  It wasn’t hot, wasn’t soft — too hard — and wasn’t tasty.  From the moment we used our utensils to split apart the churro and had diffculty pulling it apart, we knew something was wrong.  This was so disappointing.  Up to this point, the best churros I’ve had are from Frida. 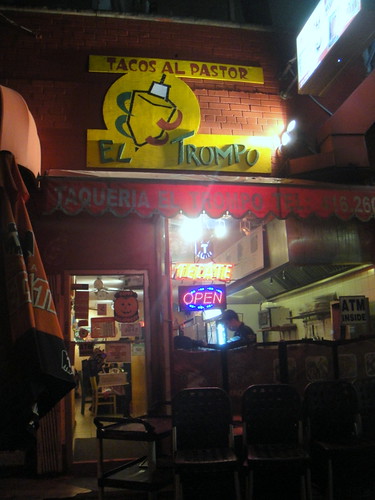 I’m very glad that I got to try out El Trompo.  Would I visit again?  Maybe!  They still have a lot of other Mexican specialties to take my taste bites on a ride for.  Have you been here before?  🙂

I visited El Trompo again for a semi “reunion” with two university friends, one who was visiting from working from South Korea.  We arrived on a Tuesday evening and unlike last time when I visited on a Saturday night, there were barely any other customers inside the restaurant — only three including our table.  (Maybe because it was winter and people prefer to stay at home… or could it be the bad economy?)  Nevertheless, we ordered our own portions of food and service was fast and efficient that night. 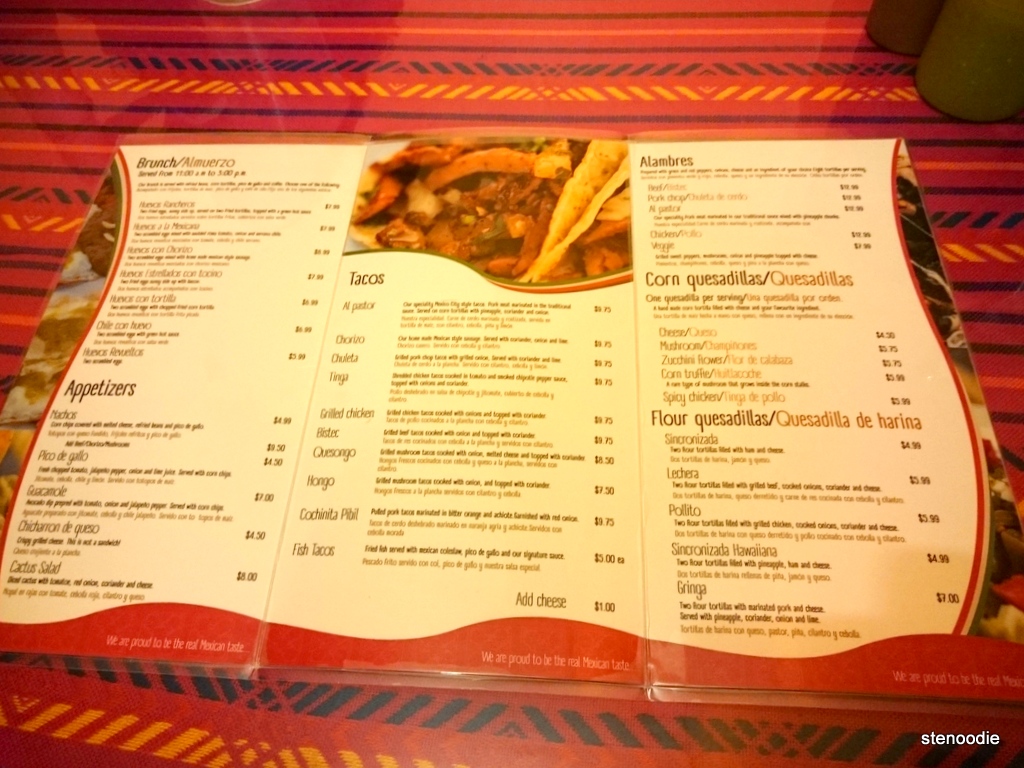 They have updated their menu from paper to a laminated version! 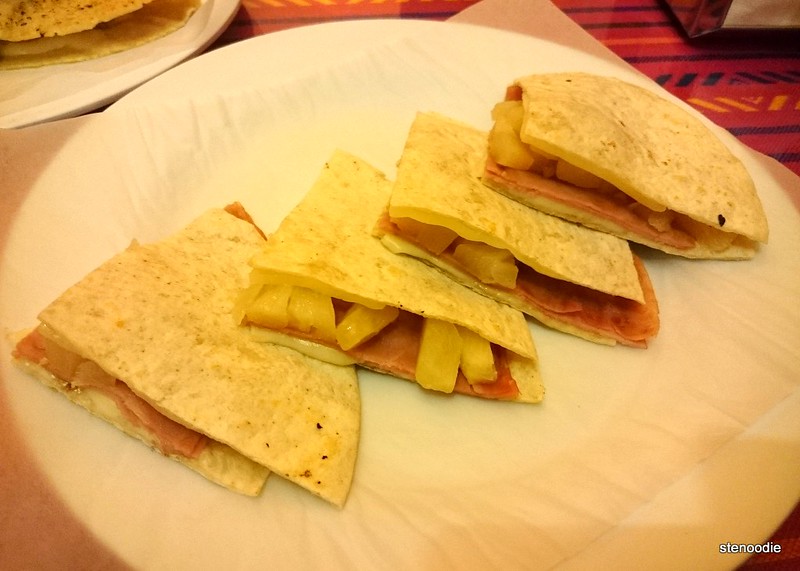 I tried their tacos last time so I wanted to try their quesadillas this time.  I chose the Sincronizada Hawaiiana which was a flour quesadilla with pineapple, ham, and cheese.  To my disappointment, it was a really bad quesadilla.

It arrived cut up into four sections and lined up in a row (usually I’ve seen them cut into fours from a circle).  The flour tortilla was dry, the pineapple appeared to come from a can, the ham was just regular ham from the supermarket, and the cheese was barely melted.  The lack of warmth of the quesadilla made me think that it was assembled and then thrown into the microwave too.  Ick.  It was only $4.99 thankfully.  Even then, this was probably one of the worst choices to make from their menu.  I should have chosen something more authentically Mexican that included ground beef or chicken with cilantro since I was in a Mexican restaurant….

Val got the Zucchini Flower and Corn Truffle Quesadillas.  They didn’t look plump or amazing either…  She enjoyed them though which is what matters the most!

Corn Quesadilla: Corn Truffle (Huitlacoche). $5.99
-a rare type of mushroom that grows inside the corn stalks 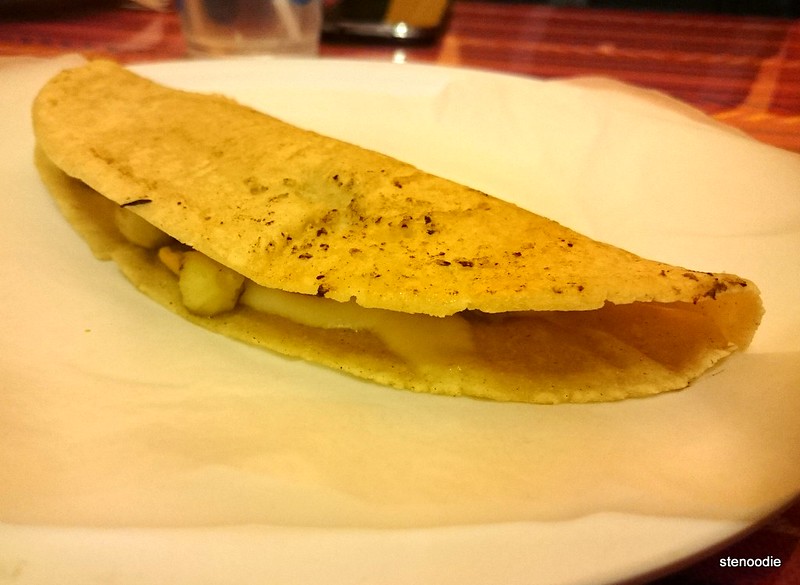 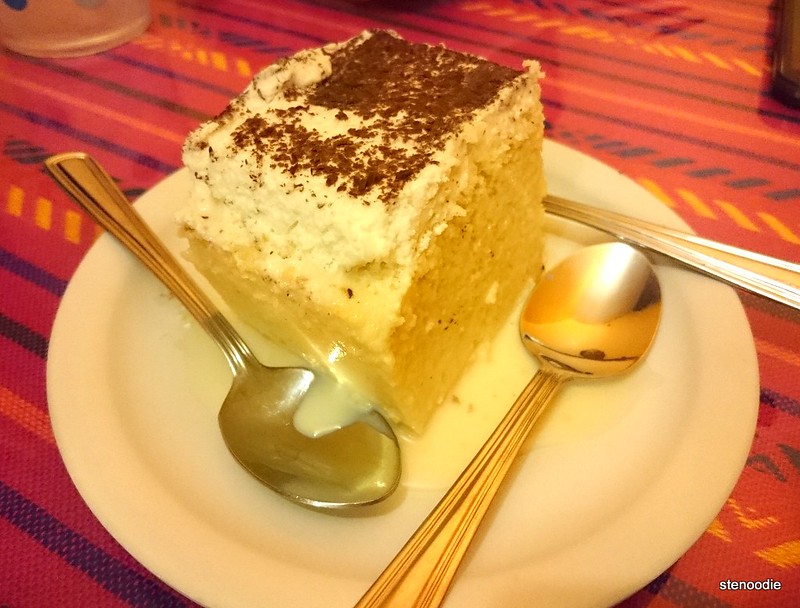 To finish off our meal, we shared their Tres Leches cake among the three of us.  It was a decent portion and it was a little crumbly (not the most moist that I’ve had) but still not terrible.  The cake was a good finish to the night, I have to say.

Thus, after this second visit, I’m not that impressed or confident about their food after all…  I know they are supposed to be an authentic Mexican restaurant, but I really think that they could make heartier portions that look and taste better.

Have you been here before?  What do you think? about El Trompo?